Last time we were in Melbourne (for our late Easter celebration) we planned on going to the beach with Kye but I didn’t feel well so we ended up napping instead. This time we were going to the beach for SURE! We decided to go between lunch and Kye’s 1:00 nap as we had to shower and get ready for Susi’s graduation that night. That gave us about an hour to enjoy the beach as a little family and I figured Kye would tire of it long before that hour was up. Well I was wrong!

I didn’t really expect much out of our little beach outing. I assumed Kye would be okay with the whole thing because he did so well last summer with it, but I also know that around this age kids start developing fears so I worried he might be afraid. I know all the little kids I see on tv (like I remember an episode of Jon and Kate Plus 8

) seem to be terrified of the ocean. The sand is sticky and hot, the waves are big and loud, and the whole environment is just different! I can see how it’d be a scary experience for sure!!!

While I expected some fear, I NEVER expected what actually happened. Kye was all about it ALL!!! Now that he’s a walking kid he was all about testing out his walking skills in the sand. None of the sand bothered him one bit and he would stand up, take a few steps, and fall back down just to get up and try again. He kept saying “ugh oh” whenever he fell which was adorable.

heading out to the waves 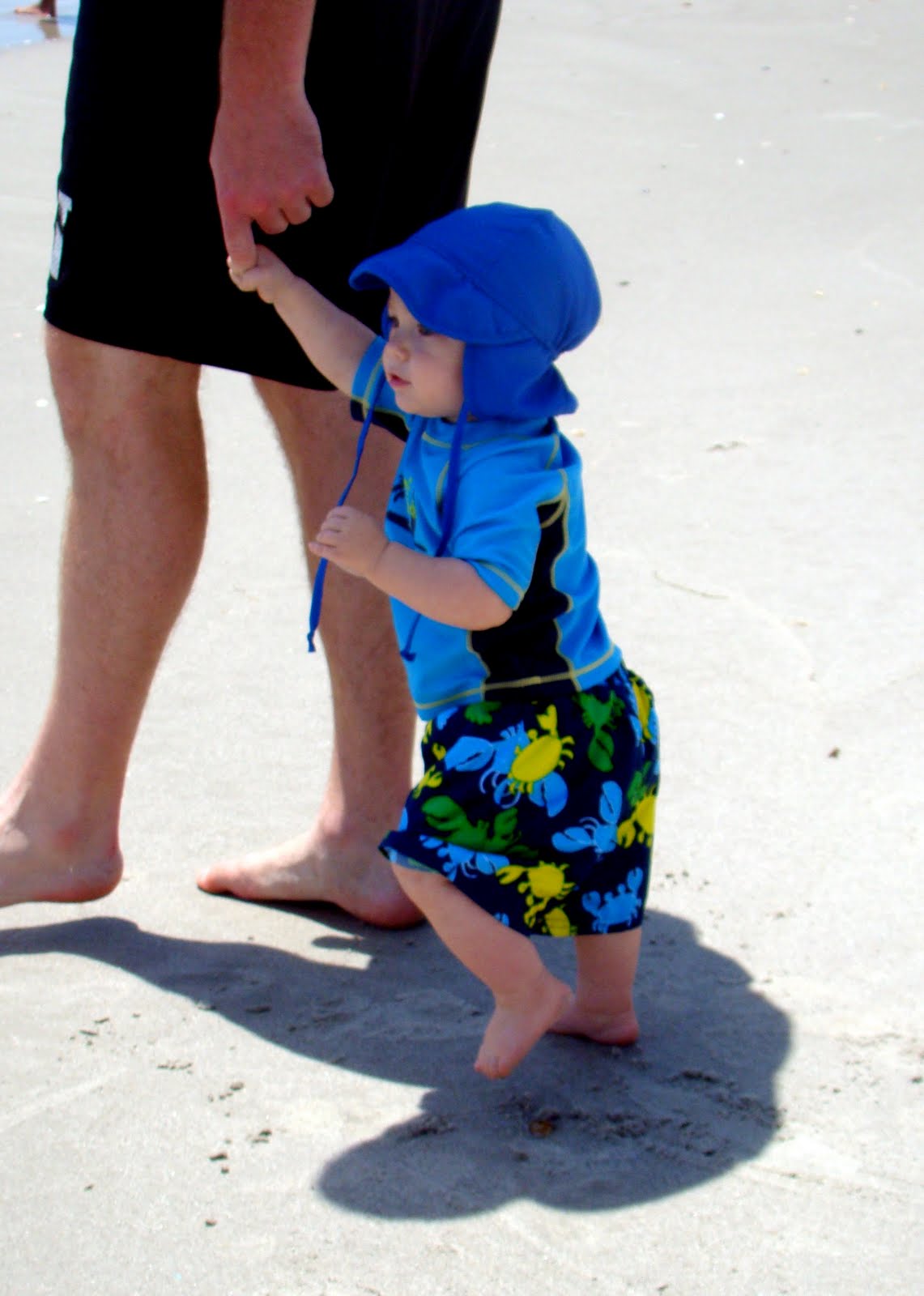 I love pics of him walking holding our fingers 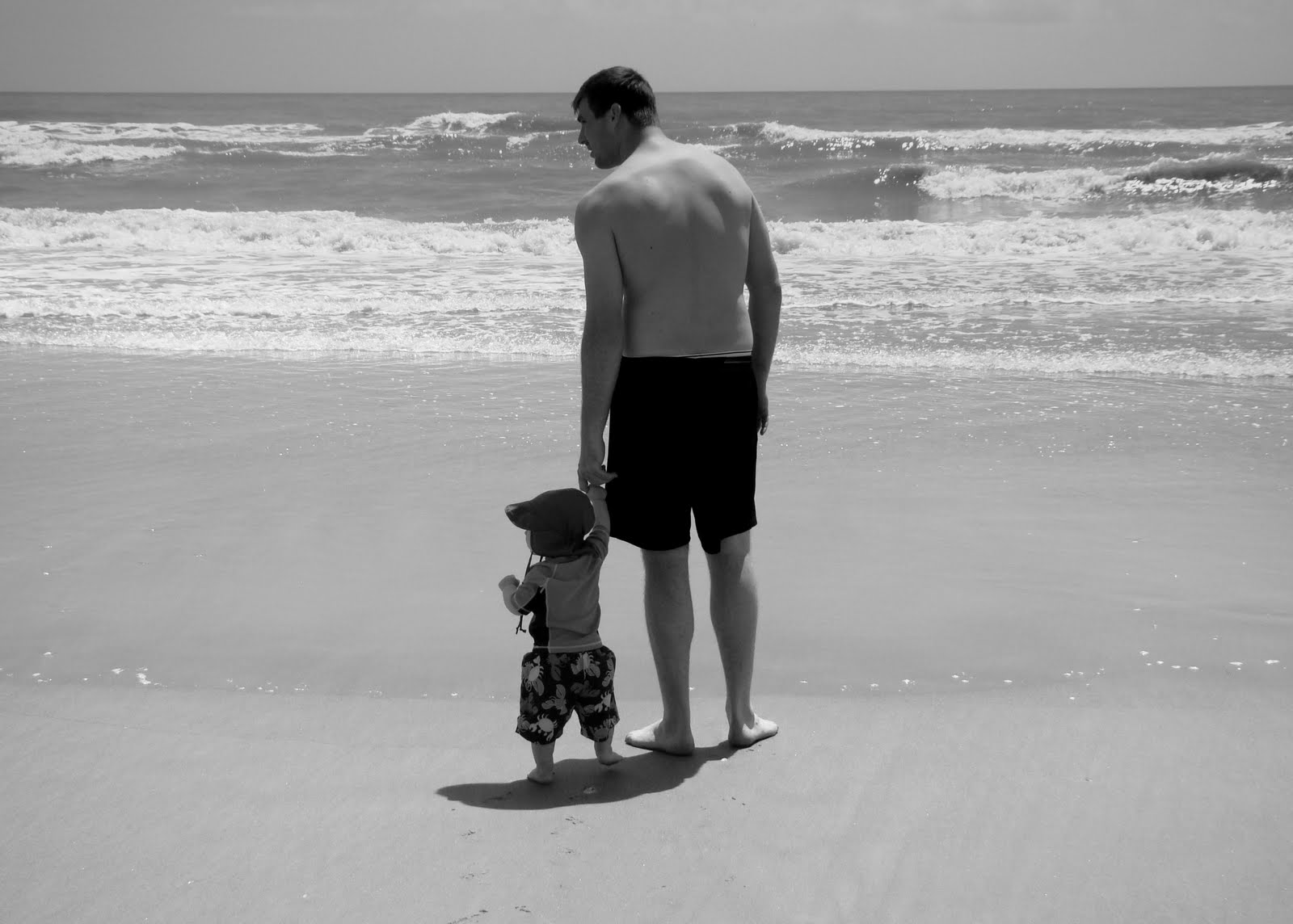 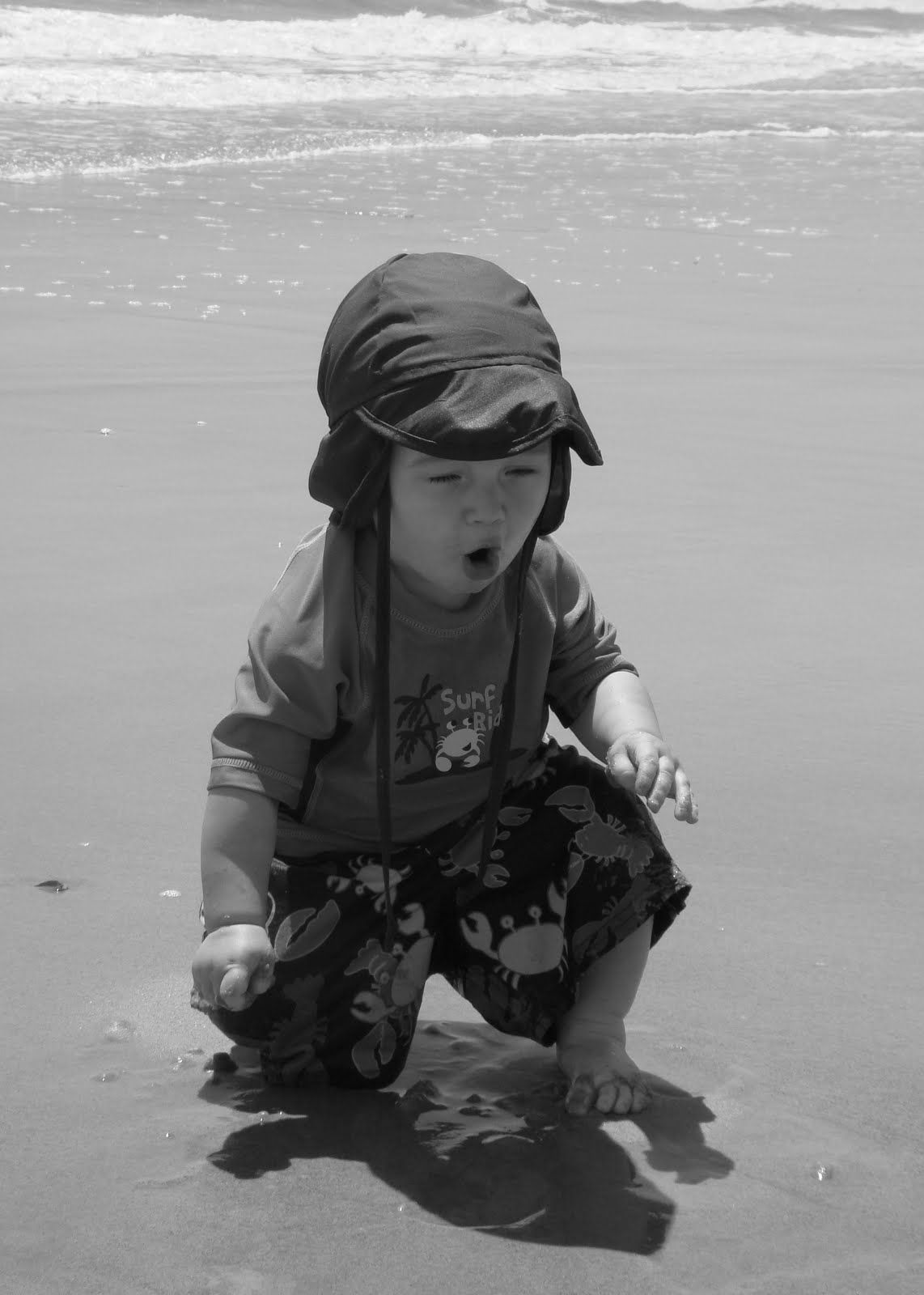 Then came the water. He LOVED it. Not just enjoyed it, he literally loved it! While most kids his age run FROM the waves Kye was running towards them!!! He laughed and laughed when they hit him and even knocked him over. One time his whole face went under the water and he thought it was hilarious. Zach took him out to “deep” waves and he cried and cried when it was time to come in. When we just let him down and let him go on his own he crawled or walked towards the waves every time. We had to keep stopping him from going too deep! I know many of you probably don’t bother watching the videos I put up, but these two are seriously so cute!!! In this video he’s running towards the waves while holding onto Daddy and in this video he’s trying to walk on his own out there but ends up crawling instead. Seriously two of my most favorite videos of him ever! Seeing him having so much fun makes me SO happy 🙂

so happy in his element 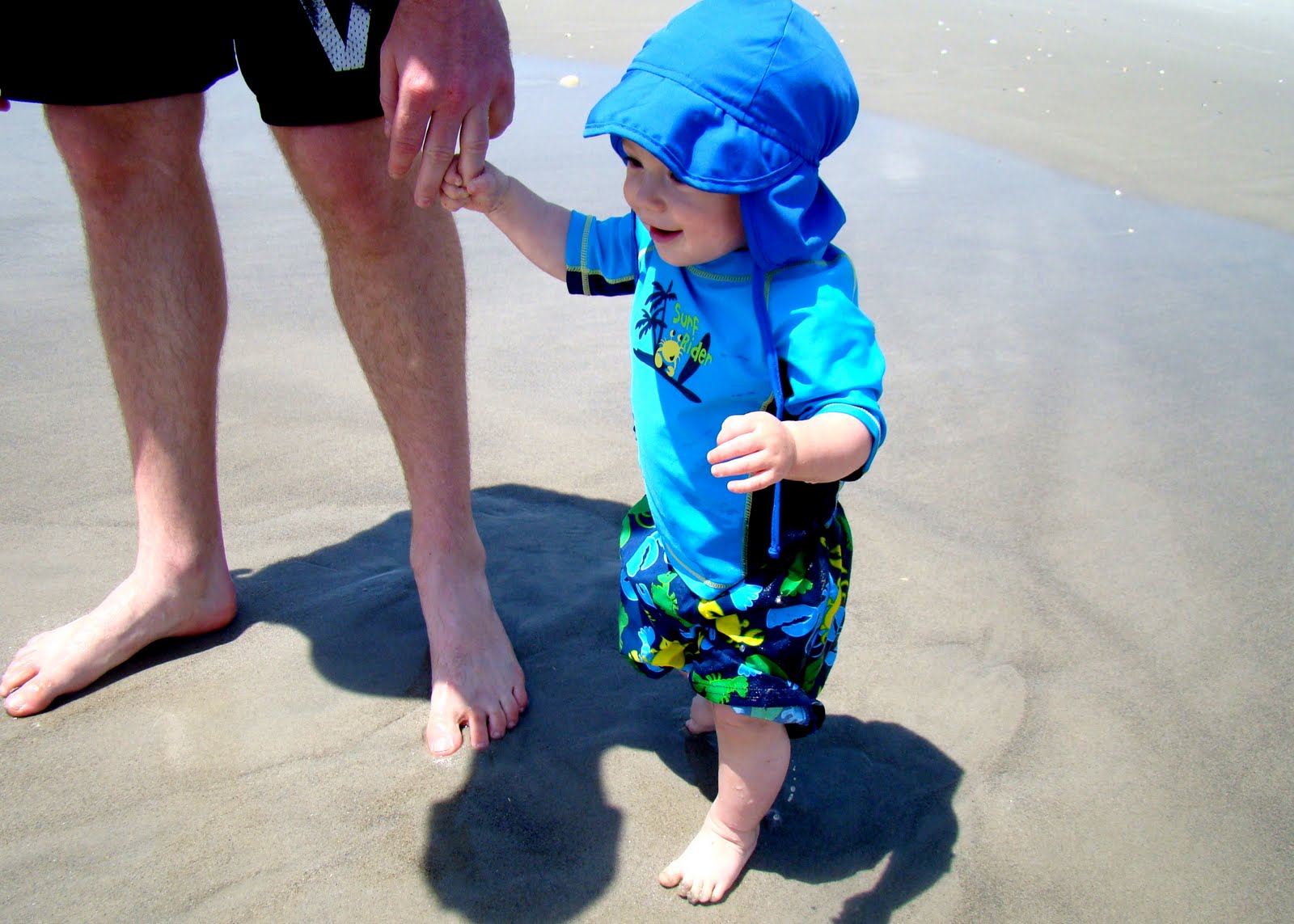 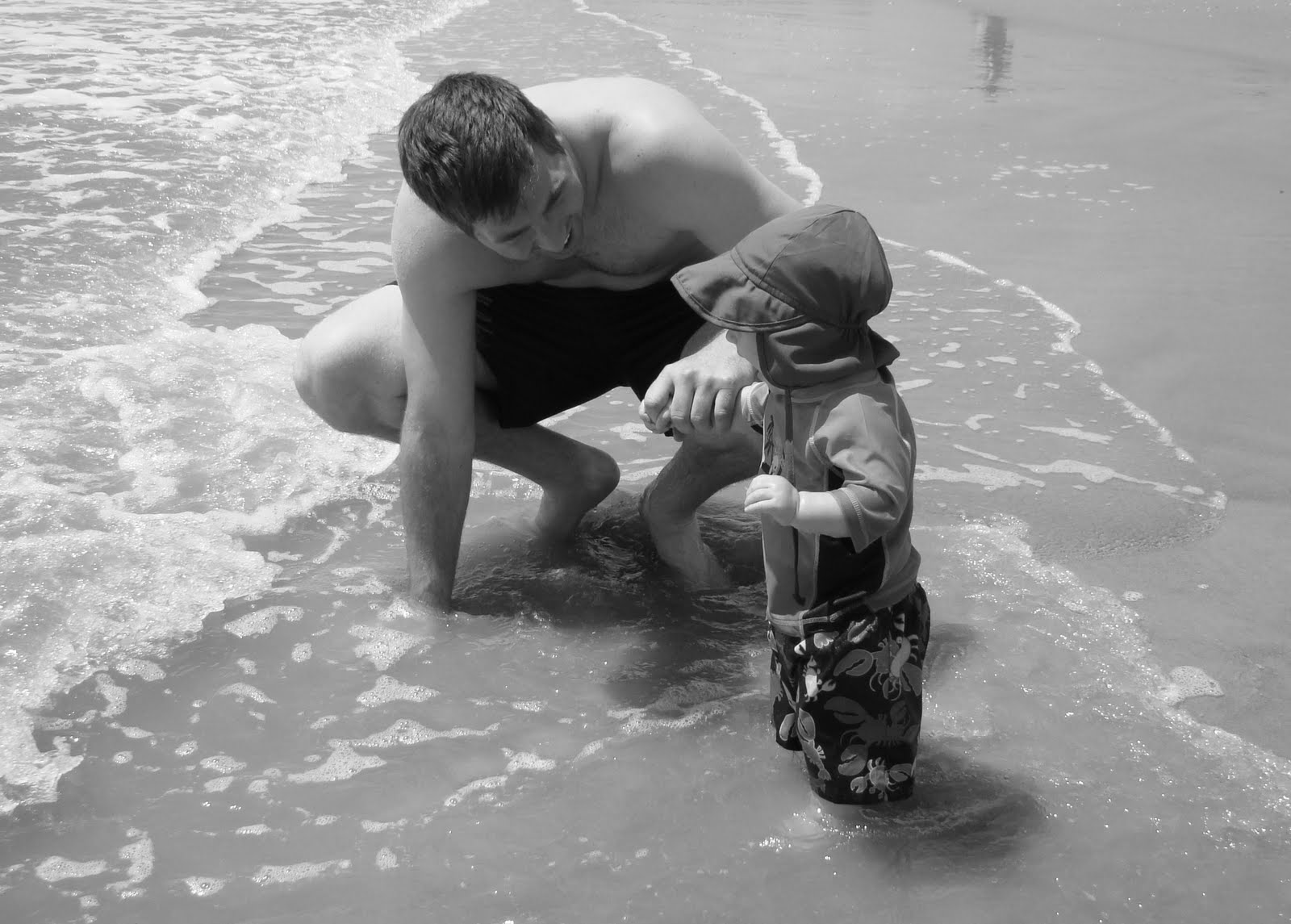 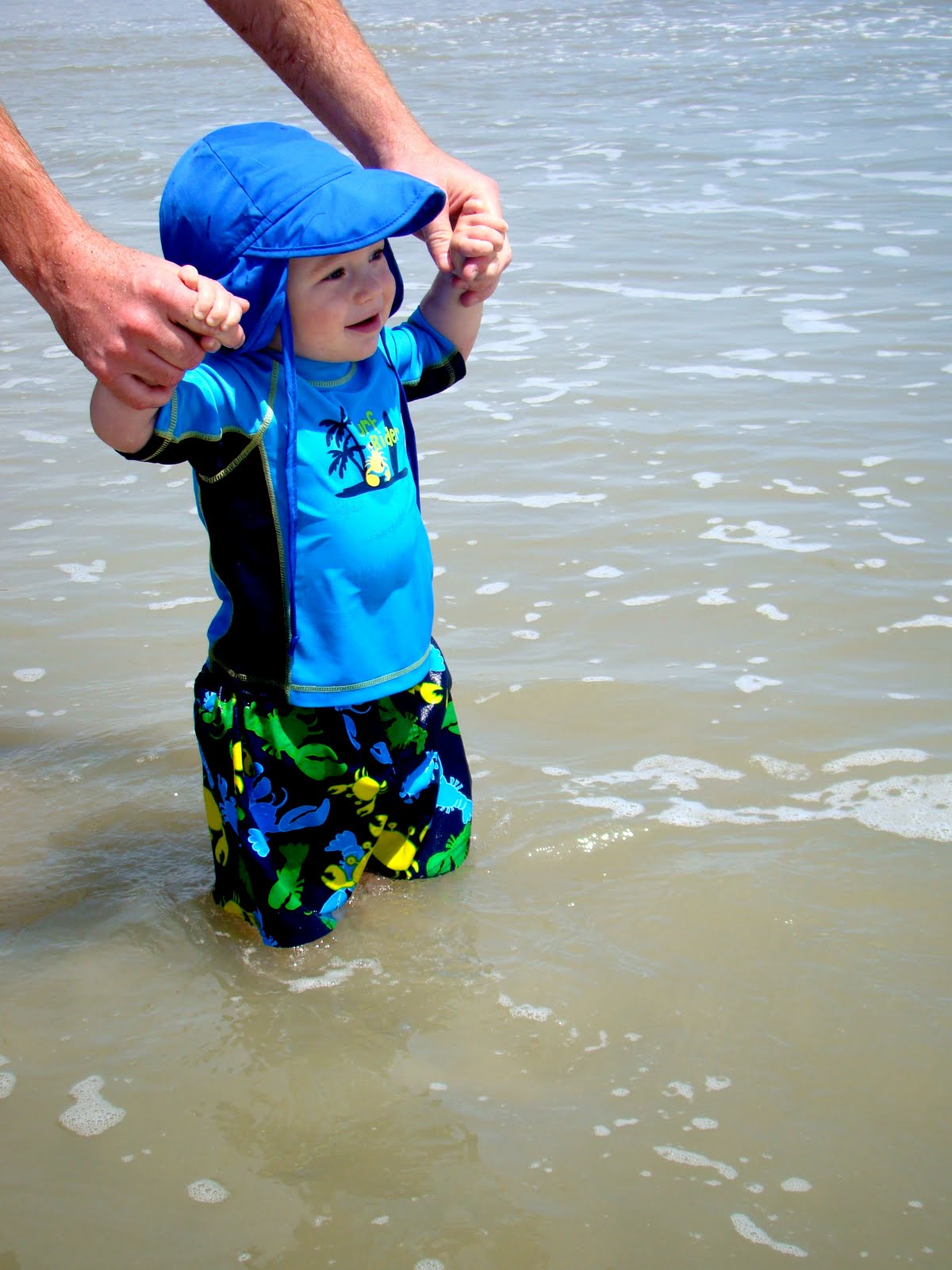 It was SO precious to see him having so much fun and it made me SUPER pumped for all our beach trips this summer. I wish we lived closer to the beach so we could go more often! It also helped Zach see the value in us having a pool in the backyard as we have a child who adores the water 🙂 I wonder where he got that? Zach and I had a great talk about the importance of getting out of the house and letting our kids experience life and the world around them. Sure seeing a picture of a bird is great but Kye got to see two birds running and flying around the beach which was so much better. Same with boats. Kye got to see a fishing boat out on the water which was much better than him seeing one in a book. Hands on experiences are so important and I’m thankful that Zach and I both see the value in them!

watching a bird flying over the water 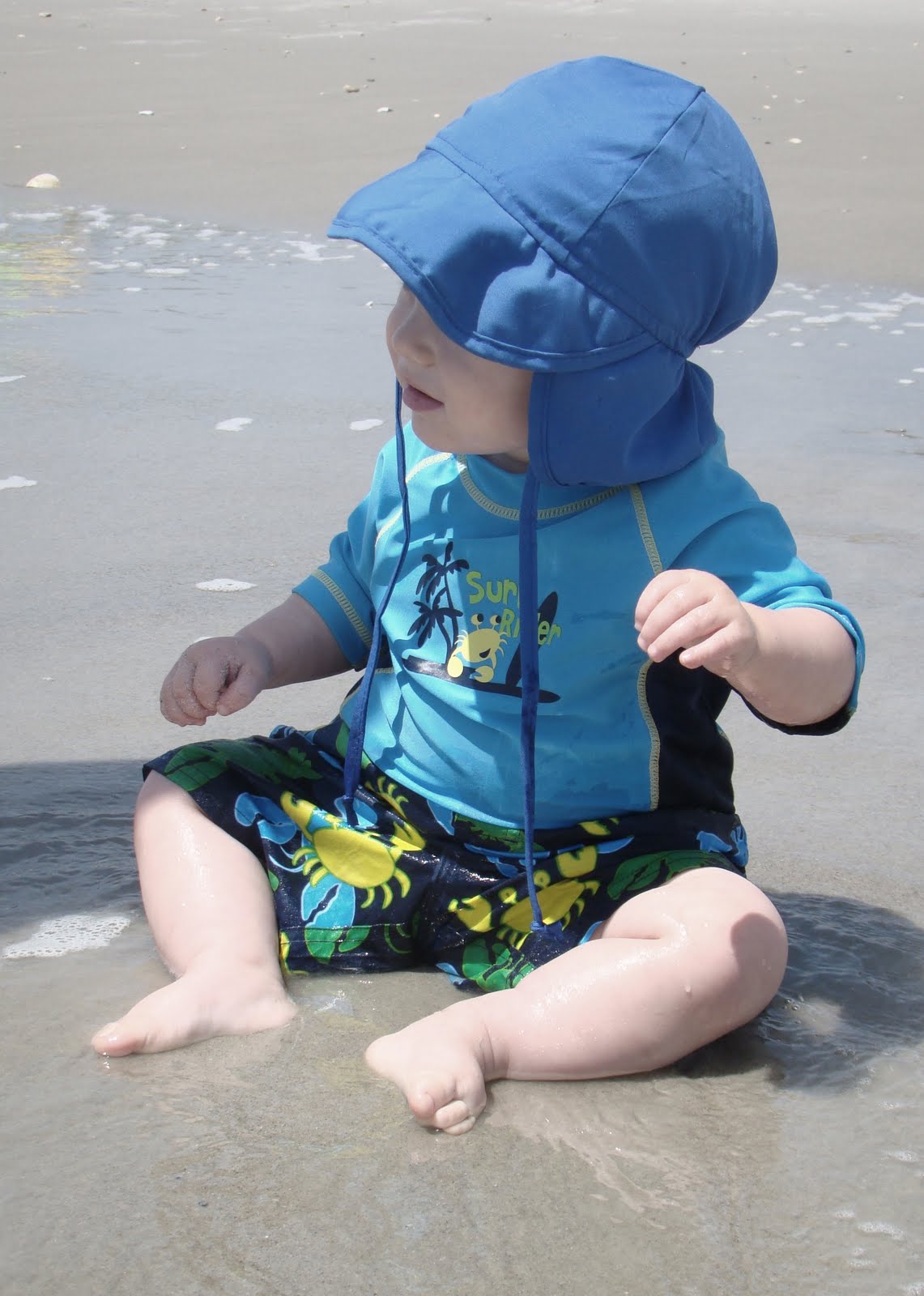 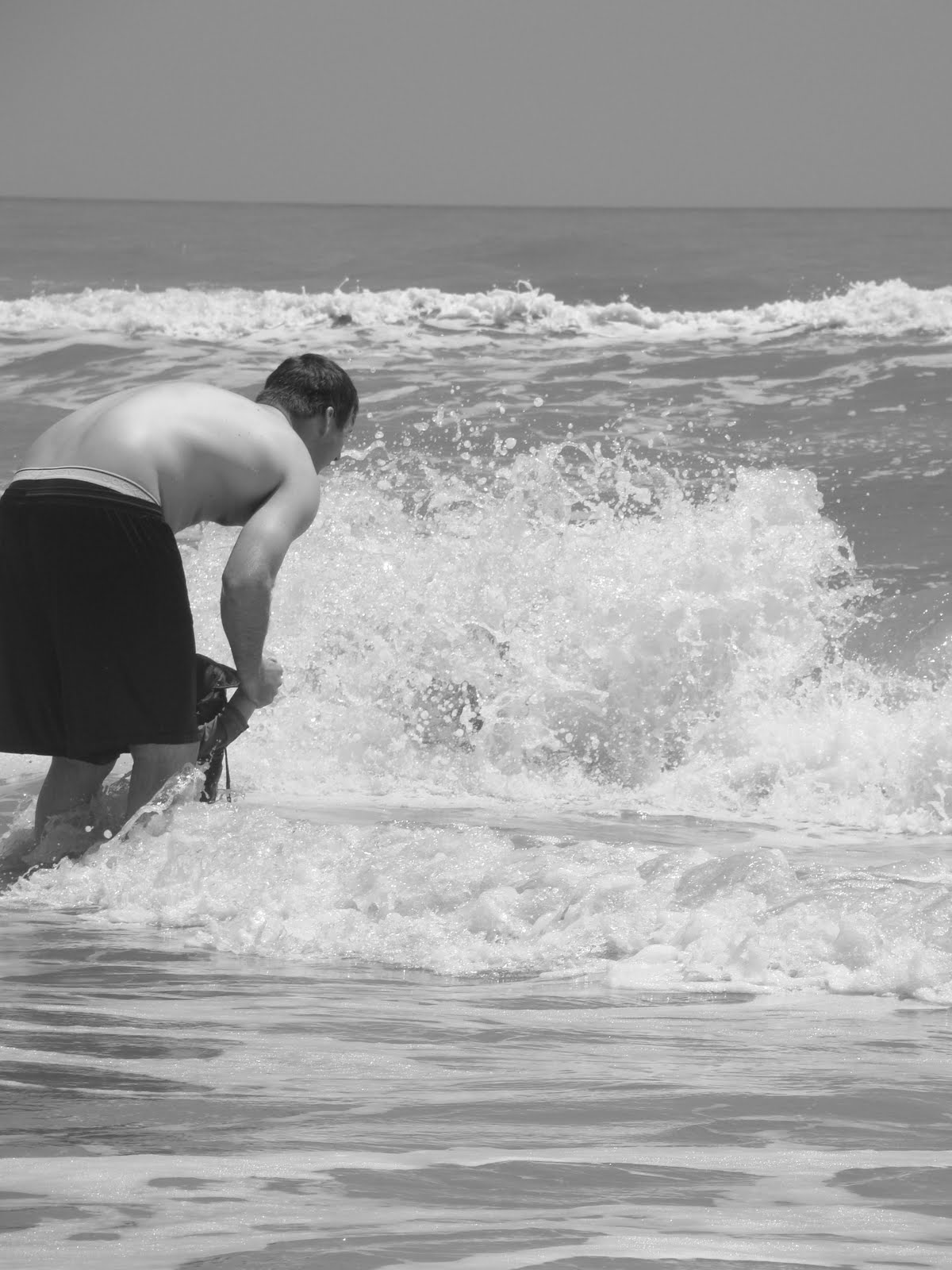 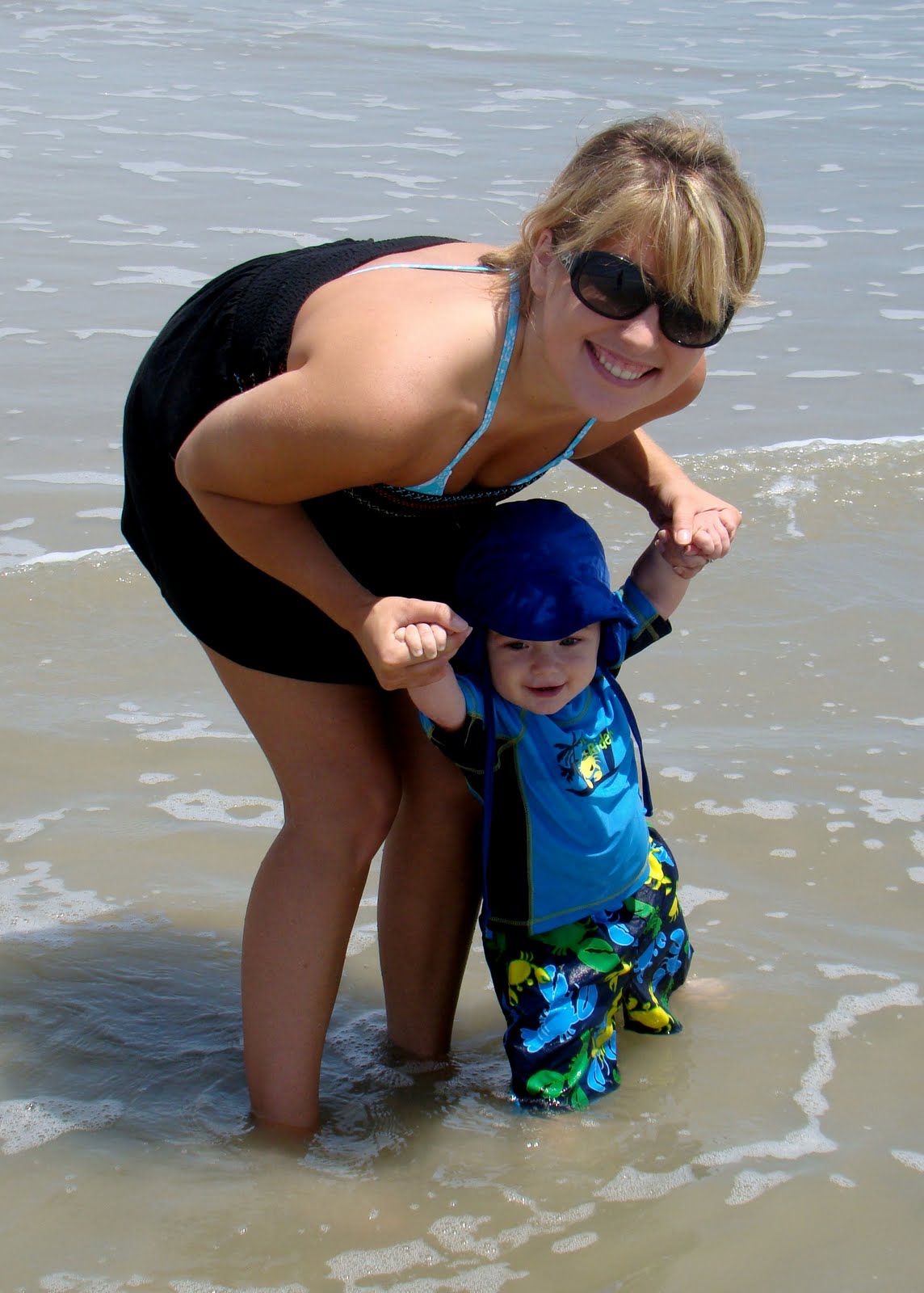 We had the BEST time and Zach and I just couldn’t get over it. We were very happy parents with an extremely happy child. A couple on the beach actually stopped Zach and told him they enjoyed watching Kye so much and that they’d never seen a child so fearless around the water. We wished we could have stayed all day!!! 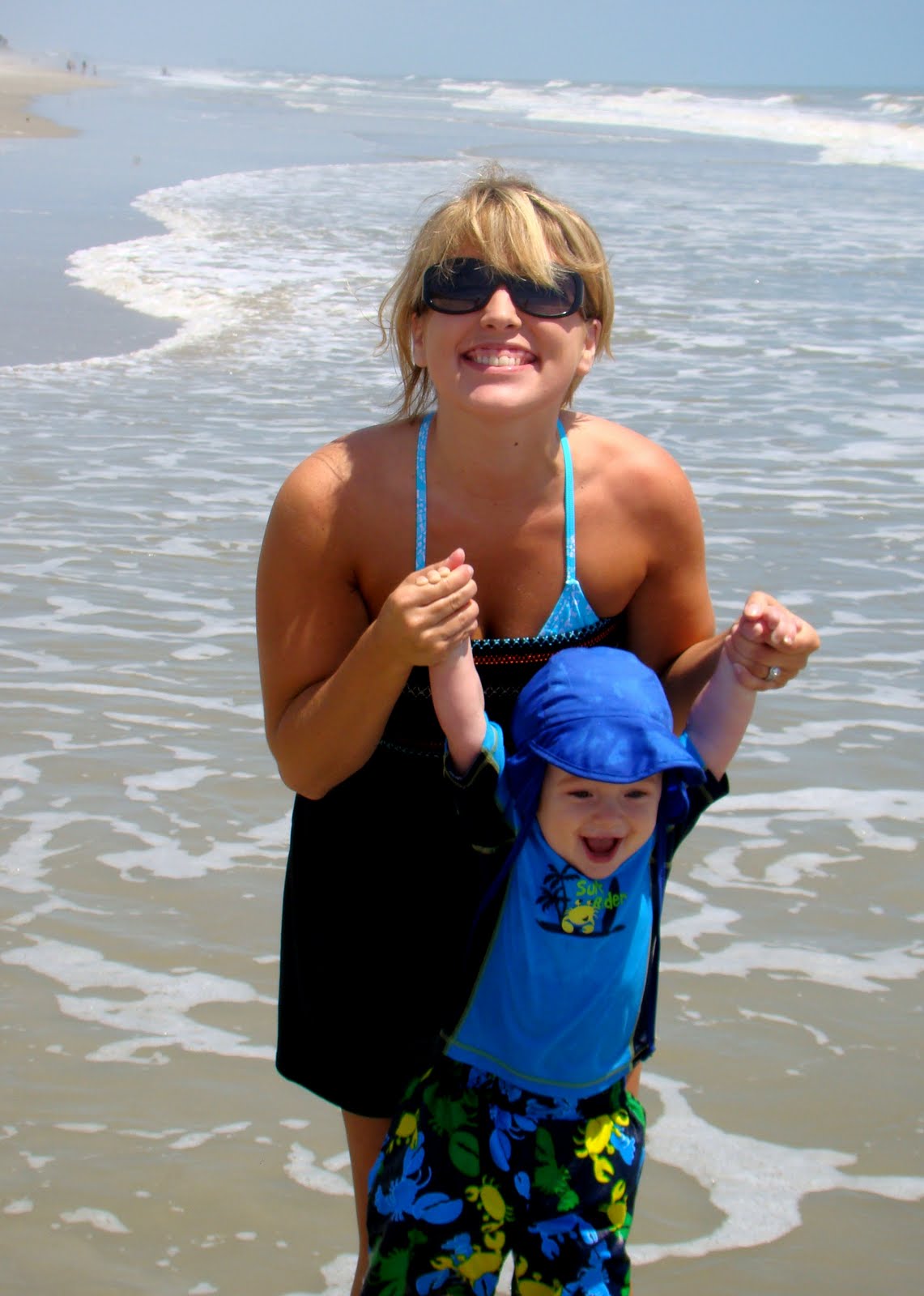 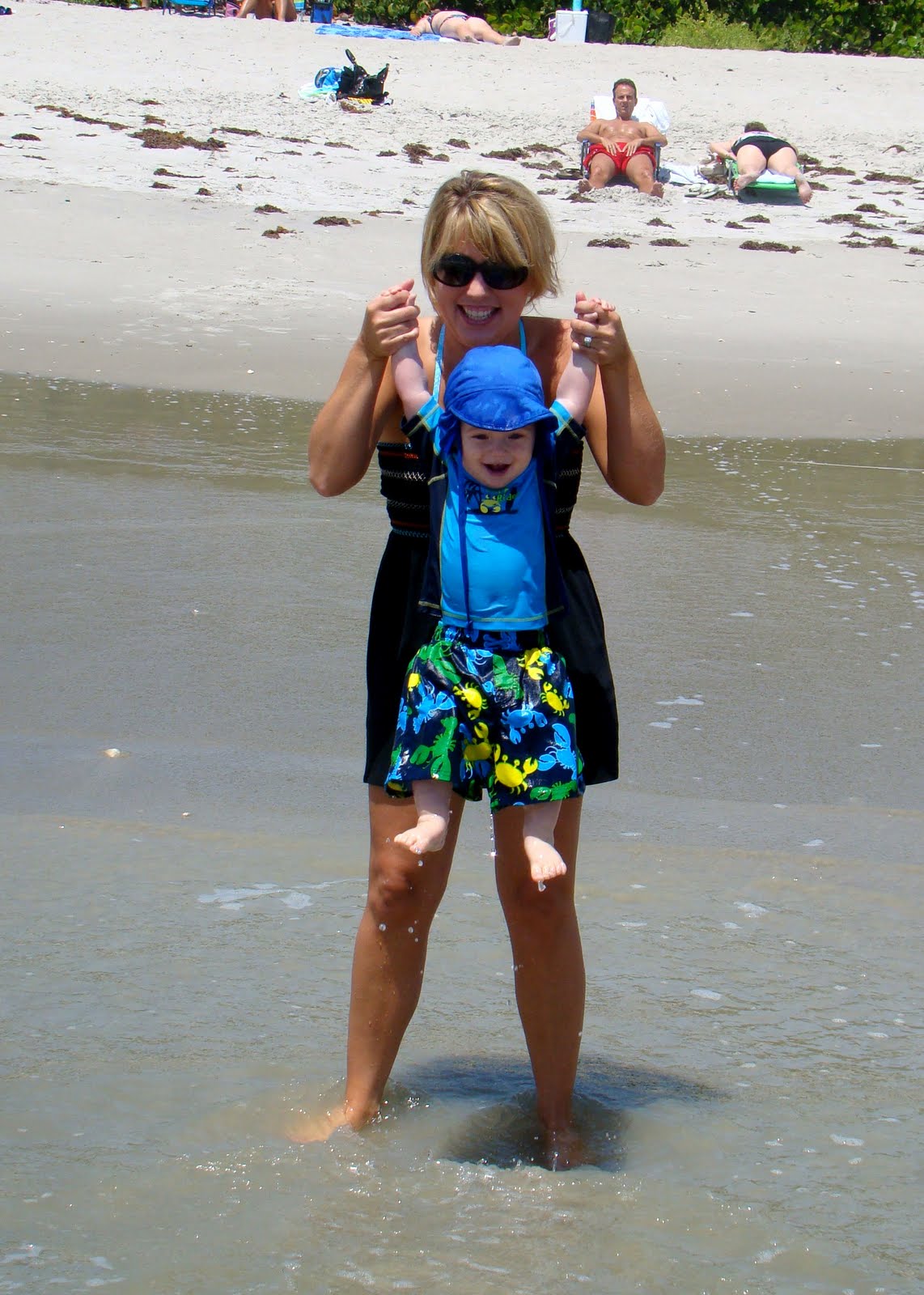 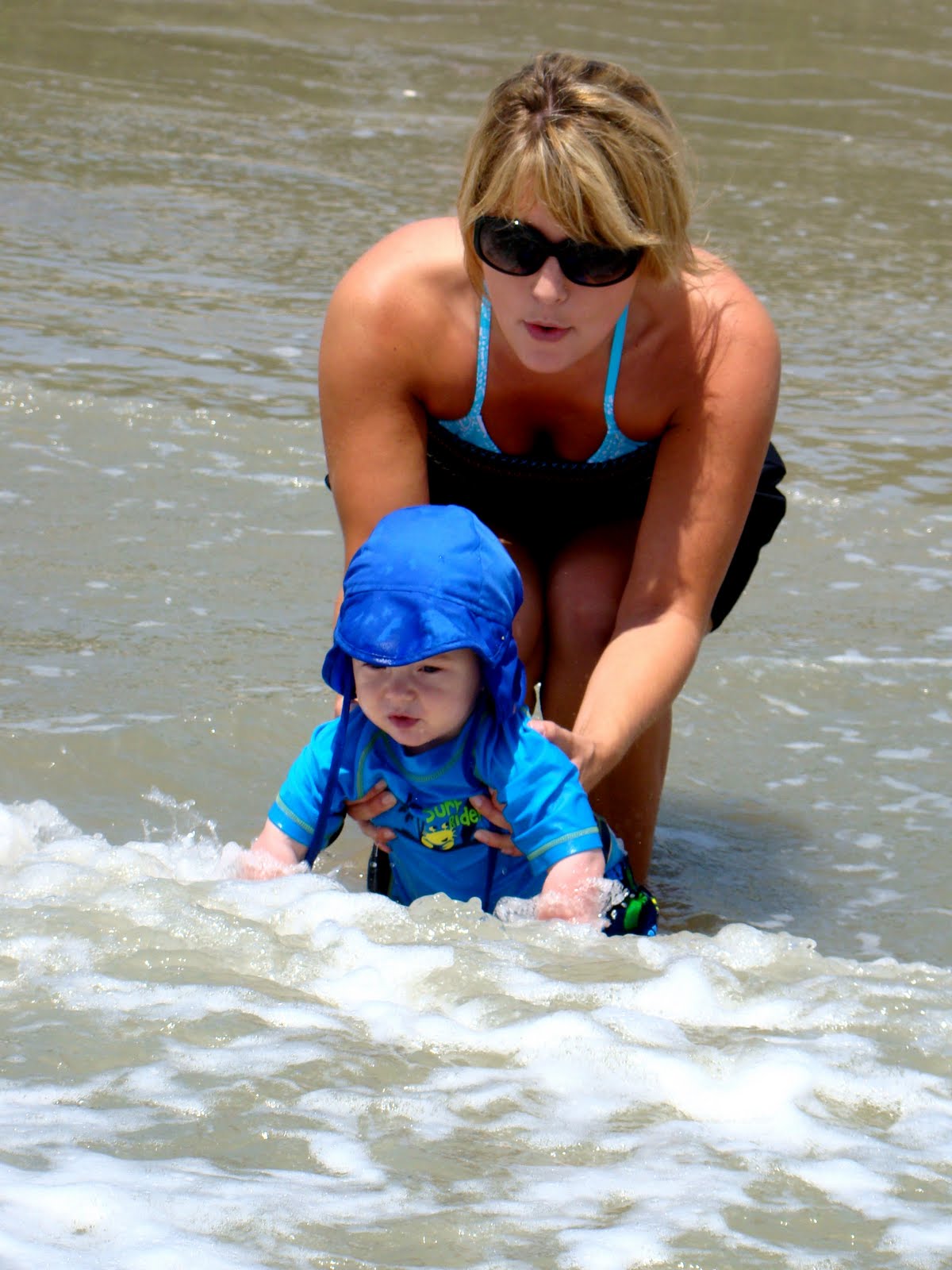 While it was SO fun it did make me nervous too. Having a fearless kid is fun and adventurous but it’s also dangerous. He really would have gone out to sea if we weren’t watching him. Last summer we used a float

for the pool to put him in but I just don’t see that working this summer. I know he’s too active to just sit in some baby float and I can just picture myself struggling to hold on to him while he squirms out of my arms to “swim” on his own. I’m debating on what to get him though for the water…any recommendations? I’m leaning towards this as it got great reviews and I think he’d be able to use it long term. But this also looked pretty good.  They are both on sale so maybe I should just get one of each? We plan to have several trips to the beach, to hotels with pools and I hope to hang out with Robyn at her mom’s pool and at Ashley’s pool too! Plus we hope to have a pool of our own by next summer so I need something for sure! I don’t want to do floaties

as they all say ages 3 and up and I feel like they don’t really help him learn to actually SWIM. Any advice would be much appreciated!!! Enjoy more pictures of my favorite beach boy 🙂

playing in the water 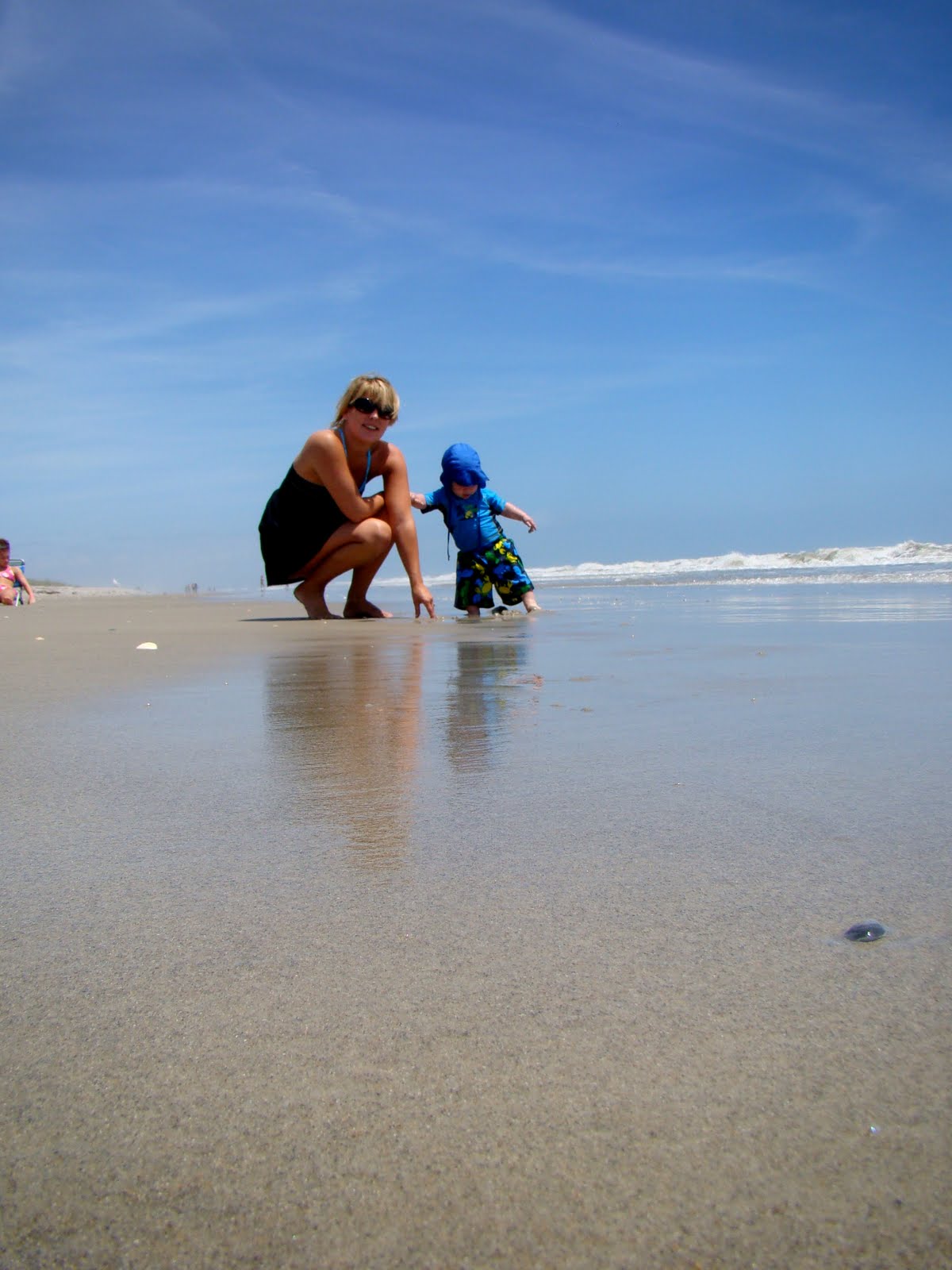 big boy standing up on his own 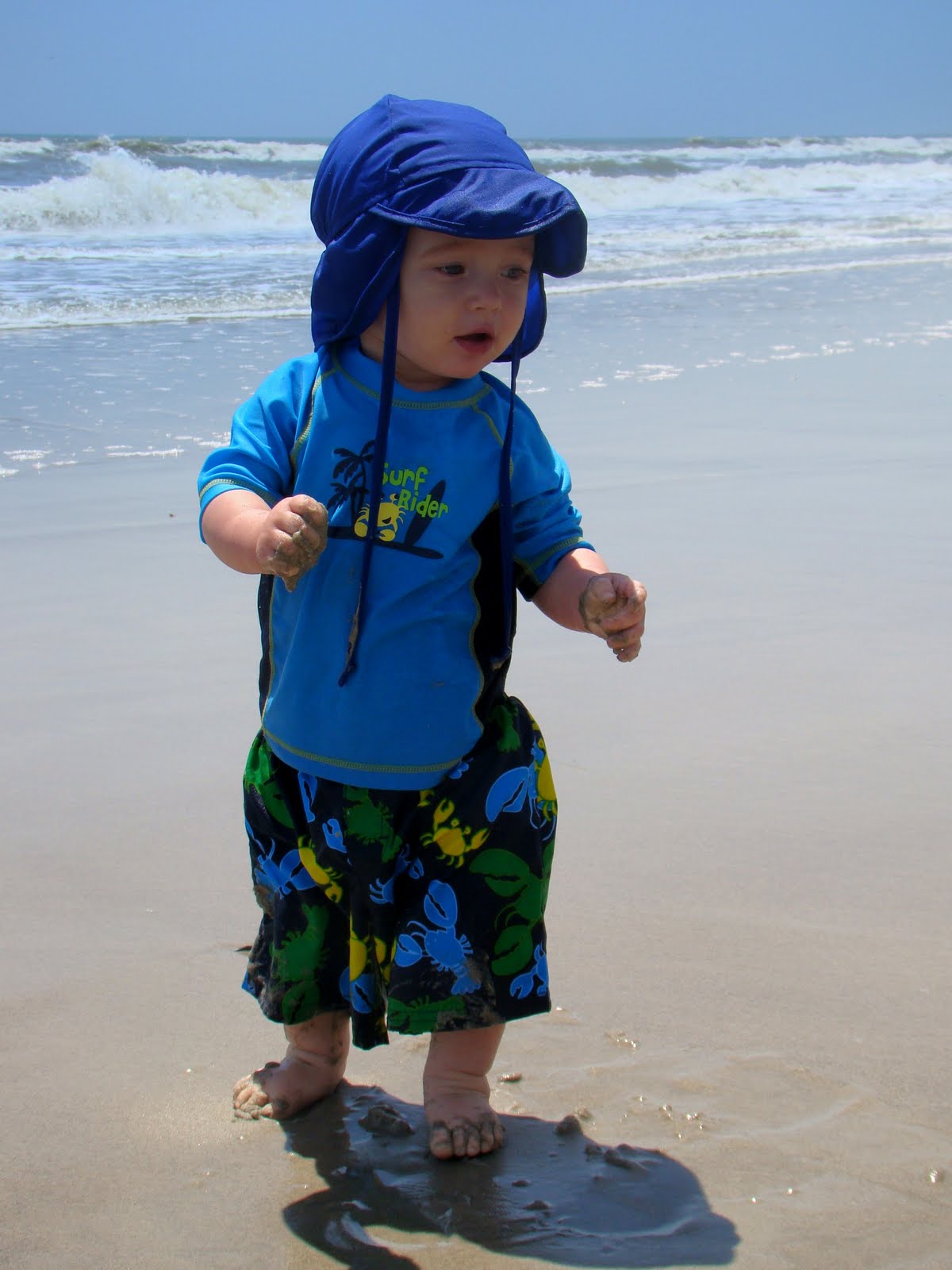 making a “sand castle” with Daddy 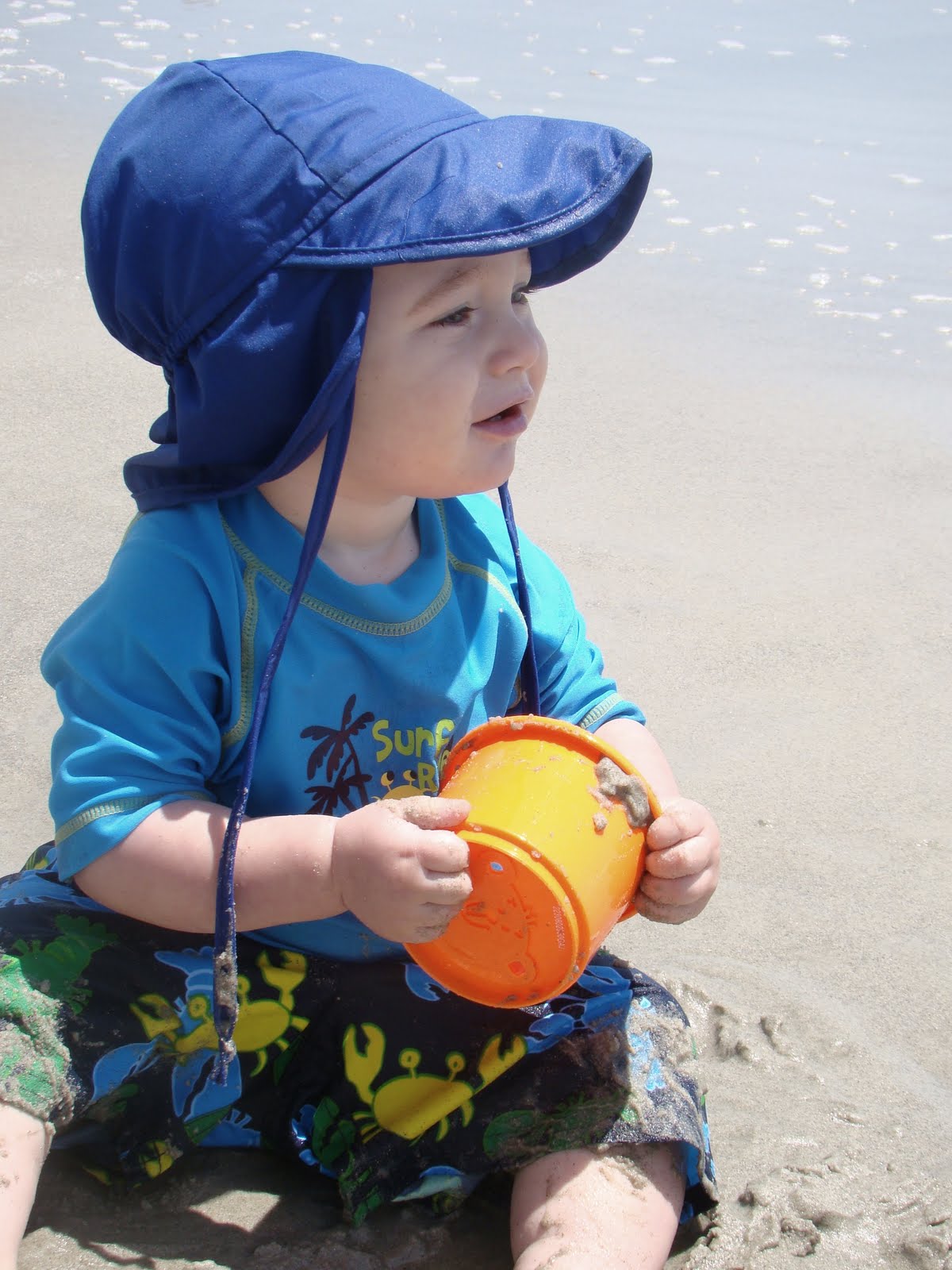 ready to head back out to the water 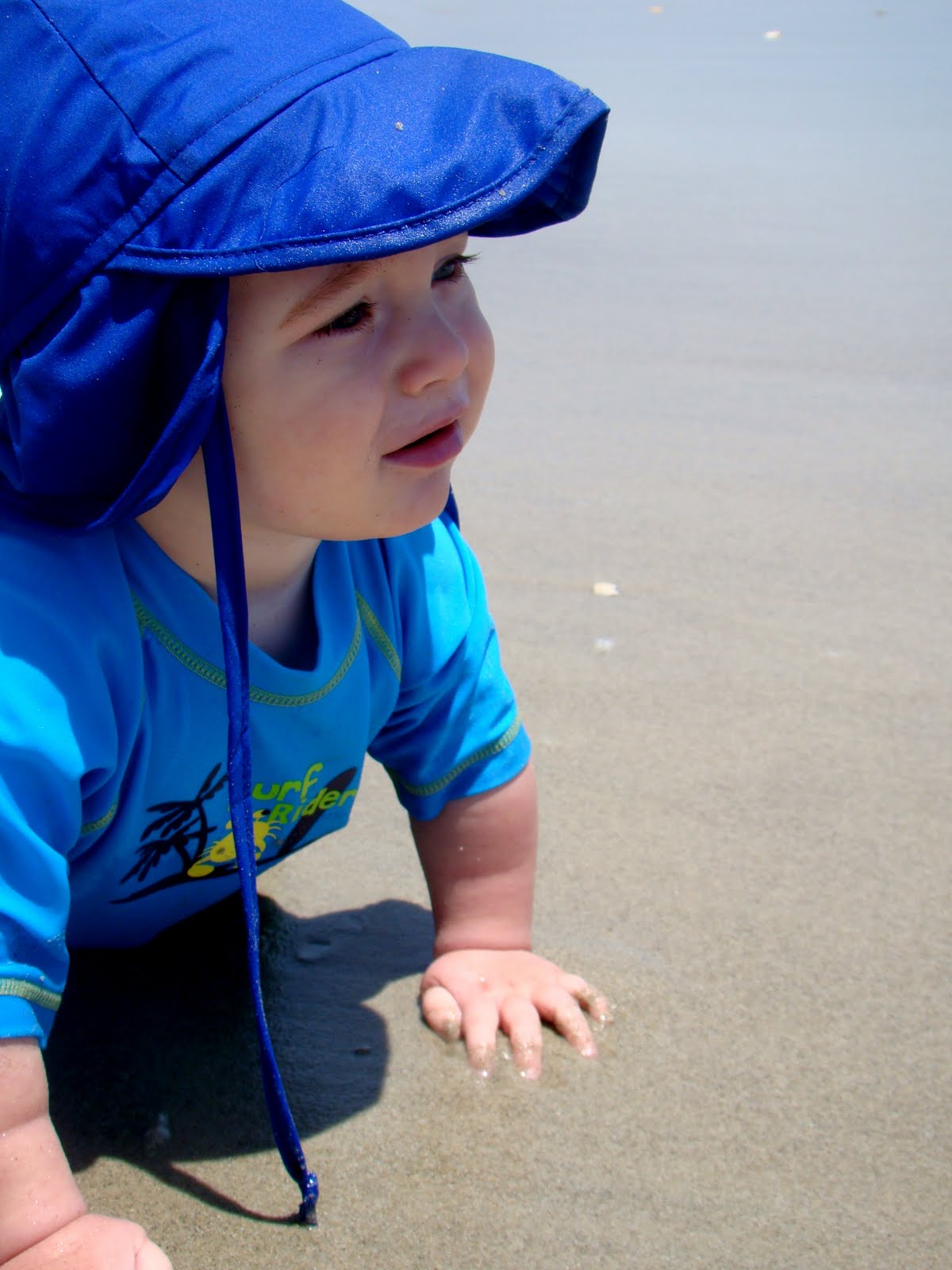 Crazy Boy Kye crawling ALL over the beach 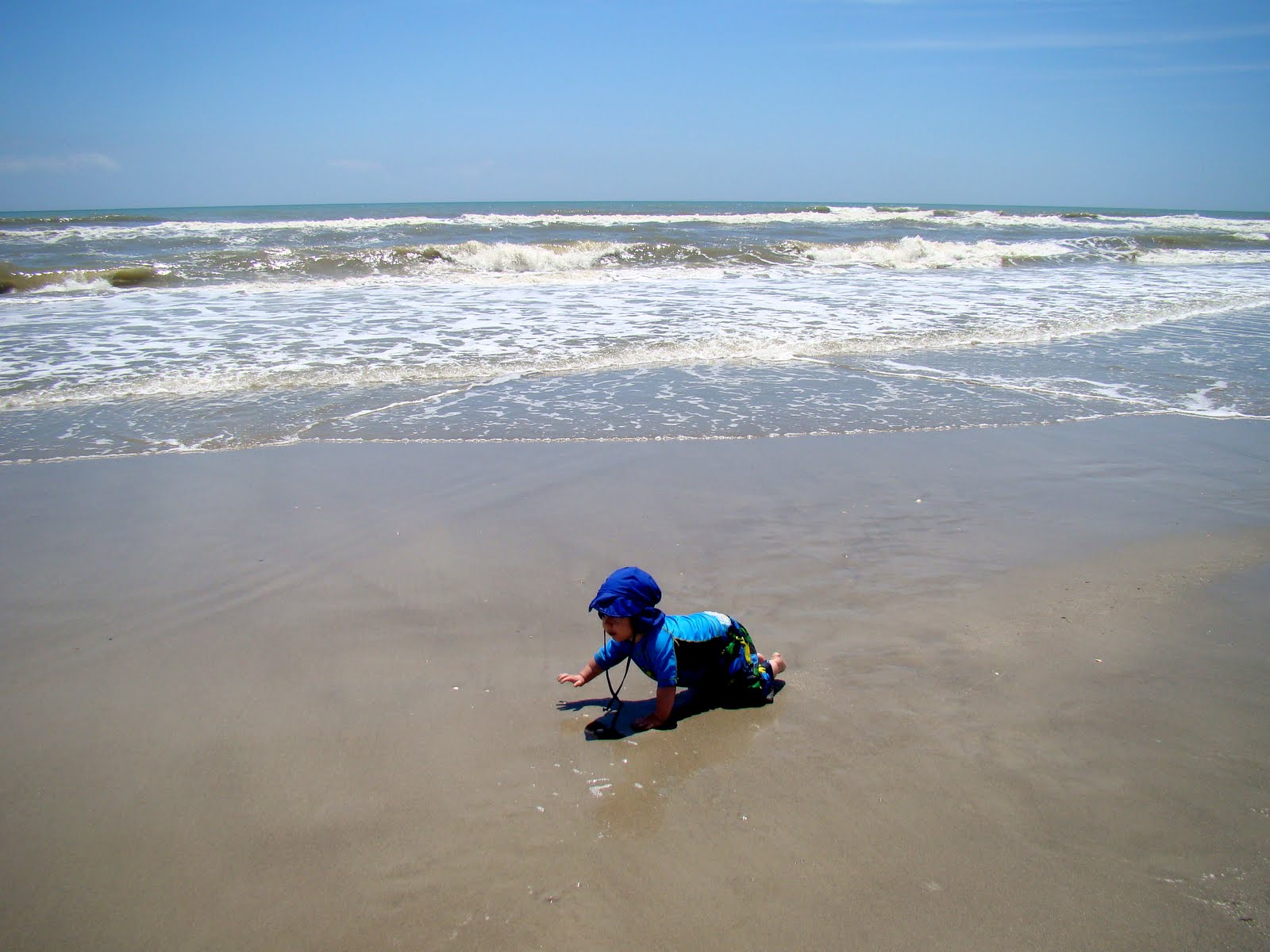 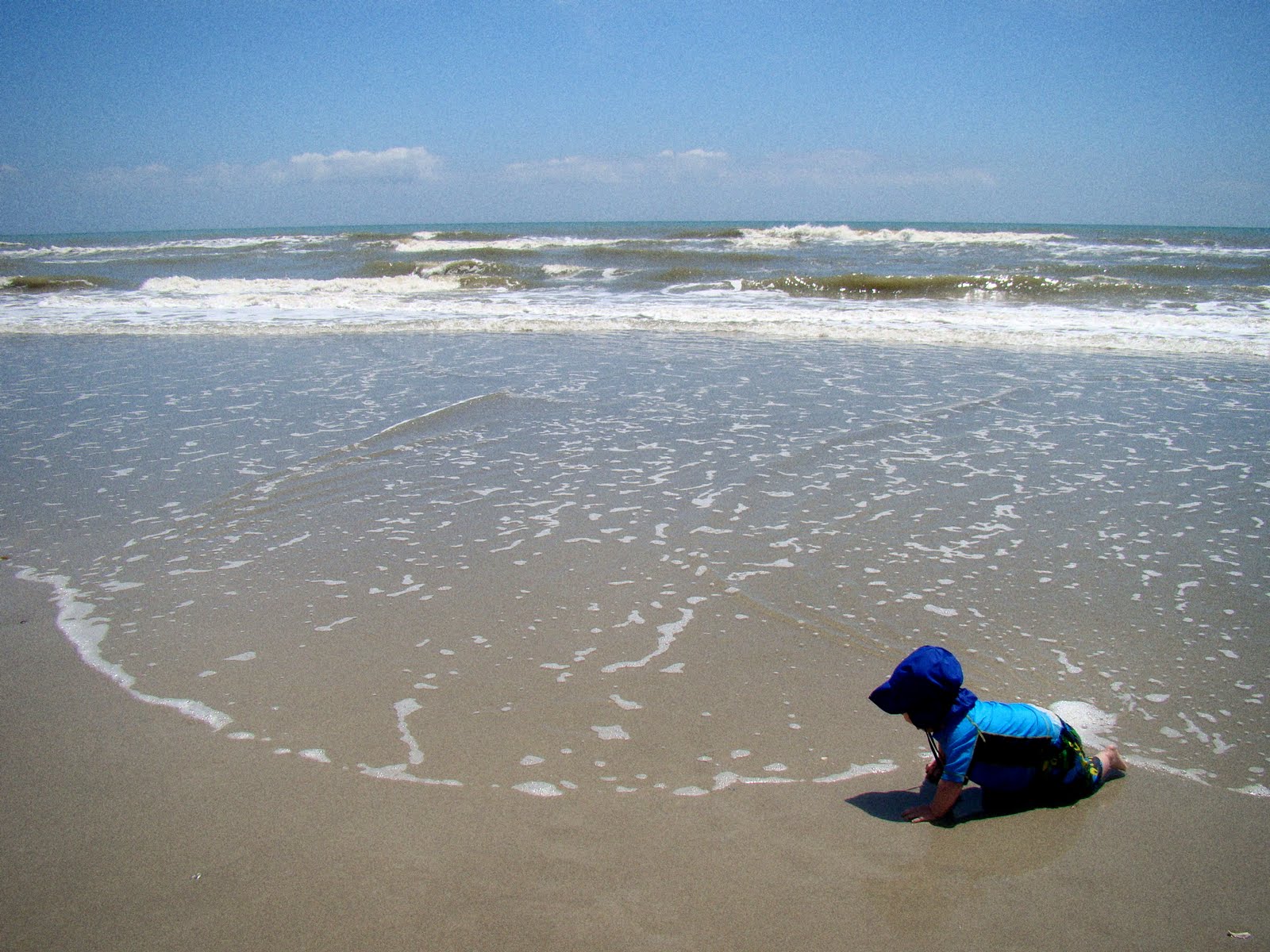 “look what I found Mommy!” 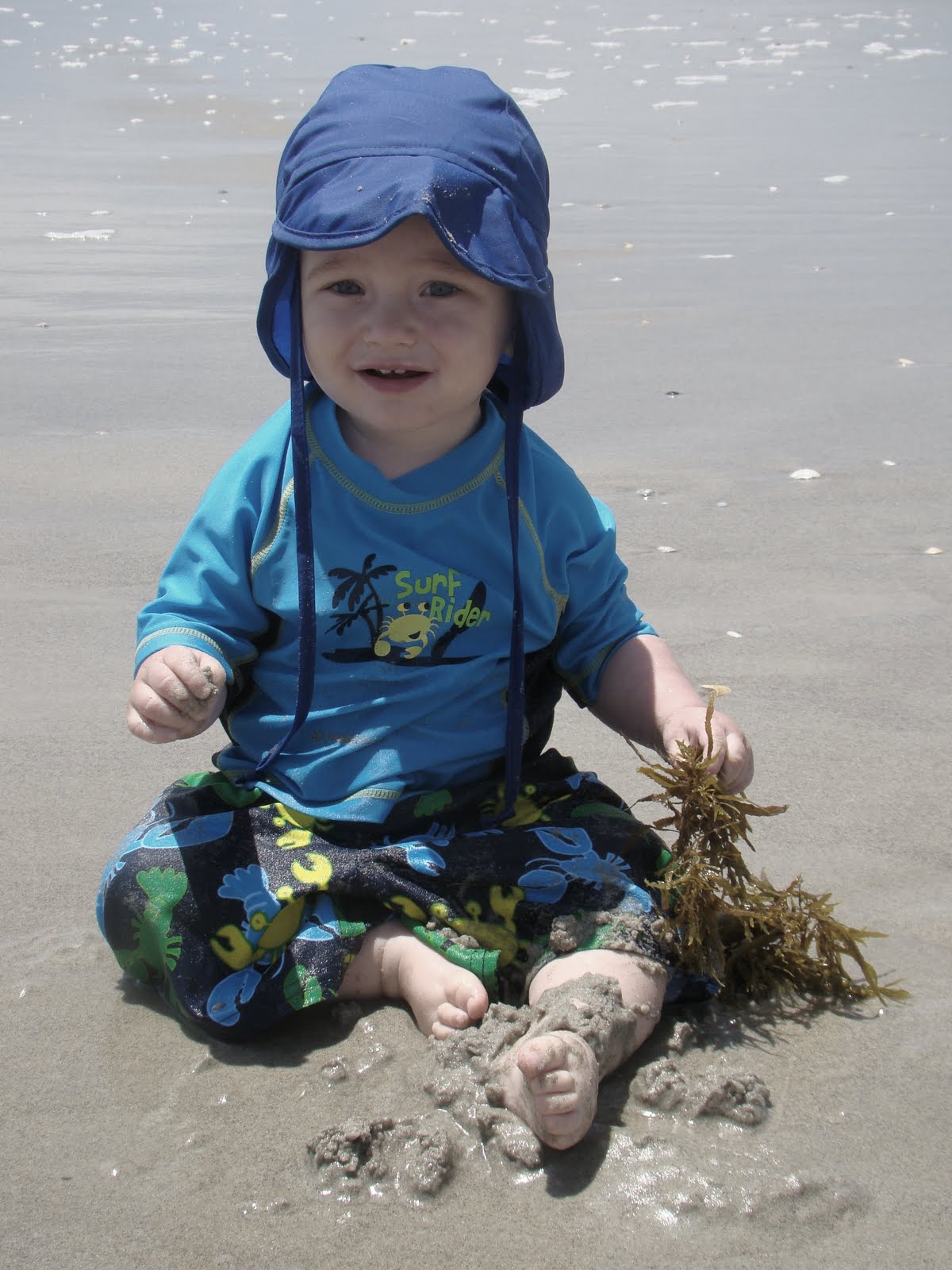 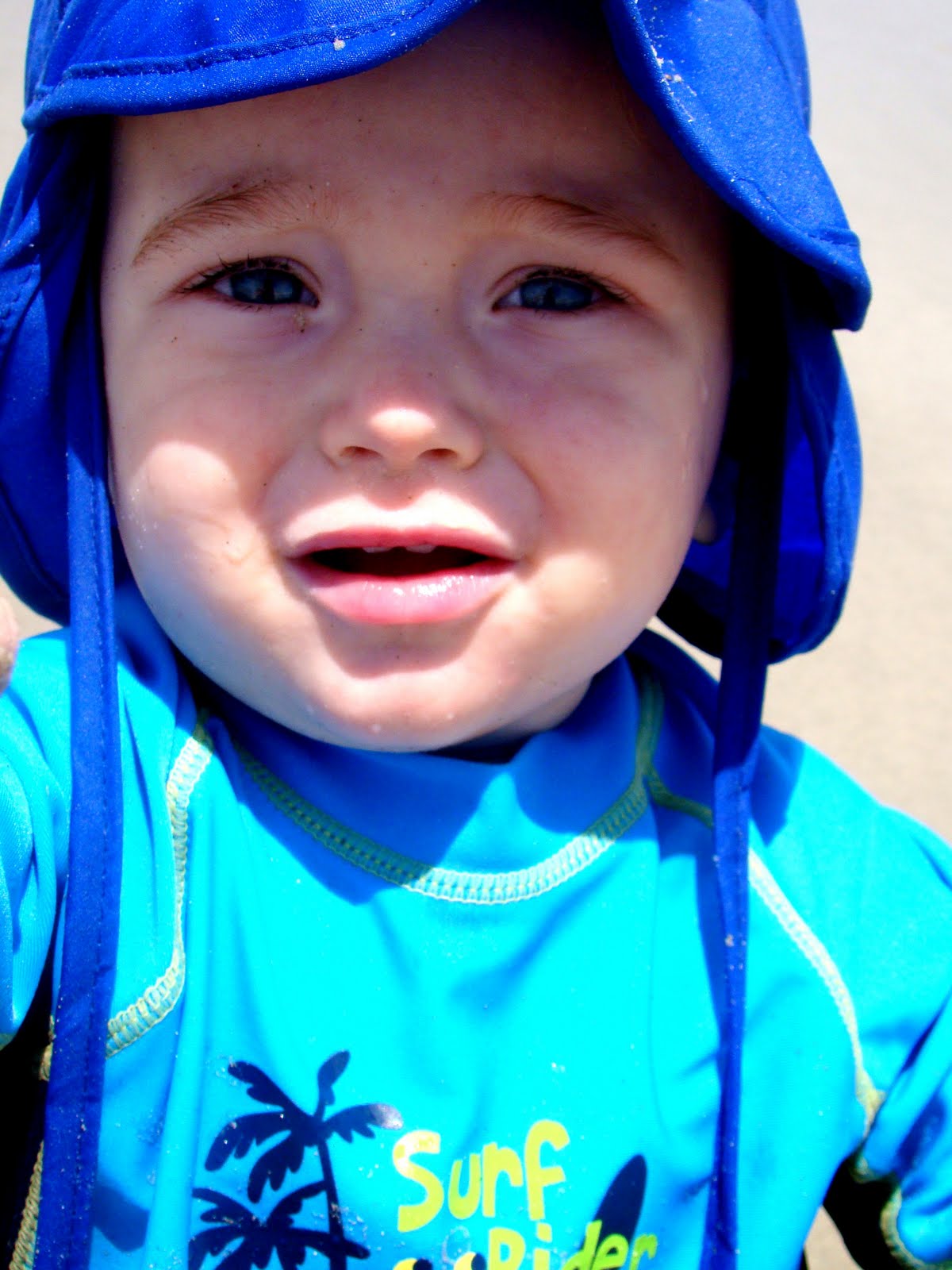 probably the happiest day of his life yet! 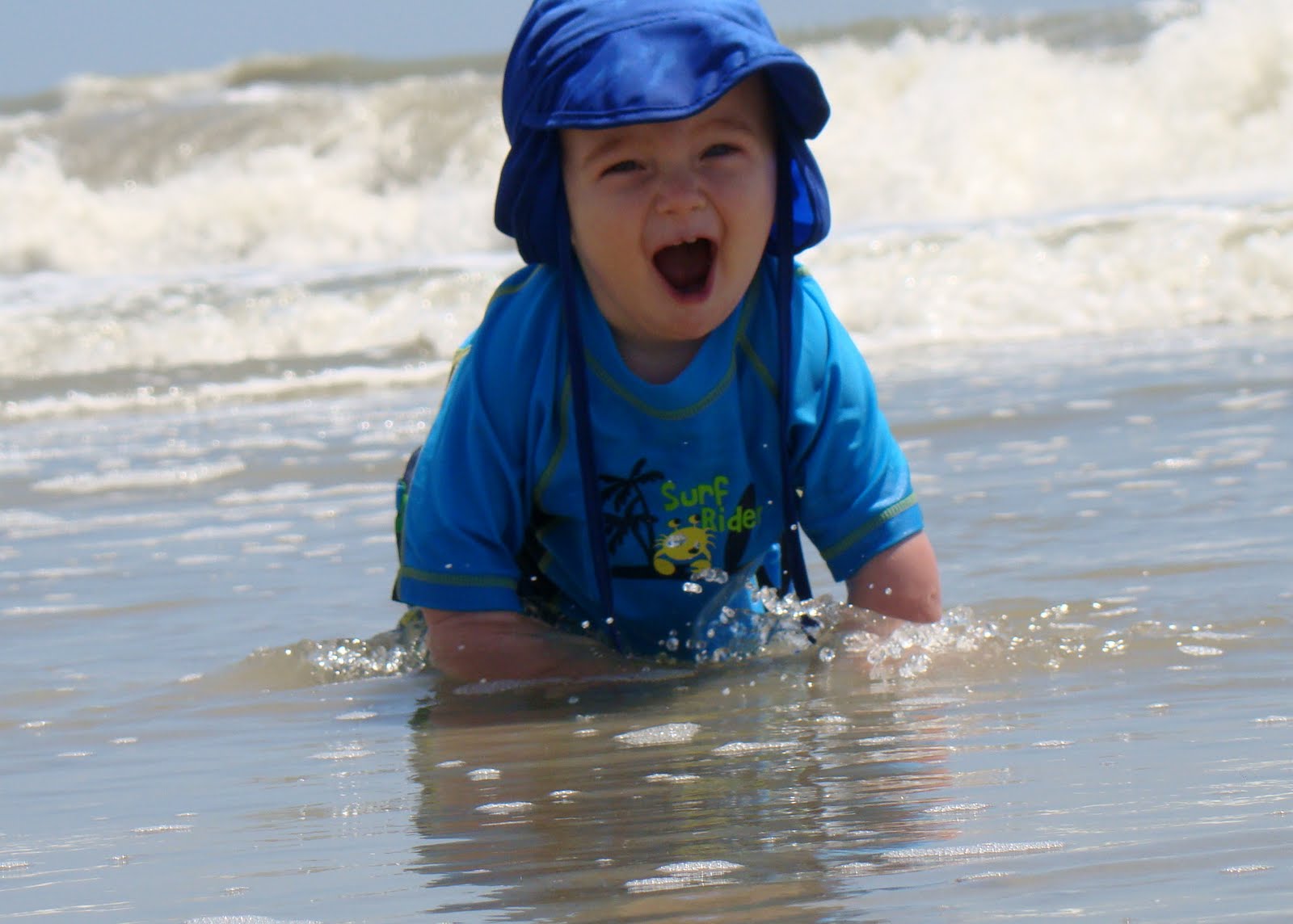