You know when life gets SO busy and you think to yourself “omg I just want to DO NOTHING.” Well…this trip allowed us that luxury. We literally did nothing for 3 days straight!

We were just going with the flow on this trip. Usually we tend to book ourselves too much to do and don’t end up RELAXING while on vacation. Well 2012 was a rough year for us and we both just wanted to chillllll. So Sunday we enjoyed our little Christmas together then heated up some chili for lunch (Zach made the chili in advance and we brought it with us!). 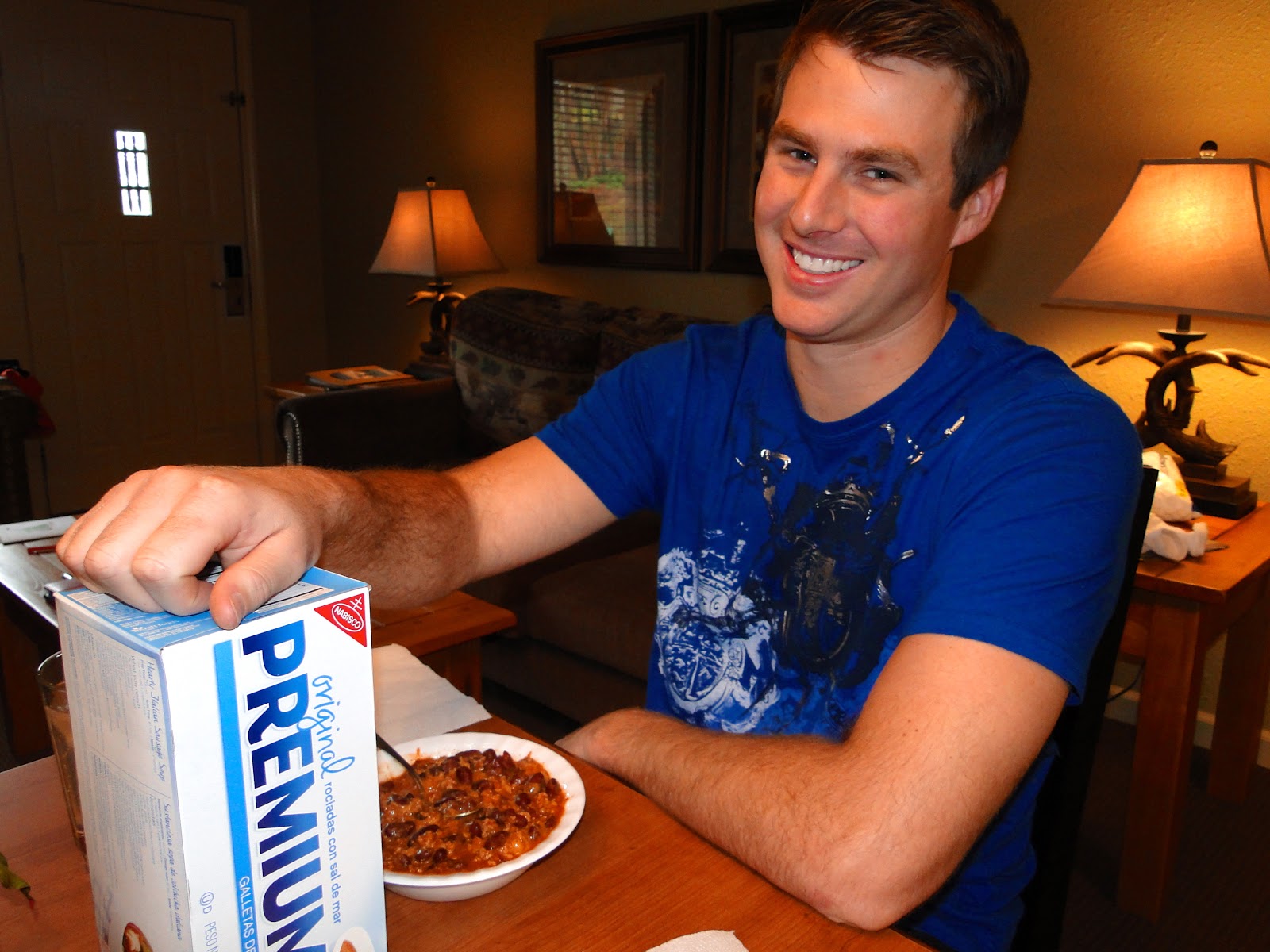 We also brought along The Office (we’re on Michael’s last season…season 7 I think…) and I gave Zach two seasons of Survivor on dvd (Season 1 and the season with Boston Rob and Amber). We haven’t seen either of those seasons so I thought it’d be fun to go back and watch them together. It’s CRAZY how much Survivor has changed over the years!!! I’m thankful I bought them for him because it gave us some variety instead of only watching The Office the entire trip 😉 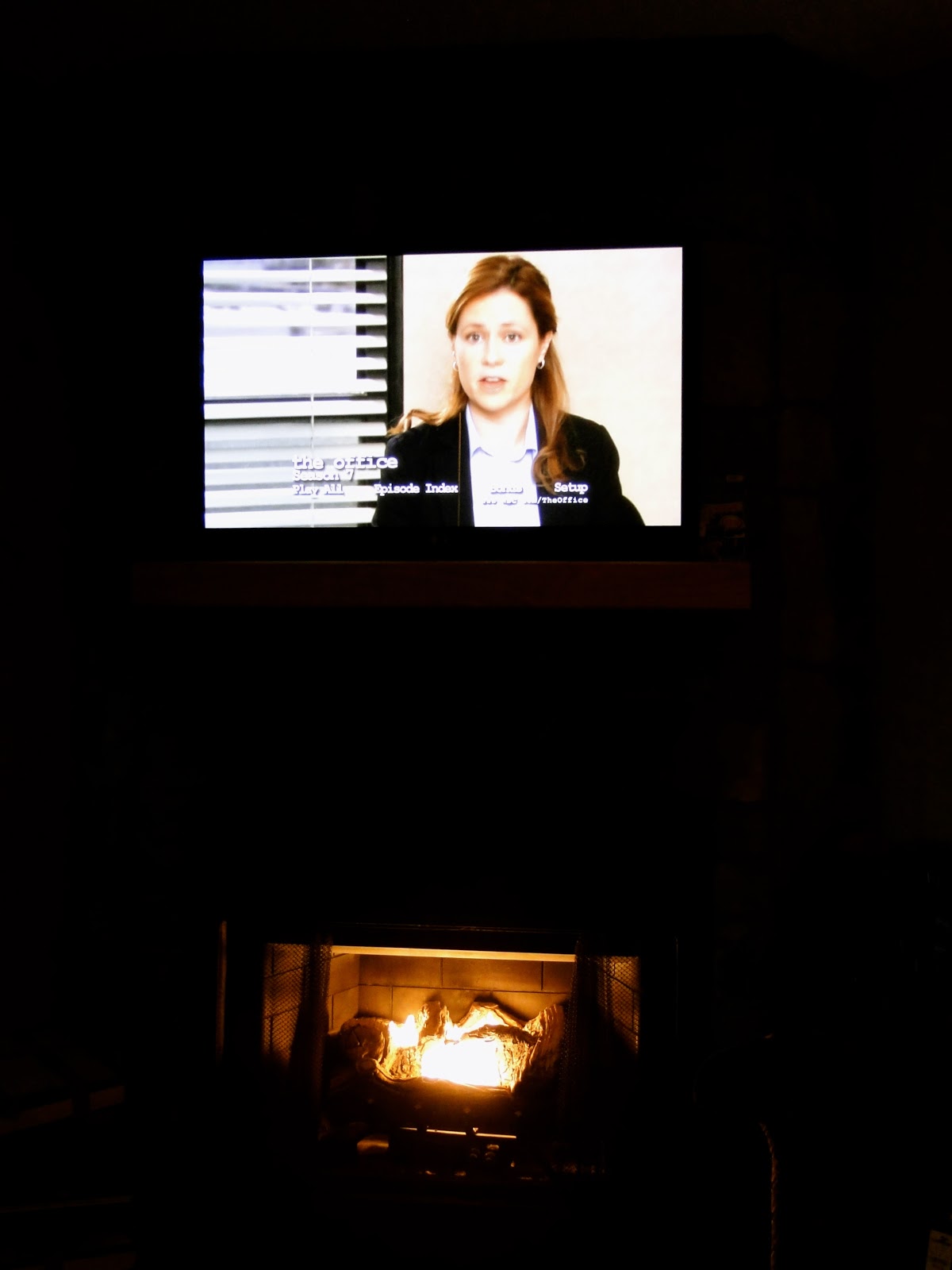 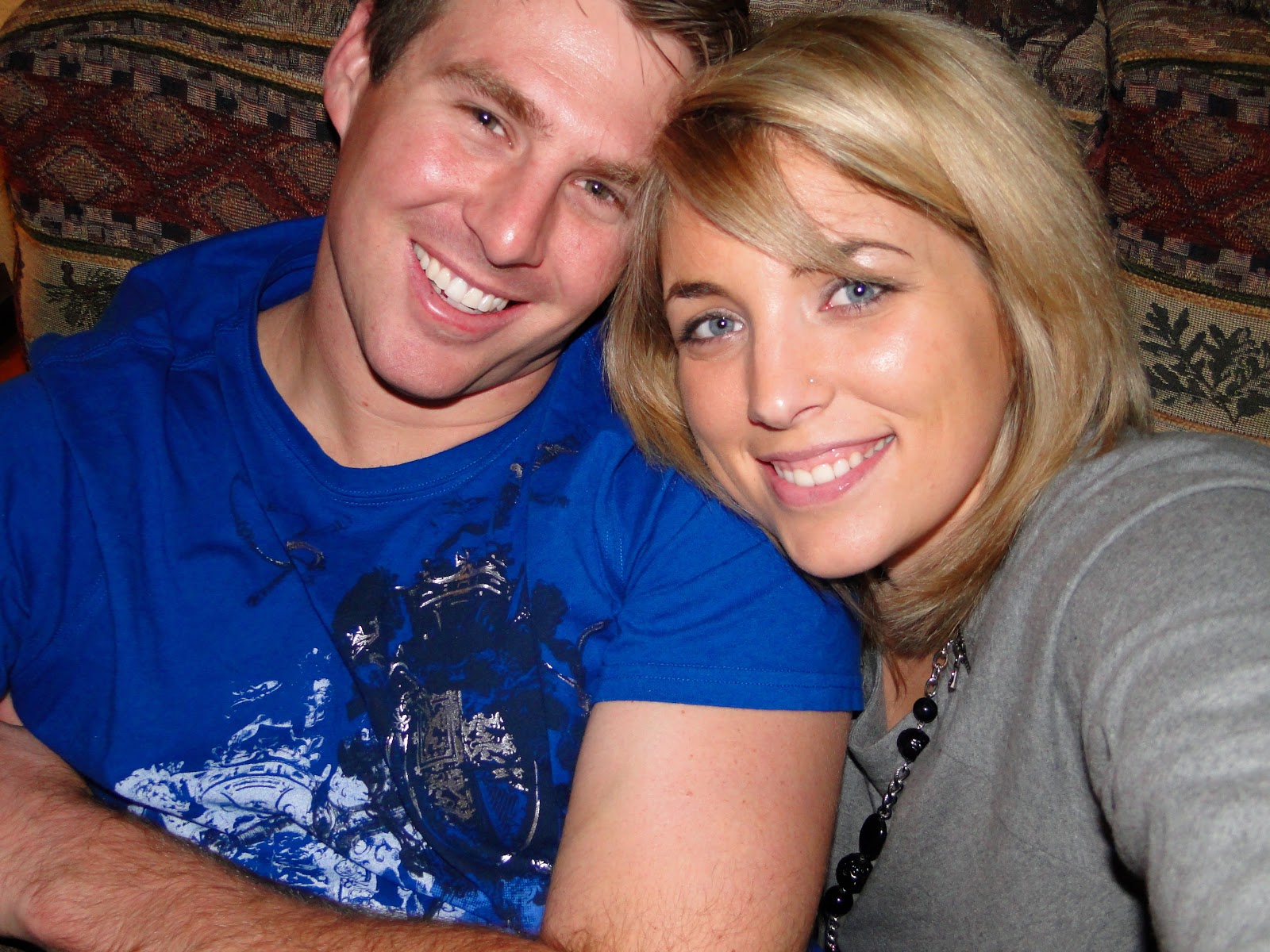 That afternoon we drove to nearby Boone to the ONLY movie theater to watch a movie. We planned on seeing Life of Pi but when we got there we realized it was only available in 3D. Personally, I think 3D is stupid. Plus I didn’t want to pay $11.50 PER ticket to see it. No thanks. Instead we saw Twilight: Breaking Dawn Part 2. Zach hadn’t seen it yet and I didn’t mind getting to see it again. The premier nights are always so crazy that it’s hard to pay a lot of attention to the movie 😉 Zach enjoyed it (yes, he’s read all the books and liked them!) and I’m glad I got to see the twist again!

Afterwards we went to eat at Stonewalls for dinner. The service wasn’t that great but I didn’t mind…it gave me a chance to just enjoy looking at my husband! I know that sounds lame but life gets to be SO crazy that it can often feel like we never stop to just SEE each other. It’s always a quick kiss out the door. A quick kiss before bed. Maybe a “hey!” when he gets home from work. It can begin to feel like we’re just roommates sharing a house and a couple kids 😉 Having this quality time together really rejuvenated us both and rekindled those sparks between us.

Rockin both a cardigan and a scarf and wearin’ em well 🙂 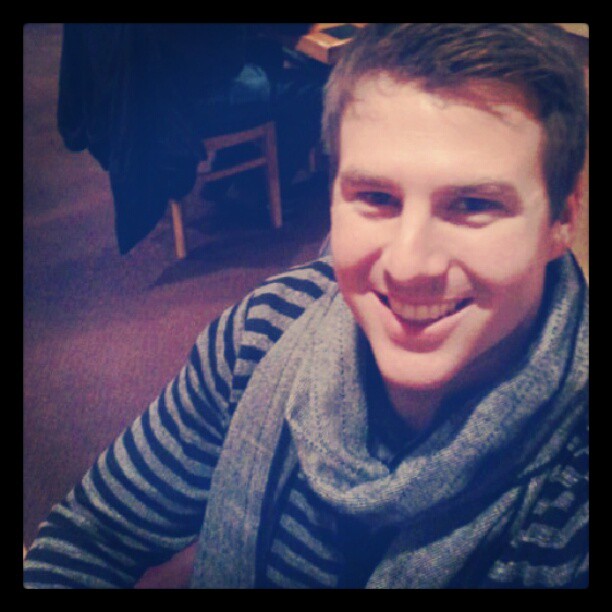 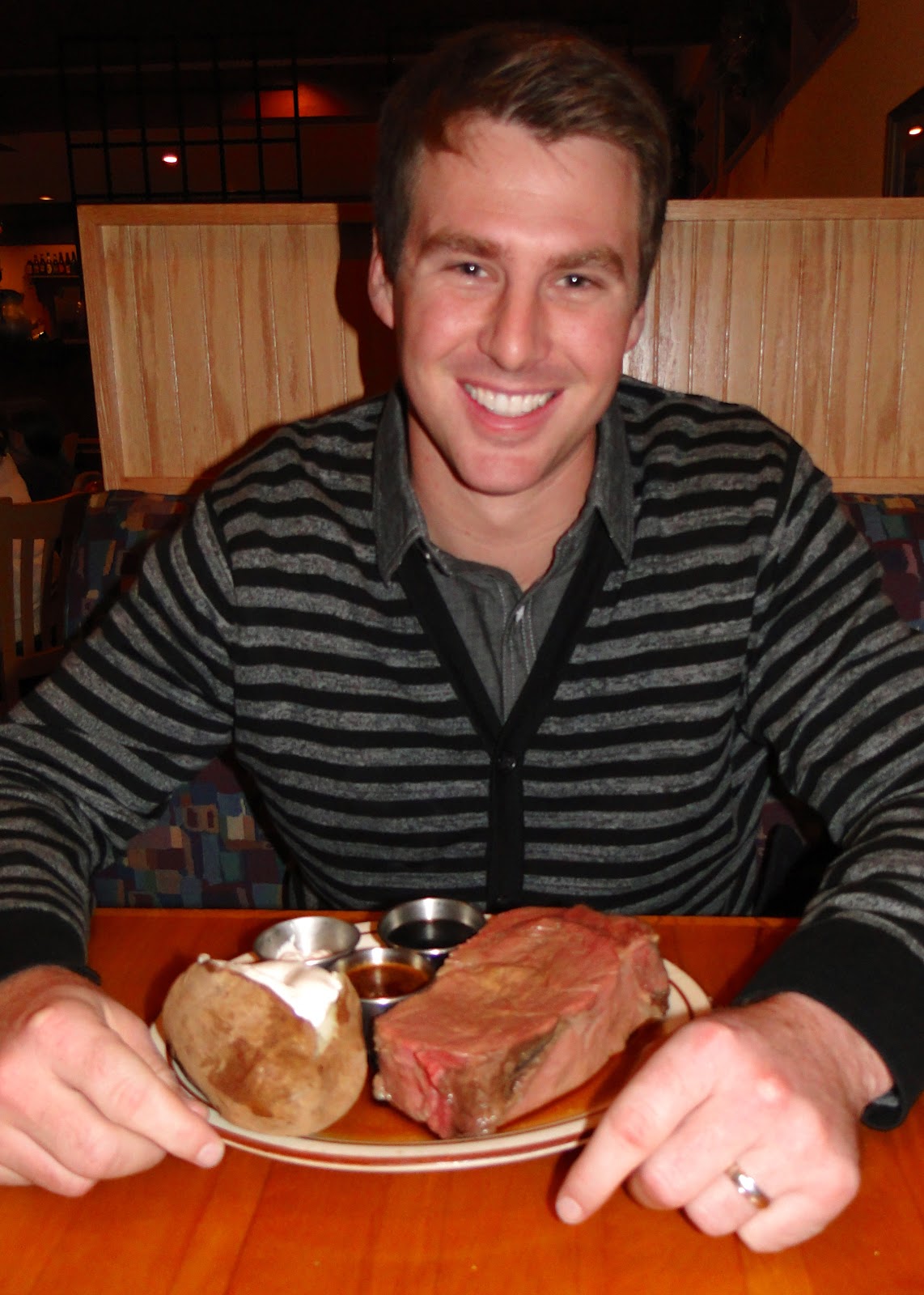 I was NOT hungry. After all the junk we ate at the movie I just wanted a potato and some lobster bisque. Random, but yummy! 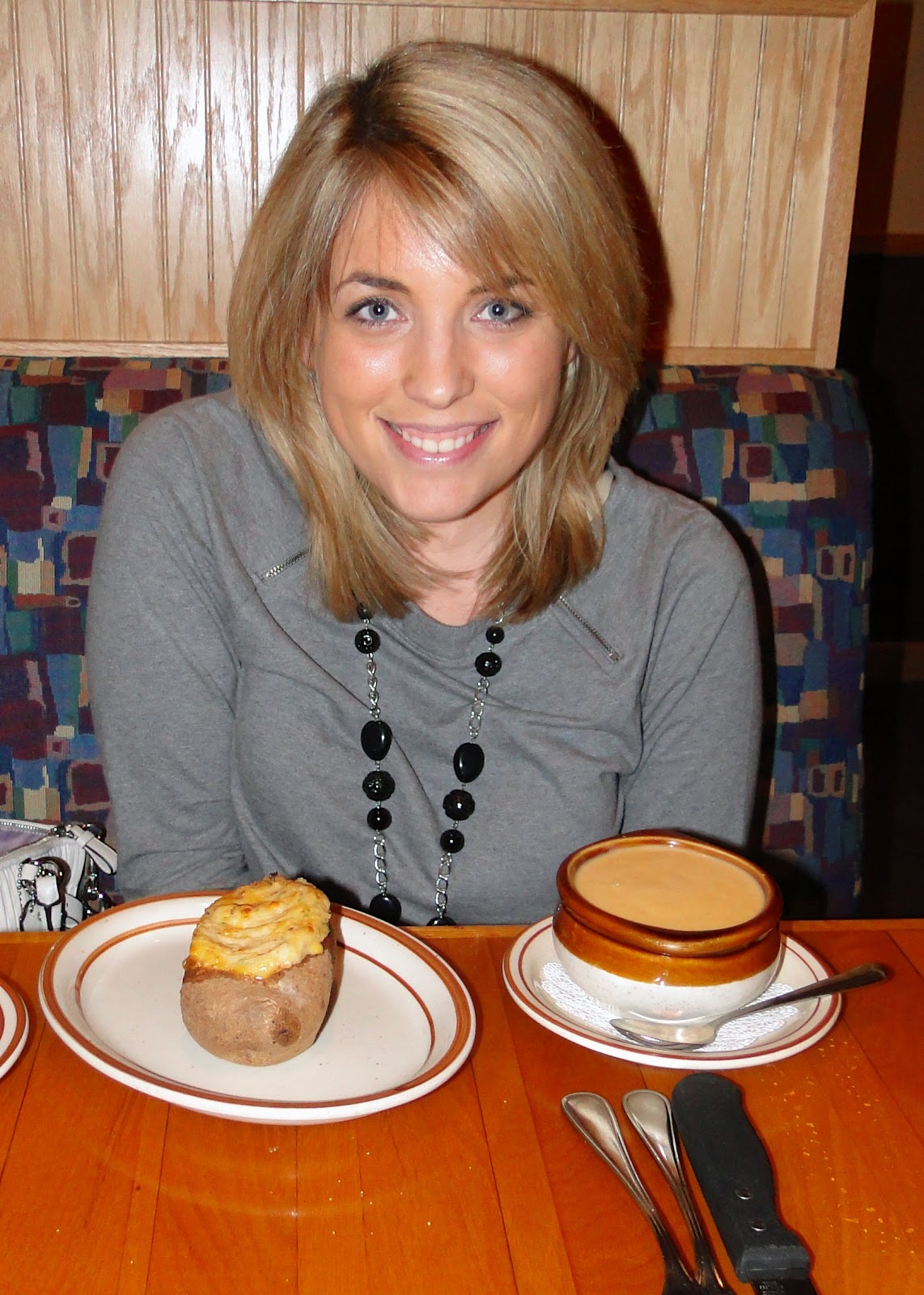 That night was the Survivor finale so we decided to watch it live. It’s funny because Survivor, Big Brother, and The Bachelor are our favorite shows to watch together and the Big Brother finale was while we were on vacation at Disney! I wonder where we will be for The Bachelor finale? 😉 During commercial breaks I would address more Christmas cards and Zach would watch some football.

Monday morning it was raining. We discussed it and decided we’d just ski on Tuesday. Since we were there later in the year the prices for skiing would be higher and with my foot issues I was a little nervous about how I would do anyway on the slopes. We decided to use Monday as a day to hunt down a Christmas ornament for our collection, gifts for the kids, and try to eat at Smokey’s. It’s a special place to us as it’s where we decided our names for our children.

We found this little shop and ended up getting everything we needed souvenir wise! We got an ornament for our tree, a little stuffed bear for Brittlynn, and some rocks (I know…it was slim pickings…) for Kye. 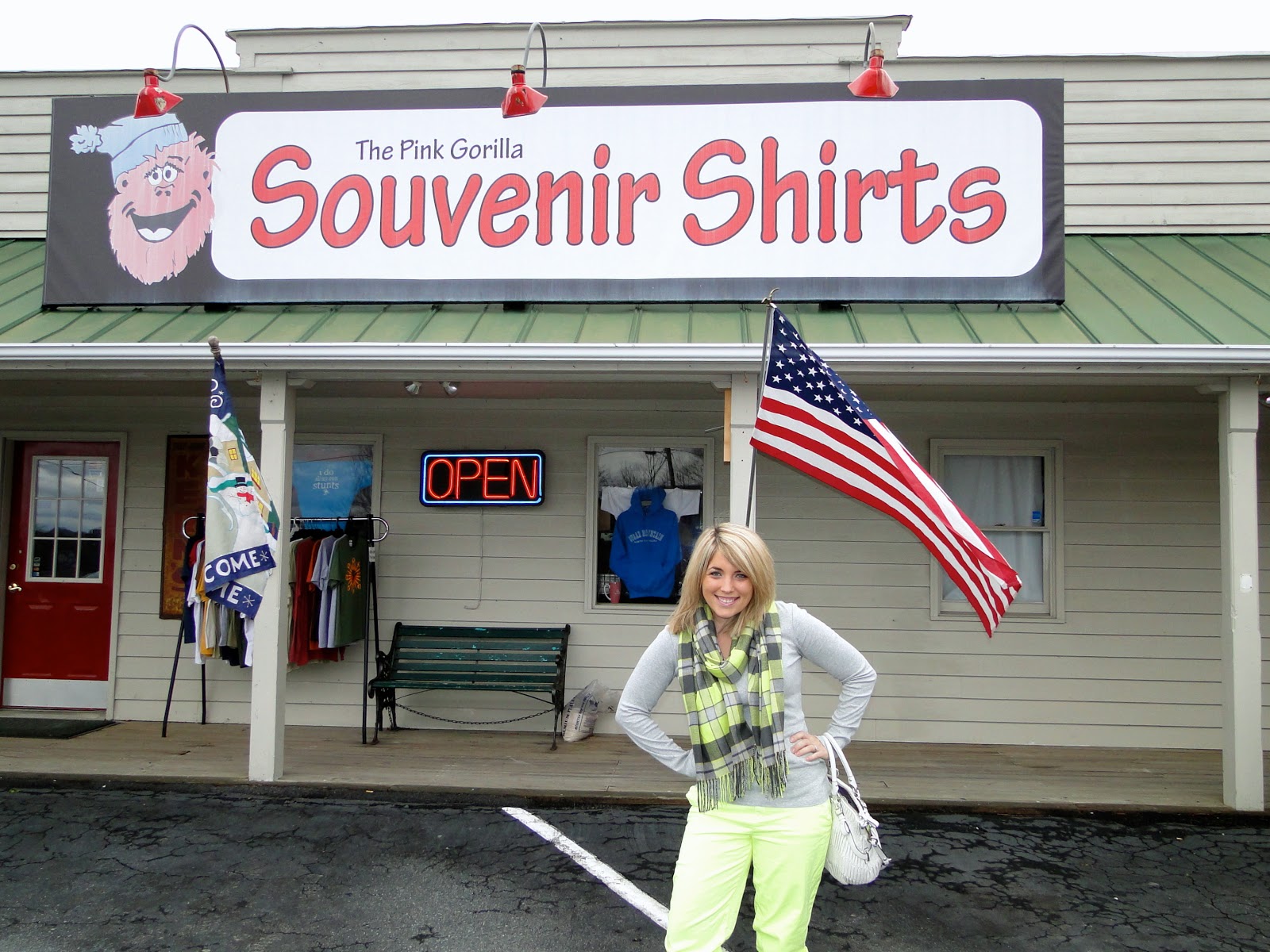 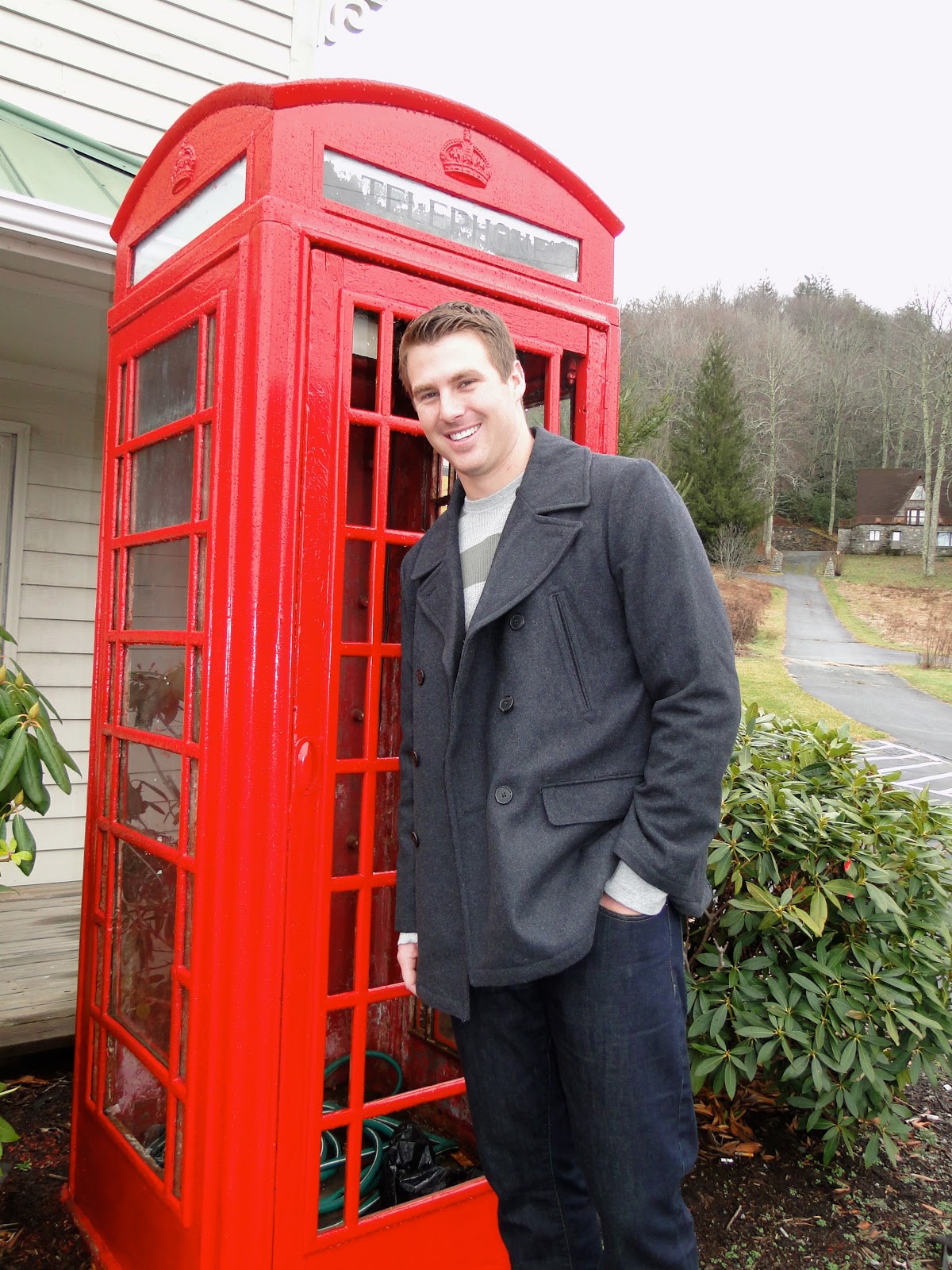 Next we headed to downtown Banner Elk to get our favorite pictures in front of the Elk! 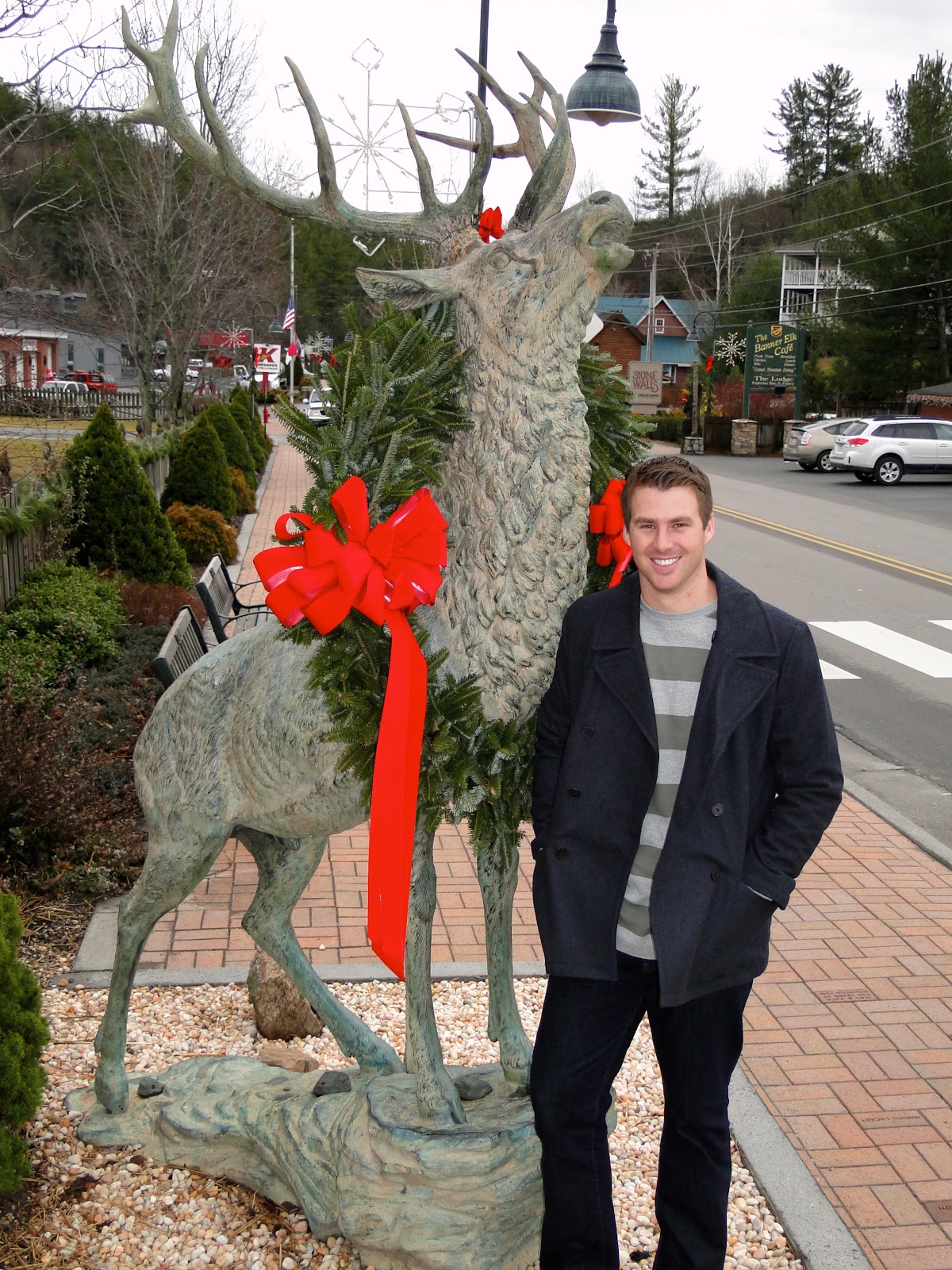 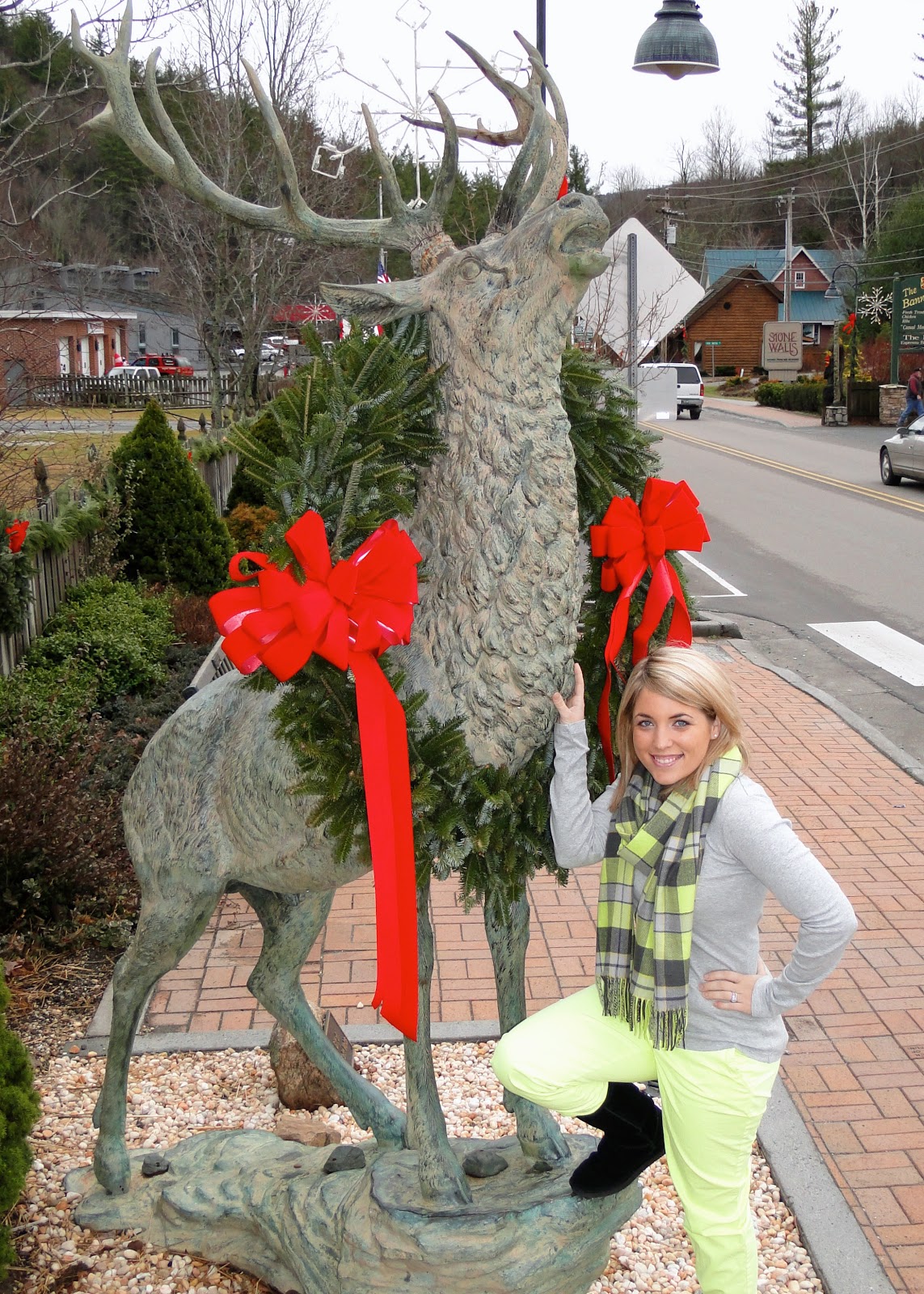 Smokey’s is UP the mountain so on our way we stopped and go out for a couple of pictures…SO beautiful! 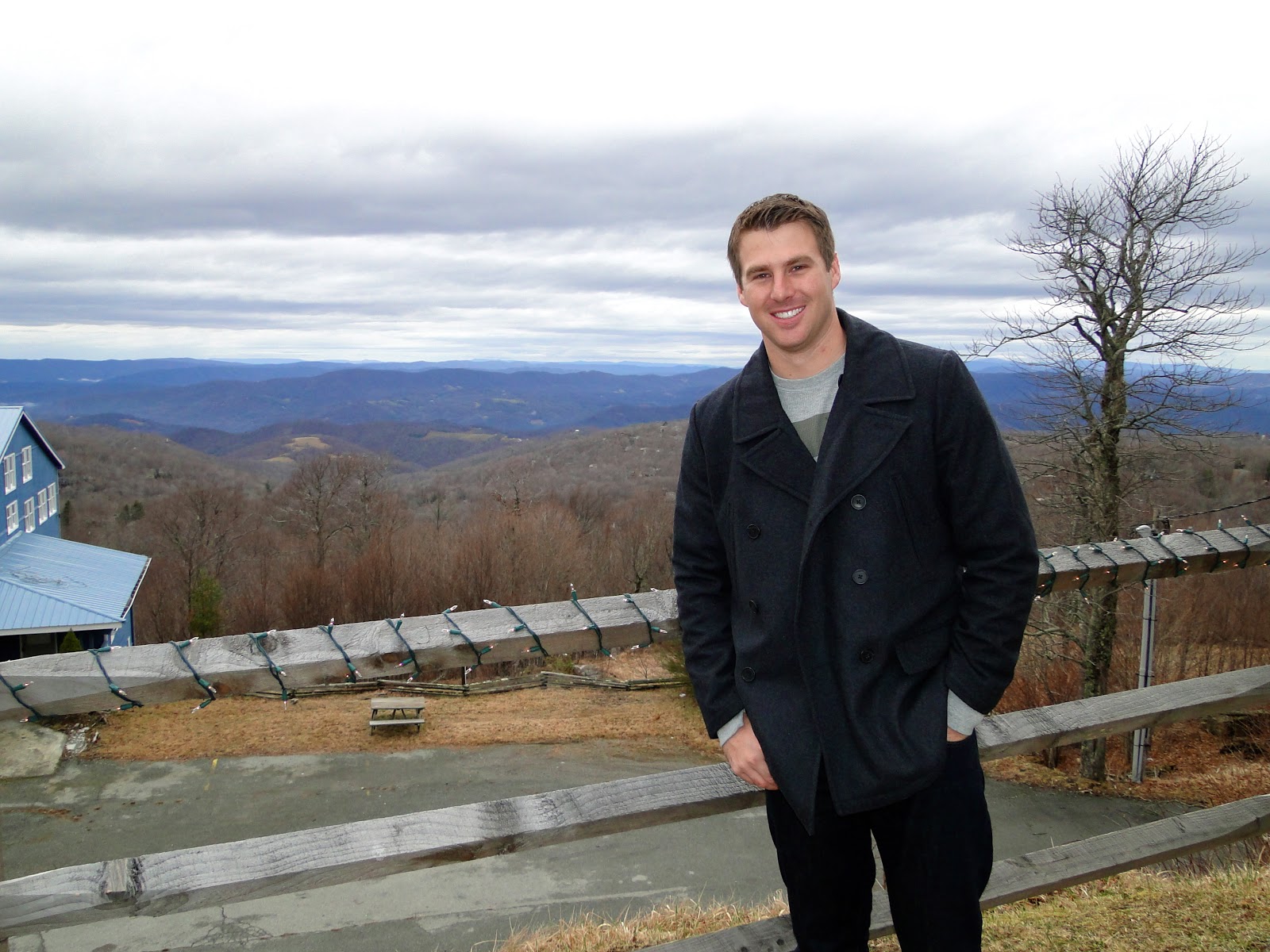 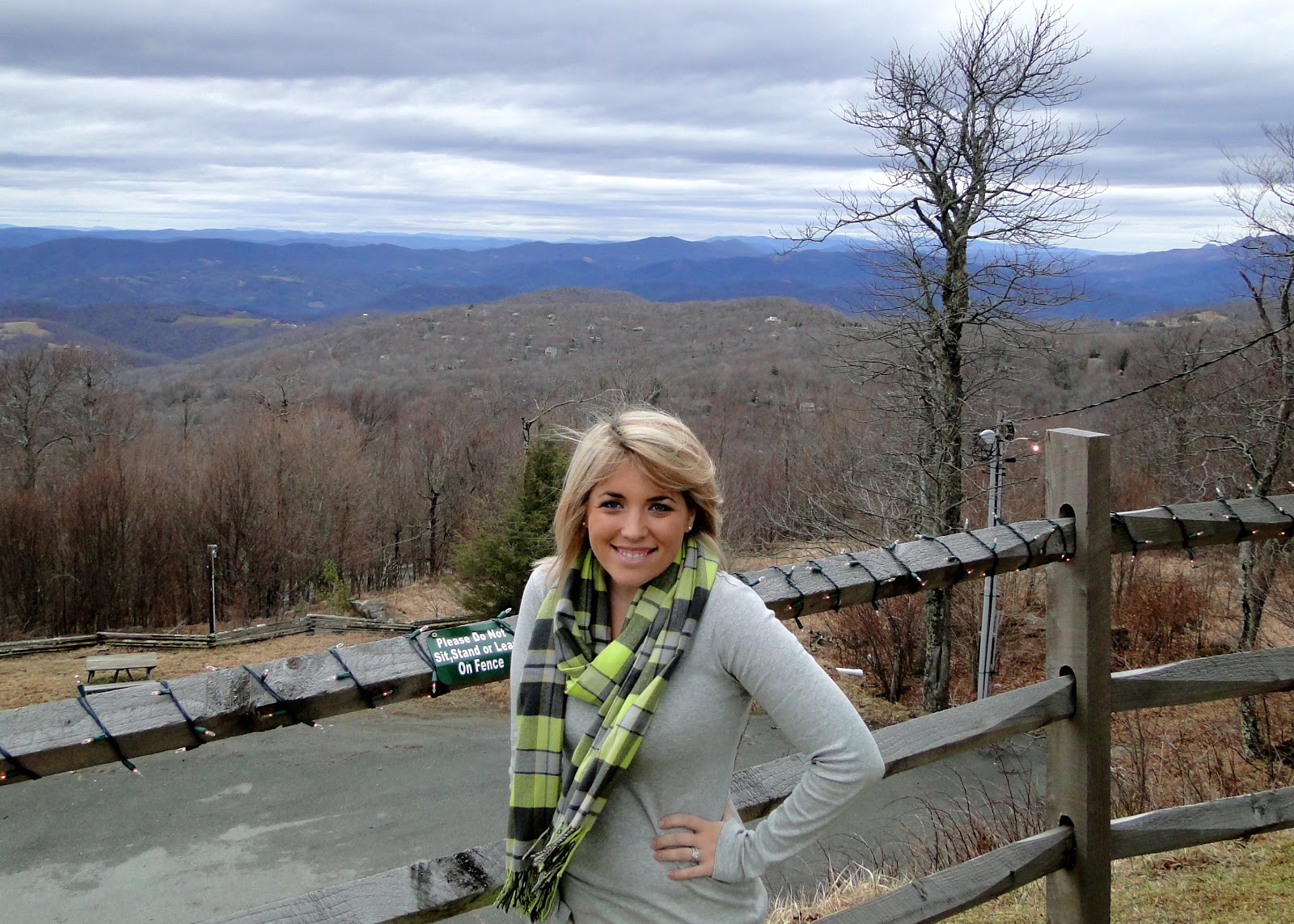 Well…we passed Smokey’s and it was changed into somewhere new. Which we figured might have happened. It’s been a LONG time and with this economy it makes sense for it to change hands. Since we were already so far up the mountain we decided to go the rest of the way and check out the slopes for the next day. We both had a bad feeling…and that feeling was correct.

We pulled into the parking lot of the ski slopes and it was EMPTY. We still had to see for ourselves so we headed over to where we would normally buy tickets/change clothes/etc. And BAM. NO SNOW. We were sad, but even more sad for a family we passed with FLORIDA tags on their car and the kids decked out in ski gear. I’m sure they were devastated!!! A worker happened to pass by and told us that it has just been too warm of a winter and they weren’t going to start blowing the snow until Wednesday (which was when we were leaving). Really crappy news 🙁 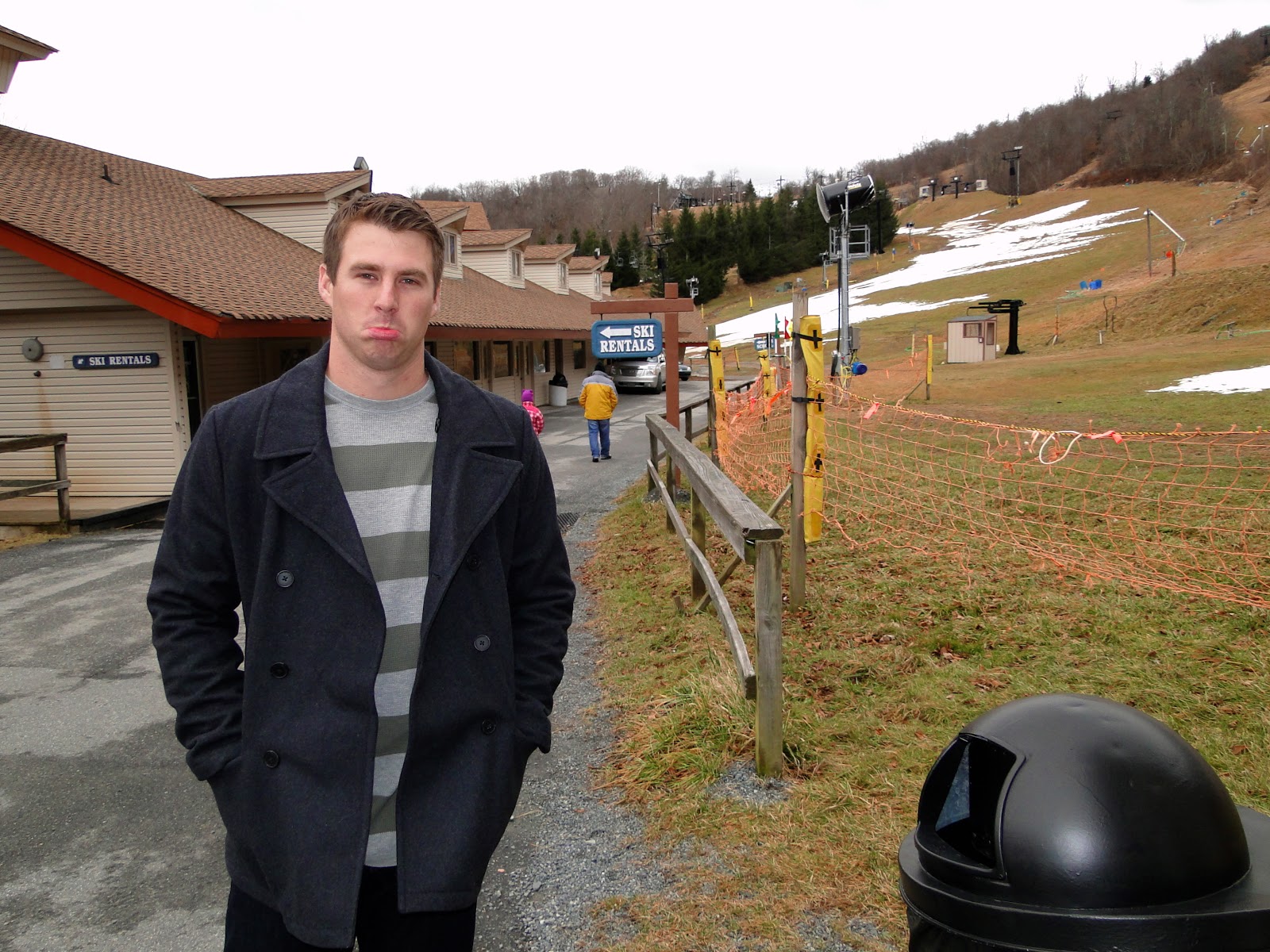 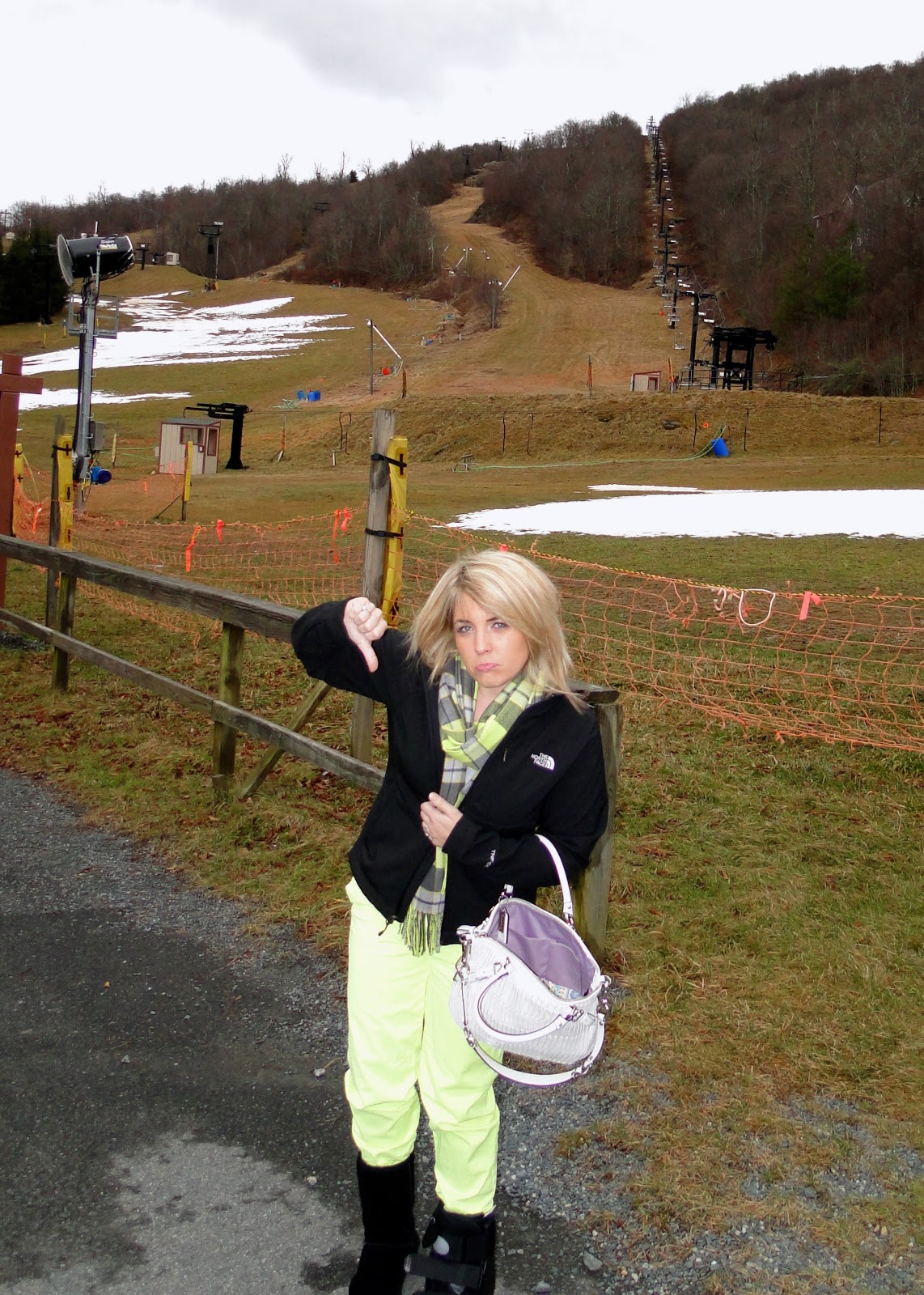 We were kinda bitter and decided to just go back to Banner Elk. We ate at a little restaurant, The Banner Elk cafe, for lunch. We talked to our waitress about other things to do in town when there wasn’t any snow on the slopes. Literally…she said there were NO other options. We debated actually getting massages but ended up deciding just to go back to Boone and see another movie. 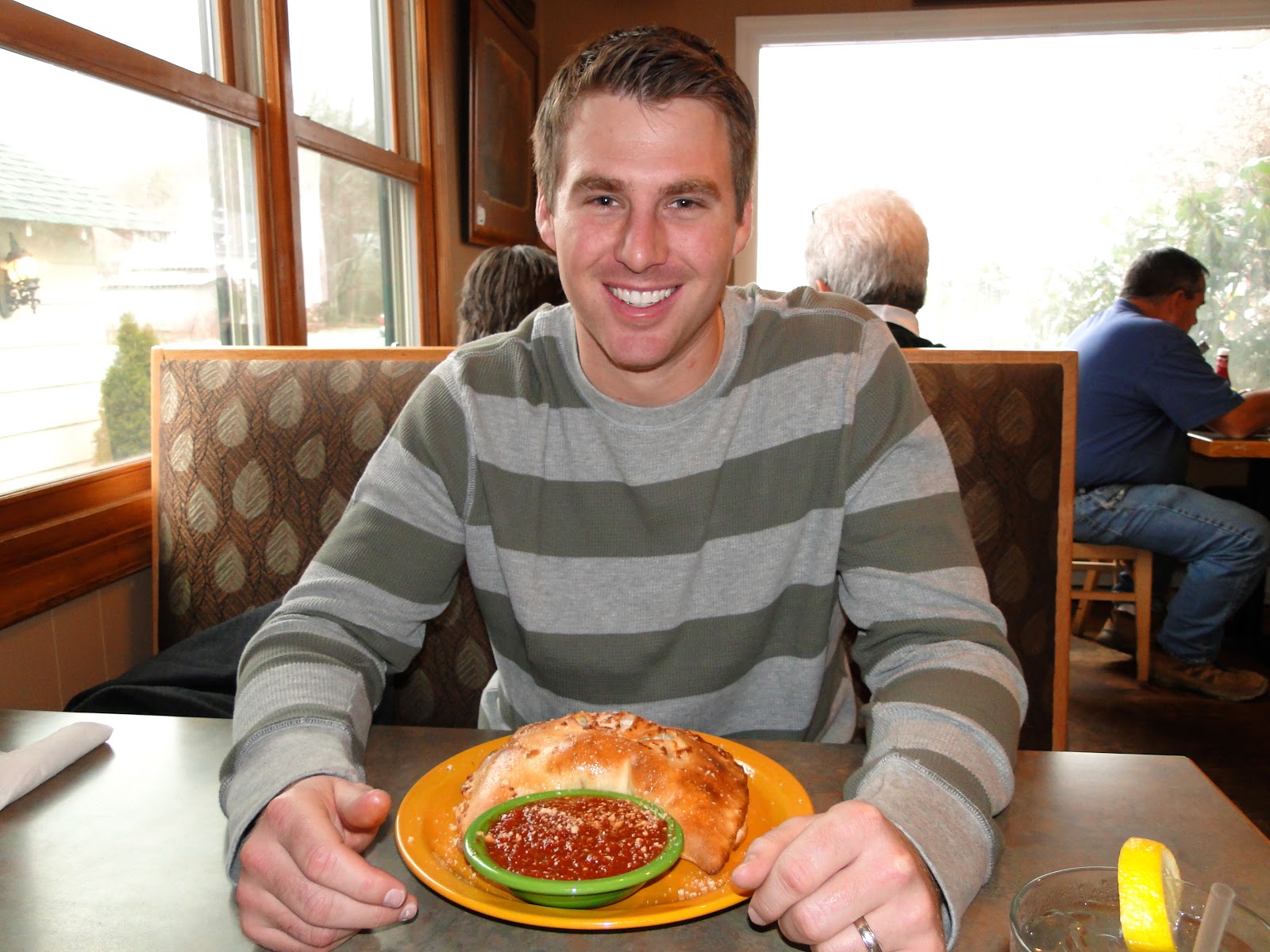 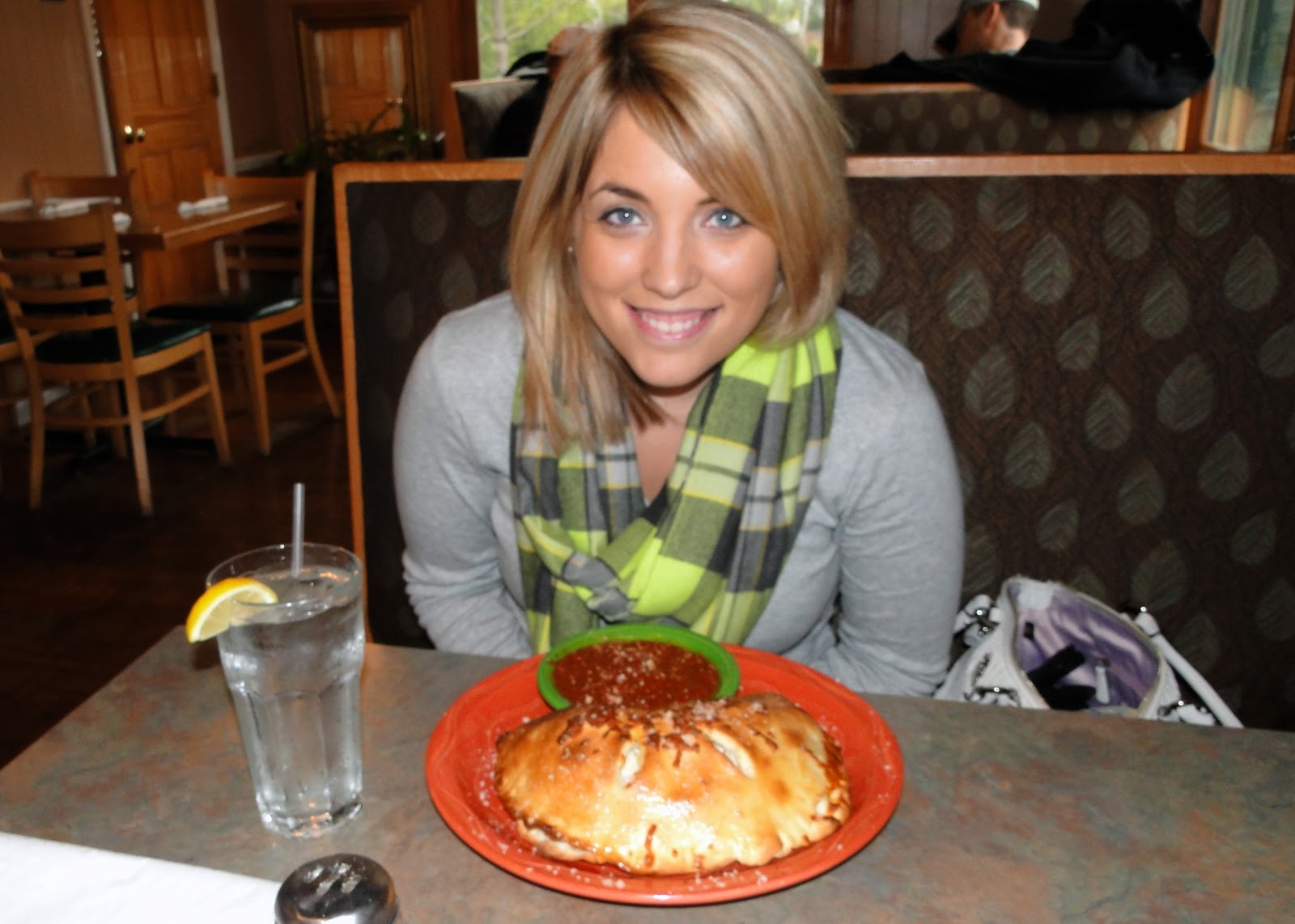 We went and saw Lincoln (snooze fest) and then ran to the store to pick up some more treats and went back to the room. We cuddled up and watched MORE of The Office to end the day! 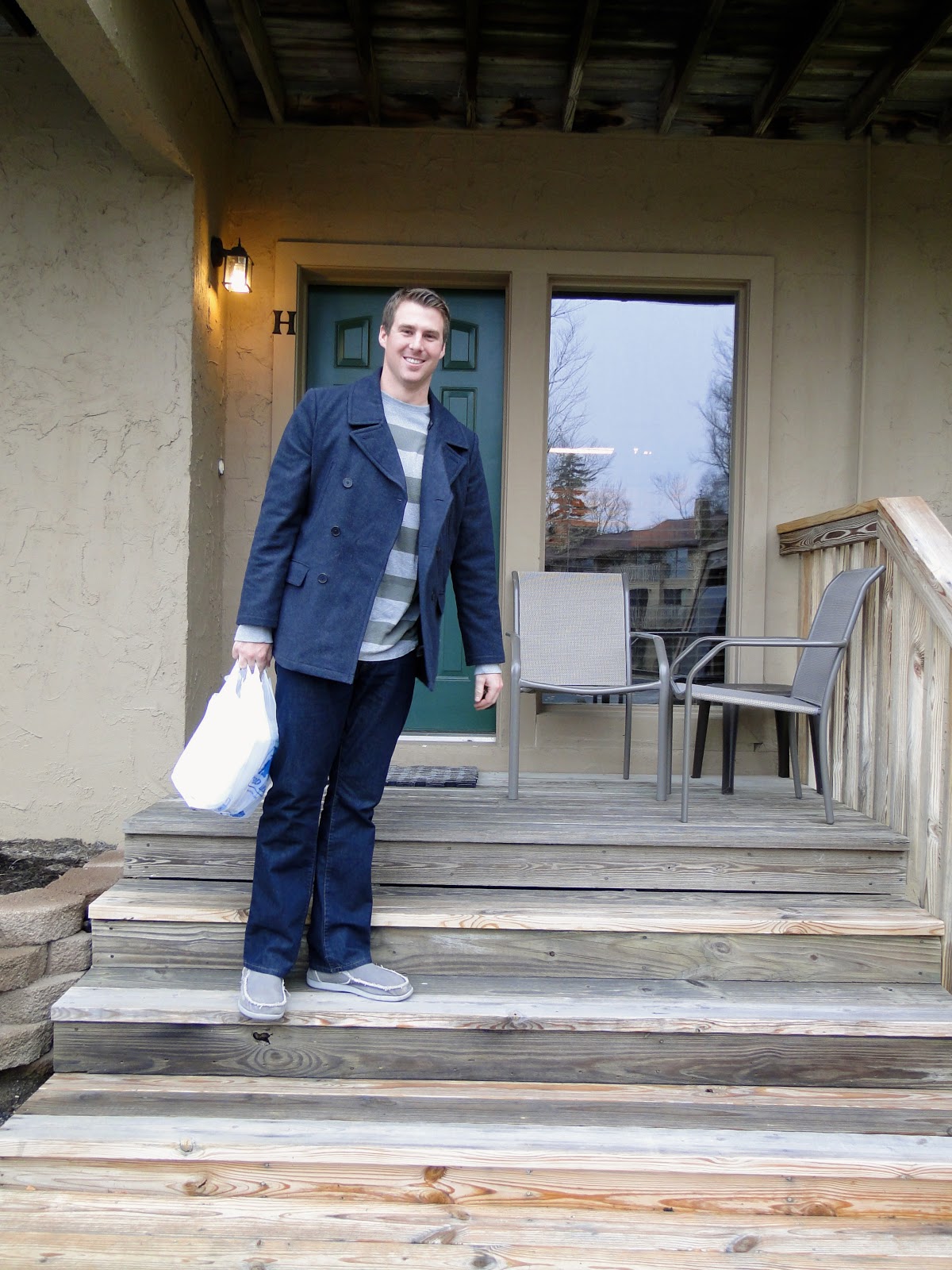 By Tuesday we were pretty bored. I mean there is only so much relaxing you can do!!! We decided to be straight up chill mode all day and just not go anywhere. We watched a lottttt more tv (more The Office, more Survivor) and Zach went out to The Painted Fish again (where we ate the first night) and got us lunch to go. Seriously, the burgers were THAT good that we wanted to eat them again 🙂 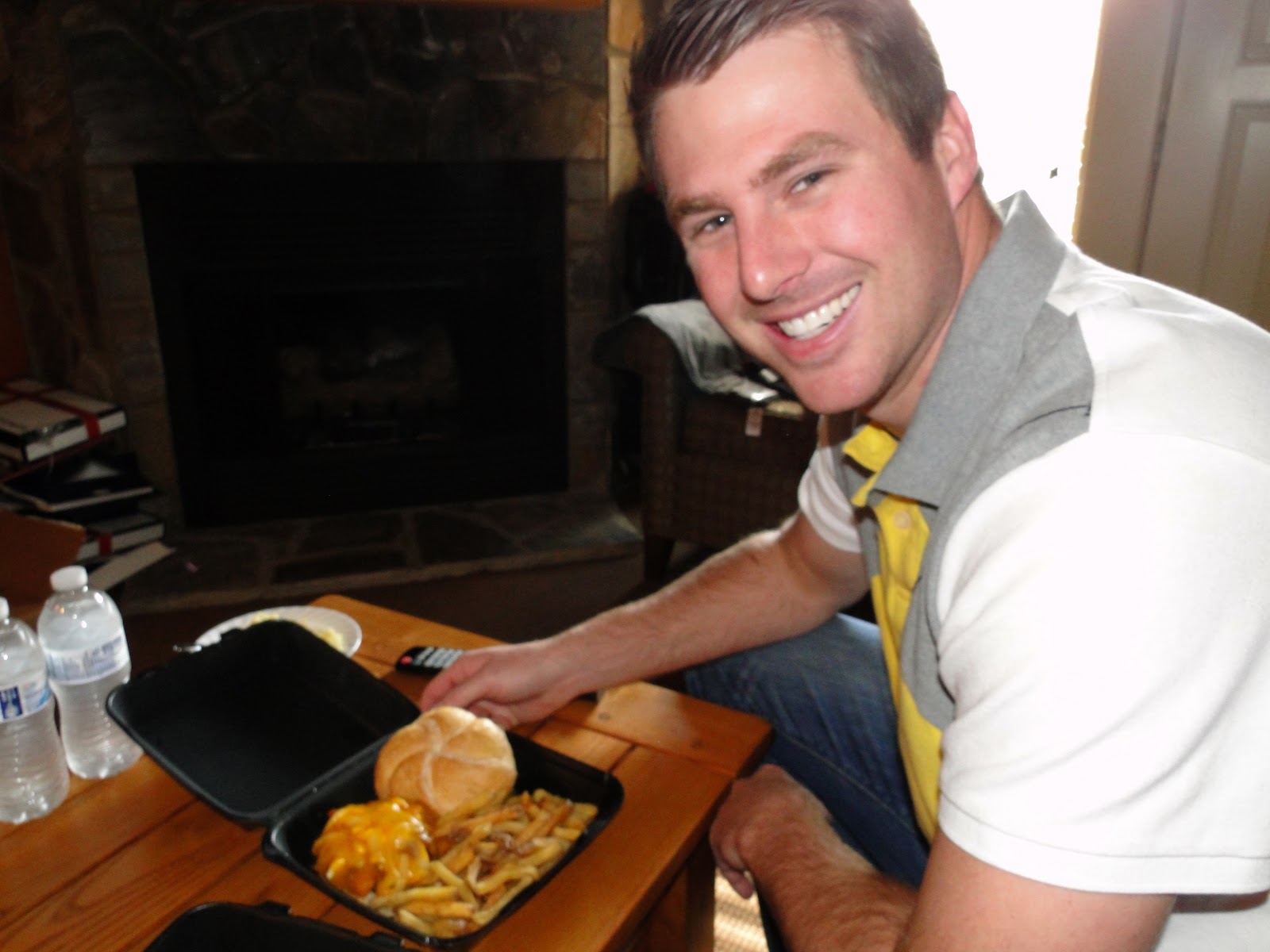 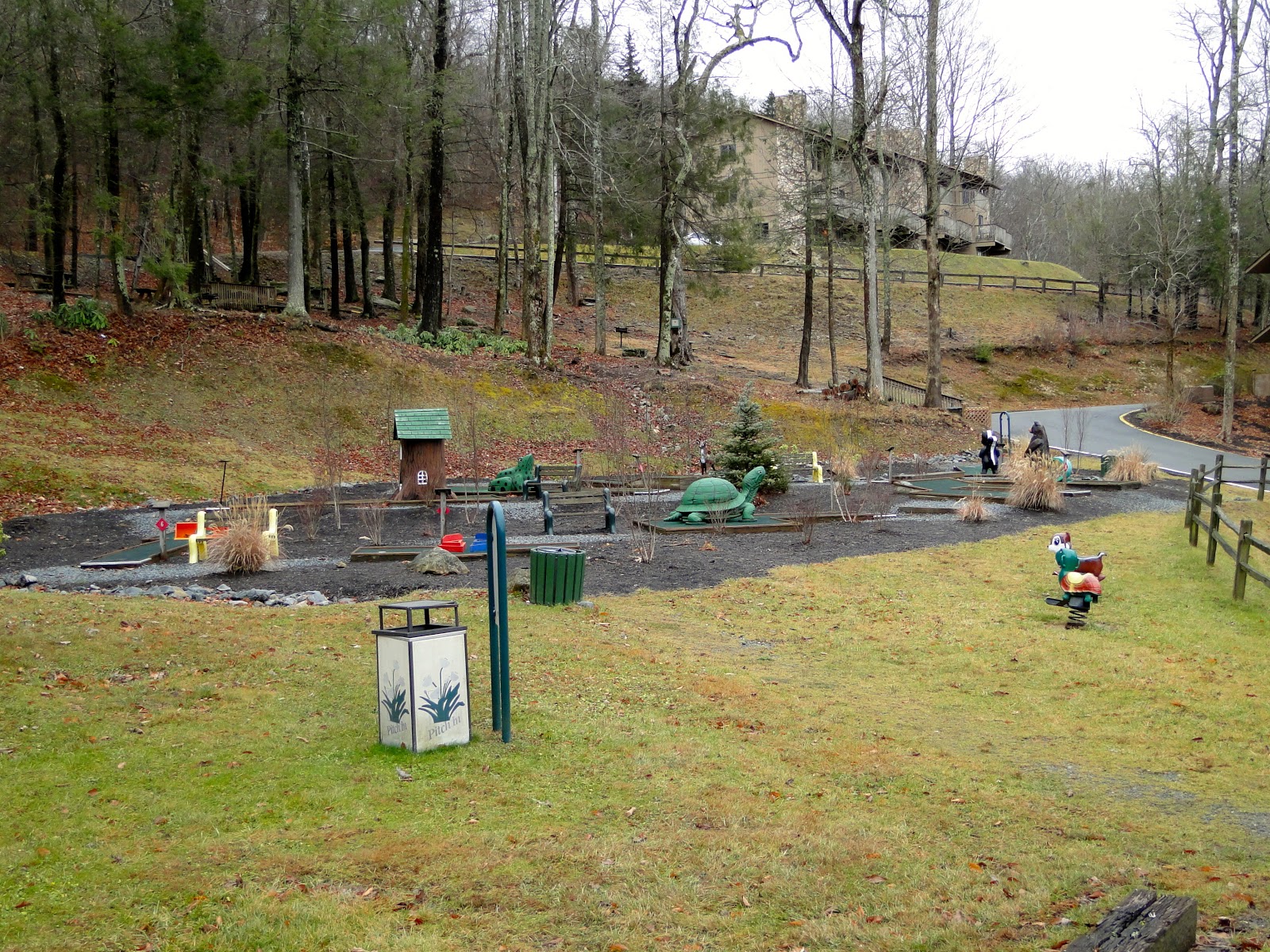 Of course Zach wanted to play 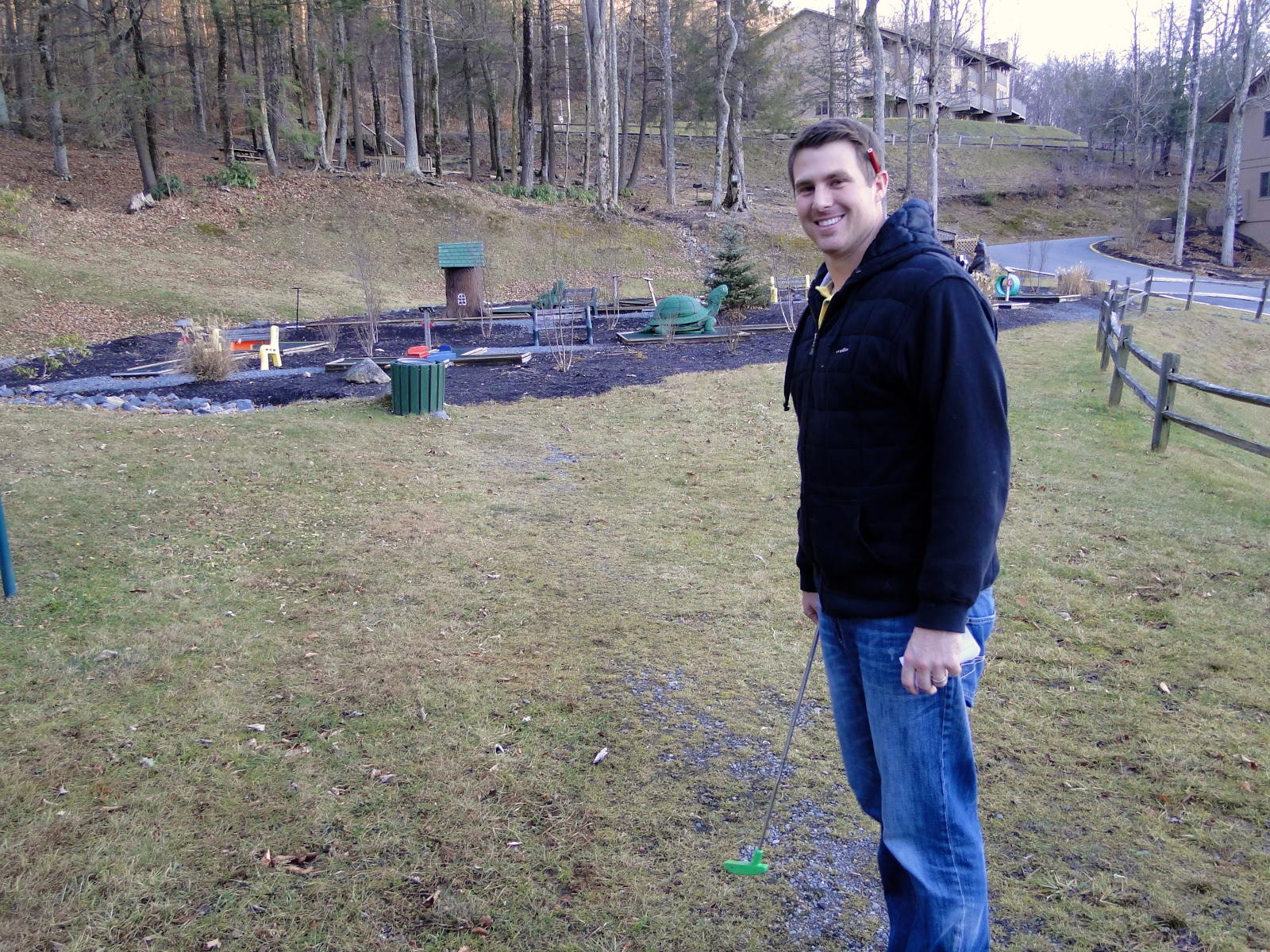 I humored him for two holes then just let him have at it on his own. It was FREEZING outside and with my walking boot on my toes were cold 😉 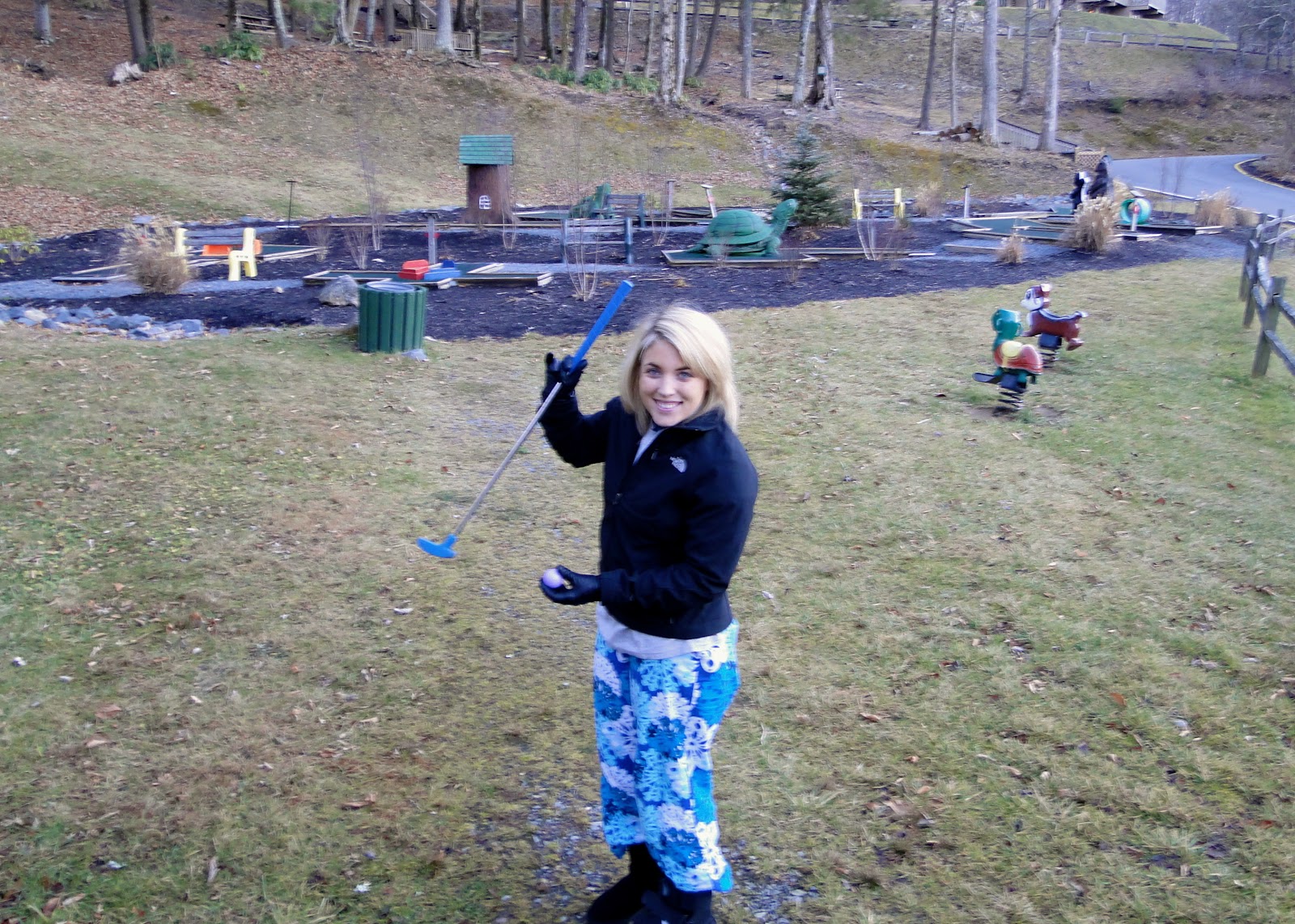 When he went to the main office to get the putt putt supplies he also picked up Scrabble. I think it’s HILARIOUS that we LEGIT played SCRABBLE. You know we were running out of options at that point haha I can’t even remember the last time I played Scrabble…can you!?!? 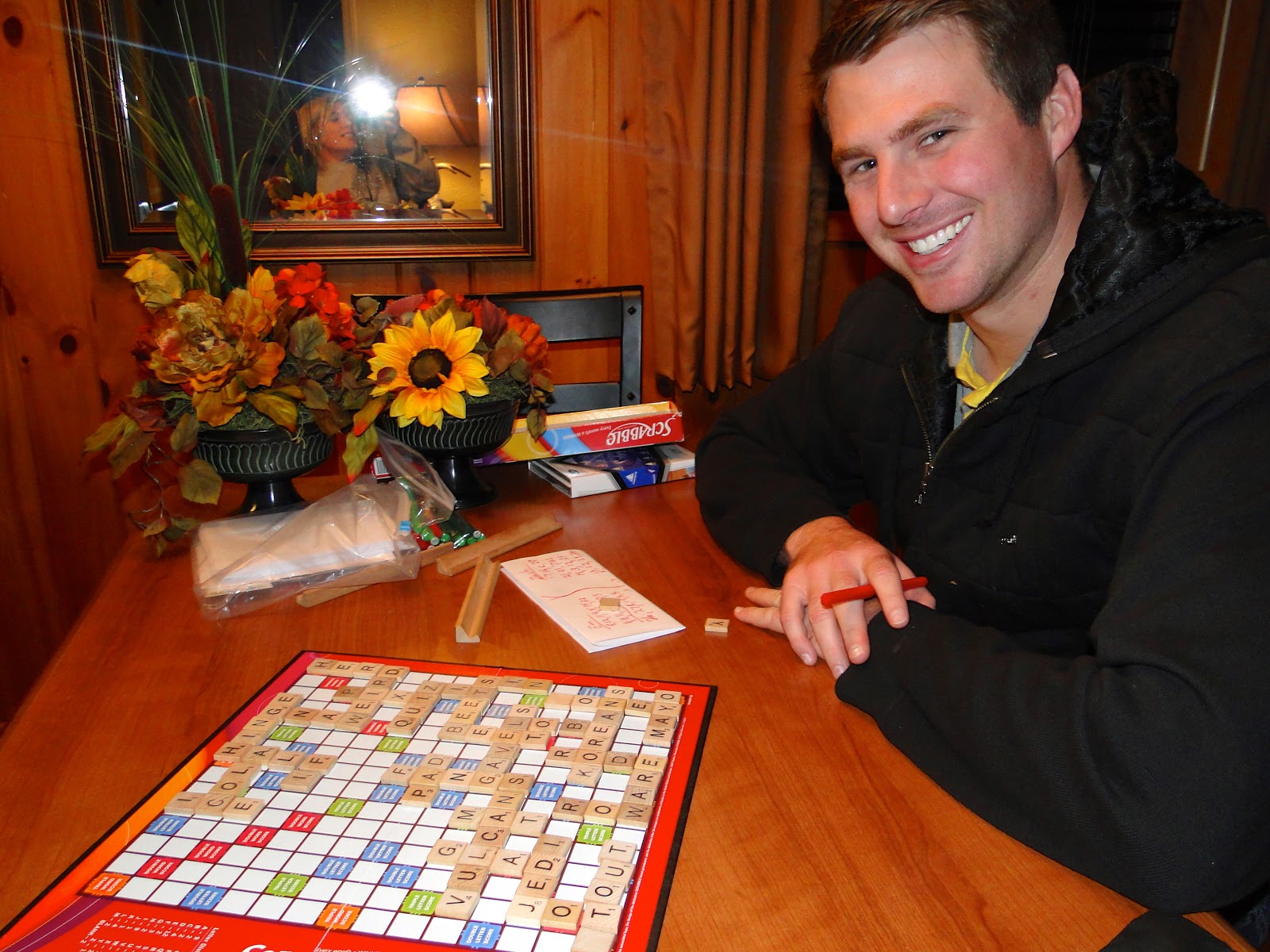 Our finished bored…isn’t it funny that the older you get the dumber you also seem to get? I swear I couldn’t think of ANY big words. All my texting has ruined my vocabulary 😉 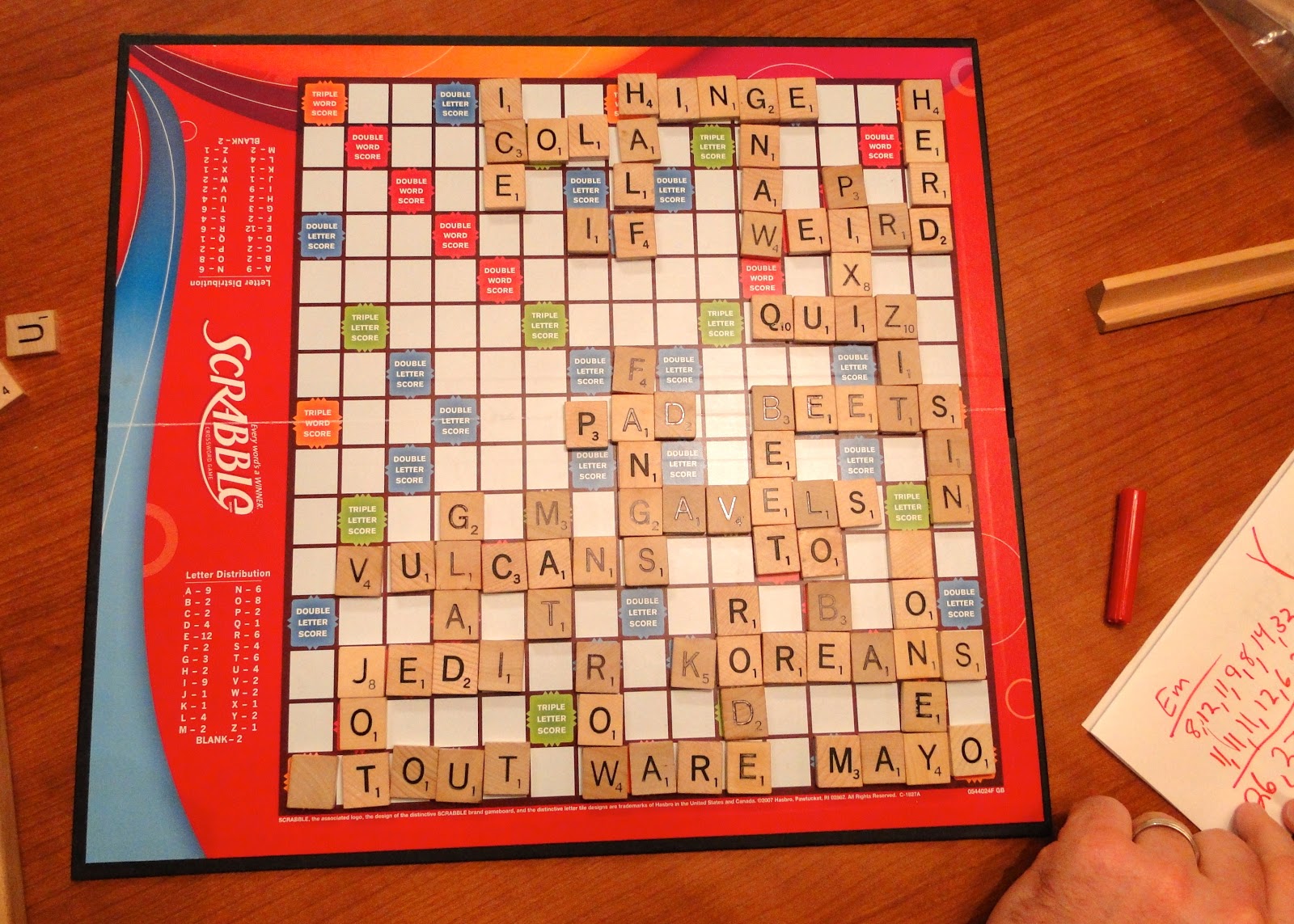 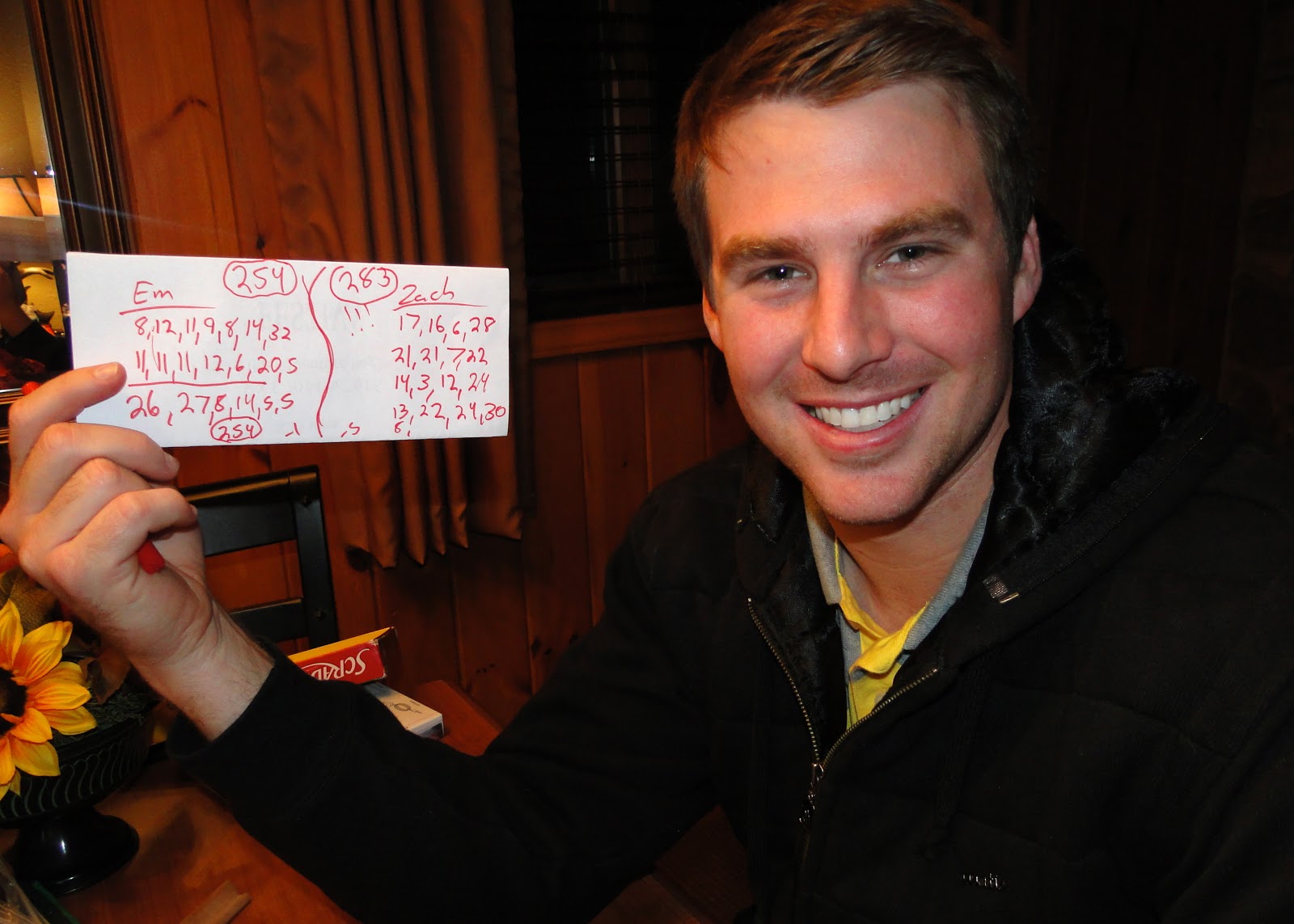 We took our time showering and getting ready for our fancy night out. For Christmas I got Zach size 36 pants!!! He’s been a 38 since I met him I think (he’s got that big Parker booty…). Thanks to Advocare he’s down to a 36 and all of his new jeans and pants look SO GOOD on him!!! I even found him a pair of gray pants from Express! So awesome 🙂 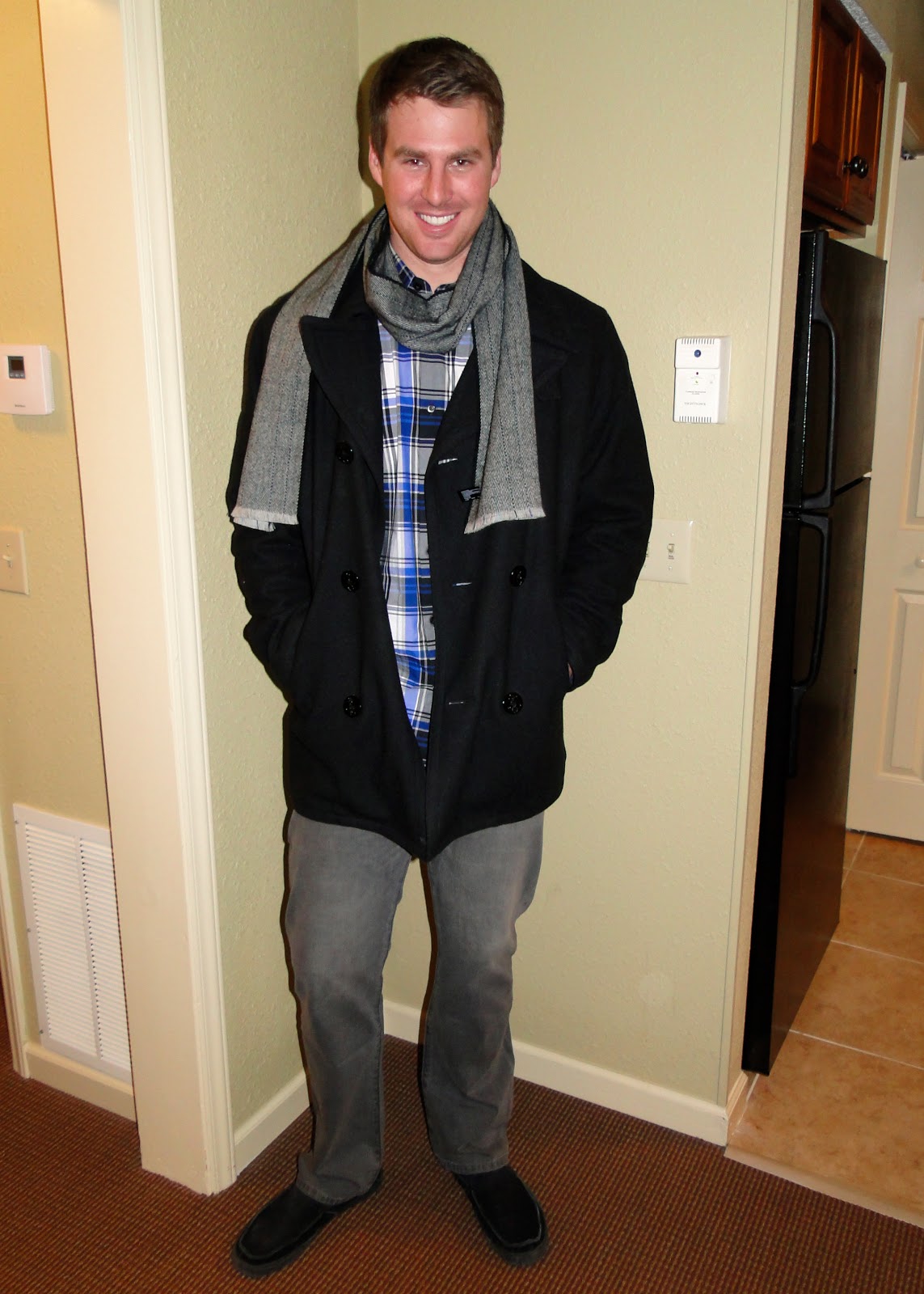 This was the most expensive thing I bought on our UOT trip! I threw a long sleeved black shirt under it to make it more weather appropriate 😉 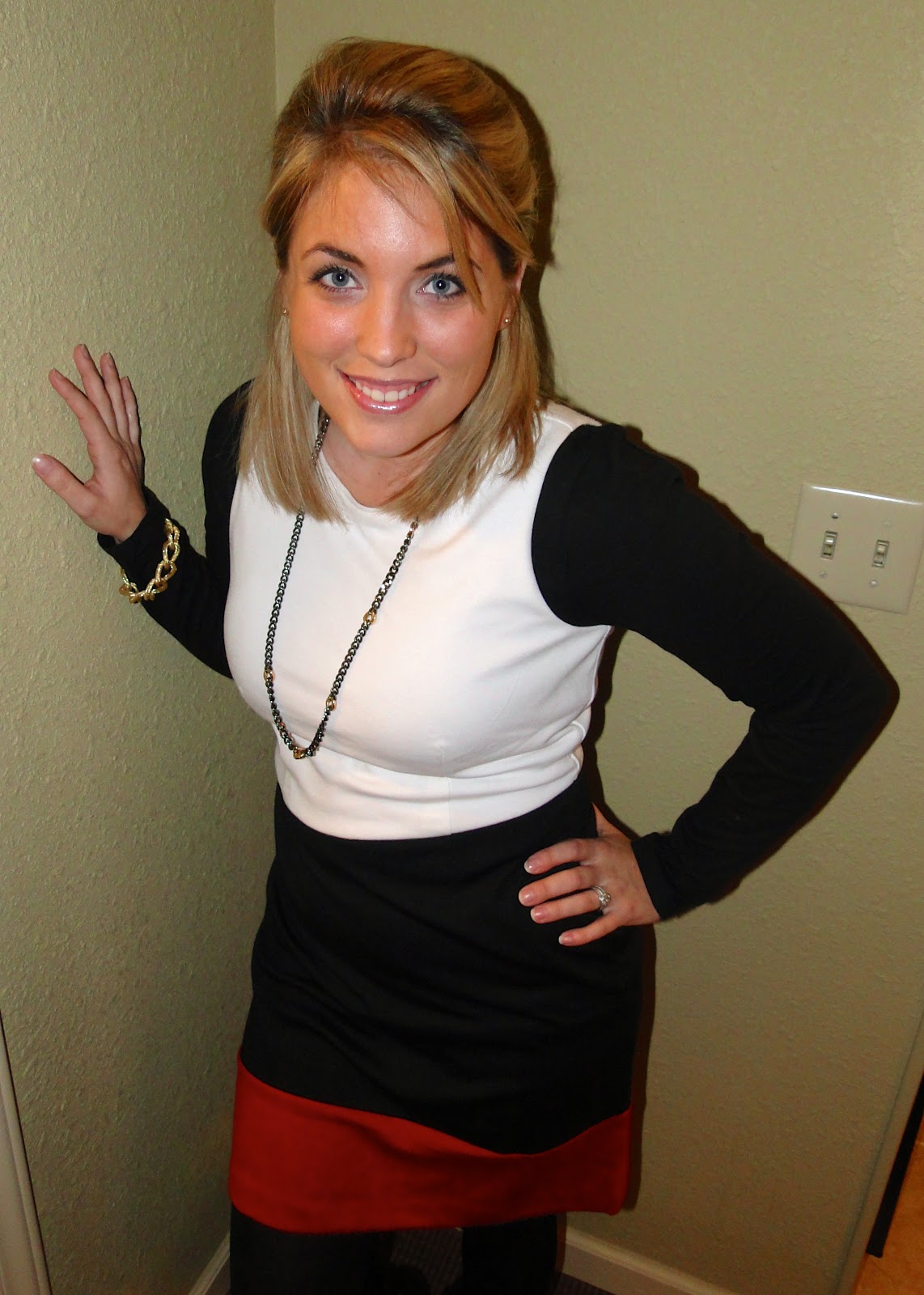 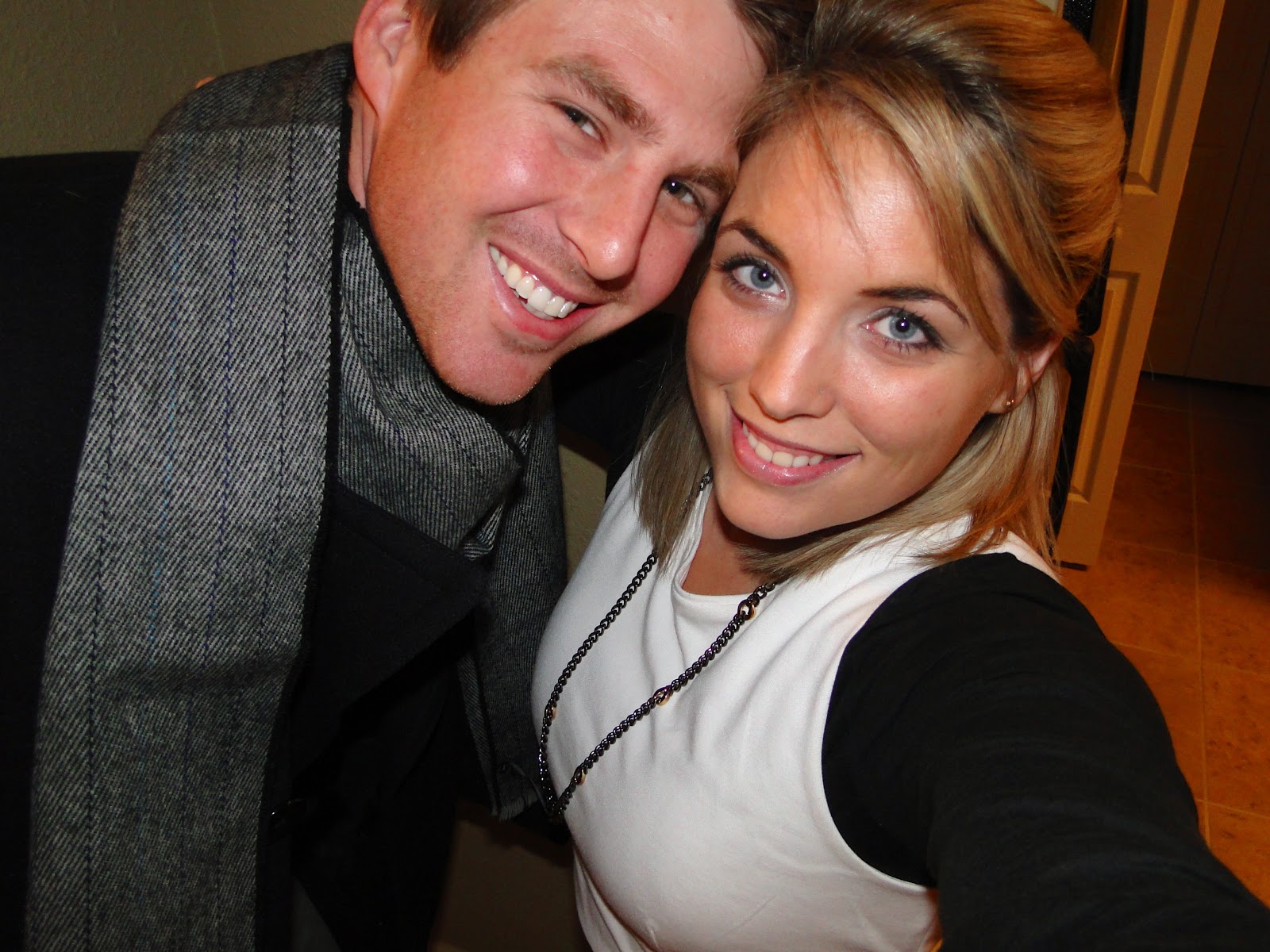 I cannot remember the name of the place we ate?!?! I can’t tell what Zach ordered either…pasta maybe? 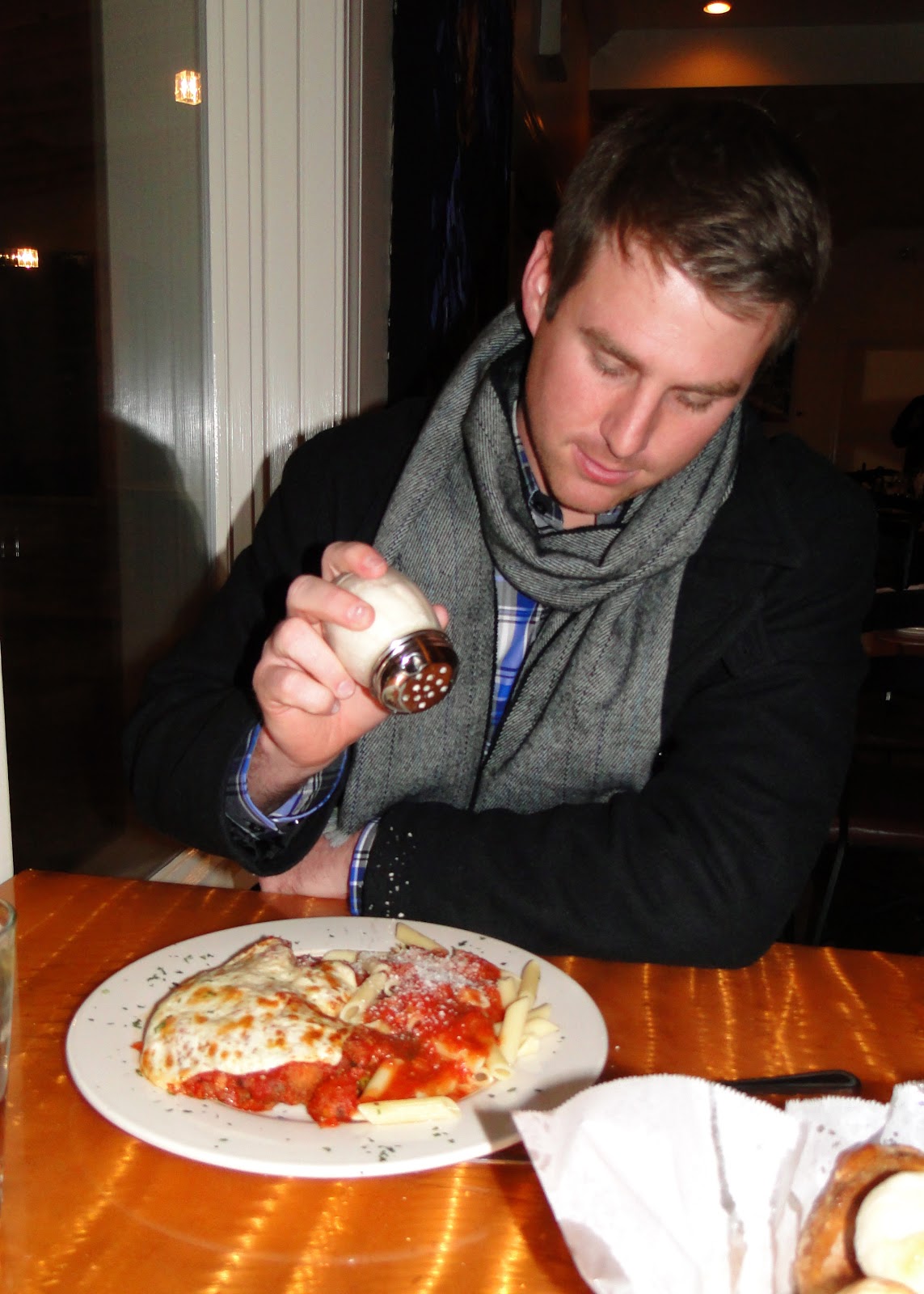 I got chicken with lemon sauce and capers. Seriously this is my go-to meal at any restaurant. I LOVE IT!!! 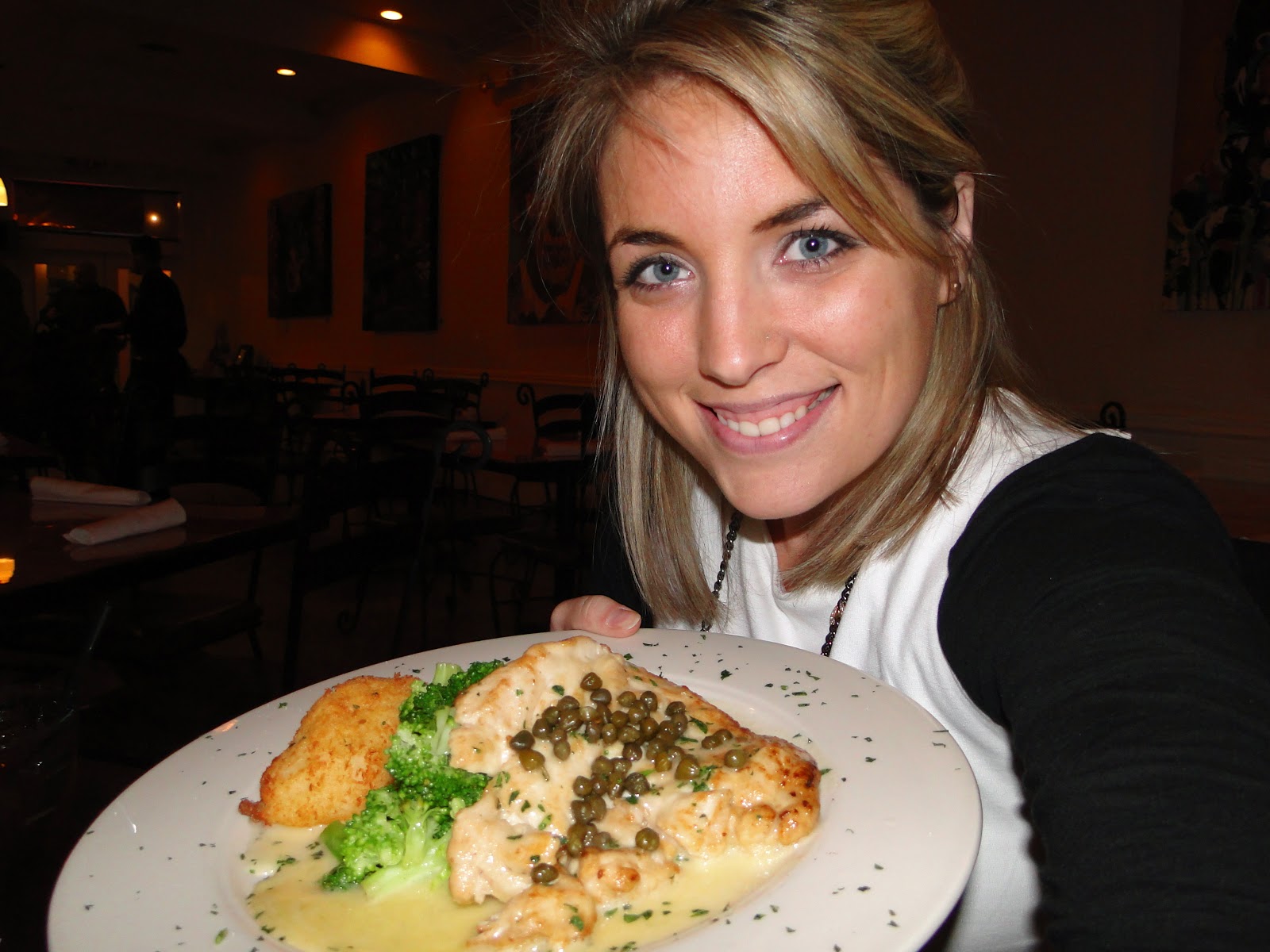 We had such a wonderful trip! We got up early the next morning to head home because I wanted to be back in Valdosta in plenty of time to get the kids from Mrs. Charlotte’s after their naps and get back to our house before dark. I know that’s random but 1) I have trouble seeing to drive in the dark (thanks lasik!) and 2) I get scared being home alone and coming home to an empty house in the dark. Within about 30 minutes of leaving we got pulled over!!! Seriously, it has been YEARS since I’ve been pulled over. It was such an antsy feeling!!! Even though we had NO CLUE what Zach had done wrong you still totally feel guilty haha. He was speeding (hello big hills in the mountains…kinda hard to go the speed limit!) but, of course, got lucky and only got a warning. Whew 😉 We stopped through at Rachael’s so Zach could get his car and I could have stayed with her for a few more days just hanging out and catching up 😉 I made a pretty quick drive home and was excited to see my babies! It was a VERY relaxing vacation and, while I’m sad we couldn’t ski, I’m thankful for the quality time I got to spend with my sweet husband. Hopefully it’ll be better ski weather for next year’s trip!