After Kye’s 1st successful year at school last year, I was looking forward for him to get to go back to school this year. We debated about what to do this year…his teachers from his last year’s class moved up to teach the three year old class. BUT they decided to teach the 5 day class. Most of Kye’s former classmates moved up with his teachers to the five day class…we talked about it but in my heart I just didn’t see the need for him to be at school for 5 days yet. Being a stay at home mom I really, really love the quality time I get to spend with my kids. I LOVE how much Kye likes school and I think it’s awesome for him to have a place to go…but I also cherish his time home with me and think it’s important for him and Brittlynn to spend quality time together. After school we rush for lunch, rush for naps, then only have a little time in the afternoon before Zach gets home and we eat dinner then put the kids to bed. So the mornings really are the biggest chunk of time I get with the kids! I’m not ready to let go of my Kye yet for our special time together!!!

Kye adored his teachers last year and I truly believe they were the PERFECT “first teachers” for him. I’m thankful for them and miss them this year…but I also felt it was important for Kye to have a new teacher and new classmates. Meet some new kids…experience that change of environment.

We got the letter in the mail for Kye’s Open House which they have the week prior to school starting. Zach decided to miss the first day (as Kye already had a real first day last year so there was no need for Zach to be there this time) but he wanted to make sure to be at the Open House. We both feel it’s so important for all of our children’s future teachers to KNOW US. We want to know what’s going on in the classroom and expect our children to behave as well as do their personal best in the classroom setting.

Open House was at 11 so we rushed around that morning getting ready and made Brittlynn a bottle to drink for her feeding. Zach moved some work stuff around and didn’t go to work until that afternoon so he could be there. We got up to the school with Kye SUPER pumped up and excited and the parking lot was empty. Like empty. Ugh. My heart sank into my stomach…I pulled out the sheet and sure enough we were a day early. Oops.

To my credit a TON was going on at the time. Zach had just been in the emergency room that weekend prior, remember? I was running on a super low amount of sleep and was struggling to catch up with everything. For some reason I had it in my head that the Open House was Wed Aug 8th when in fact it was Thur Aug 9th. Zach was NOT happy. I started to load up the kids and leave but then I turned around in the parking lot and decided just to give it a shot. I mean I would be embarrassed but honestly a little embarrassment would be better than taking home a crying child who was excited to go to school, a baby who was ready to eat, and a husband who really didn’t need to miss more work.

We unloaded the crew and went inside and sweetly explained our situation. All the staff was in a meeting but, thankfully, Kye’s new teacher came out to meet us! We got to see his new classroom and talk with her about what to expect this year. I had met her at Colt’s Birthday party as she taught him last year so we already semi-knew each other.

Our biggest concern going into this school year was the fact that Kye and Payton are in the same class. We adore Payton, of course, but Courtney had the same concerns we did. Our kids get together and can be pretty wild with each other and I worried how that would carry over to the school setting. I KNOW Kye is a well-behaved child and I didn’t want his teachers to have a different impression of him, ya know? We discussed it with his teacher and felt a lot better about the situation after Open House!

Even though I was so beyond mortified and embarrassed, it did work out well that we were a day early as we were in and out a lot quicker than I’m sure we would have been the following day. Everyone left a lot happier than when we came in that’s for sure!!! 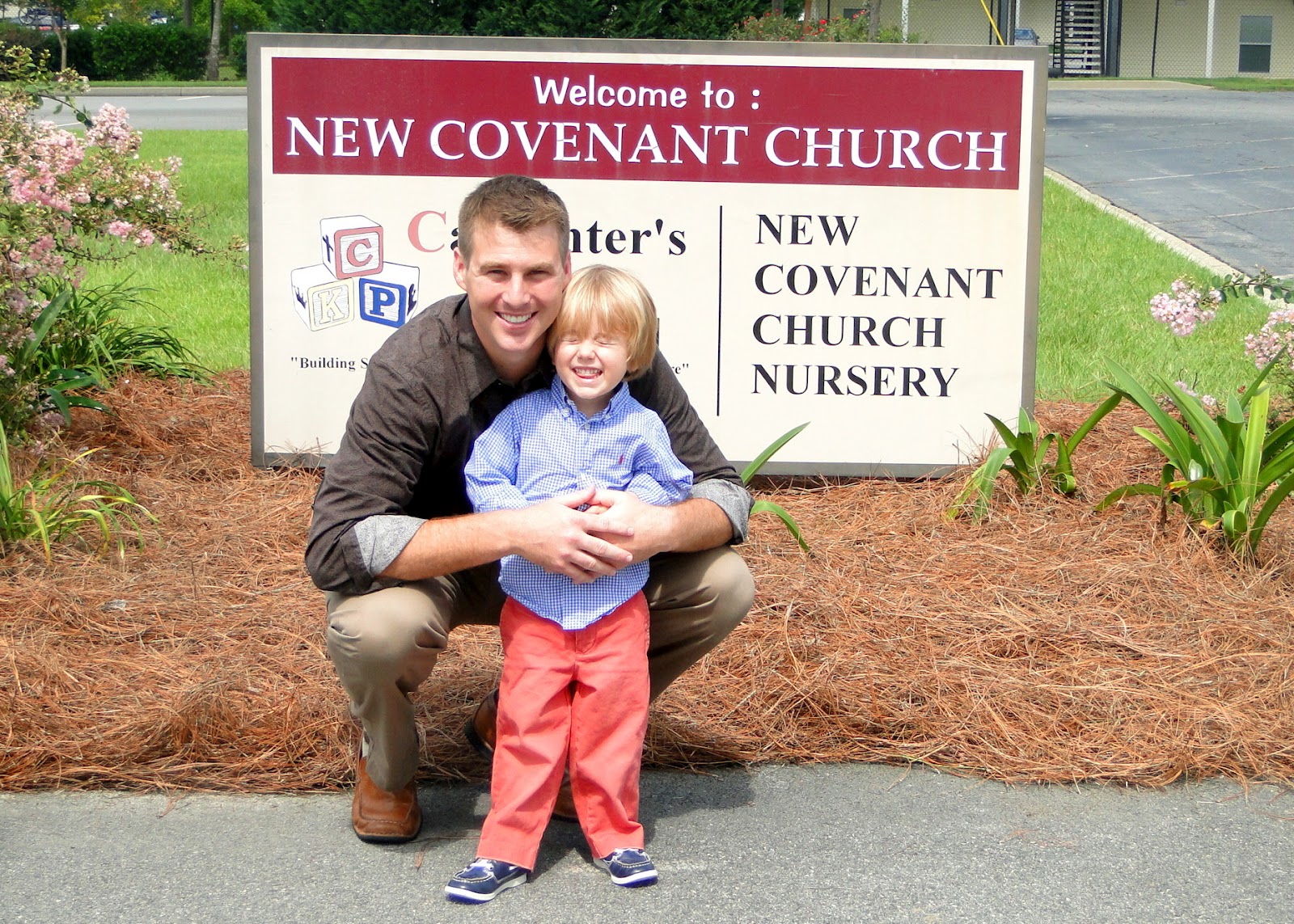 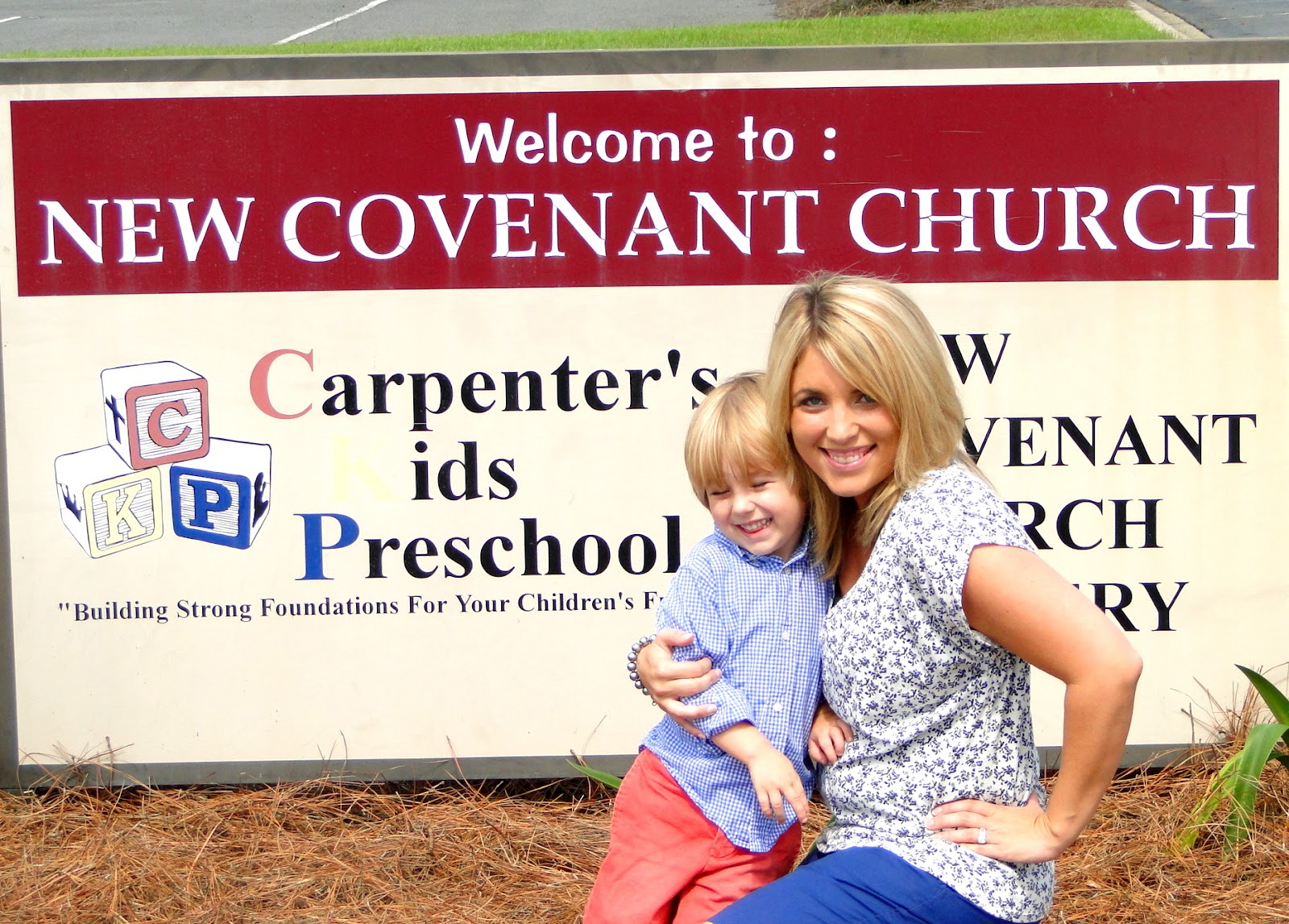 All summer Kye said he wanted to do one thing: eat Chickfila, donuts and ice cream. I really wanted to give him his dream day before the end of summer but reality is he’d NEVER be able to actually eat donuts then still be hungry for Chickfila and ice cream. We went to Chickfila on August 1st to show our support and got done so quickly that we went to The Mix afterwards for some ice cream. So that took care of those two summer dreams of his 😉 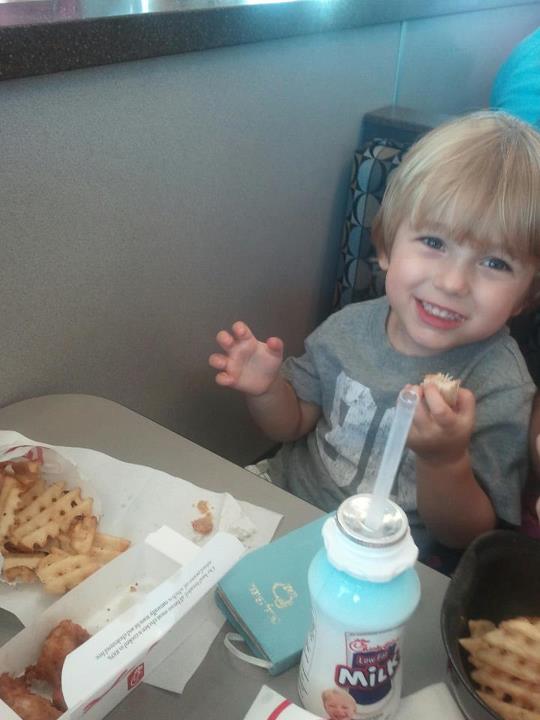 On the last day of summer I wanted to complete his one true wish…so we went and got donuts. I ran the kids up to Daylight Donuts right after I nursed Britt and we were home in time for her morning nap. Kye was in HEAVEN. He was sooo pumped about it! I was done with my 24 Day Challenge so I got myself a donut too 😉 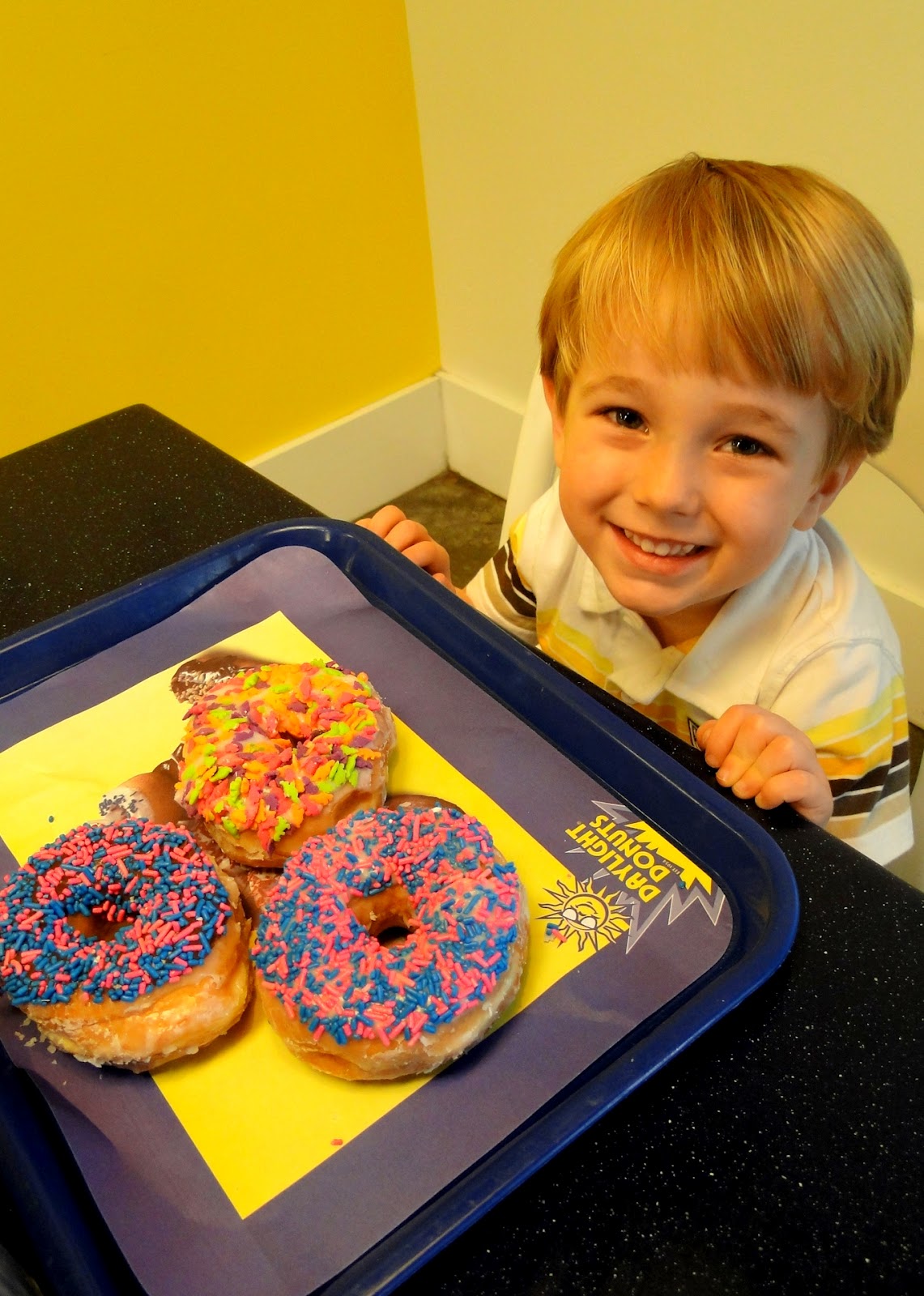 Brittlynn was the talk of the donut shop…turns out it’s a hang out for older people? They all LOVED seeing the kids there 🙂 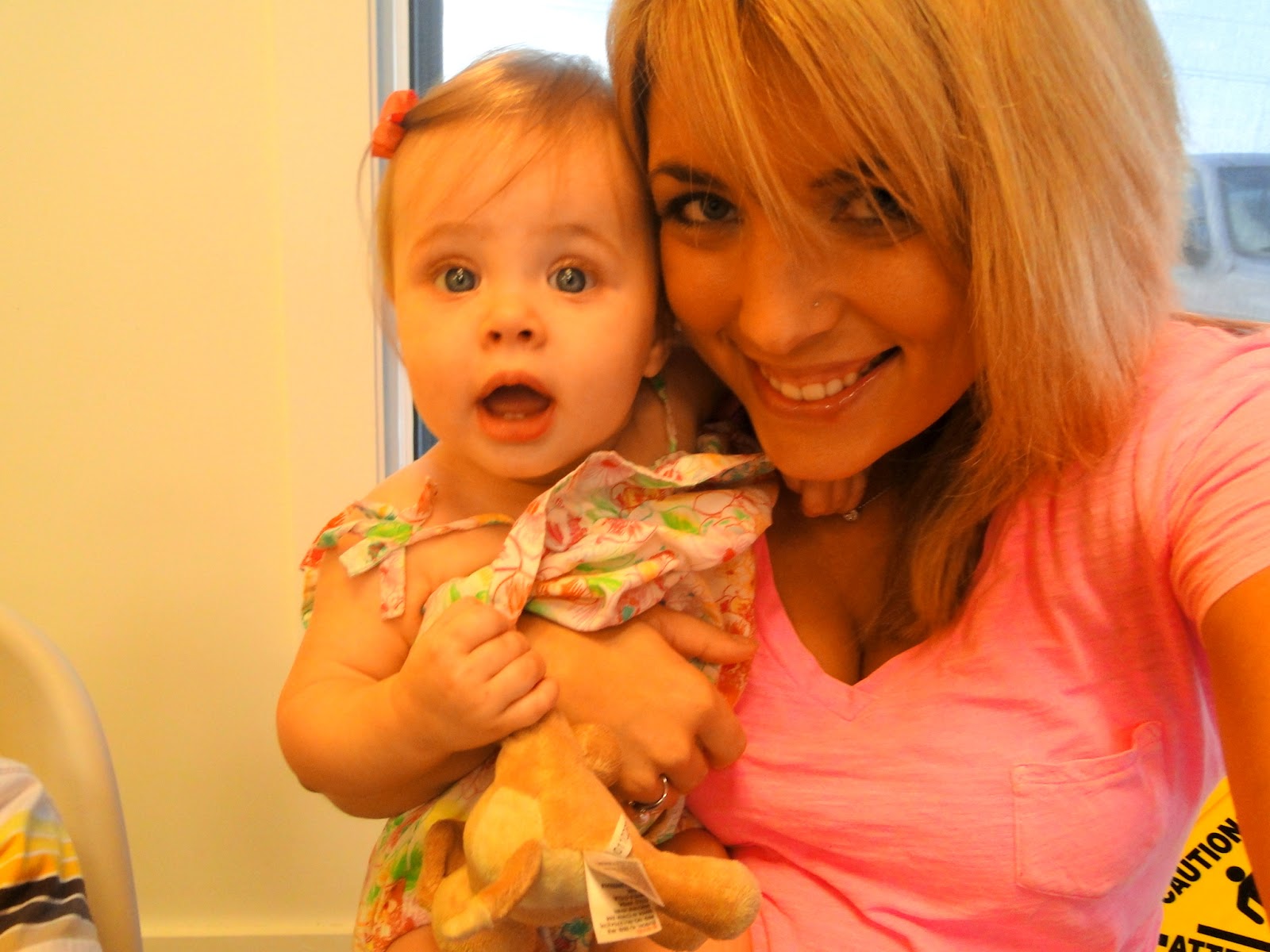 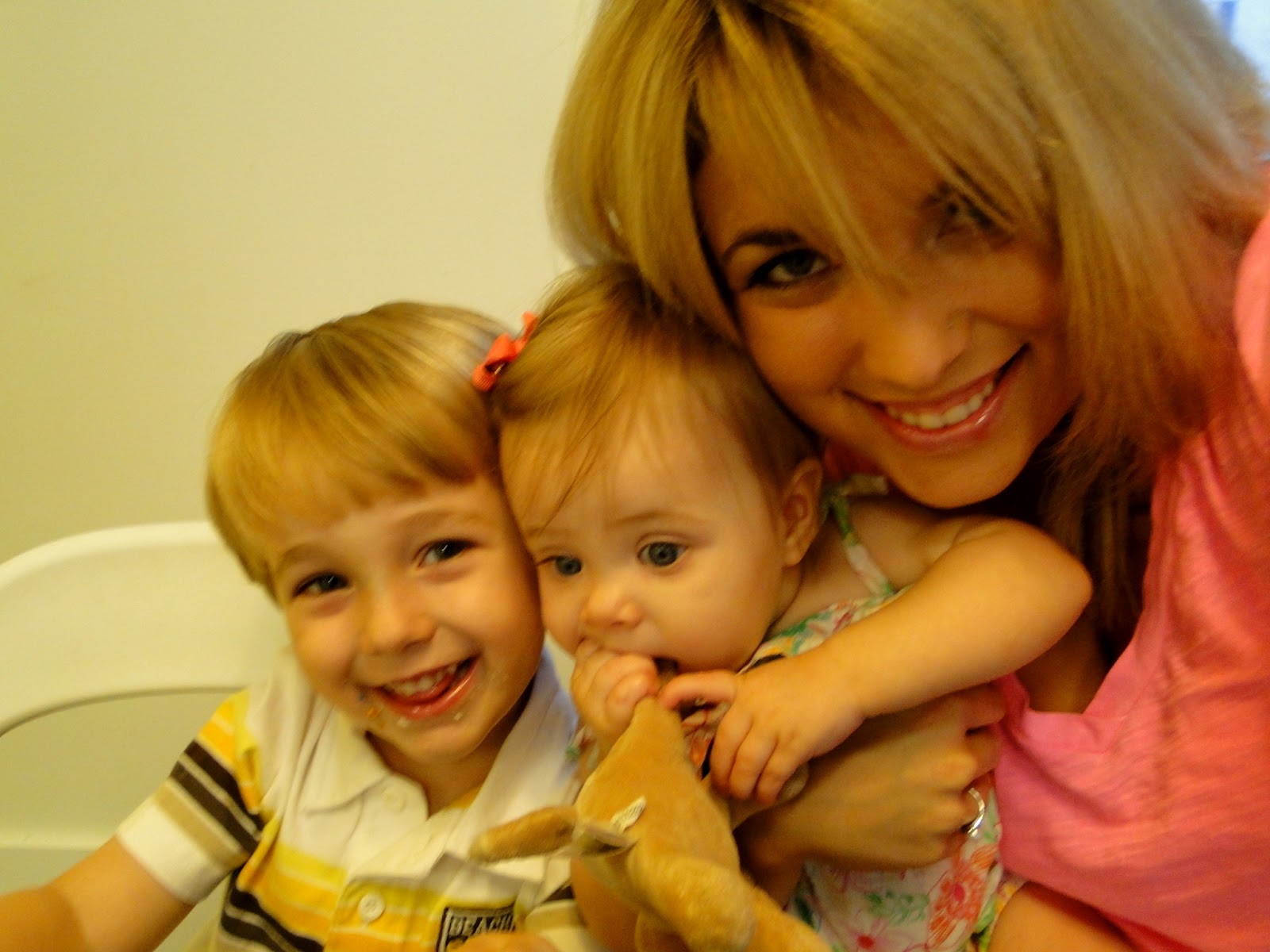 This year I didn’t take Kye shopping for a book bag. I did last year and Zach wasn’t a huge fan of the one we picked out. I swear Zach stresssssses me out. He is SO PICKY about Kye’s stuff. I worked like crazy at hunting down a book bag that was the right size for Kye’s age yet would fit Zach’s “not lame” requirements. Good luck!!! It’s an impossible task. I ended up ordering one from Pottery Barn Kids that looked like a rocket ship. I really liked it but when it arrived it was too small. Turns out their measurements on their website weren’t correct so they let me return it even though it was personalized (whew!). I didn’t have much time to find another one and Kye LOVES firetrucks so this one worked. And it’s the least lame one I could find. Zach said it does not pass his test but oh well. I tried! And Kye likes it…and it’s HIS book bag!!!

Ready for the first day of school! 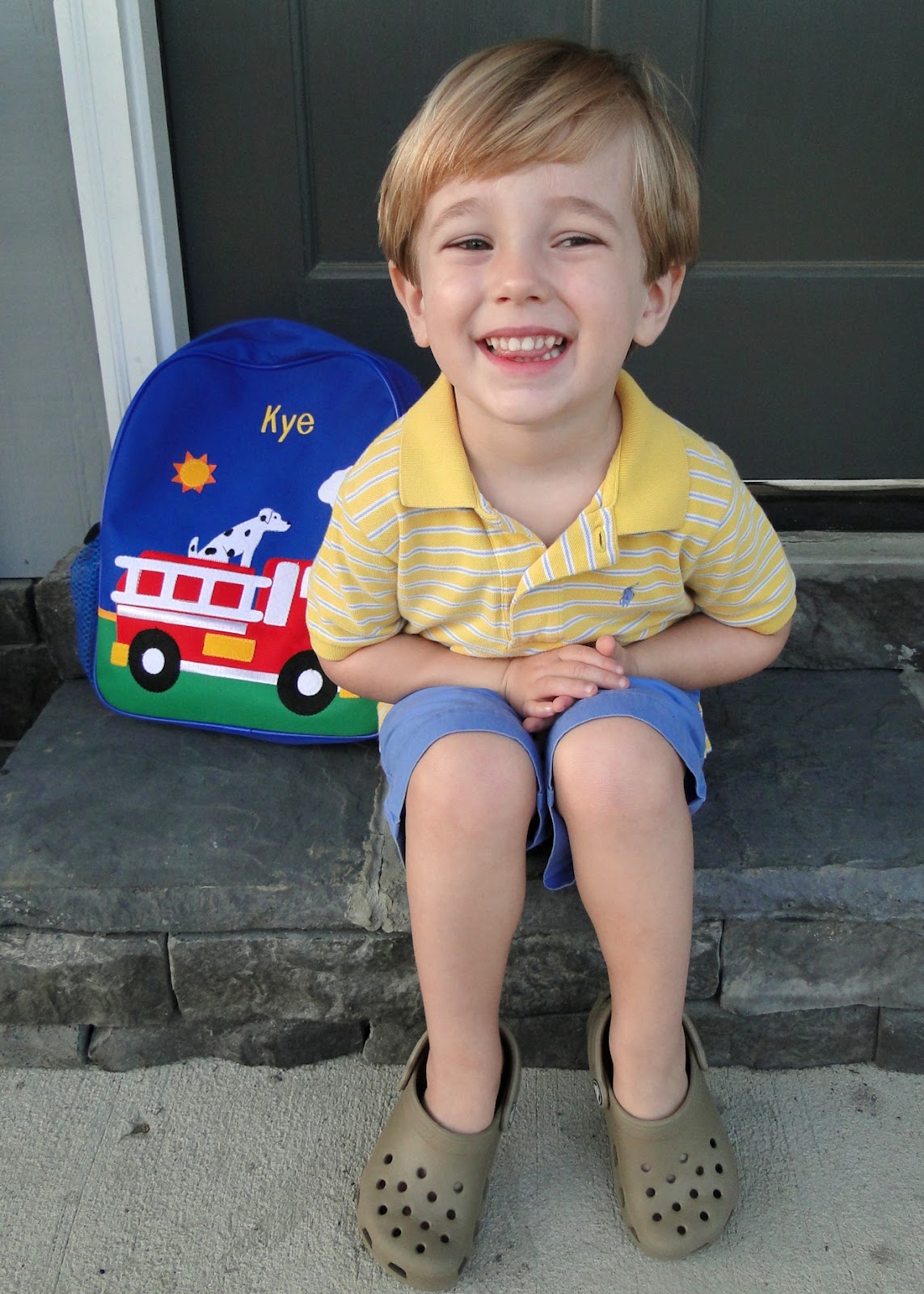 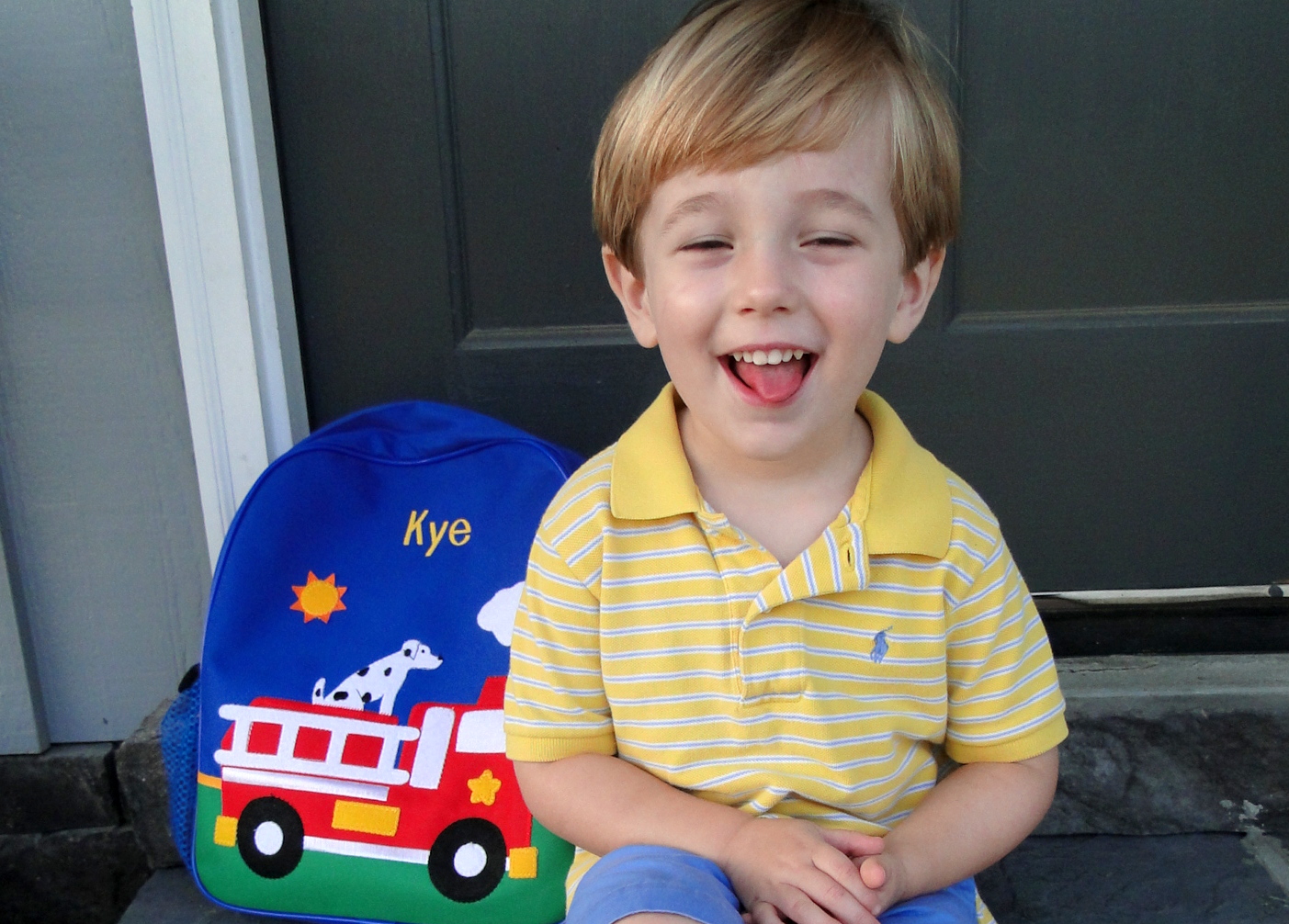 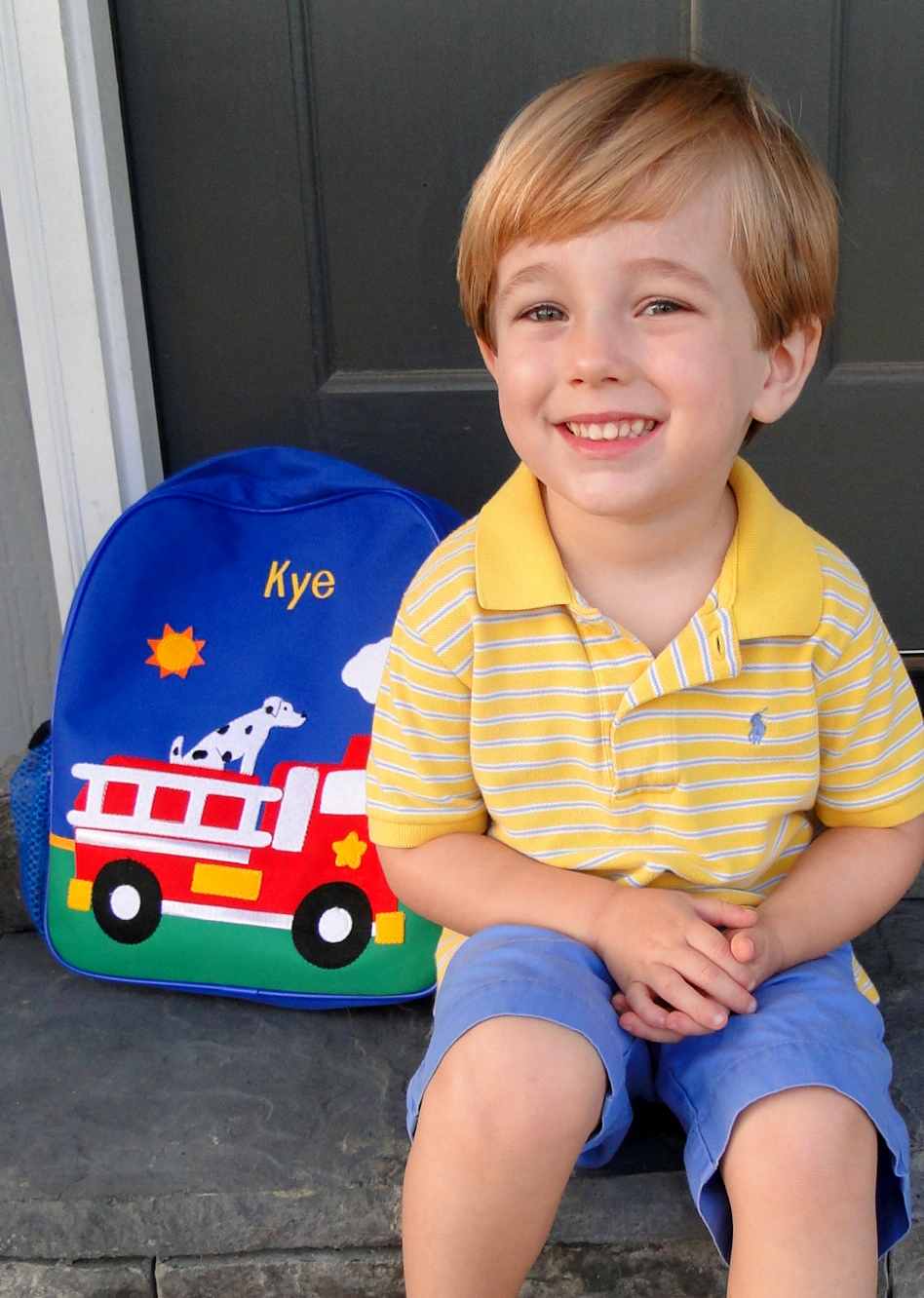 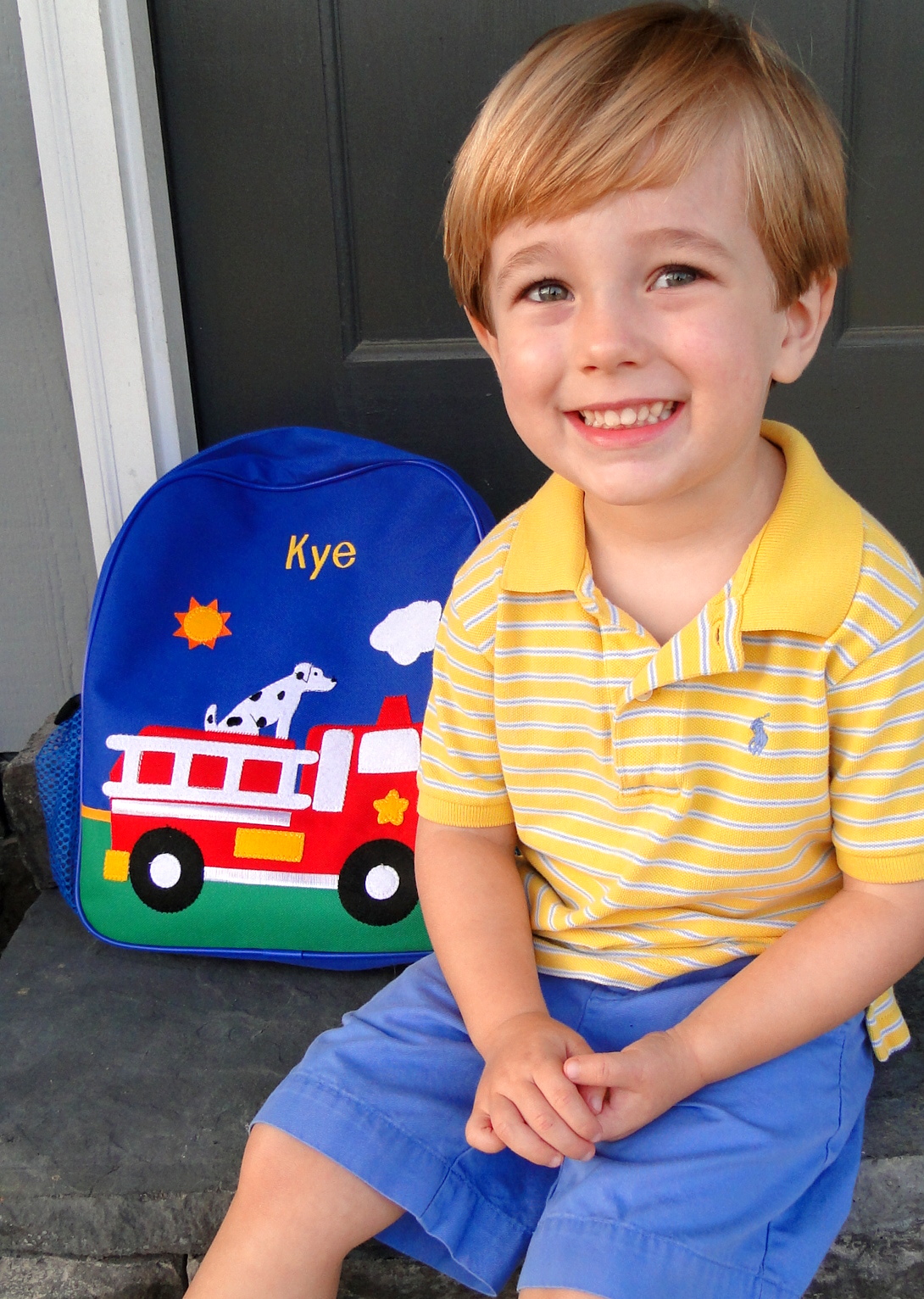 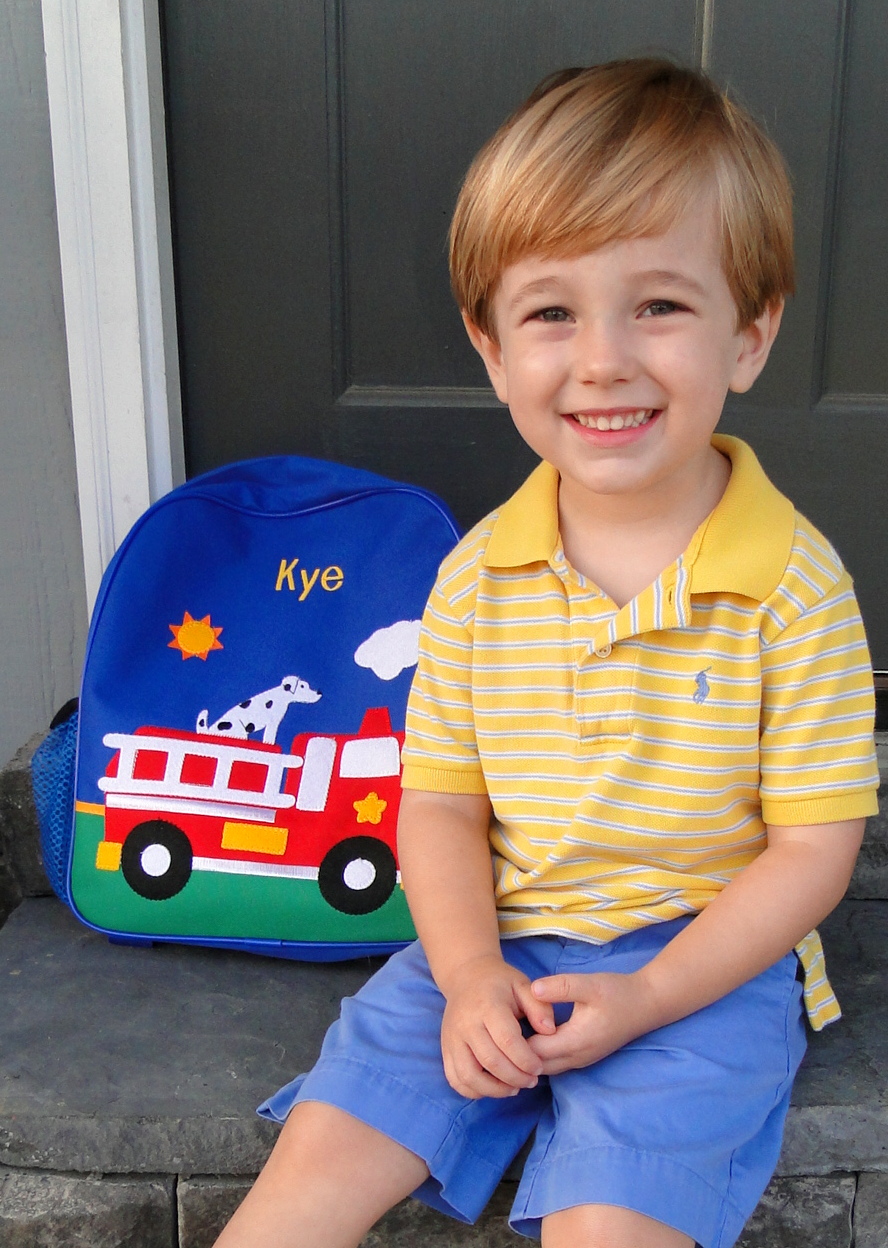 Tell me this child isn’t SO handsome?!?! 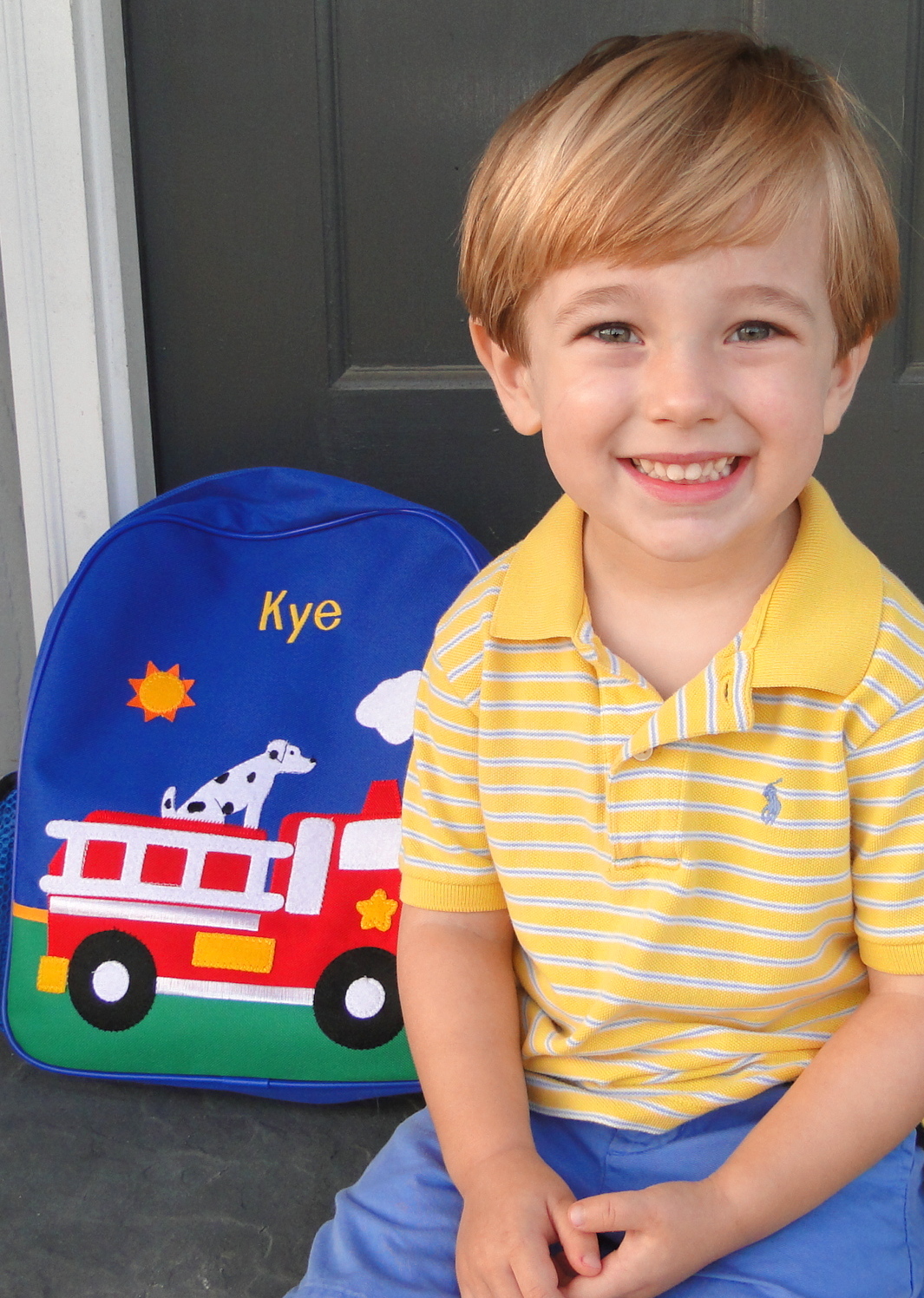 Excited about his new book bag! 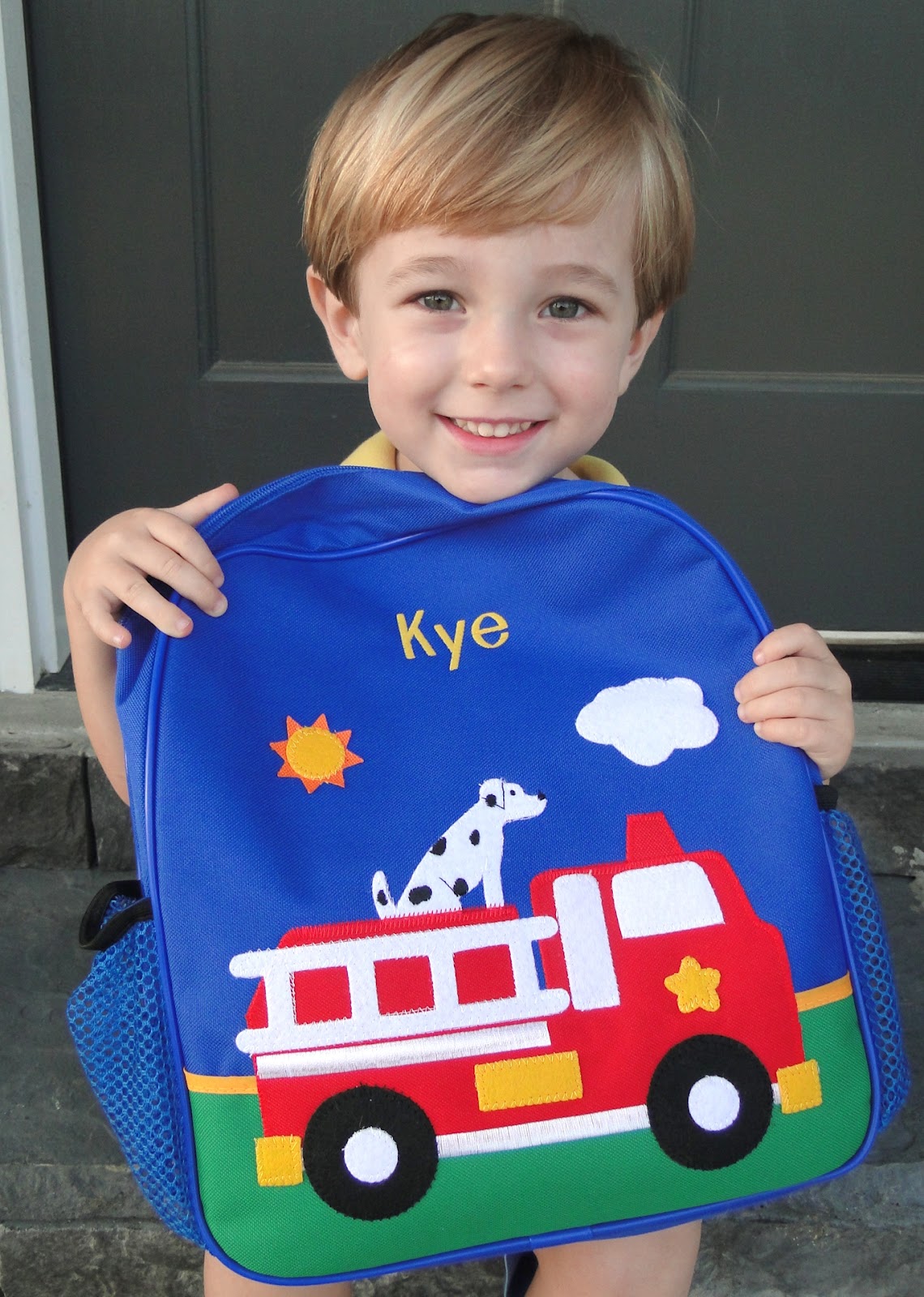 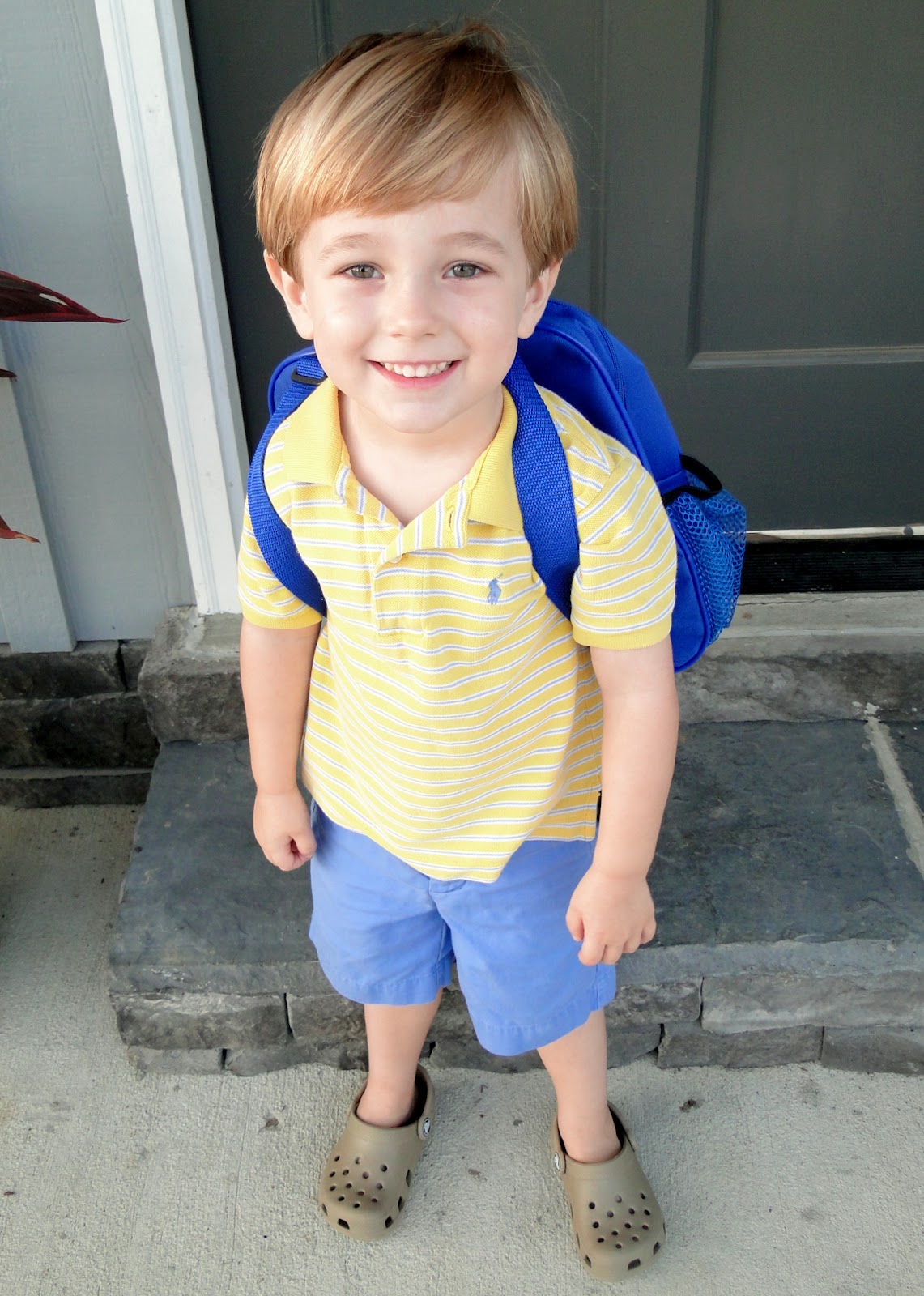 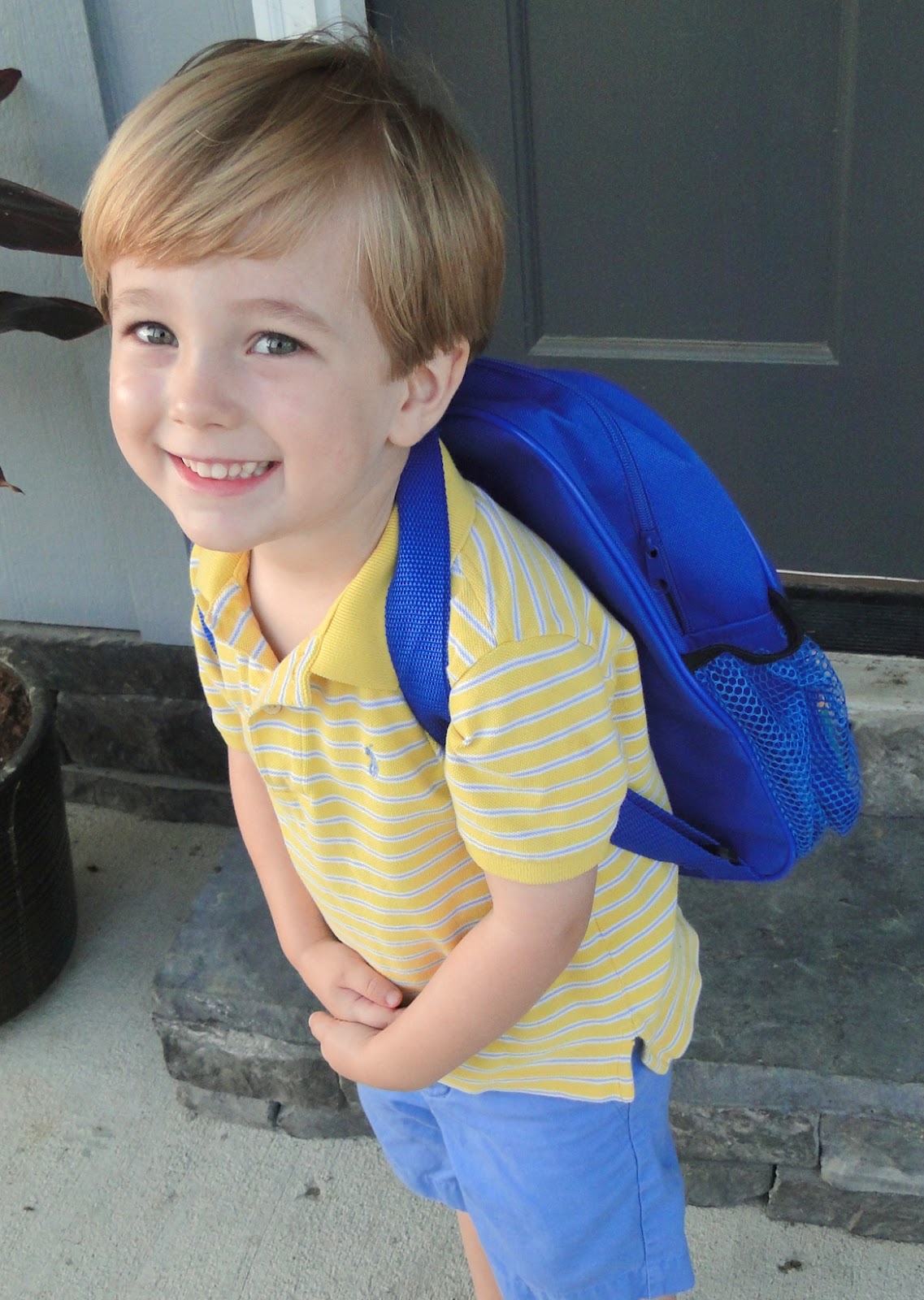 It was TOUGH when I first had Brittlynn because of her schedule it made it tough for me to take Kye and pick him up. Thankfully I had a lot of help to get me through and now that Britt is on the 4 hour schedule it’s not an issue! I feel guilty that her awake time is taken up with driving to and from school but we get out of the car for a bit so she enjoys seeing lots of different people 🙂

The first day of school Kye was SO excited to see Kailyn (his total girlfriend…she’s one of the only kids from last year who is in his class this year). He was also hardcore about the bag I sent with some classroom supplies the teacher had asked for. He refused to put it down. Michael is a friend from church as well but he’s in a different class than Kye. Hopefully next year all three of these cuties will be together!!!

It made me feel so much better to see Kye standing next to these two…Kailyn is 6 months older than Kye yet they are all three the same height. See…my child isn’t short!!! 😉 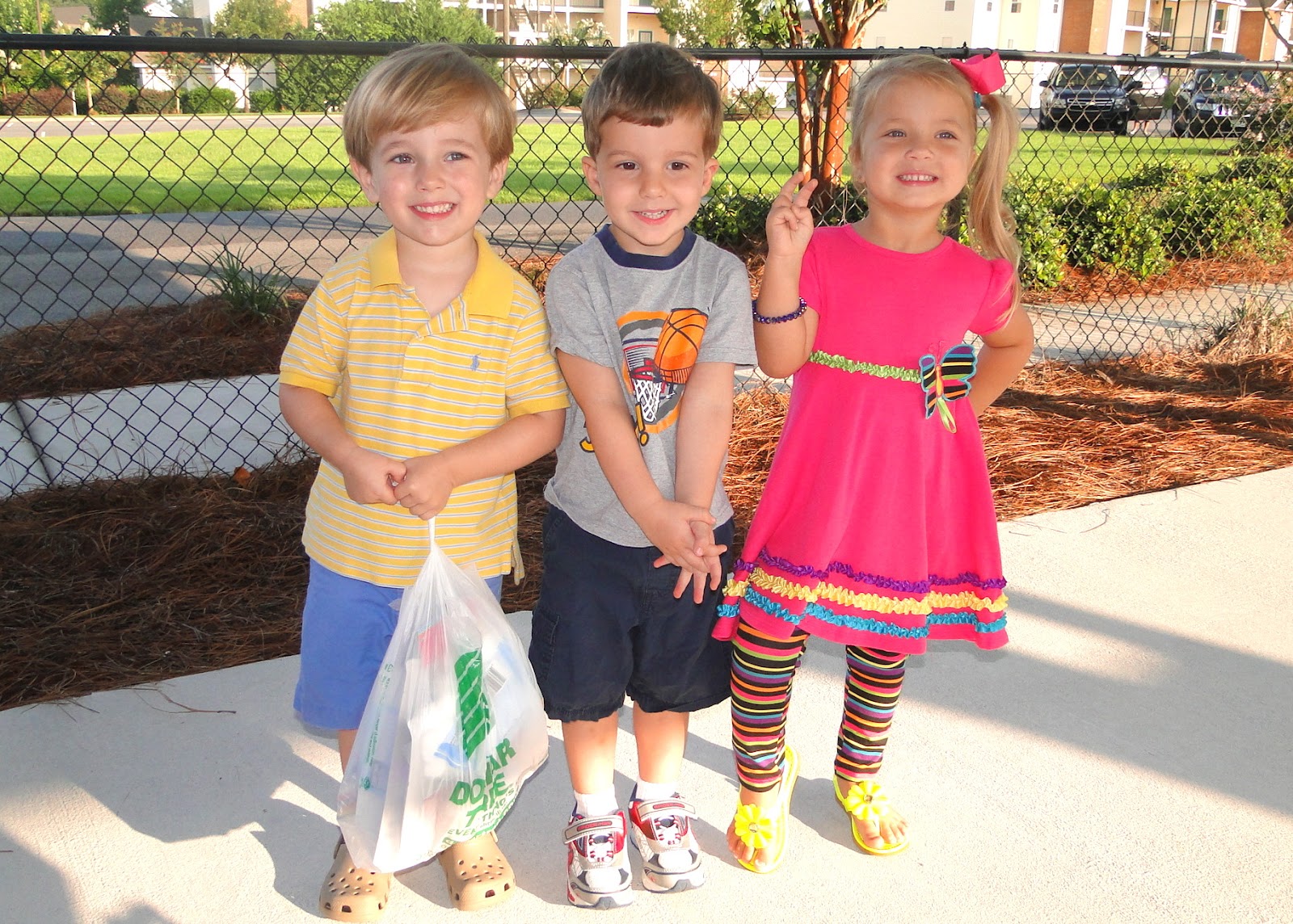 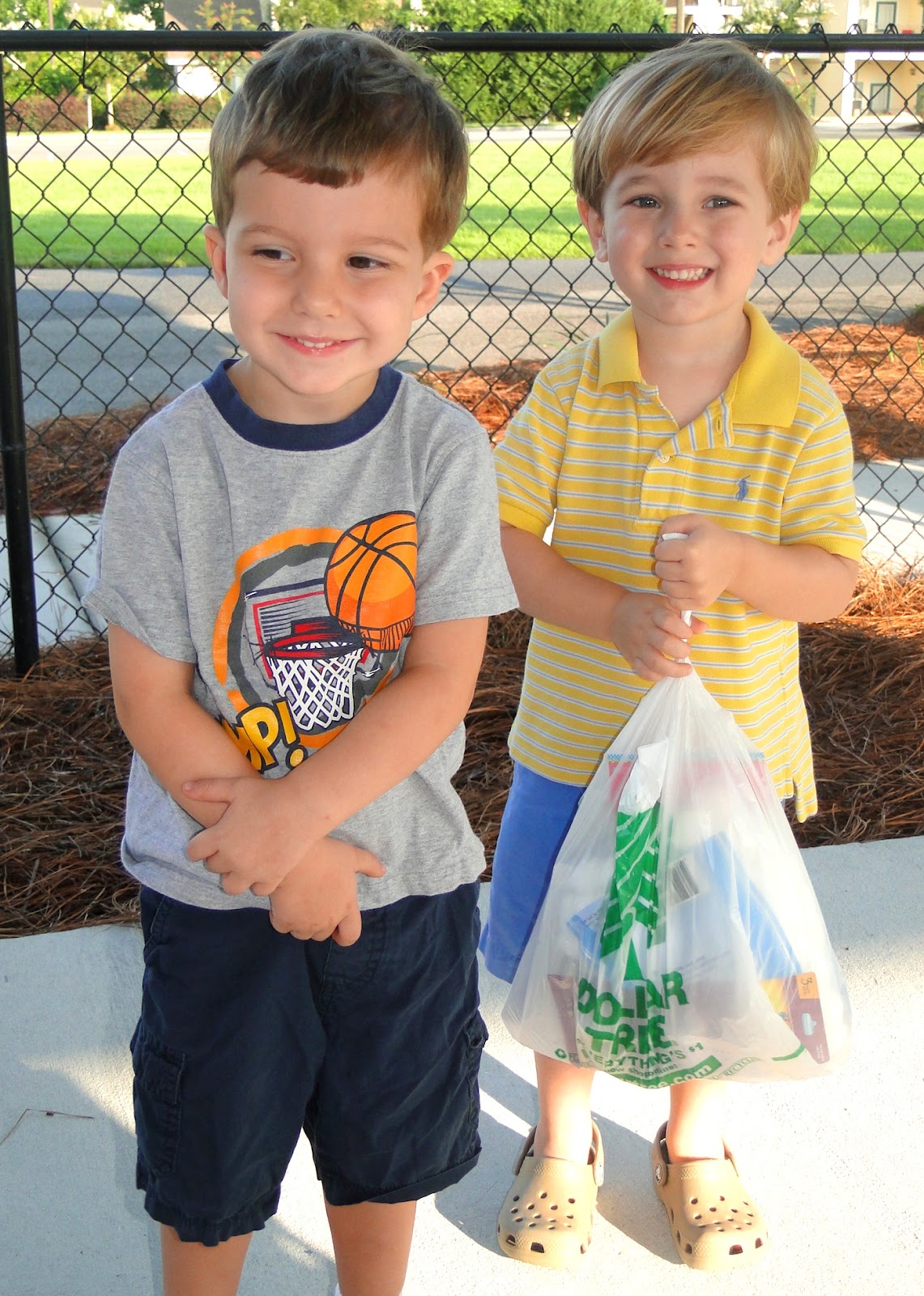 Now next to Colt Kye looks like a shorty huh?!?! Colt seriously looks like he could be a first grader he’s SO TALL!!! 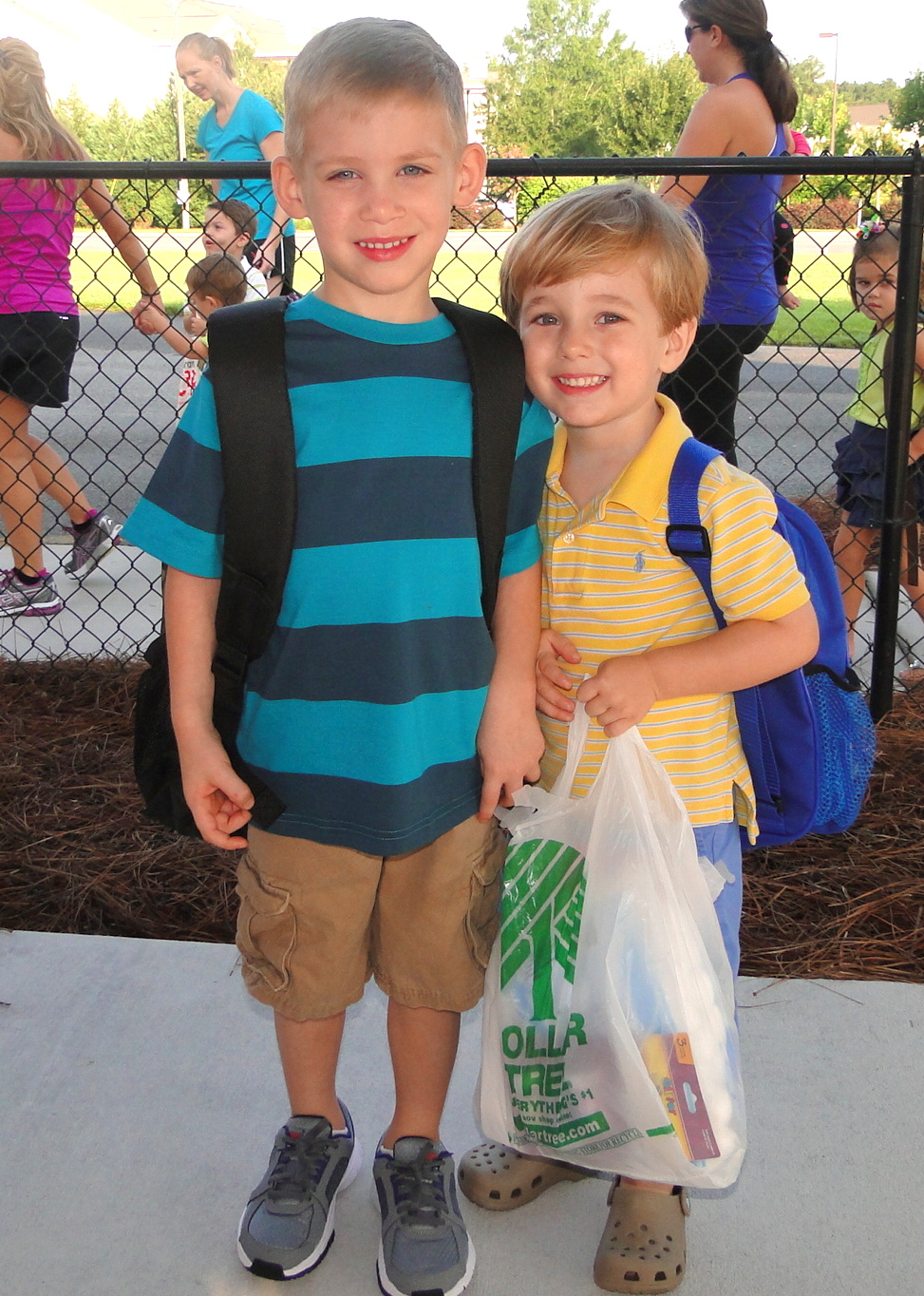 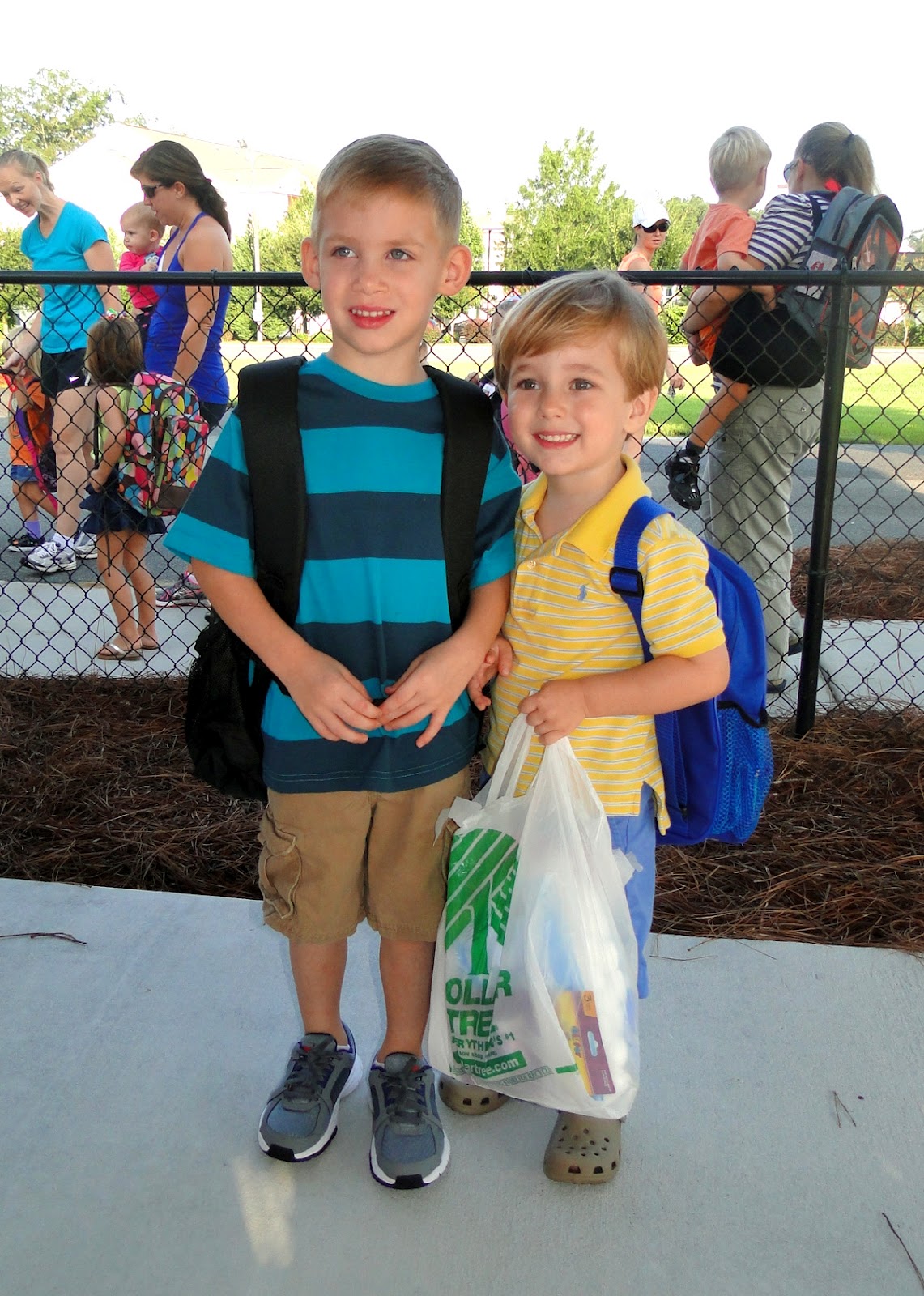 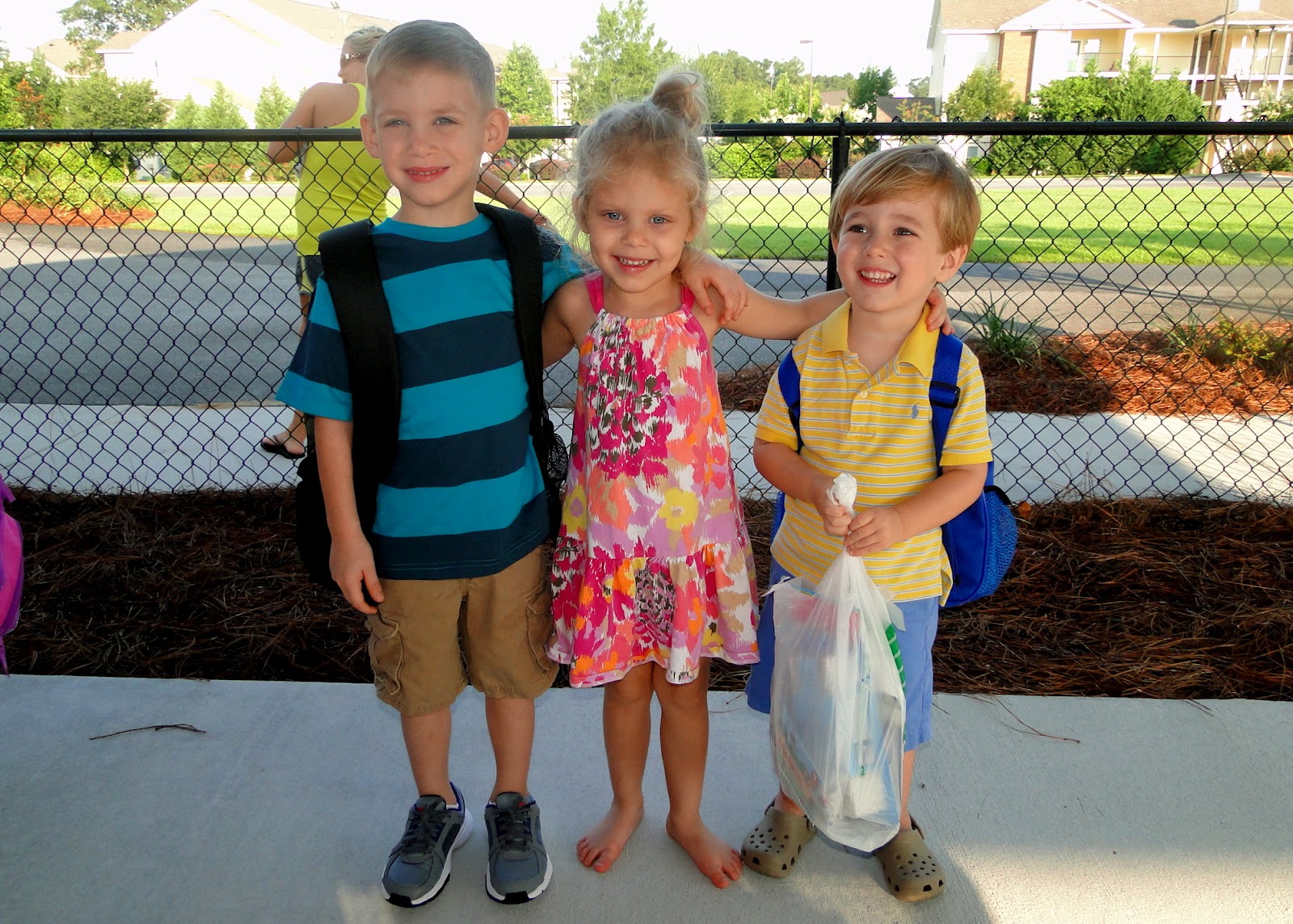 His seat at the “Tiger Table” 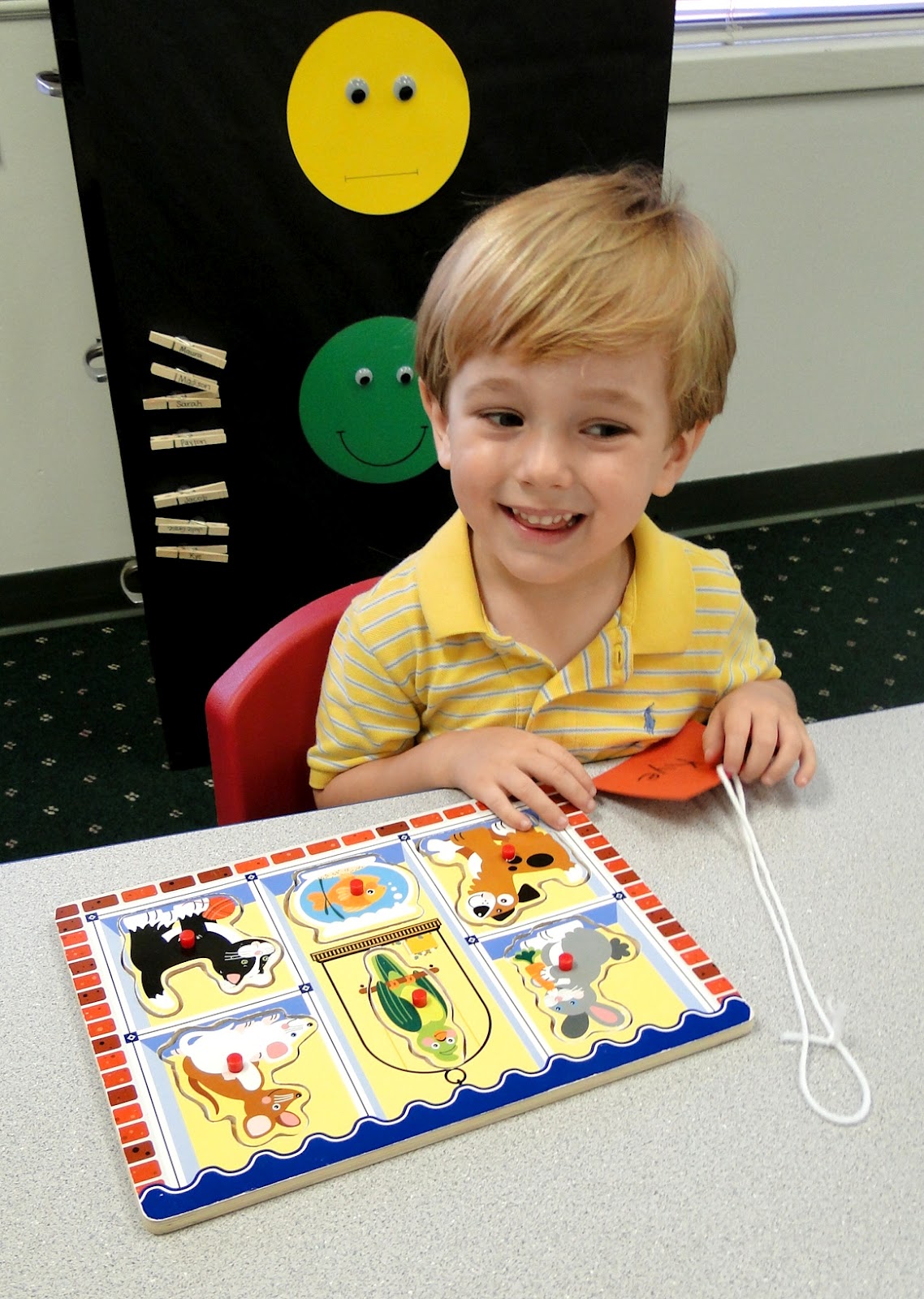 So far school has been going wonderfully! It sounds like Kye has pretty much stuck by Kailyn and Payton all the time as those are the only two classmates I ever hear about (other than the ones who “make bad choices” I know all about that haha). He also gets to play outside with the kids in the other class and I love that he still gets to hang out with friends he made last year!

The big change from last year to this year is that in the three year old class they go to the bathroom completely on their own. Pants down, go potty, wipe, pants up, wash hands. All by themselves! At first I felt like it was a lot to expect out of a three year old then I realized that maybe school isn’t asking too much…maybe I need to let Kye do more. I’m all for raising an independent child and I think sometimes as a mama I tend to forget that Kye CAN and SHOULD do many things on his own. I need to raise the bar a little bit in some areas 🙂 I’m thankful for school for helping me learn that lesson!

I’m really excited for Kye for this school year! I didn’t shed a single tear when I dropped him off on the first day. I’m saving all of those for when he does the 5 day class next year. Trust me. I will be BAWLING!!!