I’ve been looking forward to Ashley’s baby shower since she announced her pregnancy! Crissy offered to help me throw it so I was also looking forward to fun girl time together with her. Unfortunately the day before the shower was my first dr. visit for Blizten and the day I took Zyrtec to “help” my allergies. HUGE mistake. Allergy meds stay in your system for 24 hours so from the time I took it Friday night (at 6 pm) until it was out of my system (sometime Sat afternoon) I was a loopy mess. I really, really don’t respond well to majority of medications. I don’t know if it’s because I’m pretty petite? Or because I don’t take medications often? Whatever the reason they mess me UP. I seriously have next to ZERO memory of the night before the shower when Crissy and I did all the stuff to get ready for it and I barely even remember the shower itself 🙁 Kinda stinky huh? I think it all turned out good though???

When we started planning, Crissy and I wanted to do a theme but not an obvious one so we picked a simple color theme of red, yellow and white. Boyish but not the same typical blue of most boy baby showers. 🙂

Part of my gift to Ashley was the diaper cake – didn’t it turn out cute??? 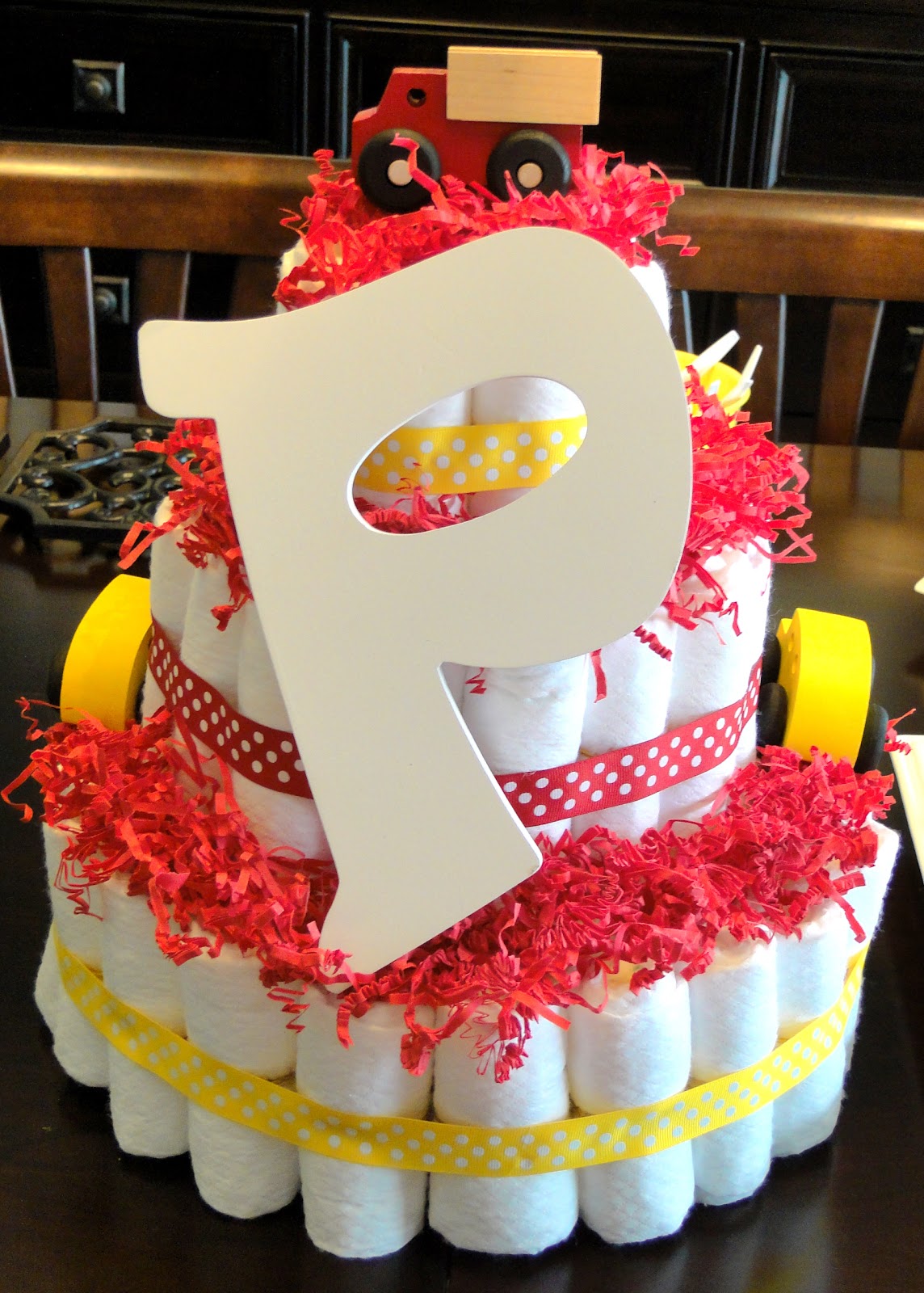 I am in LOVE with tissue paper pom-poms! 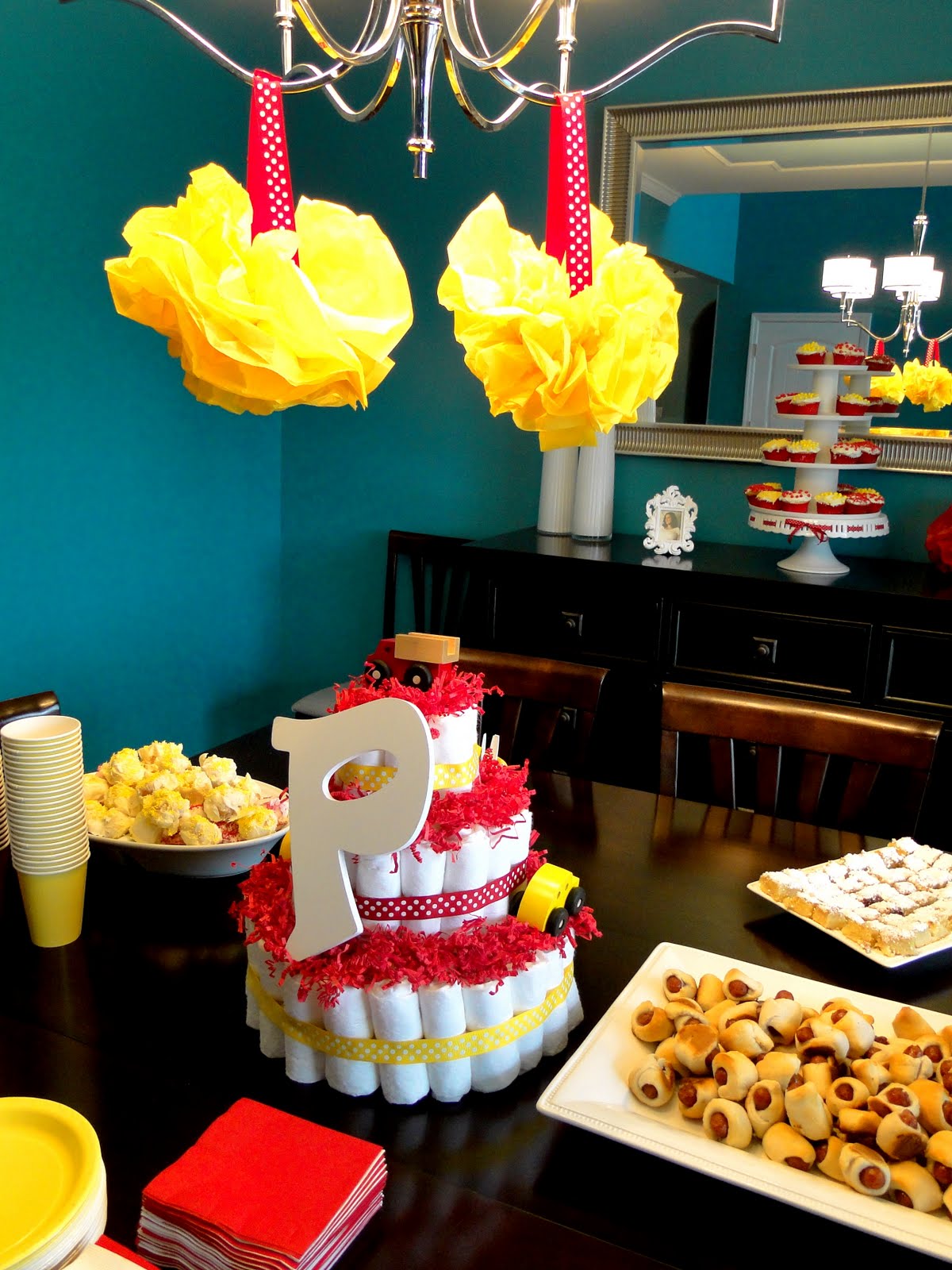 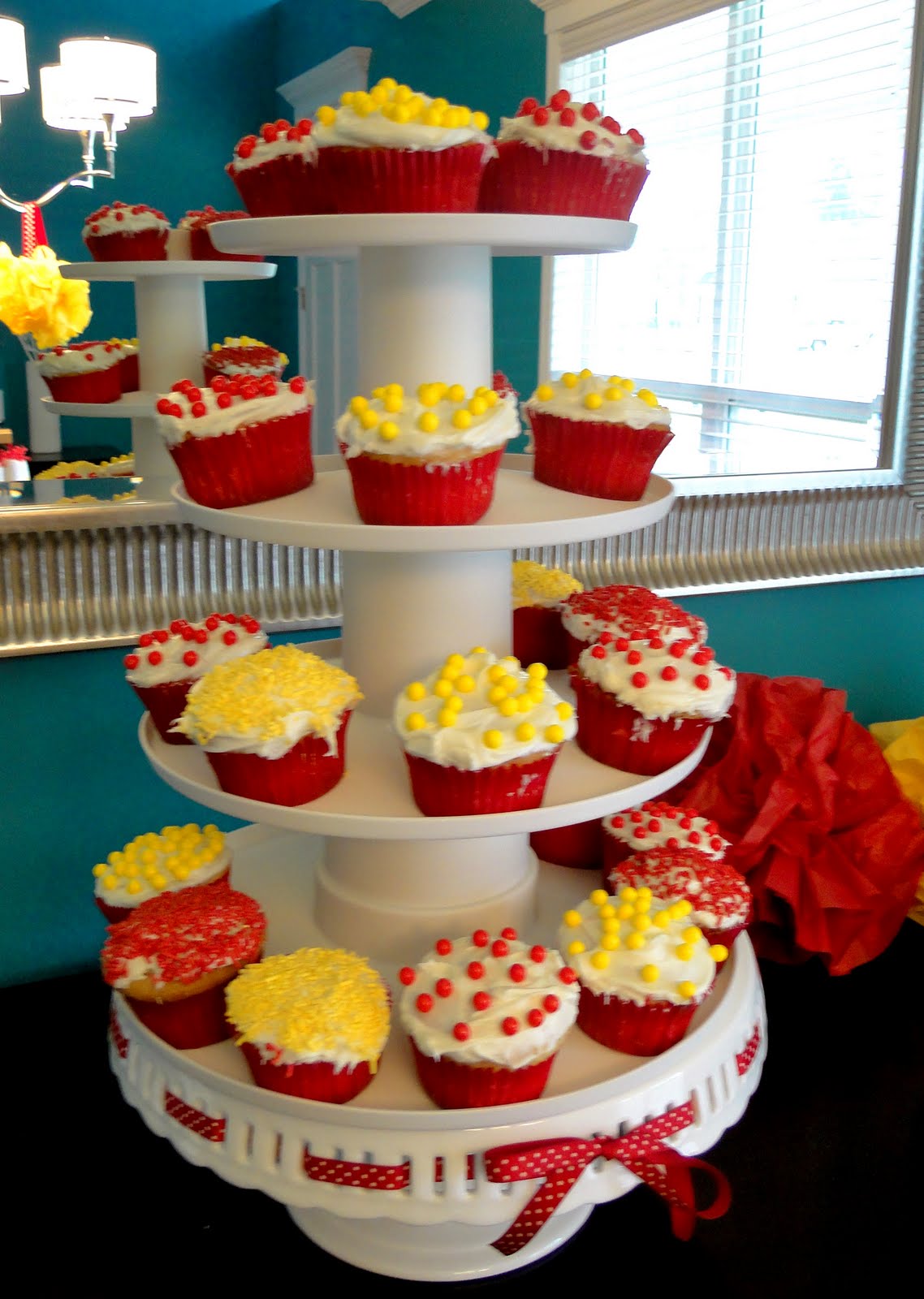 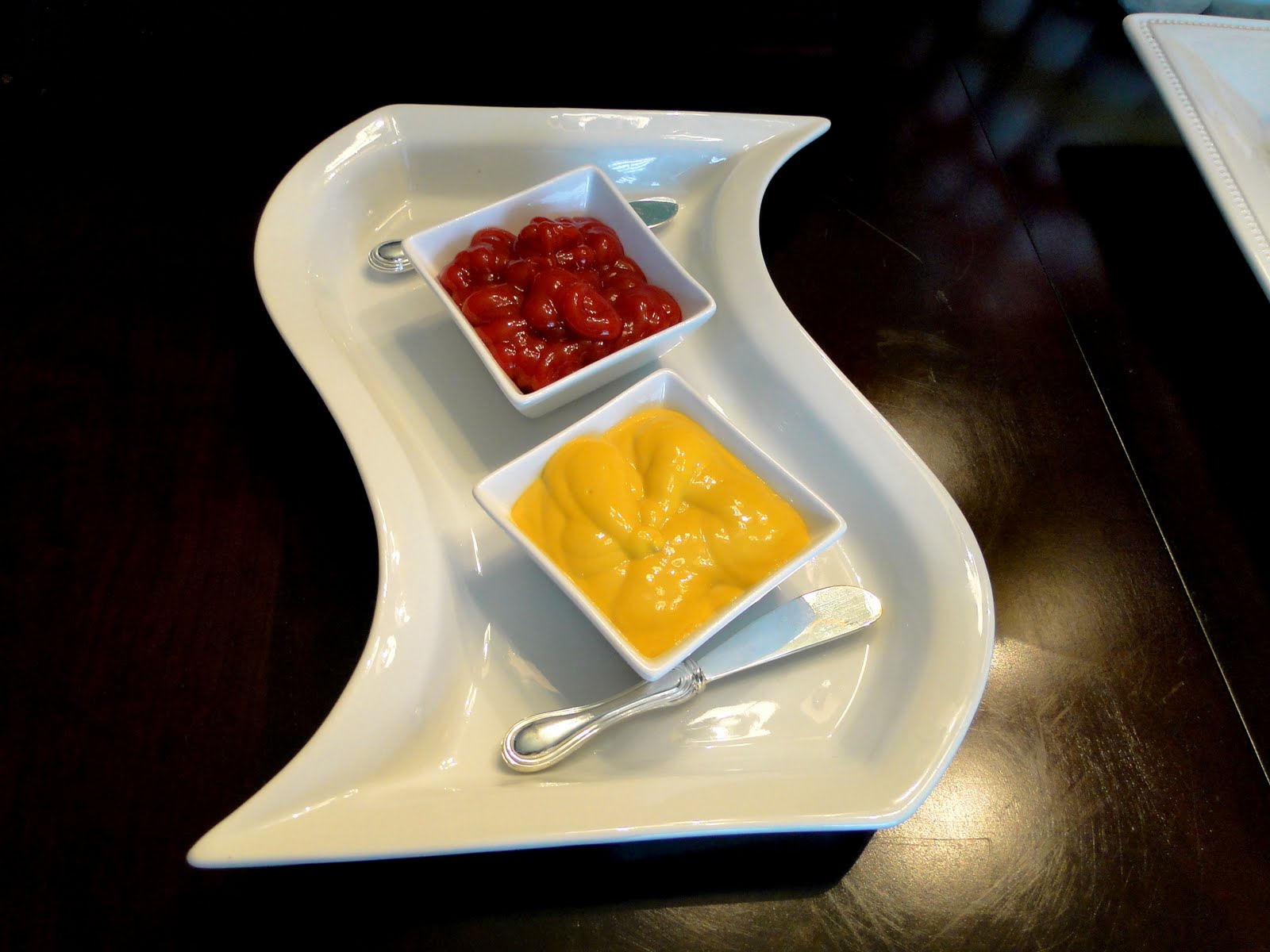 (Ashley is a MEGA healthy mommy and we wanted to hook her up with healthy treats too!) 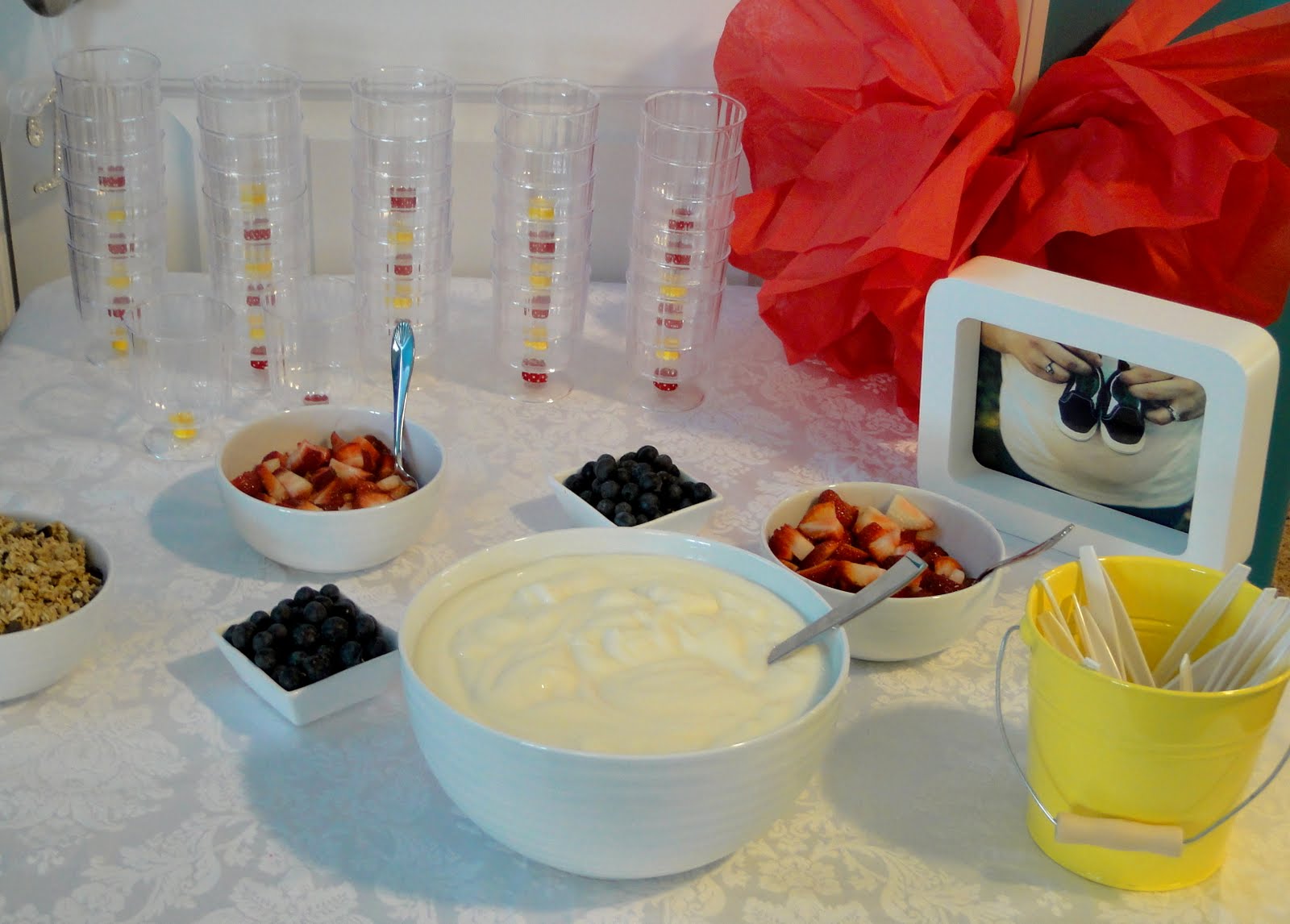 We used some of her maternity pics as decorations 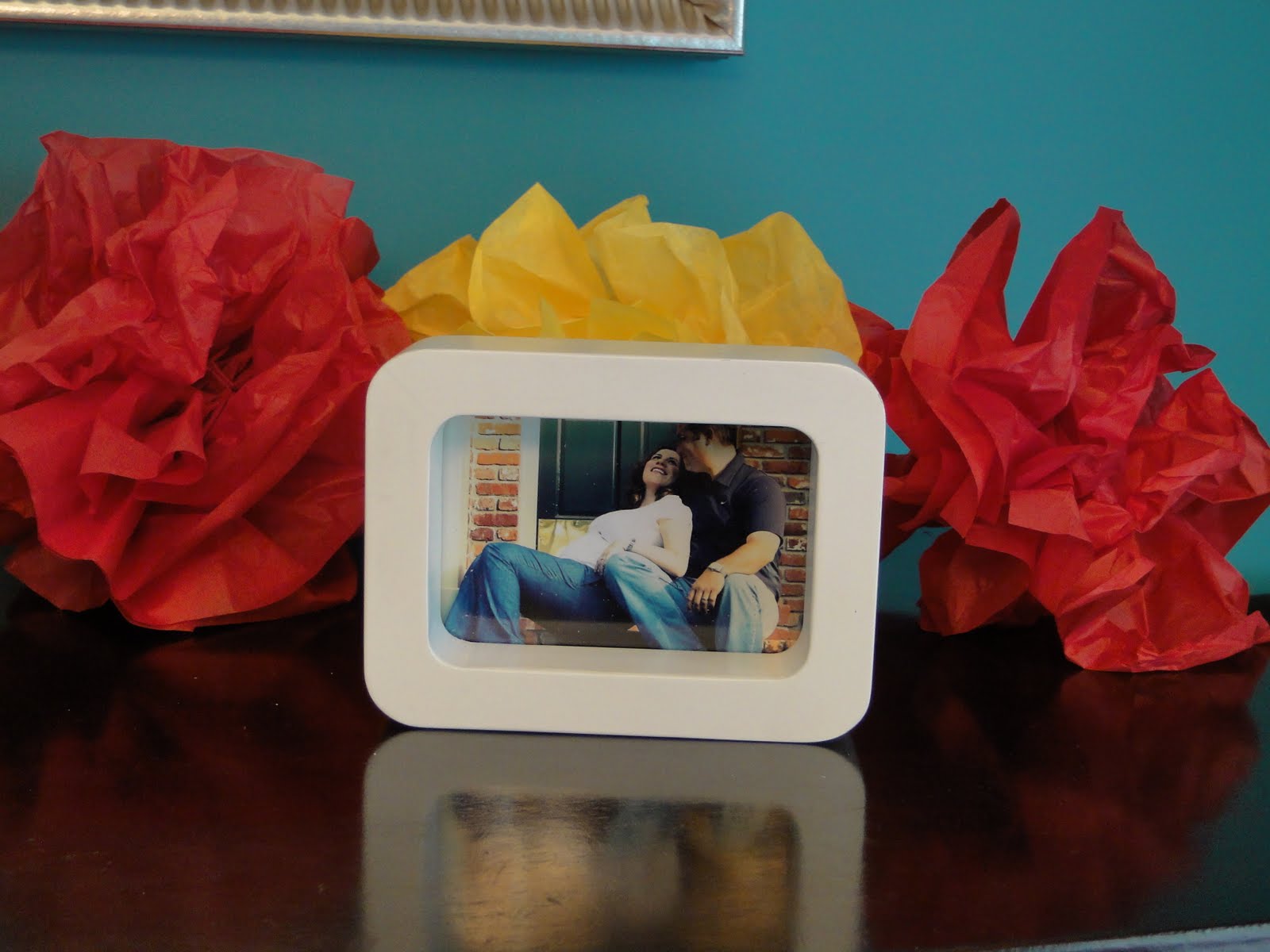 The rest of my gift to Ashley were these cute tie onesies (matching the theme, of course!) made by Lorelai’s Closet! 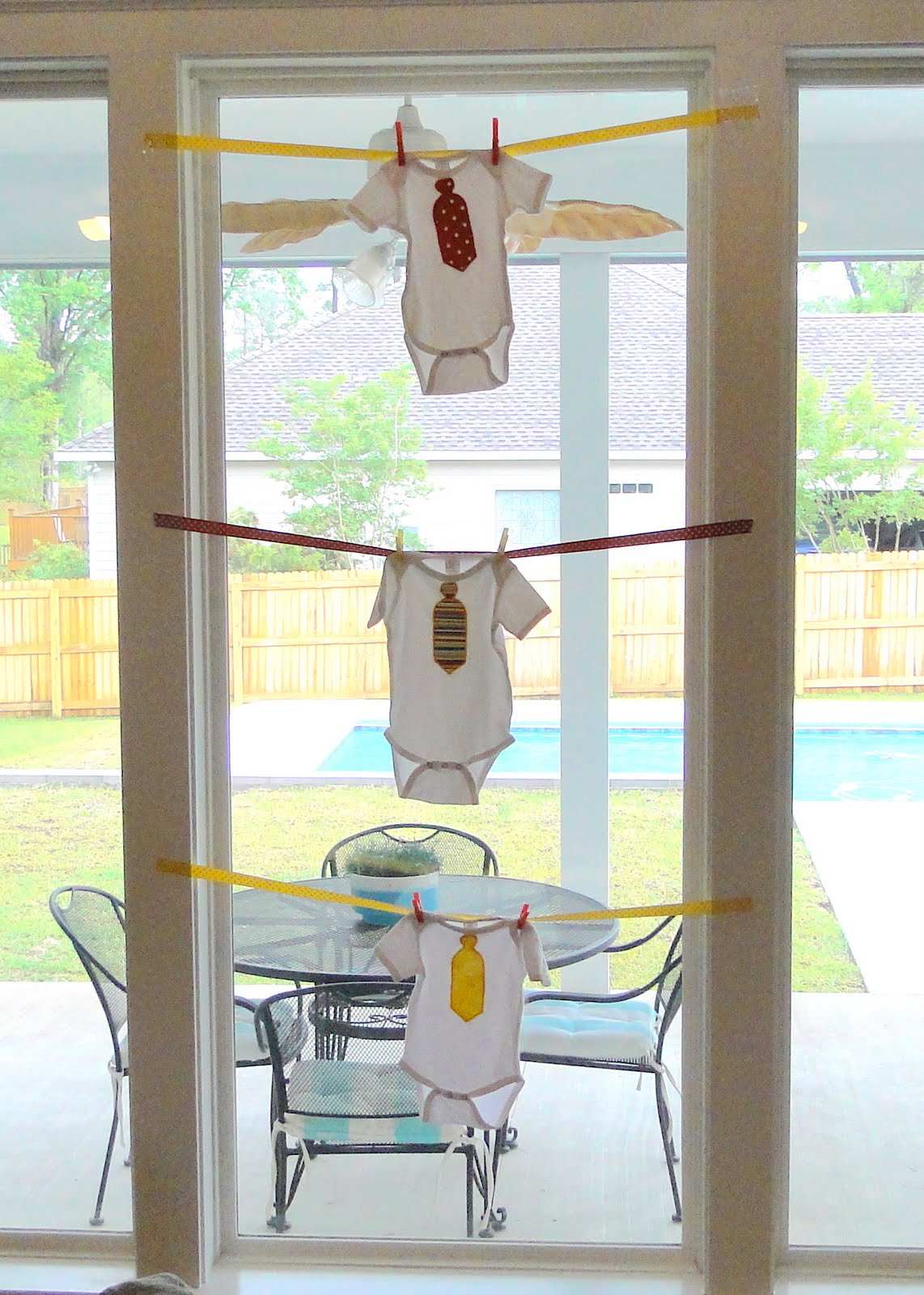 Even pulled out the red chair for Preston’s mommy! 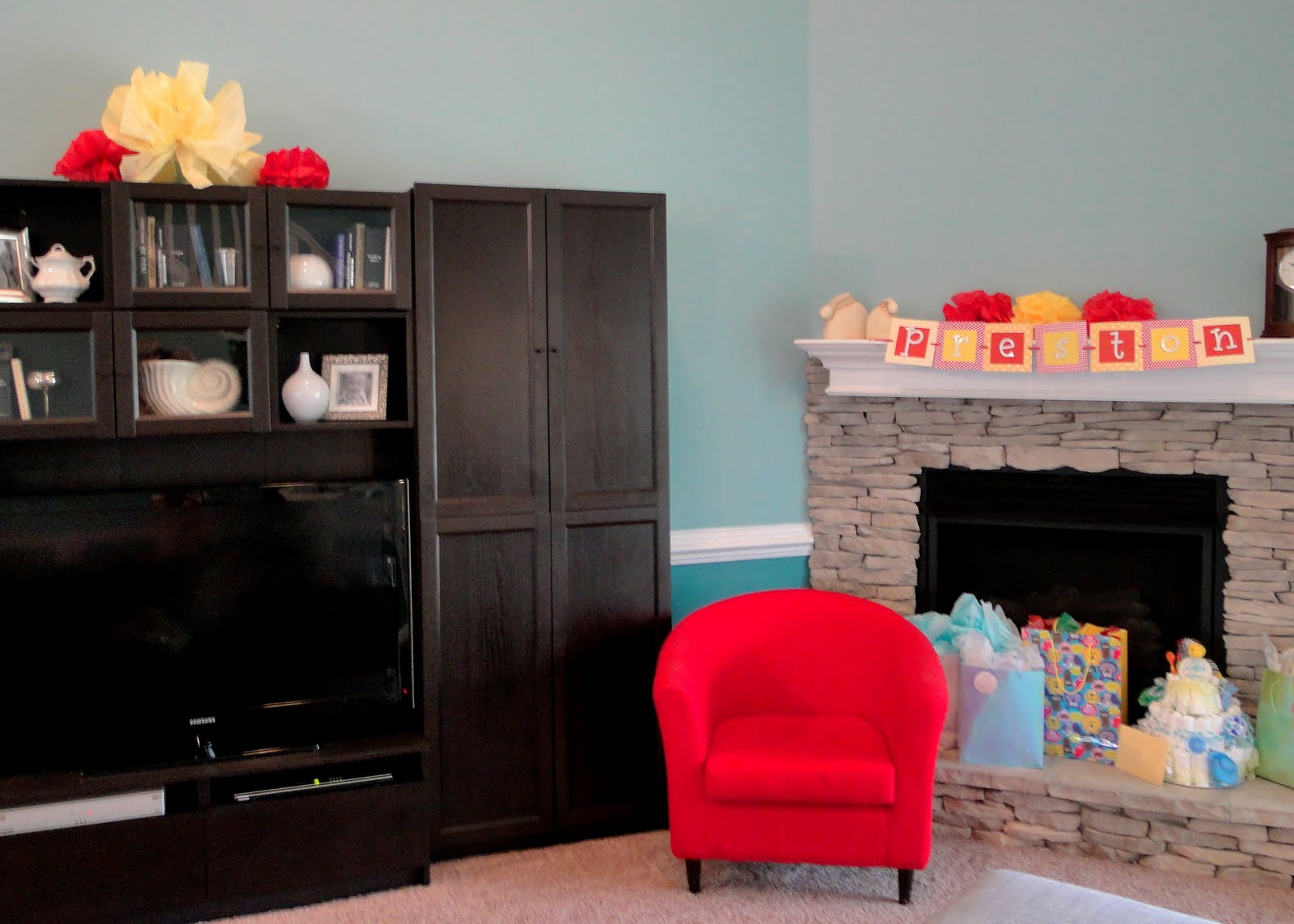 (SO glad I did all my crafts during the week before the Zyrtec!) 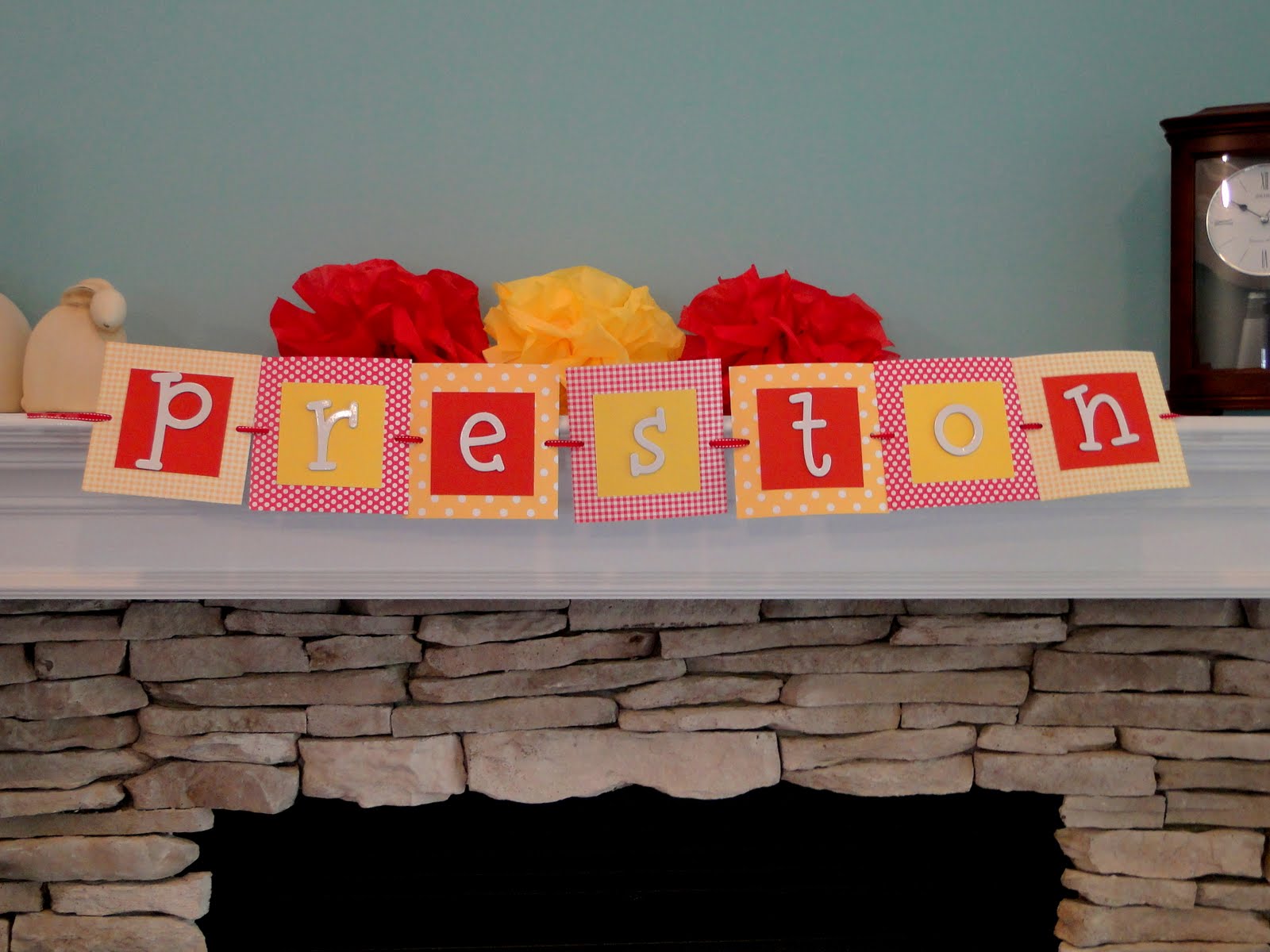 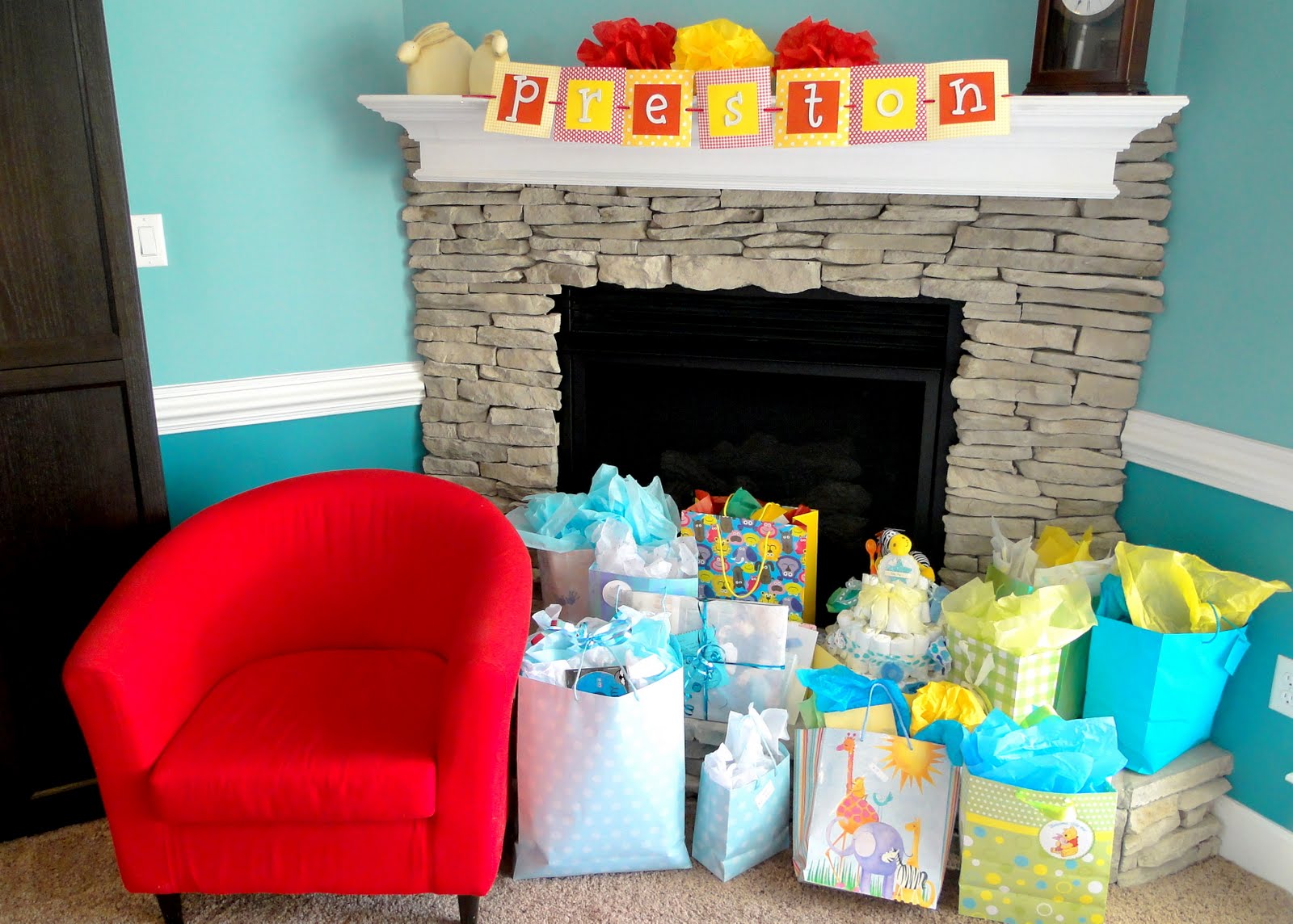 Mom, Mrs. Charlotte and Casey all came early to help Crissy and I with the finishing touches…so glad they were there! 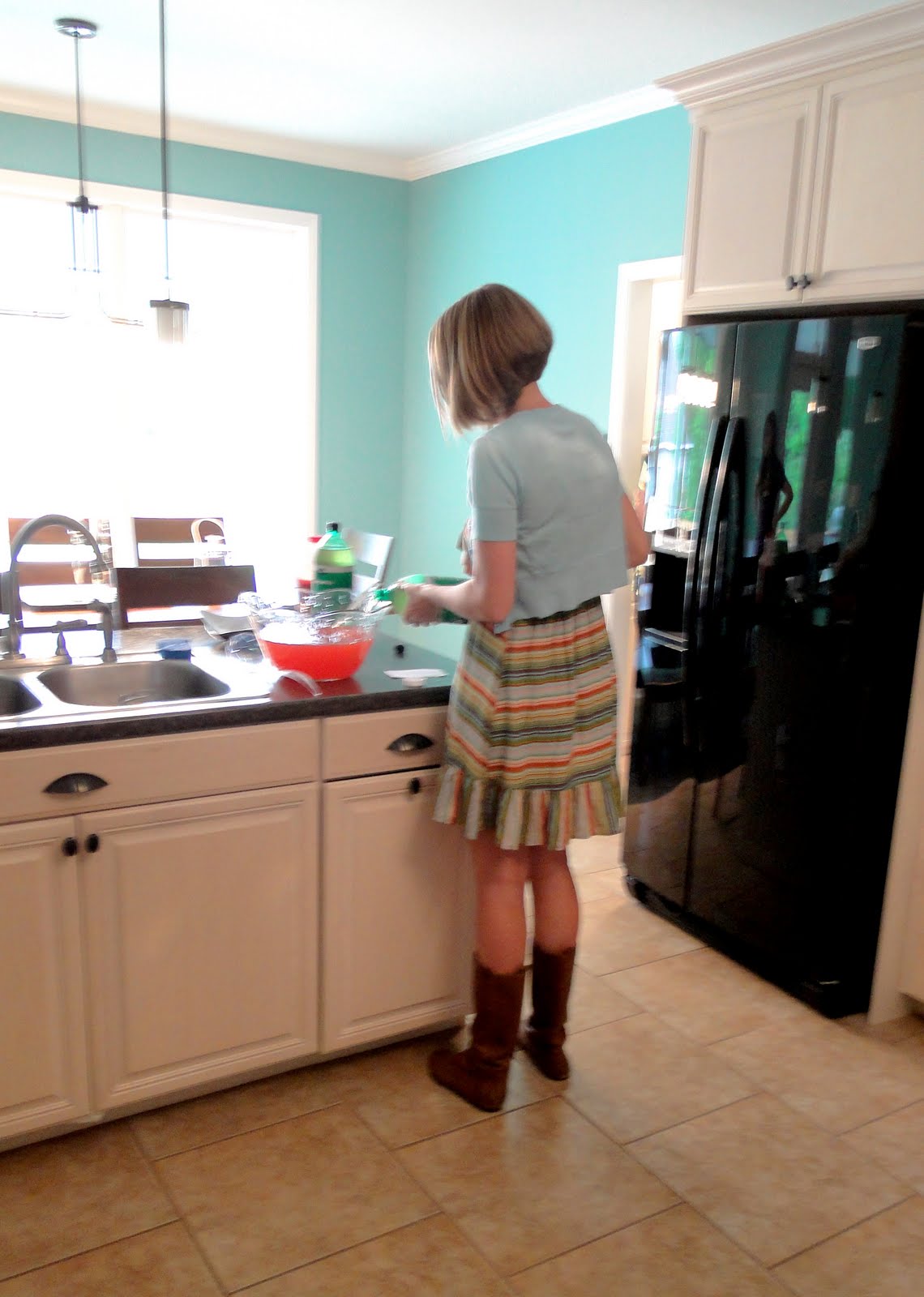 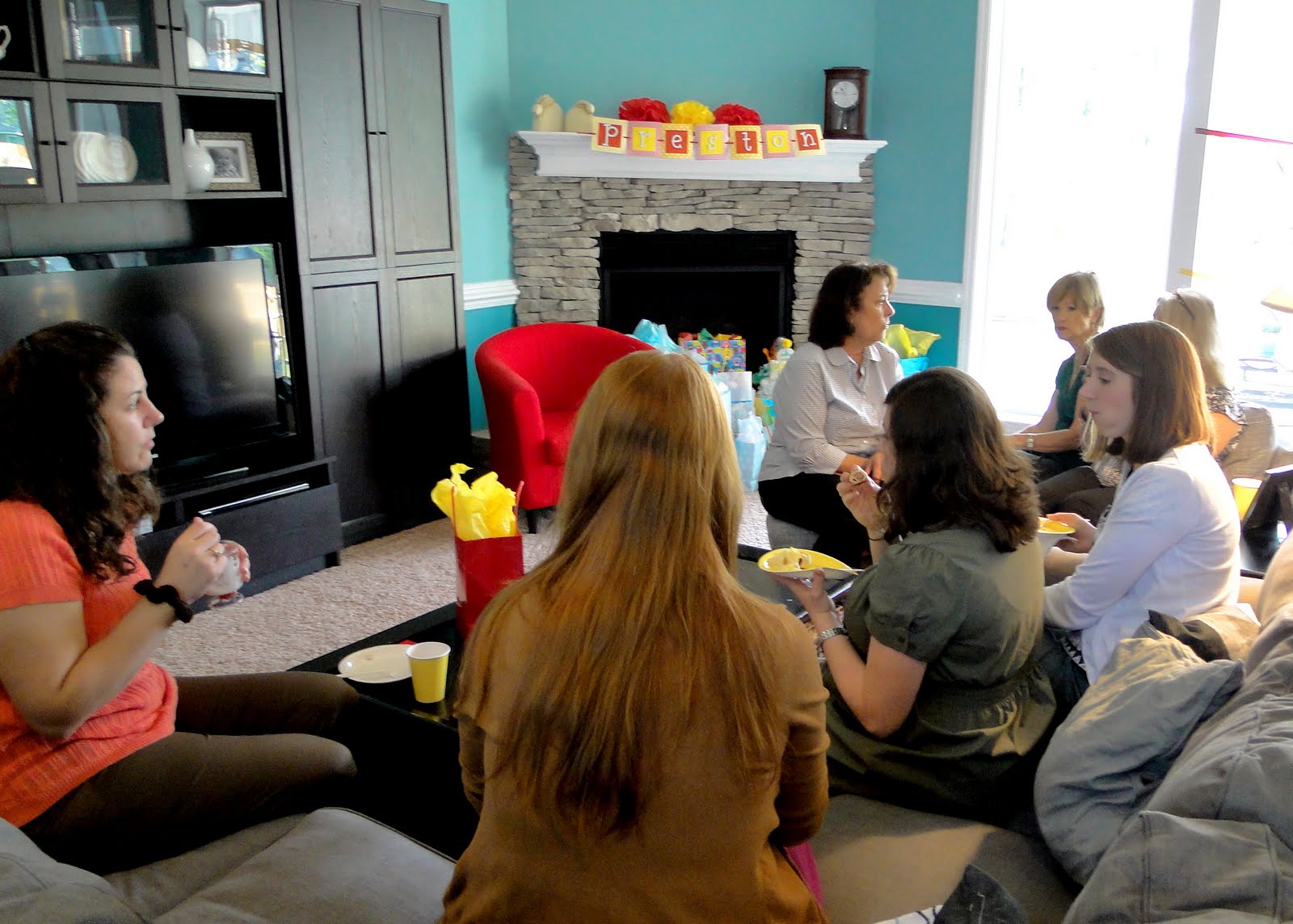 Ashley’s mother-in-law (on the left) arrived late and told us probably one of the funniest stories EVER! She drove into our neighborhood but turned down the wrong street and went into a house with balloons on the mailbox. She went in and sat down and asked where Ashley was and was told that Ashley was late to her own baby shower! She gave them her gift and was visiting with people when someone said “There’s Ashley now!” and Ms. Nan realized it was the wrong Ashley!!! Turns out some people right down the street from us were also having a baby shower at the exact same time as ours for a girl named Ashley! Isn’t that crazy!?!? Glad she made it to the right shower! 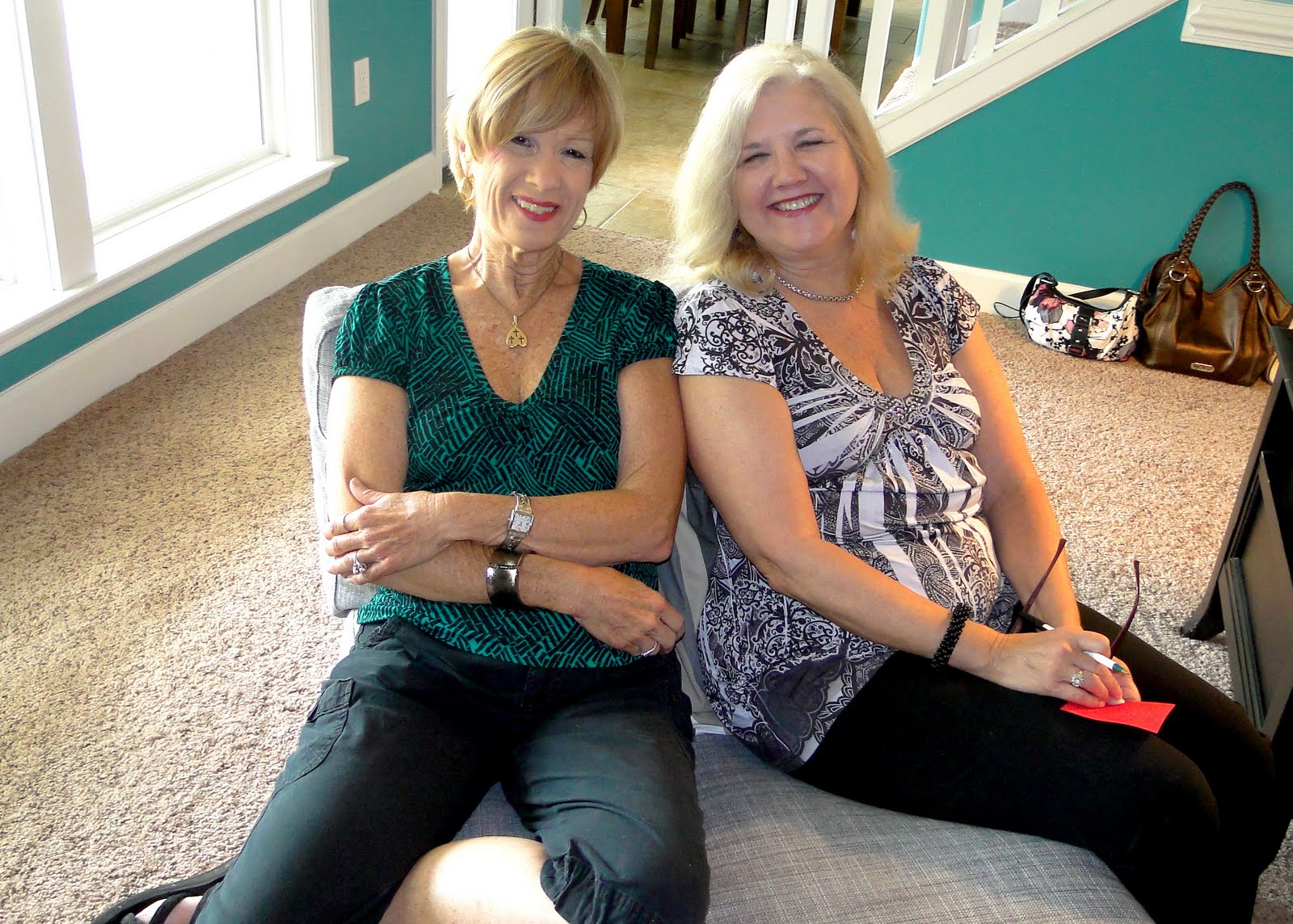 We played a few games…we froze plastic babies in ice cube trays and each person had one piece of ice in their punch. Whoever had their “water break” first (baby floated to the top of their cup) won a prize! Crissy also put together a game where she played a cd of songs, each one having the word “baby” in the title and everyone had to write down the name of the song and the artist who sang it. My favorite shower game (for both baby and wedding showers) is Gift Bingo. I made up boards for everyone and numbered all the presents as they were brought in. When Ashley went to open one we’d shout out the number and whoever got bingo first won! It helps make gift opening more exciting for everyone watching and they tend to pay better attention too 😉 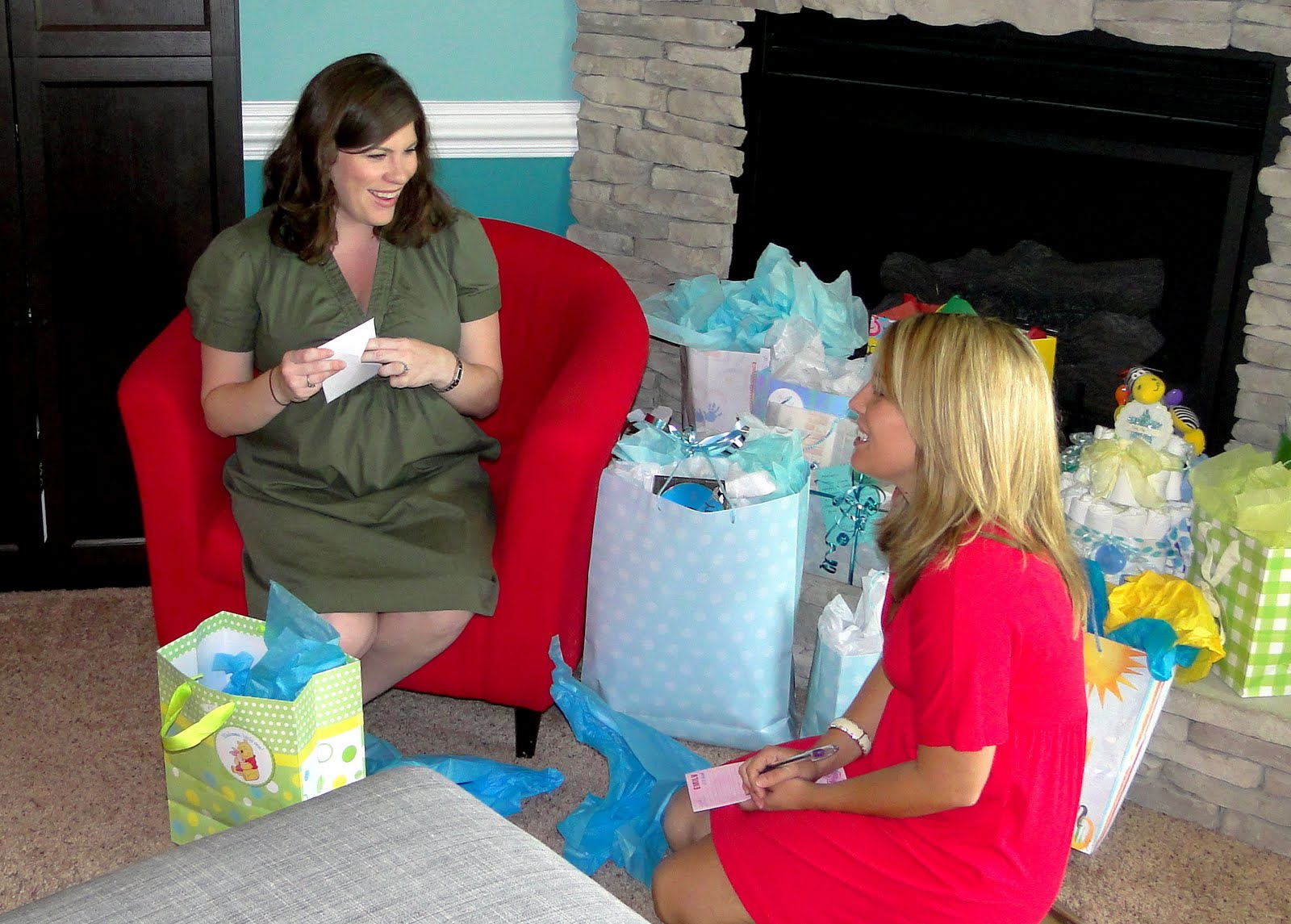 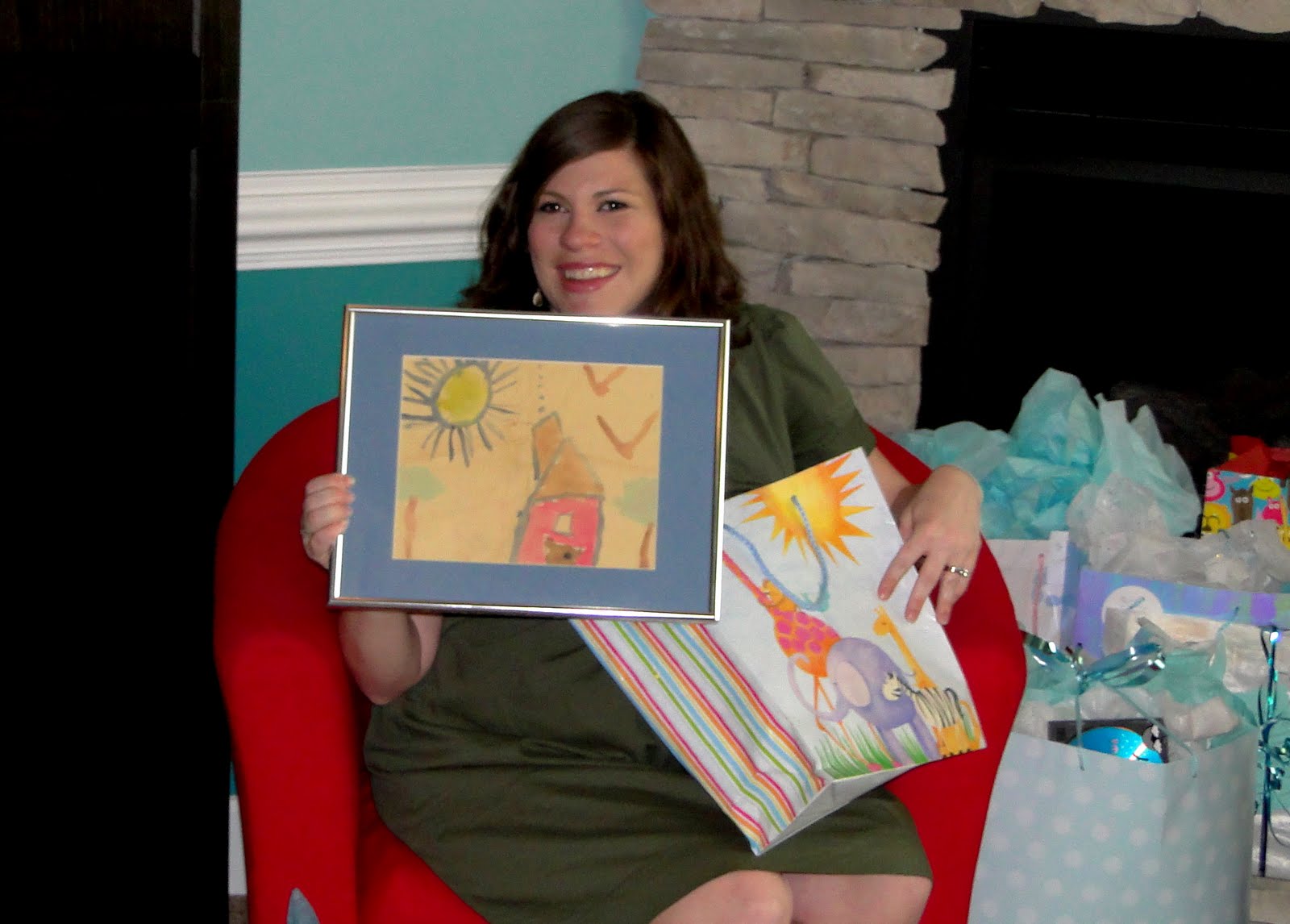 AWESOME bedding made by Brandi 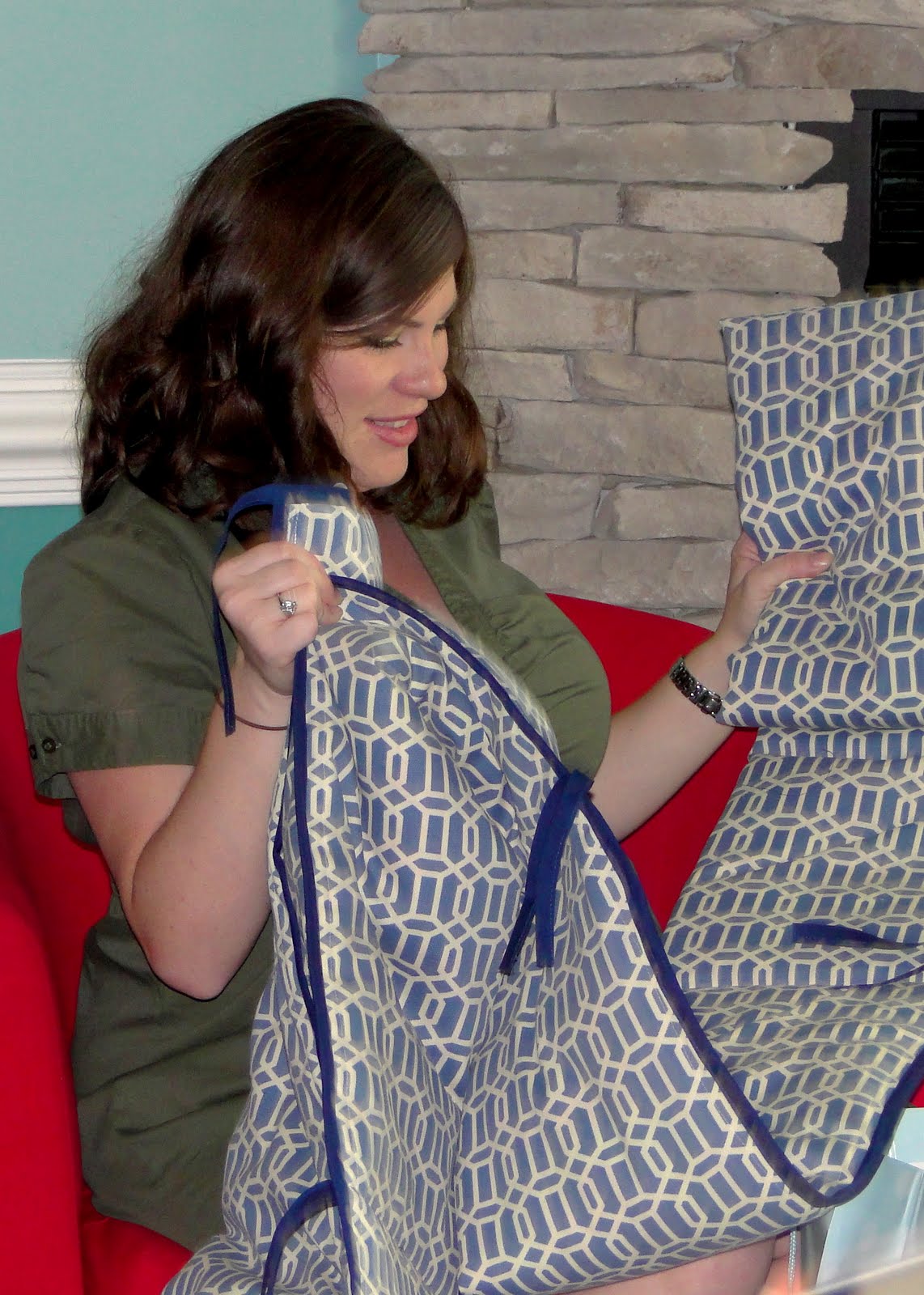 showing off another diaper cake 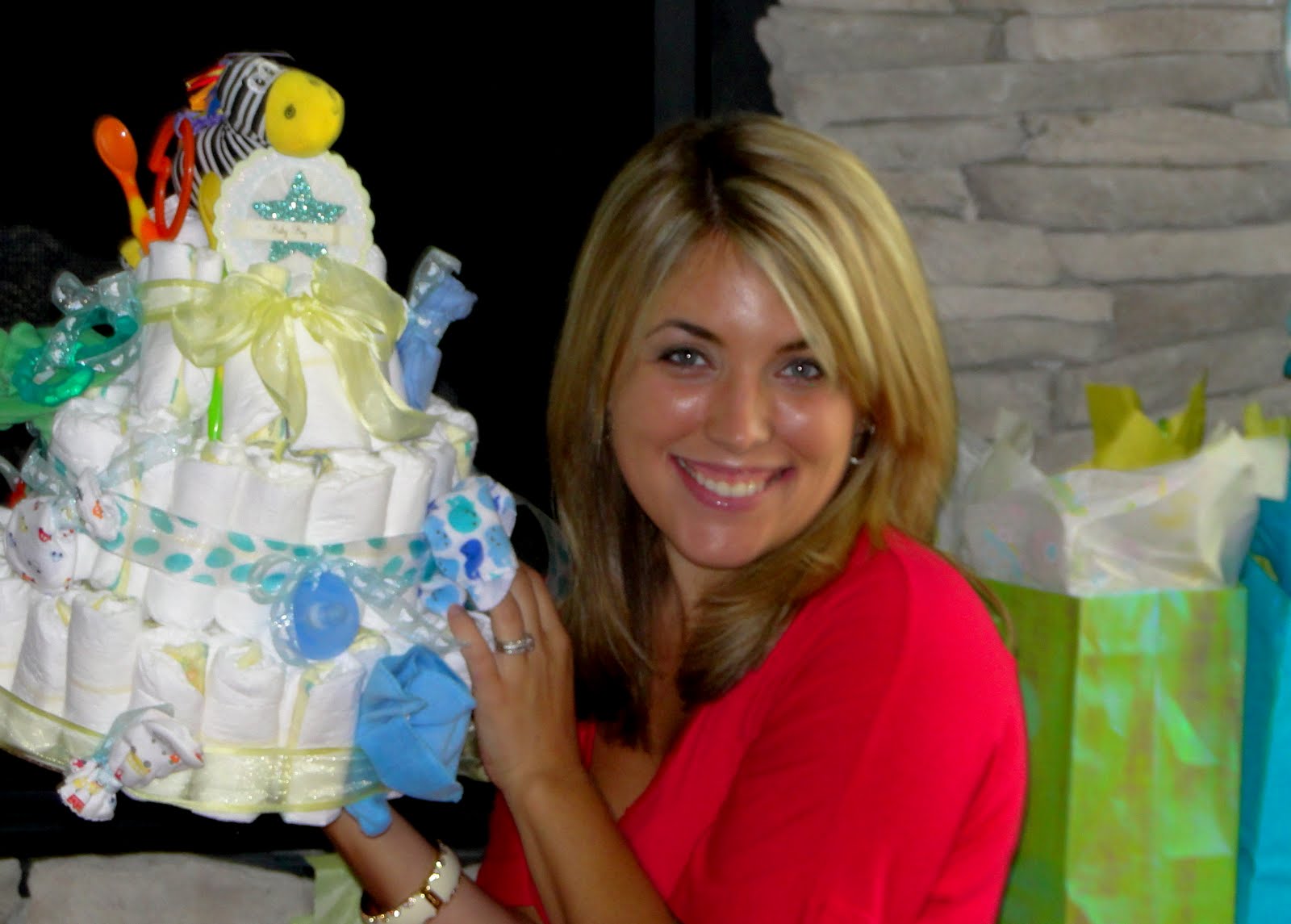 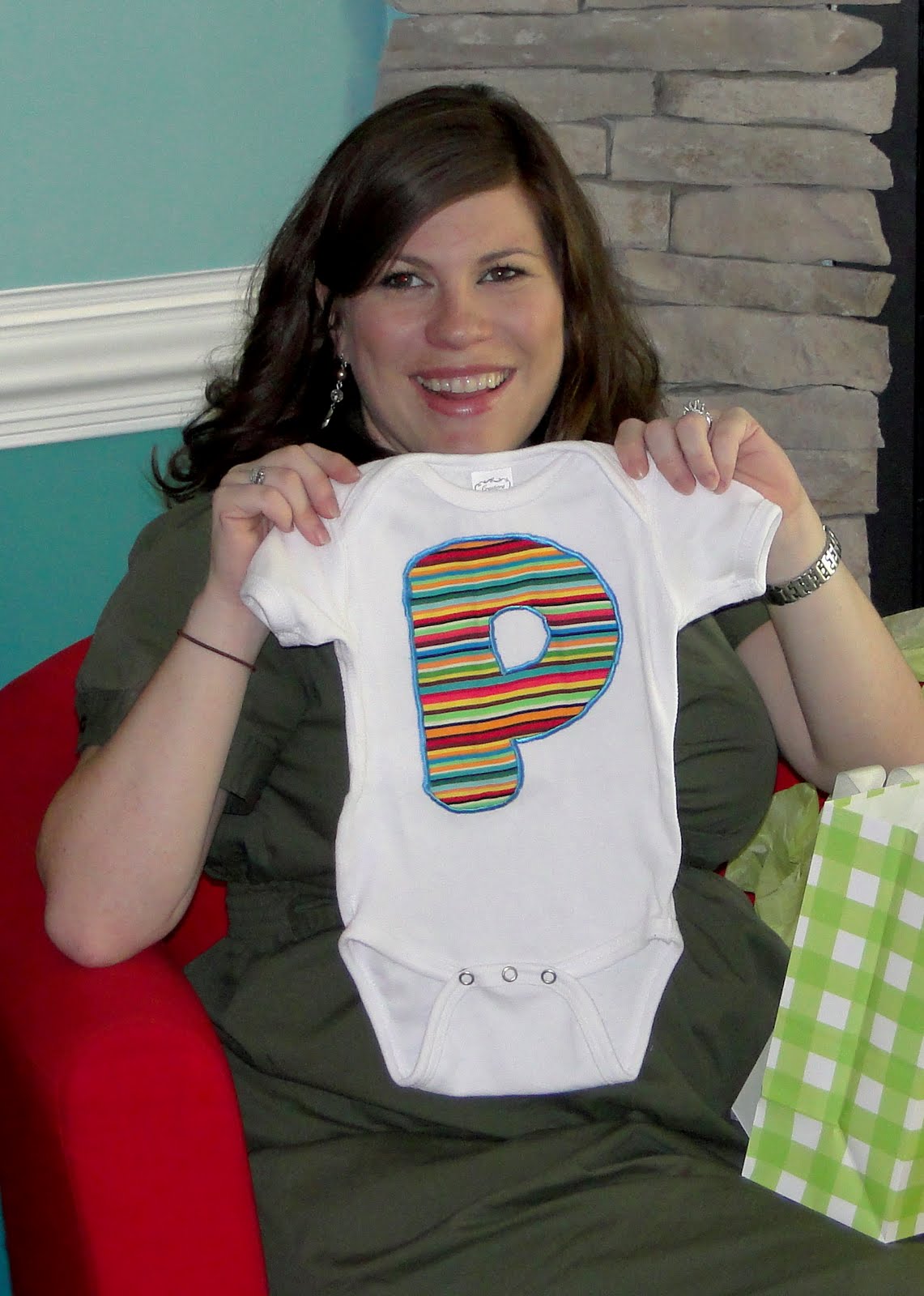 After all the present opening Crissy read off “things that we said the night Preston was conceived.” She used words Ashley said when opening the gifts and it was pretty funny. We played that game at Danielle’s lingerie shower (except it was “things that Danielle will say on her wedding night with Jonathan”) and it was SO funny when one of the things said was “thanks Zach!” haha. Sadly I was too out of it to remember any of the funny things said at Ashley’s, but I do remember laughing 🙂

pregnant at the same time…at least for another couple weeks! 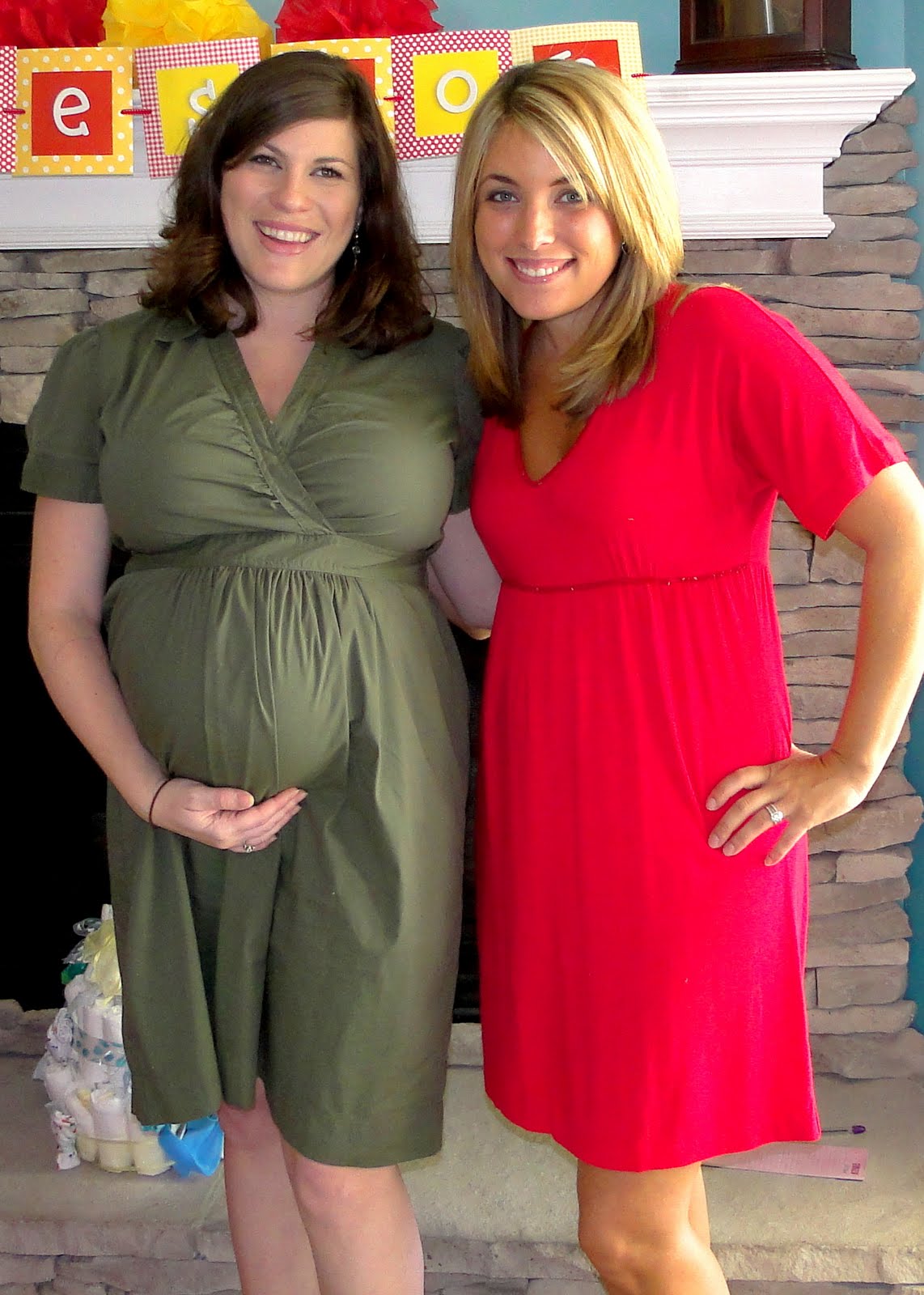 Crissy, Ashley, and I 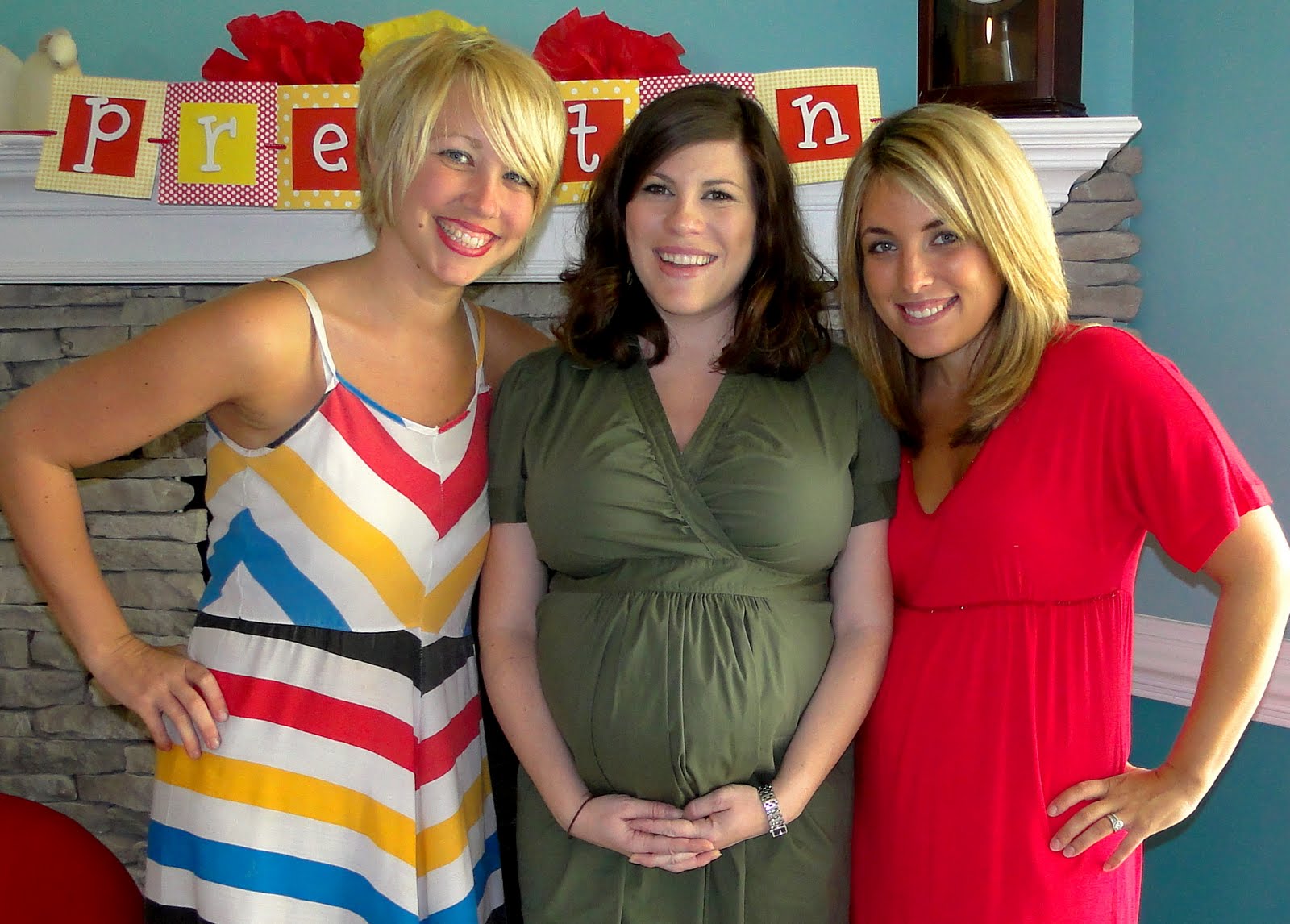 So thankful Crissy co-hosted with me…the shower would have failed without her! 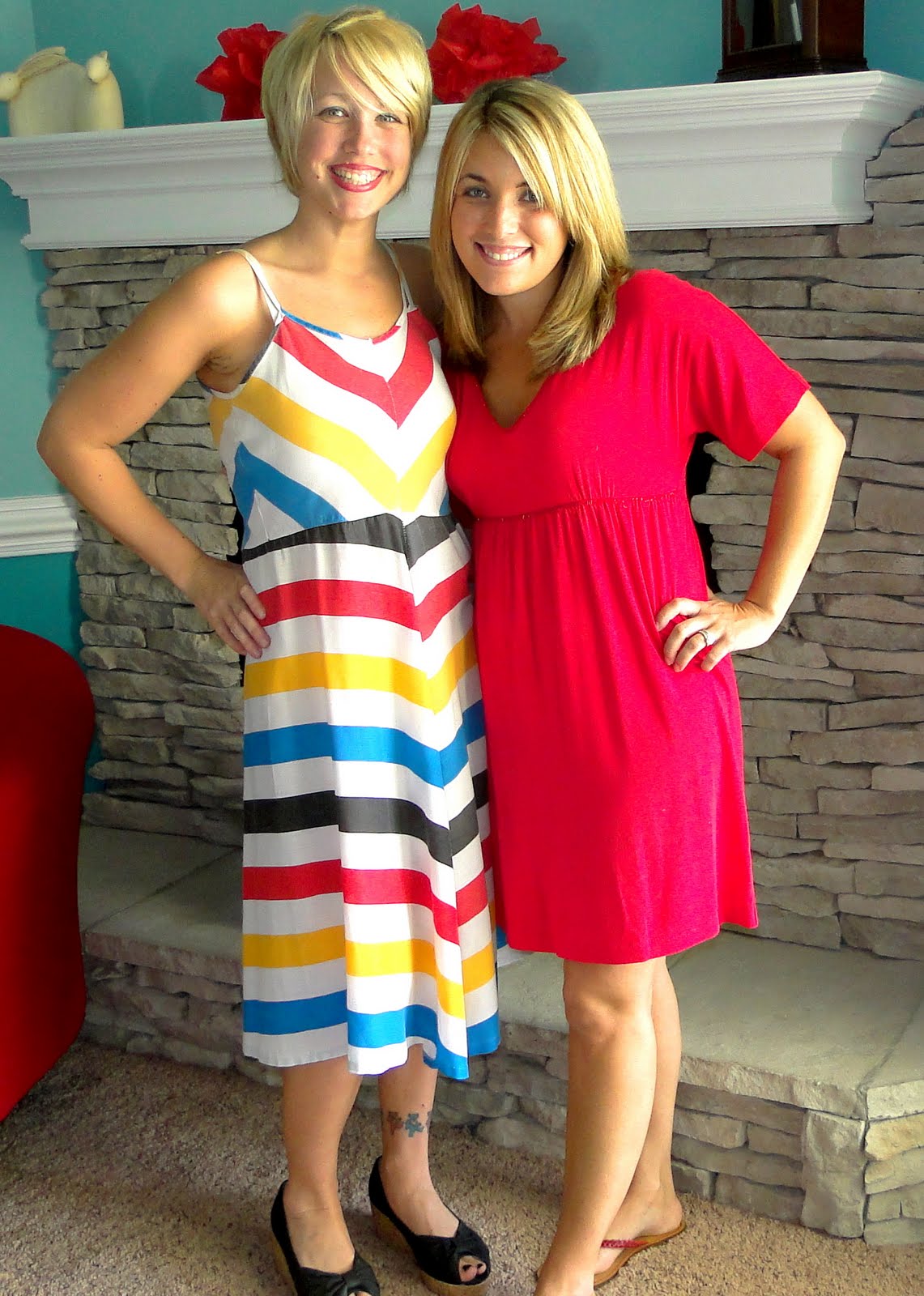 I HATE that I was so out of it but I think everyone had a good time and that Ashley enjoyed herself! I cannot wait to meet Preston very, VERY soon!