When we decided to be surprised at the sex of our baby one of the few things I was disappointed about was that I wouldn’t be able to buy cute little baby clothes. I knew I didn’t want a bunch of neutral stuff so I was stuck without buying ANYTHING until little Clover came into the world! Well he came and he’s a HE so I was pumped to be able to let the shopping begin!

My first disappointment? Um there. are. no. boy. clothes. anywhere. Girl stuff? EVERYWHERE. And it’s super cute. Boys stuff? Not so much. The baby department in a store is typically filled with 3/4 girls clothes and 1/4 boys. I’m not kidding! With the selection being slim it gets even tougher seeing as I’m picky and so is Zach.

We don’t want our son looking like a little pilgrim. And if you live in the south like we do then you know what I’m talking about. Little boys running around with pansy little outfits on that you KNOW they’ll be sooo embarrassed of later in life. Also we don’t like stuff with sayings. The worst is when you see a baby wearing a shirt that says something like “100% adorable” and the kid is SUPER ugly! I think Kye is cute but duh I’m his mom! Other people may not agree with me and I know this 🙂

When Kye was first born the grandmas (my mom and Zach’s mom) went shopping and got him a TON of clothes. We made a list of stuff we liked and didn’t like and let them go to town! They got him some adorable stuff and it was PLENTY to last him until recently. I seriously only bought him a couple things when I saw them on sale!When he turned 6 months old his 6 month old sized clothes started getting too small and since we hadn’t gotten much gifts any bigger than that it was time for me to go shopping.

On Labor Day I drove down to Lake Park and planned on using my coupon for Carter’s and hitting up the Oshkosh store because they were going out of business. I figured I’d just go to those two places and stock up on 9 month sized clothes. I went into Oshkosh and they were picked over. Went into Carter’s and felt SO discouraged. First: they have out WINTER clothes. Um it’s early September and we live barely north of the Florida border…we don’t need winter until like Jan! Second: I hated it all.

Yes, I KNOW I’m picky but I just can’t bring myself to spend money on clothes I don’t like. I don’t like cord pants (they aren’t in for adults at all so why make them for children?), I don’t like overalls, I like any sayings, I don’t like most cheesy animals (monkeys are okay, the rest not really), I don’t even really like jeans. Basically we like Kye to dress how I would want a teenager to dress. He typically wears plaid shorts and a polo type shirt. Could I find ANYTHING like this? Nope!

Everything had something on it from sports (I don’t mind ~some~ football or golf stuff but those are the only sports and we don’t want too much b/c we’re not trying to brainwash the kid) to sayings to dumb dogs to guitars (which if I HAD to get something with a design on it I’d prob pick guitars). And all the shirts were this AWFUL looking long sleeved attached to a short sleeved shirt on top look. Um not cool. I felt SO SO frustrated and it was NOT fun 🙁

Another issue with baby clothes that I don’t like it how the sizing works. I’ve FINALLY after 6 months of having a baby kinda figured out a system. He’s always a size ahead of his age in Carters and Oshkosh (so right now he’s in 9 months clothes) as well as Ralph Lauren. He’s true-to-size for now in Old Navy and Gap because their size is 6-12 months. They are all pretty big on him now but I can’t IMAGINE them still fitting when he’s 12 months old. He is also pretty true to size with The Children’s Place as he wears a 6-9 months size there. It’s super annoying and all the clothes companies should have an agreement on this and make all their baby clothes the SAME sizes!

I ended up buying some sleepers because he needed them and some plain pants. Then I went to Gap and Polo and found some cute things there for pretty good prices. I had to come to the realization that in order for our child to dress the way we like we’re going to have to either a) shop all the time for deals or b) give in and spend some mega dough. I don’t have time to shop very often but I’m hoping the internet will be my friend 🙂

Lucky for me I’m very ebay savvy and seem to find some good baby deals on there. Also The Children’s Place has an AWESOME sale going on, stuff for only $2.99! I hate it but Kye is just gonna have to dress “out of” season. I’m not putting him in long sleeved stuff yet so he’ll be looking summery (bright colors etc) until cold weather comes. Deal with it!!!

I also refuse to spend a lot of money on his clothes. I have a rule for myself where I rarely spend over $10 for something and very rarely spend over $15. Why should I up the amounts for my child when he won’t wear stuff for more than like 3 months of his entire life? I don’t mind him having used clothing, as long as you can’t tell and to me it’s the smartest way to go! I just always look at auctions and bid super low and hope that no one else bids, yeah I lose a lot of them especially the expensive stuff like Ralph Lauren (I call it that now instead of Polo b/c you have to enter the real brand name in the search haha) but sometimes I luck out! I’ve gotten a SUPER cute Tommy shirt for $1.99 and an adorable Gap jacket for $3.99! I want to start garage sailing more too as I’ve heard you can find great stuff that way! 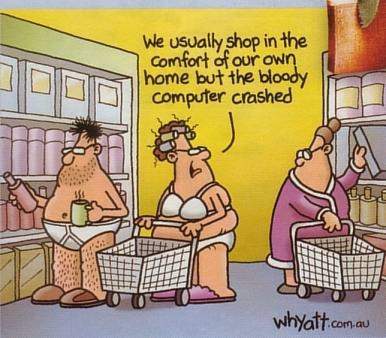 I guess it’s good that I had a boy first because I don’t think mother’s of little girls have it as tough as I do. It’s good because I don’t spend as much since there aren’t as many cute things out there and it’s good because when I do have a baby girl I’ll appreciate the cute clothes SO much more!!! And if I’d had a girl first I’d hate the boy clothes even more haha. And, on the bright side, it won’t be this tough again with any other babies. Either I’ll have a girl and love it all or I’ll have a boy and already have ALL of Kye’s clothes for him! Until then it’s the sales rack and a lot of internet for me 🙂