Every year Zach’s state territory for Aflac hosts two trips for agents to qualify for: one is a driving trip and one is a flying one. This year’s driving trip was to Amelia Island. Neither Zach or I had ever been to Amelia Island before (we actually thought it was in Georgia haha!) and we were looking forward to some quality time together laying out by the beach! The dates for the trip were a little strange (arriving on Sunday and checking out on Wednesday) so I was so proud of Zach when he said he didn’t want to take off that much work (if Zach doesn’t work, he doesn’t get paid…commission only!) and we planned to head back Tuesday night in order for him to work on Wednesday.

Last Sunday we went to church then over to Zach’s parents for lunch and to leave Kye with them while we were gone. The kid was OUT in the car on the way! I didn’t even get to say bye to him before we left because we quietly put him down for his nap when we got there. 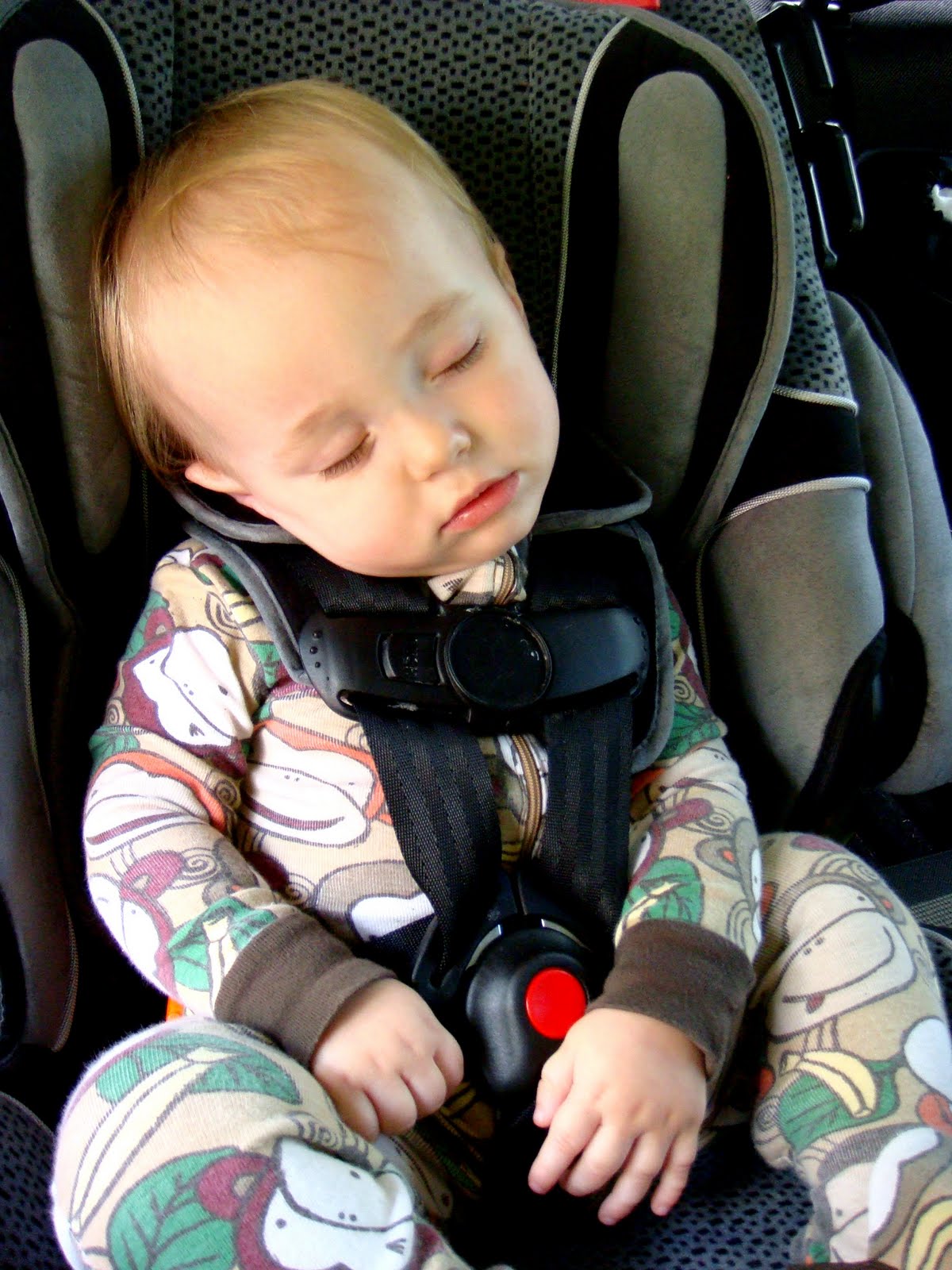 After lunch we were on our way! It was nice to be able to talk and play music in the car and not have to worry with potentially waking Kye up or having to crawl  in the back to keep him entertained. And it was nice that it was only a little over a 2 hour drive! They had us staying at The Amelia Island Plantation and it was HUGE. Sadly, we didn’t get to stay with most of the other Aflac people at the hotel and we were in some separated smaller hotel. With two “queen” beds. So much for being mega romantic! haha 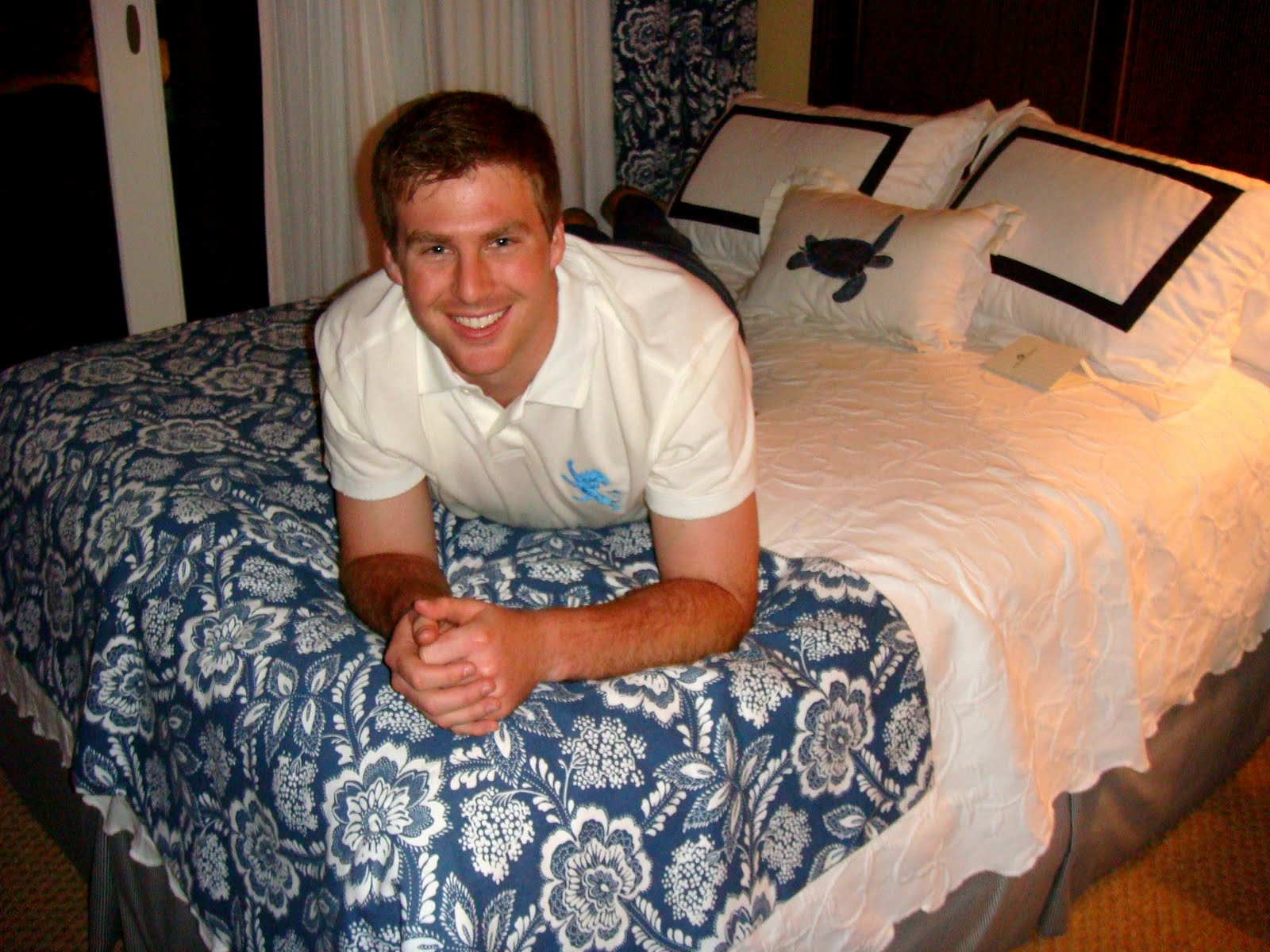 The first night the Aflac people supplied us with dinner and it was nice to mingle with everyone, especially two of our friends who are sisters and pregnant at the same time (due 2 weeks apart and BOTH having boys!!!). It was nice because they are Christians, don’t drink (even when they aren’t pregnant haha), and could talk babies! We were actually some of the last people to leave and we had a great time talking with them!

Kye had been sick with his first cold and had been prescribed antibiotic two days prior. Well the day before we left I started feeling crummy too and by the time we got back to the room after dinner I was DONE. I may have felt crummy but it was wonderful  to get to sleep in past 7:15 AND to not have to pump! This was our FIRST vacation since Kye has been born (so in over a year!) where I didn’t have to mess with pumping. It was sooo great!!! We slept in until 9:30 then Zach went to get us breakfast (they had a continental type thing at the hotel where everyone else was staying) and I realized that I was really really not feeling well. Boo.

When Zach got back with breakfast he mentioned that some of the guys had asked him to go golfing and he told them no. I told him he needed to go. I was sick and it was cold outside so even if I’d been well we couldn’t lay out like we had planned on doing (seriously all we packed were our suits!). He WON this trip for his hard work and he DESERVED to enjoy it!!! He had NO golf clothes or even clubs!!! I should have taken a picture of what he played in, it was pretty comical. He wore a dress shirt untucked, some casual shorts, and basketball shoes and he played with someone’s clubs he borrowed! They got hooked up though and got to play at The Ritz-Carlton for only $45! While Zach may not have been dressed for it, he balled out and shot a 76 (which I guess is really good in golf?!?)

What I did all day while Zach golfed: 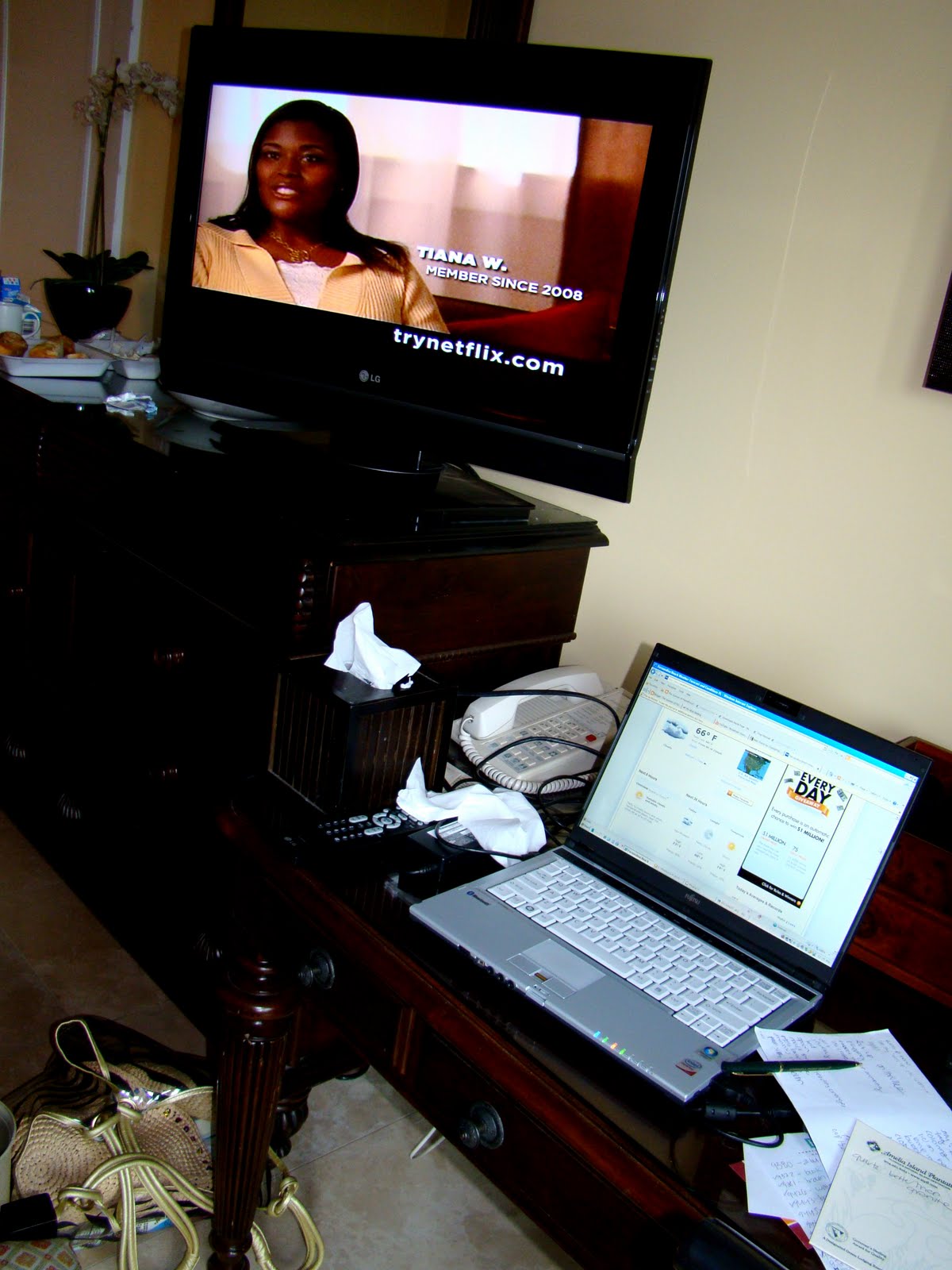 at least I had a view! 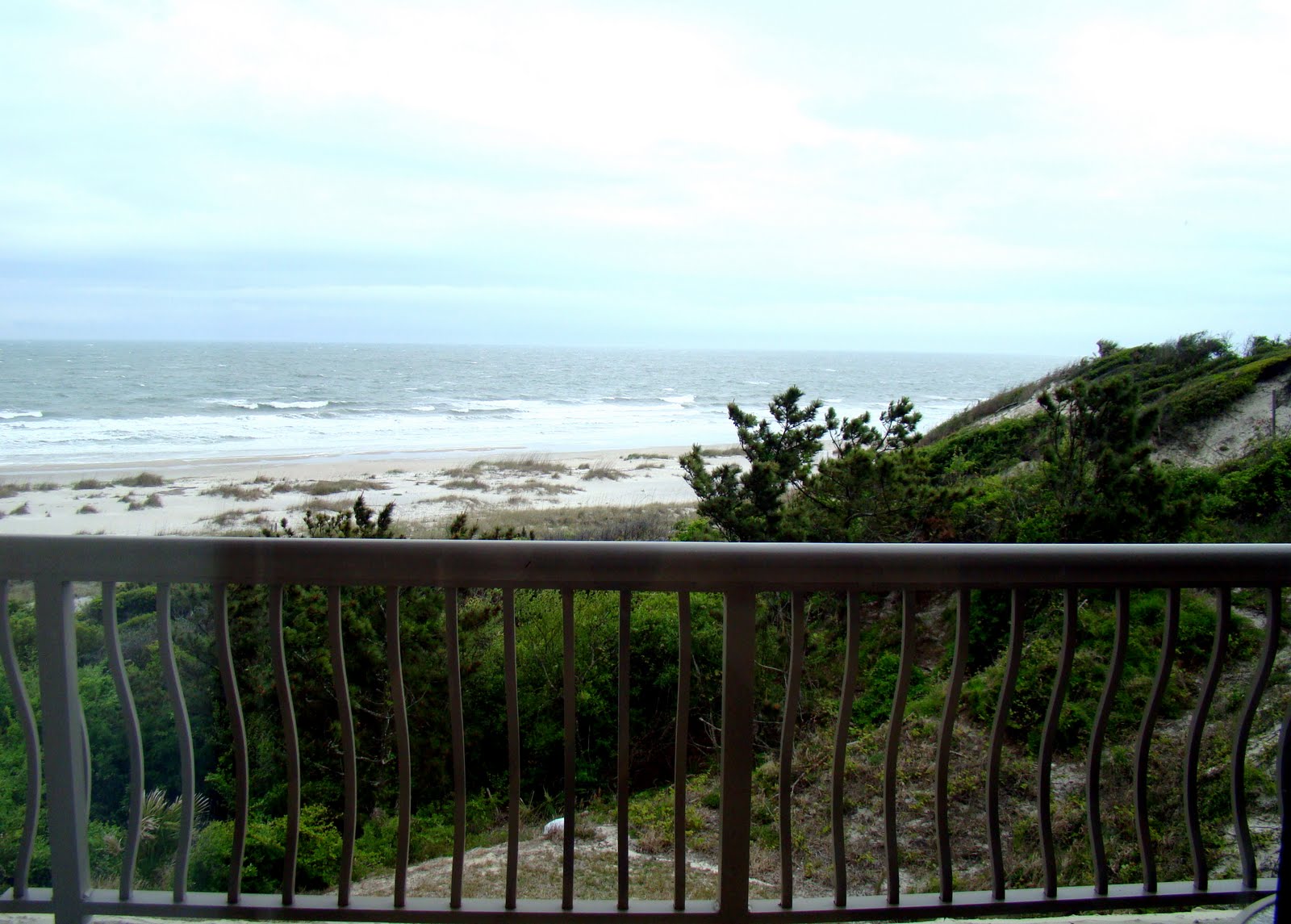 I spent my day watching tv and messing around on the computer. I honestly had a good time! I tried to blog but I just am not a laptop person and it was too tough to edit pictures without a mouse (call me old fashioned, whatever) so instead I looked at house plans for when we build and googled around to learn more information about counter top choices, pool types, etc. I learned a lot and looking at house plans is ADDICTING!!! That afternoon when Zach got back I just felt like looking at more plans (haha) so he read on the porch (he’s reading Lovely Bones

my fav!) and we got ready to go to dinner. 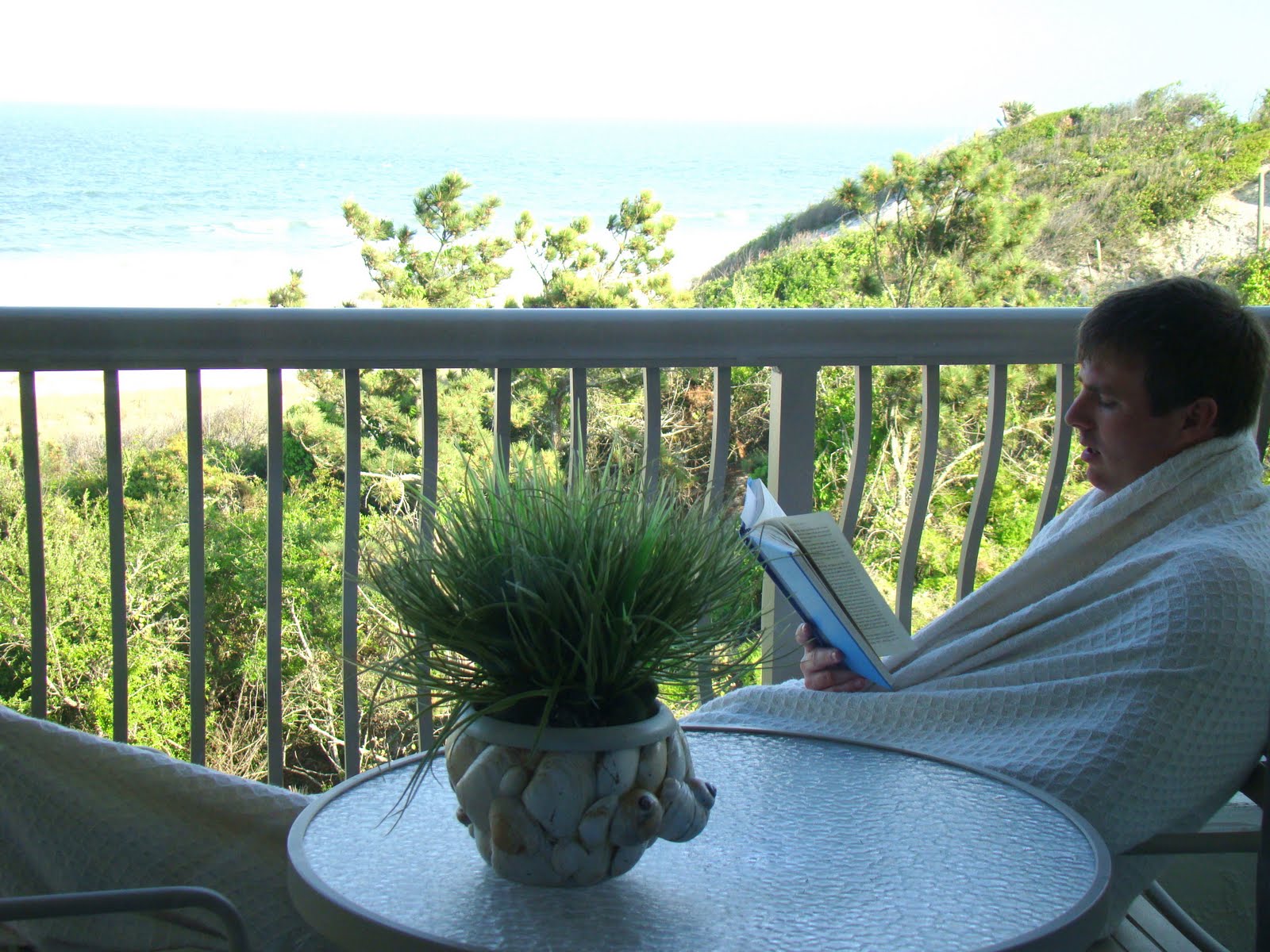 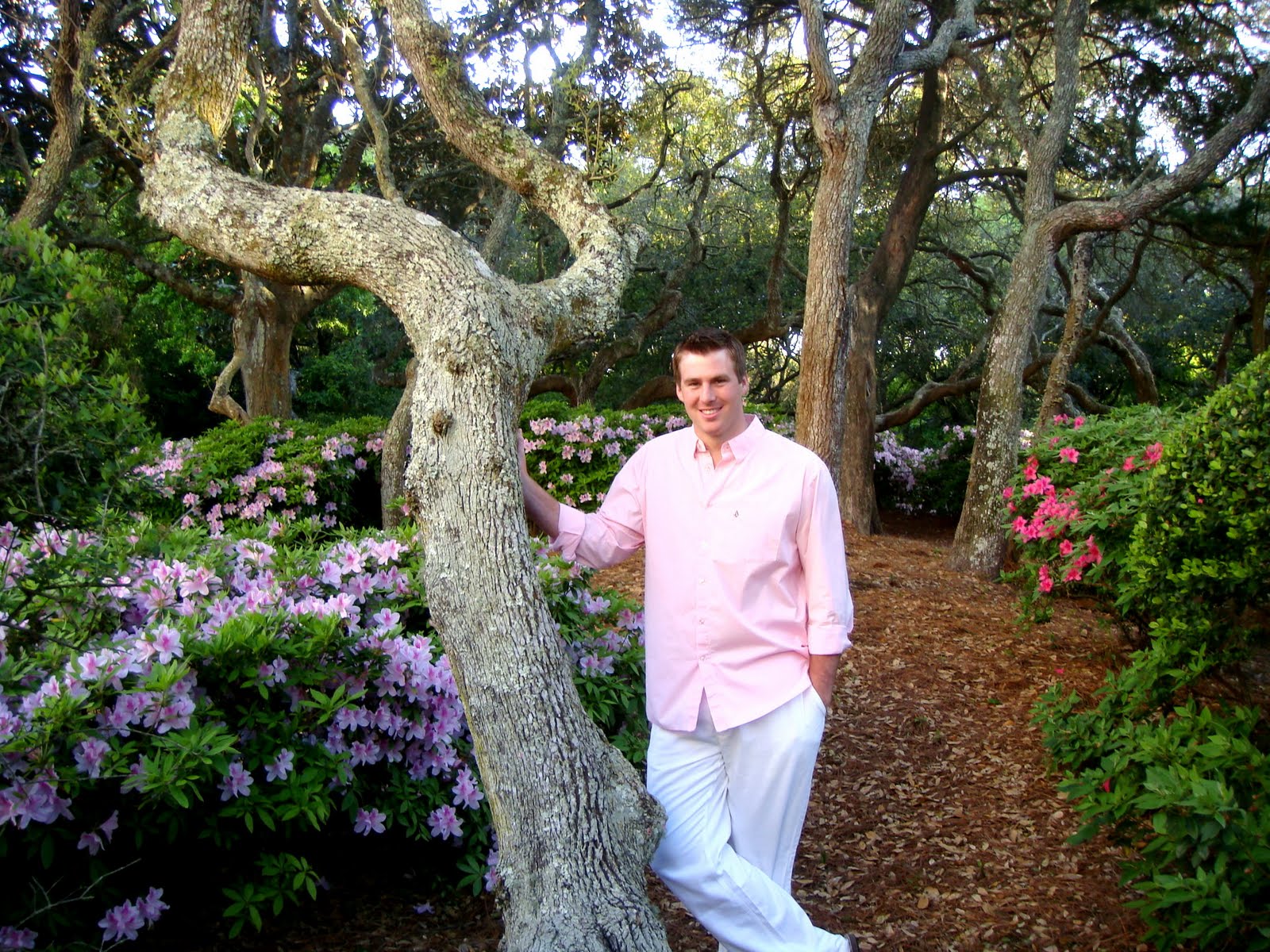 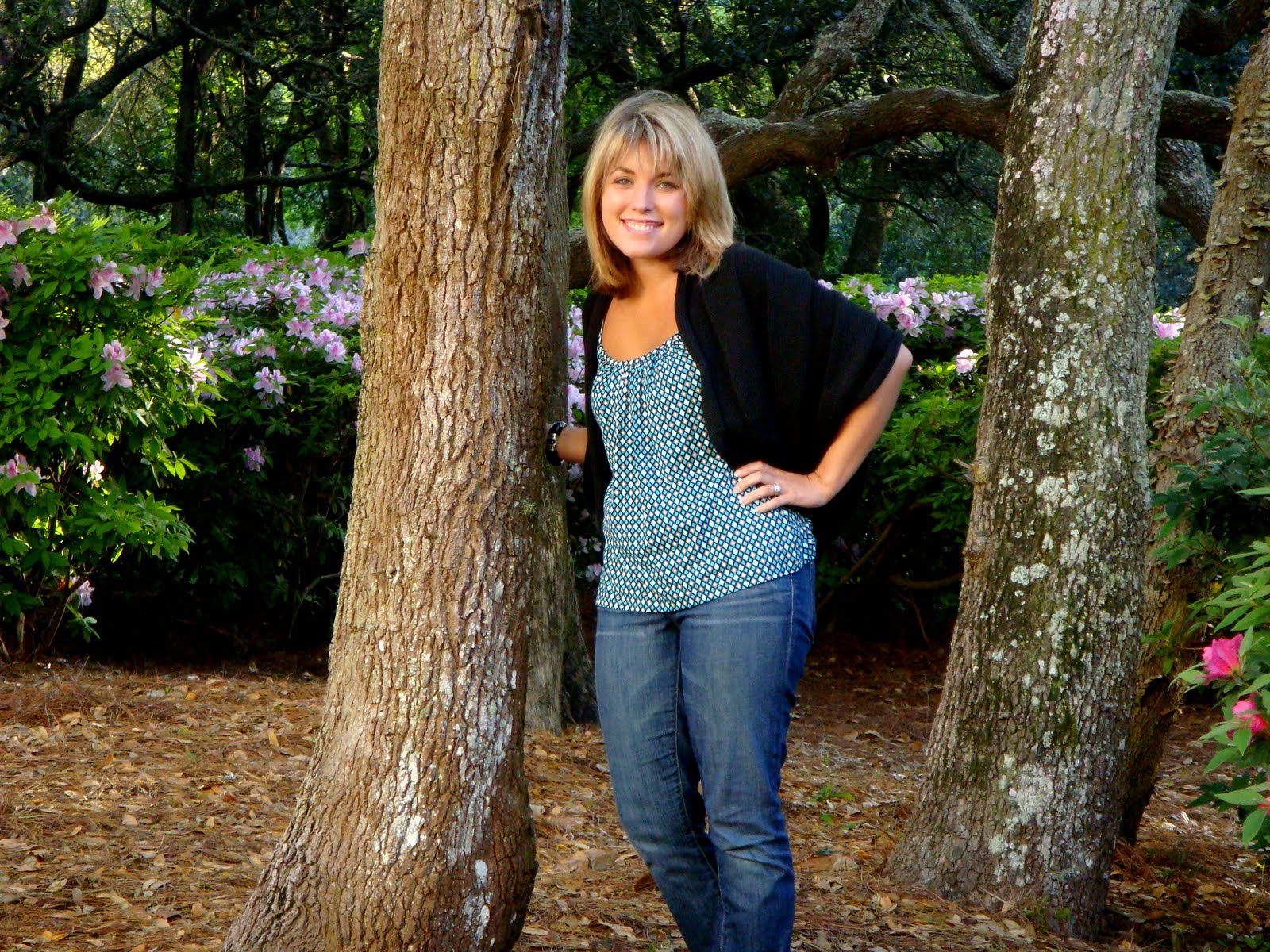 All I wanted to eat was some warm food and duh, Italian was our pick! Zach researched two restaurants and we tried the first one but we waited and waited for service so we left and went to the second one instead! It was yummy as was the ice cream we had afterwards!!! 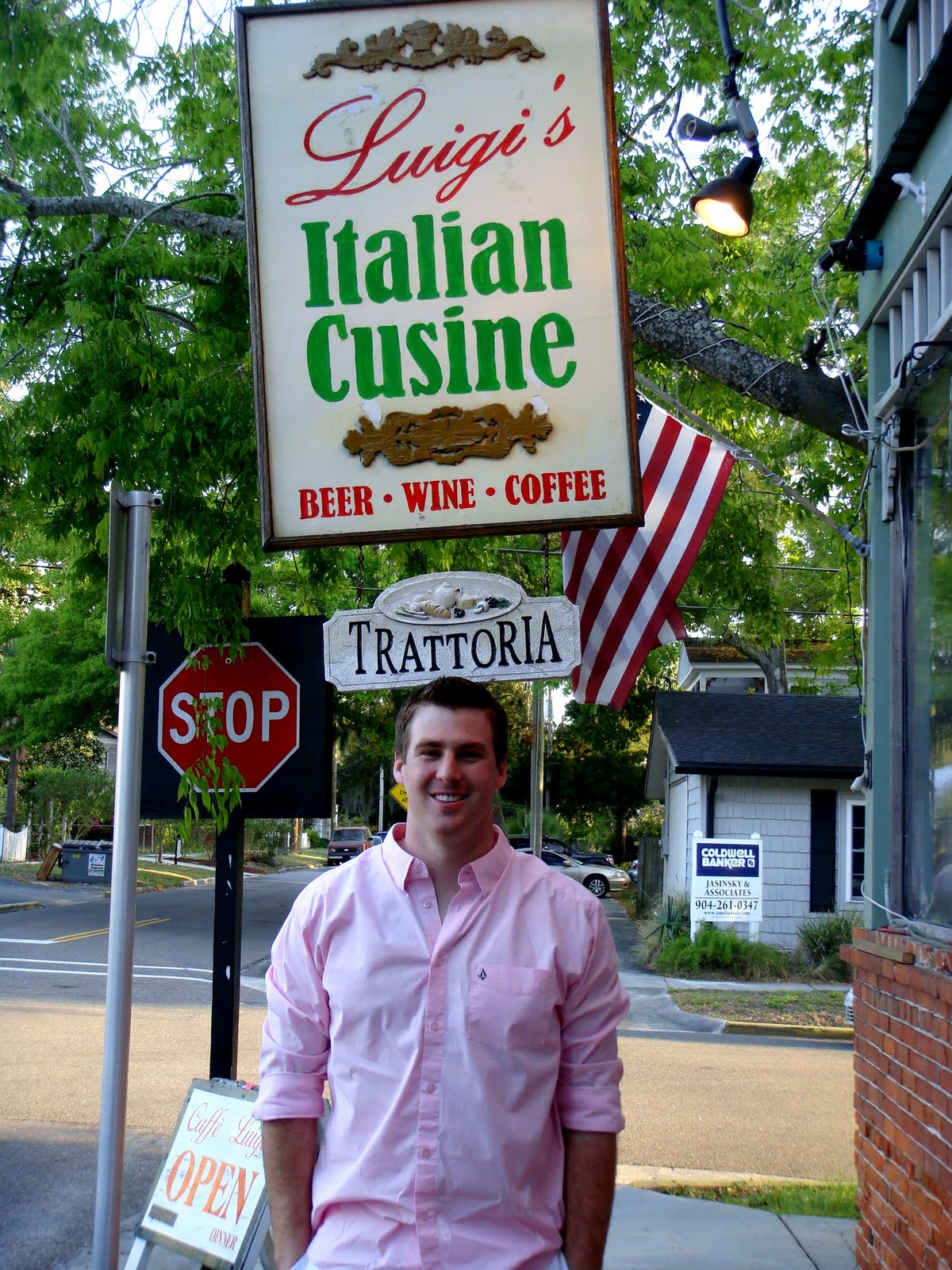 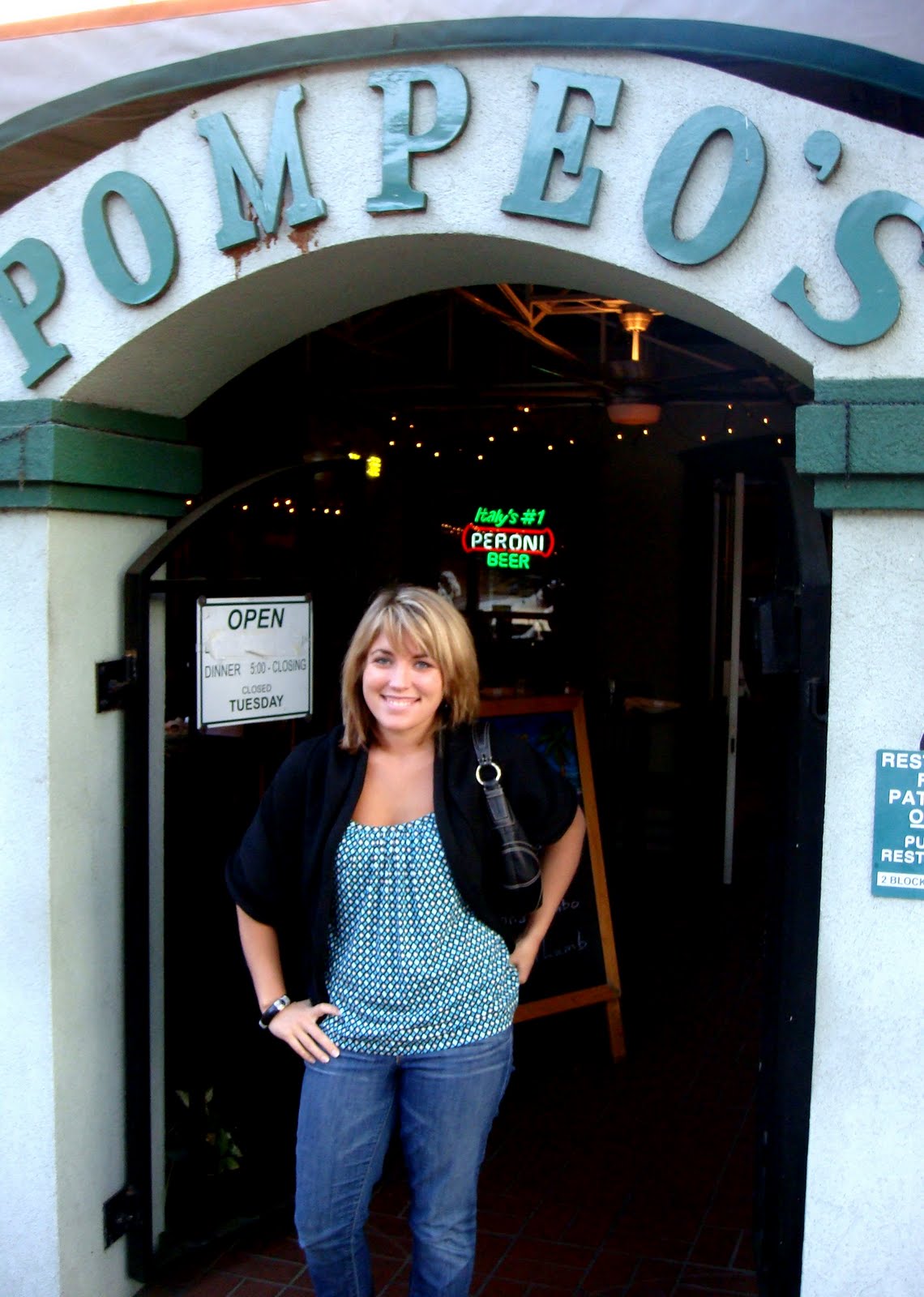 and duh, you can’t lose with ice cream! 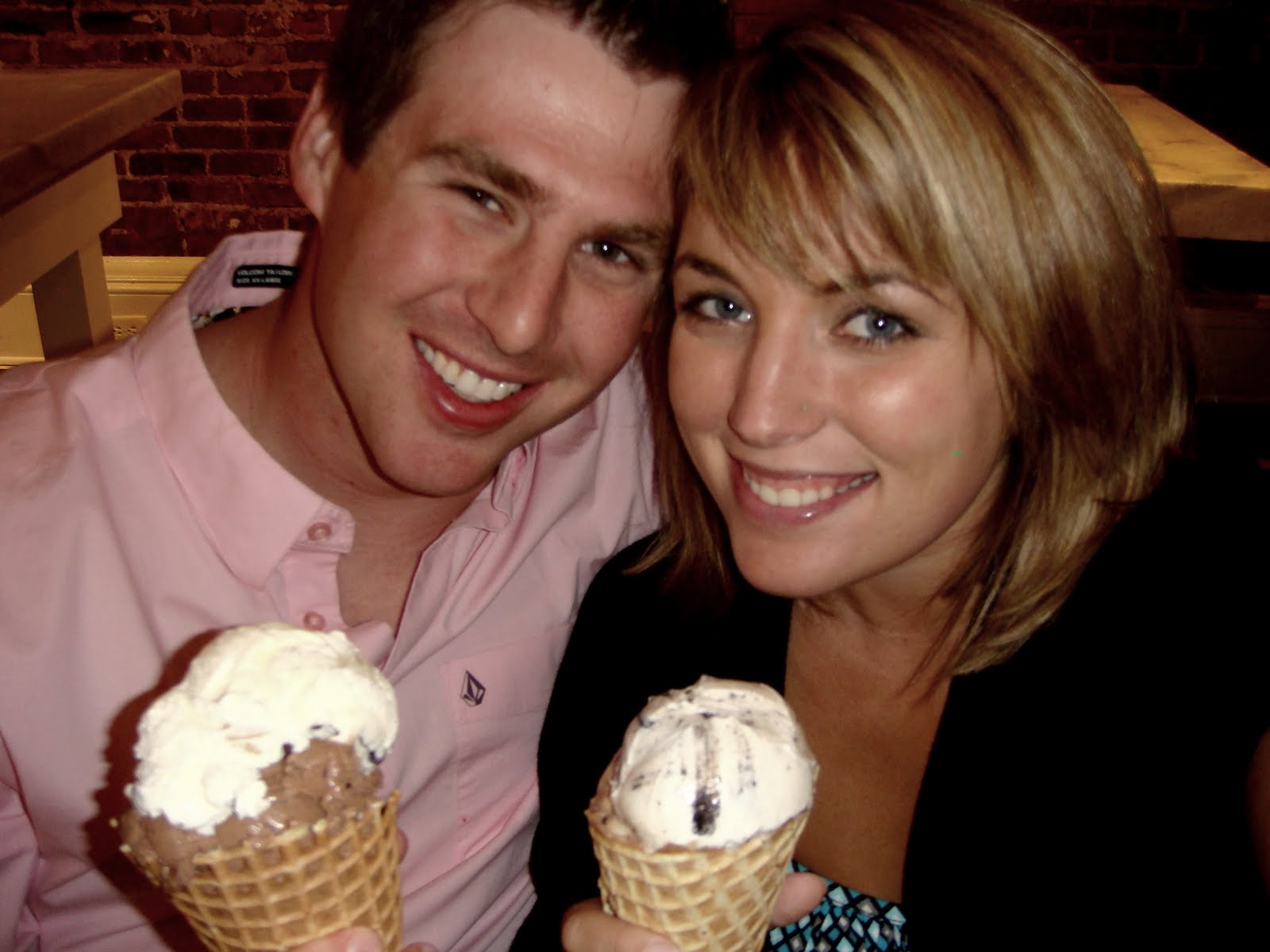 Tuesday I wasn’t feeling much better. We slept in again, ate the continental breakfast again and still had a fun day just cuddling in the bed and watching Season Two of The Office

. I know I’m mega lame that I’ve never watched it before but I LOVED Season 1

and Season 2 was even better. It’s a really great show and I actually laugh which is pretty rare for me haha. It was a little warmer so we attempted to lay out but only lasted an hour. Laying in the sun when you are sick is not very fun at all. That night Zach’s regional coordinator took all of us out for a nice dinner at a place called 29 South. We got to visit with our friends again and enjoy an awesome meal…I had filet with lobster and I even tried some escargot!!!

We met everyone at their hotel before dinner and we had to run down to the beach for 5 minutes just to at least say we did it! How can you be AT the beach but not actually touch the sand??? It was a must do 🙂

golf course next to the beach 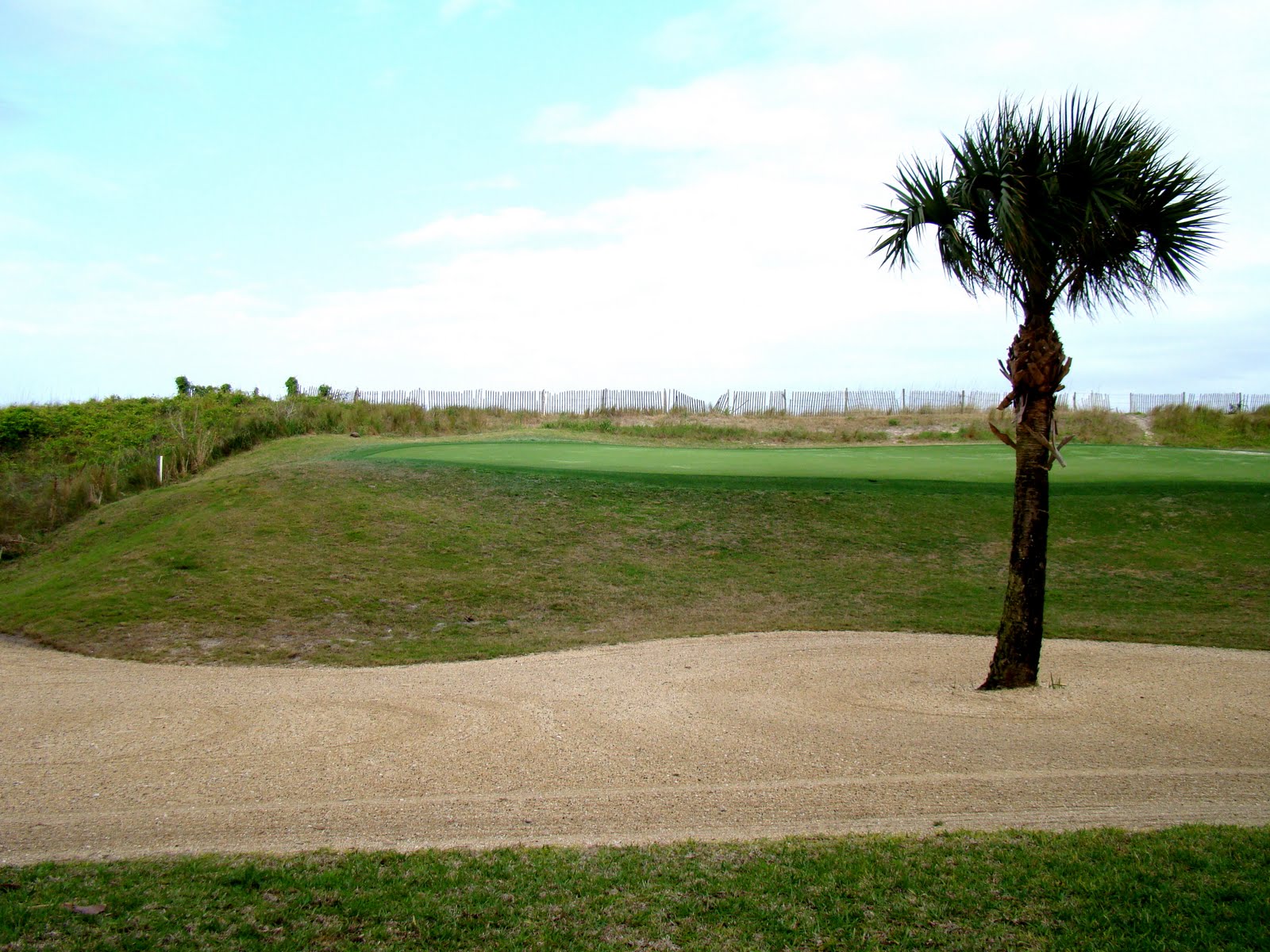 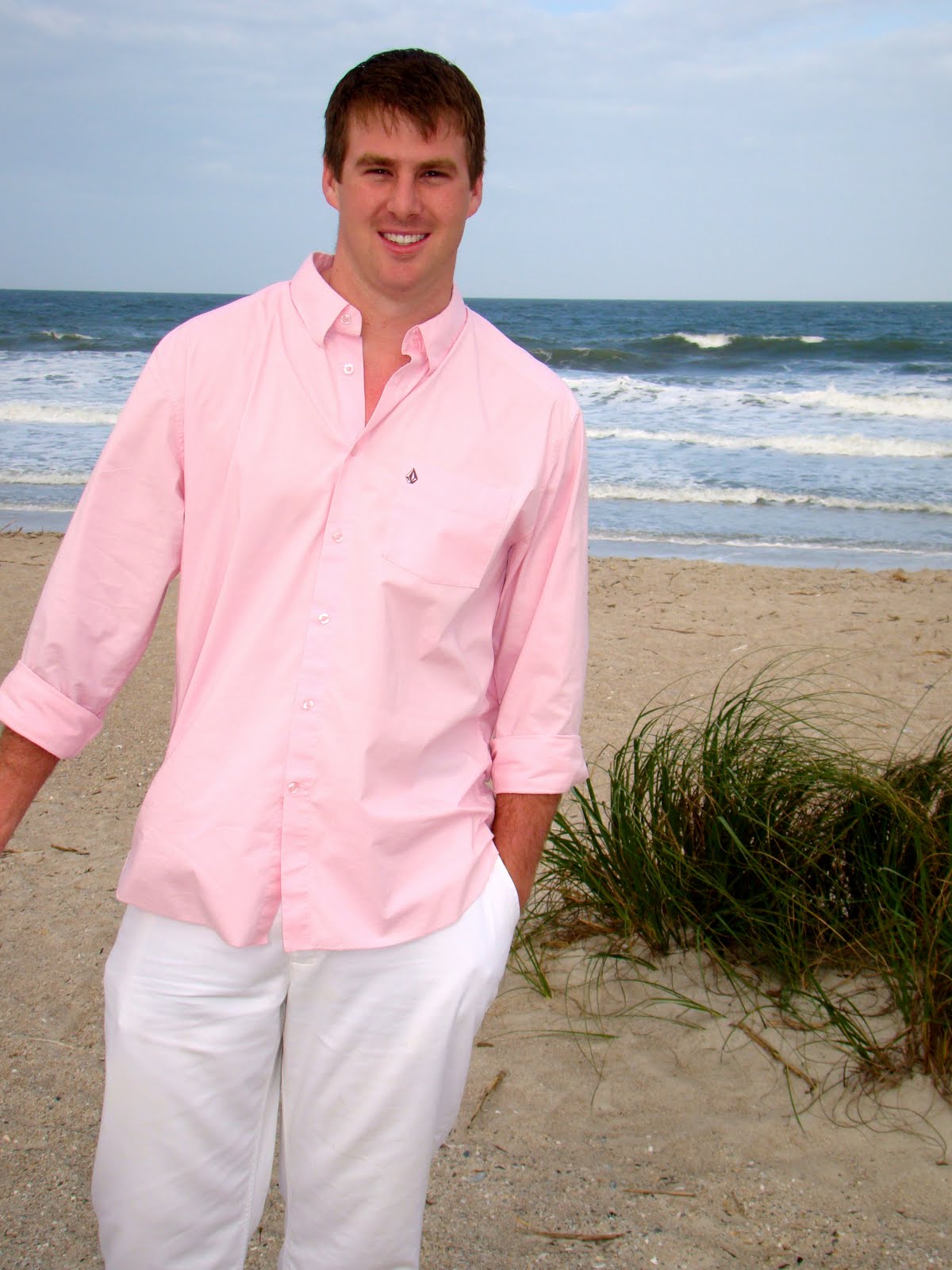 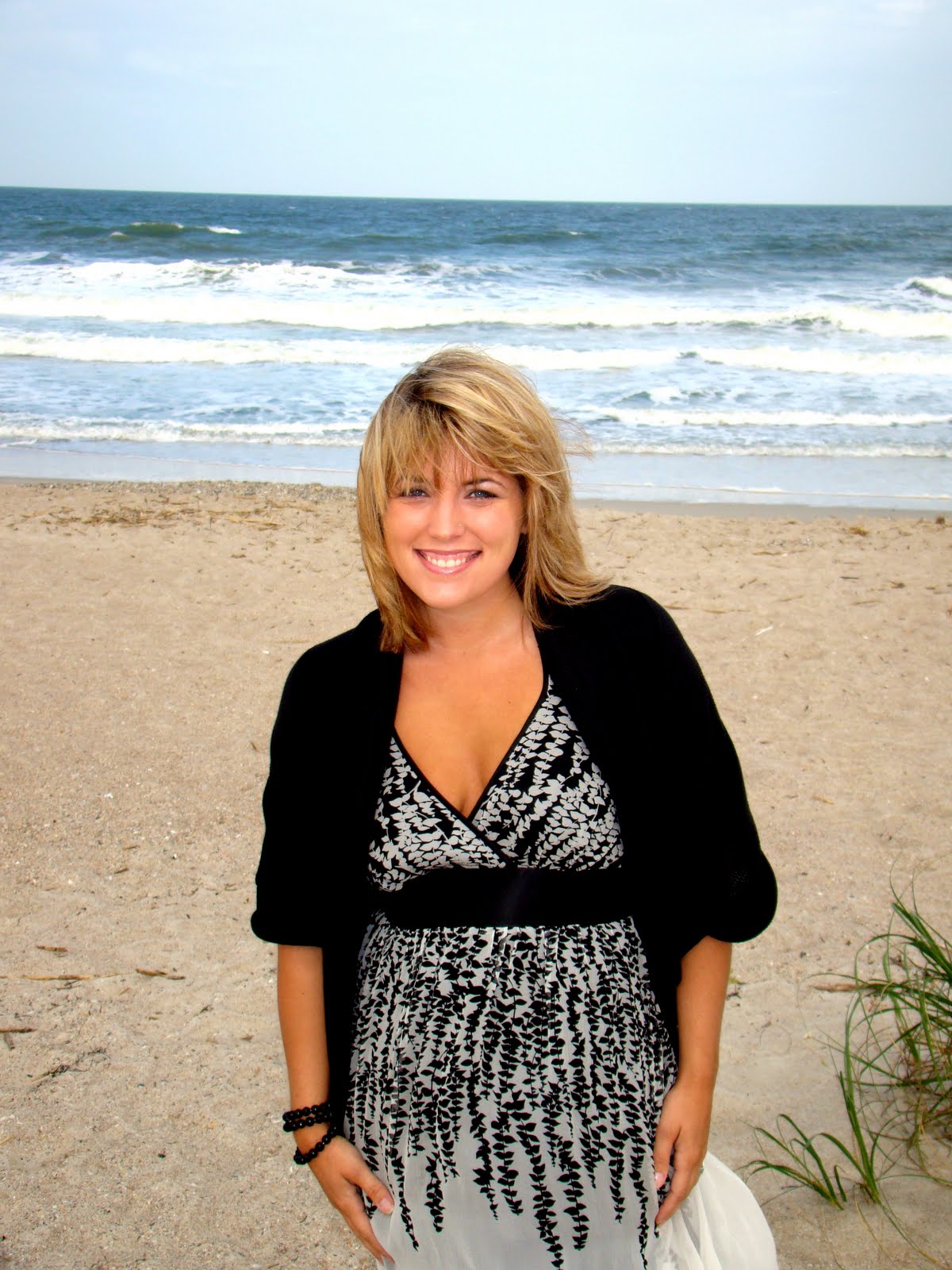 After dinner we headed on home and Zach wanted to try a faster way. It was faster but it was also 8 miles on a dirt road haha! On top of that I had a TON of sweet tea at dinner (there is just something super delicious about sweet tea when I don’t feel good…random…I know) so for the first time in ages we had to pull over on the side of the road so I could pee!!! (Btw a good tip is to open the front and back door and actually lean against the back door so you can kinda prop yourself up and have better aim in order to avoid your pants haha). We got back home and picked up Kye at Zach’s parents house on the way. We’ve never gotten him up in the “middle” of the night (it was 10…but he’d been asleep for 3 hours!) like that before and while I don’t want to do it too often (I LOVE when he’s excited to see me and this kinda killed that excitement) it did work out fine and he went right back to sleep when we got home!

my souvenir from Amelia Island…we are cheap and don’t buy tissues at home so I took the ones from our room haha! 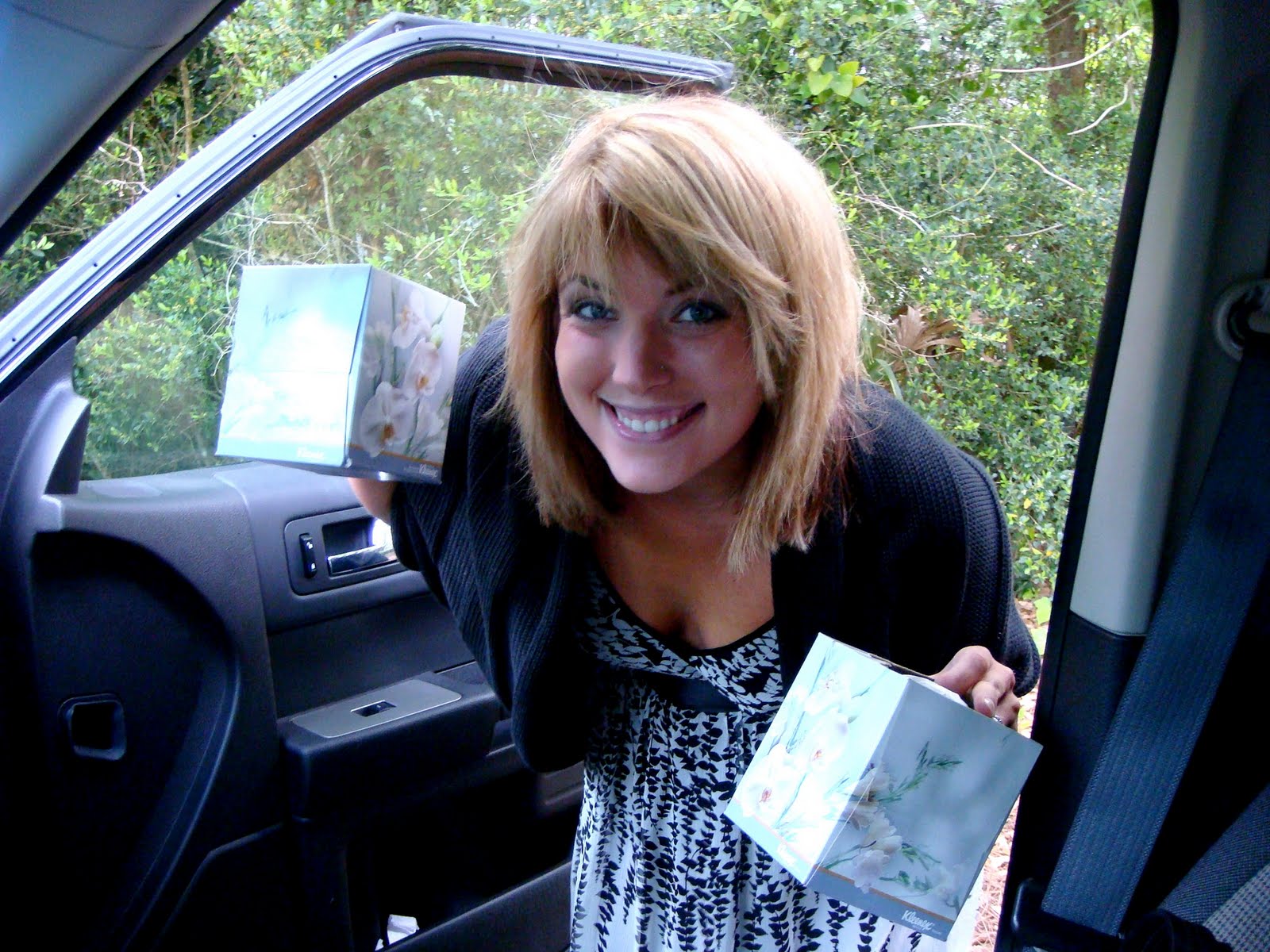 I know it sounds like a lame trip. And I guess if I had to list my Top 10 Trips Ever that it wouldn’t make the list (probably not even the Top 20 honestly!) but I’m GLAD that since I had to be sick that I was sick there. I mean it was cold anyway and not the best laying out weather and when you have a baby you don’t want to be sick at home. I would have been MISERABLE trying to take care of him and I would have probably just made him sick all over again too! While it’s been a WEEK and I’m still not 100% better I still greatly appreciated the rest and relaxation and the chance to spend time with my husband! All couples need time to re-connect and this was a great trip for that reason alone 🙂 He even surprised me with flowers the day we got back and told me how great of a time he had! What a sweet guy…I guess I’ll keep him 😉 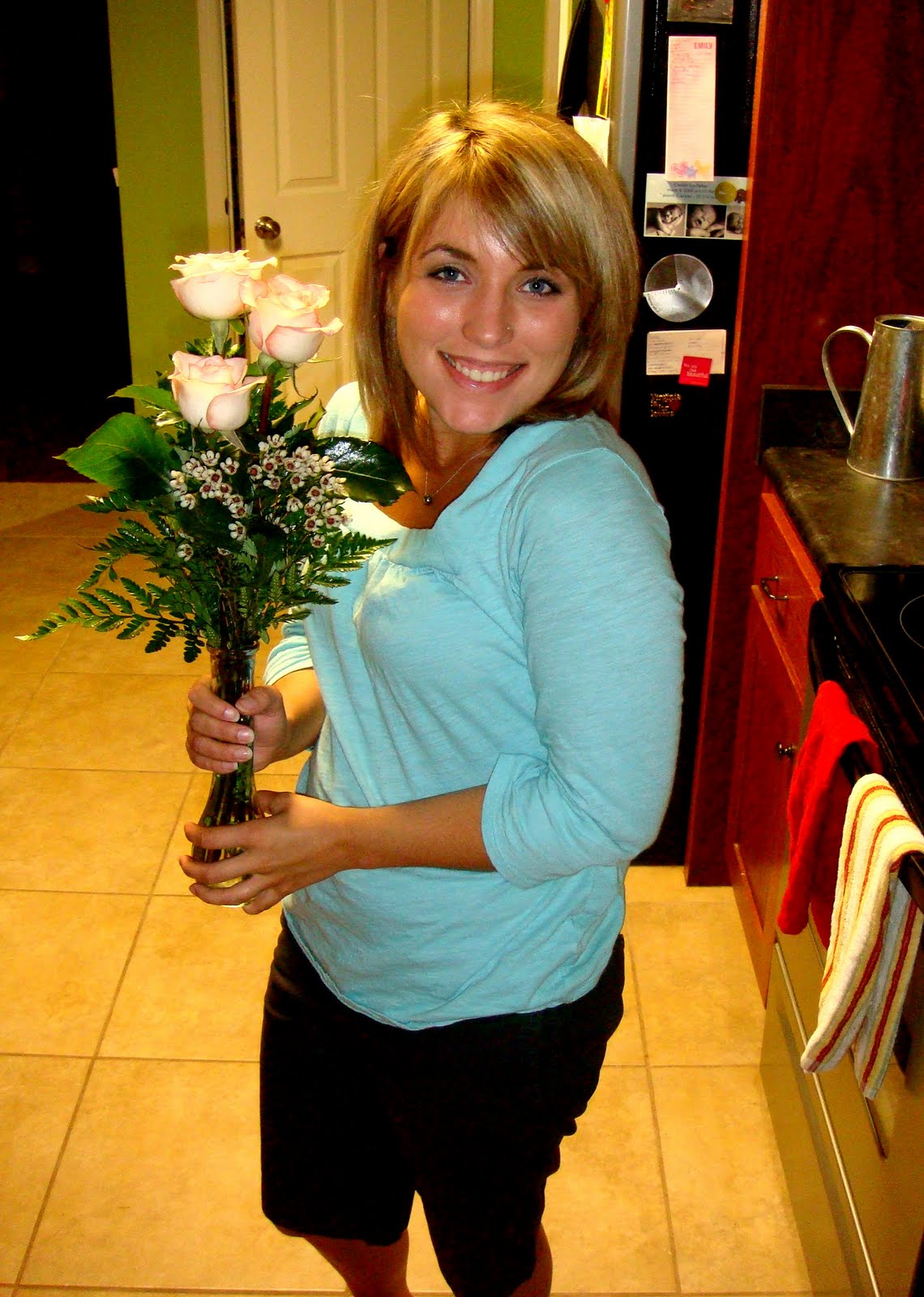