Last Friday (I know I’m running behind, whatever!) Zach and I drove to Columbus for the Aflac State Kick-Off Meeting. Mrs. Charlotte and Mr. Rusty also went to the event as Mr. Rusty was being recognized for his 20th year with the company. Since obviously Mrs. Charlotte wasn’t available to watch Kye for the day I asked Ashley to do it! She did a GREAT job and I’ve asked her to write about it as a guest blog entry sometime soon! I’m interested to hear what she thought about watching Kye (it was her first time) and whether or not she liked the schedule he’s on! 🙂

Since I am no longer an Aflac agent (it made sense for tax reasons for me to give up my Aflac license but I still have my insurance license so I can pick back up the Aflac one if needed in the future) I didn’t think I’d be able to go to the meeting. Zach put in a call and Tripp (the state coordinator) let me come since Zach was (again!) #1 in the state!!!

It was a nice time getting to see all the Aflac people and getting to support Zach in all his many awards. Football was the area of Zach’s life where he shined and I know we all miss those days so I’m thankful that he works for a company that offers him competition and an arena in which to thrive! He won many awards; got recognized for making President’s Club in 2009 (Paris trip), he made Key Club (where the prize is a gold ring that they upgrade again and again every time you win!), he was the #1 agent in our state for 2009, and won several other awards too. 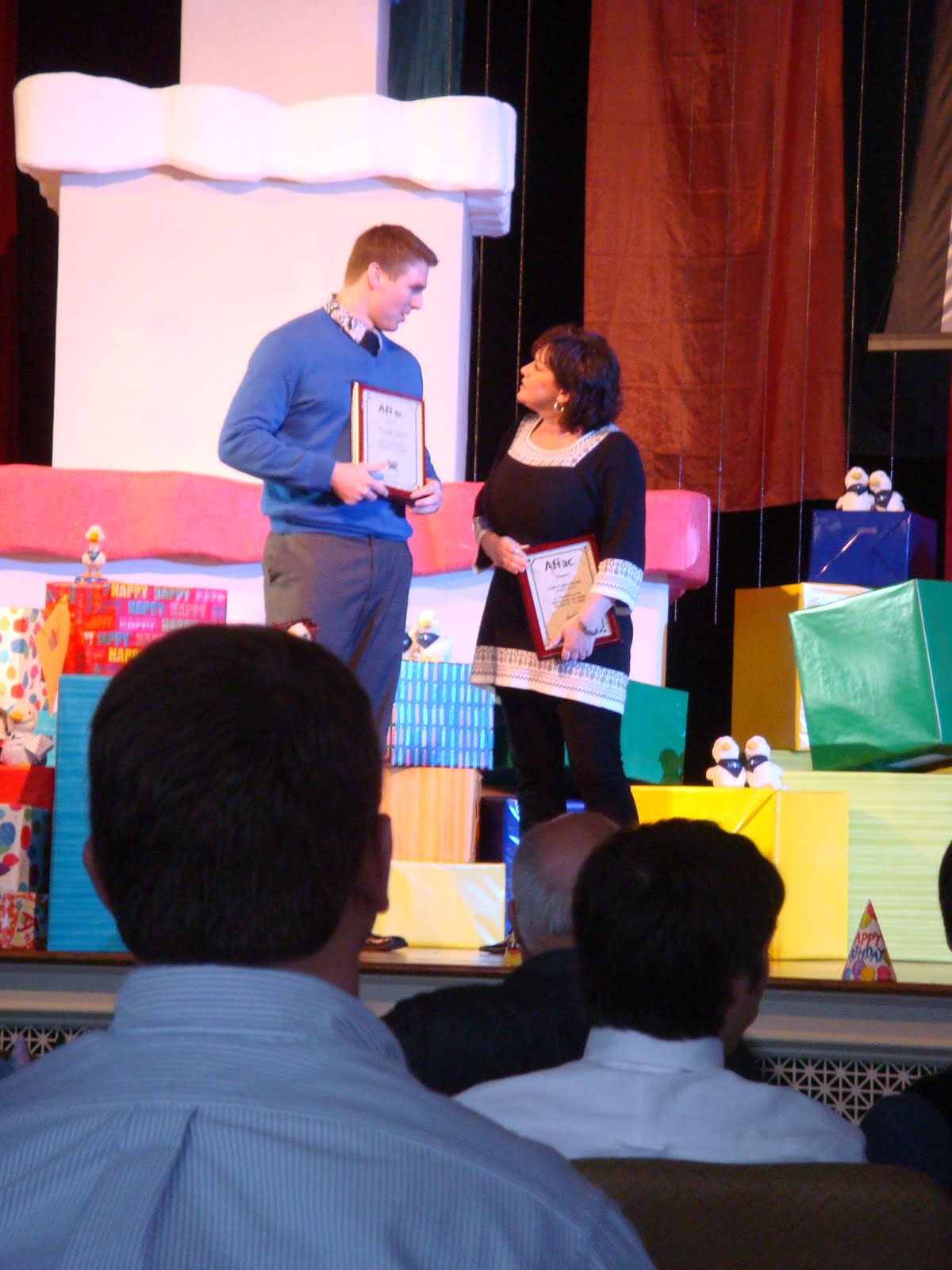 Of course I’m proud of him! Especially for all his hard work last year. 2008 was his first full year with Aflac and it was an adjustment. He’s used to seeing his other family take Fridays off to golf or whatever and it’s hard when you’re just starting out to realize that you can’t do that stuff yet!!! In 2009 Zach worked his BUTT off! The economy was MUCH worse than 2008 but he still wrote almost just as much business and still managed to be #1! I’m hopeful that he’ll do even BETTER in 2010! We have our sites set on landing some big groups and hopefully hiring some awesome people (if you are interested in a job where you’re your OWN boss and the awards are limitless let me know!).

It was good that Mr. Rusty came to the event as well. He was not only recognized for his 20 years but he was inducted in the Aflac Ga-South Hall of Fame! He was the very first person to be inducted and they gave him a jersey with his name on the back. They also are putting one of his jerseys in the training room to help motivate new people to see how successful they can be with the company! 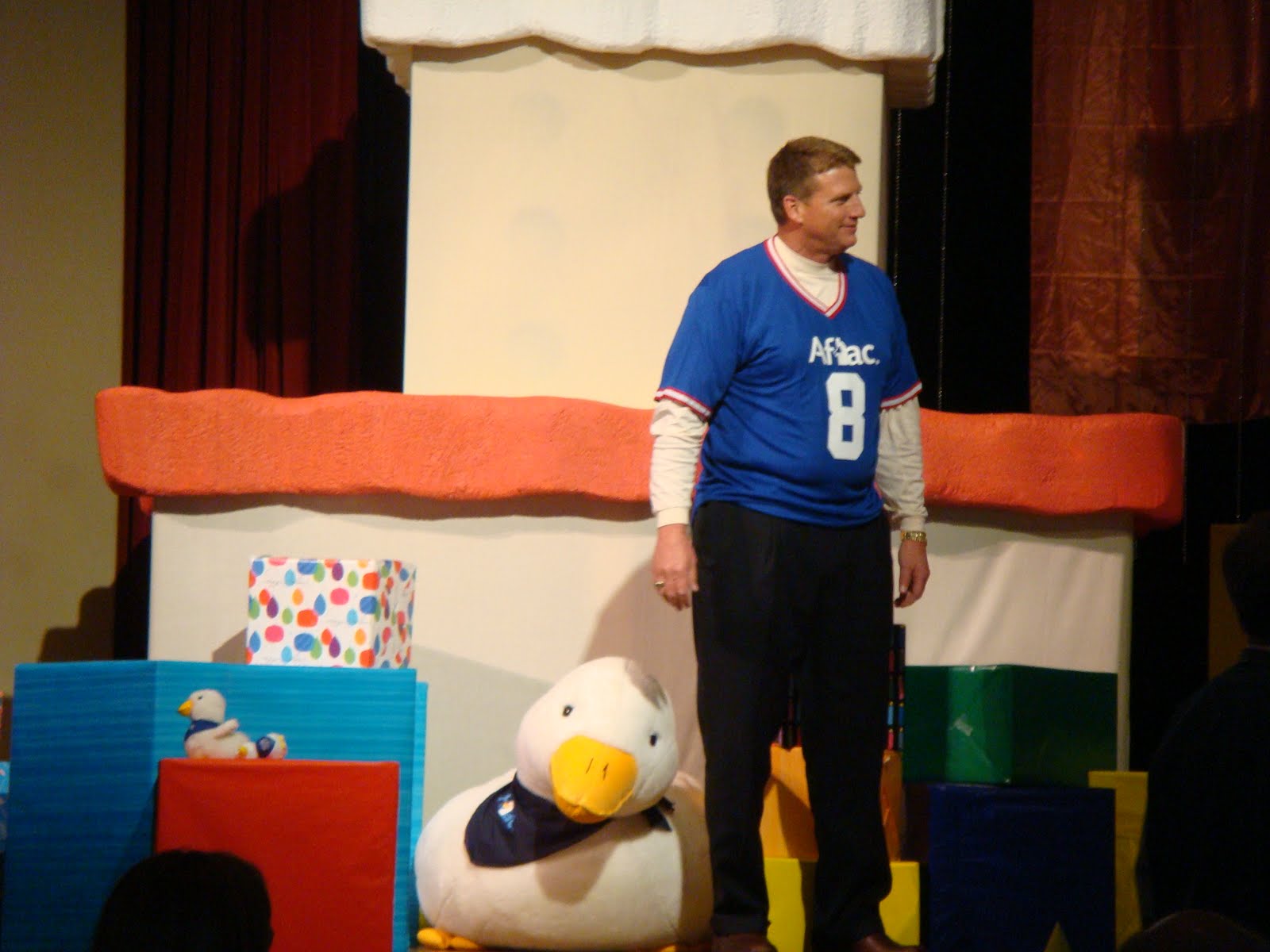 My favorite part of the day is getting to hear about all the upcoming trips! Zach has already qualified for 5 days in Amelia Island in March. Then this year he should also qualify for us to go to Jamaica for 5 days and on a cruise to the Caribbean for 5 days! It’s SUCH a nice ship! We’d have a room with a balcony and it’s one of those ships that has a putt-putt course, mall, surfing pond, and tons of other stuff. It’s a Royal Caribbean ship but Aflac will rent out the ENTIRE boat! How fun! AND if Zach makes it as one of the top 85 agents in the NATION (in 2009 he was #86!!! Missed the trip by ONE person!!! So disappointing!) for this year then we’ll get to go to BERMUDA next year!!! Wouldn’t that be fun?!?

This year was a special kick-off meeting. The theme was “Happy 10th Birthday to the Aflac Duck” and they actually got the REAL duck featured in all the commercials to come to our meeting!!!! A real celebrity 🙂 haha 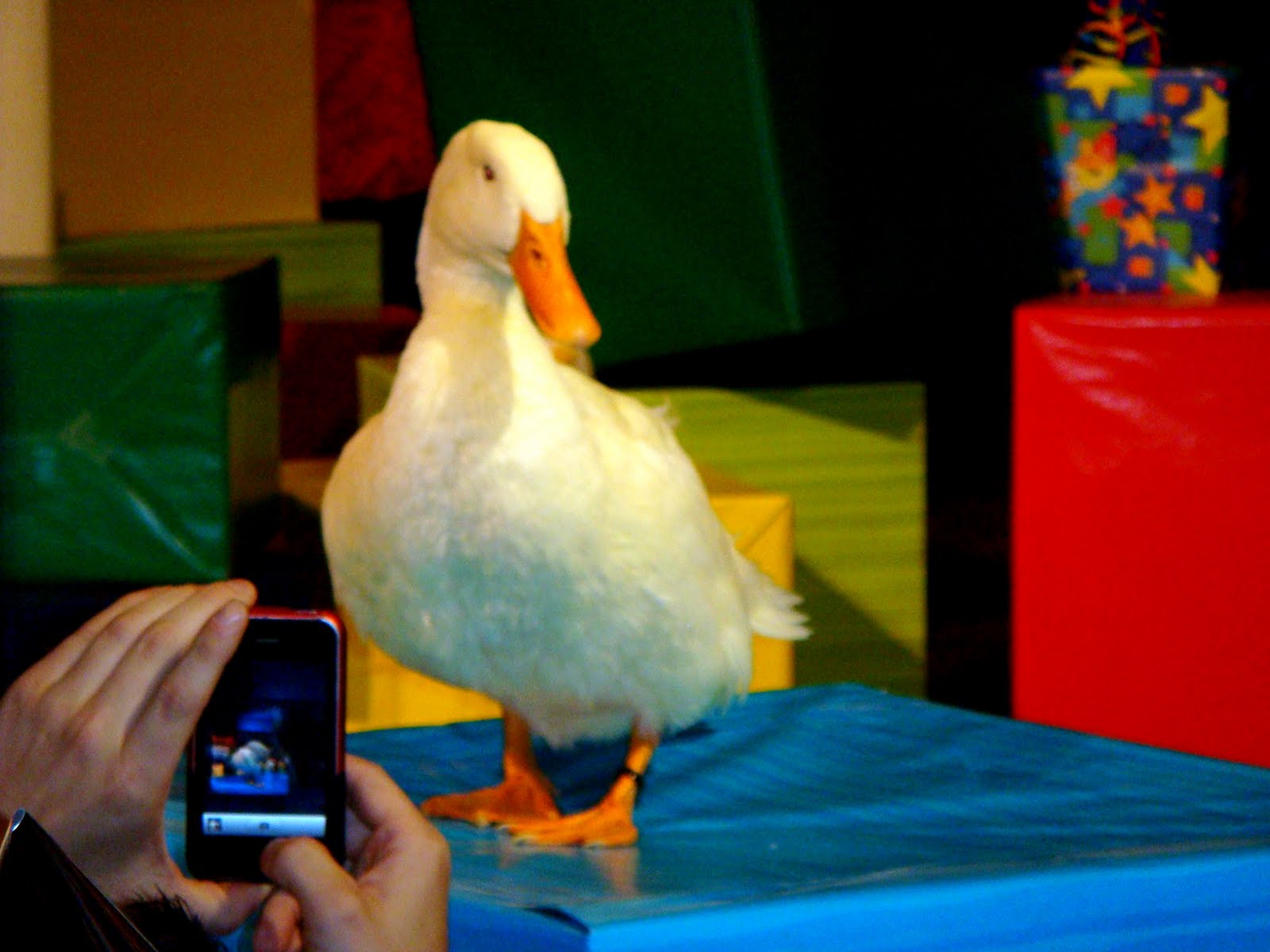 we all sang Happy Birthday to him 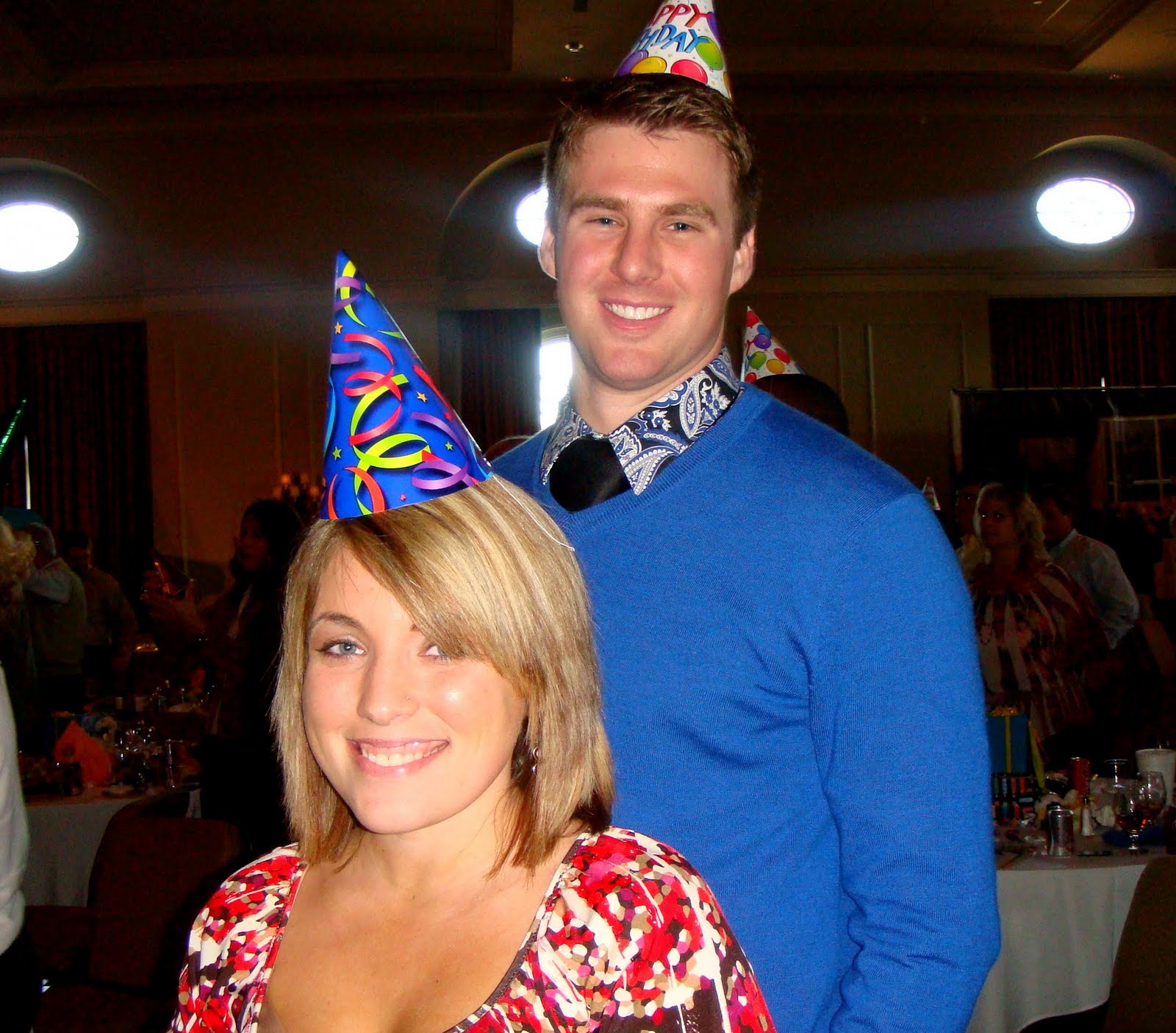 While seeing the Aflac Duck was cool the neatest part to me was that Mr. Paul Amos came to the meeting. He is one of the ORIGINAL FOUNDERS of the company! It was started in Columbus, GA by three brothers (all Amos brothers) and he’s the last living brother. Isn’t that awesome? Zach and I had the chance to meet him and his adorable wife while in Paris and it’s such a unique opportunity to get to see him in person. He’s an incredible man who truly loves the Lord, his company, and his employees. His son is currently the CEO of the company and Tripp Amos is his great-nephew who is our State Coordinator. I love that it’s still a family company!!! 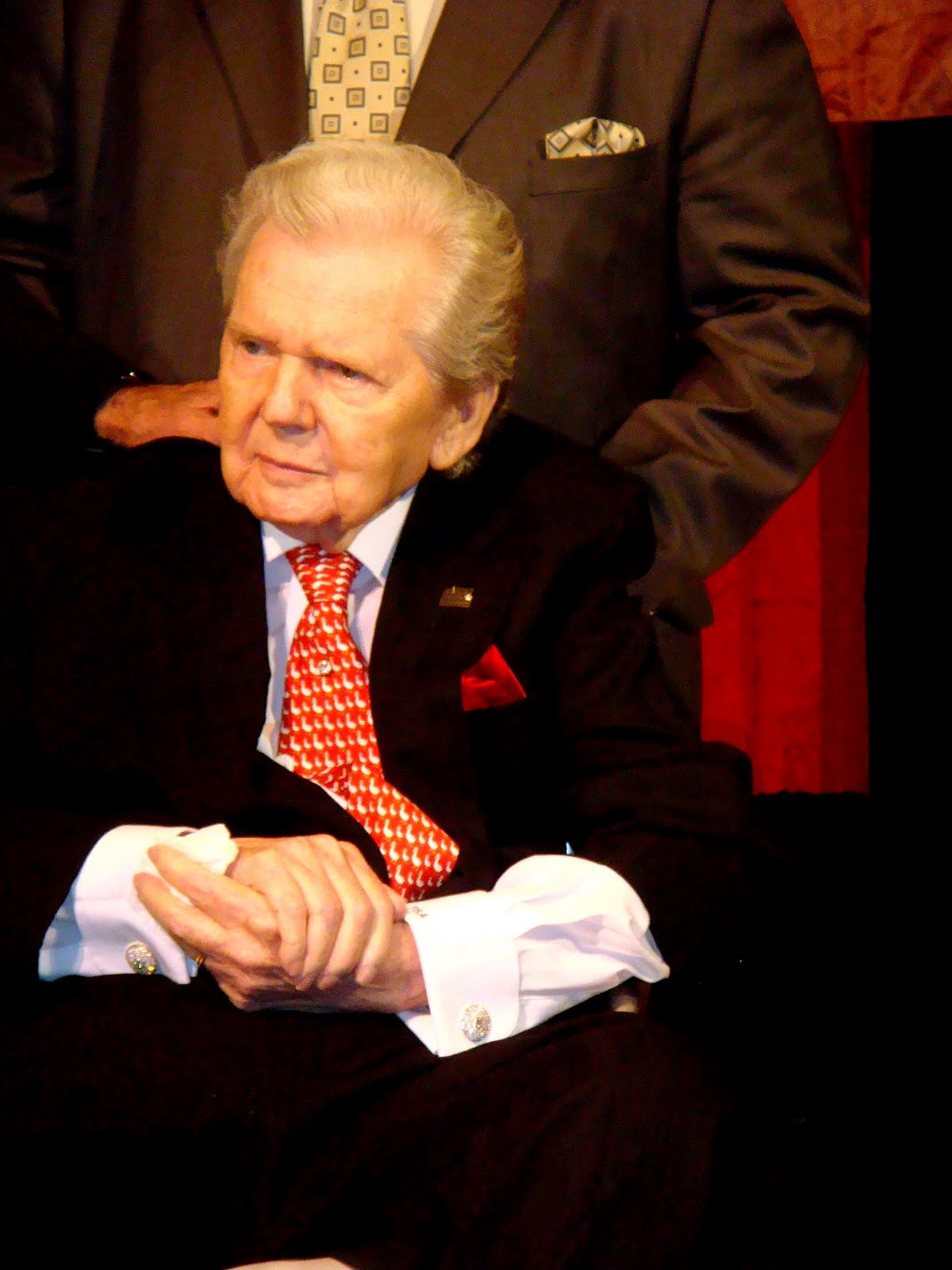 Tripp, the Duck, and Mr. Amos! 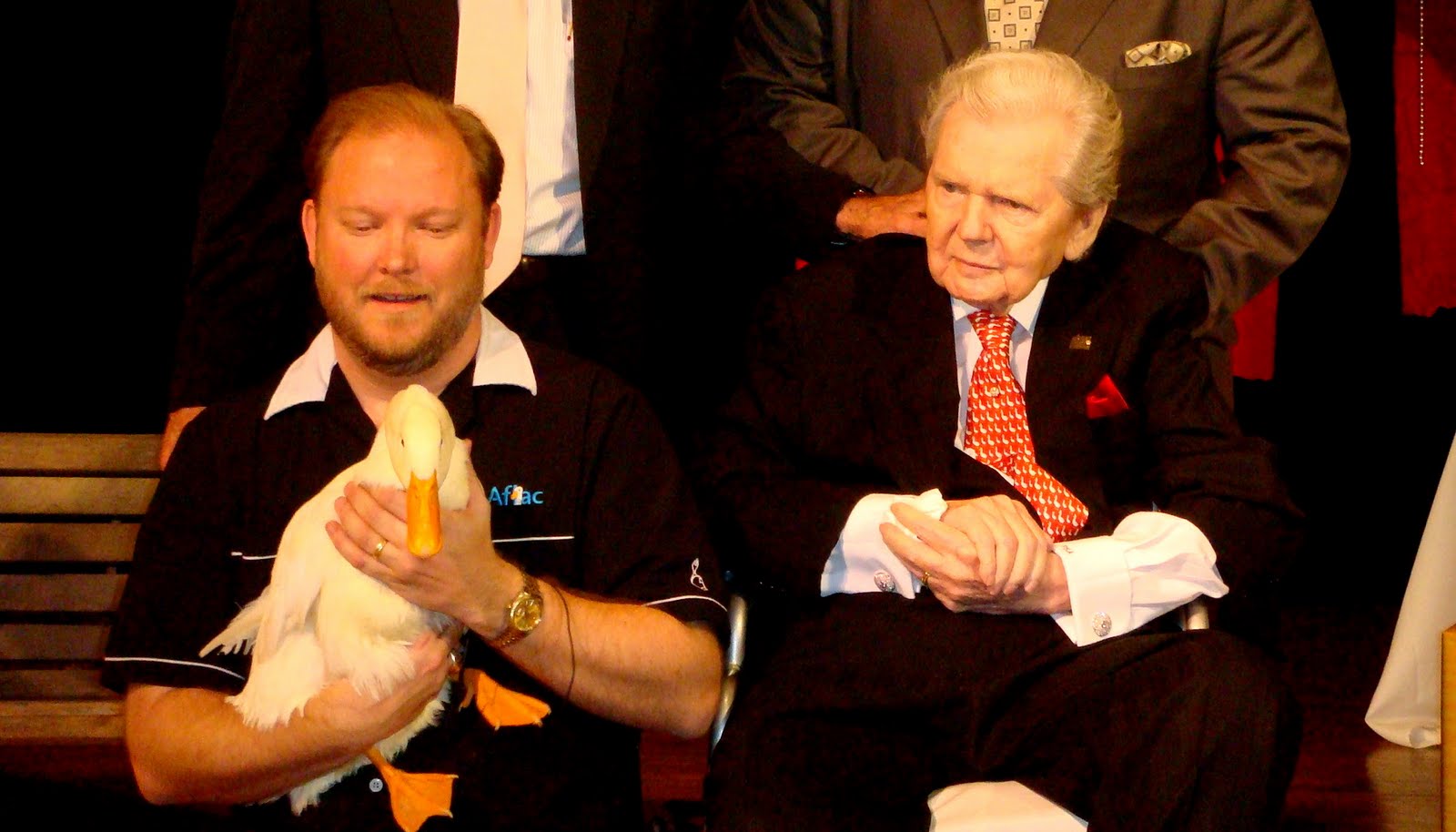 Even though it was a LONG day (Columbus is a 2 1/2 hour drive for us!) it was fun and I’m thankful that I was able to go. These kick-off meetings always make us excited to be part of such an amazing company and motivate Zach to do the BEST he can for this year!