This year Mr. Rusty hosted his district Aflac kick-off at a cute little restaurant in town (Willy’s or something?). It’s funny because I’d never even heard of the place and Valdosta isn’t very big!!! The awards night was on Friday Jan 20th at 6:30. All the associates and a date were invited and of course I wanted to go. The problem was…who would keep Brittlynn? Literally EVERYONE (or their significant other) is selling Aflac now! Mrs. Charlotte would be there to support Rusty, Mom is an agent, Casey would be there to support Jordan and even Robyn would be there supporting Matt. We haven’t had anyone keep Brittlynn yet and we weren’t about to have her first time with a sitter be with someone who we didn’t know very well.

Thankfully Mr. Rusty told us we could bring Britt with us for the evening. We ended up hiring a babysitter for Kye. It was the first time he’s had a legit sitter and it was these two sweet sisters from church. We totally trusted them and weren’t worried about him a bit. It did make me realize, yet again, how LUCKY we are to be surrounded by family! Paying a sitter ain’t cheap!!!

We were the last ones to arrive because I had to nurse Britt before we left. It worked out okay though as we made a nice grand entrance 🙂 Here is everyone at the event!

Mrs. Charlotte took this pic, made me laugh that Zach was cut off of the first one! 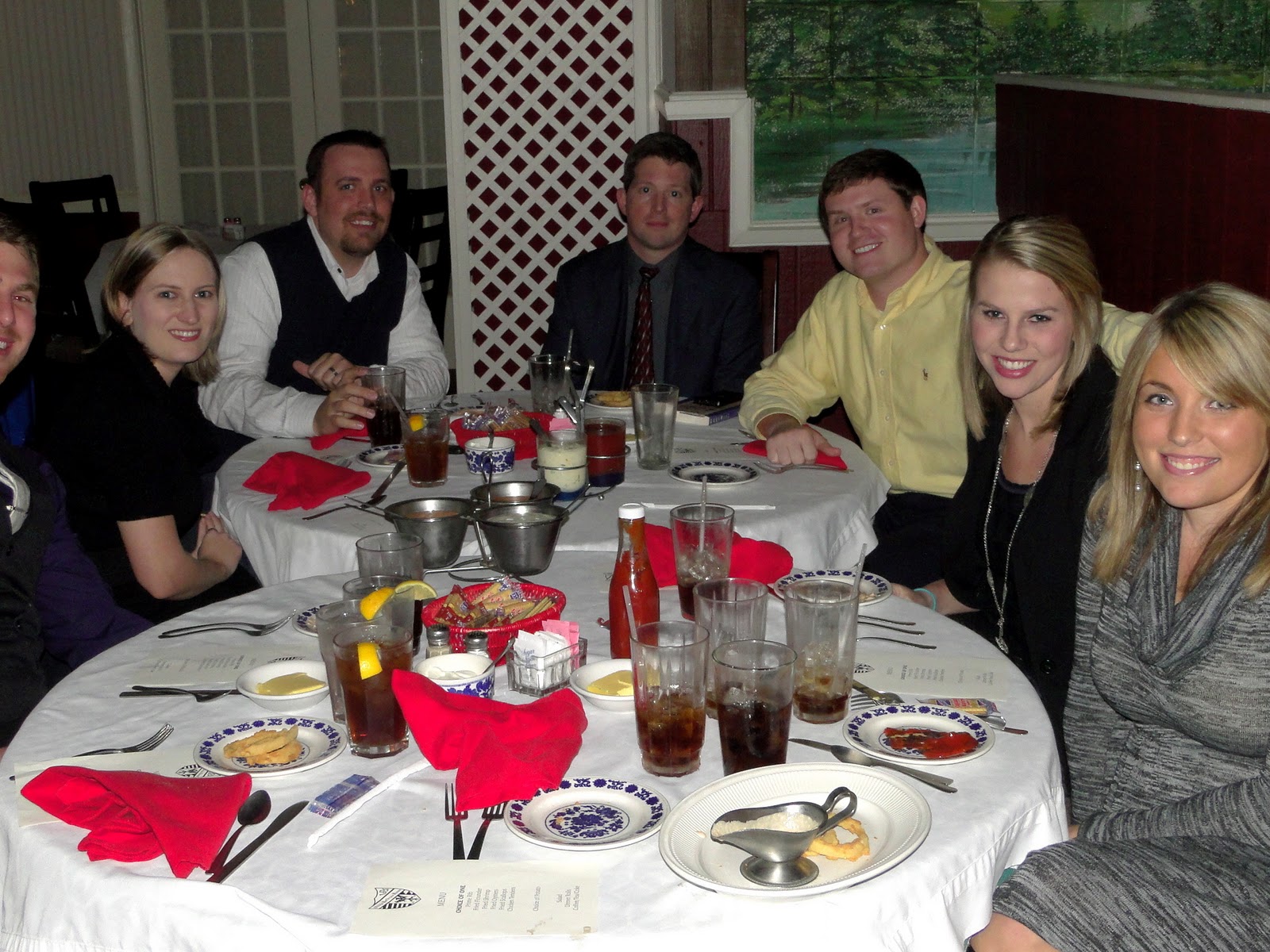 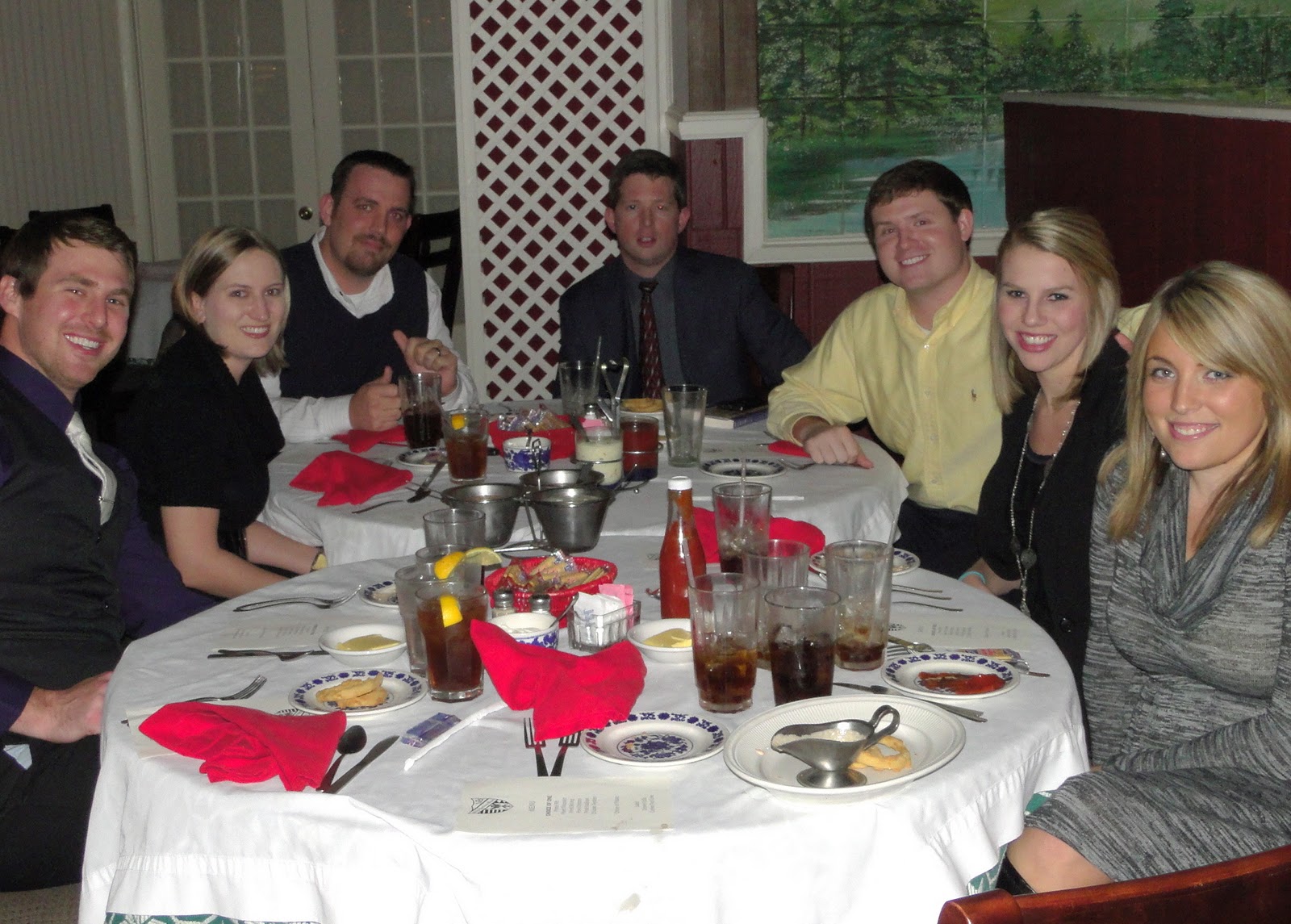 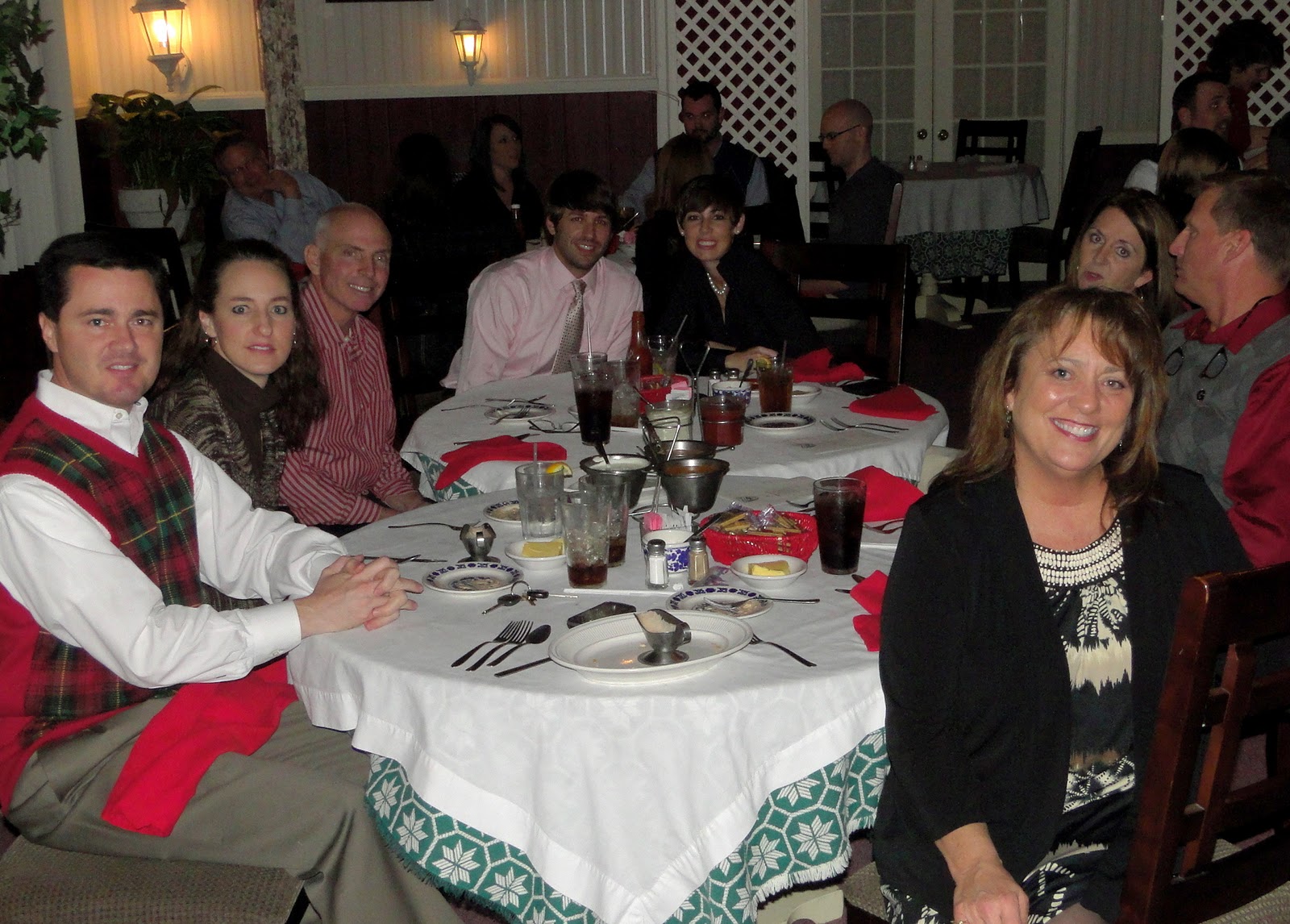 Two new people…not sure of their names (and it was a hilariously awkward moment when I kept trying to introduce myself huh Robyn???), Tim and his wife, Robyn and Matt 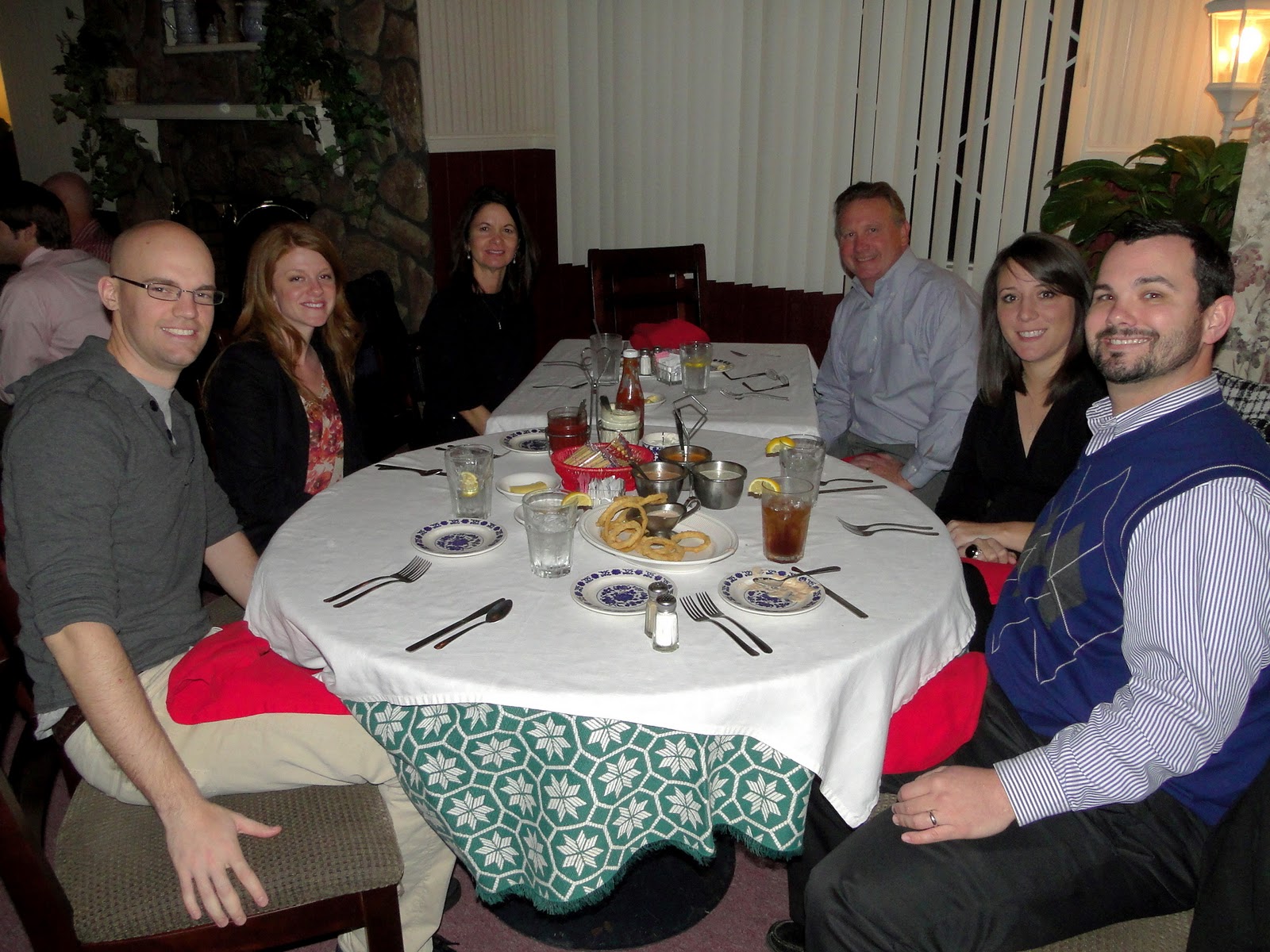 Zach was promoted to a management position in the fall of 2010. Honestly, I didn’t know how I felt about it. Sometimes I still don’t. We originally thought he wouldn’t move up in the company until he had been in it for at least five years. He’d been in it three when he moved up and it felt a little soon to me. But he’s been VERY successful! He has an AWESOME team! Mom actually got the #3 rookie of the year in the WHOLE state!!! How awesome it that?!?!?! I’m VERY proud of how much Zach has stepped up in the management role. He’s matured a lot with this big responsibility and I think he makes a wonderful leader. He’s giving, fair, and does his best to help his team succeed. Alex (who is Javon’s brother-in-law) and Jordan joined Zach’s team at the end of last year and Brandi (who did Britt’s awesome nursery) has joined him this year already.

Zach has been the #1 in production for the entire state since he first started with Aflac. He’s always #1. For the first time…he wasn’t this past year. While he had a HUGE production year (he was in the top 30 associates for the ENTIRE country!!!) and wrote more business than he’s ever written. He still didn’t make #1. He’s disappointed in that, because Mr. Competitive ALWAYS wants to WIN, but he’s a manager now. Any group he opened he opened while training or helping out someone on his team. Anytime he could he sent them to work accounts for him and gave them very generous splits. Yes, he COULD have been #1 but his team wouldn’t have been as successful and that is something Zach takes pride in. 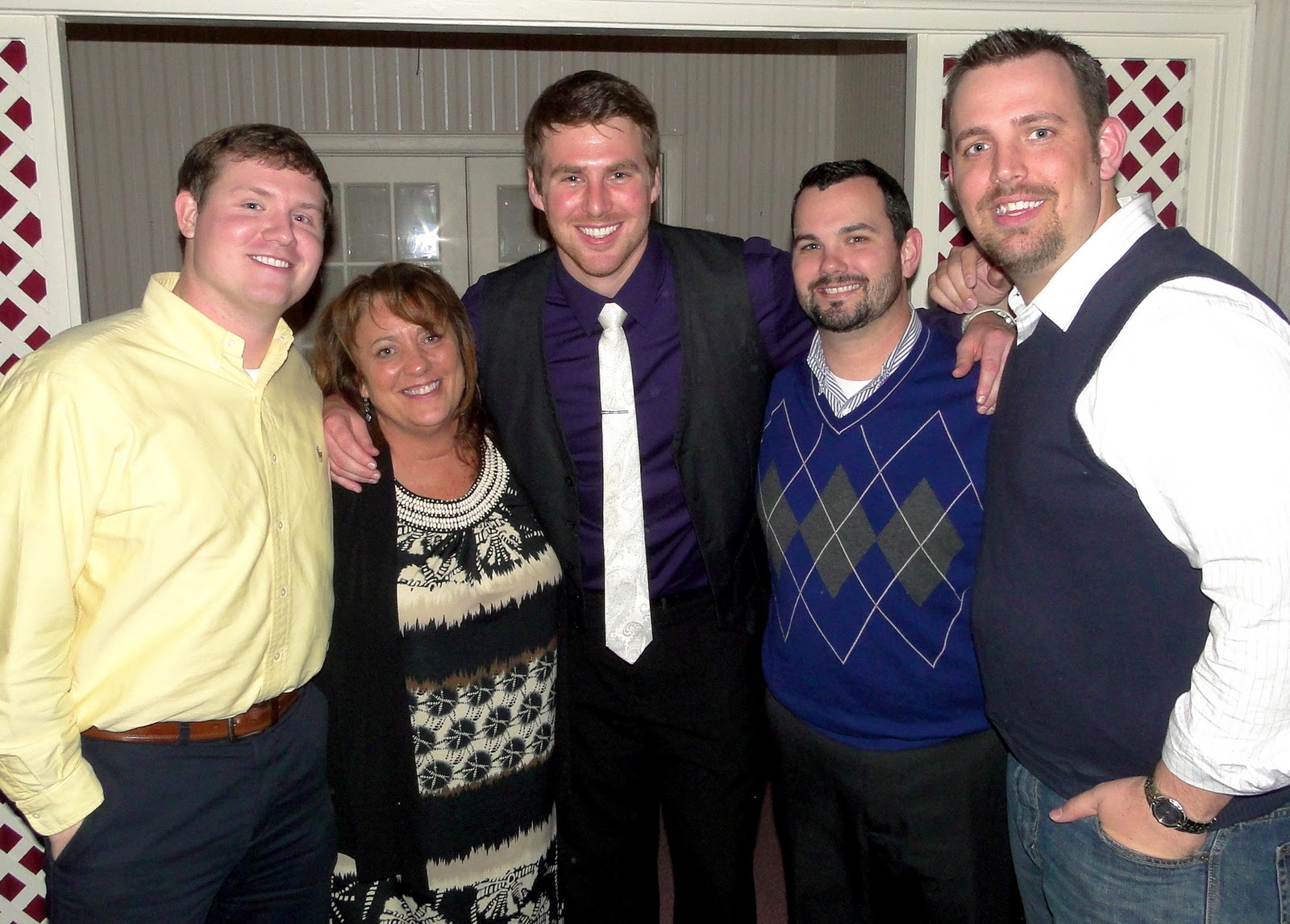 Mr. Rusty and Zach are similar in their management styles (shocker). They are BOTH very giving and believe in rewarding people who work hard. Mr. Rusty gave out prize envelopes to his top agents in the district (for those of you that are confused…Zach is his team’s immediate manager then Rusty is over Zach as well as all of Zach’s people).

Mom racked up that night! She won cash from Mr. Rusty and from Zach since she was #1 in his CIT for the year!!! SO proud of her!!! 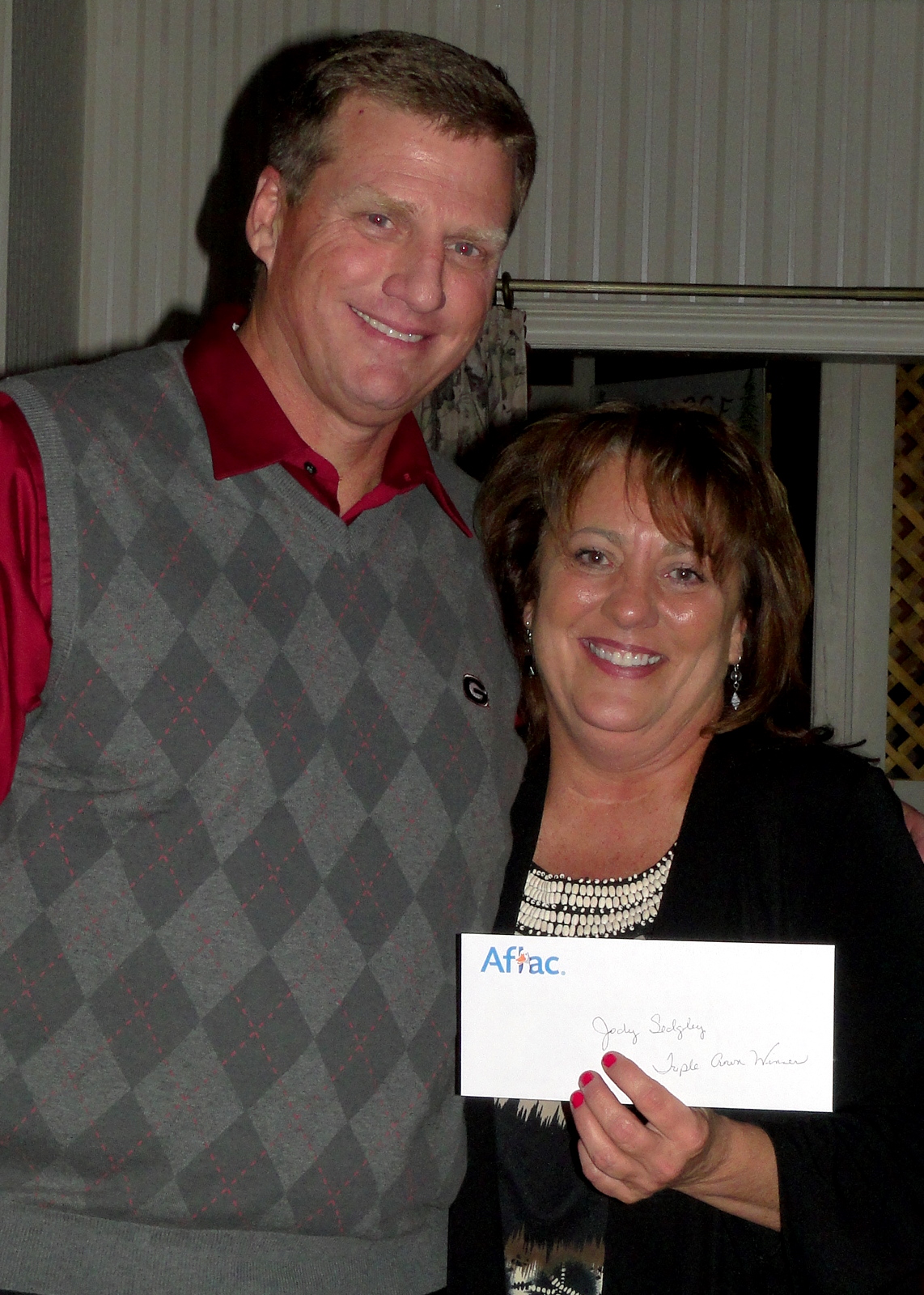 I was BLOWN AWAY by the numbers…a common thing people complain about when starting with Aflac is that all the businesses around here already have it. That is not true!!! Micah was the #1 group opener in the ENTIRE COMPANY for the year and Jason was the #2 group opener. Out of over 60,000 agents!!! We live in rural south Georgia and they opened more accounts than people who live in big cities! It was AWESOME to hear and such a testament to Mr. Rusty at his great leadership. I hope Zach can build up a team as amazing as Mr. Rusty has!!! 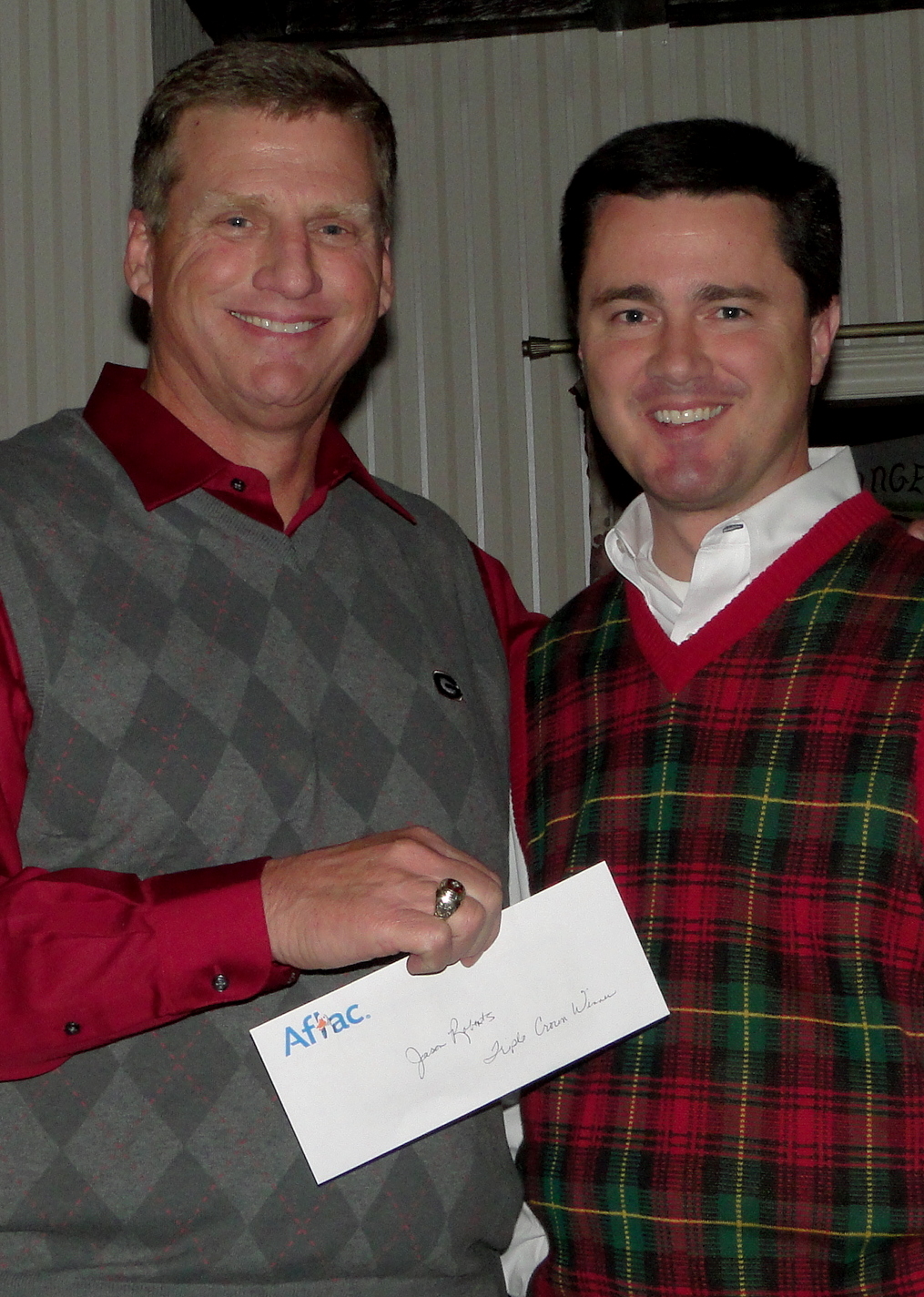 Matt was the #3 group opener in our district, great for his first year especially! 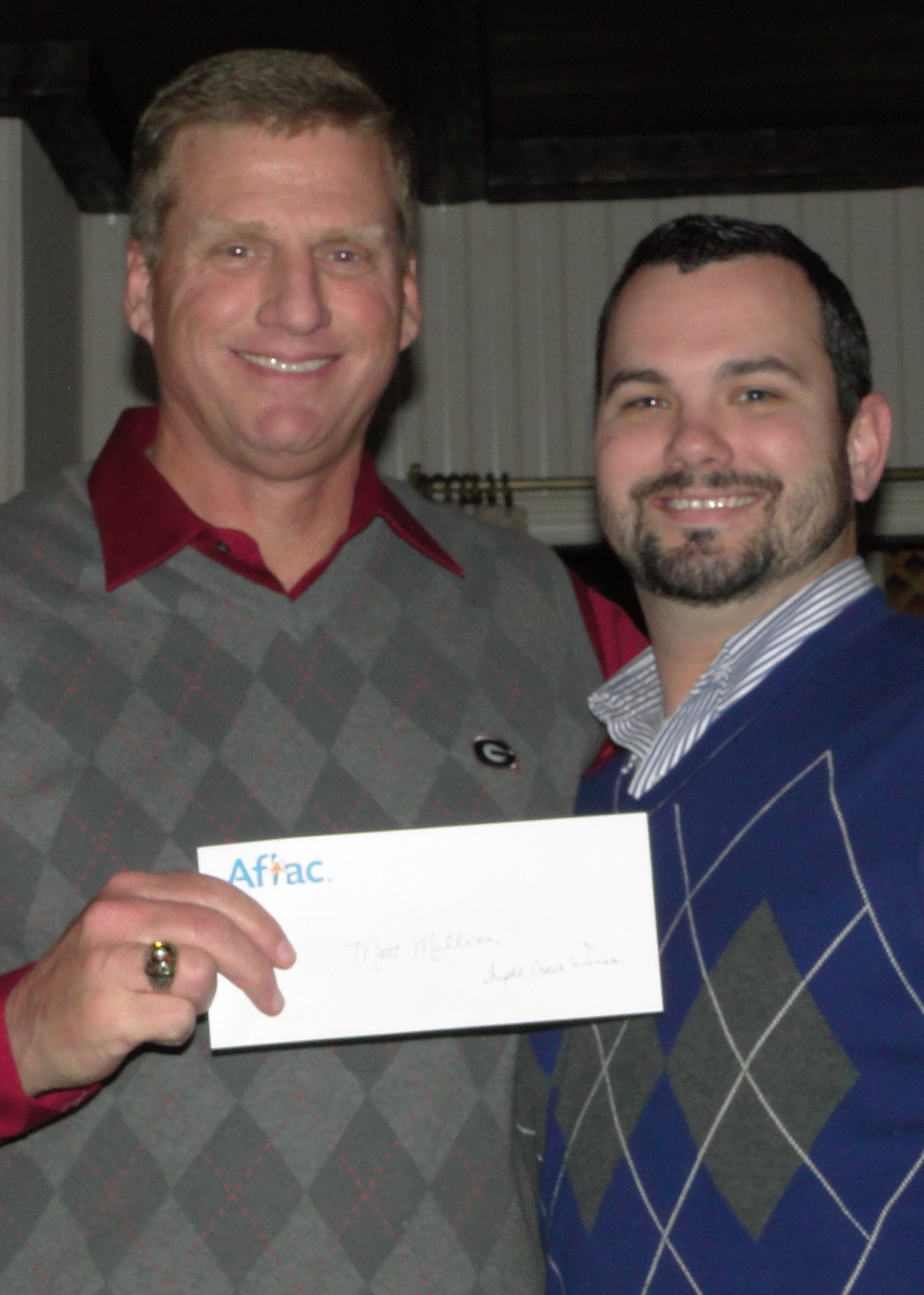 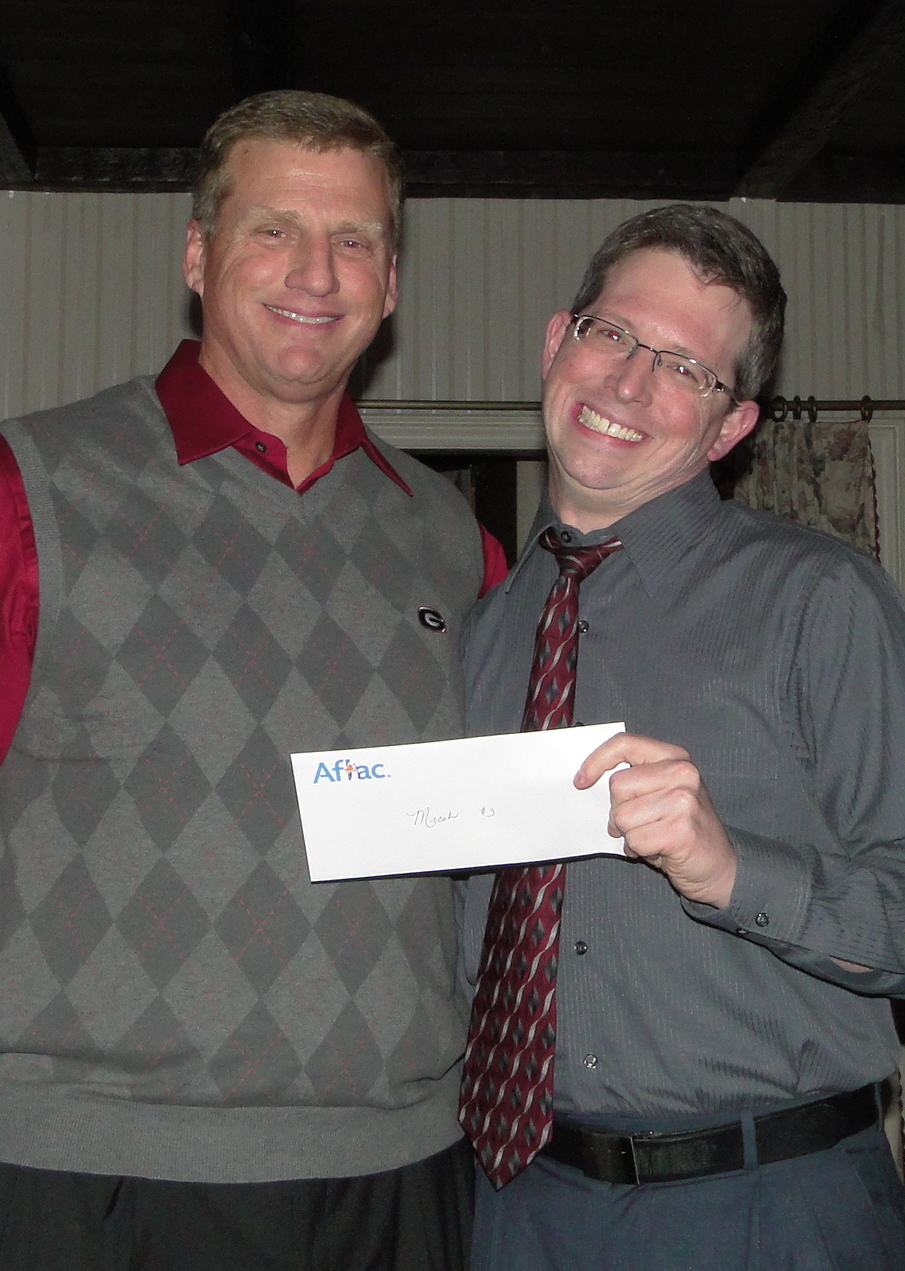 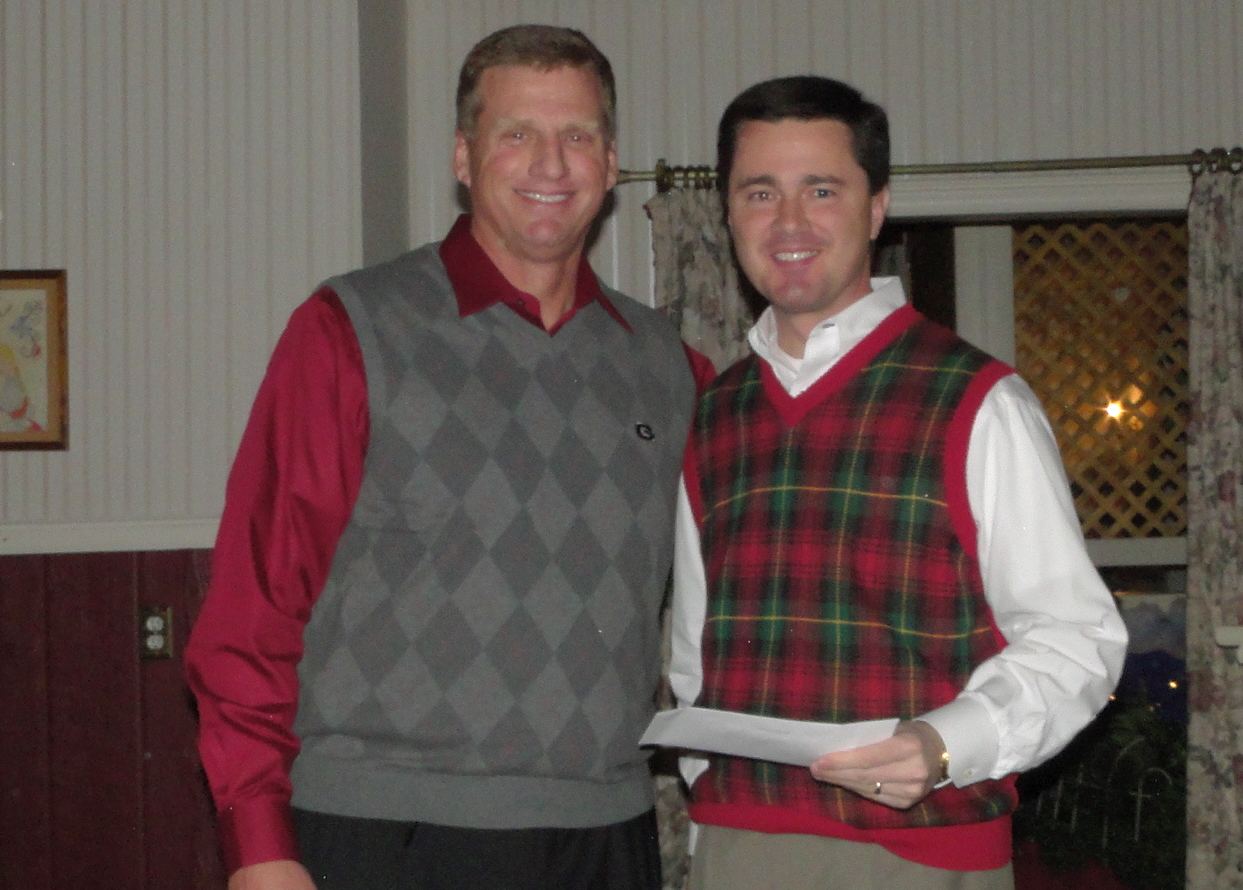 Zach was the #1 agent in Mr. Rusty’s district. Excited about his prize money…adding it to our Italy fund! 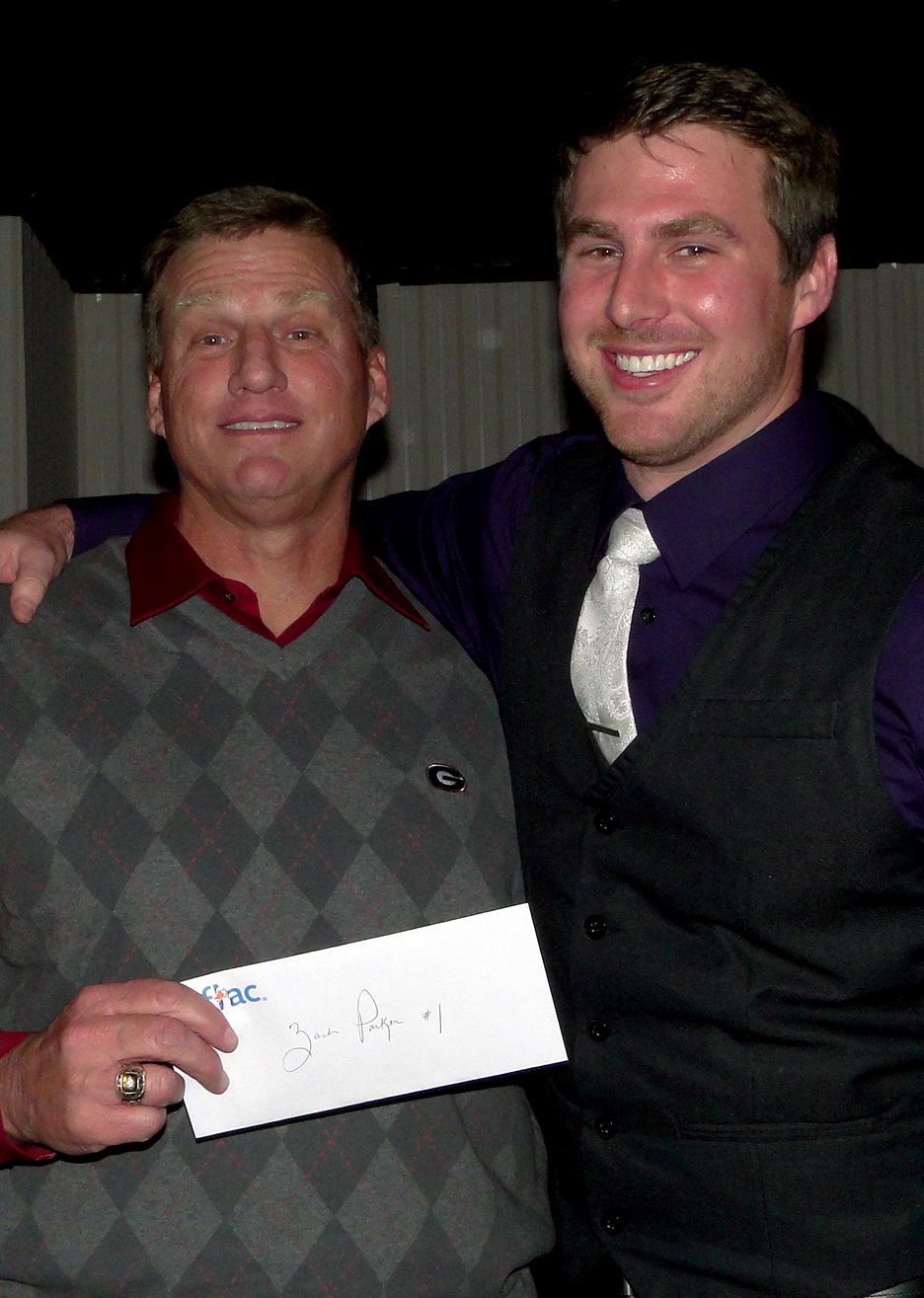 Mrs. Charlotte and Mr. Rusty…amazing hosts of the night! 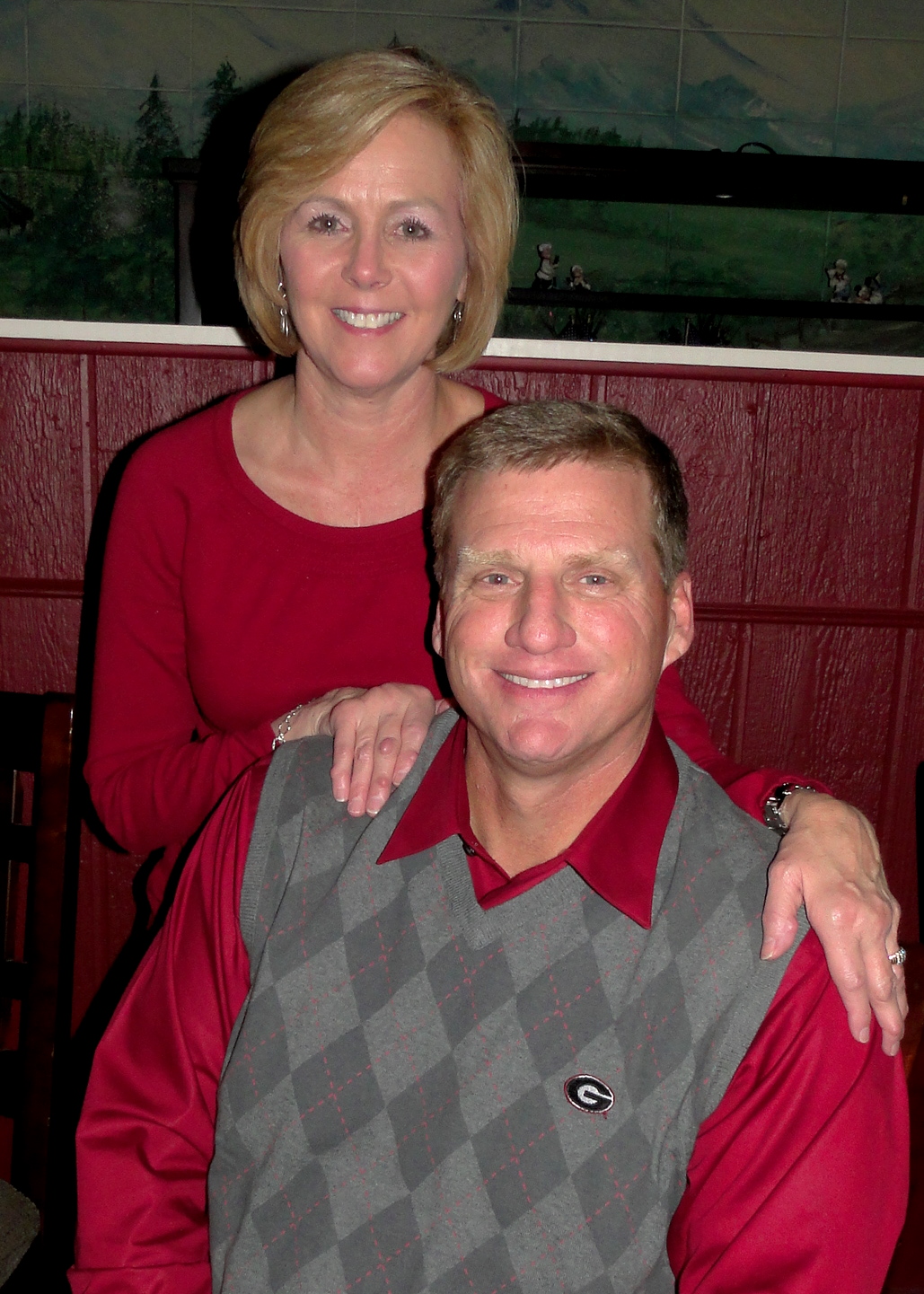 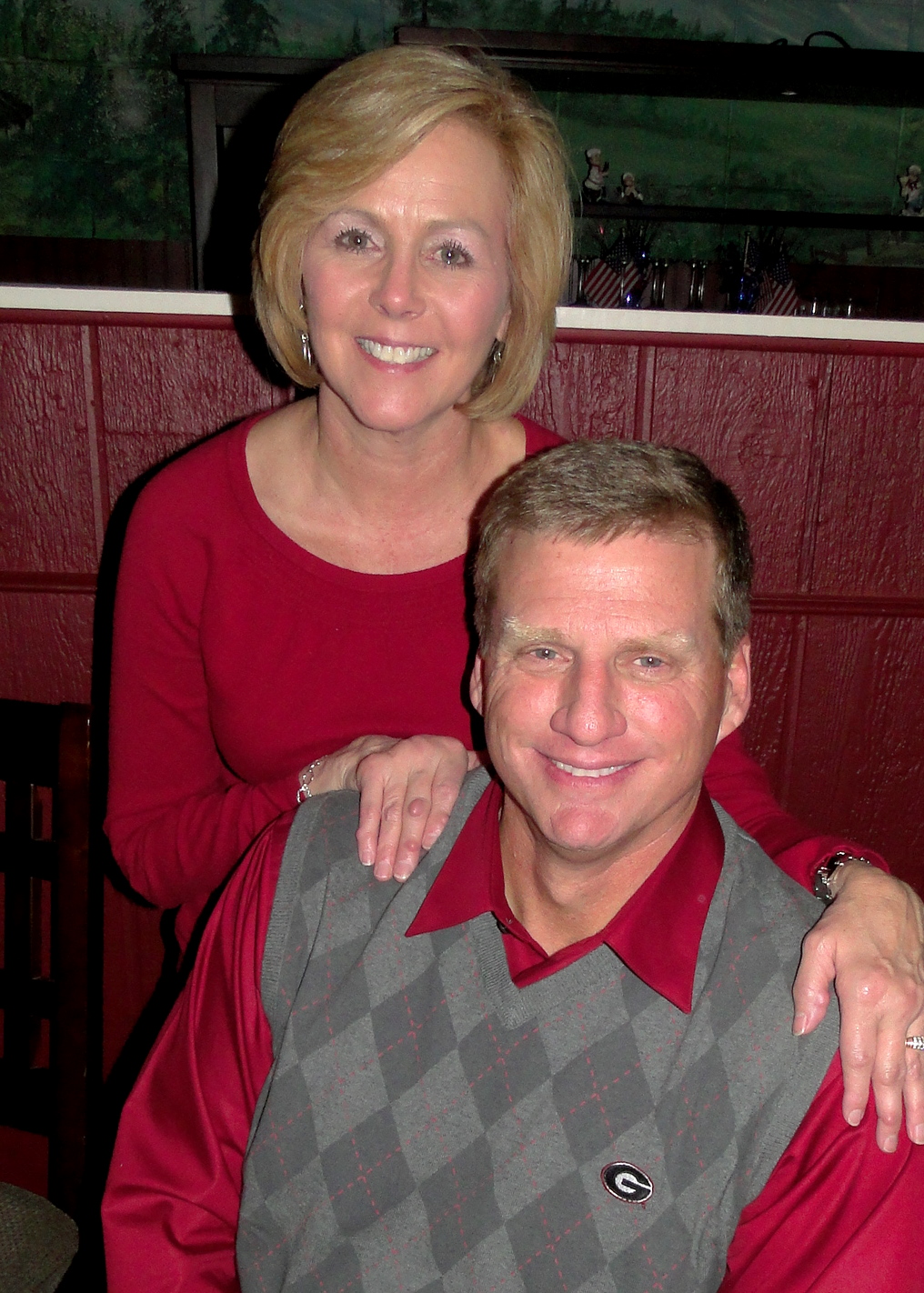 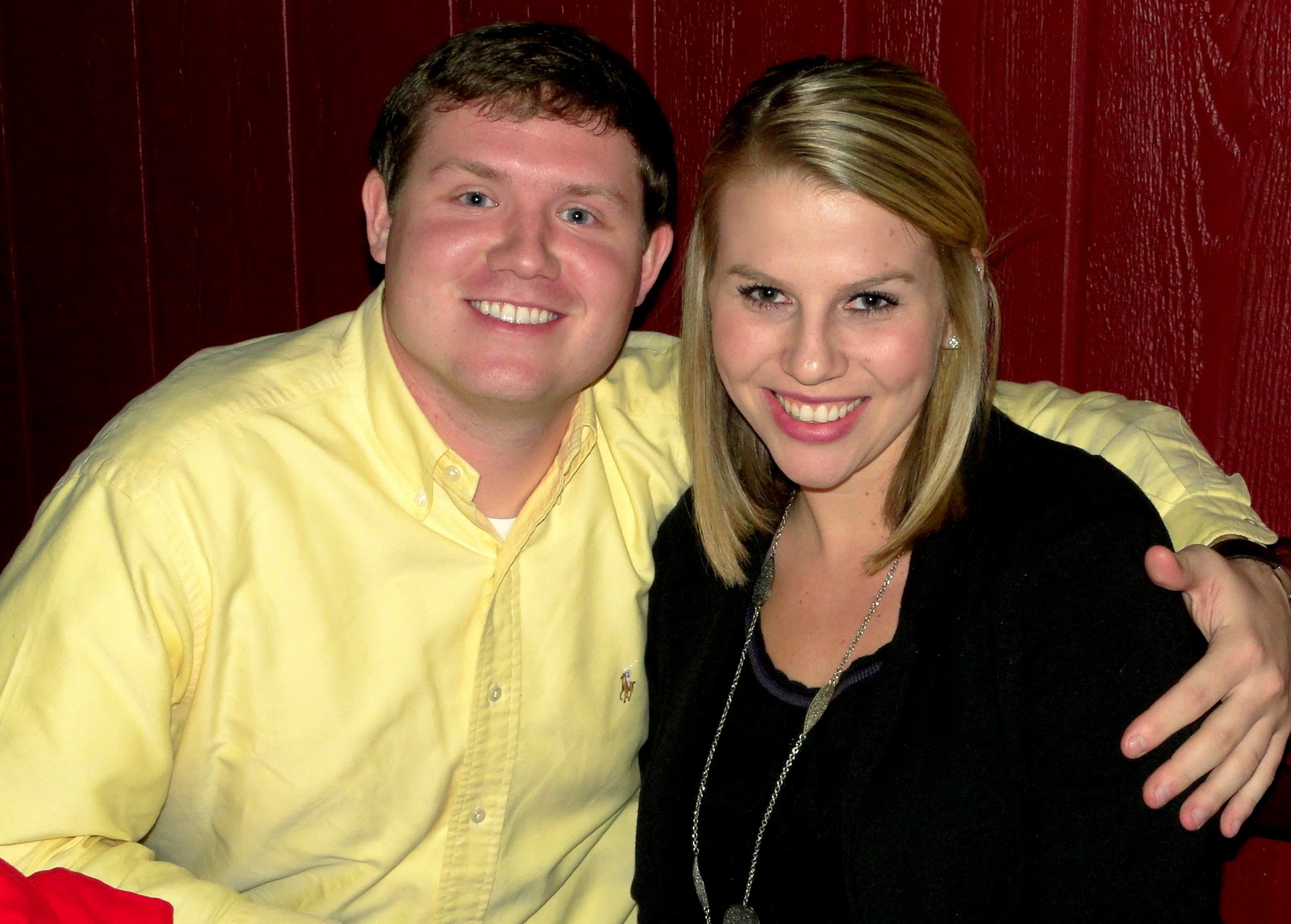 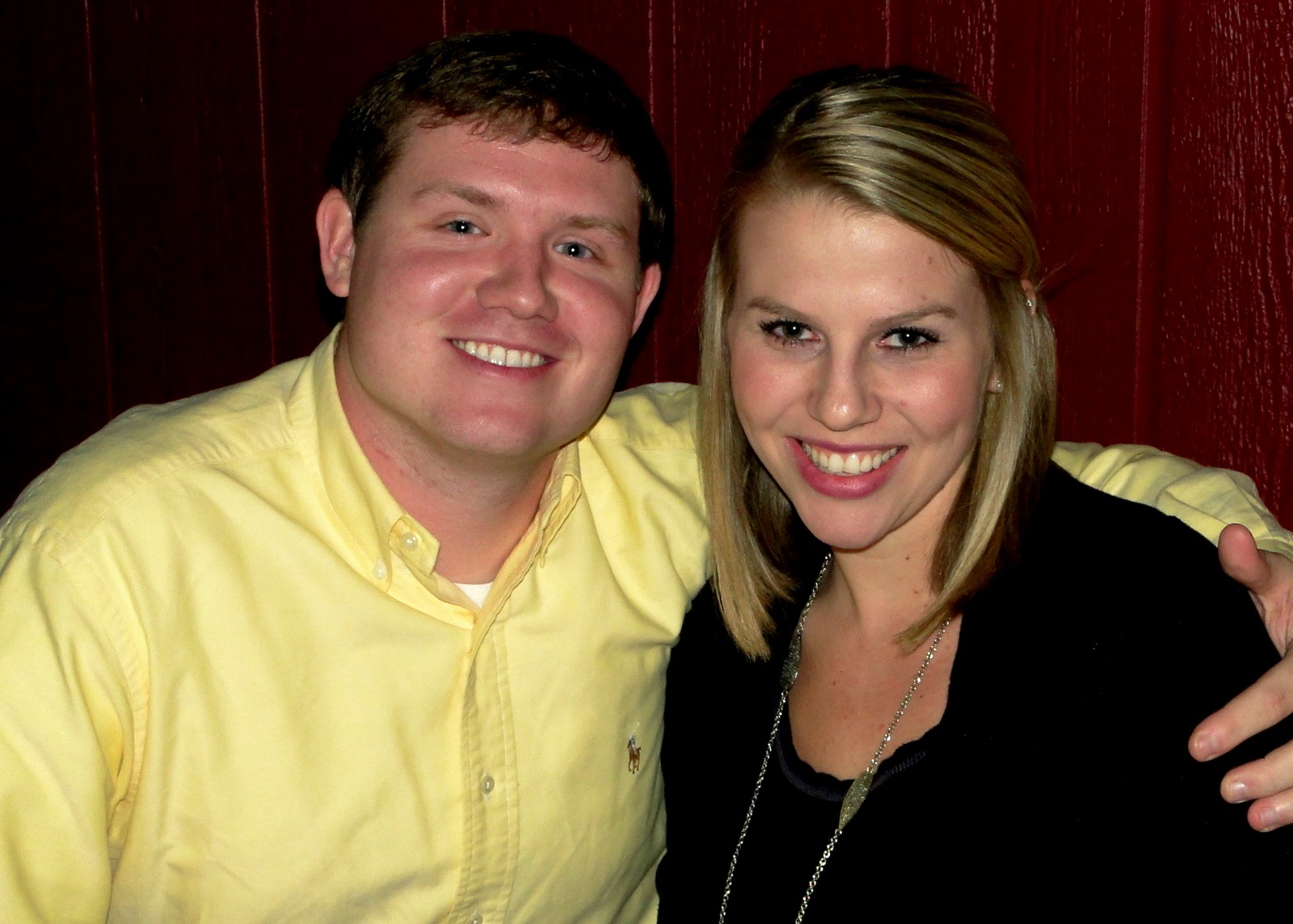 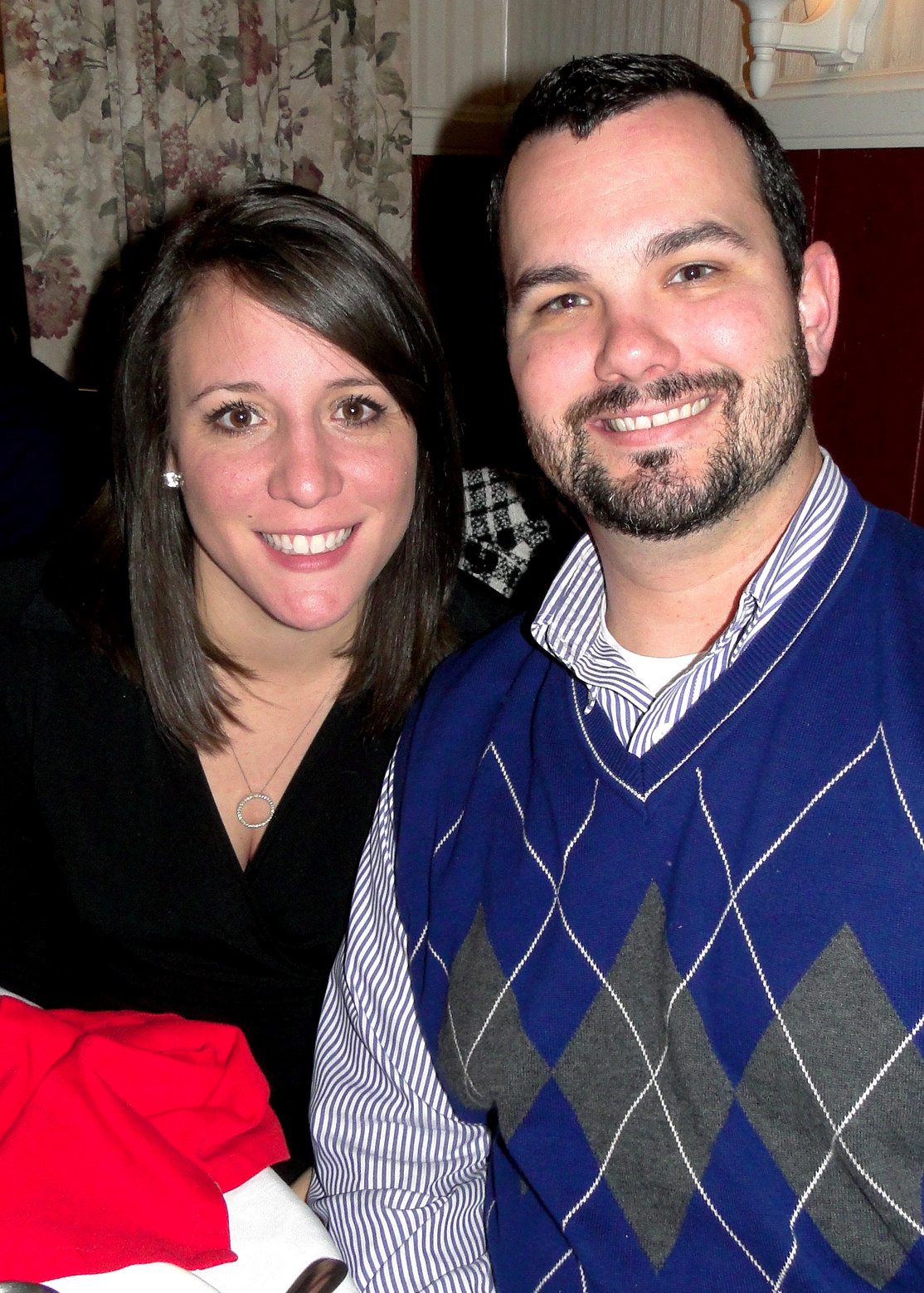 While everyone enjoyed the food, prizes, and hearing a recap of the AMAZING year 2011 was for our district, Brittlynn was really the star of the show 😉 Timing worked out great because I nursed her before we left then we just let people hold her and enjoy her during that nap. It is the evening nap which, at the time, she was barely sleeping for anyway. Everyone got a chance to love on her and then she did nod off and Mrs. Charlotte stuck her in the car seat then we fed her a bottle before we headed home! I was SO proud of how sweet she was the whole time. She never cried once!!!

Getting ready to have a new baby of her own in July! 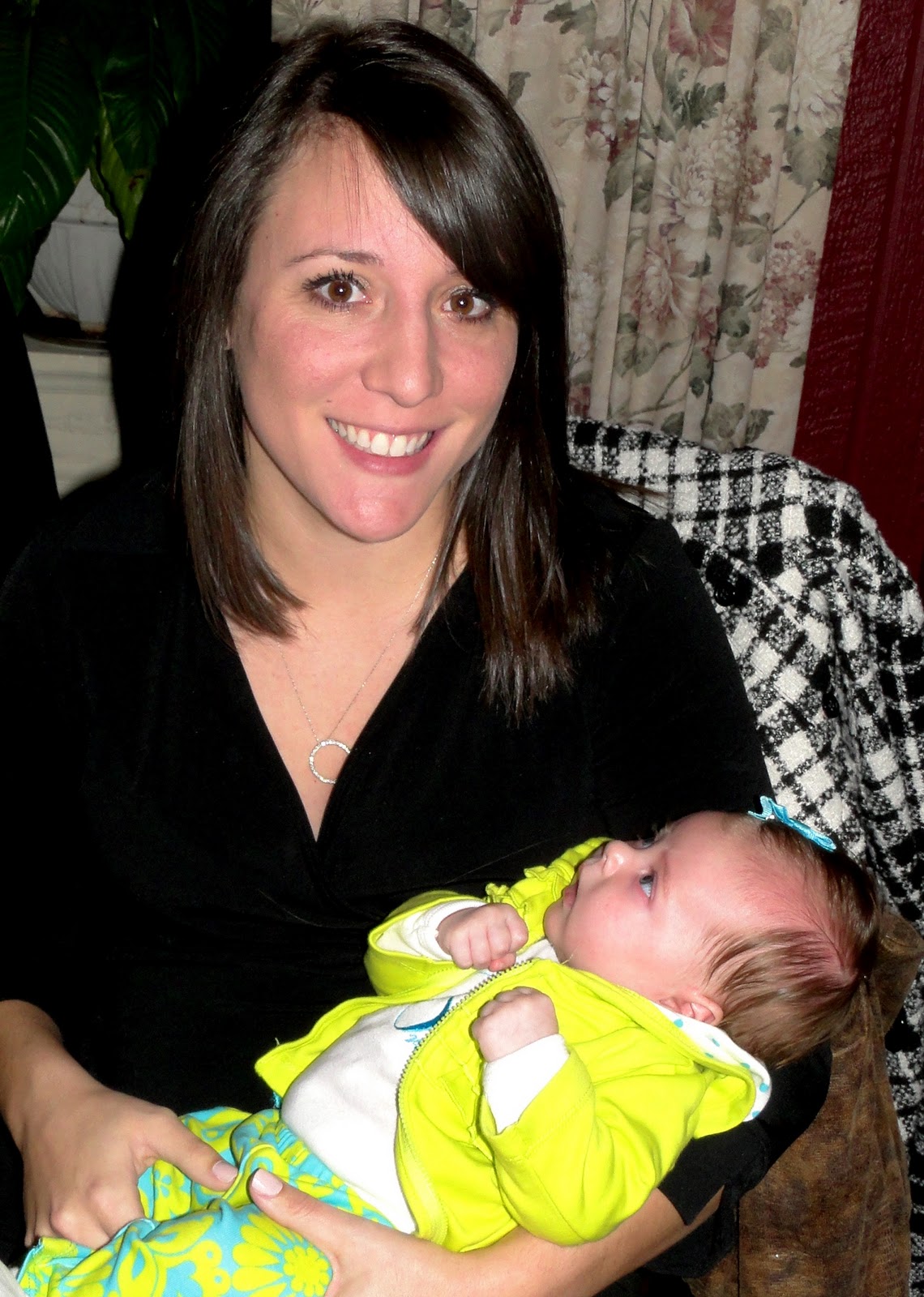 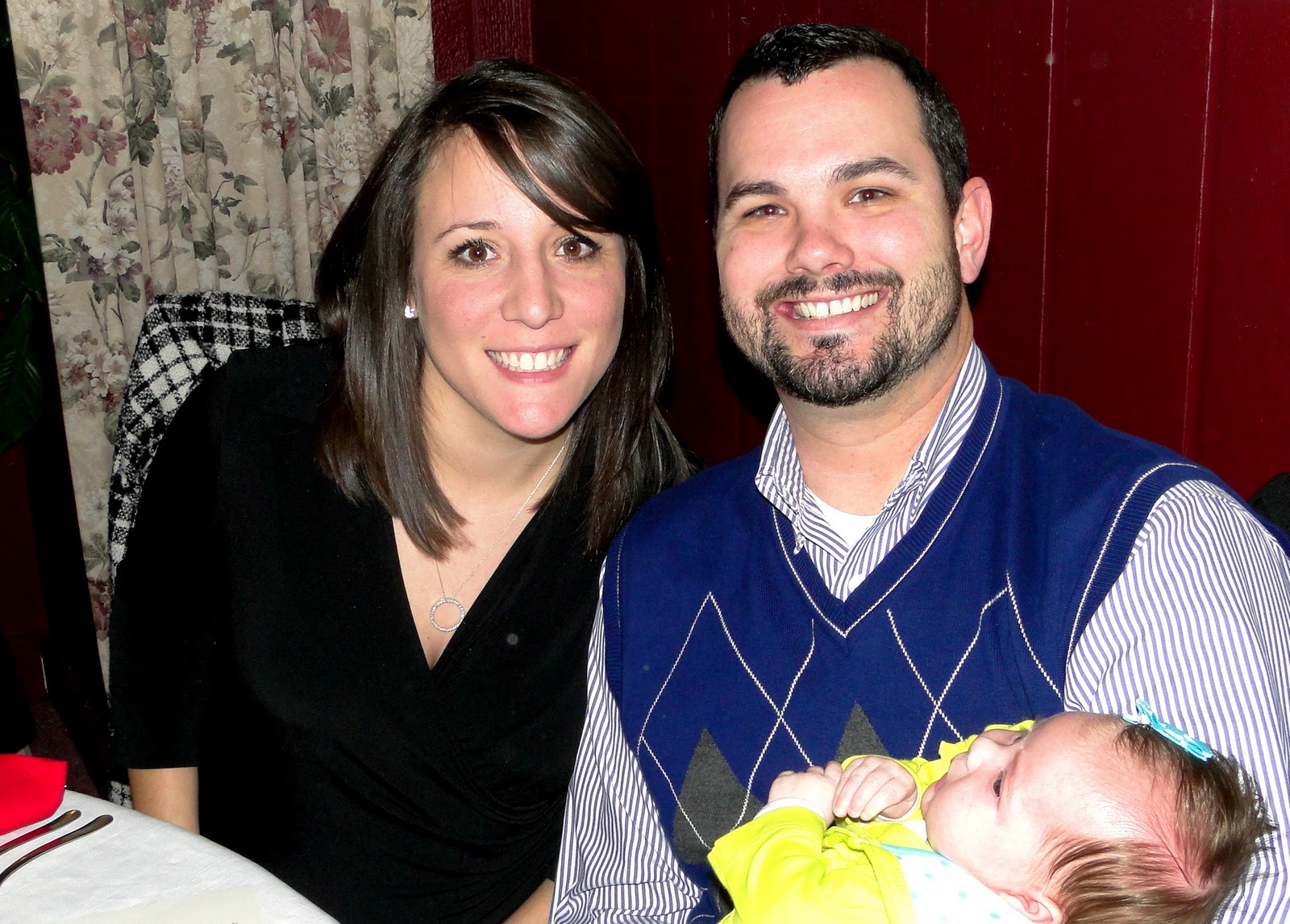 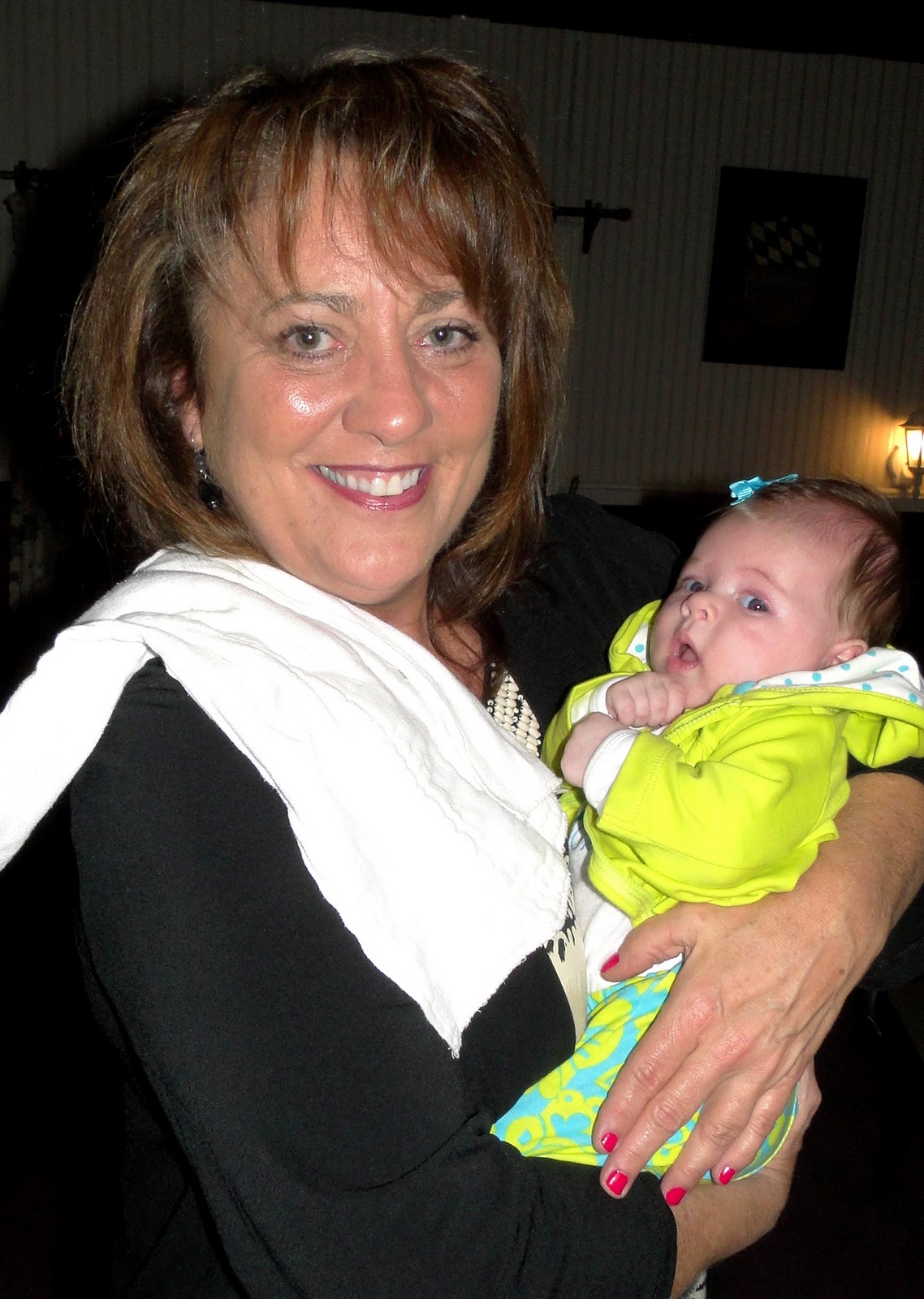 Casey is SUCH a wonderful aunt to both of my children! 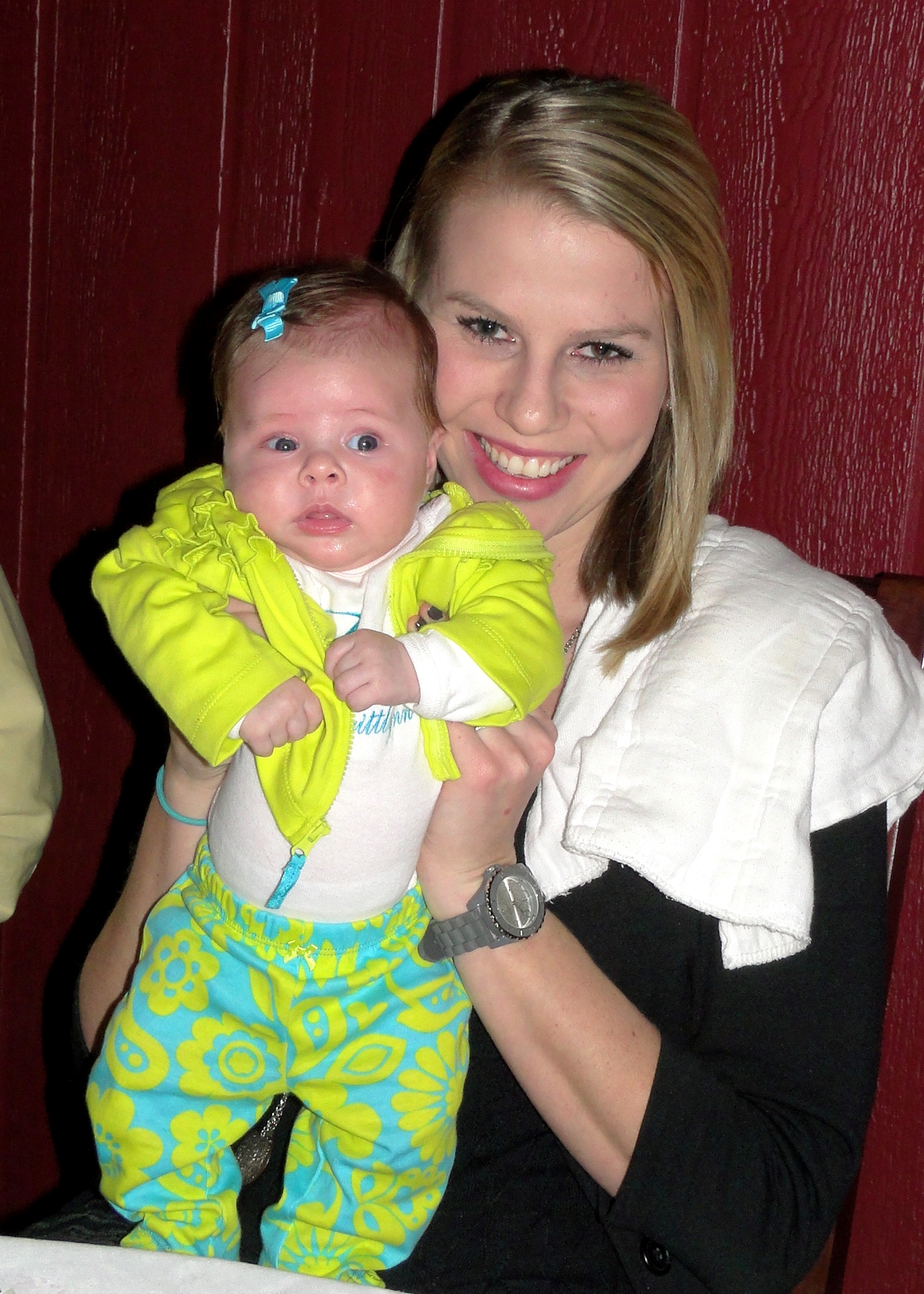 Mr. Rusty was beyond sweet to let her come with us, I really appreciated being able to be there 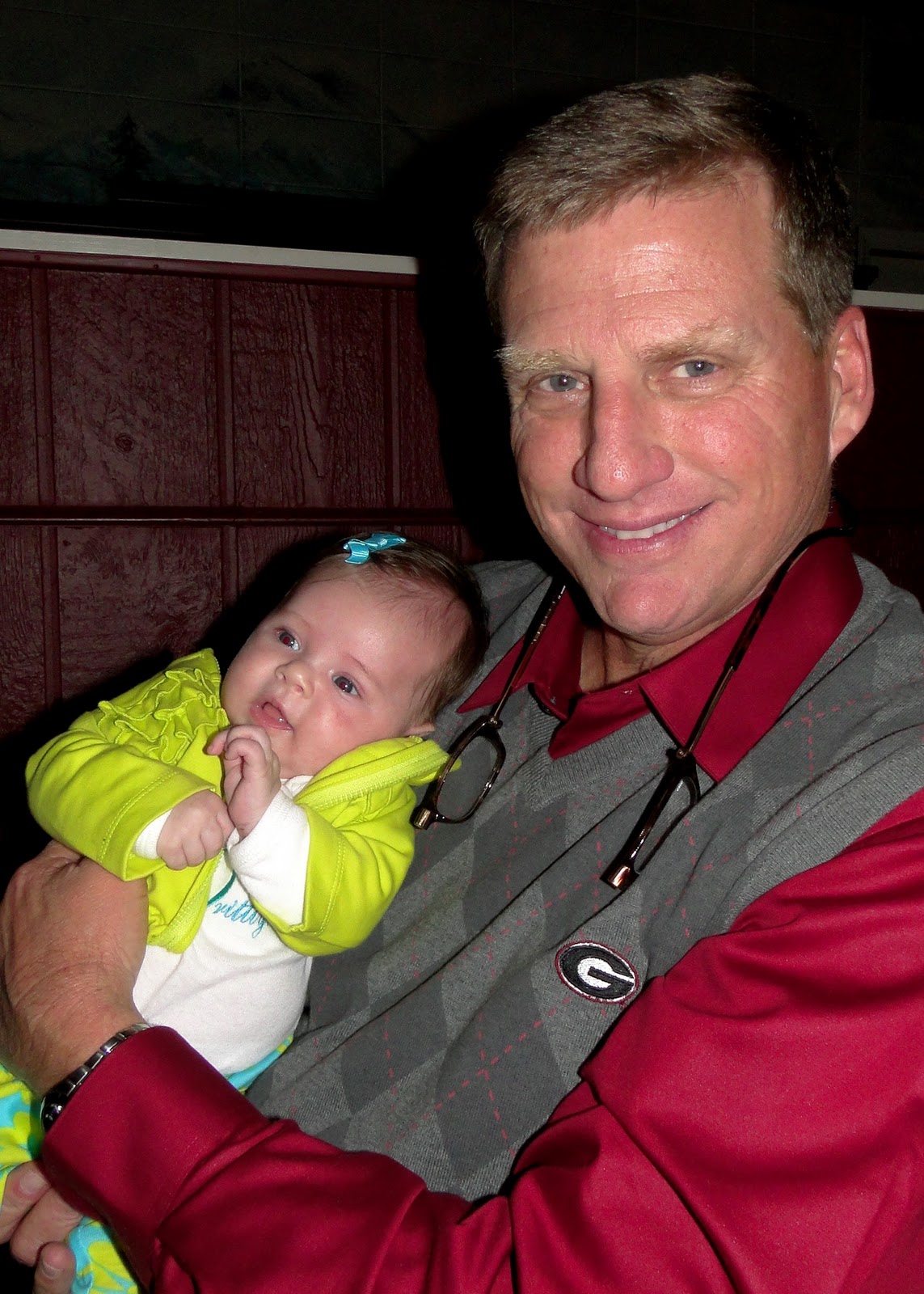 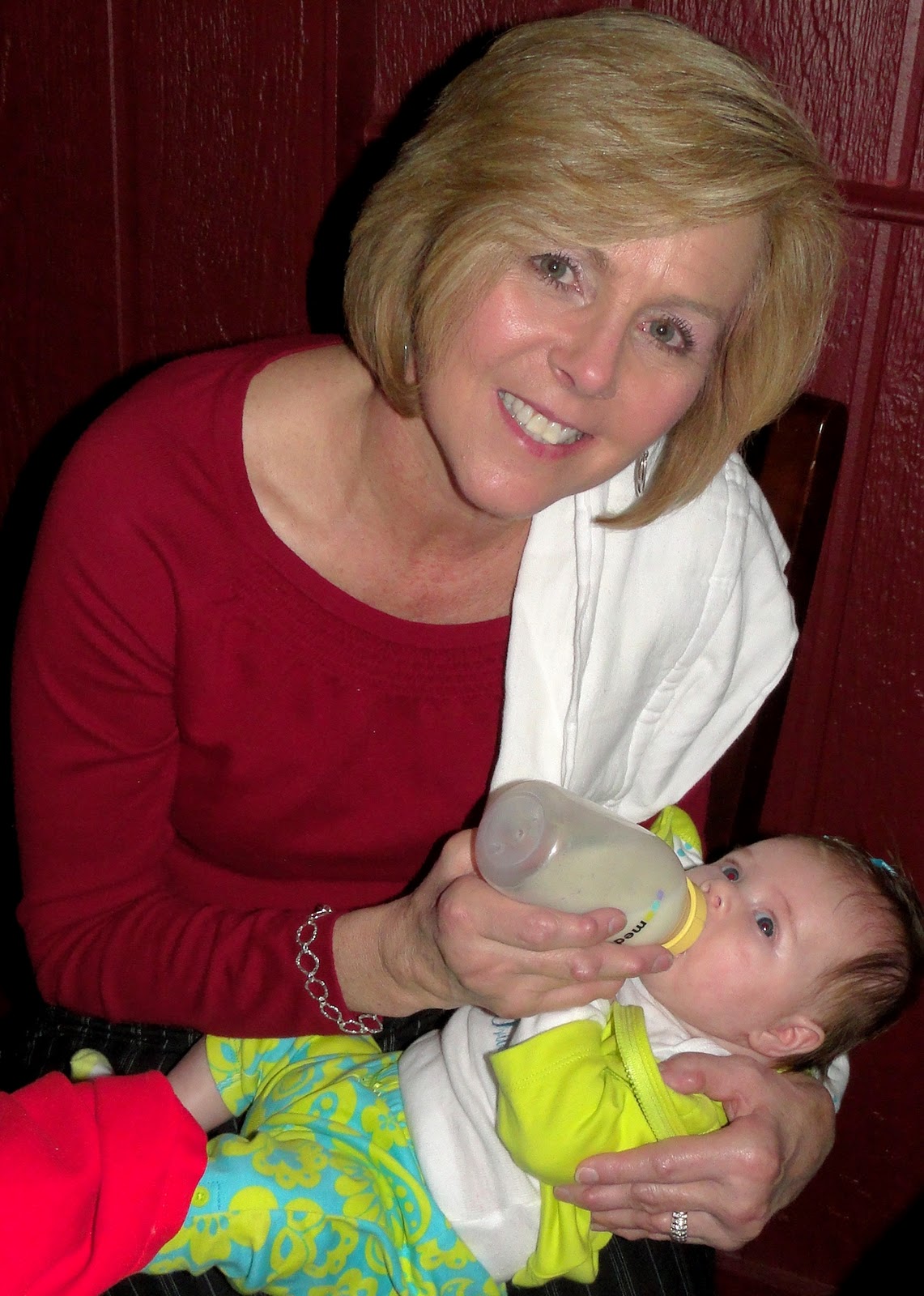 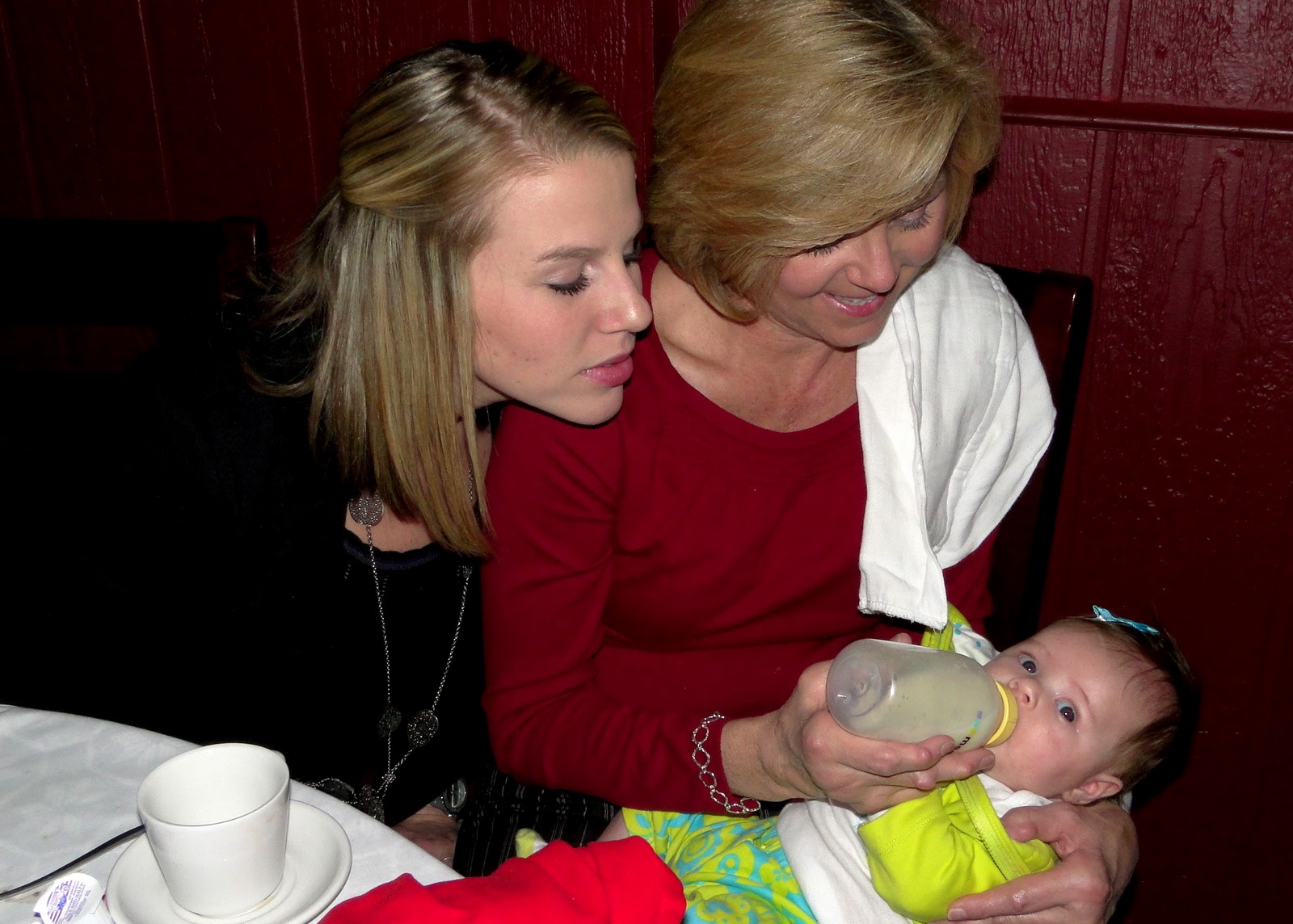 It felt SO GOOD to get dressed up cute and ENJOY a night out. Yes, we still had one kid with us but really I kinda forgot she was there because everyone else was holding her the whole night!!! I loved going table to table talking to everyone and visiting. It was such a fun night and I’m so impressed with the amazing things that happened for everyone with Aflac last year. I know 2011 will be hard to beat, but I believe in Zach (and Mom and Mr. Rusty and everyone else!) and KNOW they can do it!!! Wouldn’t it be great if Zach could continue to build his team and re-claim his #1 spot in the state?!?! 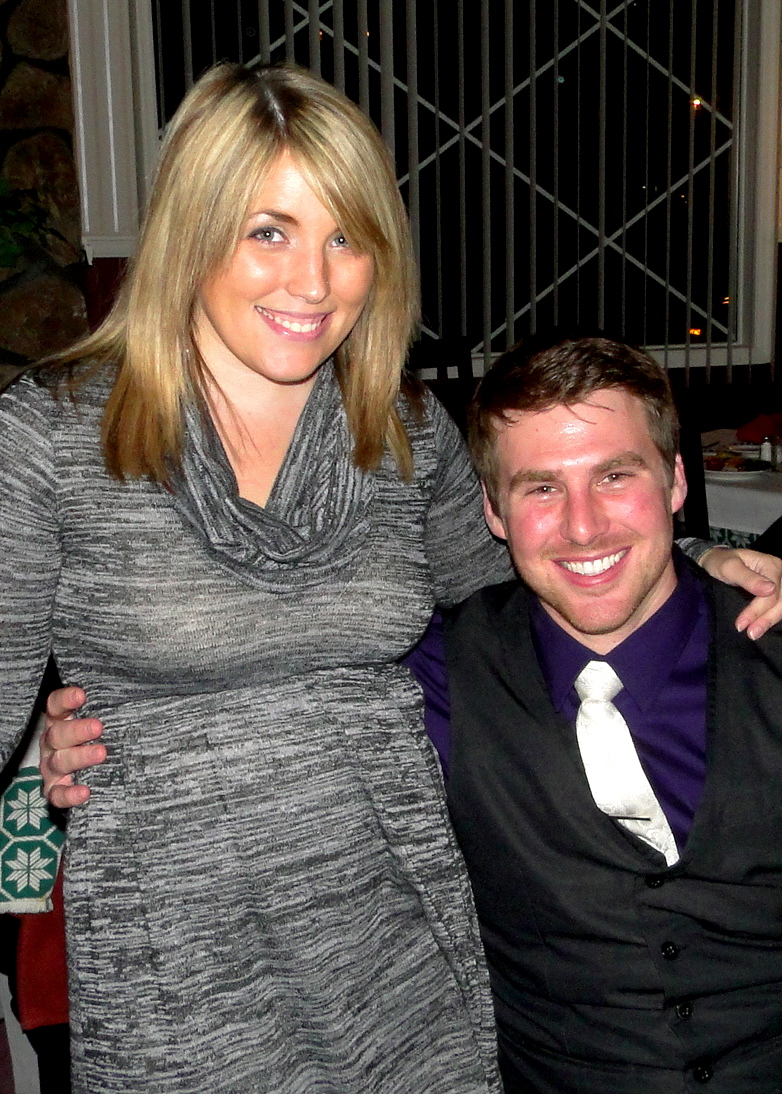 As you can tell, I’m so thankful that Zach works for such an amazing company. If any of you are looking for a career change Zach is hiring and would love to talk to you about potentially joining his team! I’m super pumped for Brandi and think she’ll rock out this year!

We got home before 9:00 and had a pretty good report from the babysitters. I felt SO awkward being a “mom.” I mean, I know I AM a mom but it seriously doesn’t feel like I’m old enough to be hiring baby sitters. I babysat all the time in college and loved it but it’s hard to picture myself on the parental end of things. I’m sure both the girls left thinking that Zach and I were idiots. We blabbered on wayyy too much and just didn’t know what to say or do. I guess I’ll learn with time how to handle all of that kind of thing!