We live close to a really nice golf course where they hold a pretty legit golf tournament each year. Zach has lived here his entire life but has never been to the tournament…or ANY golf tournament before! I didn’t even know that until my sweet friend, Kayla, offered us a couple of tickets for the event! It was SO super nice of her and Zach was THRILLED!!! His dad ended up getting tickets as well and they took Kye out there with them!

The event was on Saturday April 27th which also happened to be the same day as our annual neighborhood yard sale. We did not participate in the sale. I grew up with my mom having garage sales all the time but Zach cannot STAND them. He’d rather give our stuff away to family and friends and then just donate to Goodwill and write it off on taxes. I also really enjoy garage sale hunting. Again, more childhood memories 😉 My grandfather LOVED garage sales and would go every Friday and Saturday morning. When we would visit we’d always try to go with him, it was always so fun and I love haggling for bargains. However, we rarely go garage saling now. I just never ever remember to do it? And I have NO CLUE where the good finds are around here! I guess my kid sale obsession fulfills my garage sale needs haha 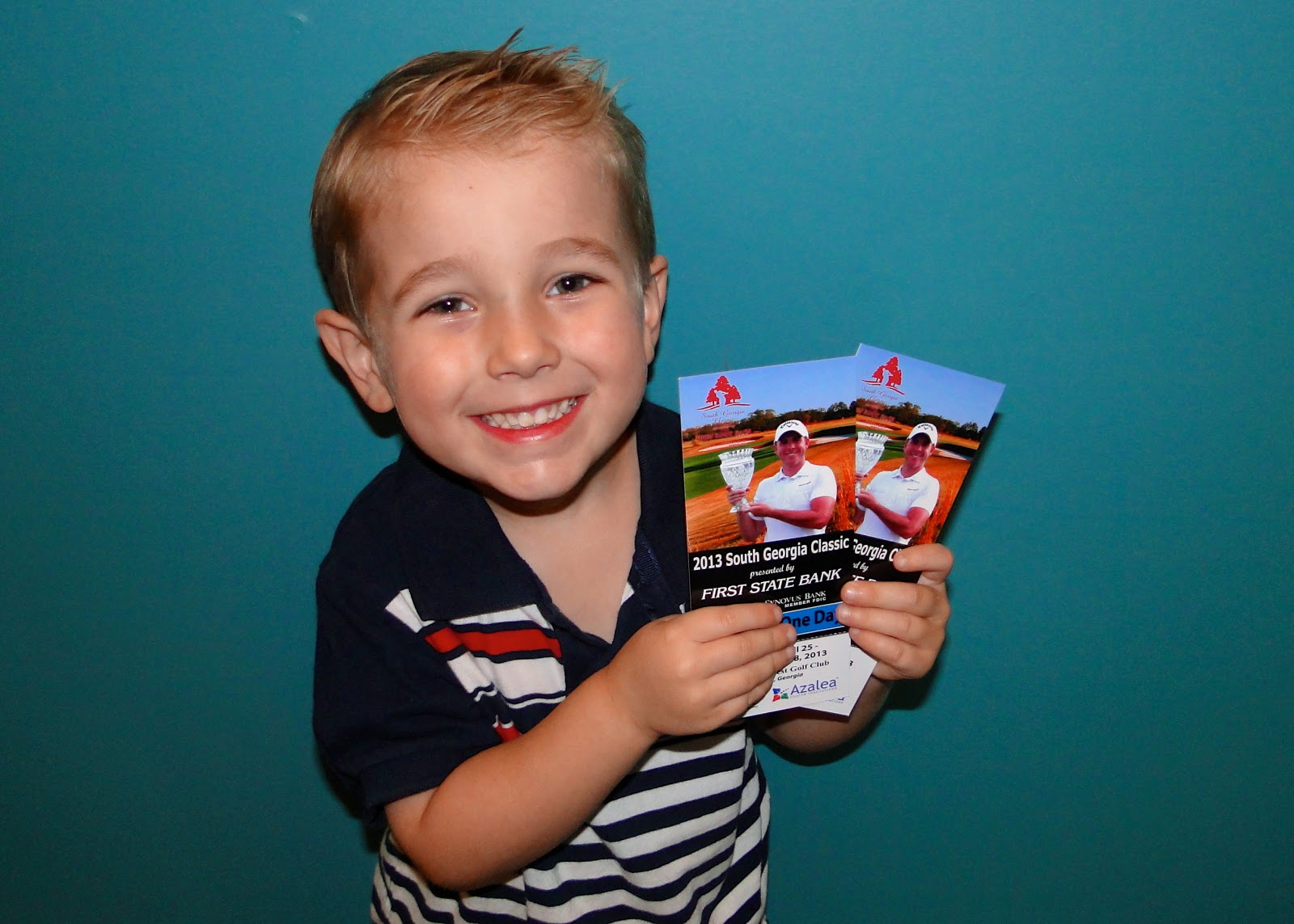 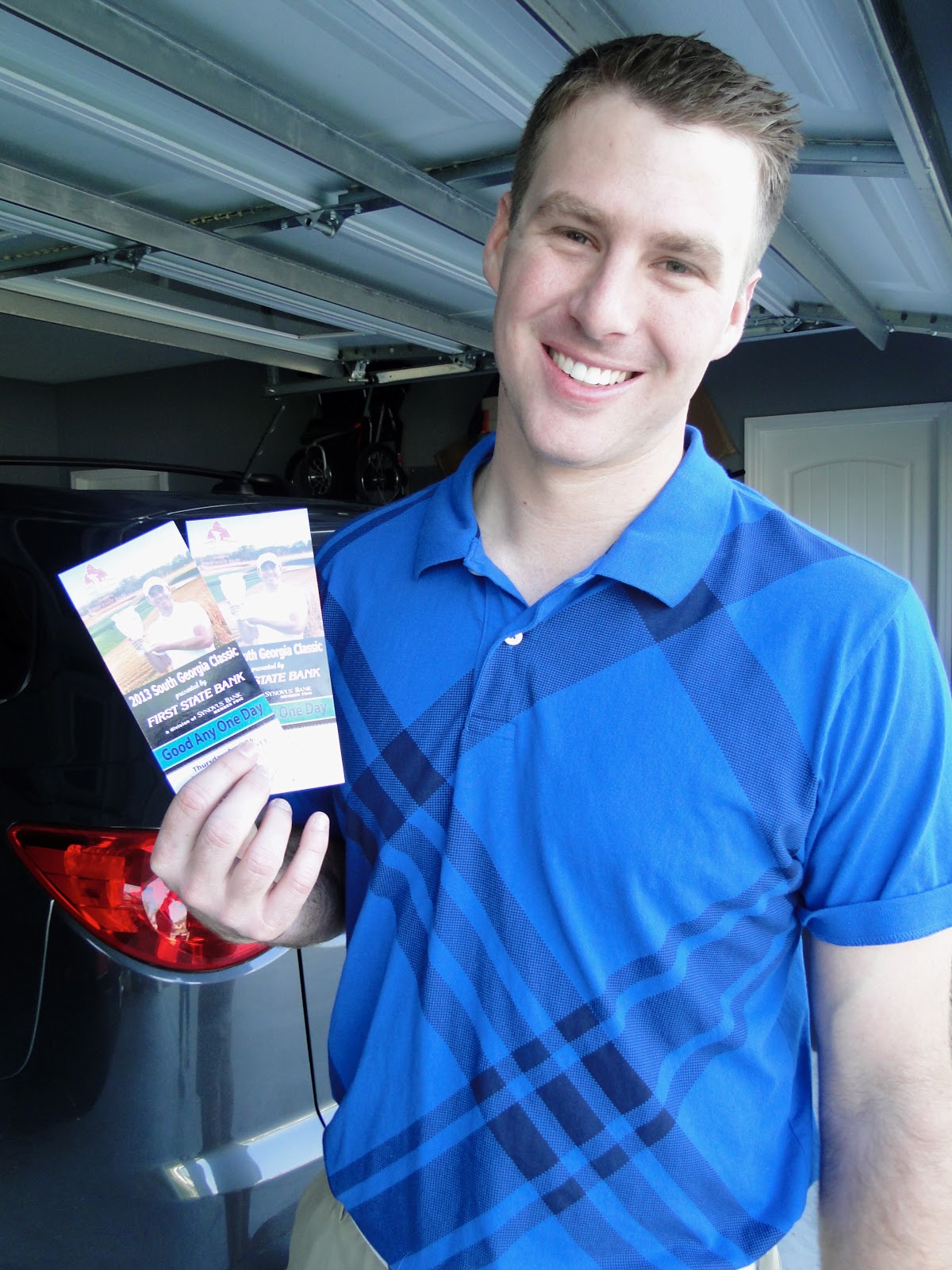 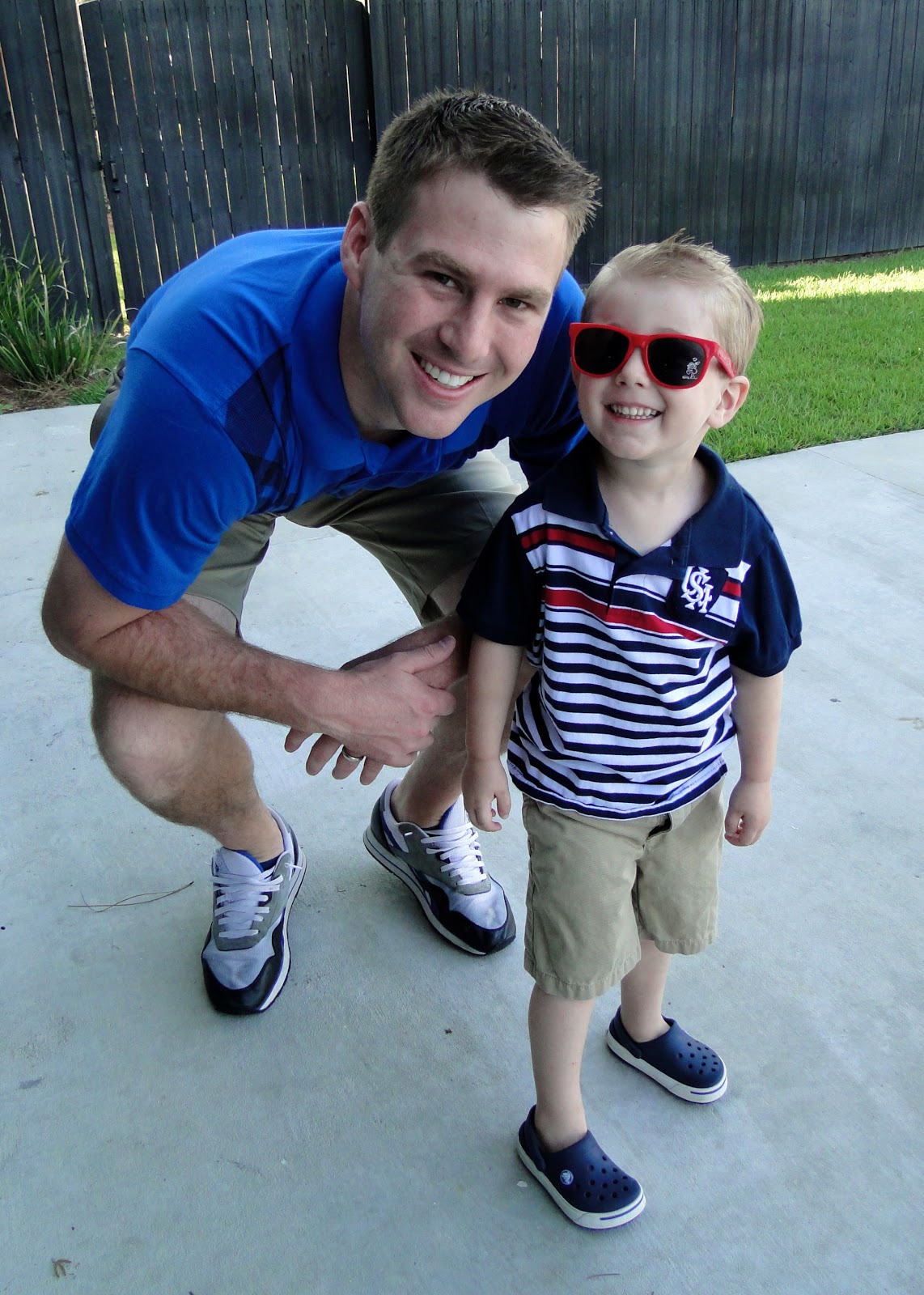 Since the guys were going to the tournament, Britt and I went for a walk around the neighborhood to check out the deals. I spent $3 and got some Ugg style boots for her for this winter! It was beautiful weather and I enjoyed getting to visit with some of our neighbors. We even ran into a family I used to babysit for back in college and it was nice to catch up. I love going “in public” with Britt…she just brings smiles to SO many people! Every one stops and comments on how cute she is and it is so fun 😉 I was also doing the walk as a test-run for my foot and I did okay! We only went for about 45 minutes but it was nice to be semi-active for a change! 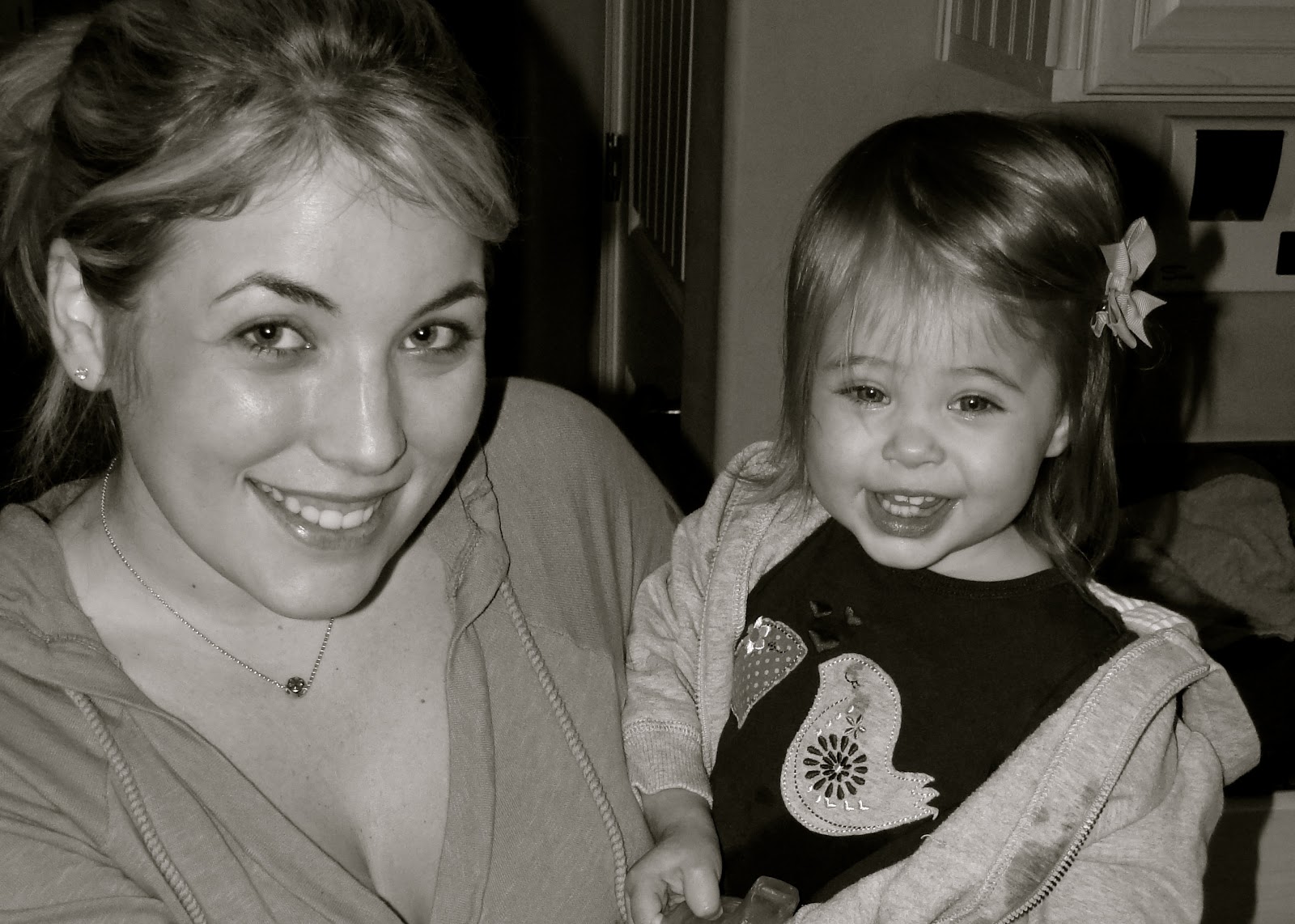 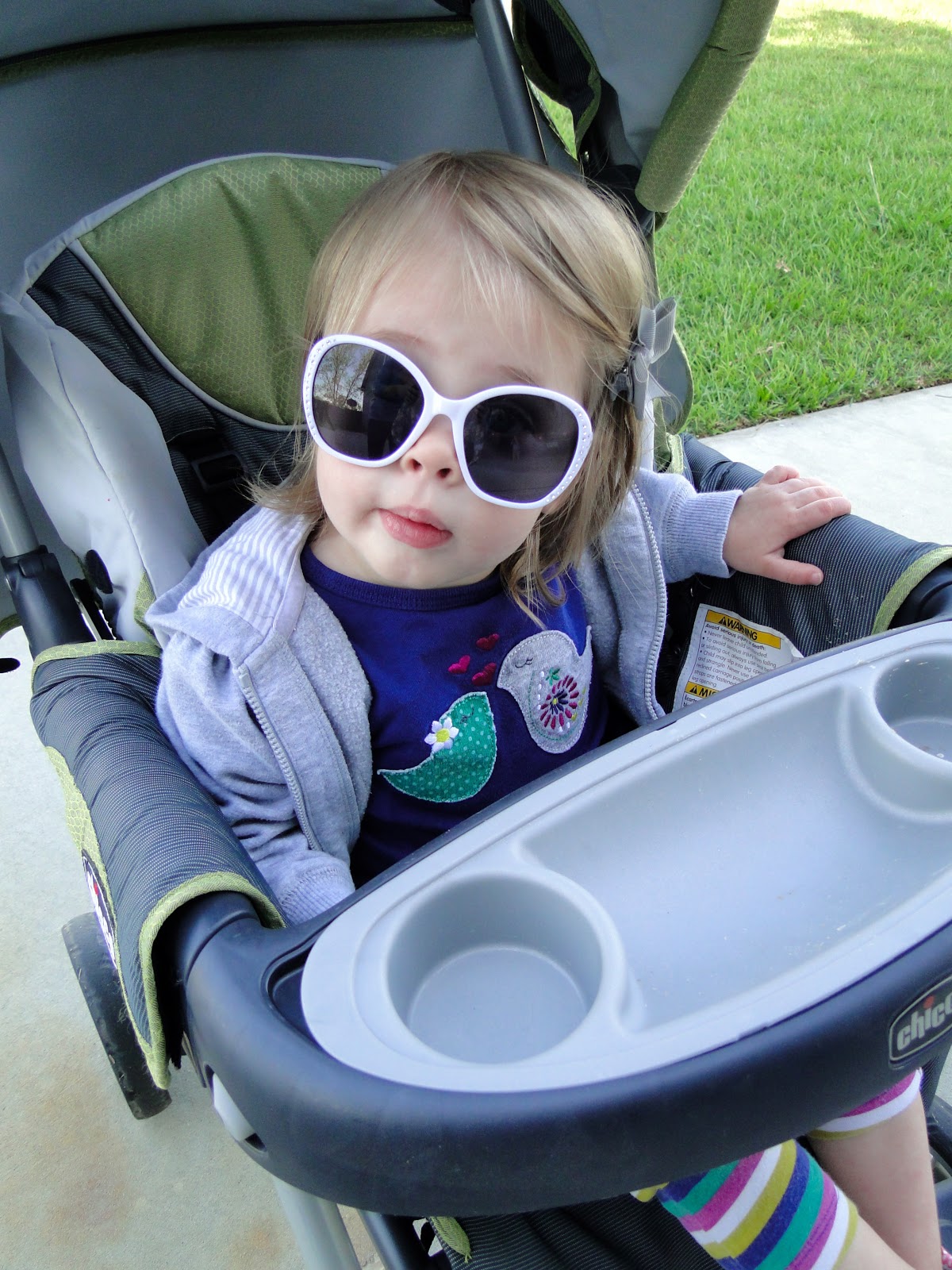 Mr. Rusty sent me this picture and said “The next Jack Nicolas!” They had a little putting area set up and it was a competition…anyone who made the putt won a prize. Zach said HE didn’t even make the putt….but Kye did! On the first try!!! He was SO excited and we were so proud of him! When he got home he showed me his prizes: an Academy Sports book bag and a gift card to their store (for $5). 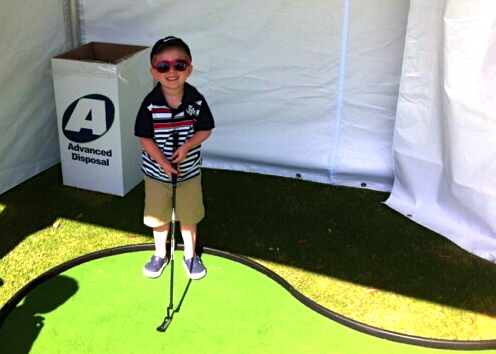 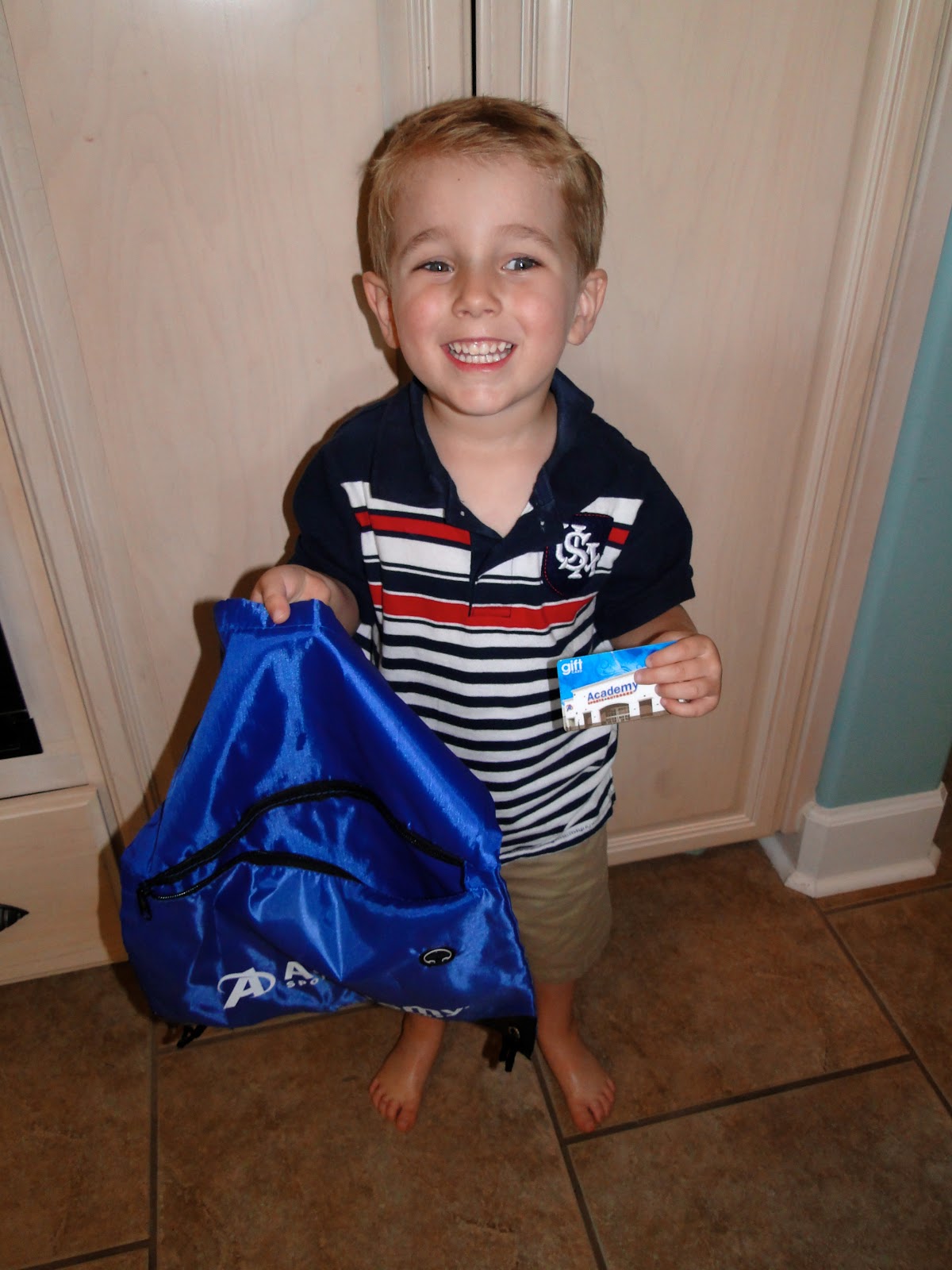 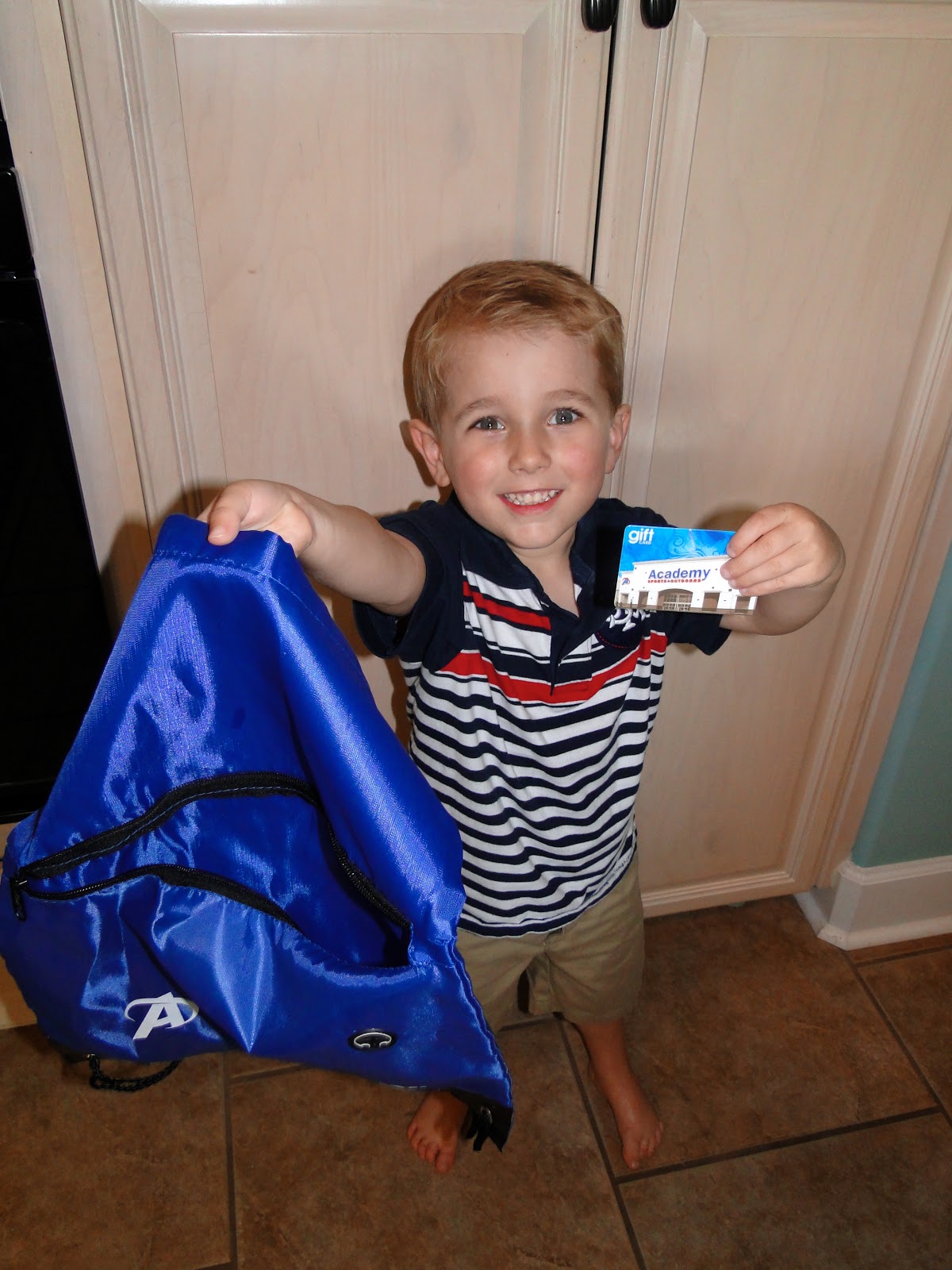 The following week Zach took Kye up to Academy to pick out a prize with his gift card. Zach wanted to spend it on himself but we talked about it and Kye earned that prize and should get to deserve his reward! It’s the first legit competitive thing he’s really ever participated in! He got some helicopter thing (it was a little over the $5) and he’s already hidden it somewhere random so we have no clue where it is haha. But at least he had fun picking it out! 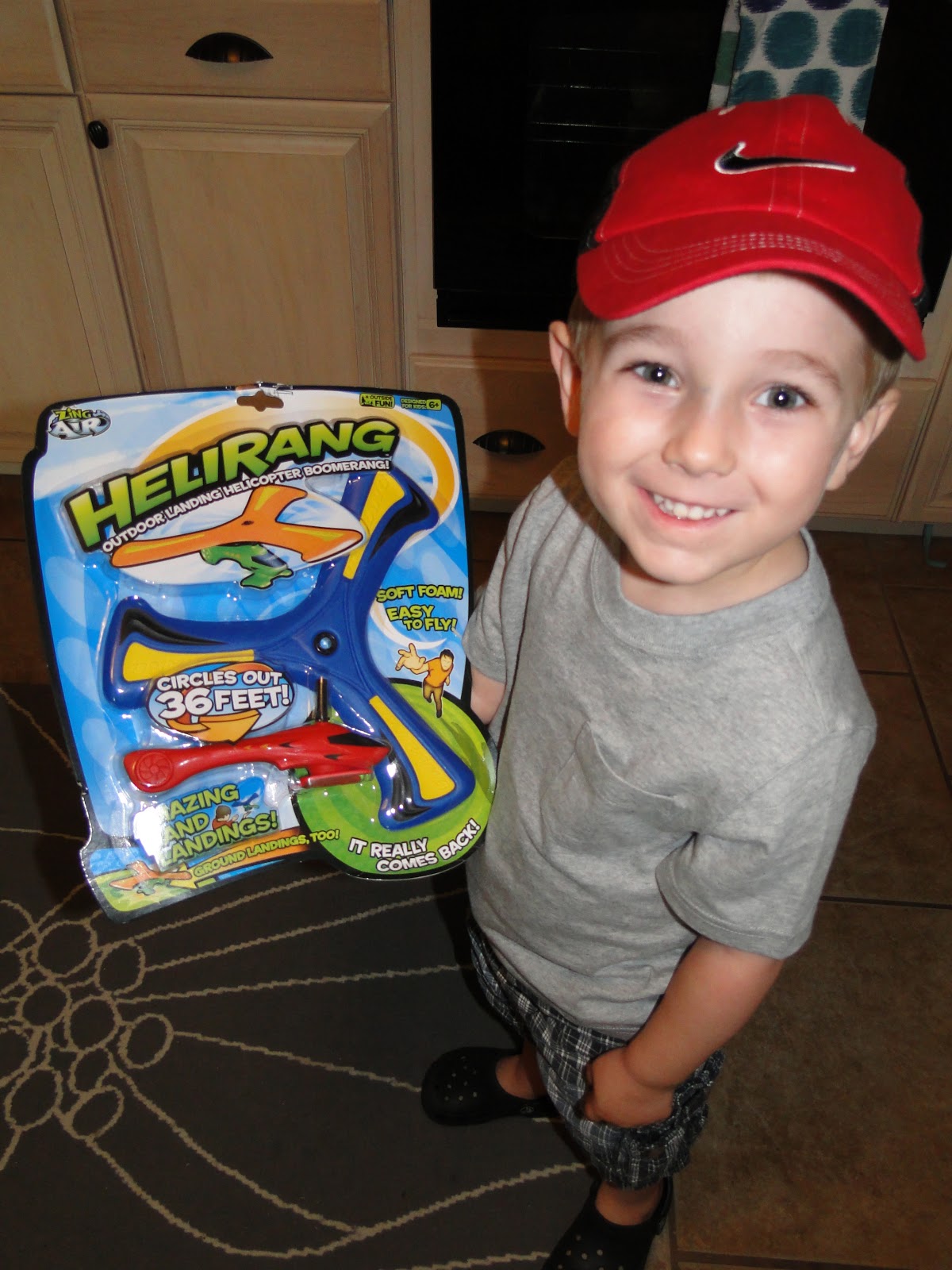 That afternoon I really wanted to get out and do something FUN as a family! I talked to Zach about taking Kye on a date to go see Wreck-It Ralph at the dollar theater but then I looked back at the blog and remember when we took Kye to his first movie and decided Britt might be old enough to try it! She’s still a good bit younger than he was but we don’t go to the theater very often and I had heard great things about this movie! So we decided to take her along! 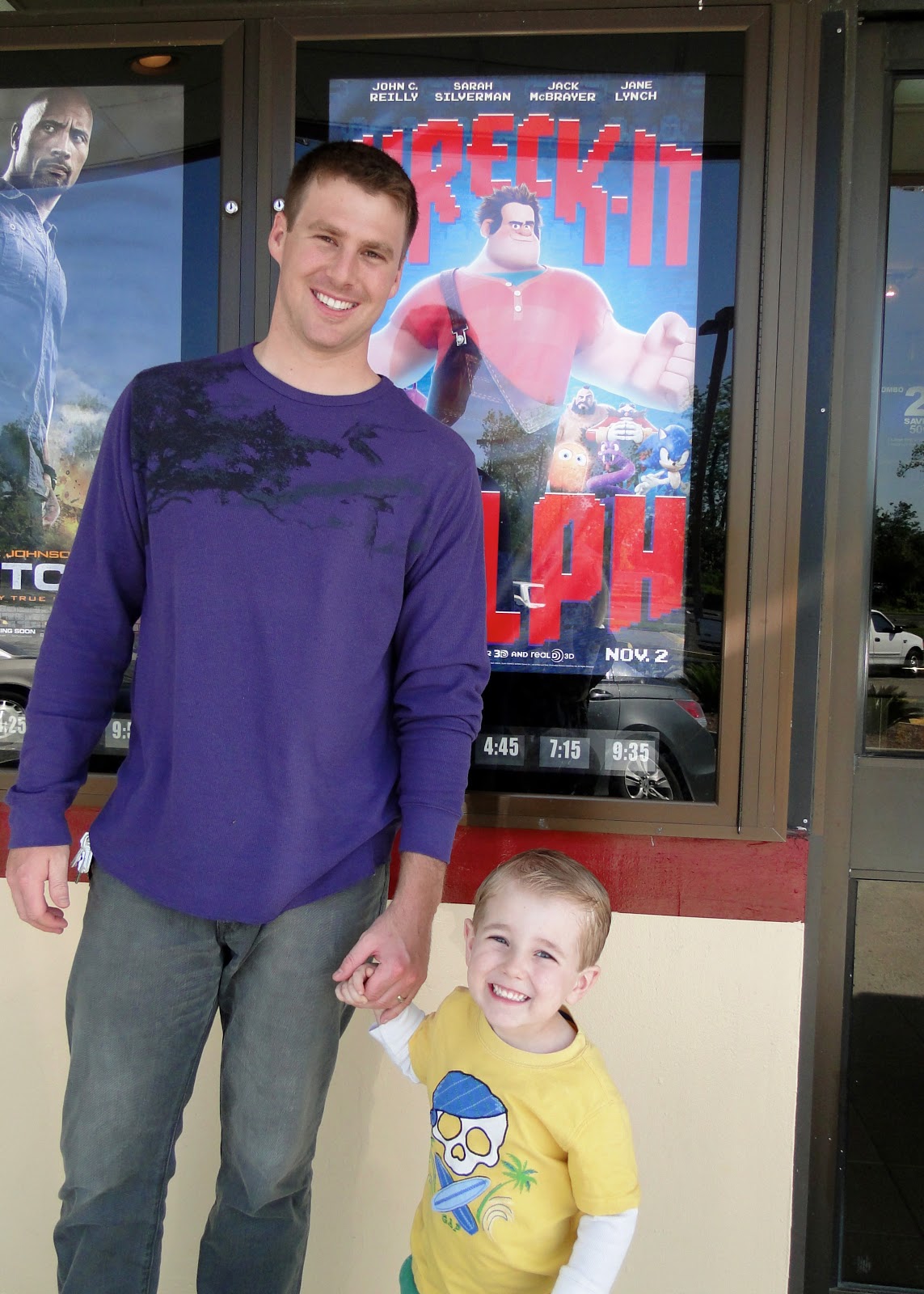 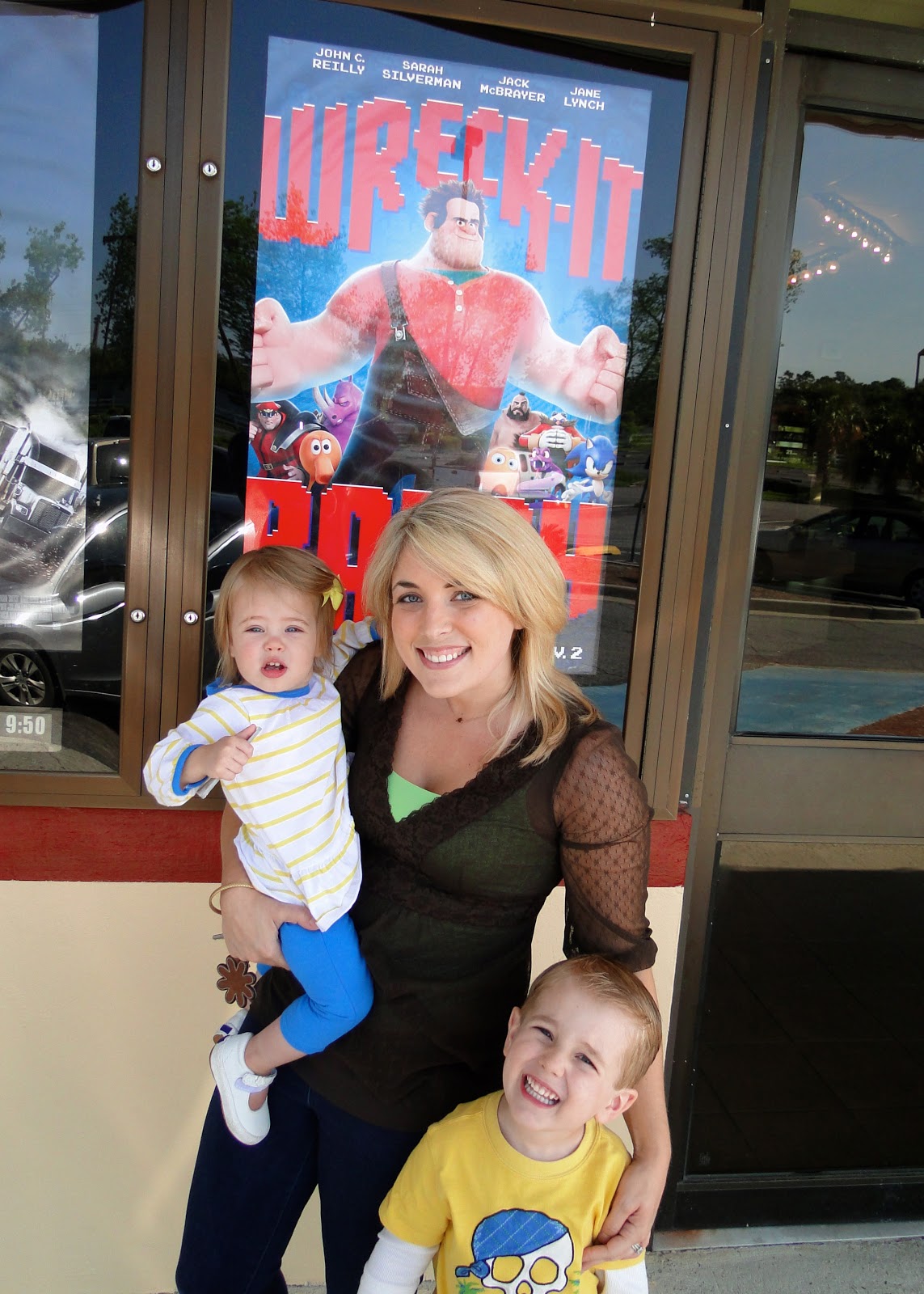 I have been somewhat disappointed in Pixar movies lately. Brave was great, but WAY too mature for Kye’s age (after the one time he saw it he’s had on going nightmares about bears ever sense…and we saw it a YEAR ago). And I couldn’t STAND Cars 2. It was awful, horrible, and a disgrace to the Disney name!!! I was a tad nervous for Wreck-It Ralph. It didn’t catch on very big since I NEVER see any toys or merchandise from it and I was worried if it would be scary like Brave.

It was AWESOME. Like we will for sure be adding it to our dvd collection! So, so good. Zach and I laughed out loud during several scenes. It had super likable characters.  Nothing overly scary. Nothing overly inappropriate. We’re excited for the new Monsters INC movie this summer but being that it’s based in college I’m concerned about the appropriate content issue. Wreck-It Ralph had a few “bad words” (like shut up, stupid, and idiot) and Kye would lean over to me and say “they said a bad word Mommy!” and a few “violent” scenes (like hitting each other) and again, Kye would just say “Mommy, they are making baddddd choices!). Nothing overshadowed the sweet story line (like the overt violence in Cars 2 did for us). It was a very well-done, family-friendly Disney movie that puts Pixar back on my awesome list 😉

Since it was a later movie time I packed the kids dinner and they ate during the movie. It really all worked out super great. Britt did AWESOME! No accidents with the potty training…she held it the whole time just fine. She paid attention to the movie and didn’t mind the dark one bit. She sat with me most of the time and was a little wiggly during some scenes but overall did better than I had expected. Britt has her daddy’s energy and is always on the go so I didn’t know if she’d be able to sit still for the entire movie. But we made it through the whole thing!

It was such a great day with multiple firsts for our family! A BIG thank you to Kayla again for the tournament tickets!

Have you seen Wreck-It Ralph??? What did your family think?