When I sat down to write this today I couldn’t believe I’m at nine weeks! Only a few more to go until I’m done with the first trimester. I really think this pregnancy is going to fly by since I’m due in Dec. For some reason having the baby due in the same year we conceived sounds SO much sooner to me. And doesn’t Christmas always seem to be here before we know it? Here’s what’s going on this week! 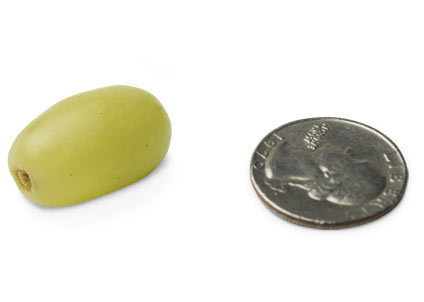 Baby Growth: Blizten is now about an inch long and is the size of Kye’s current favorite food – grapes! He or she weighs just a fraction of an ounce and is starting to look more and more human. Blitzen has all of his or her body parts (even though they still have a lot of growing and changing to do!) and no longer has a tale (but does have a mini penis or vagina hehe). 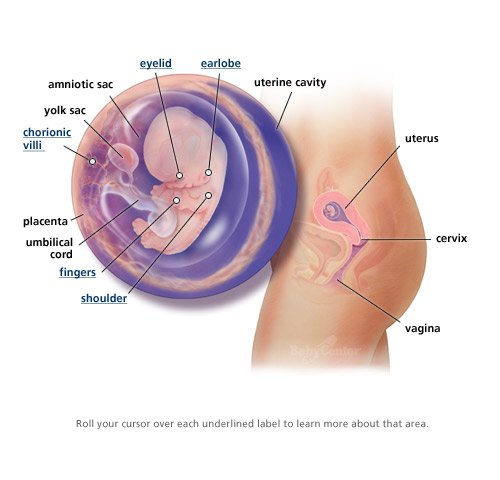 My Symptoms: Whew. It’s been a tough week. In the beginning of the week I was feeling a little better. However, Kye has started to get his two year molars and is a nightmare when he’s teething. It’s made for a super, mega tough week for me and I think it added to my pregnancy symptoms.

I woke up Wednesday morning DRENCHED in sweat. So much so that when I first woke up I thought I had miscarried b/c I just felt so soaked. I felt mega dizzy and literally had to put my head between my legs on the floor to keep from fainting. Zach realized quickly that I was dehydrated. I’ve started swimming laps during Kye’s nap and Zach made the point that when you swim it’s SO easy to get dehydrated because your body doesn’t realize how thirsty you are since you’re in water. Makes a lot of sense so I downed as much water as I could and started to feel a little better.

Kye has swim every morning and it’s tough on me to rush-rush-rush out the door (and rush a teething toddler…). After swim that day I ran a bunch of errands to kill time before a lunch date I had with a friend then went to lunch. So I did quite a bit of running around and carrying a 30 lb kid who would not walk (what getting molars has to do with the ability to walk I’ll never know…). By Kye’s nap I was DONE and physically couldn’t hold my eyes open so I laid down and ended up taking a 2 hour nap (Kye did me a favor and slept for 3 1/2 hours!) However, it wasn’t enough rest I guess b/c later that evening my body told me to STOP. I started getting some pretty painful cramps and as any pregnant lady will tell you, cramps are scary in the first trimester. I sat my butt down and didn’t get up until I went to bed. They lasted for a couple hours and did get lighter with time (and I didn’t have any spotting…b/c I checked…like every 5 seconds…). While it’s wasn’t major (thank the LORD!) it was the wake up call I needed.

When I was pregnant with Kye, I was home all day on my own and could nap, rest, relax, and I wasn’t sick so I enjoyed food. This time around I’m still home but I’m not able to rest or relax at ALL. Plus I’m barely eating (like literally I eat 2 slices of cinnamon sugar toast with enough drink to wash down my prenatals then I pick at dinner…). Not a good combination! I HAVE to make myself (and this baby!) more of a priority and relax more and go to sleep earlier.

My stomach isn’t showing yet, but it FEELS pregnant. Does that make sense? It’s getting uncomfortable to sleep on my belly b/c it feels too hard. My skin still isn’t as clear as usual but it is better than the early days of pregnancy. My boobs are totally tender and I have to change the shower pressure b/c when the water hits them it HURTS. I’m still having very vivid dreams…most of them of sexual nature (no wonder I woke up sweatin’ right?!? haha!).

Last pregnancy week nine was when I went totally crazy (remember?) and it’s funny that moodiness is a big symptom this week b/c I’m at it again! Really my emotions are all about Kye’s teething. The way he’s acting right now puts me in a MOOD. I’ve also started to freak out about having two kids. Everyone keeps saying it’s waaaaay harder adding baby #2 than it was when baby #1 came along. Yikes. It stresses me out just thinking about it!!!

Weight: I’m down 3 lb now from the day I found out I was pregnant. I’m only 8 ounces from my goal weight, but I don’t look it! My belly is for sure got some more jiggle 😉 I started showing with Kye at about 10 weeks so maybe I’ll take belly pics then!

Gender: Blizten has the parts now but we won’t be seeing them until the big arrival date!

Maternity Clothes: Haven’t even bothered with the effort of walking up the stairs yet to go to the attic (it’s too hard to climb them steps!). All my clothes still fit fine, just with a little muffin top haha

Movement: I felt a little fluttering last night but I know it’s WAY to early for that to be baby!

Sleep: I took the one, awesome, nap and would love another! Can’t WAIT to sleep in and be lazy in Bermuda next week. Massages (OK just heard you can’t get a massage in your first trimester…boooooo), Cuddle time, The Office, Sunbathing, Sleeping…what could be better at this point??? I kinda wish this vacation was in Oct and Hawaii or the Mediterranean Cruise were right now so we could spread out the “tougher” trips ya know?

Cravings: I’m enjoying the toast. That’s about it. At this point I even loathe all forms of liquid. The only thing I’ve been drinking is strawberry flavored koolaid. Sure, it’s not that good for you but it’s better than nothing at all! I did make myself a toasted english muffin today with peanut butter, 1 egg, cheese and 1 slice of bacon on it. It was good and I ate the whole thing! I haven’t had any cravings and majority of food disgusts me right now.

What I miss: Food in general. Not feeling tired. My child not teething 🙂 And I’m sure Zach misses me not be a hormonal mess 😉

Best Pregnancy Moment This Week: While Wed was a TOUGH day for me, it was also great b/c it made me really stop and think about doing what’s best for myself and my new baby. I’ve been MUCH better at taking things slow and taking breaks and going to bed earlier. Hopefully it’ll help!

I also got the SWEETEST congrats card in the mail from Stephanie!!! It was my first formal congratulations and it was so thoughtful and sweet. Plus it included an adorable pic of Christian 🙂 Def made me feel special!

Questions/Concerns: Like I said, FREAKING OUT about having two kids in my house. How will we ever get out the door? How will I ever run errands? I think majority of the freak out is b/c the teething with Kye. He really is a totally different child when he’s teething. While Zach and I still LOVE him (very much!) we both also don’t really like him that much right now. I think him being like that makes me worried about dealing with TWO that are in that mood! Yuck! I need to pull out babywise as I think it’ll help me feel better to remember how much the new baby will be sleeping and how their schedules will line up 🙂

I’m also still struggling with the decision about where to have Blitzen delivered. I have gotten SO much feedback from everyone but it’s tough b/c people are either hardcore for SGMC or hardcore for Smith Northview. I’m hoping for some clarity when I meet with Stacy in a couple weeks! Zach and I have an idea we want to discuss with her that I think will solve our problems!

I also want to ask what the rules are for Kye coming to the hospital? What did all of you do with older kids??? I know all our parents will want to be there when the baby is born and I wish Kye could be too but I don’t think it’s allowed???

Goals for next week: RELAX. and maybe try eating more too 🙂