Finally we’re getting back on track! We usually have his appointment 2 weeks or so after he turns the age of the appointment so we went to his 9 month visit on Monday which was only a couple days after he turned 9 months. I went to this appointment on my own because Zach had to quit work early the next day for our pictures and there weren’t going to be any shots 🙂

The timing of this appointment sucked…2:15! Kye goes down for a nap at 12:45 and doesn’t wake up until 3:30 or so. I felt sooo guilty waking him up early. I dressed him in a cute yet casual outfit and had him sleep in it so I could just pick him up and go. I got him at 1:45 and he was so precious. He opened his eyes then kept going back to sleep. I can’t stand waking a sweet sleeping baby! 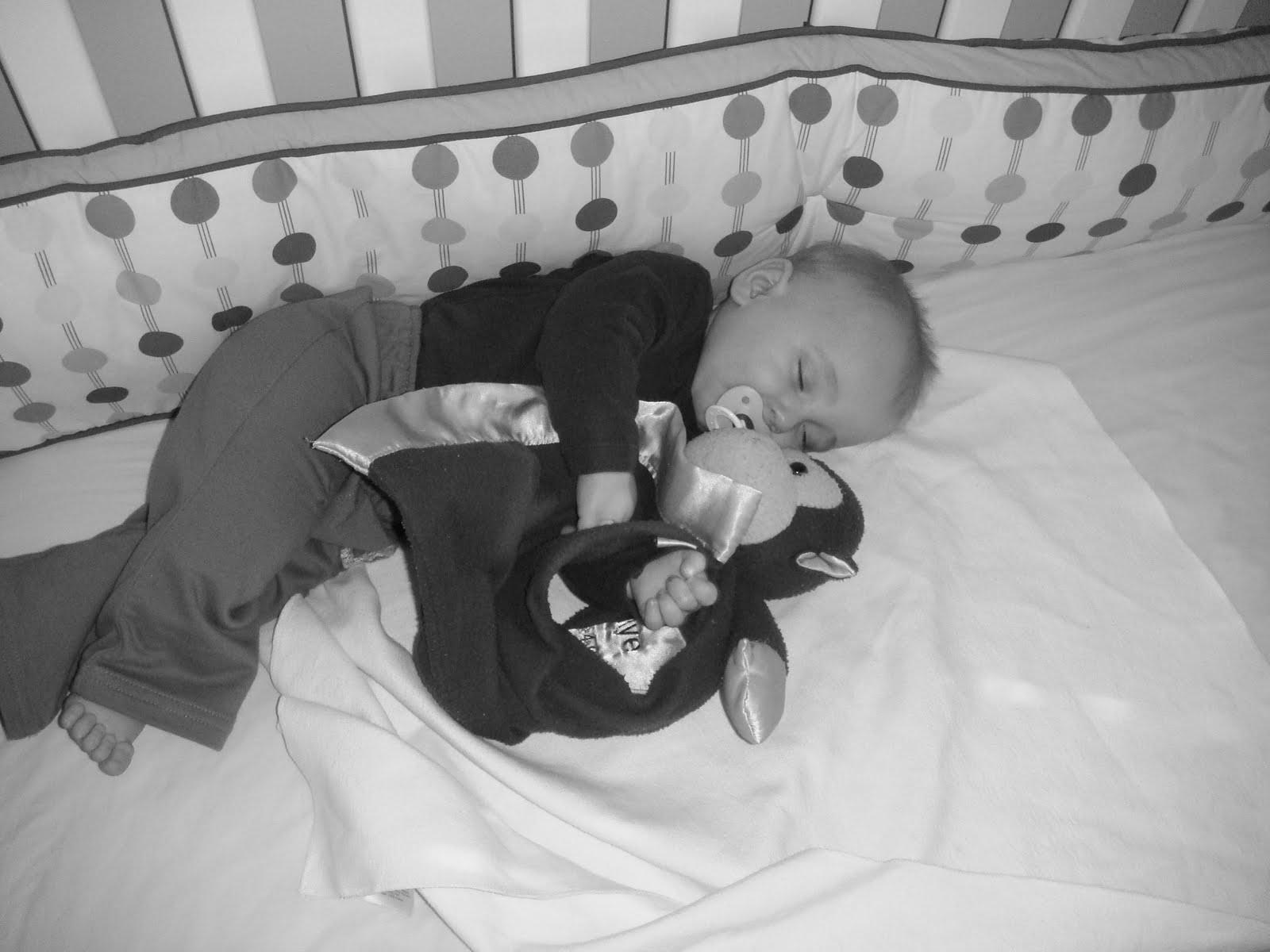 I let him keep his paci and the monkey for the car ride but he never did fall back asleep. I packed a MILLION toys and things to do because last time we sat in the waiting room for an hour and a half! This time, of course since I was prepared to wait, we only waited about 15 min before we went back!

Here are his stats for this month: 21.9 lb (75th percentile), 29 3/4 inches long (90th percentile), and 18 1/8 inches head circumference (75th percentile). Even though he’s still a BIG boy, he’s actually right where he should be for HIM. He has been in the 75th-90th percentiles pretty much since birth so if he suddenly went down to the 50th or something it would actually be bad ya know?

It’s funny because Zach gets soooo pumped about his height. Yeah, he’s tall for his age but he’s also ROUND for his age. I explained to Zach that if he was mega tall then he’d be moving up in sizes due to the length of his pants being too short…instead he moves up in sizes because his pants can’t buckle around that tummy! All the 9 month sizes don’t buckle but they are perfect in the length!

We actually saw the legit dr. this time which was nice. All of my questions had to do with food. Here they are, along with his answers:

He looked Kye over real quick and said everything looked good. He didn’t really ask me any questions or anything. He did offer me the flu shot and I didn’t know what to do!!! Zach wasn’t with me and he’s the shot parent and I’m just not big on them. I get all his vaccines like they all say to do but I just don’t see the need to give him extra shots all the time. I’m not saying I believe in the whole autism thing in relation to vaccines but why give it to him if he doesn’t truly need it? I stay home all day, he’s been breastfed for so long, he’s very healthy, and when we go out I’m very careful. I asked him if I could call Zach and see and we talked about it and then I just felt like I didn’t want to give it to him. I’m a big believer in following my gut as a parent and my gut said no so I said no and we left!

It’s probably not a good sign that I rarely leave his dr. office feeling good. I’m usually pretty annoyed. This time it bothered me that Dr. Griner shrugged off the probiotics thing so quickly. I feel like he’s so busy with so many patients that he doesn’t have time to stay up to speed on the newest stuff out there ya know? I also didn’t like that he didn’t look Kye over very well, even ask about him crawling or other milestones, etc. I know a friend who goes to the same dr and she has had issues with this as well. I just feel like it’s a quick check and then he tries to bolt for the door. I felt rushed asking my questions and I actually felt rather stupid asking them. I honestly feel like we will eventually switch pediatricians. I should feel like my child matters to his doctor even if he doesn’t ya know? And yeah, Dr. Griner and his staff are ALWAYS nice and they remember our names and such but I just don’t feel any kind of connection. Maybe I’m just used to Stacy, my obgyn dr, who is amazing and awesome and everything you could want. Maybe I’m too hard on Dr. Griner. Anyone else have any pediatrician issues? Should I switch? Stick it out?

Kye was very good for his appointment though! And did AWESOME without his full nap. I’m always impressed by my child! They did say that the next time we come (for his 12 month visit) he’ll be using the “big boy” scale that you stand on instead of sitting in it! So exciting! His birthday is the same week as my brother’s wedding so we had to book the appointment a little later than 12 month which annoys me (I guess I was just very annoyed that day huh?) but oh well. And Daddy will be at that one too as it’ll be shots again! Yuck!