Don’t forget! You can win a copy of Water for Elephants! I’ll pick a winner Sunday May 1st at 11 PM EST so go HERE to enter!!!! Only like 5 people have entered so there’s a GOOD chance of winning 🙂

At this point in my pregnancy with Kye we started telling people I was pregnant so I’m excited to go back over old blog entries since this is about the time I started blogging (My very first blog entry was catching everyone up on my first 8 weeks pregnant! You can read it here). Here’s what’s up with Blitzen this week! 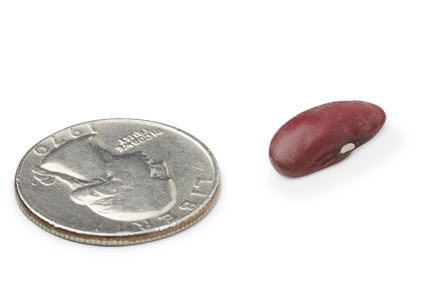 Baby Growth: Blitzen is about the size of a kidney bean (a little over half an inch) and is constantly on the move even though I can’t feel him or her yet! Webbed toes and fingers are poking out from his or her hands and feet and the tail is just about gone. As of right now the baby doesn’t have either boy or girl parts so technically any guess people have been having on the sex can’t be right yet!

If I were able to have an ultrasound this week, here’s what we’d see! 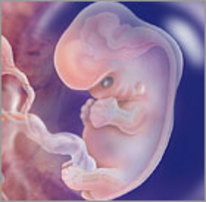 My Symptoms: I have been feeling less nauseated but still don’t have any appetite and when I do eat I don’t really like anything and it doesn’t take much to make me feel full. At dinner last night even the idea of eating a biscuit made me want to vomit. SO unlike me!

I don’t want to jinx myself but my skin is REALLY clearing up (just in time for the wedding tomorrow yay!) and I feel more like myself again. I’ve had people say they want to see a baby belly picture but ummm there isn’t any baby belly to show. What “baby belly” I have is still left over from Kye so there’s no need for anyone to see that 😉 I’ll start doing weekly shots once I have a pregnancy belly to show. I actually feel skinnier than I have in AGES. I was in a sports bra a couple mornings ago and both Zach and I were like dannnnng at my body right now. My boobs HAVE started growing (and are getting tender too) and my stomach is smaller than usual. Better enjoy it while I can huh?

When I wake up in the mornings my body is kinda sore. Isn’t that strange? And I’m so, SO worn out. I’m sure it’s a combination of pregnancy and not eating enough. Zach said he never got sympathy symptoms when I was pregnant with Kye but that this time he’s EXHAUSTED all the time too. Isn’t that funny? I guess we both need to sleep more!!!

I have started having more vivid dreams (last night I dreamed that Neela was falling and I was trying to catch her…random!) and am starting to wake up having to PEE. I’m peeing quite often actually!

Weight: I’ve lost 1 lb 6 oz as of right now. You’d think I’d have lost more with how little I’m eating but I’ll take it! And I’m sure the better I start to feel, the quicker that weight will GAIN rather than lose.

Gender: So far everyone is saying girl (I’m not going to post a survey right now b/c seeing all the “girl” votes would just get me excited!) and I don’t know if that’s because they honestly think girl or if it’s just because they know that’s what I want. Zach and I both feel that it’s going to be a girl, but again is it just because that’s what we want??? I’m not good at gut feelings with stuff like this!!!

Maternity Clothes: still in the attic! I’m enjoying wearing clothes that were a little too tight on me before because now they fit!!!

Sleep: It’d be GREAT to get a bunch more of it but I also feel like I have SO much to do so it’s tough to decide which is more important. Several nights this week rest won out. I may not actually go to sleep earlier but I’ve been getting in the bed earlier and resting. Reading or just watching tv. I’ve also been enjoying hot tea and hot cocoa as it seems to really relax me!

Cravings: When I do have cravings I crave seafood. I’m not sure what is safe seafood-wise to eat but I am craving crab legs, shrimp, and lobster. I bought some of that fake crab (that comes in a bag?) and that seems to hit the spot right now! I do not want ANYTHING beef related. Yuck. Which is the exact opposite of how it was with Kye.  I also don’t want anything dairy. No milk, no cereal, no ice cream. Instead the only eating out type food I want is Zaxbys! SO GOOD.

What I miss: Having energy!!! Cooking dinner and not feeling like I’m going to hurl at the sight of it.

Best Pregnancy Moment This Week: My massage for sure! Kye has been all about talking about friends. The other night we were talking about his favorite friends (right now being Colt, Aubrey and Stevie) and I asked him “Is Mommy your friend” he answered, “yes ma’am!” I then asked, “Is Daddy your friend?” Answer, “Yes ma’am!” I like to ask him open ended questions and hear his answer so I asked, “Who is your BEST friend? (assuming he’d quickly say Colt!)” His answer? “The baby is my best friend.” So random that he would even think to say that!!! It’s also been great this week finding out that like 5 other people are pregnant. I love being a trend setter haha

Questions/Concerns: Need to probably look up pregnancy rules about sea food eating. Also still praying about the tough choices I have to make regarding who will deliver Blitzen.I was also wondering if it’s bad to sleep on my stomach still?

Goals for the week: Phhh did you read the goals last week? I sucked that up! This week I REALLY do HAVE to start walking/swimming. I also need to start an arm workout routine AND get cracking on the Bradley Method stuff. I’m slacking so bad! Hopefully my hardcore sick days are behind me and I can have more energy to focus on these tasks. I also need to get going on decorating Kyes room and the rest of the house so as time gets closer I will only be worrying about baby things!