It’s crazy to think that it’s been SEVEN YEARS since I married this hottie: 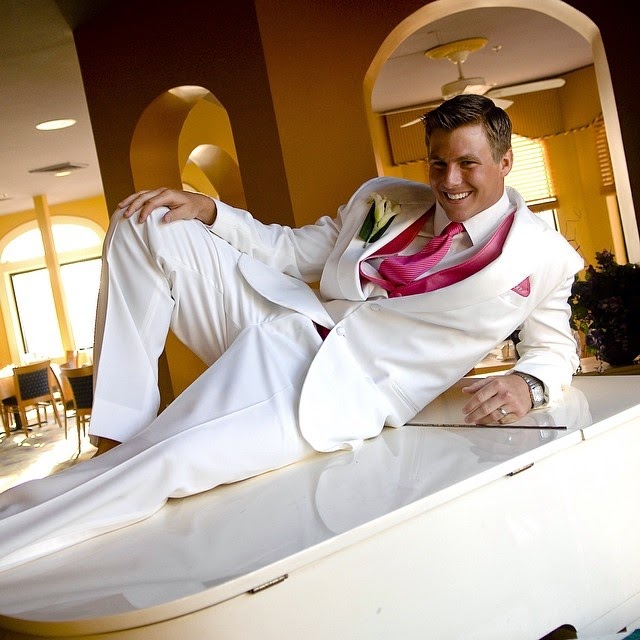 Someday I want to go back and blog about our entire wedding weekend. It really was SO fun! We got married on a Monday morning (it was Memorial Day…at 7 am…) so we had our friends and family come down the weekend of our wedding and did SO many fun things! It was a blast and looking through all the old pics brought back so many wonderful, happy memories. I’d love to share them with all of you at some point and have them be in our family blog books for the kids to read about someday 🙂 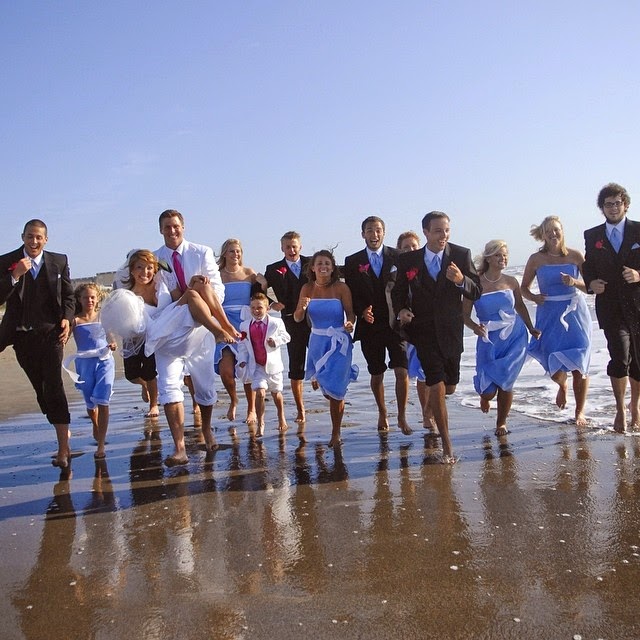 This year was the most low-key anniversary ever. Usually we go on some kind of trip to celebrate our anniversary. We go somewhere just the two of us and have some together time. This year we had to move our annual beach trip up from the 4th of July to Memorial Day so we weren’t able to go away. Our actual anniversary also fell on a Wednesday which meant church night and therefore, no legit date either.

Zach was super sweet and felt like we had to do SOMETHING on our actual anniversary! So we busted out the handy gift card Aflac gave us (They do some contest where they mail us a massive amount on a gift card to either Red Lobster, Longhorns, or Olive Garden! Score!) and Zach let me choose the place. He picked it up on his way home from church (I drove separately to get Britt home and in the bed quicker) and we ate our feast while watching tv together. Ah…romance 😉 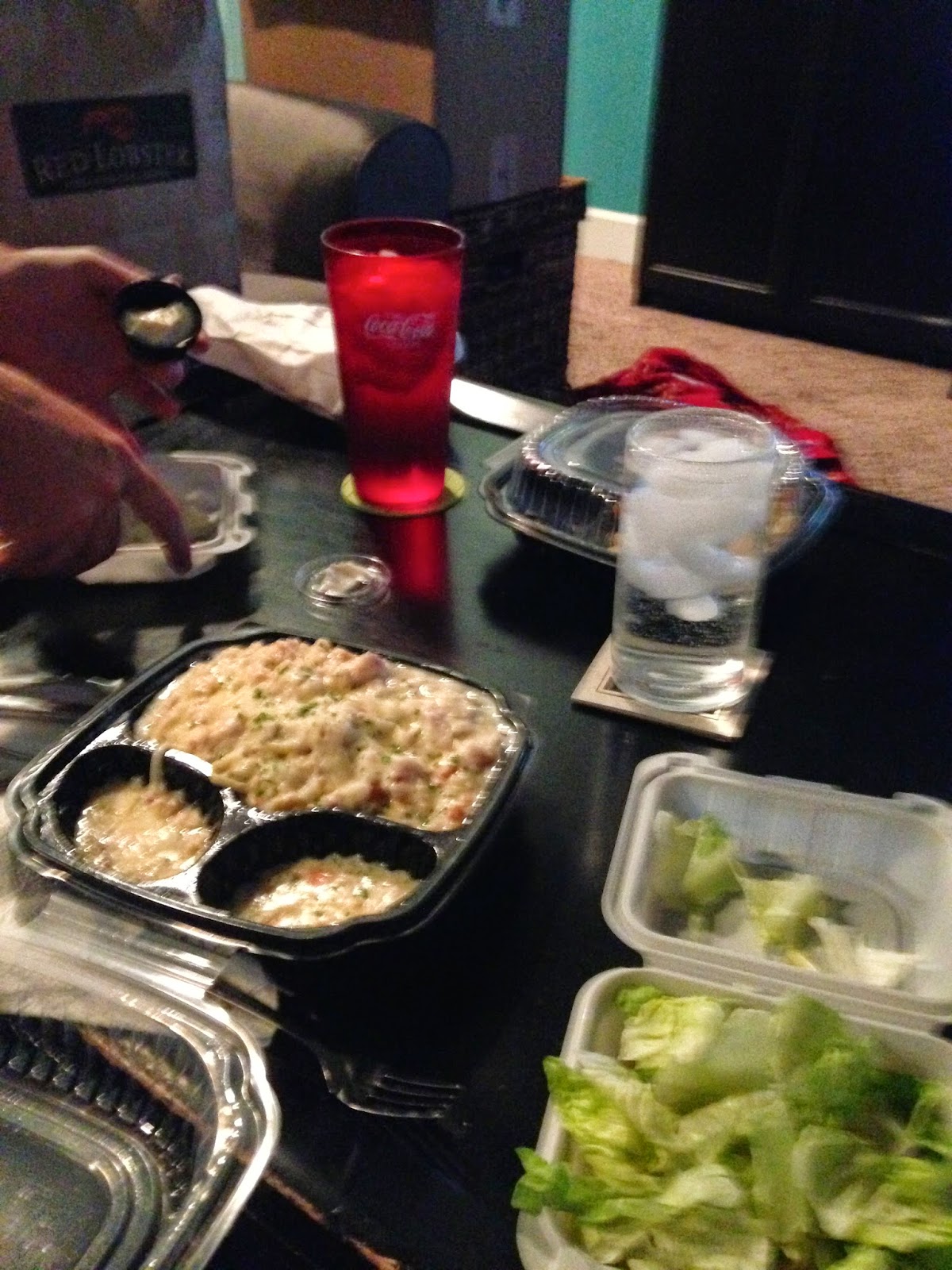 The next night we had a night out! Casey and Jordan came and watched the kids (which turned out to be the last time that will happen b/c Carter was born that following week!) and Zach and I got dressed up and he surprised me with a new place for our romantic dinner! It also worked out where I had my hair done that same day so I had her style it the way Zach likes it 😉 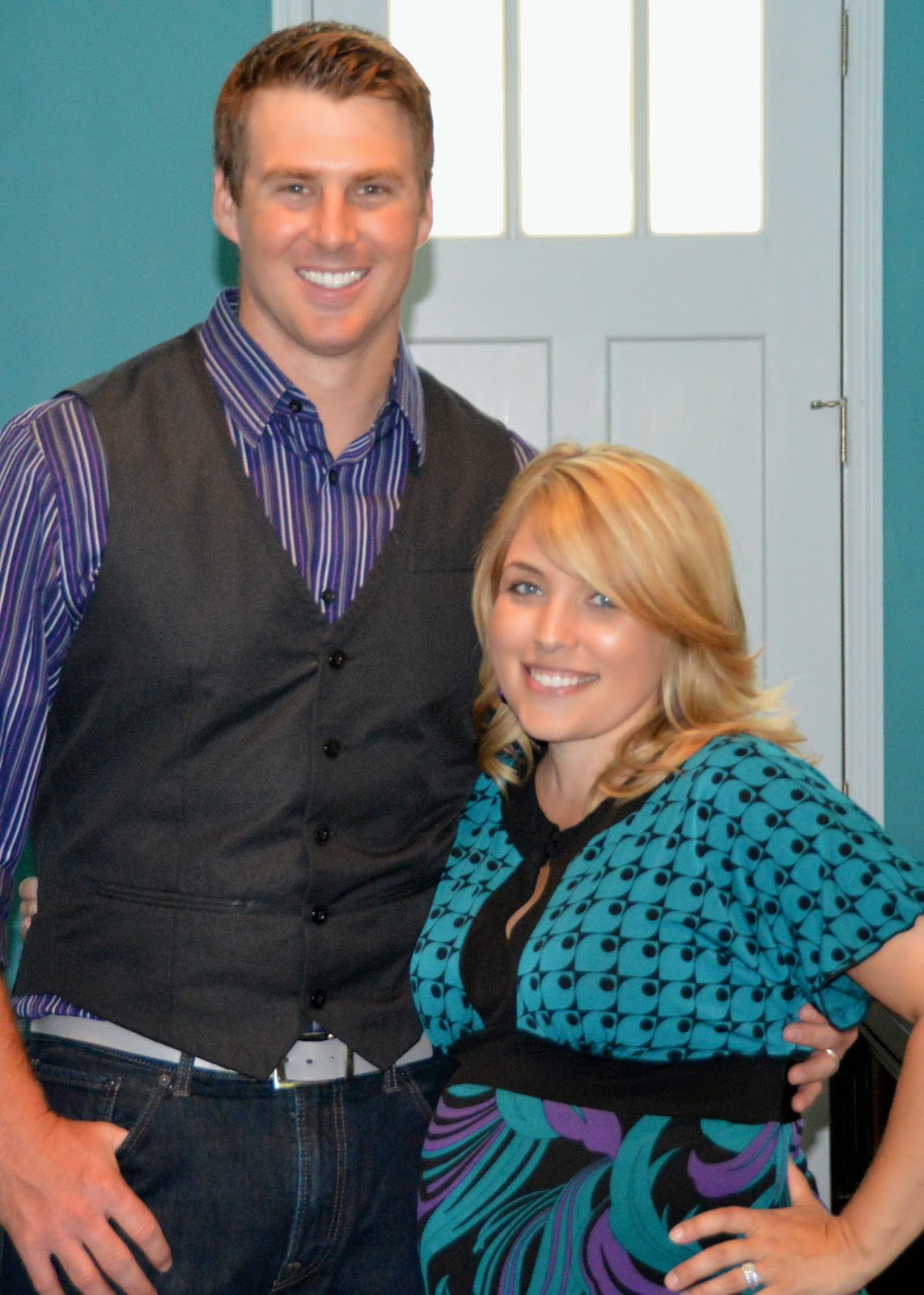 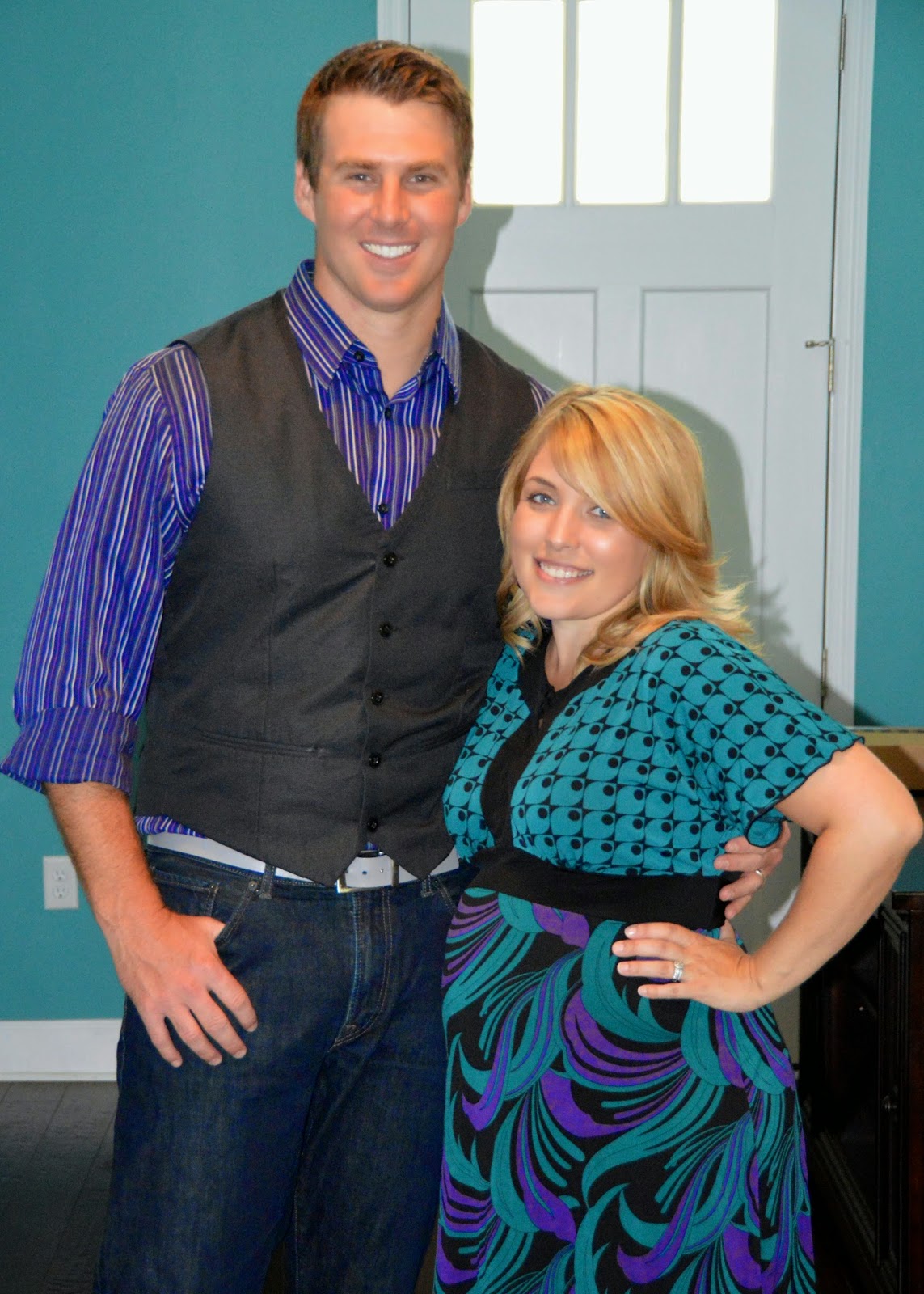 On the way to dinner we went by the Health Clinic. I know, sexy. I had to get my TDap shot (post coming ASAP about the importance of it!!!) and it made sense to go then since they were open later that evening. 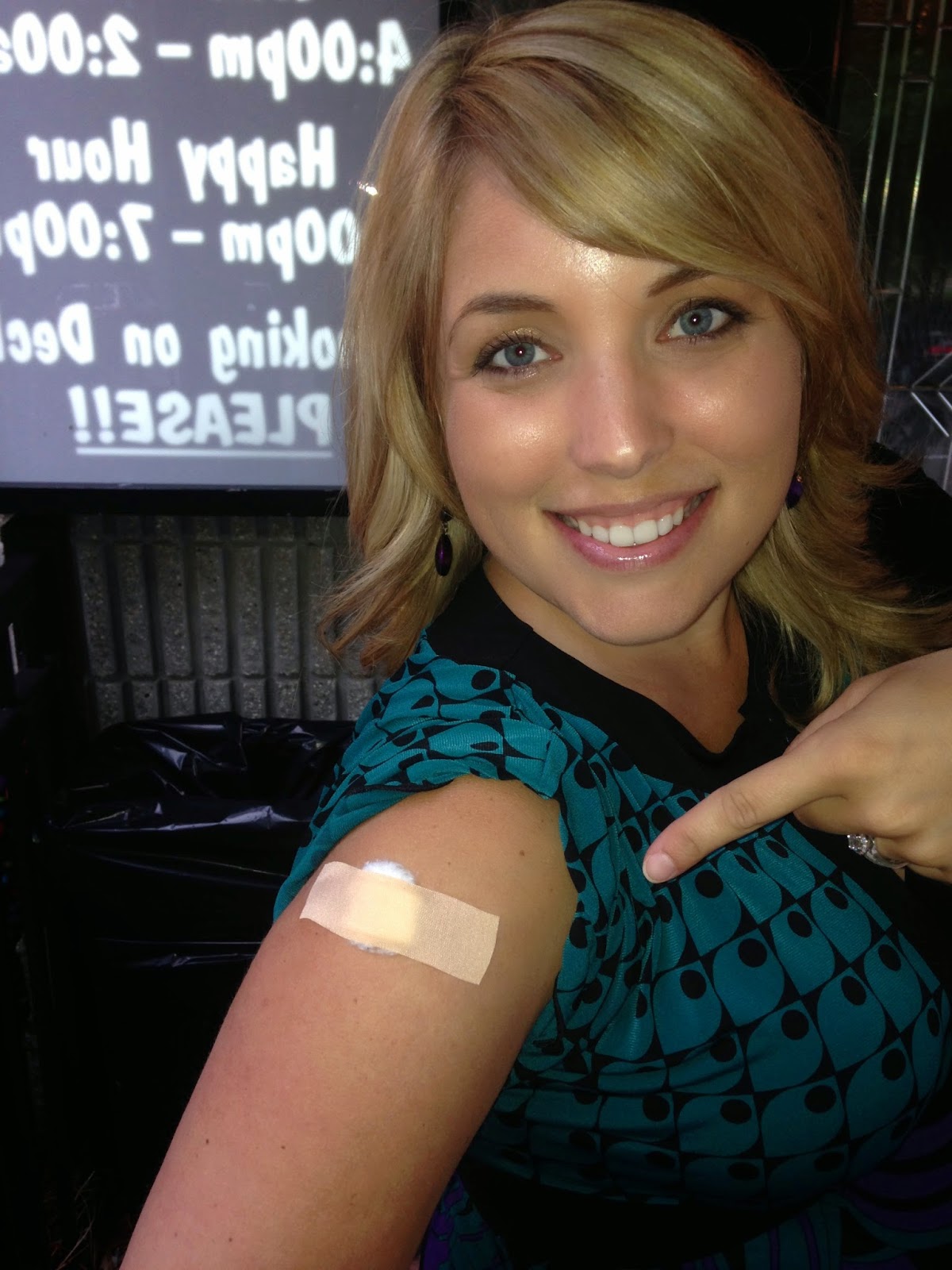 Then we headed to dinner! A place in town recently got a new owner and Zach had been up there for work and wanted to try it out. Um y’all! Creekside Tavern (if you are local) has LEGIT good food now!!! Zach had a steak and I got shrimp and grits and it was FABULOUS! We had such a nice time just sitting and talking and didn’t rush or anything. It’s such a blessing when you have family to watch the kids because you don’t feel like you have to hurry the way you feel when you are paying a sitter!!! 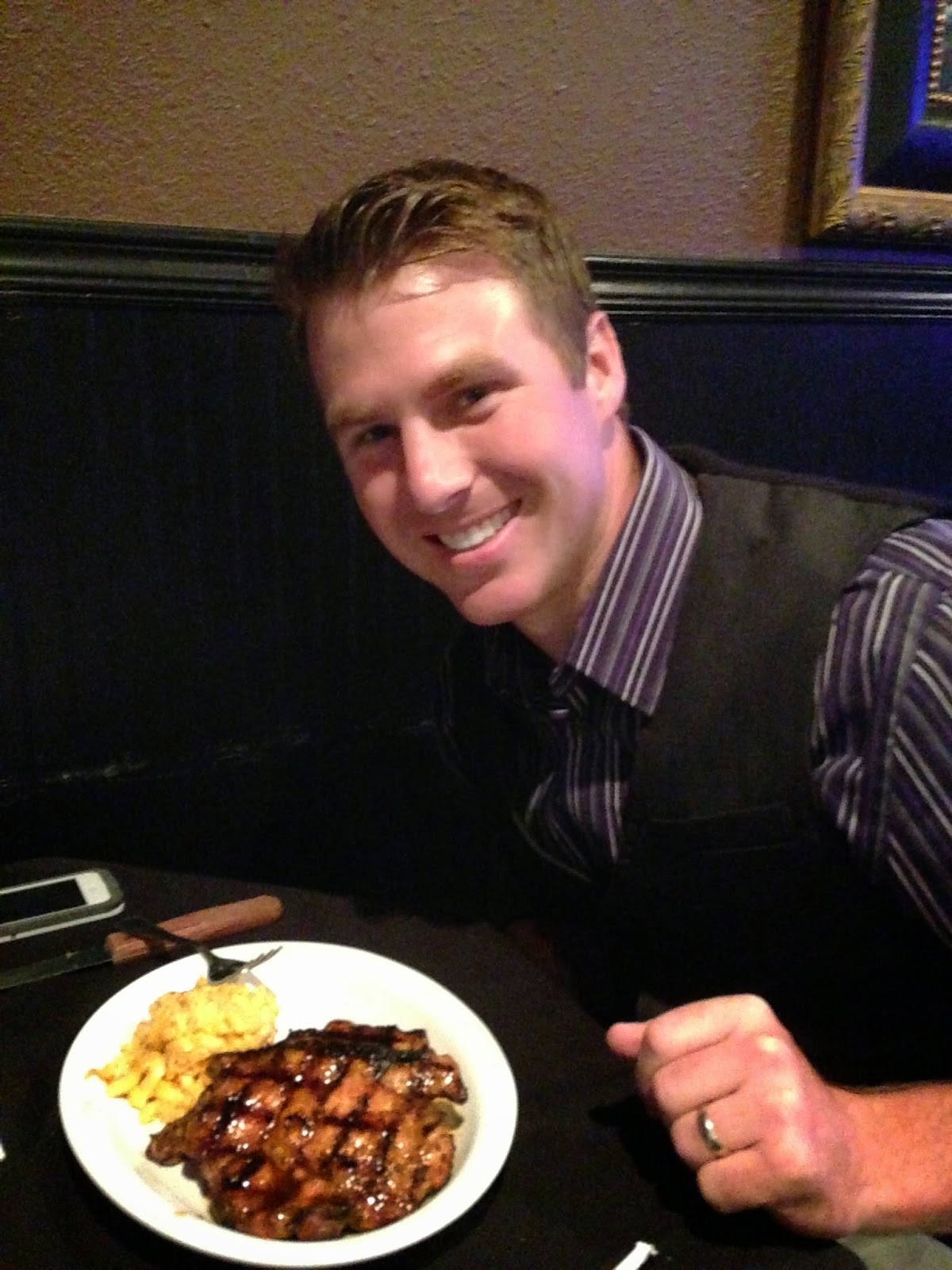 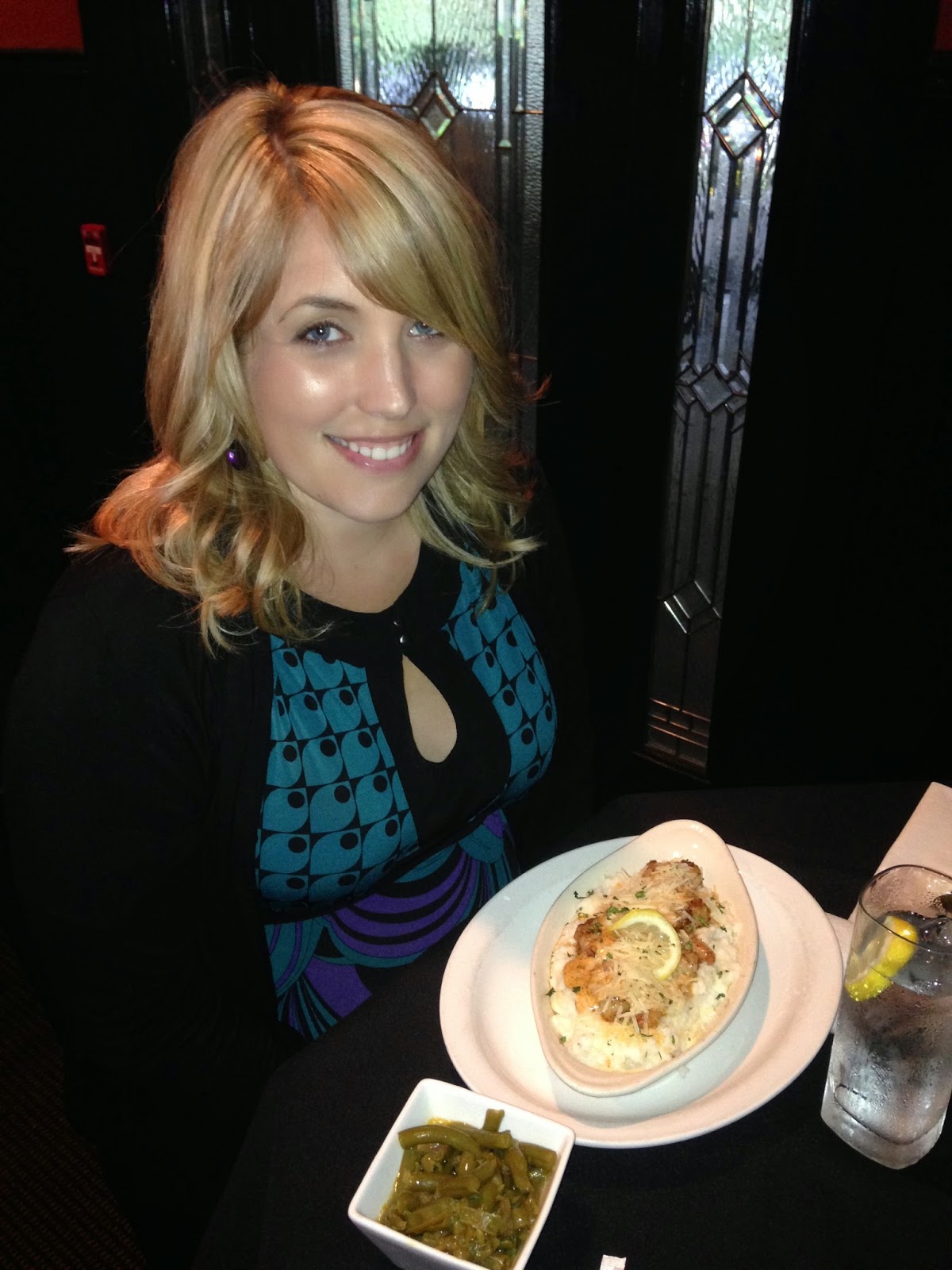 Happy Anniversary to US! 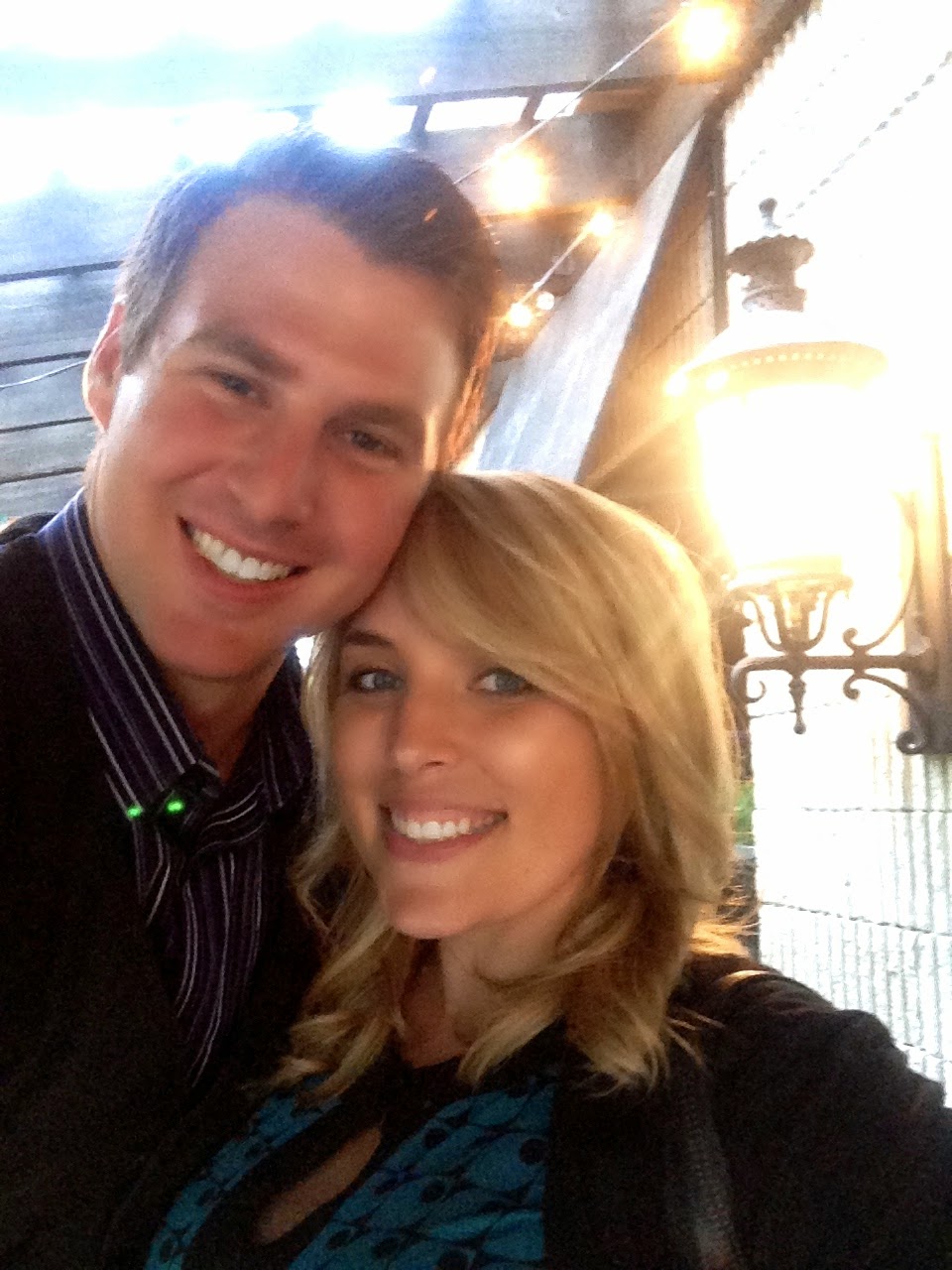 Originally we planned to go away together to Jekyll for a short trip and we planned to really celebrate our anniversary then. We were supposed to go the weekend after our anniversary trip but Casey had Carter and we did NOT want to leave..plus I had my bed rest issues so we ended up canceling the trip. We DID end up getting to go but since we didn’t know we’d be going we went ahead and opened our gifts from each other the week after our anniversary 🙂 And, yes, again we busted out the gift card! This time we got Olive Garden 🙂 And watched more tv together and then exchanged gifts. We are pros in the romance department 😉 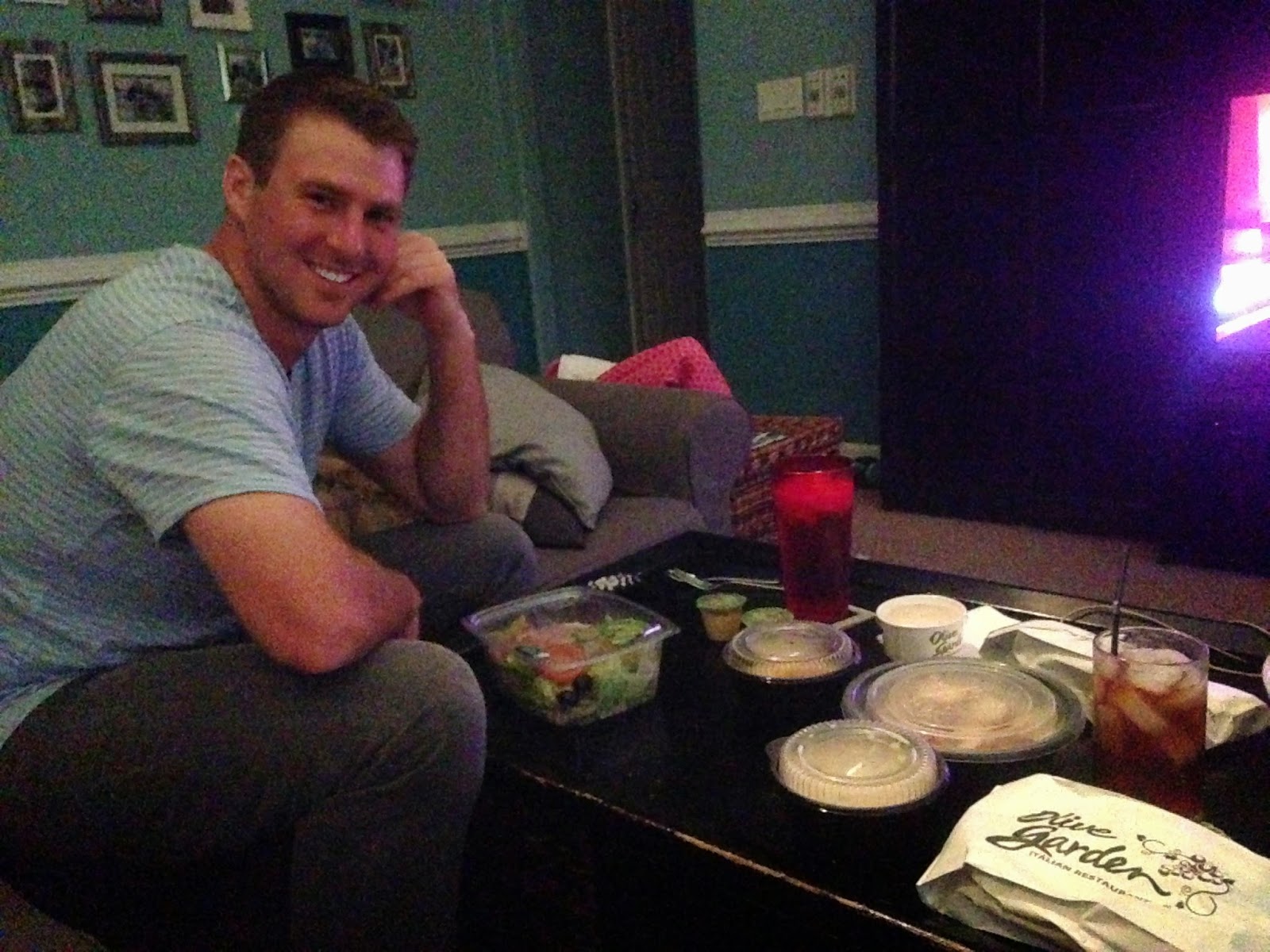 I like to try to do a traditional gift for our anniversary each year. 7th year one of the traditional gifts is copper so I found a copper custom golf marker for Zach! Isn’t that a GREAT idea?!?! I searched on Pinterest for ideas and omg y’all. I mean most of the stuff I saw was SO CHEESY. Guys do not want some crafty present?!?! Right?!?! Sure, for Father’s Day is one thing…but anniversary?!?! NO way! I thought this was a practical gift yet also sweet and thoughtful 🙂 And affordable too! You can order one from Risky Beads on etsy! 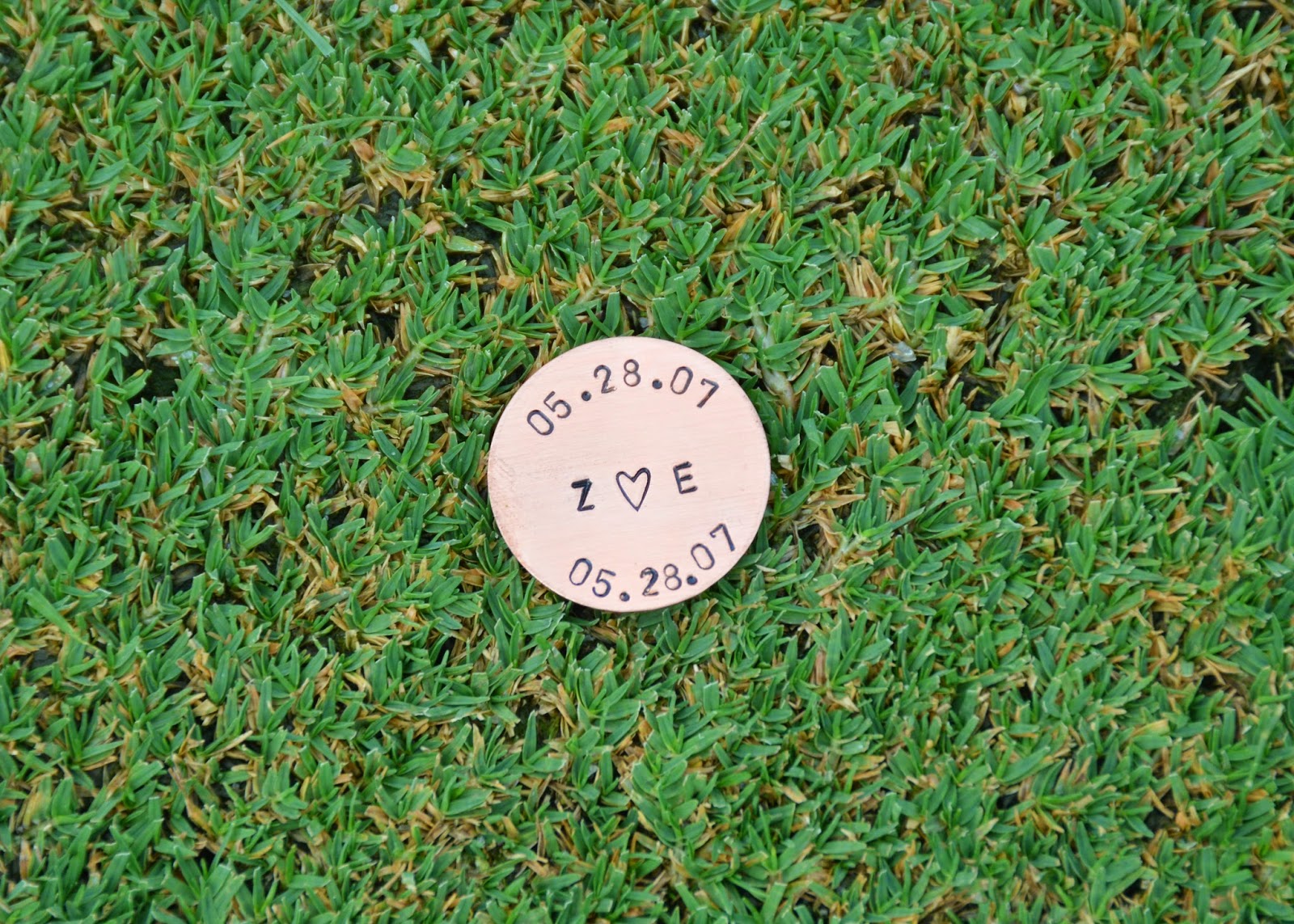 I had a tough time thinking of what to get Zach this year. Anniversary, Father’s Day and his birthday are all so close together! I thought about getting him a new watch but then I realized…he NEVER wears any of his watches because ALL the batteries are dead in them. So as part of his present I took all of his watches to our jeweler and had new batteries put in them 🙂 I wrapped them up and gave them to him as a gift haha! But then I also surprised him with a super awesome new watch too (check this thing out…so cool!) He loved it! I also got him a new wallet. He is picky about his wallet. He really likes the european style (it’s longer than regular ones) and they are not easy to find! I ended up getting it from Amazon and it holds up great, especially for the great price (you can get one here!). 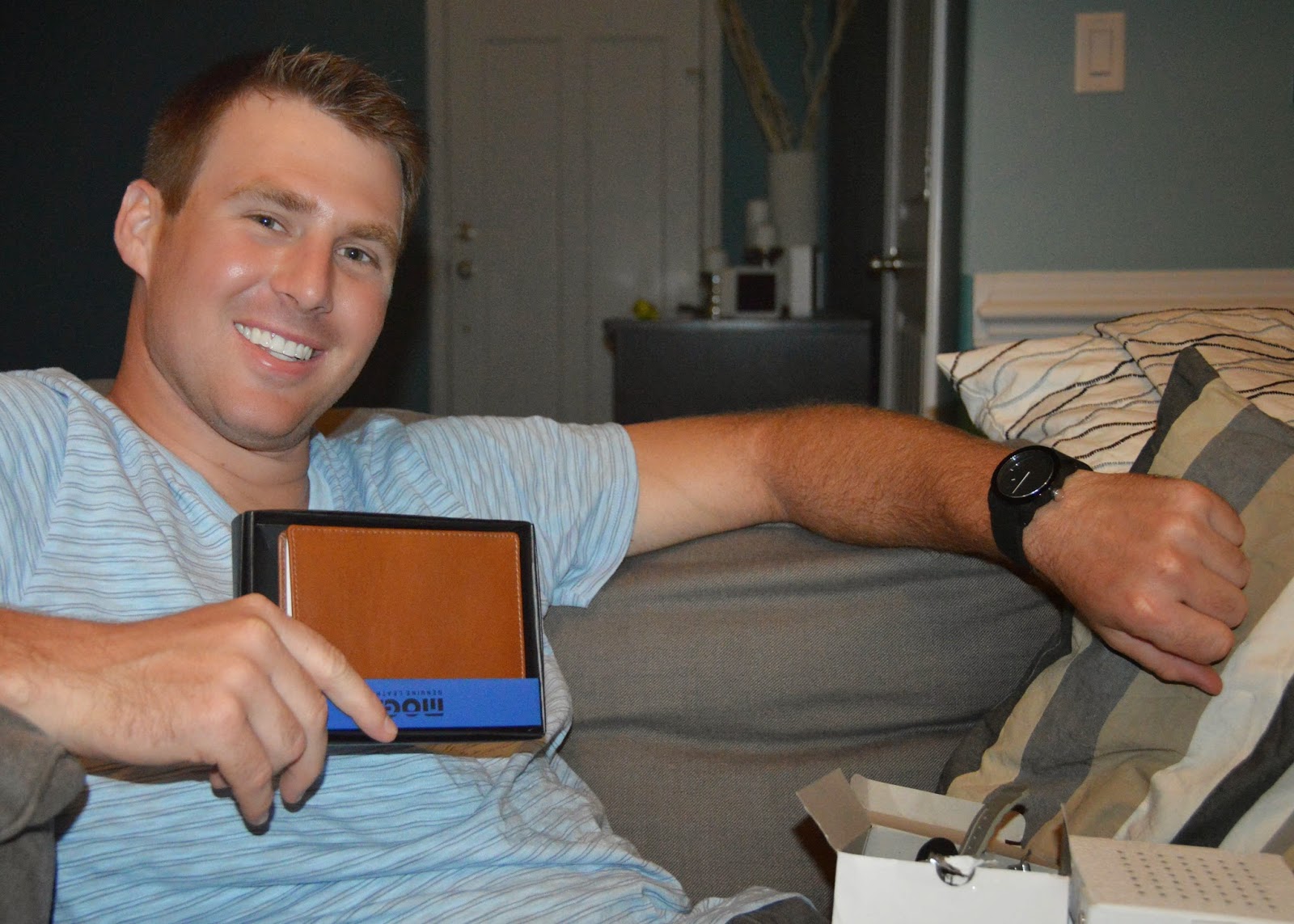 Zach did awesome with my gifts this year! I have had a FIRST generation iPod since they came out. We weren’t even married yet. My dad actually got it for me for my birthday (I think my 21st?) and it’s engraved with my maiden name haha. It’s OLD. It’s def held up for a long time but it’s just at that point of no return. I love my new iPod! And it has copper in it so that totally goes with the traditional gift thing 😉 I love how small the Nano is yet it can still fit all my songs! Now instead of having CDS in the car for the kids I just made a playlist 🙂 He also gave me a little certificate that’s good for either a pre-natal or “post-natal” massage 🙂 He knows how I like to get a massage before the baby is due (it helps get labor going!) and he knows how badly I need the relaxation! Both gifts were SO thoughtful!!!! 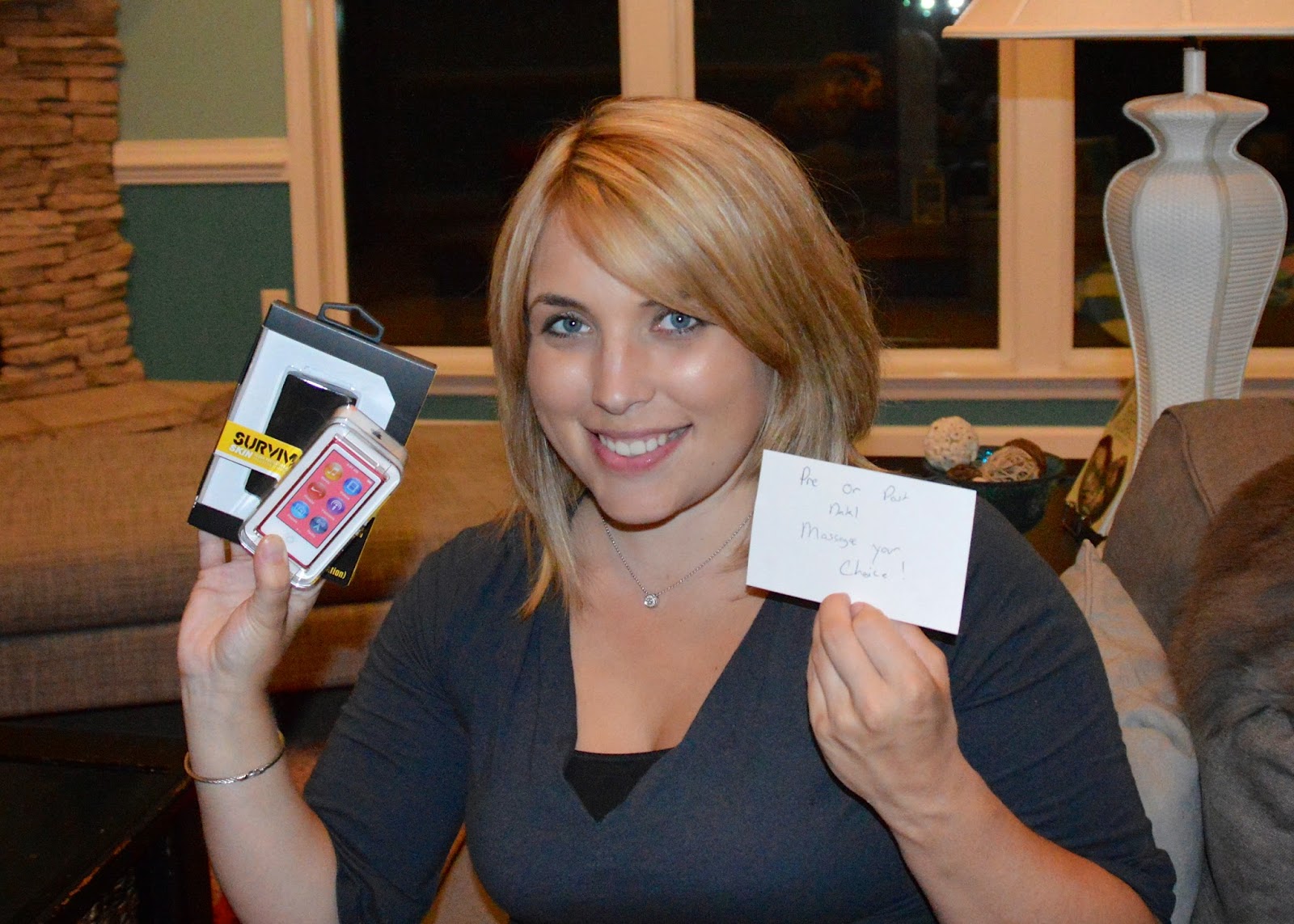 We may have done things a good bit differently this year than we normally do but we still enjoyed plenty of quality time together and I’m SO glad we were able to take the Jekyll trip after all (post to come!).

I am so thankful and blessed to be married to Zach. I’ve heard a lot about the “7 year itch” and how it’s the year of the highest divorce rate. I TOTALLY get why. By year 7 most couples probably have two kids. And two kids really does change a marriage in a way that one kid doesn’t. BOTH of us are always busy. If we go somewhere we are usually split up. One with their eyes on one kid, the other with their eyes on the other kid. It’s a constant “divide and conquer” situation and that means less time together. Two kids also means less alone time with each other because it is harder to find child care. It’s a bigger effort to go and do things. There have been plenty of “valleys” this past year in our marriage. There have been times I’ve felt like I have a room mate more than a husband. We pass in the hall and give a quick kiss goodbye each morning and goodnight each night but that’s it. Our lives can easily slip into a routine where our efforts go towards the kids and not towards each other. Our conversations turn into “to dos” rather than actual talks. I am SO thankful we are both SO committed to our marriage vows. We know there will be times of struggle, but we also know that neither of us are going anywhere!

I know this future year of our marriage will bring new challenges as we will now be outnumbered 😉 I know there will be different struggles we will face. More valleys. More times of frustration. But I also know that there will continue to be many, many hilltops for us. That we share a special bond that I could never share with anyone else. The longer we are parents together, the more connected we become. The inside jokes. The secret smiles when the kids say something funny. The moments only we share. I love those times. I love when we DO have a chance to just be together just us. I love laughing together. I love planning our future together. I am so blessed to have a husband who sees the bigger picture. We are both big picture people and we know our lives may be crazy now, but we savor it all because we also know how quickly these days will pass.

Another year down and a lifetime together to go 🙂 I can truly say I’m more in love with my husband now than I was when I said “I do” seven years ago and I can’t wait to see what the future will bring for us!