Have you entered the Blitzen Baby Pool yet?!?! You can enter it HERE and see what prizes I’m giving away HERE! 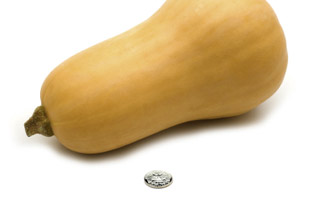 Baby Growth: Blitzen now weighs 2 1/2 lb and is a tad over 15 inches long from head to heal (the size of a butternut squash). We had the 4D ultrasound this morning (more on that later….) but it’s neat how much the baby really does look like this picture! 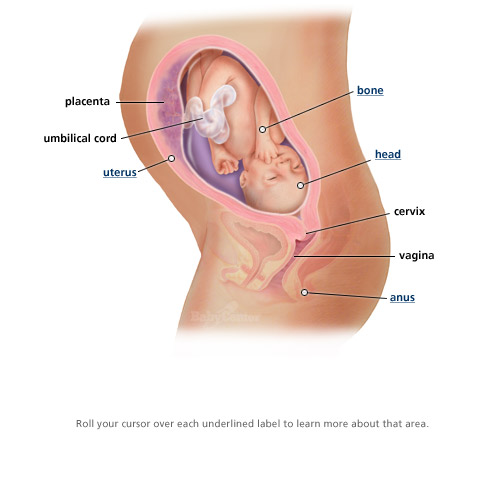 Belly Picture: Thanks to my mom for snapping these in Disney for me! I feel like from the front I look pretty awesome. NO ONE ever believes I’m as far along as I am and I still had people at Disney saying they couldn’t tell I’m pregnant. I’m thinking for week 30 I may take a legit belly picture just because I think it’s a pretty cute pregnant tummy. Then again, I thought that last time and looking back I’m pretty grossed out! 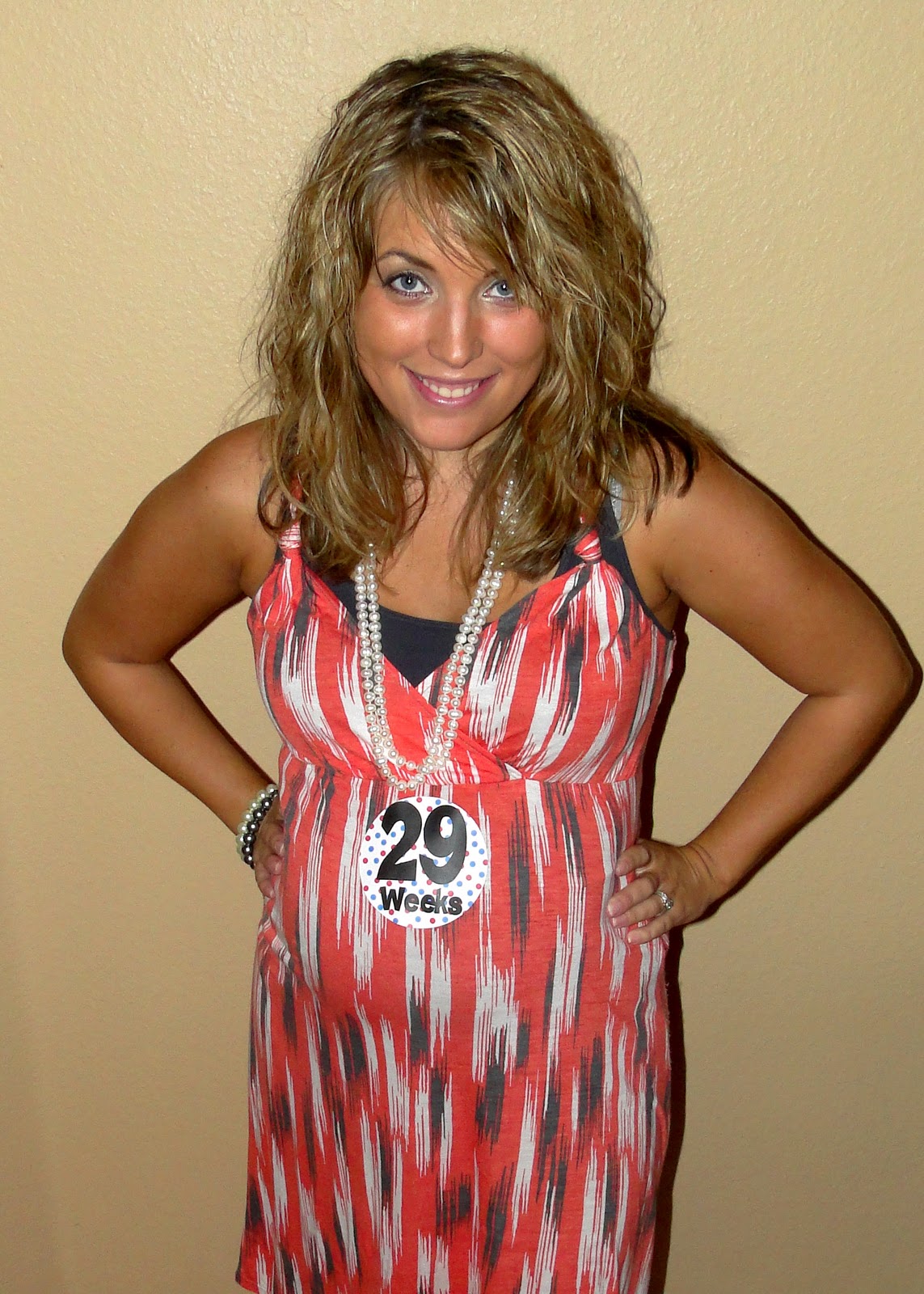 You can get some weekly belly stickers like mine from HERE! 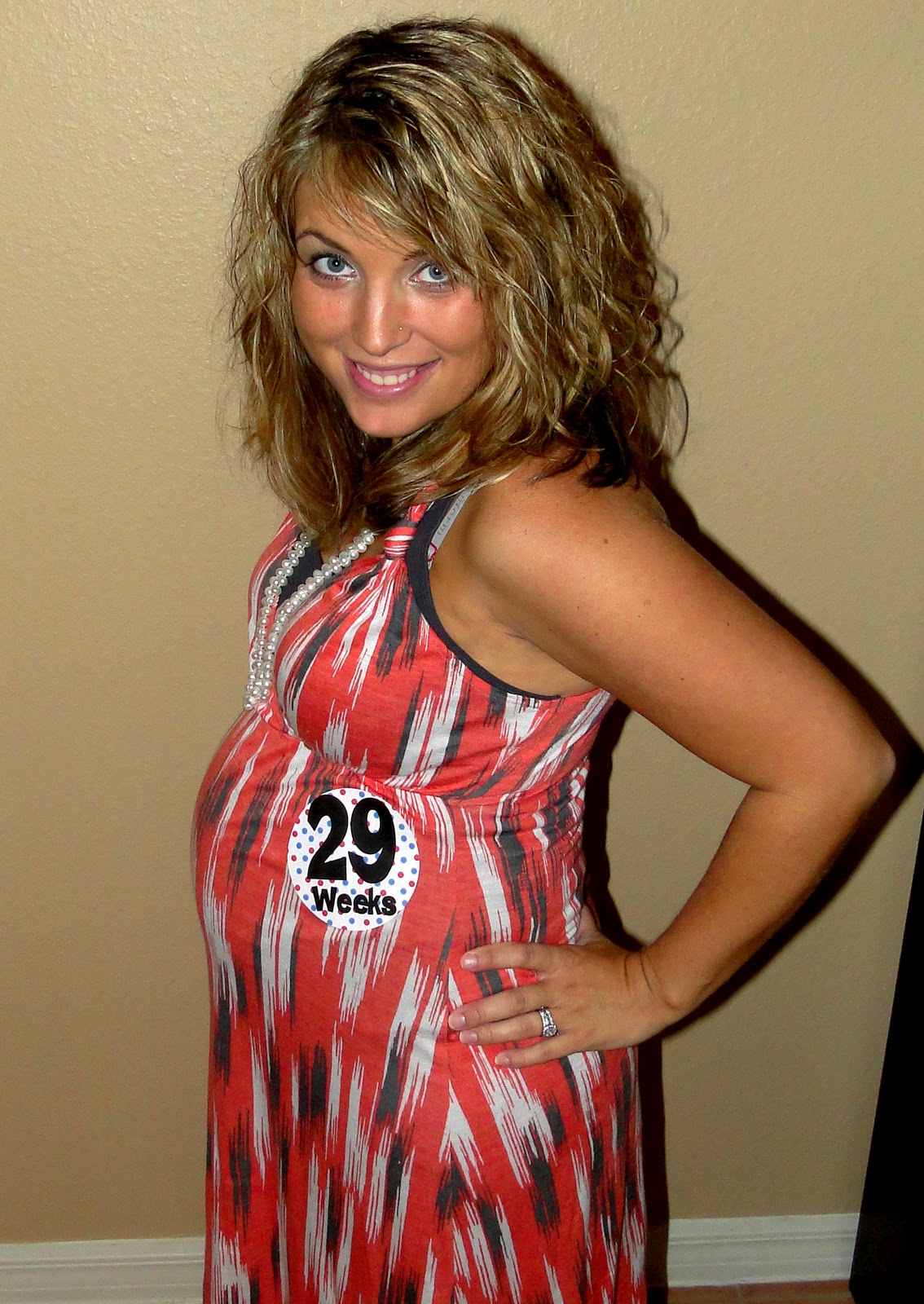 My Symptoms: It was a crazy busy week! I was in Vegas when it started and at Disney when it ended! I was too busy to really notice many symptoms. Wearing the compression hose really helps with swelling and with staying comfortable when I’m active. I don’t wear them while I’m doing stuff – I put them on when I’m resting. I’ve been trying to drink LOTS of water to avoid hurting, stay hydrated, and hopefully not swell.

I’ve noticed that it’s uncomfortable to lay flat on my back for a very long time but at the same time that’s the best way to lay to help my feet not hurt when I’ve done a lot of walking – so it’s tough to get comfortable. I can also tell that the baby is taking up a lot of room in my stomach and making my bladder have less space because if I drink a good amount, then I also pee a LOT more often. I did well flying on the plane ride home but it was tough b/c it was ALL through the night. I didn’t get up and walk as often or drink as much and I could really tell a difference…we have another all night flight home from Hawaii in a few weeks so I’m going to have to set an alarm to wake myself up to make sure I drink and walk more.

I haven’t noticed anymore leakage from my chest…maybe this pregnancy instead of leaking up top I’m leaking more down there?!?! The meds are gone now and I’m still wearing panty liners but they are MUCH better than the breast pads in my bra all the time!!!

Overall, I’m still feeling just as good as I was during my second trimester! I still don’t believe that this baby will be here in 11 weeks or less!!!! Gotta get on it!!!! Now that Disney is behind me I have a few weeks before Hawaii to start knocking stuff off the list!

Weight: Another week with not weighing in…I’ve been eating like a bottomless pit though so I’m SURE the number is gonna jump up. I feel hungry all the time. Interested to see what the scale says on Friday…but it’s hard to care too much when I think I look pretty good ya know? I have to keep reminding myself that the tummy may be cute now, but it’s not cute after the baby arrives!

Gender: Still working on a girl’s name. I think I’ve googled everything under the sun! I find myself always thinking of the baby as a girl. I kinda want a boy more but my gut says girl. As does Zach’s!

Maternity Clothes: Pretty much lived in dresses at Disney and none were maternity ones! I’m still wearing maternity pants/shorts with regular tops but I’m sure those days are quickly coming to an end!

Sleep: I had some ROUGH nights at Disney b/c the walls were paper thin and I could hear people in other condos! I can go to sleep easily, as long as there is NOTHING distracting me. One night last week I actually went up to our guest bedroom to sleep. Zach was snoring some and grinding his teeth a bit so I couldn’t fall asleep. Also once I get woken up I have a hard time falling back to sleep. Like it’ll take me a good 30 min 🙁 I had one super crazy dream at Disney about some guys chasing me in a Vegas casino b/c they wanted to say they’d raped a pregnant girl, then after the did it they cut my legs off to be able to carry me in their bookbags. Um strange and creepy?!?!

Cravings: FOOD. Just about anything!!!!

What I Miss: Nothing…I appreciate how smoothly this pregnancy has gone and how blessed I’ve been with very few symptoms! I really, really pray that ALL my future pregnancies can be just like this one!

Questions/Concerns: My last appointment with Stacy is this week so that is sad 🙁 I’m getting nervous about delivery…not so much the actual delivery but what if my water doesn’t break this time? How will I know I’m in labor? And I wish I could control the time of day that it all goes down…what in the world will I do with Kye? I’m nervous for him to see me in any pain, especially since last time around my contractions were super intense super fast. I’m also nervous for it to happen in the middle of the night or something! I’m also nervous about if the baby is a girl…even though we had nothing when Kye was born we at least at the nursery decorated. Now we have nothing for a girl and no nursery ready either. Kinda feels overwhelming! We have a LOT to get done and I don’t like that feeling one bit!

Goals for the Week: Get stuff knocked off the to do list! Especially house stuff. I want to be able to do a blog open house before the baby arrives and want the house to be DONE for when visitors come meet Blitzen 🙂 Zach’s getting close to finishing the storage shed so that will REALLY help out around here. Zach has to get a few things done this week work wise that make me feel stressed so I’m praying all of that works out for him. We’re home for two weekends in a row so I’m hoping to get a lot accomplished and get with Crissy at some point to take maternity pictures of each other! I don’t want to pay for any (since I won’t be framing them or anything…) but I do want some pictures while I’m pregnant…especially with Kye and us as a family ya know?

Notes from Pregnancy #1: I kinda slacked on my journal keeping…I guess b/c it was the holidays? I have like two days written in for this week then nothing again until 32 weeks. Random? So unlike me! We celebrated Christmas and also attended the Infant CPR class. We didn’t take it too seriously then, since we’d had CPR in college, but I’m very serious about it now. When we go in Nov, Mom and Charlotte are coming too. I think it’s critical that they know what to do if something were to happen to Blitzen while under their care. I just re-read the post I wrote on the class and realized I totally messed up when helping Titus! I did the finger sweep method and you’re not supposed to do that on babies!!! Luckily he wasn’t choking so I didn’t lodge anything further…see why I need the refresher course?!?! We ended 2008 and celebrated New Year’s with Katie (while I was NOT feeling attractive…so different this time around!) and with a list of goals for 2009.