Kye’s 2 year old well visit was on March 21st at 9:45 in the morning. Monday mornings are SUCH a good time for dr. appointments. We had a little longer wait than last time but not too bad. Since the day we found out our baby was a boy (which would be the day he was born, remember?) Zach has been looking forward to/dreading this doctor’s appointment. It’s “THE” appointment where you can guesstimate how tall your child will be as an adult. Supposedly you double their height when they are two and that’s how tall they will be. Being that Zach is almost 6’6″ and I’m barely 5’2″, he has legit reason to be worried. We could have a shorty on our hands pretty easily!!!

I bought Kye some silly band things for his present from my trip to Atlanta and he LOVES them! Great dr office distraction 🙂 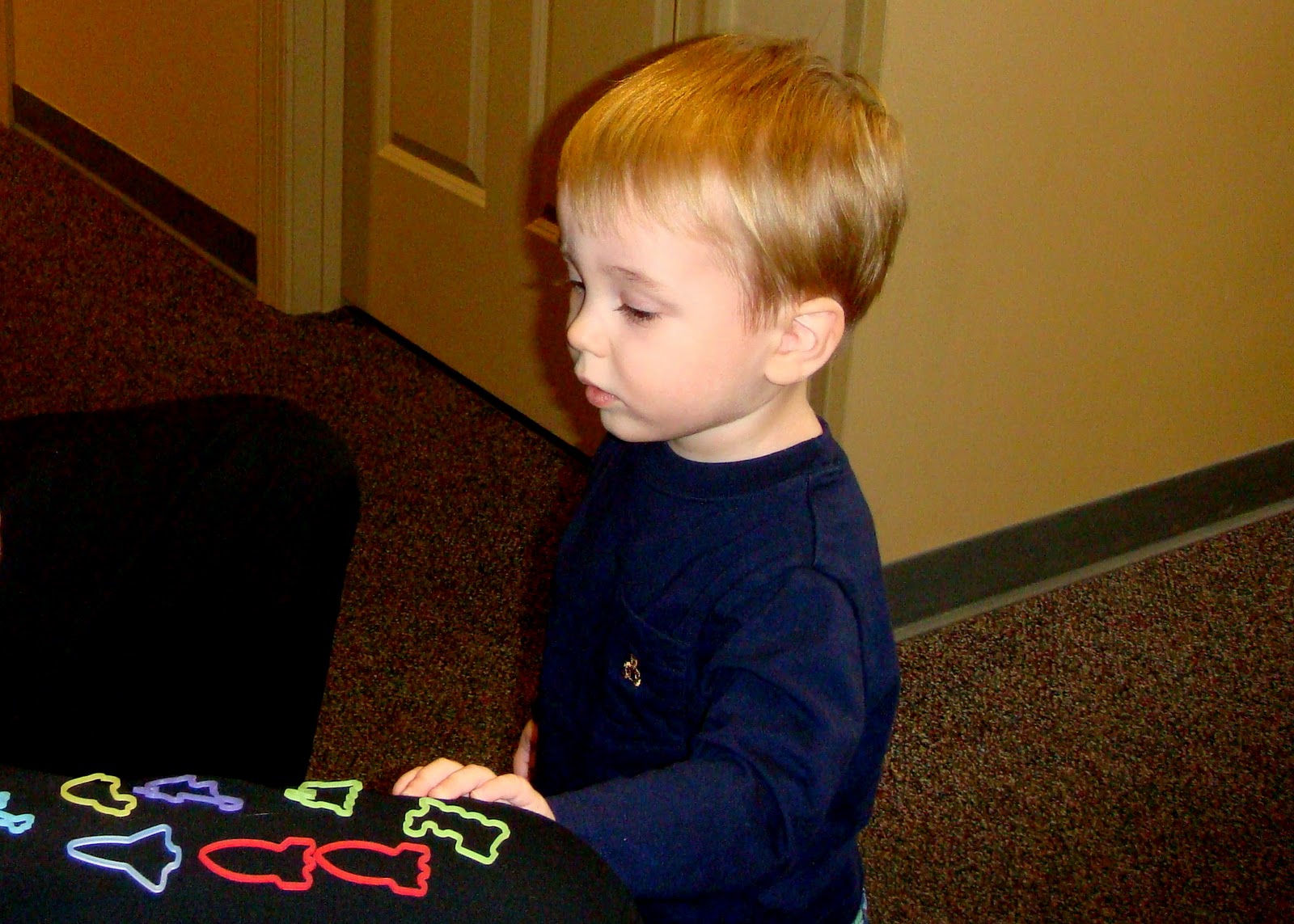 Dr. Griner actually saw us for the visit and he was nice, as always. I am pretty much always impressed with everyone up at his office! We talked about the normal things – how he’s eating, developmental milestones, etc. I didn’t have many concerns but the ones I did have we cleared up right away: 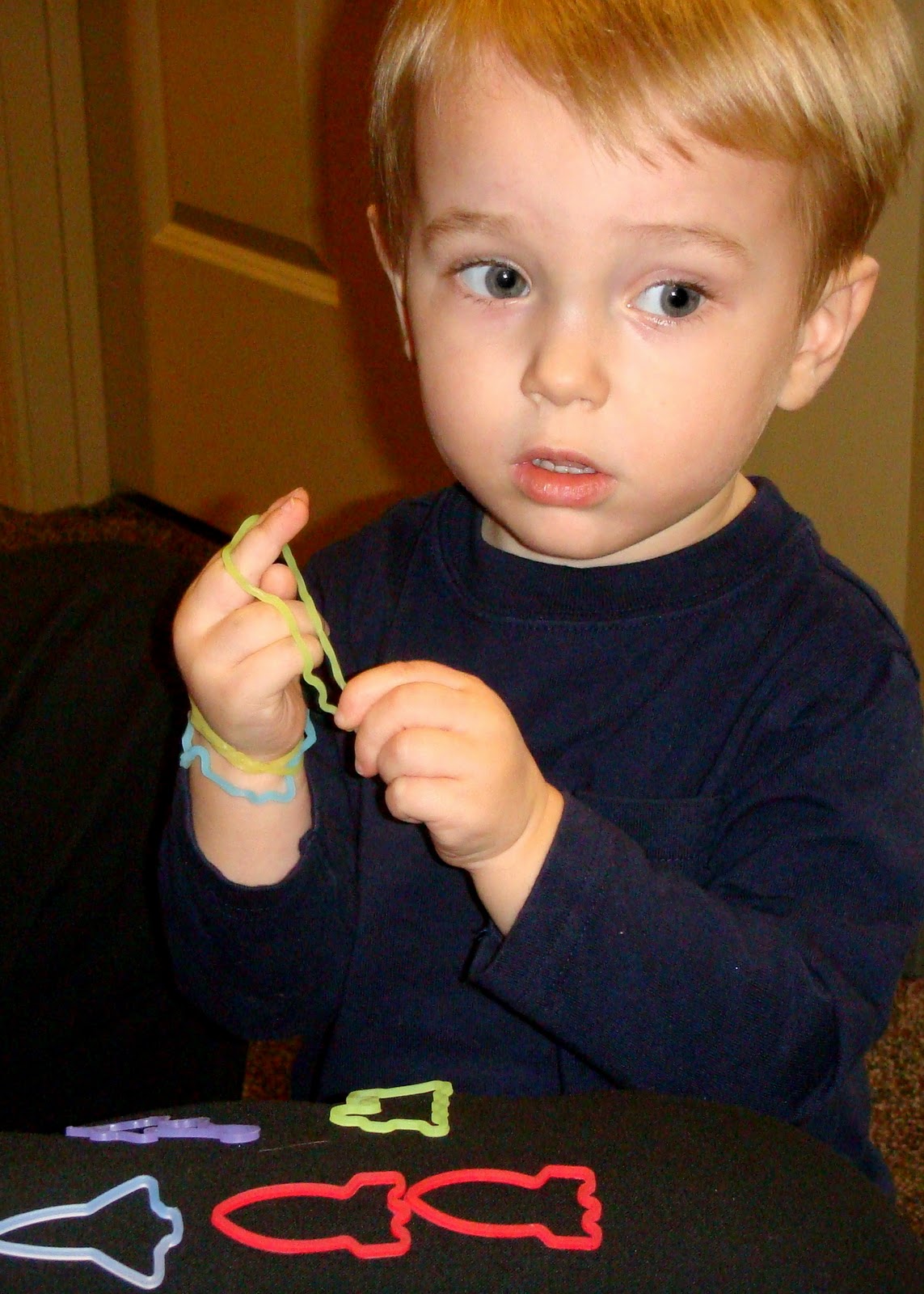 During his exam Kye was AMAZING. He really enjoyed it! Is that even possible??? He opened his eyes and mouth and let the dr check wherever he wanted to like a champ! He had to get his toe pricked to check his hemoglobin and he LAUGHED during it and thought it was funny. No joke! He also had his fifth PCV shot and second Hepatitis A.

His hemoglobin test came back at a 13 (anything over 10 is good!) and that made me feel proud as it’s basically an iron test which directly relates to their diet. Hearing that his diet is on track means I’m doing what I’m supposed to be in that department 🙂 Dr. Griner made me feel SO good as he told us that we are so lucky to have an on-target, perfect, healthy child! It’s not every day you get to hear that so it was enough to leave a smile on my face for a few days for sure 🙂

Here are Kye’s stats for his 2 year check-up. We don’t have to go back until he’s THREE!!! He’s in the 75th percentile for everything (as usual): 28.5 lb (he actually weighed 27.5 at the appointment but since I’d been to the wellness clinic a couple weeks prior and he weighed 28.5 lb then the dr. just said to go with that, 35 inches tall, and head circumference was 19 (I think anyway…can’t really remember!).

I’m not overly worried about it b/c 1) you can’t change it anyway 2) Zach had a HUGE growth spurt in high school and before then everyone thought he was going to be short 3) My dad is 5’9″ and my mom is like 5’4″ but my brother is right at 6′. The doctor said he personally thinks Kye will be at least 6′ but I also think he knew that’s what we wanted to hear haha. 5’10” or 6″6″ it doesn’t really matter…at least we know he won’t be 5’1″ like his mama right?!?!

I was SO proud of Kye’s excellent behavior at his appointment and proud of Zach and I as parents. Of course Kye being healthy is really thanks to God but we play a role in the too by providing him with an environment to be healthy and to develop those important milestones!