Urgent Prayer Request: I mentioned a couple weeks ago to please pray for Titus and the Megow family…right now they are on their way to the hospital again as he’s been having a 20 min long seizure. He’s only 11 months old and Crissy is pregnant so this is extra difficult for her. Please pray that he is okay and that they WILL find the answers they need this time around. He was not scheduled for further testing until July 20th but I hope that they will do the necessary tests TODAY and find solutions. Please lift Seth, Crissy and Titus up in prayer!!!!

One more week left in the first half of my pregnancy! 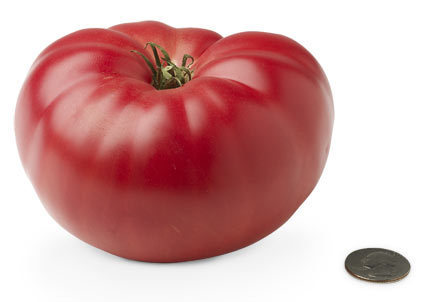 Baby Growth: Blitzen is currently measuring 6 inches from head to bottom, the size of a large heirloom tomato, and is weighing it at around 8 1/2 ounces (ultrasound showed Blitzen was weighing more than that at 17 1/2 weeks so who knows how much he or she is weighing now!). This week Blitzen’s brain is developing specialized areas for smell, taste, hearing, vision and touch. A lot of research has shown that Blitzen is currently able to hear our voices! I’m not one to sit around reading to my tummy, but it’s neat to think that he or she can already recognize our voices 🙂

poor thing looks cramped in there! Belly Picture: Whew! It feels good to straighten my hair after 3 weeks of wearing it curly 😉 Some weeks I look less pregnant than others and I think my pictures last week made my tummy look bigger don’t you? Since I’ll be halfway through my pregnancy next week I plan to post an album on Facebook comparing each week 🙂 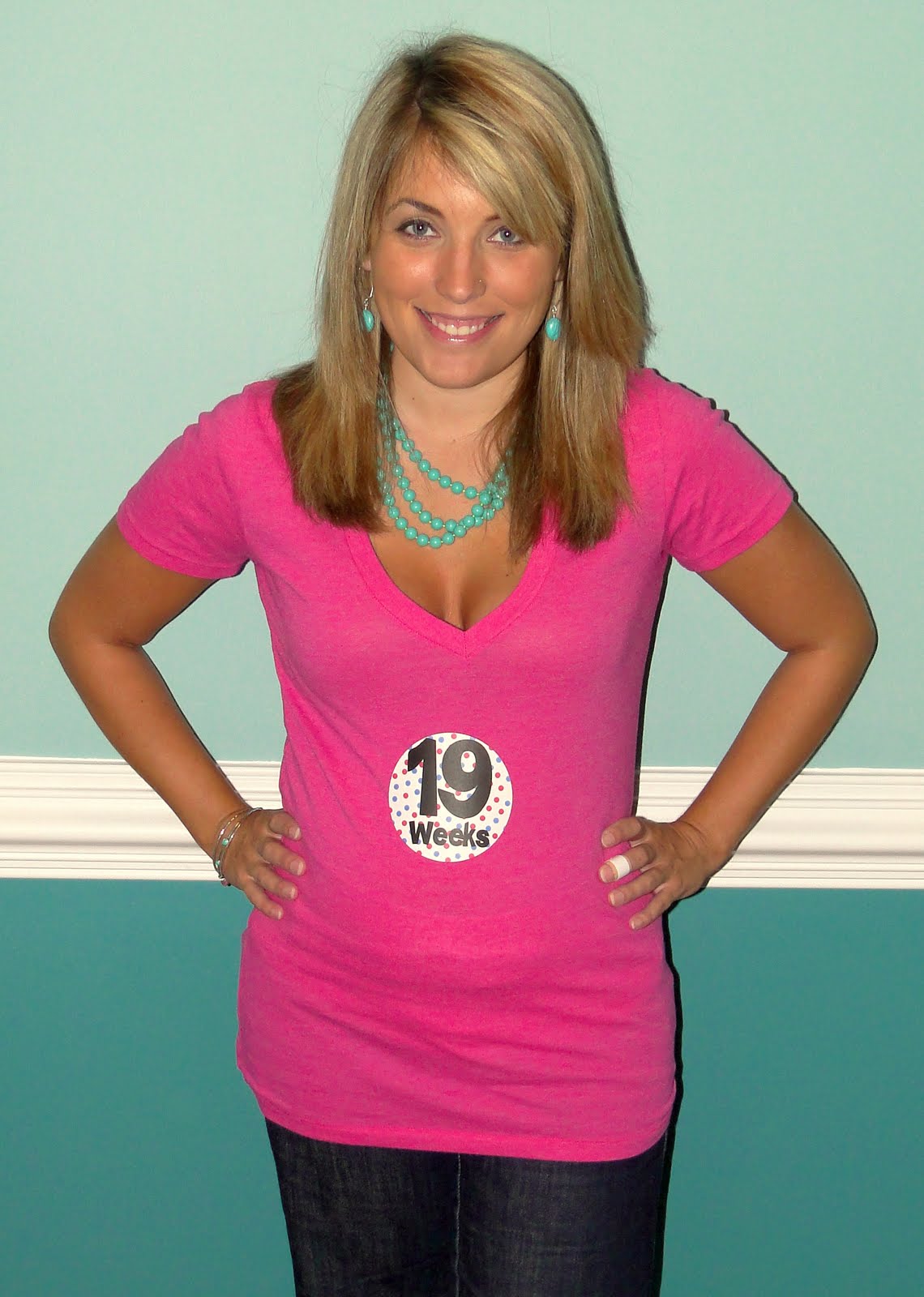 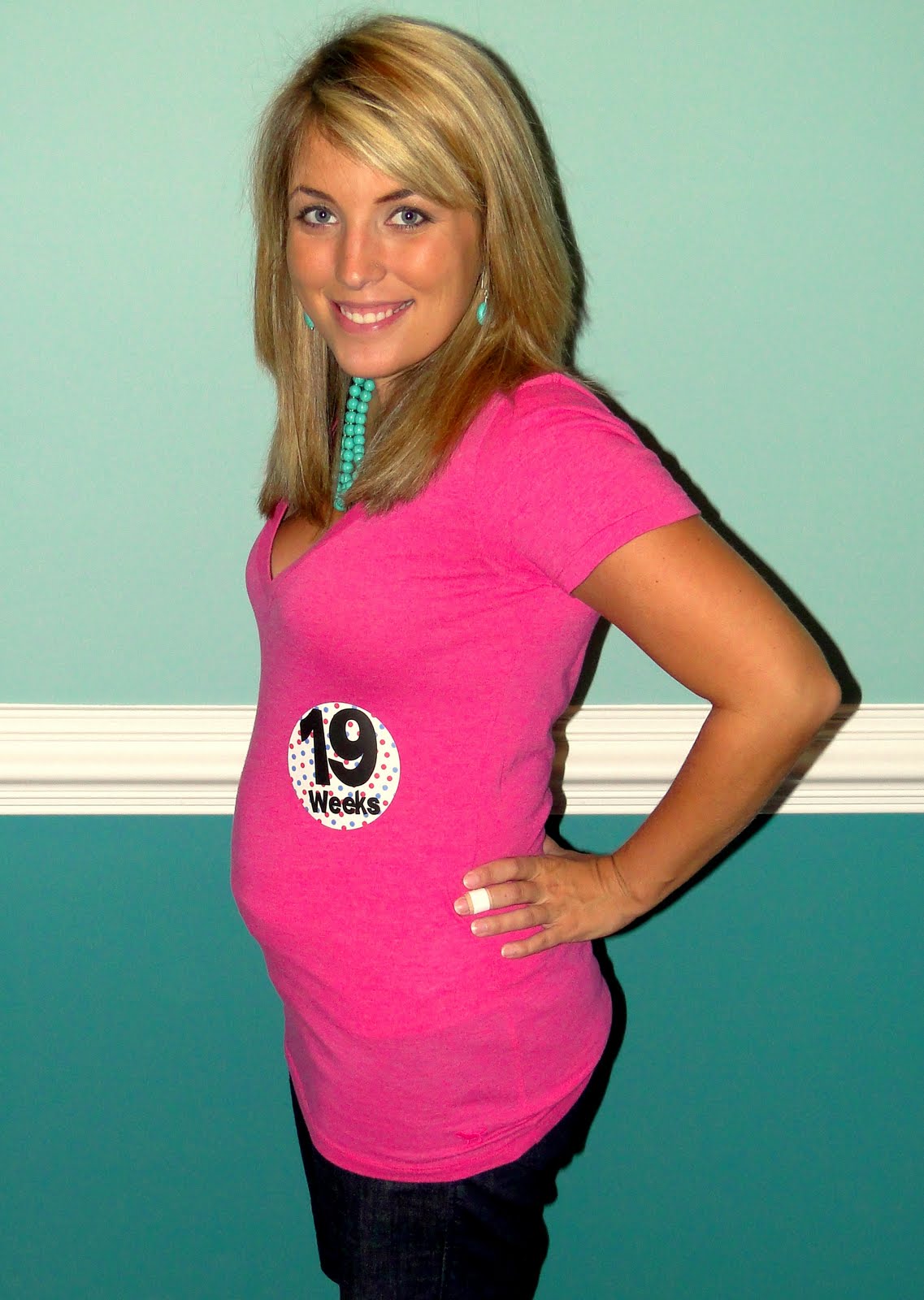 My Symptoms:  A few headaches, but not major ones and I’ve noticed that they are typically from stress or lack of sleep than from pregnancy. So I honestly think, at this point, that they aren’t as bad as they were when I was pregnant with Kye. I do not drink a caffeine drink everyday to prevent them like I was doing there for awhile, but I will drink one with a couple Tylenol if I feel one starting. So far I haven’t taken more than two Tylenol in one day and haven’t touched my prescription headache medicine.

It says on my Baby Center weekly update that it’s normal for the pregnancy mask to start this week and I’m right on schedule. Boo. My upper lip is def. darker which is so aggravating. I’ve also noticed a sun spot I have on my cheek is way more noticeable as well as a few freckles I never even realized I have across my nose. It says that even scars will be more noticeable during pregnancy…interesting huh?

“Pregnancy Brain” has also started to kick in, I’m not forgetting anything major but I really have to have lists or I’ll forget things. Like I’ll run errands (a big deal when you have a two year old) and then forget where all I was supposed to go or what I was supposed to get while there. Annoying! Mostly though I’ll put something down and not have a CLUE where I put it or walk into a room and not know why I came in there.

While I LOVE the look of fuller breasts, so much so that I totally want implants when I’m done with the baby making, I really can’t STAND how sweaty they get. You bigger busted ladies: is it ALWAYS like that or do you get used to it and not notice it? If I even walk outside I get a build up of sweat between them and it’s seriously gross. Making me rethink the whole implant thing and maybe just get a nice lift instead b/c normal Emily boobs don’t sweat like this!

I’ve noticed a decent amount of sharp pain in my lower abdomen and I’m happy to read that it’s normal as it’s simply pain from my uterus growing. It is affecting my “mojo” though…when I was pregnant with Kye I didn’t have much interest in that type of thing but this time around I don’t feel as self conscious or ugly and my desire is higher than before. However, this belly is already in the way…plus my child kicks me every 5 seconds which kinda kills the mood…and I felt a mega sharp pain afterwards which scared me. Any good tips from you mommies who have been there?

Many women get constipated when pregnant but I’m having more #2s than usual! I guess that’s normal? I’m also having a little more discharge than before and have noticed my nipples are “tougher” if that makes sense. Maybe they are preparing for nursing?

Overall I’m ENJOYING this phase of pregnancy…kinda dreading the third trimester b/c I enjoy this energy and being (what I consider) “cute pregnant” but not “huge pregnant!”

Weight: It’s official!!! I’m now GAINING weight! It’s been two weeks since I weighed myself and I’ve gained two pounds (right on target for gaining one pound a week as is suggested during 2nd trimester). I’m now at +1 pound overall. Zach is starting back up with Weight Watchers on Monday and I plan to do the same. Not to lose weight (obviously!) but just to keep track of what I’m eating and make good choices. Michele Duggar did Weight Watchers while pregnant and it helped her to only gain the recommended amount so I’m hoping it’ll just keep me mindful and help me stay on the right path. It’s tough when you’re pregnant not to PIG OUT b/c you feel like you have an excuse since you’re “eating for two.” I just keep remembering how hard it is to lose that weight and how I don’t want to have that struggle again afterwards. I eat when hungry but I don’t eat just because I “can.”

Gender: Kye seems pretty set on this being a “brother” so we’ll see! Still haven’t even DISCUSSED full name options, kinda need to get on that at some point!

Maternity Clothes: Nope! Still bella banding it…but have noticed that my 36C bras are now getting to be too small. I also need new sports bras b/c they aren’t offering enough support. I plan to buy some more loose dresses and skirts to wear b/c they really are the most comfortable and they are something I can wear when I’m not pregnant too!

Movement: I wish I could feel this forever! Even when he or she isn’t moving I can still rub my lower tummy and feel a harder spot where I know the baby is laying. Kinda cool huh?

Sleep: Kye’s cutting his first 2 year molar this week…so he hasn’t been sleeping as usual. Which is HARD. He has only woken up 1-2 times a night but it’s a struggle for me. Um, newborn…middle of the night feedings…not too pumped for that!!!!!

Cravings: I did cave in and make coco-no-bakes again this week! I’ve been dealing with some hurt and I tend to be an emotional eater. It was the first true I-HAVE-to-have-this-NOW craving that I’ve had this pregnancy. I tried and tried to ignore it but Blitzen was persistent! I did give a bunch of them to Crissy so I don’t feel as guilty about it 🙂 I know many of you have asked for the recipe so you can read it HERE to make your own!!!

What I Miss: Nothing, but I am nervous about having TWO kids. Not the logistics so much but more the image of it. Sounds horrible right? But, to me, when you have more than one kid then there is no way of mistaking it…you’re a MOM. I feel too young to be a “MOM”. Next thing you know I’ll be wearing jeans as high as my boobs, driving a van, and having those family decals on the back of it with an image of a daddy, mommy, kids and pets…

Best Pregnancy Moment of the Week: Feeling movement is my FAVORITE thing. I tried to get Kye to put his hand on my belly to feel it and he was not having it. “Do you want to feel the baby kick?” “NO MA’AM!” Maybe sometime he’ll show interest! I do love that he prays for the baby on his own and that he whispers when other people are sleeping. We went to my mom’s because all my family stayed the night there and when we got there everyone was still asleep and he did SO good being quiet. Hope he can get used to that being an all day thing haha!

Questions/Concerns: Intimacy positioning help to avoid pain afterwards, good toys to invest in for Kye to keep him occupied while I’m nursing a million times a day (glad this baby is due near Christmas so I can load Kye up with new stuff!), any Disney tips still! Also need ANY advice on this birth plan I need to write – anything you did/had happen that you would suggest I do? Anything you wish had been different?

Goals for this Week: Zach ended up working from 7am-10pm 3 days this week so a lot of my plan making went out the window, hopefully next week I’ll see more friends! I did cook this week for a change and that was nice (even though I didn’t eat a single bite of it…). House is still clean 🙂 I still have the goal to continue catching up on blogging, get going on Zach’s upcoming birthday, and crack open some BRADLEY!!!!

Notes from Pregnancy #1: At this point last time in my pregnancy I’d gained 7 lb so I’m still doing good on that front (here‘s what my belly looked like at the same stage last pregnancy)! I am having more back pain this time than last time though (I hadn’t had any yet at this point) but my headaches were worse. No one could tell I was pregnant yet, which is the same case now (I got hit on TWICE last week…um AWESOME!!!!!). We met some strangers at the airport in California and told them our baby names and they are the ones who suggested spelling Kye K-Y-E. Kinda funny that they decided that for us b/c at this point we were still undecided 🙂 I felt Kye move for the first time (and I knew for SURE that’s what I was feeling) and I also started to think about ways to organize our house for the baby. I also got fitted for a new bra and went from a 34C to a 36D (I probably need to go get measured again soon!).