We headed into town on Saturday so we’d be able to be at Uncle Spear’s Visitation. It was at a beautiful funeral home and the line of people went through the doors and down the street! Uncle Spear touched so many lives as was obvious by the huge turnout at both the visitation AND the funeral on Monday. I also thought it was so sweet of Aunt Cheryl and the girls to include ALL the family in the visitation line. Typically I only see immediate family in the lines but it was nice to get to stand up there with everyone and thank all the people who came to show their support.

Due to Easter they had to schedule the funeral for Monday. It was at Berea First Baptist Church and the people there were some of the nicest people ever! They provided food for all of us before the services and it was so nice to visit with everyone and enjoy a meal together. Kye at that point was at his limit. We had pushed him a little too hard over the weekend. I wanted to spend as much time with my family as possible so he went down late for a couple naps and got to bed late without a bath both nights (no worries though we bathed him Monday morning!). I felt so bad for him and a little embarrassed as well as he was pretty fussy. Not fun!

The funeral was at 1:30 and Kye naps at 1 so we gave him a little Tylenol (he’s teething and it helps!) and let him have the paci and the monkey at 1 in hopes that he’d fall asleep for the service. It was so precious that Aunt Cheryl wanted to cuddle up and rock him. It was nice for her to get some quiet time alone and Zach snapped a couple pictures of her loving on Kye! 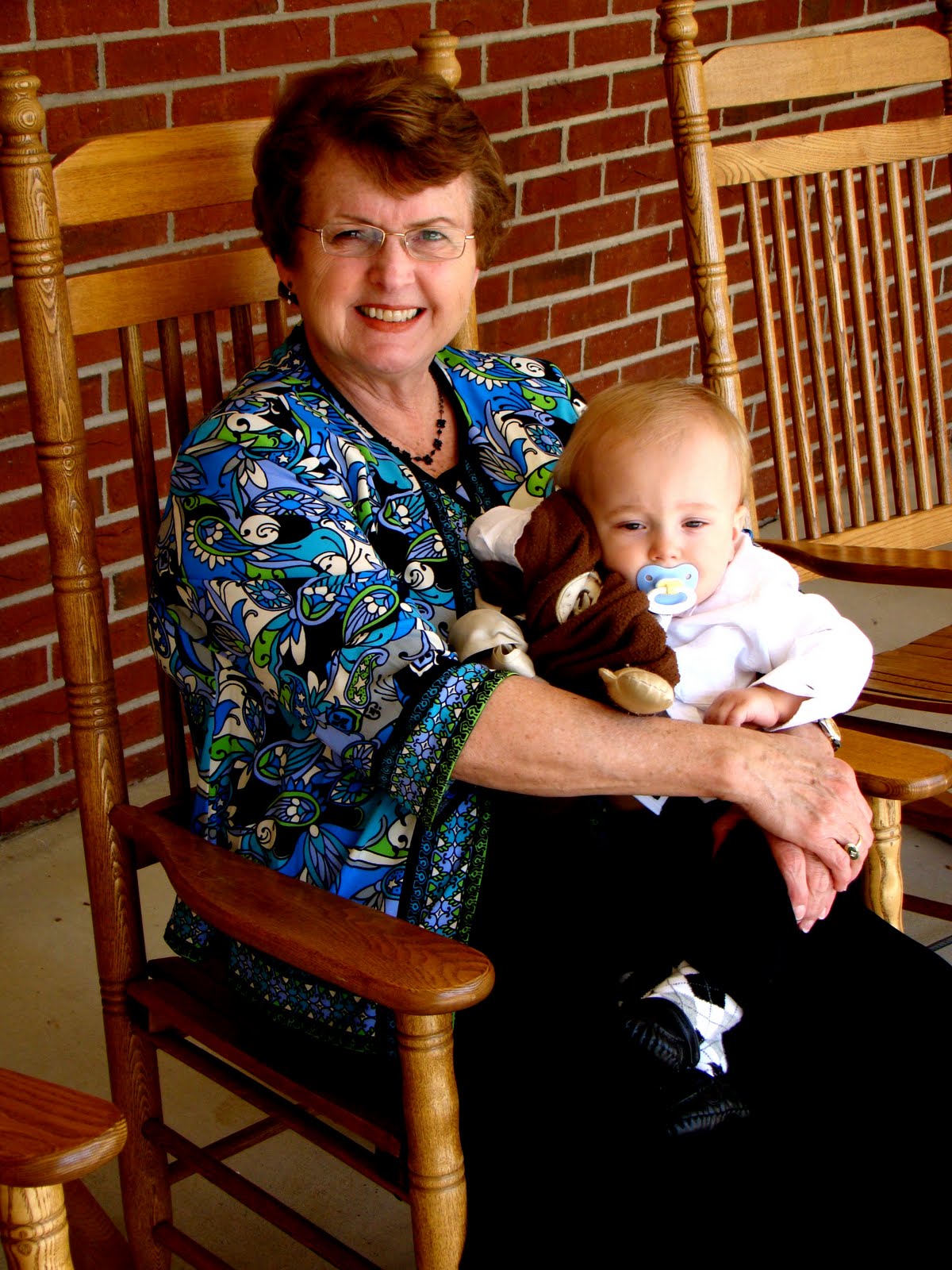 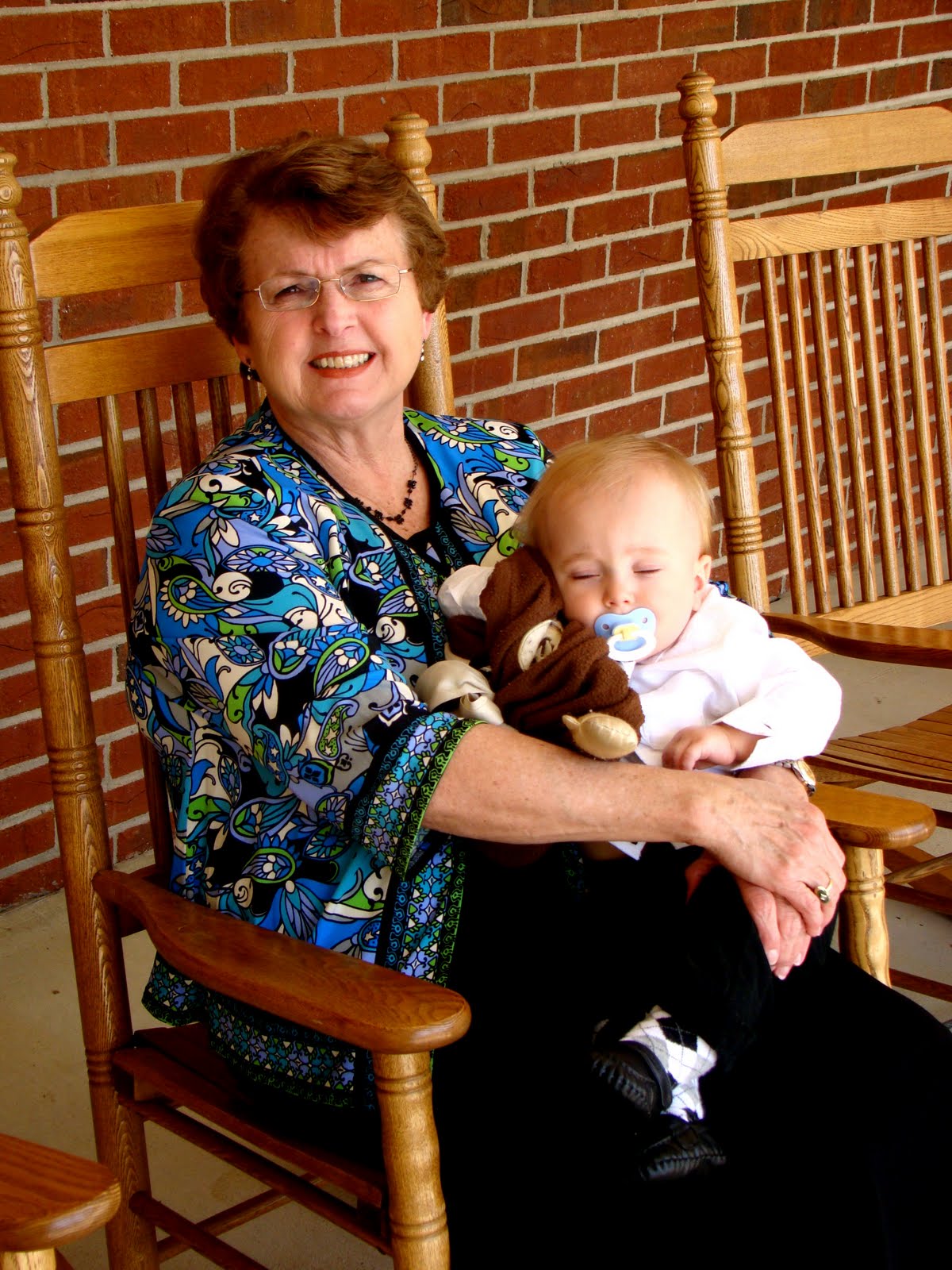 The service was amazing. It was by far the nicest service I’ve ever been part of! The auditorium was packed full of people and it was so neat to see all the football players who came out! Uncle Spear worked as the Furman University Equipment Manager for over 20 years and he was very involved in the player’s lives. Several people spoke and did an amazing job. The main speaker (Dr. Vaughan) talked about all the different lessons Uncle Spear taught all of us and it was so inspiring. Uncle Spear was always positive. He would say “PMA” which meant “Positive Mental Attitude.” He was all about choosing to be positive in all situations. Like Dr. Vaughn said, Uncle Spear believed you could never be too tired to do the right thing. He was a man who loved everyone and wanted to always be helping others. When Dr. Vaughn talked about how Uncle Spear saw potential in people and helped them meet that potential I lost it. It felt like he was speaking directly to me!!! Uncle Spear really did see my potential and I appreciate that so so much.

Another speaker, Mr. Pettus, said a quote which I loved: “When you were born, you cried, and the world rejoiced. Live you life in such a manner that when you die, the world cries and you rejoice.” This is so true and it’s something that Uncle Spear did so well! When they discussed the disease which took his life they mentioned that to Uncle Spear everything he went through was worth it if it helped save ONE soul. Isn’t that so awesome? I hope someday that I’m a strong enough Christian to feel the same way. I also hope that through Uncle Spear’s amazing strength and faith that someone’s life has been touched and that someone has found the love of Jesus!

At the end of the service the United States Marine Corps honored his life and presented Aunt Cheryl with an American flag. I’ve never witnessed a military honor type thing and it was so touching. Zach said that he even cried during that part…I don’t think anyone had a dry eye! It was beautiful and it made us all so proud of Uncle Spear. He served two tours with the Marines during Vietnam. I always think of him as a silly, goofy guy so when I was watching the marines performing the ceremony it was hard to picture Uncle Spear being that serious! I’m sure he was a great marine though as he was such an amazing man.

Poor Kye didn’t behave so well during the service so Zach ended up taking him out (but he could still watch on a TV thankfully) but Kye did fall asleep in his arms 🙂 I was glad Kye wasn’t being disruptive but I also wish Zach could have been with me. It was very emotional for me. I think with Nana’s funeral I wanted to be strong for my mom so I held in all my emotions. Plus Nana was older and I felt that she got to live a full life. Uncle Spear was only 65! And he was SO healthy. It just seems so unfair that he didn’t get to finish out his life here with all of us. Since Dad has Audrey and Brandon has Chrissy, my strength wasn’t really needed so I was able to let go of my emotions. I wished Zach could have been there to hug me but such is life with a baby! It was probably good that Brandon and I couldn’t see Dad from where we were sitting. We both remember his tears during Grammie’s funeral (I was 10 and Brandon was 7 but we’ll never forget it!) and it bothered us so much. I think all of us think of our daddies as “Supermen” who are supposed to always be strong and it’s difficult to see them in moments of weakness. Seeing him upset would have only made Brandon and I more upset and it would have probably been pretty bad if we were any more upset!

Afterward all the family gathered together outside the auditorium and again got to meet people and thank them for their support. Several people left from there as they had to get back but we wanted to spend a little more time with everyone so we headed back over to Suzanne and Todd’s. Their house was COVERED in flowers! I never really realized how much of a wonderful gift flowers are until I went to buy flowers for someone and found out how much they cost…omg…so so so expensive! Zach’s parents sent a pretty plant and Mom sent some beautiful flowers. It was so pretty seeing flowers everywhere and so amazing to see the outpouring of love from the community. There was enough food to last them for weeks! You can also see how loved he was in the community by reading all the different articles about him!!! There were several great ones and I can’t find the link to my favorite but here is a different one as well as a link to his obituary. 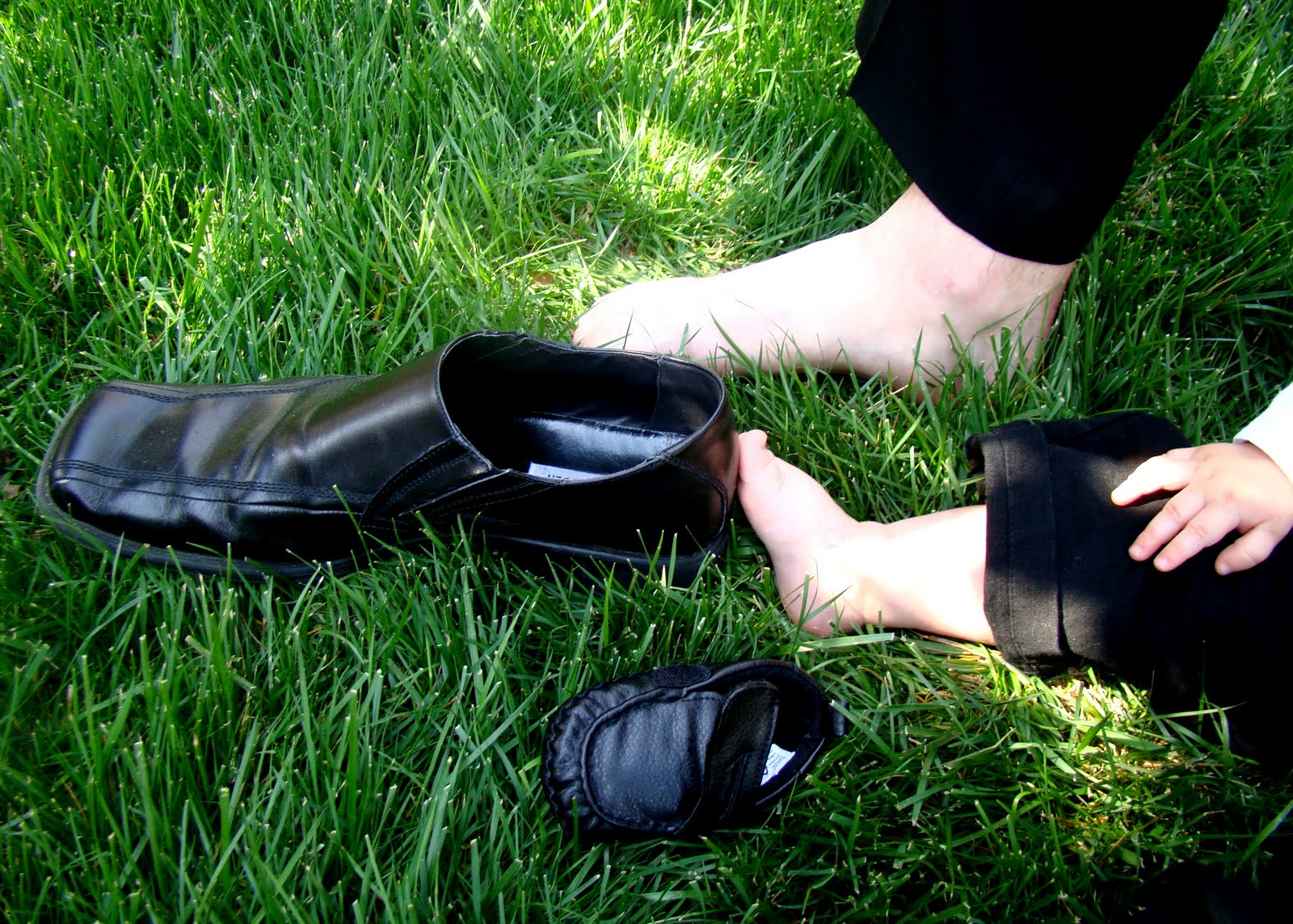 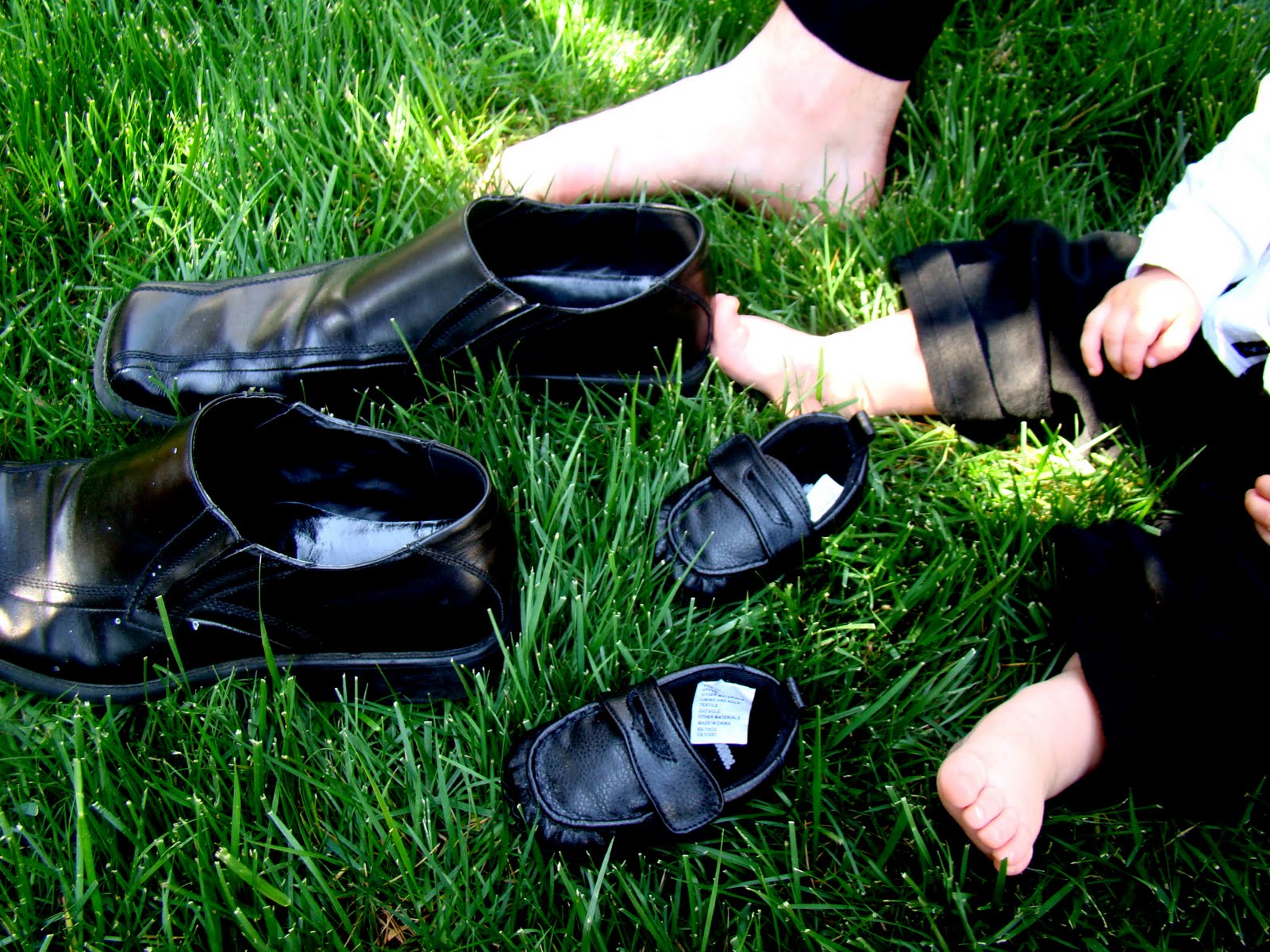 I don’t think anything could have gone better. While it was a difficult experience for us all, it was also a wonderful one. We all got to be together to honor the life of a man we all loved very much! I’m thankful over and over that Zach and I (and Kye too) were able to be there for that and it’s a weekend that will always stay with me. I got the chance to give Aunt Cheryl a good hug before we left and I’m so glad she’s surrounded by her daughters and their families during this time. Times like these remind us ALL the importance of family and how blessed we are to be part of such a great one!