Friday morning (Oct 1st) we checked out of Big Canoe then drove down to Atlanta to meet Mrs. Charlotte. We met her (along with Casey and Jordan!) at Chick-Fil-A for lunch and to let Kye run around then she drove him back with her to Valdosta for the week. It was going to be the longest I’ve been away from Kye ever and it made me so sad. I actually cried a little bit! Can you believe that?!?! He is just such a little person now and his personality makes it tougher to leave him. I knew he’d have fun with Big Papa and G-Mama and I knew Zach and I would have a fun time together at the wedding and in Jamaica, but it was still hard.

After we left Chick-Fil-A we headed up to Rachael and Greg’s house where we were staying for the night (post to come!). We stopped on the way so I could tan (since laying out at Big Canoe was impossible) then showered and got ready for the rehearsal and rehearsal dinner!

Zach had to have a Quick-Trip fix 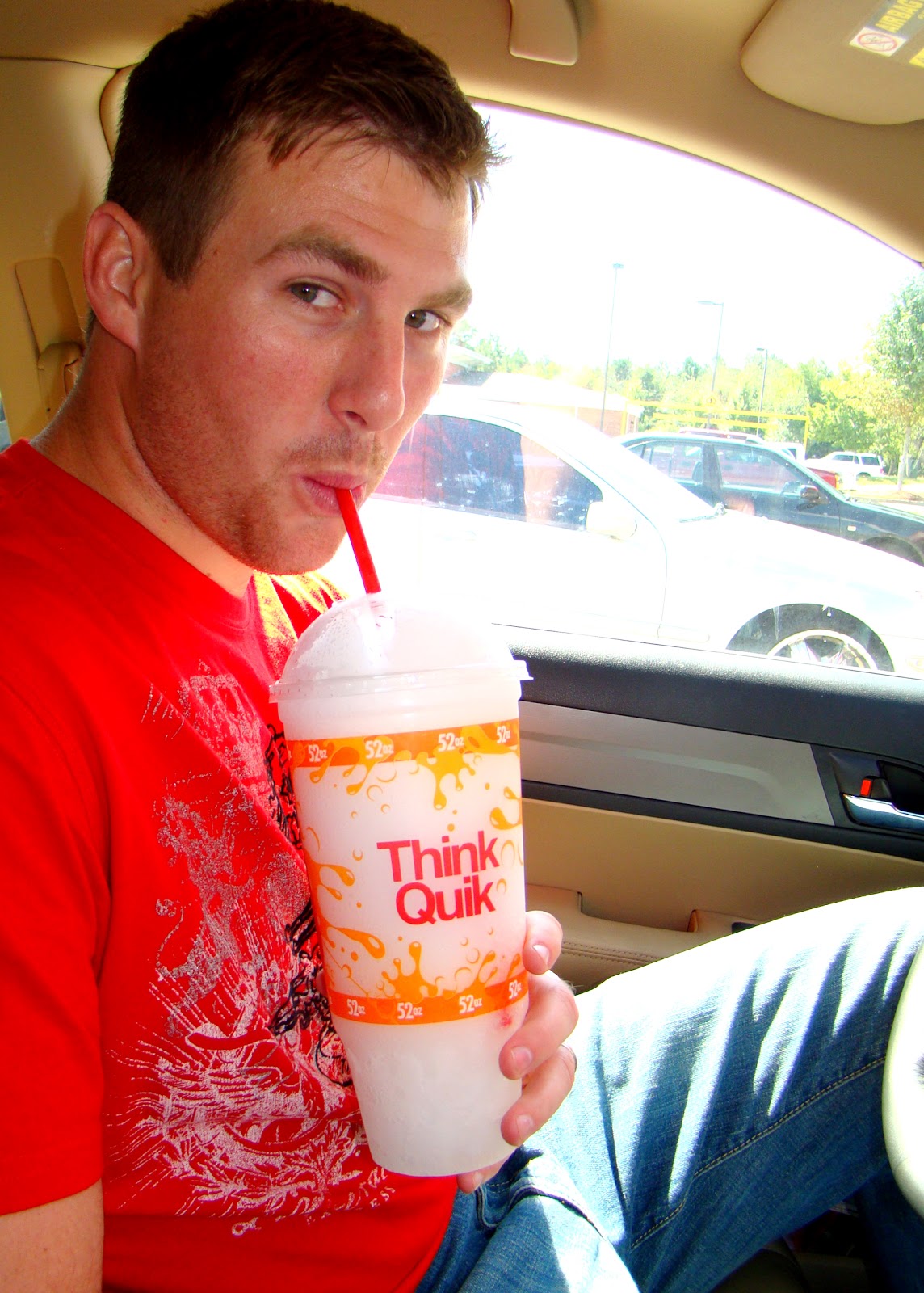 The rehearsal went really well and it was GREAT getting to see all the lovely ladies again! I seriously didn’t meet any of the groomsmen haha. I had met Danielle’s brother, who escorted me down the aisle on the big day, but otherwise I didn’t really know any of them! Us bridesmaids stuck together I guess 🙂 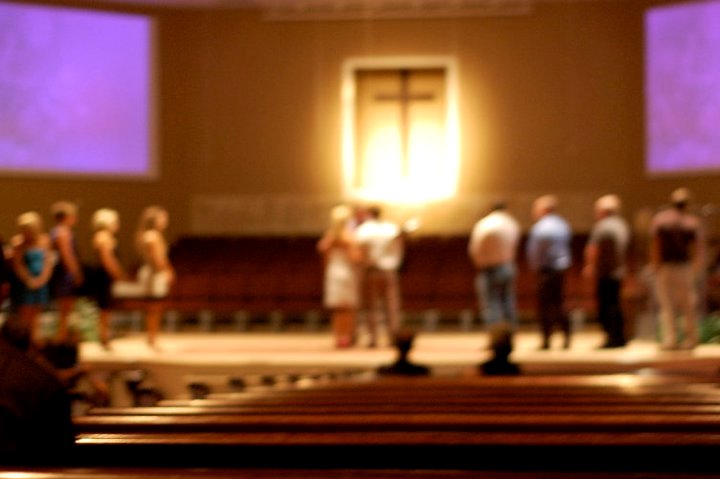 They had the rehearsal dinner at the church which was nice as we were HUNGRY and didn’t have to drive anywhere to eat. They did a low country broil (or is it boil?) and (shocker) it was my first time eating at one. The food was AWESOME though, for real!!! One of the funniest moments of the night was when we all went to sit down and I was talking to Ryan (Dana’s husband) about where to sit. Since he and Zach had sat together during the rehearsal I figured they had bonded and would want to sit together so I told Ryan I’d let Zach sit by him so they could talk. His response? (Keep in mind that this was Zach’s FIRST time meeting Ryan…) “You mean Zach will talk and I will listen.” Hahaha It’s hilarious b/c it’s true!!! 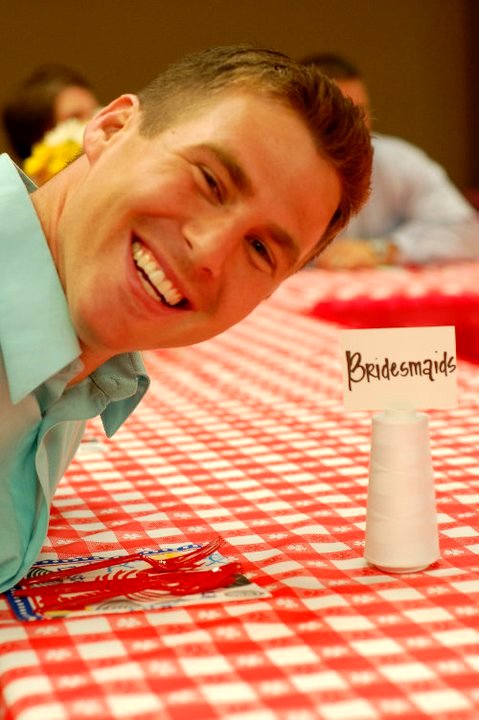 Thanks Dana for these pics too 😉 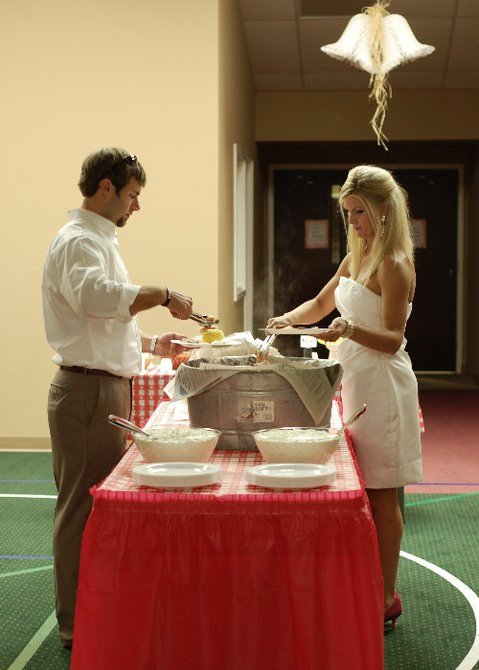 “YUM! This yum-yum sauce is yummy!” 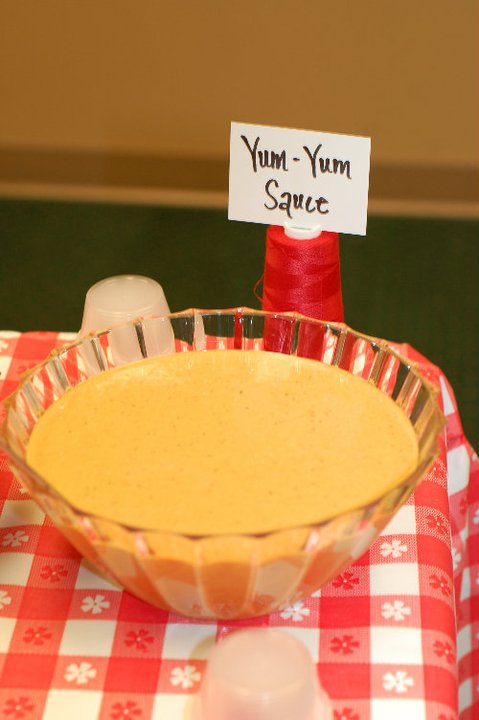 After the eating wound down (and we scarfed down on some mega delicious cupcakes) they had an open mic for people to say something if they wanted to. Laura and I had previously decided that we’d talk but omg I was so nervous! I had note cards all written up and prepared but on the way to the church Zach made me throw them away. He told me I sounded like a school project so I just winged it and kinda covered what I’d hoped to say. I guess it went okay? I didn’t hear too many laughs at my attempted jokes so maybe it was a tough crowd (that’s what I’ll keep telling myself anyway…). Danielle’s brother also spoke and he was hard to follow as he prepared such a sweet little speech and it was just precious to see how much he loves Danielle and Jonathan too. It’s so great to see the families so excited for their special day!

My boobs are too small to hold up my dress, boo 🙁 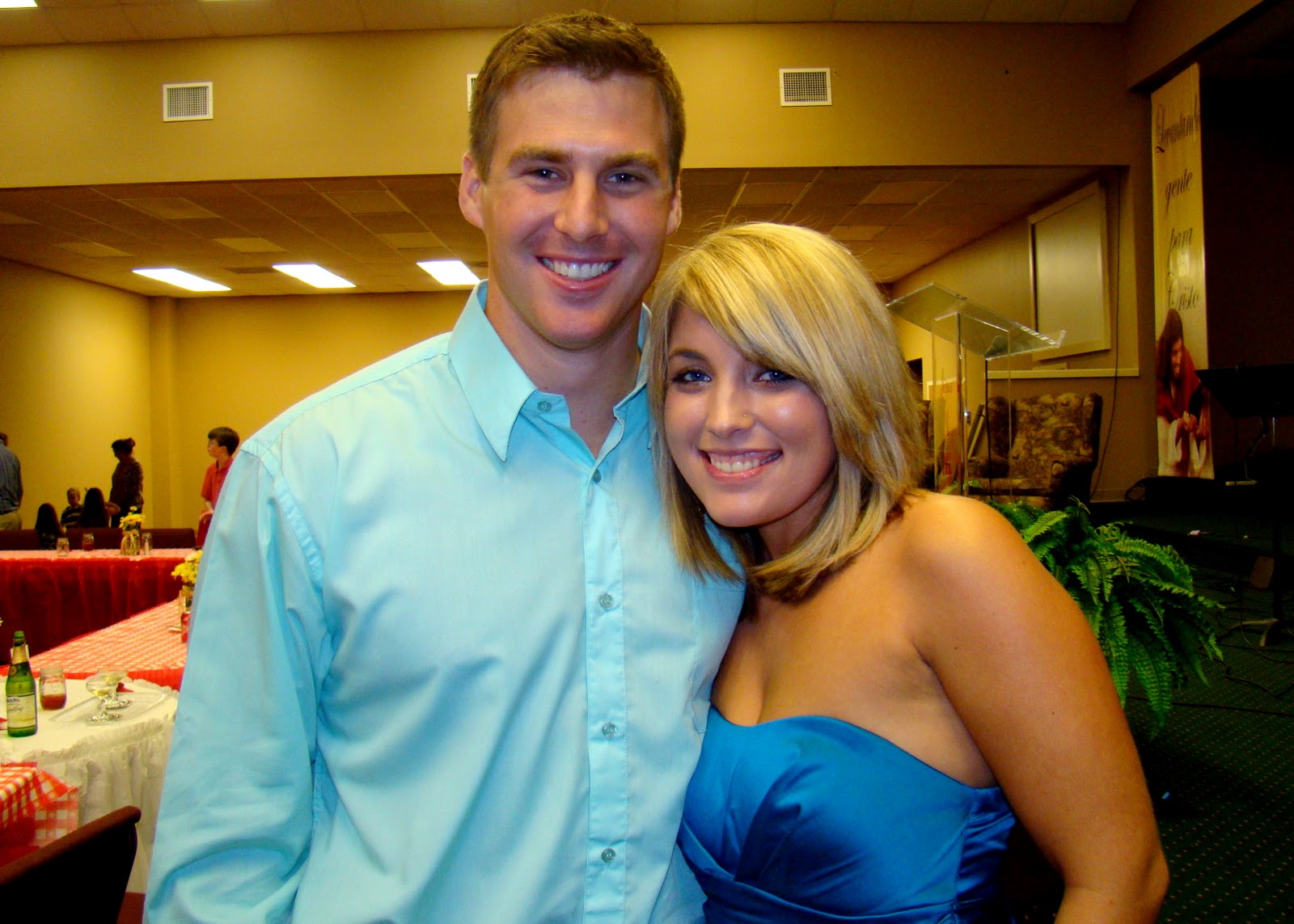 The professional photographer with her assistant 😉 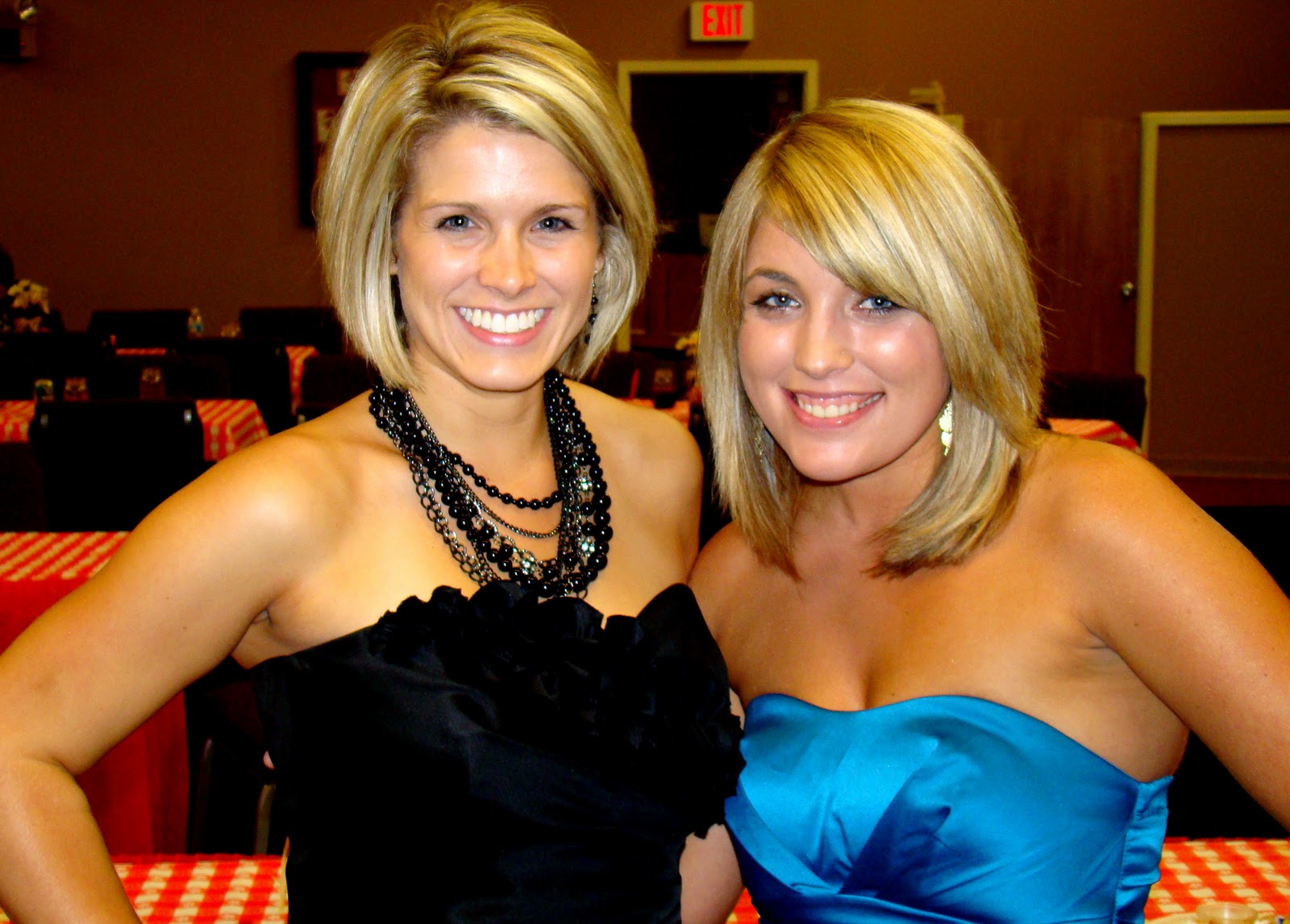 We were teaching Chelsea some of my skills for lookin’ good in photos! 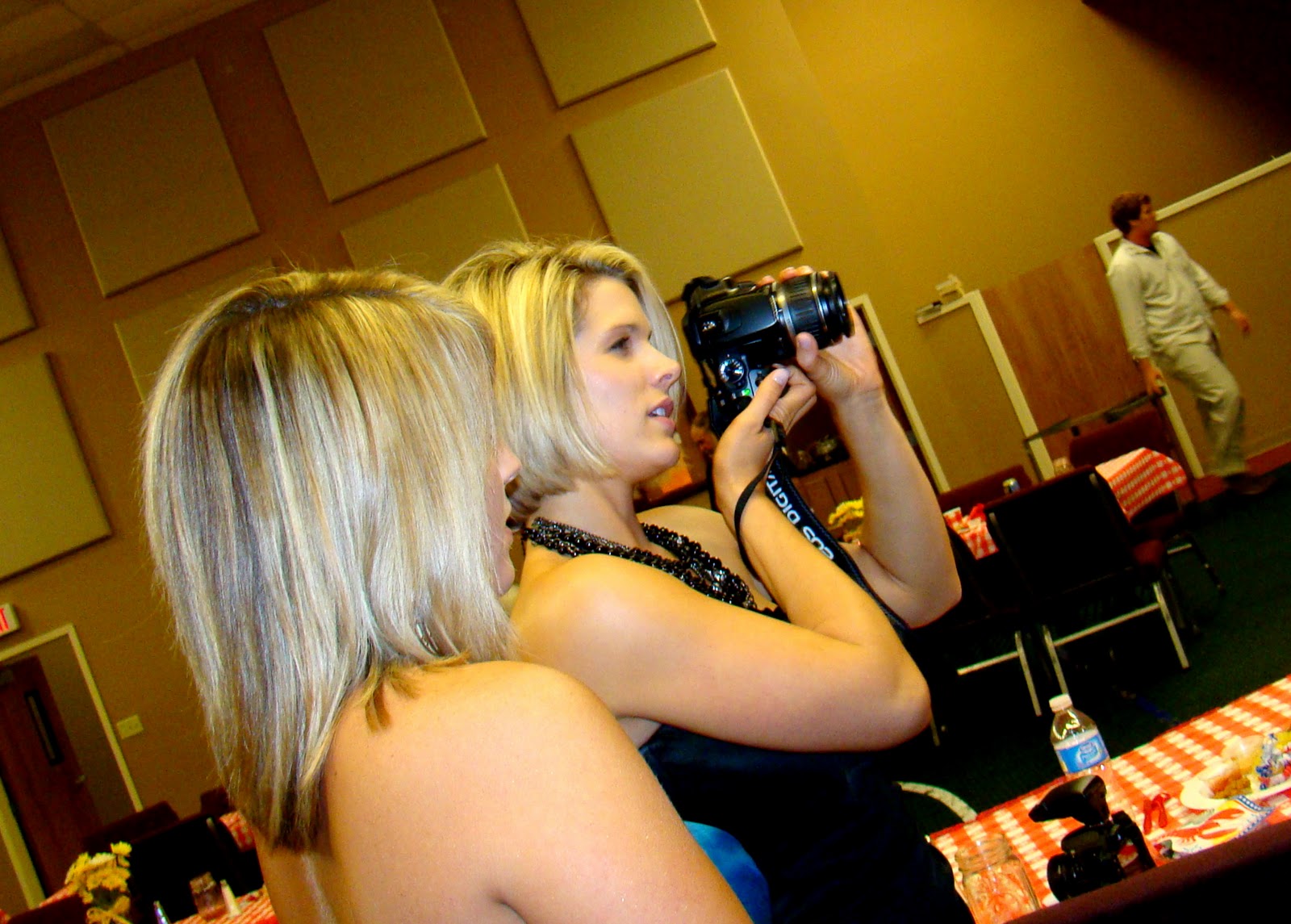 the student with the teacher (and didn’t my teaching pay off…beautiful pic of you Chelsea!) 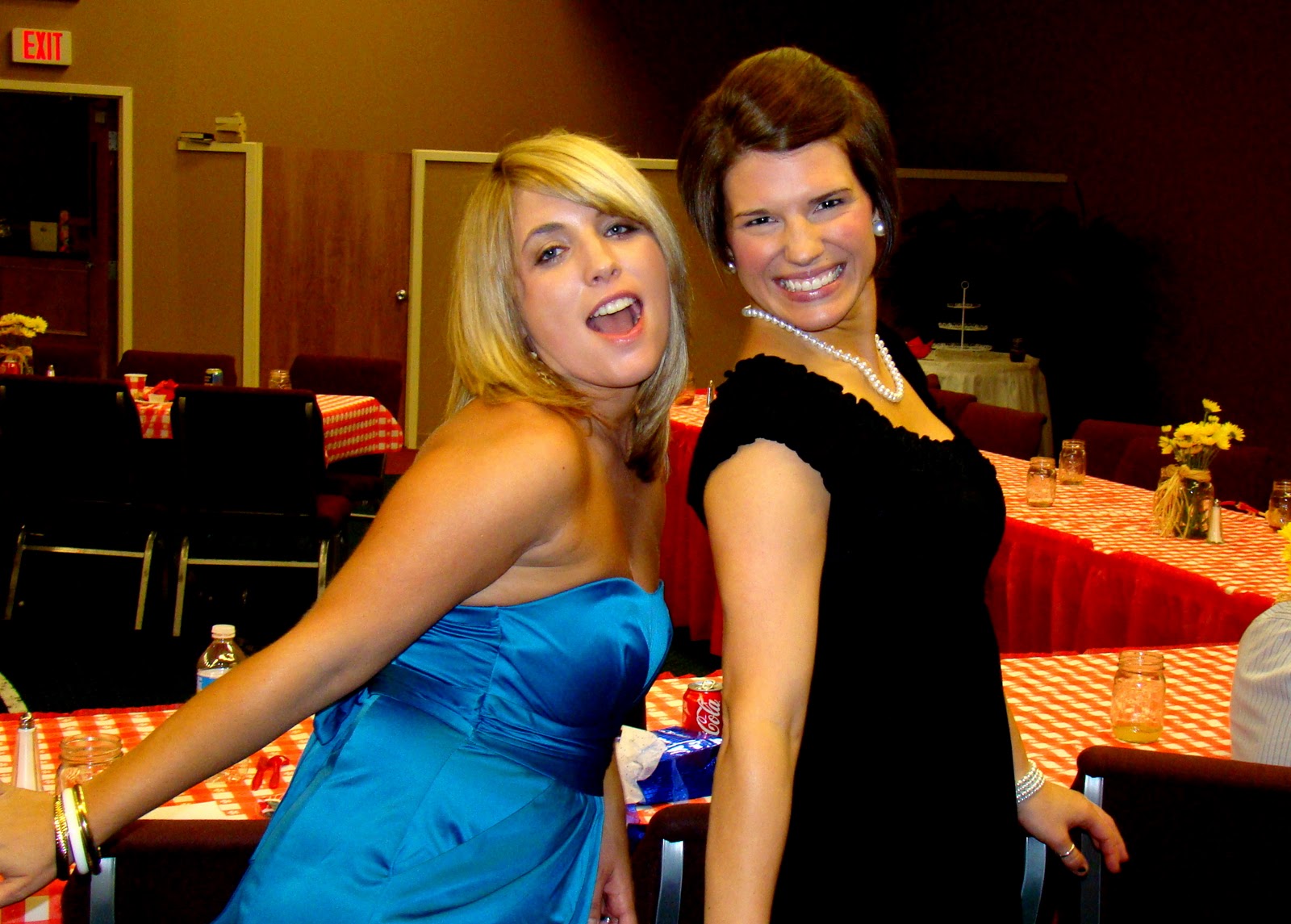 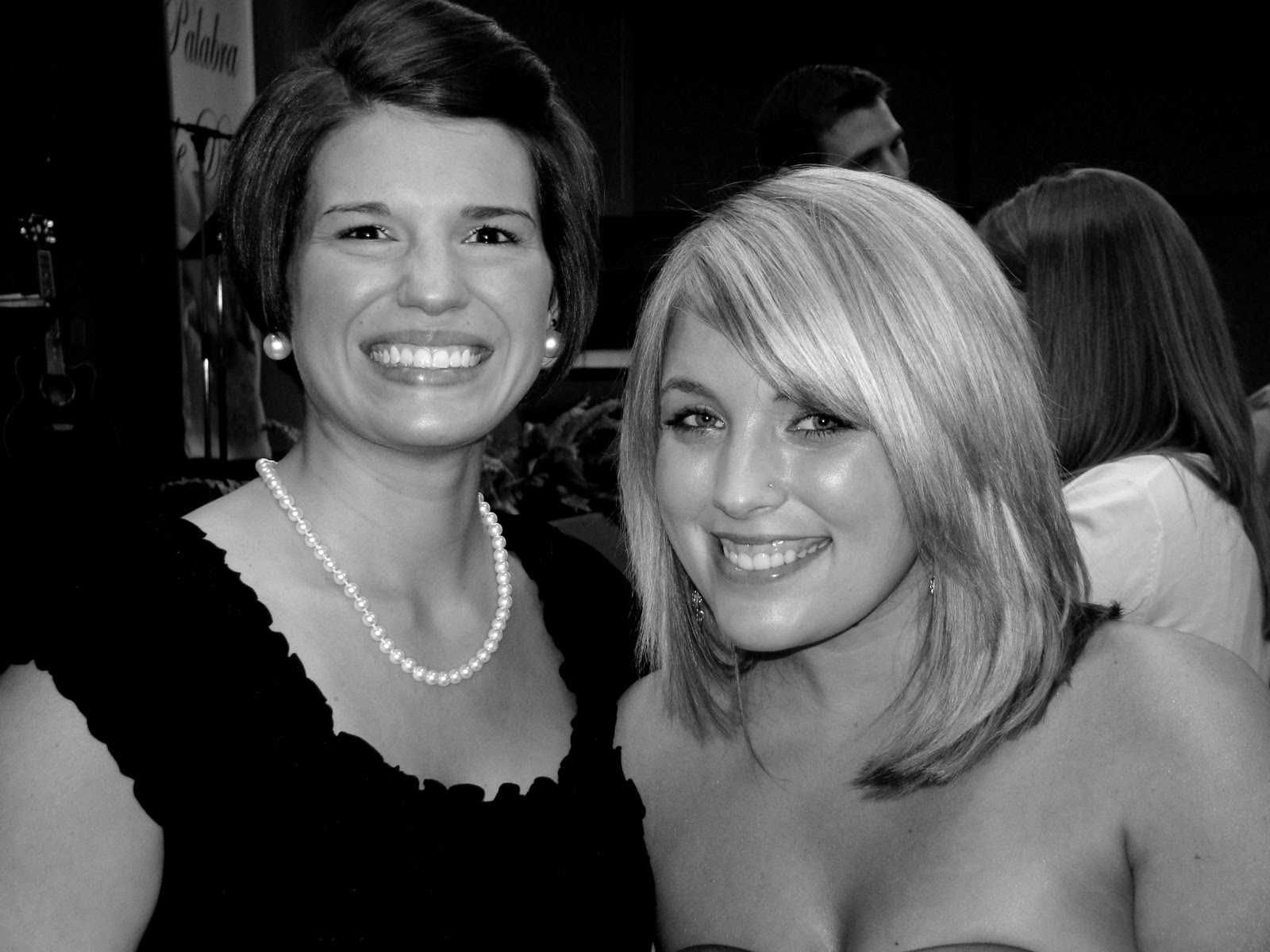 I LOVED Danielle’s dress for the rehearsal dinner, and these glasses were the ones Jonathan’s parents used in their wedding – so sweet! 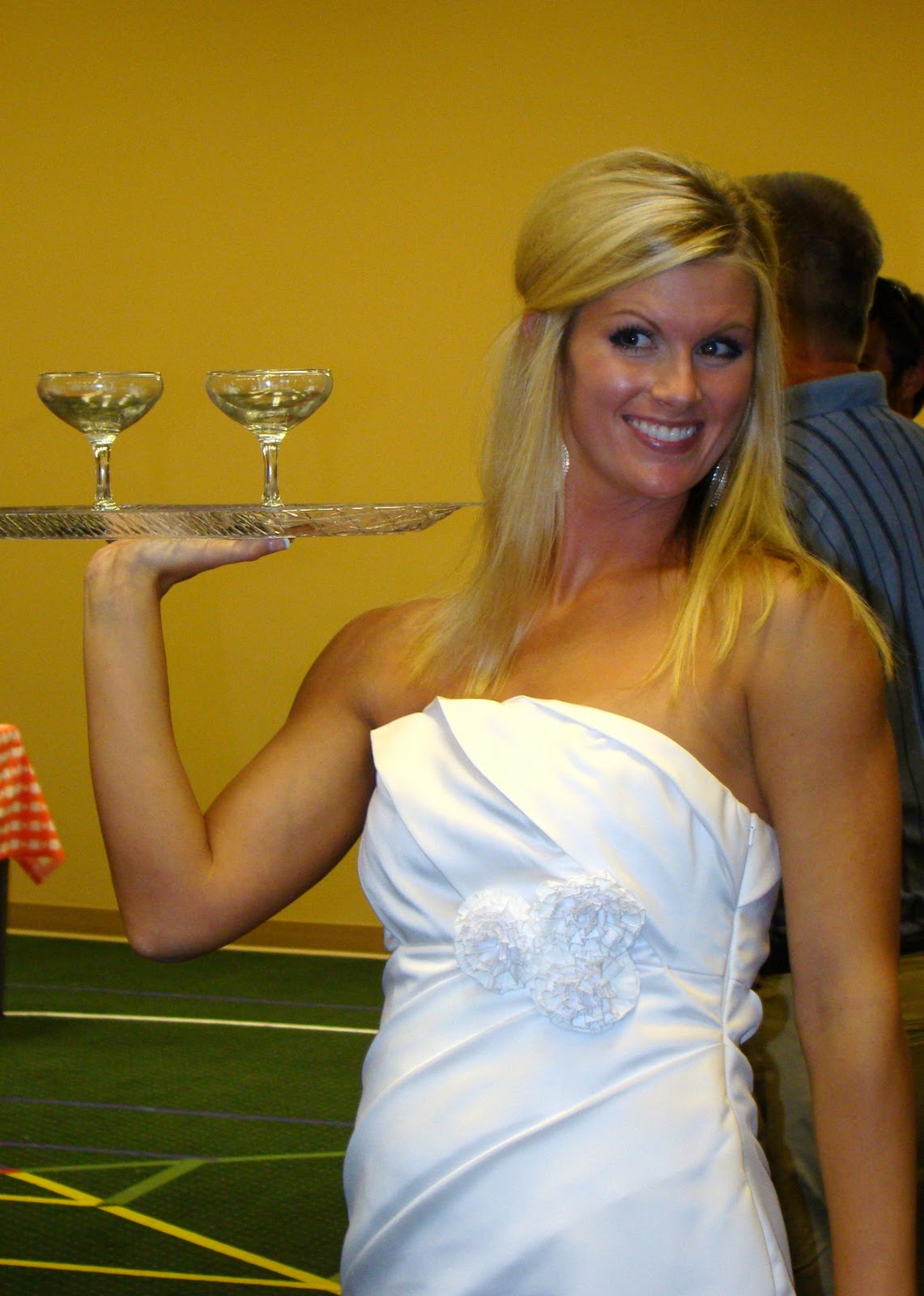 Best quote of the night? Zach was joking around with Claire about the Christian music that was playing and he said “who is this? Ludacris?” Claire responded by saying: “oh I love Luda – he does a lot for the community!” You prob had to be there but it was so funny and Zach has cracked up about it since! 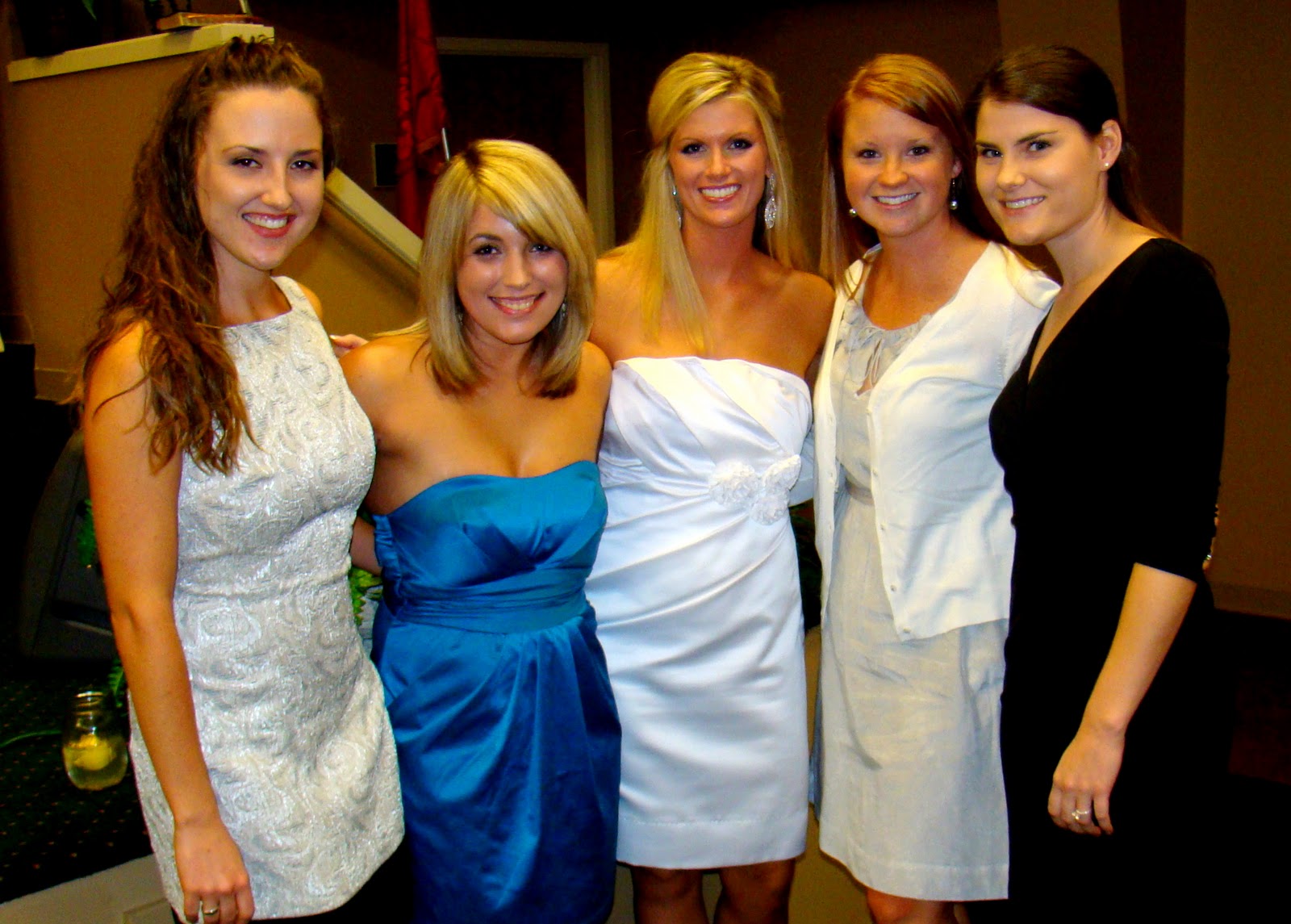 Zach was being super silly and complaining a lot about having to take pictures. He took this video just joking around. I got aggravated with his complaining and told him that he owes me b/c I took ENDLESS pictures during all of his football career and for me this wedding was my National Championship 😉

All the ladies with the groom 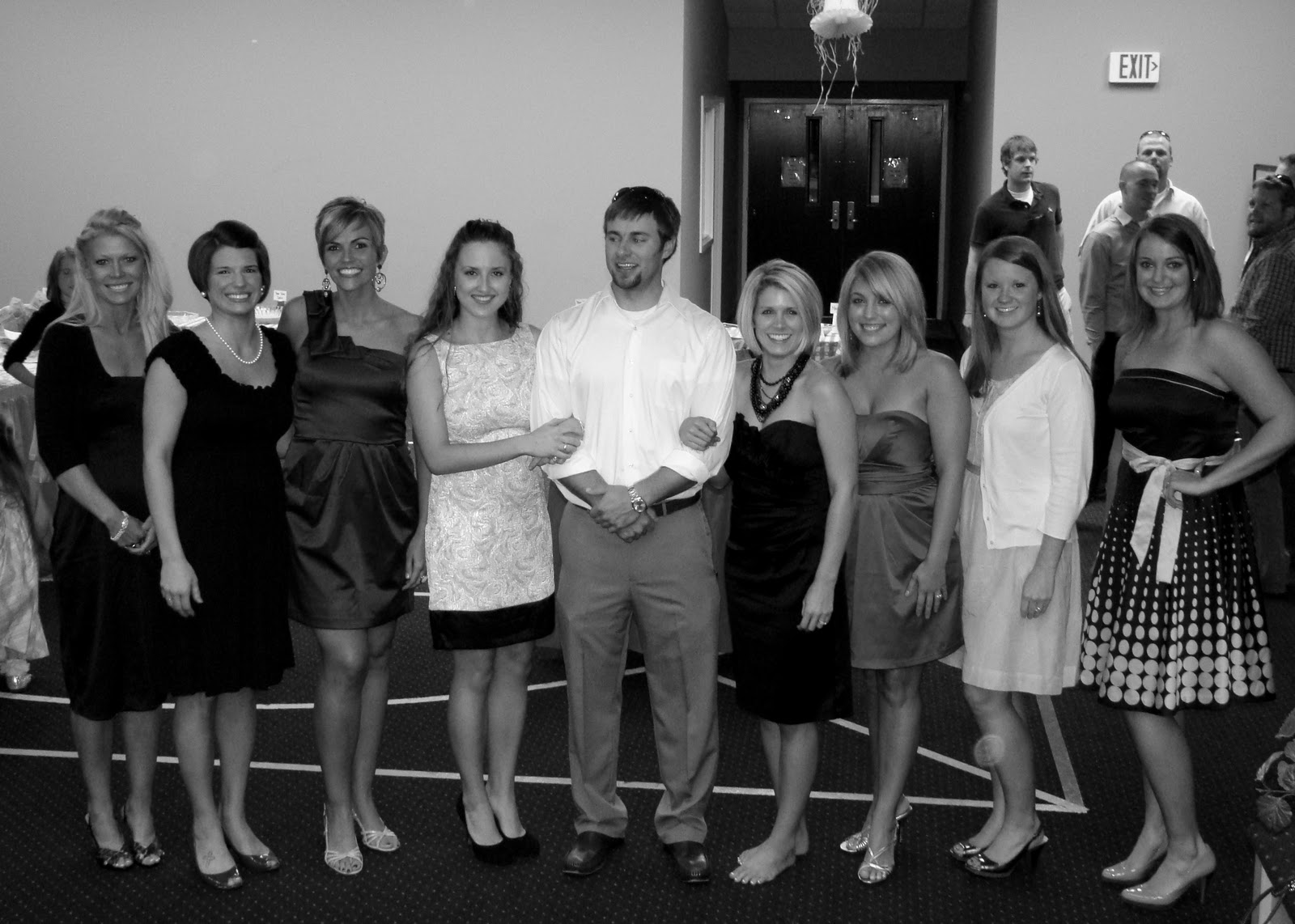 We’re ready for the big day! (And I know you are too…) 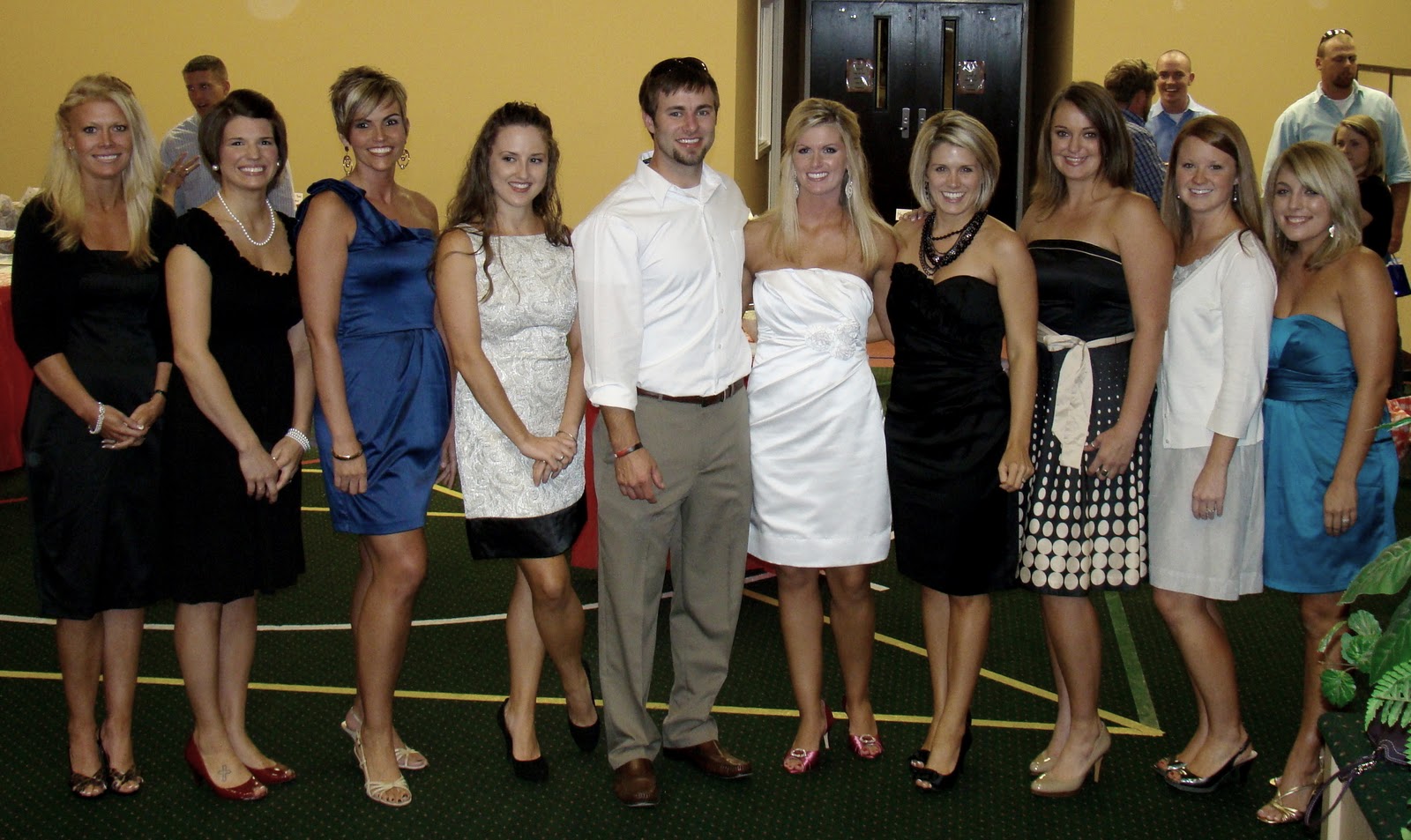