On Saturday we didn’t have as hardcore of a schedule because it’s was the Aflac “free day” meaning there wasn’t a guest speaker or a breakfast or dinner. (They did give us some spending money though!) We would have slept in but since I had to pump we had to get up anyways and after pumping you don’t really feel like sleeping so we went and got Bagels! Can’t go to NYC without doing that! I got my “usual” bacon, egg, cheese, and peanut butter. Didn’t compare to Bagel World in Melbourne but it was still good! 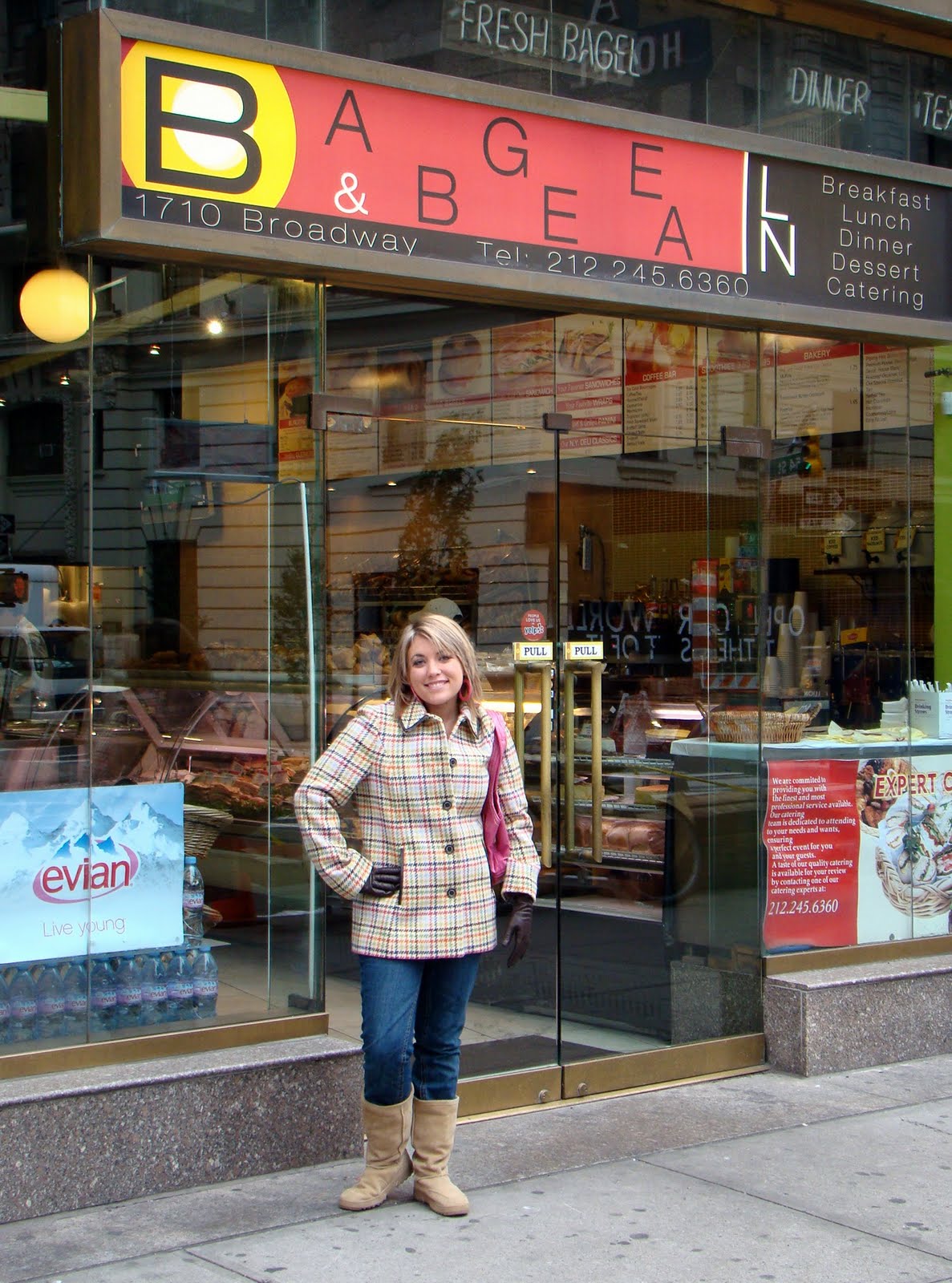 That day was the included Aflac Optional Activity where they pay for one thing you chose from a list of available activities. We decided to do the TV/Movie Tour of NYC. Since we’d been before we didn’t really want a normal tour as we’ve seen the major sites plus we wanted a pretty short one. I’m so glad we picked the tour we did! It was super fun and we learned so many fun facts about New York and all the movies and tv shows that have been filmed there! Here’s some of the major ones 🙂

“No Soup For You” from Sinfield…this is the actual restaurant where the show idea came from. The “Soup Nazi” actually sewed (and won!) for the show giving him that label! 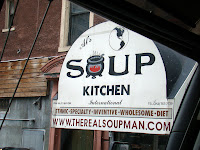 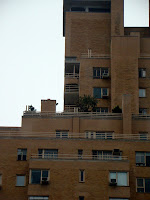 Parsons, where Project Runway is filmed (except this season it’s in LA) 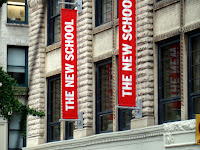 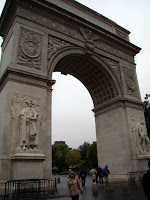 Will Smith’s apartment in I Am Legend 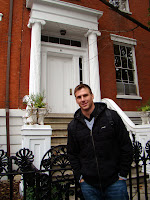 Restaurant where Meg Ryan “faked it” in When Harry Met Sally 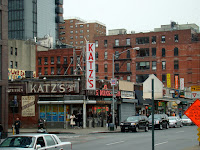 Firehouse from Ghostbusters (and Hitch) 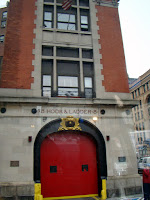 The house on The Cosby Show 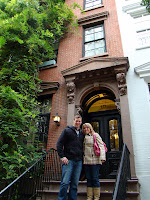 The apartment building on Friends! I was most pumped for this one 🙂 I never realized that the show was actually filmed in LA and that they just shot scenery in NYC for it. Also the apartment doesn’t really make sense if you watch the show b/c they don’t have a balcony!!! Still really neat to see in person 🙂 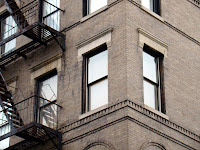 Bonus! While on our tour she told us that tons of tv shows and movies are filmed all the time in NYC and you can tell because they are required to tape up neon signs saying what they are filming. We just so happened to pass by a movie set! They are filming a new Michael Douglas movie called Wall Street II (I think) maybe this was his trailer! She said this one was one of the actors trailers 🙂 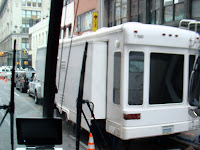 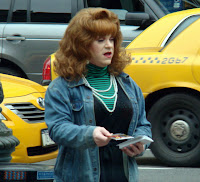 On the way back to our hotel some of the people told us they were actually filming Sex and The City II right outside our hotel!!! We totally missed it! Some of the people with us said they saw the cast, including Miley Cyrus! So cool! Now Zach and I both want to see the movie to see that scene as I think it’s the only one Miley will be in! Here’s where they were filming: 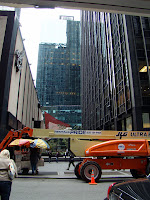 After the tour we headed to Central Park to check out the carousel. We didn’t want to spend a fortune on the trip and I had fun hunting for free or very cheap things to do! It was only $2 per person to ride and it was so fun and such a classic thing to do! Here’s a video Zach took while riding haha 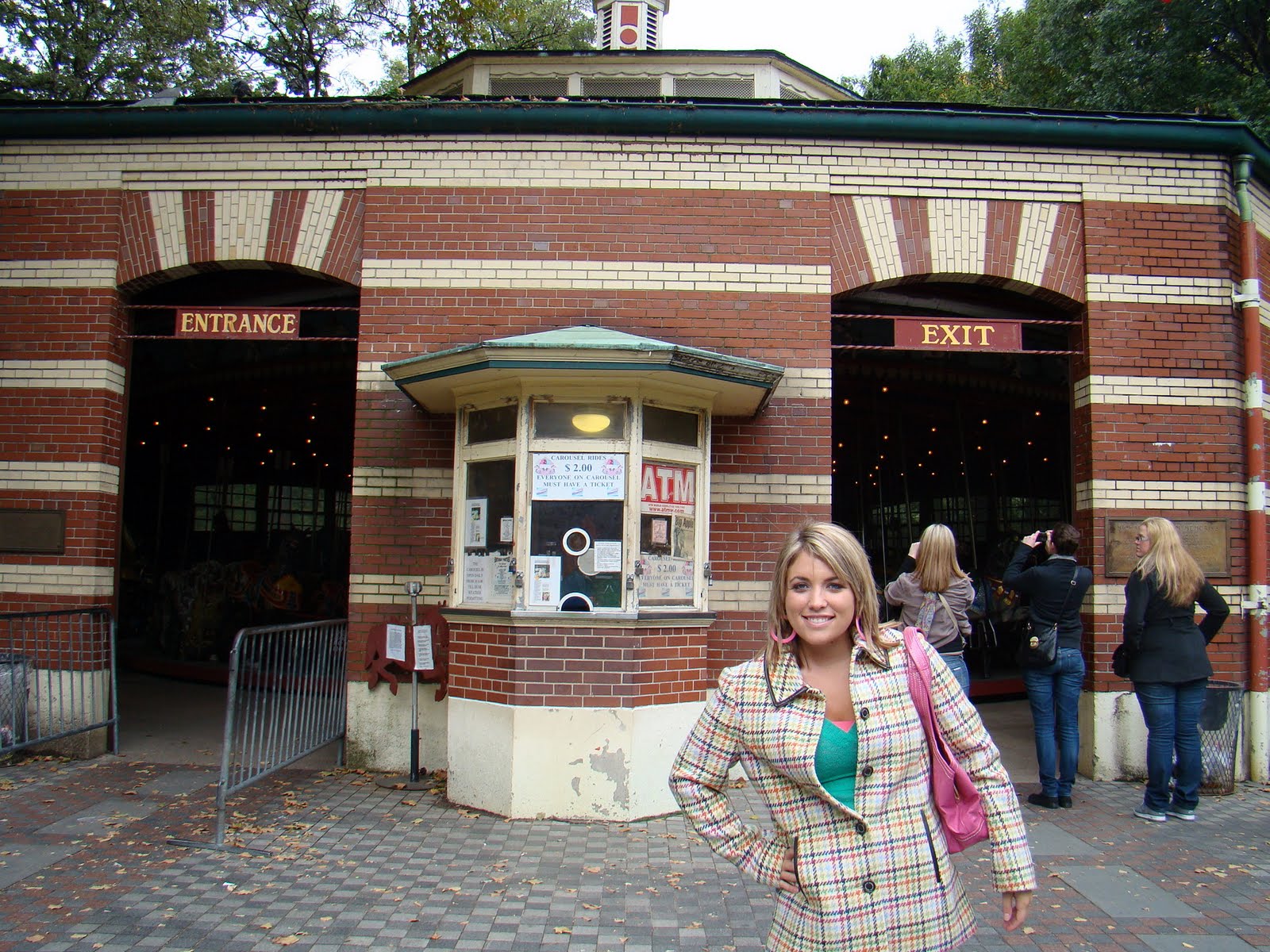 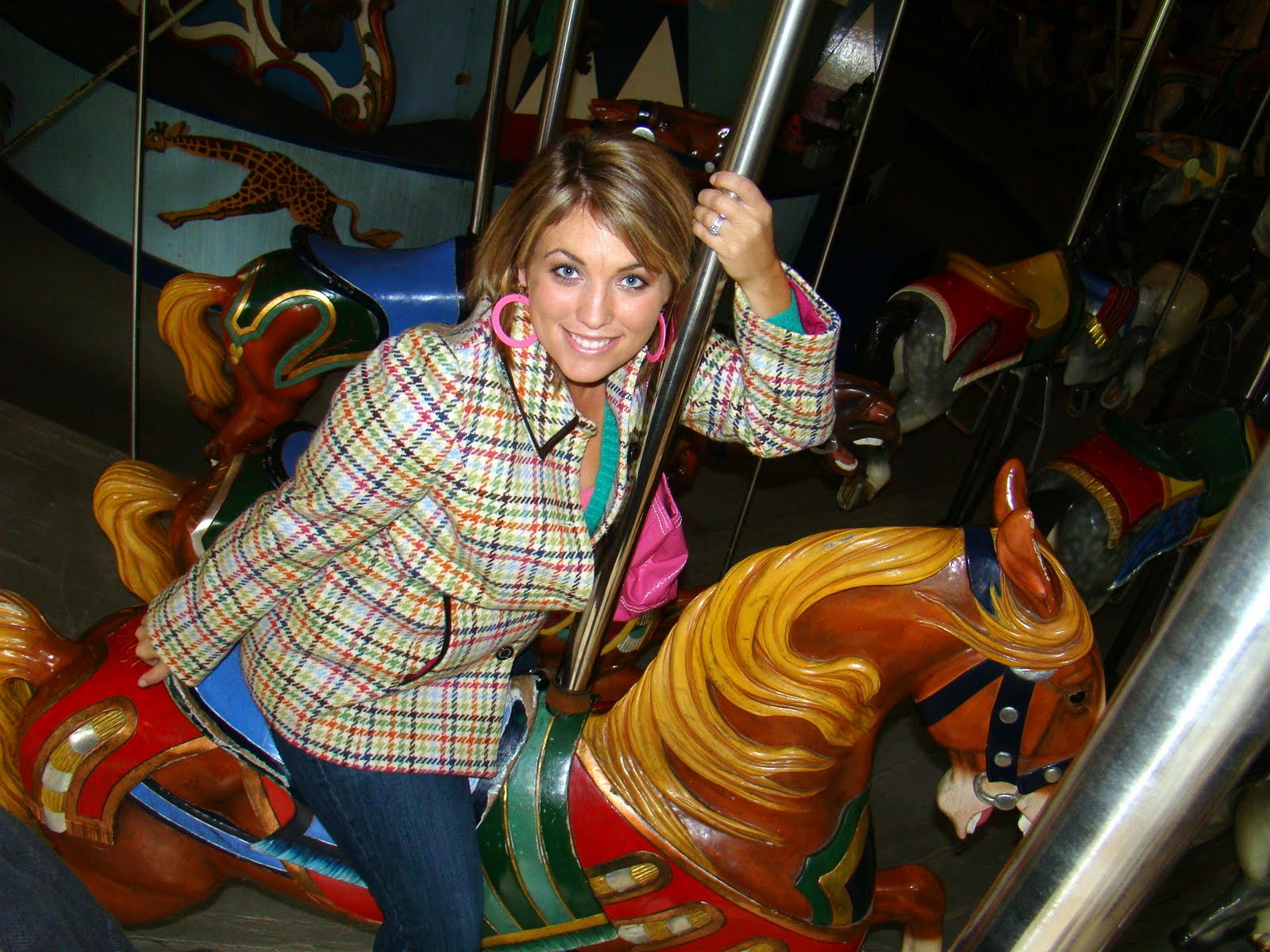 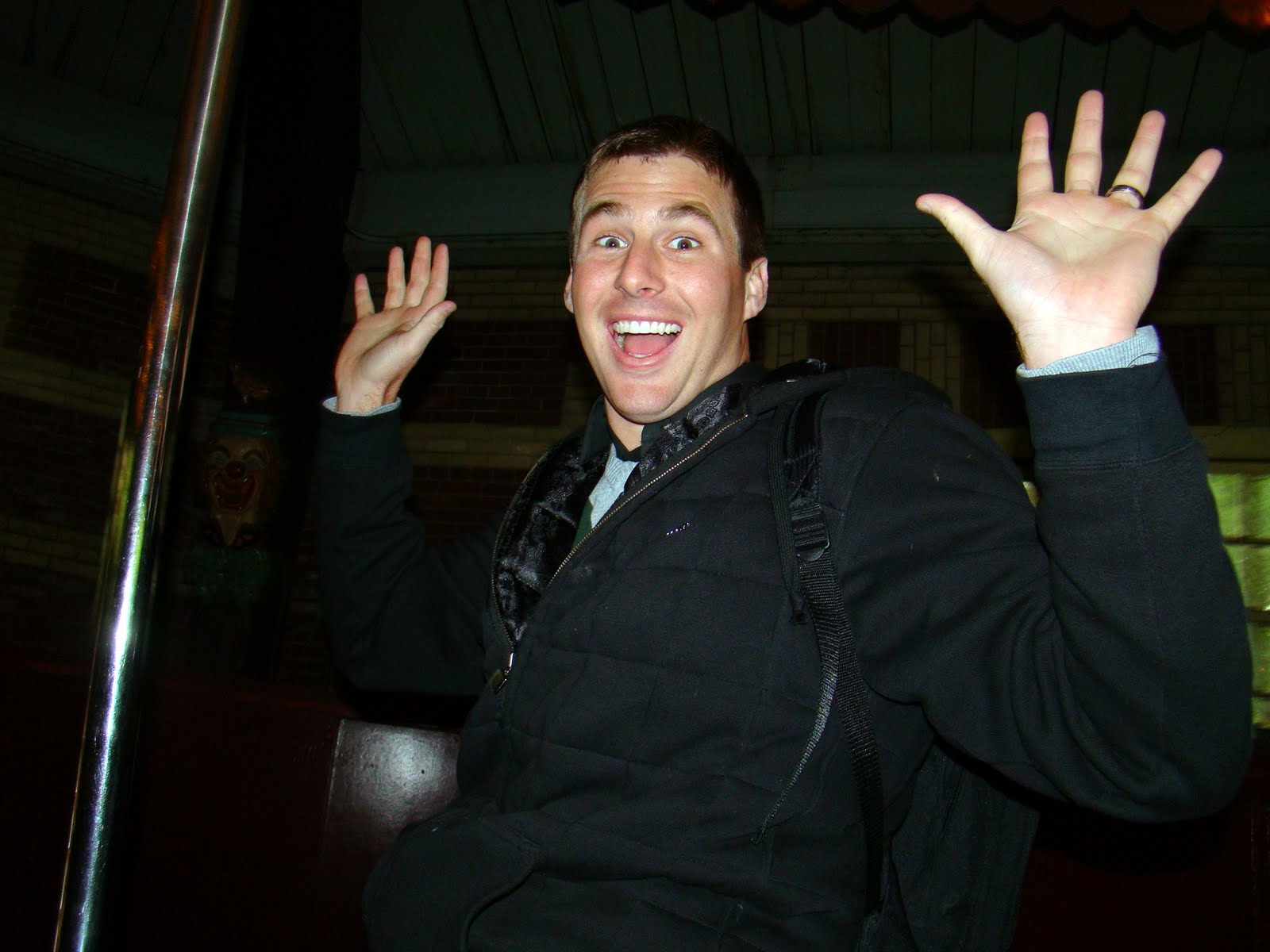 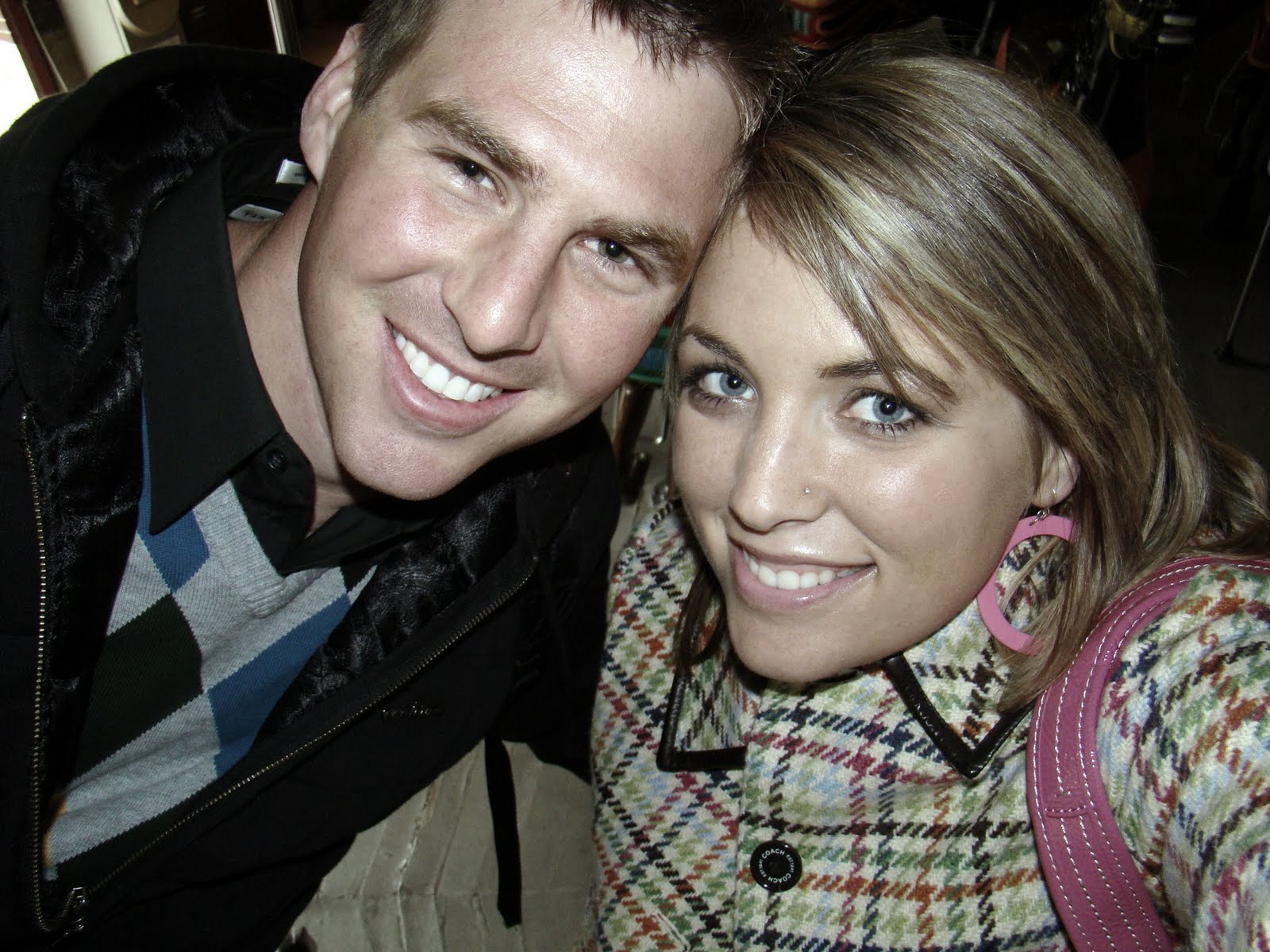 Afterward we checked out the Checker House in Central Park and it was actually free to play! We played a game but it didn’t last long since Zach was killing me and I got that itch to keep going so we could fit everything in our day 🙂 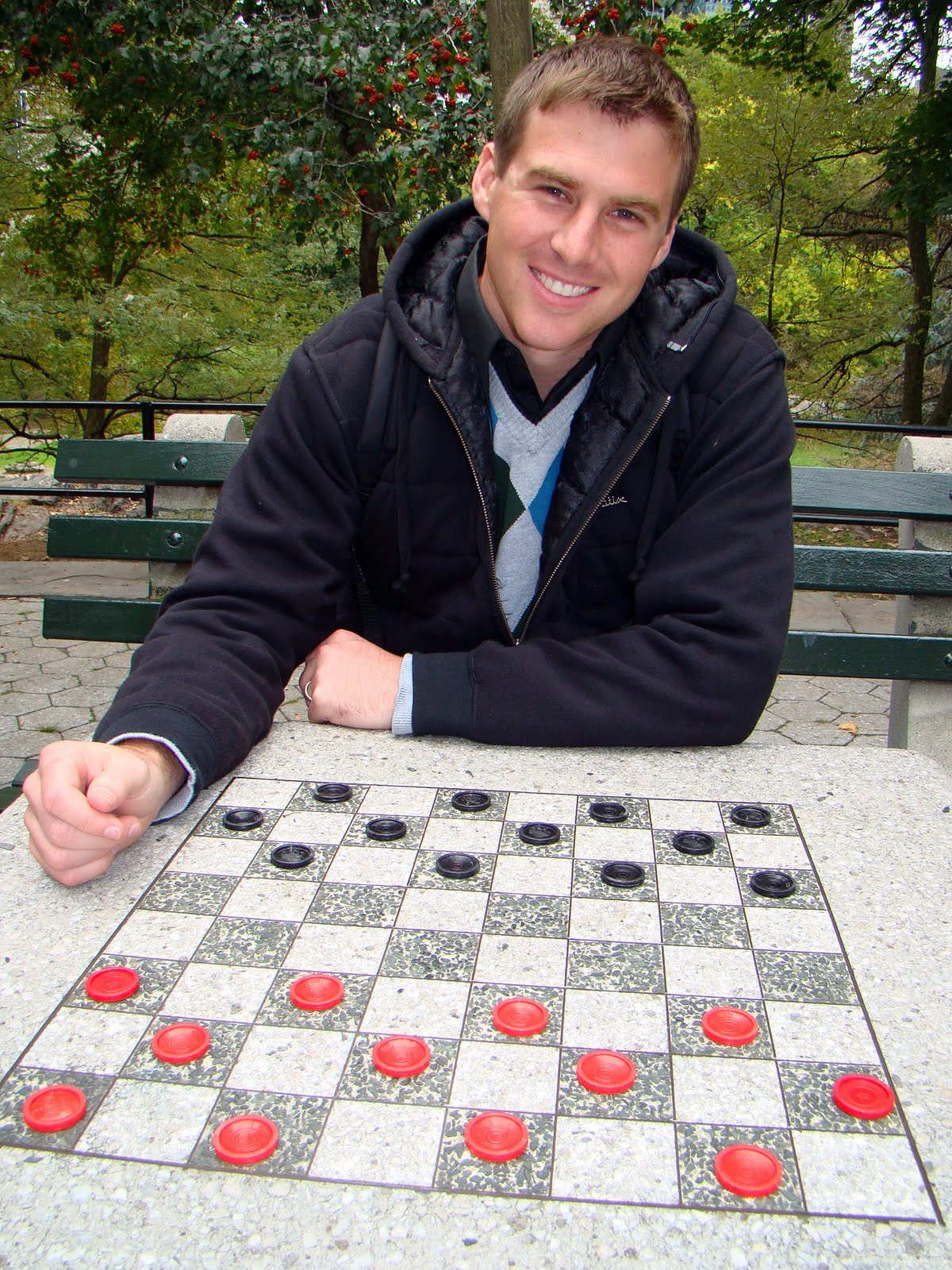 Once we figured out how to get out of Central Park (it’s HUGE) we headed to 5th Avenue to shop at FAO Schwarz. I’d gone there back the first time I went to NYC when I was like 12 but I didn’t really remember it and now that we have a child toy stores are much more exciting! 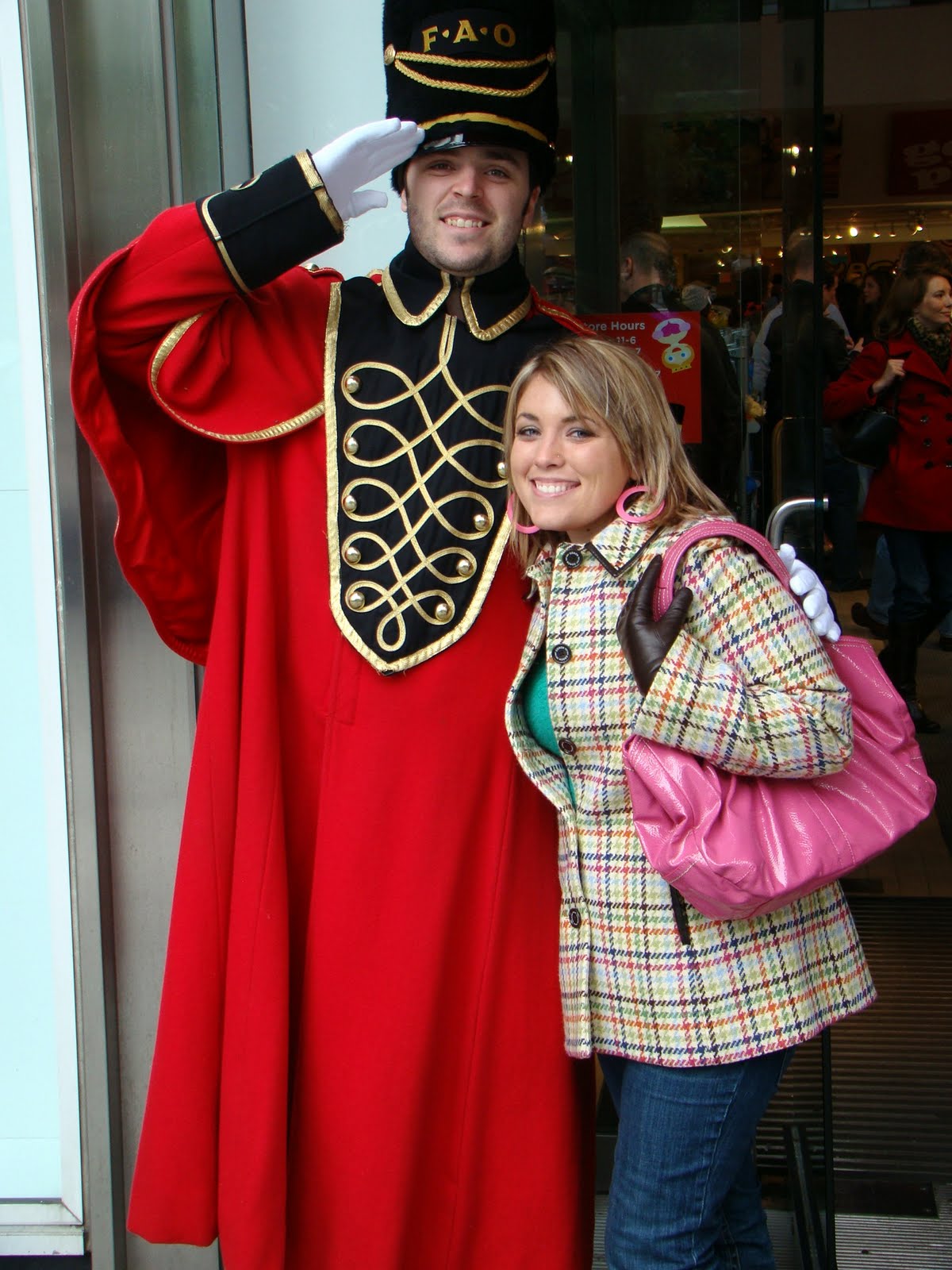 The coolest thing was that they have a puppet station where you can design your own puppet by the same people that make the Muppets! We LOVED the idea and totally were sold on it and ready to make one for Kye…the only problem…it was $125!!!! Yikes! That would be over half his Christmas on one thing, just not worth it. Maybe someday we’ll be able to afford to do it because we both love the idea (we did find a much cheaper, $22, puppet to buy him though). 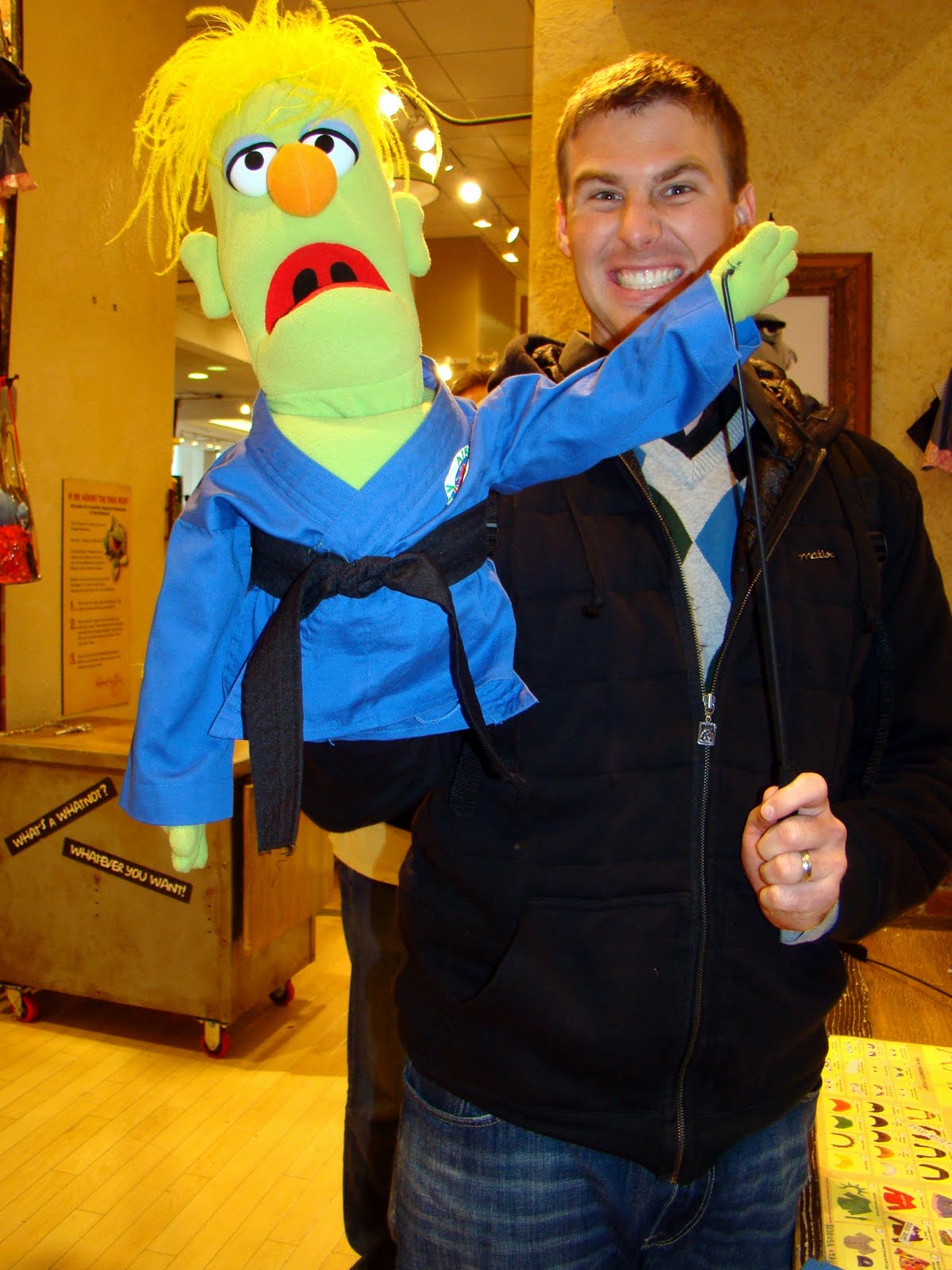 Our hotel was right down the street from MOMA (Museum of Modern Art). We didn’t actually go in but who can resist this picture? 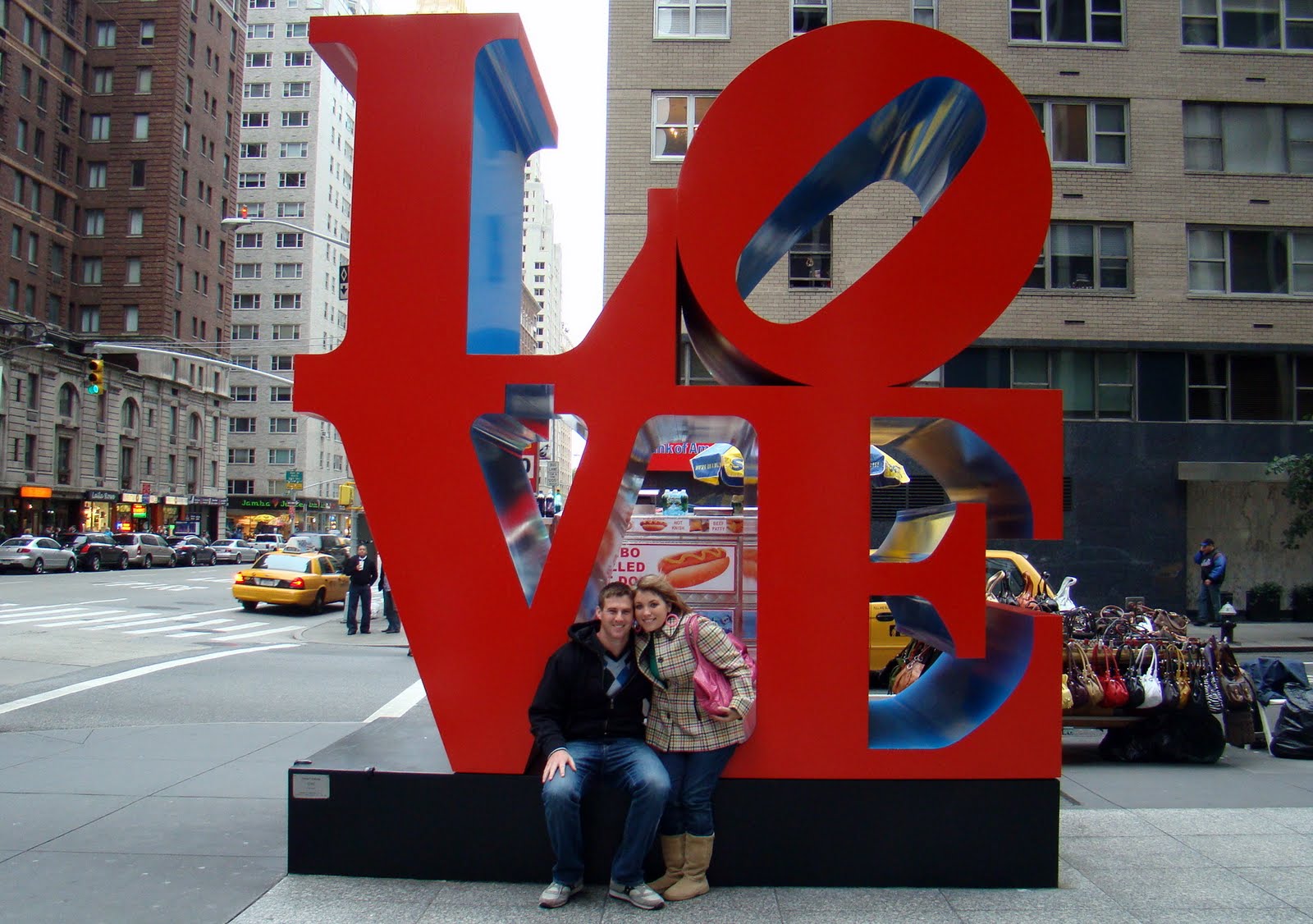 After a pump session we headed back to Times Square to check out ESPN Zone. Yes, I know they have one in Atlanta but we never go to Atlanta and I wanted Zach to get to do something very manly! We didn’t eat there but they have a game room and if you join their club online you get 45 free game points apiece! Score! We had fun playing games together and Zach had a GREAT time playing this football game! 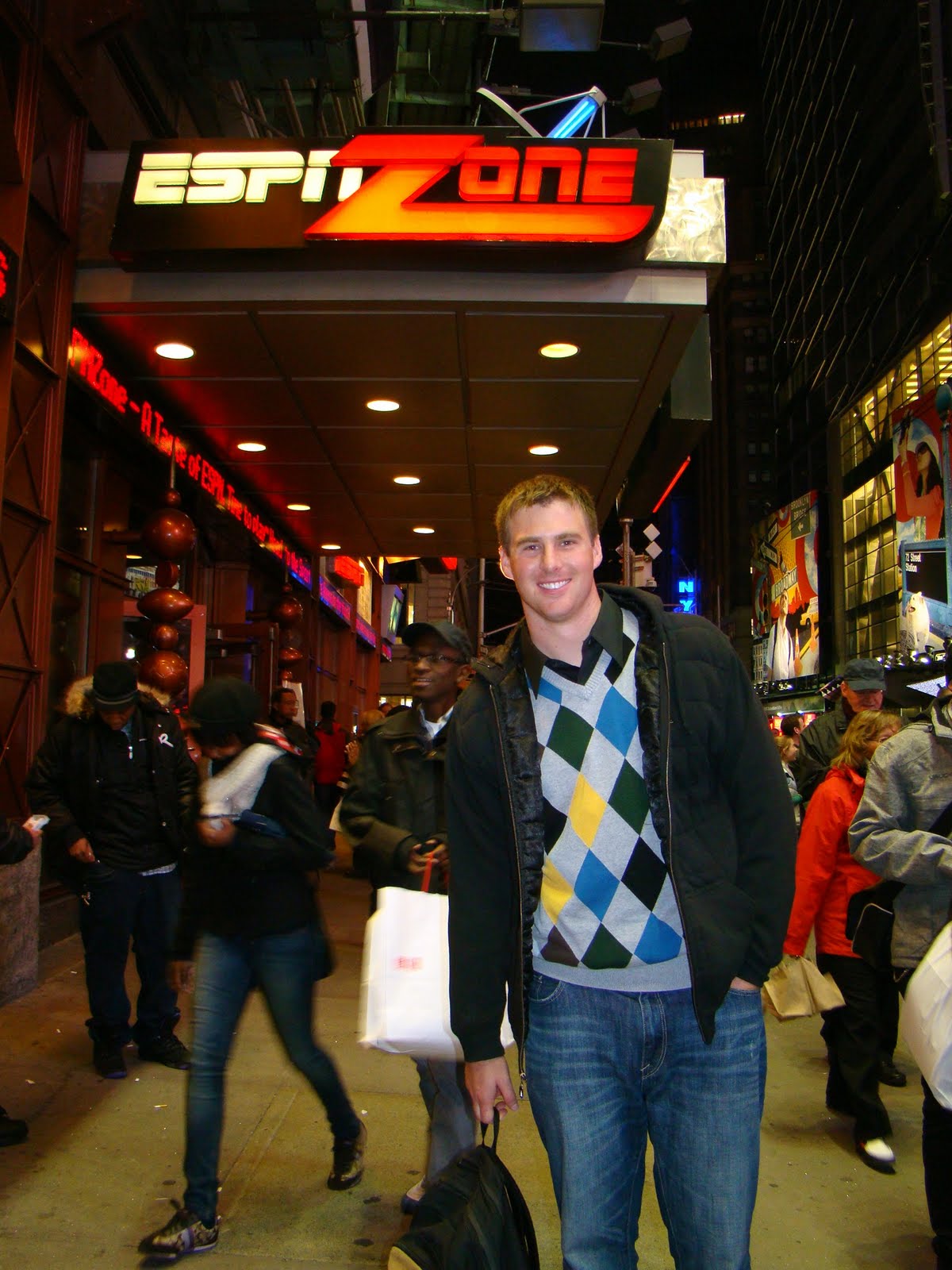 It was this game where you have a certain amount of time to score as many points as you can and you throw footballs through holes in cardboard players that are moving the whole time. It was really hard!  Some drunk guy from New Jersey asked Zach to play against him and Zach killed him! Notice the score (Zach was player 2 obviously). 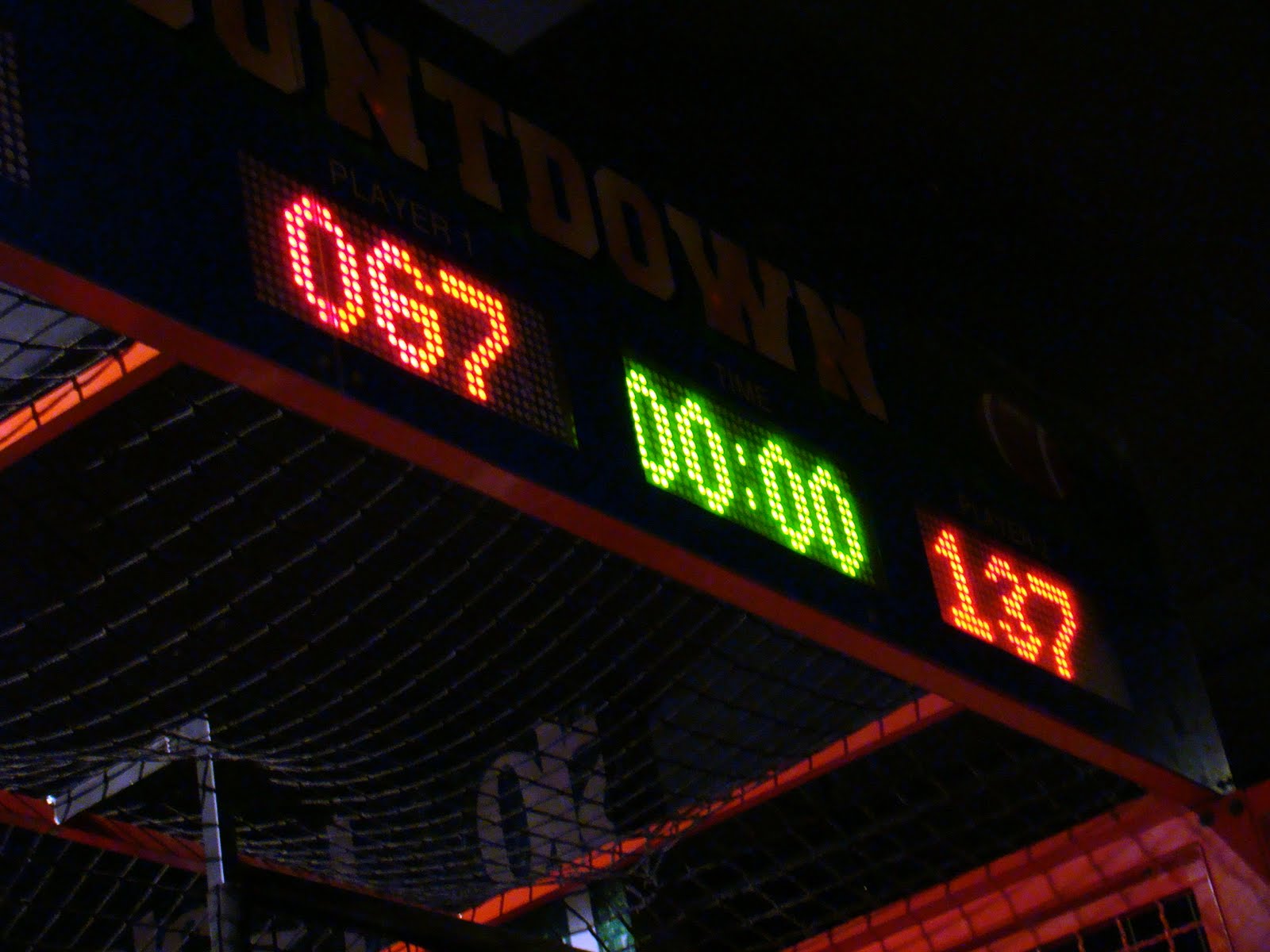 I was thinking Zach was pretty good until this short oriental guy stepped up to play by himself. He got into the machine and collected all the balls and set them all up. We thought he worked there! He started going and it was AMAZING. I actually had him play again so I could get a video of it. This isn’t a video of the whole thing because I thought he was done when it was just loading up the bonus round but isn’t that crazy? He said he comes there a couple times a week and he’s been playing it since 2002. He throws a ball every 2 seconds! He said the average players scores around 30, that only like 1 out of every 25 score over 100 (good for Zach!) and that he has the highest score ever. I guess everyone has to have a hobby! Here’s his final score of the round I taped: 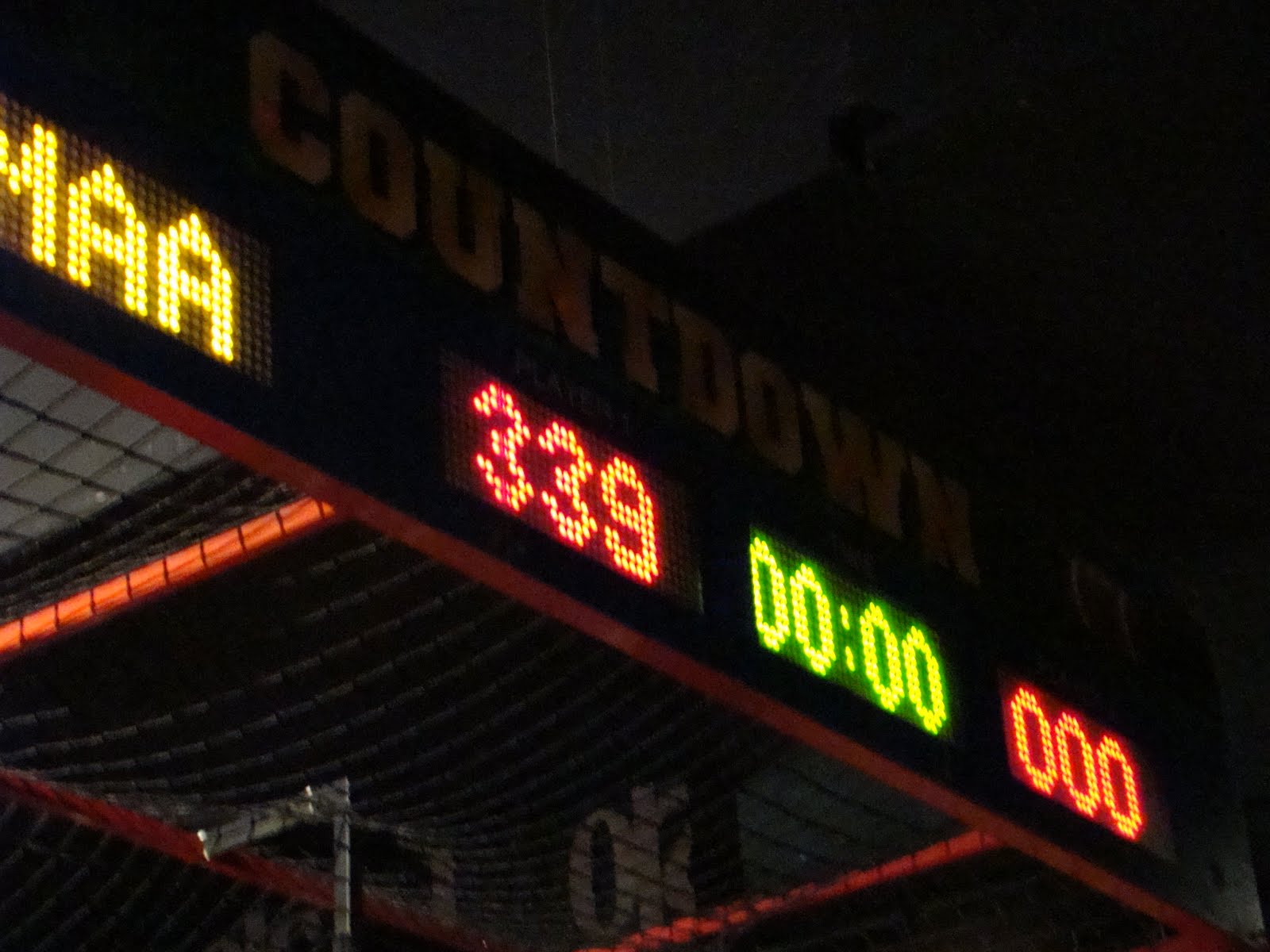 After all the fun games we walked to Grand Central Station. On the way we did a little shopping at H&M and I got the sweetest compliment from the guy who checked us out! He said he loved my coat and that it was “so Prada” I told him is was Coach and he was all impressed and then I told him H&M seemed a little too young for me since I’m a mom and he about died!!! He couldn’t believe I was a mom or that I have such a young baby! He said I looked awesome 🙂 It made me feel so good coming from a stranger haha! Anyways we went to Grand Central because it’s one of those things that you just have to check out! It was free and we made dinner reservations there at Michael Jordan Steakhouse. 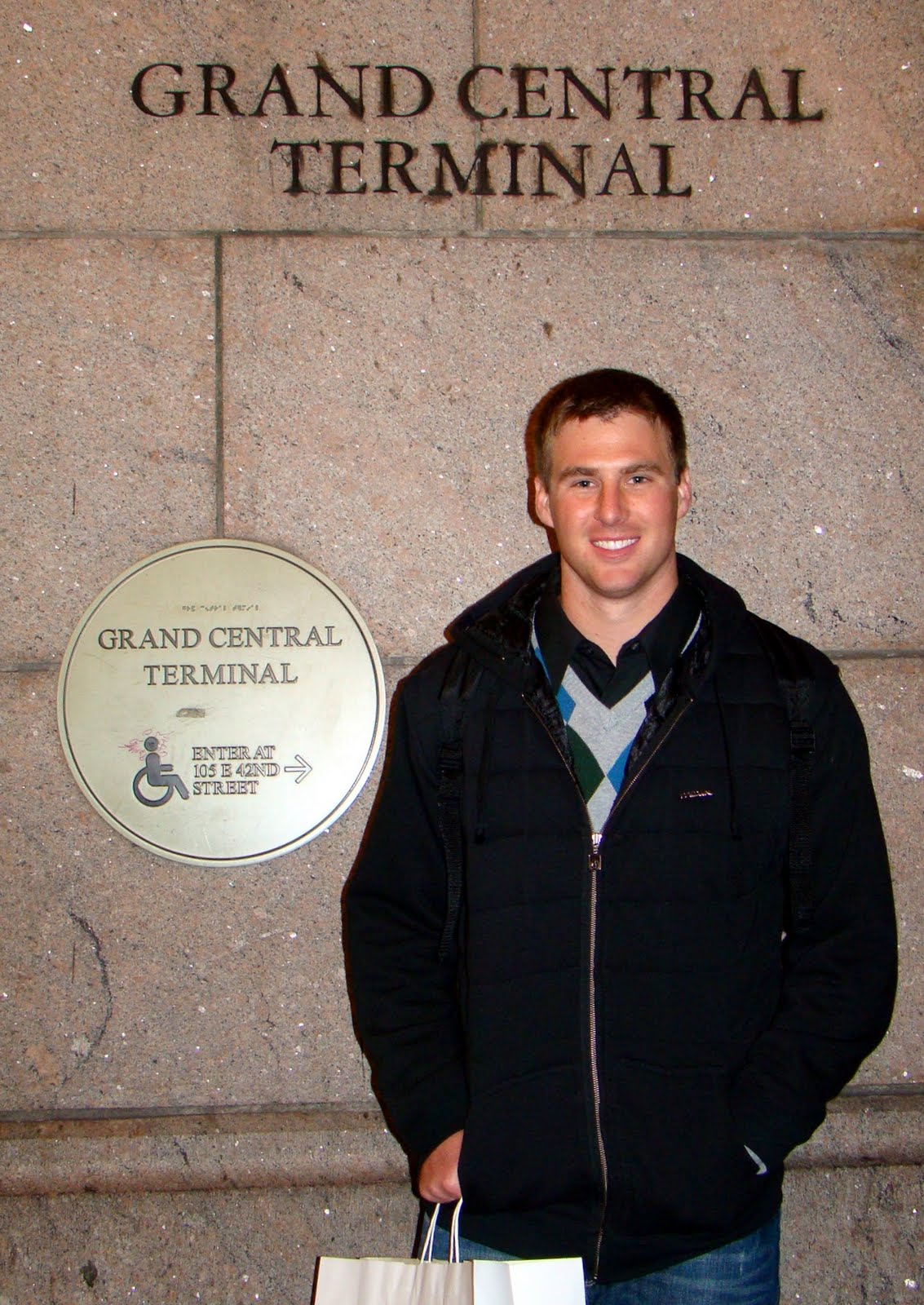 The whole place was beautiful. I printed off info online so we could learn about it while we were there. It was so neat!!!! From the information booth famous clock where all the people meet in the movies, to the ceiling covered in zodiac symbols, to the real gold chandeliers from 1913, the place didn’t disappoint!  The neatest thing was the Whispering Gallery where you can face the corner and whisper and then the person can hear you through the other corner. It took us awhile to figure out that it was the corners diagonal from each other and that you have to FACE the corner to talk AND to hear it haha. You should have seen us trying and the several people that stopped to tell us what to do! It makes for funny pictures, but it really does work and it super neat 🙂 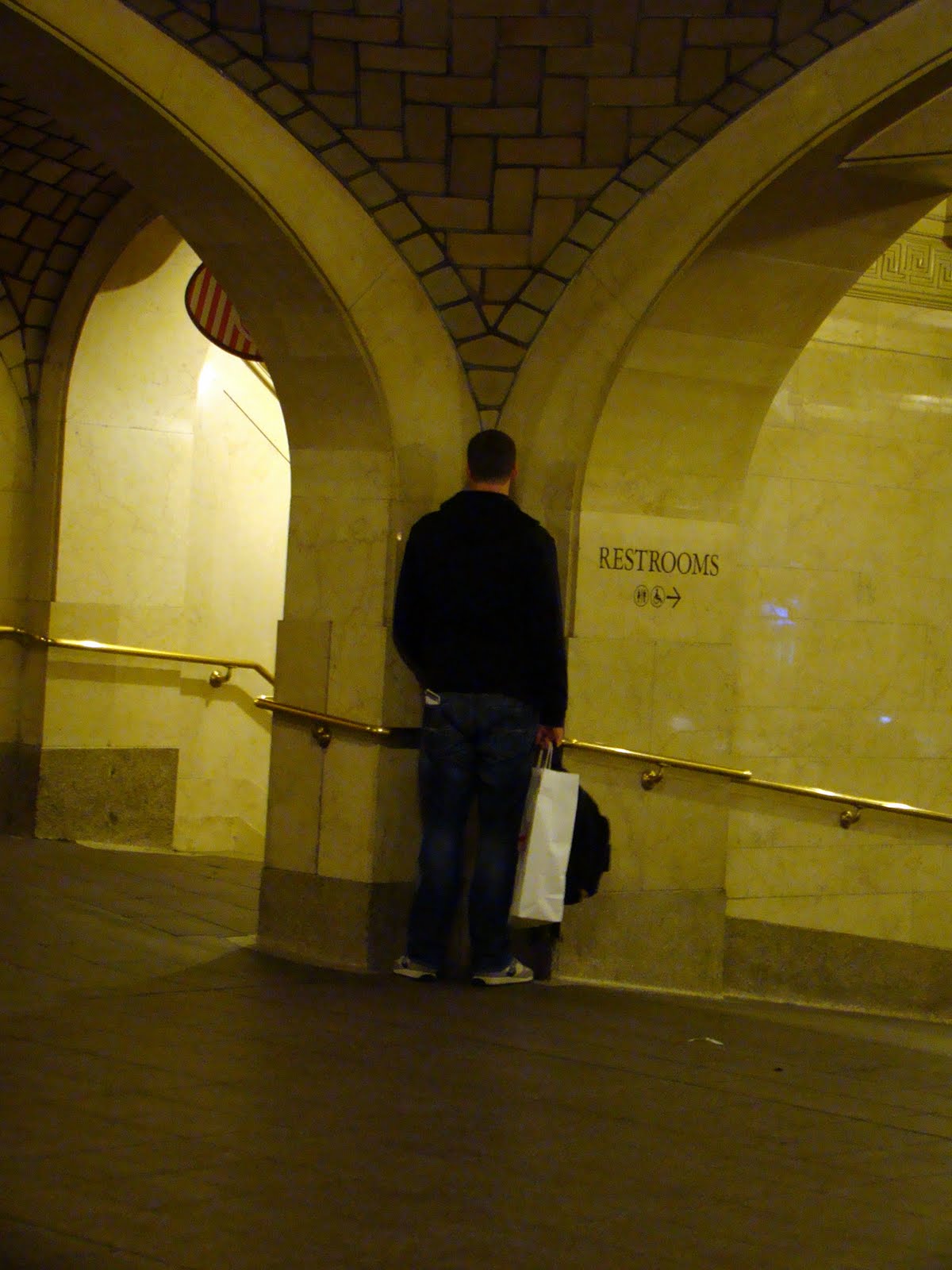 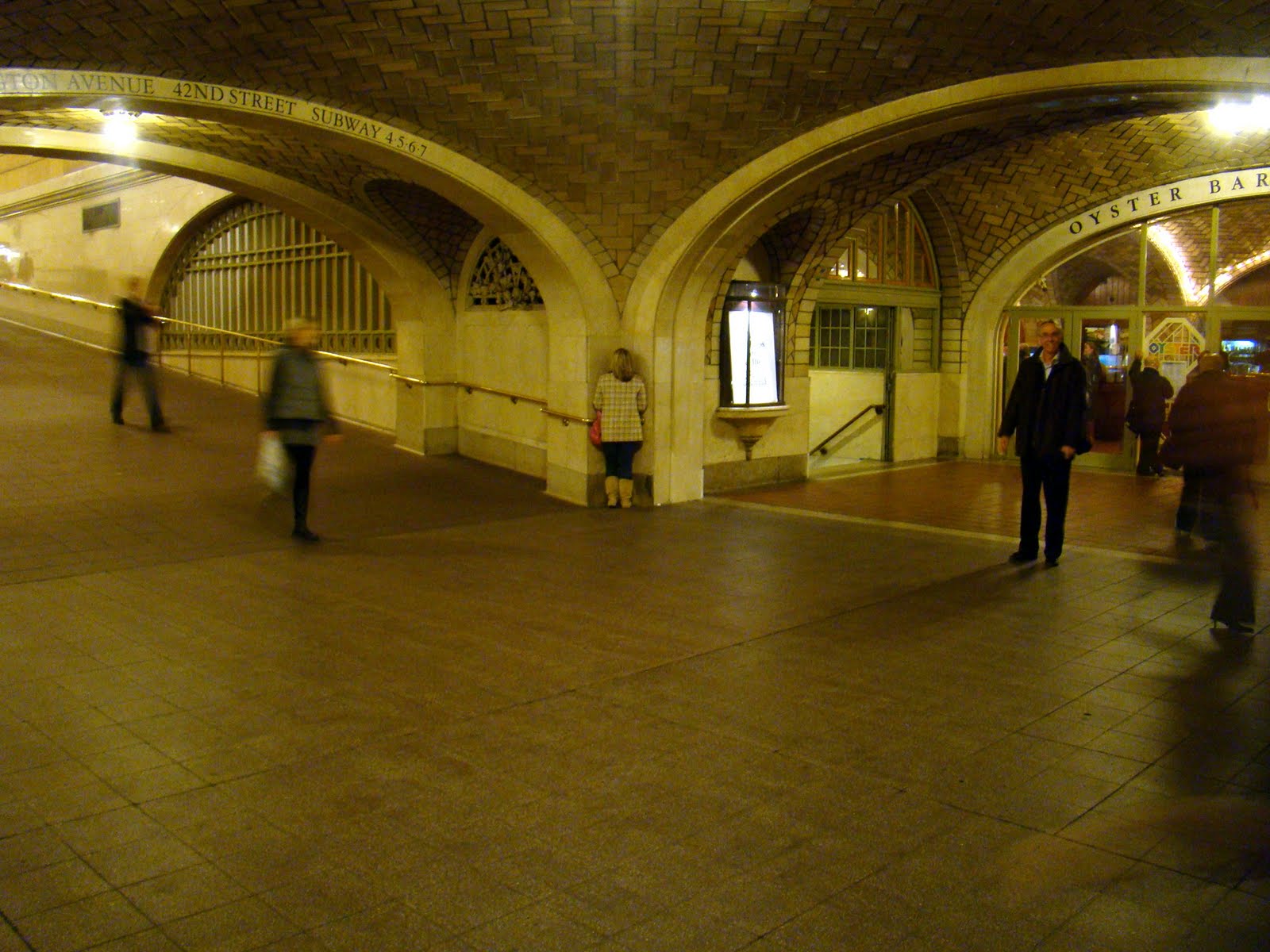 The Steakhouse is located in the main concourse with a beautiful view of the awesome ceiling and pretty chandeliers. All that and the food was amazing too! In order to save some money we split a steak (at $40 a piece can you blame us?!?) and got a side (a $10 side…welcome to New York huh?!) to split too. The waiters were super nice about it and didn’t act all snotty or anything. And the food was incredible. I was very very impressed as was Zach. They actually have an $88 steak there that is 44 oz!!! Would have been so awesome but we were okay with what we got, maybe someday 🙂 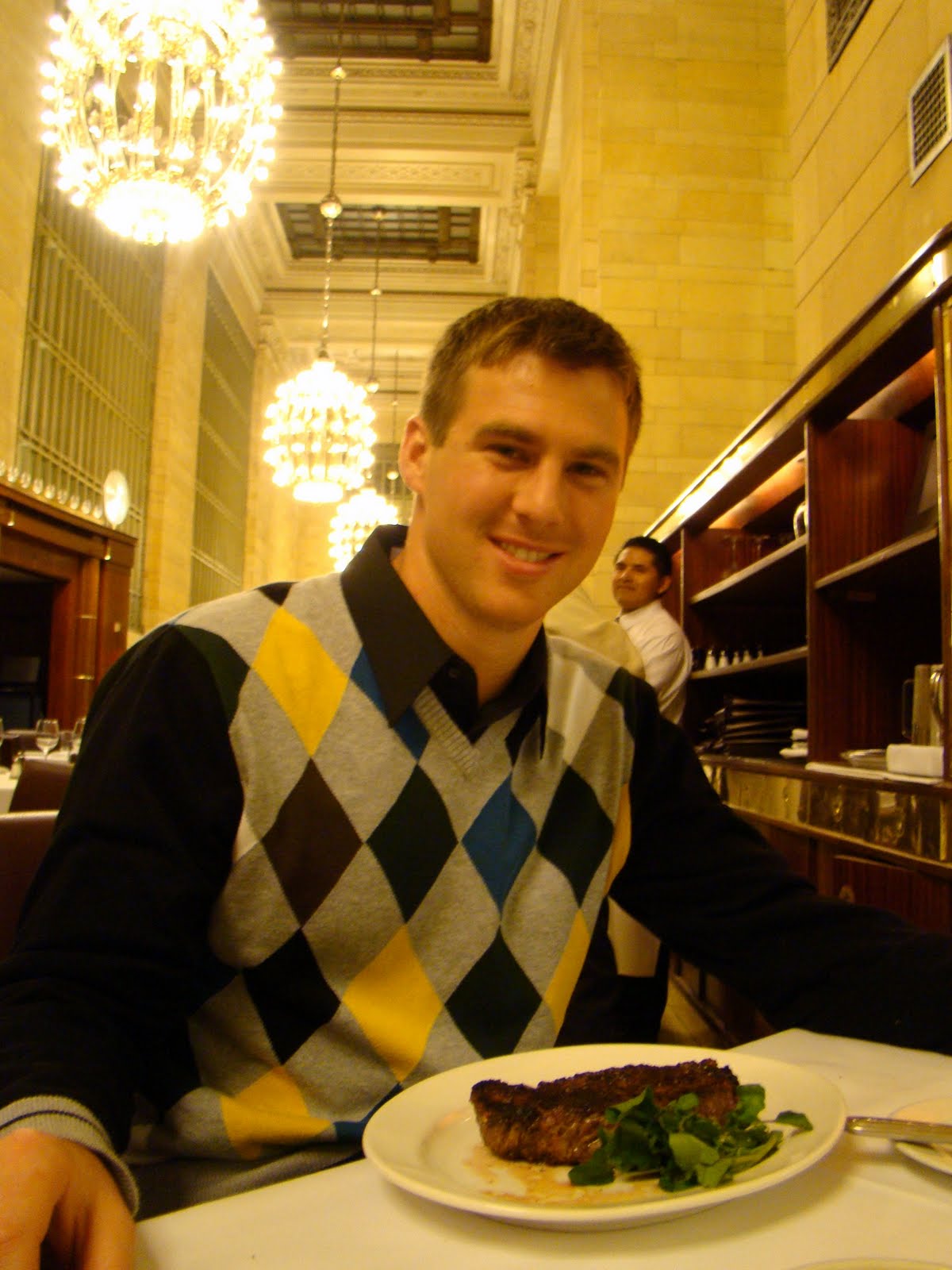 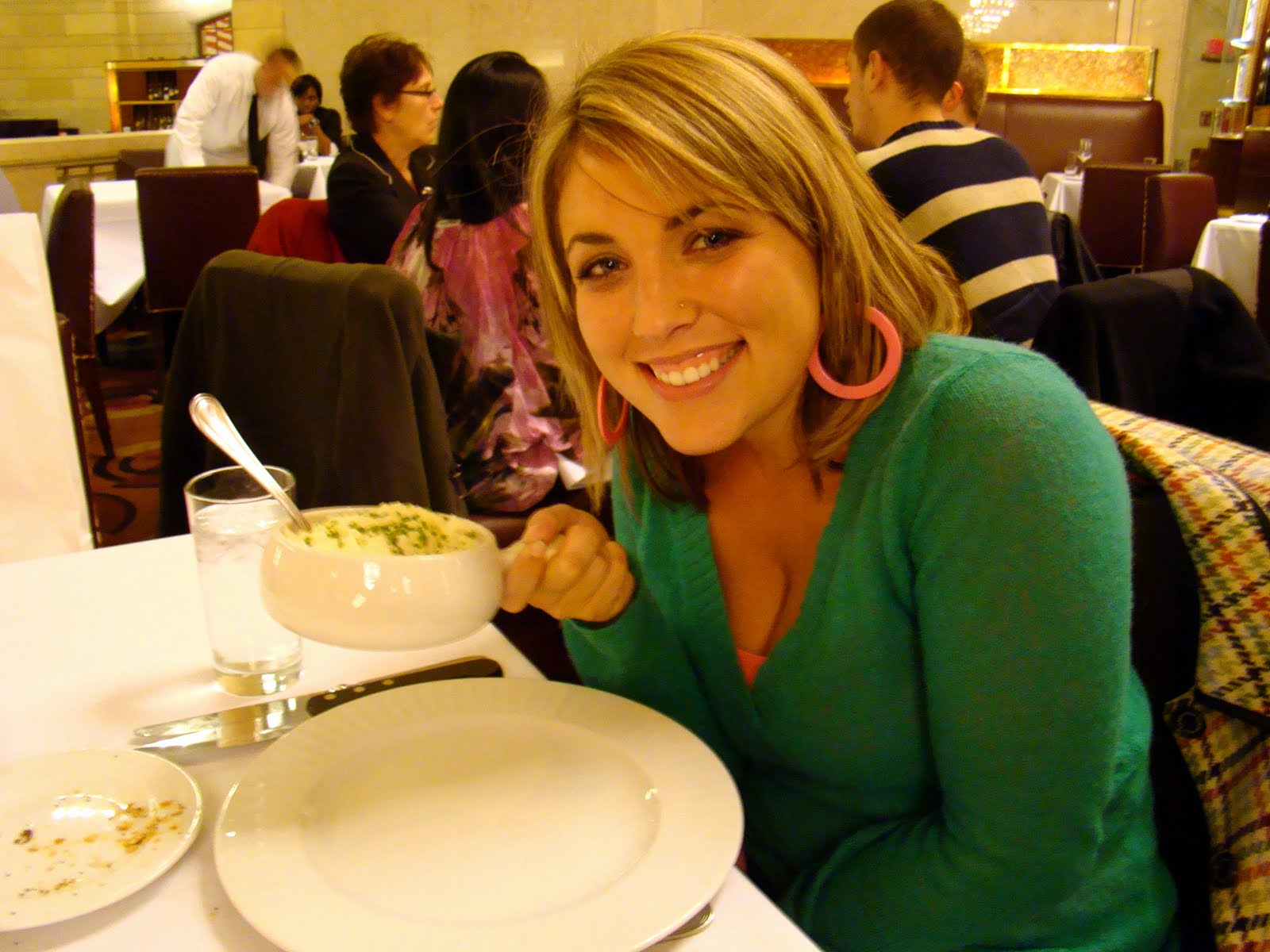 One of the things we planned to do while in NYC in October was to ice skate at Rockefeller Center. I just really thought it’d be fun and romantic as did Zach! We wanted to do it at night and we passed it on our way back to the hotel but decided not to do it. I needed to pump and it was FREEZING and we were both so tired and wore out from all our walking (we didn’t ride the subway at all the whole day!) that we just thought we’d do it the next day. Of course it ended up raining on Sunday so we didn’t end up getting to do it at all and we both kinda regret not doing it when we had the chance. It would have cost us almost $50 more and we didn’t need to spend the money AND Aflac typically goes there every 5 years so we can just do it next time. And it’ll be extra fun then because we’ll be looking forward to it for so long 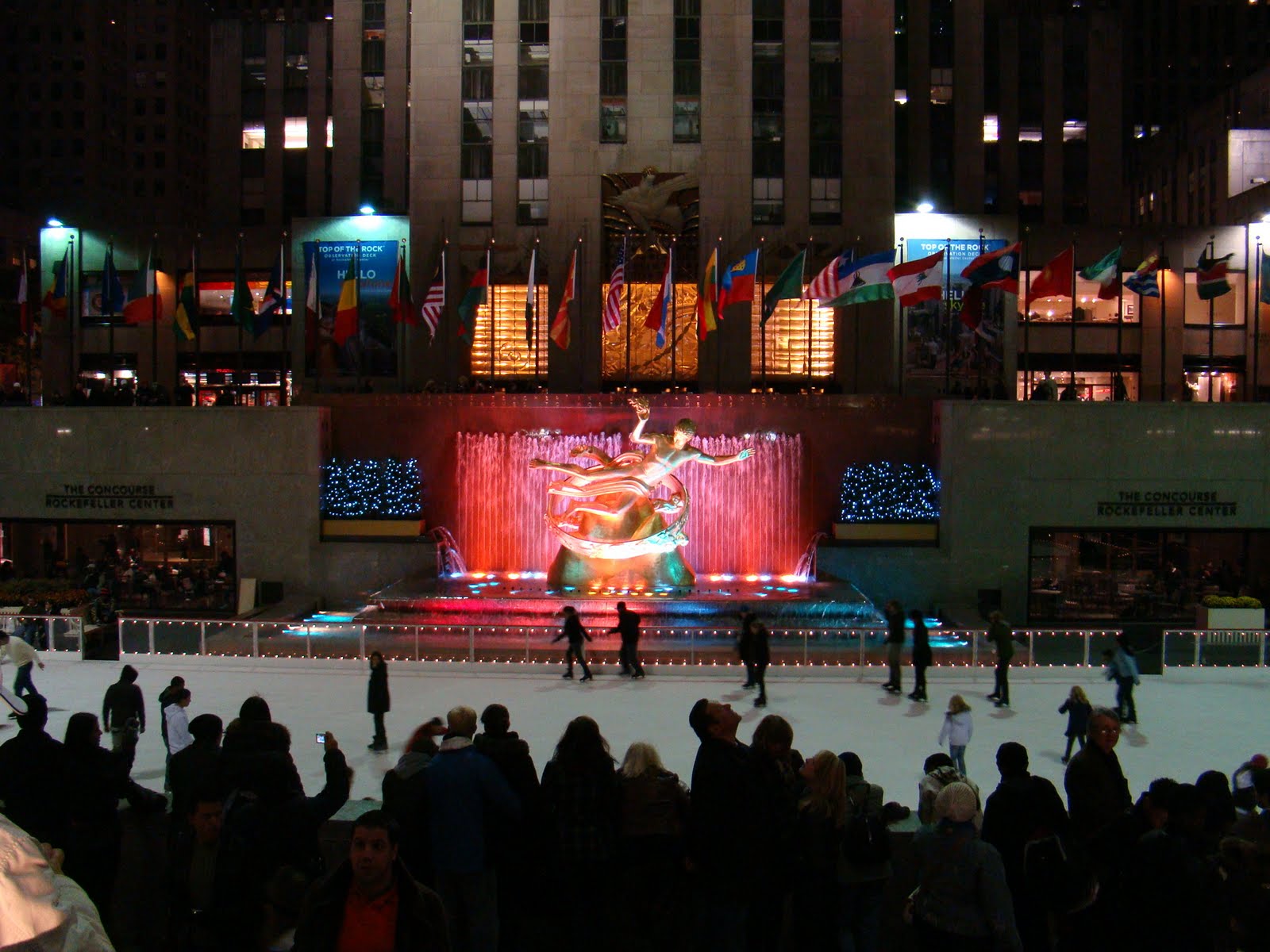