Last year I had a GREAT time at Kye’s Thanksgiving event at school. I was looking forward to it again this year 🙂 Zach had to work and simply couldn’t be there. I hate that, but Kye and Britt have a daddy who is SUPER involved and is home for dinner almost every single night…so missing somethings isn’t too big of a deal. I DID tell him that once we have two kids at school he’ll have to be there b/c it’ll get tricky trying to attend both events at the same time!

Anyways I dropped Kye off at school then took Britt to Mrs. Charlotte’s for her nap. It worked out great because I just hung out there for a bit and heated up my green bean casserole and visited with Mema! They didn’t want parents to arrive until 9:30ish so I def had some time to kill and it worked out great 🙂

Casey called me and had decided to take the morning off work so she could be there! Isn’t that SO sweet? She wanted to show her niece and nephew some Auntie Casey love 😉 I thought it was precious! I met her and Courtney in the parking lot and we walked in together. When we got there the kids were sitting in “circle time” and performed their ABC song. HERE is a video of it 😉 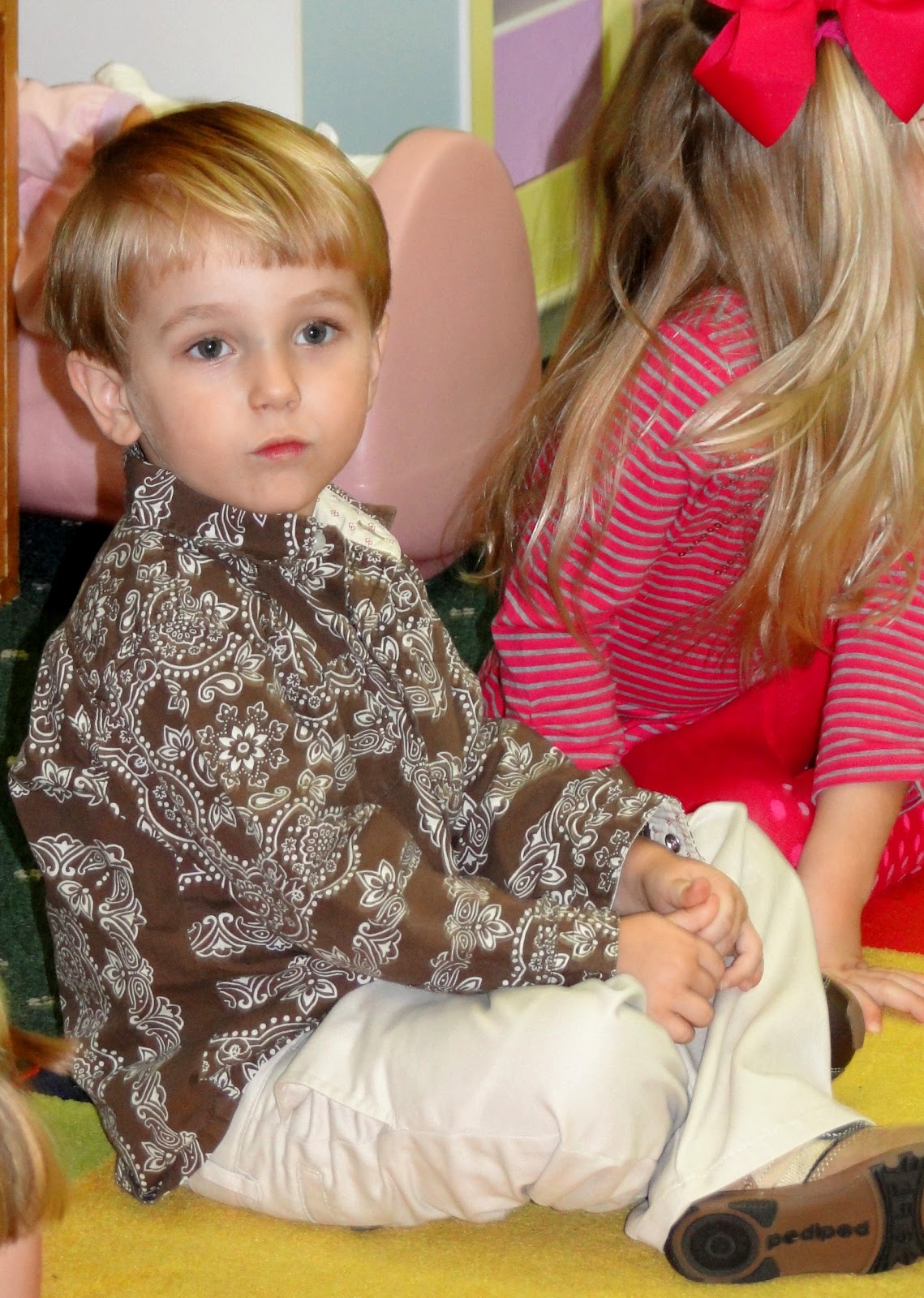 After their ABC’s we went to their tables and helped them decorate their outfits. It was similar to what we did last year but this year there were SHARPIES on the tables. Permanent markers and three year olds?!?! I was secretly freakkkking out haha. I did not want that junk staining my kid’s hands…but especially not his clothing! Luckily he was super careful about it 😉 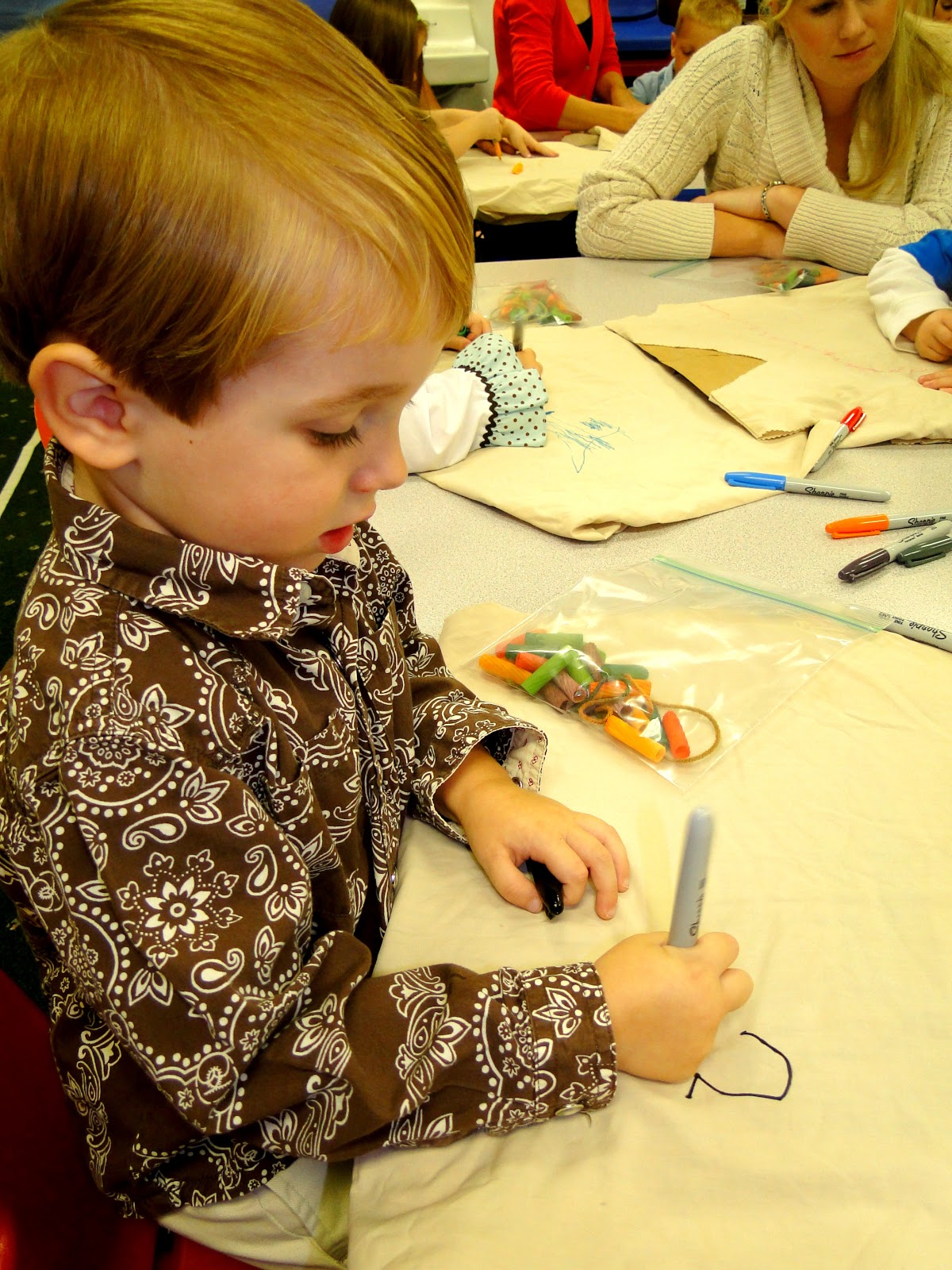 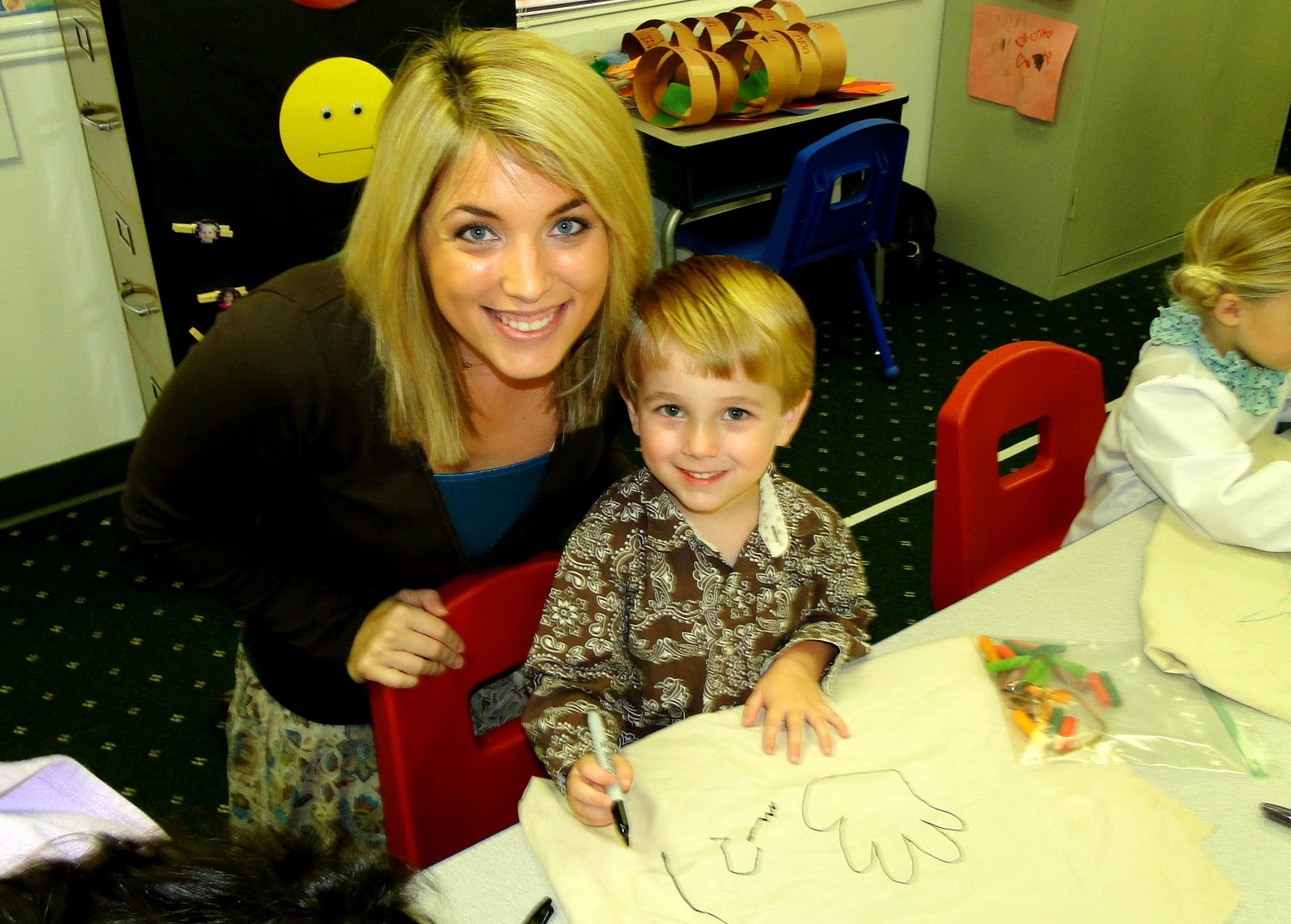 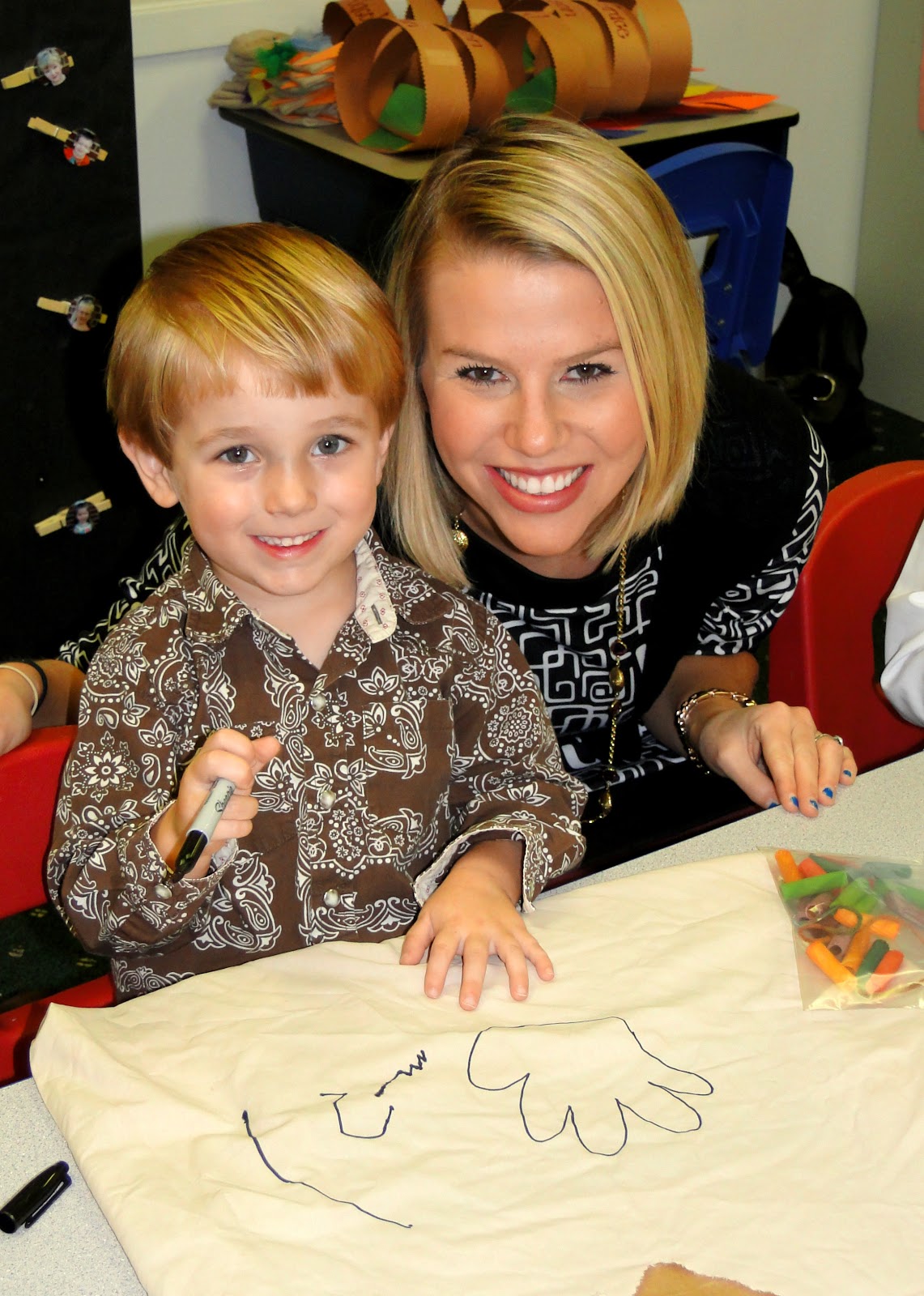 That hand still cracks me up! 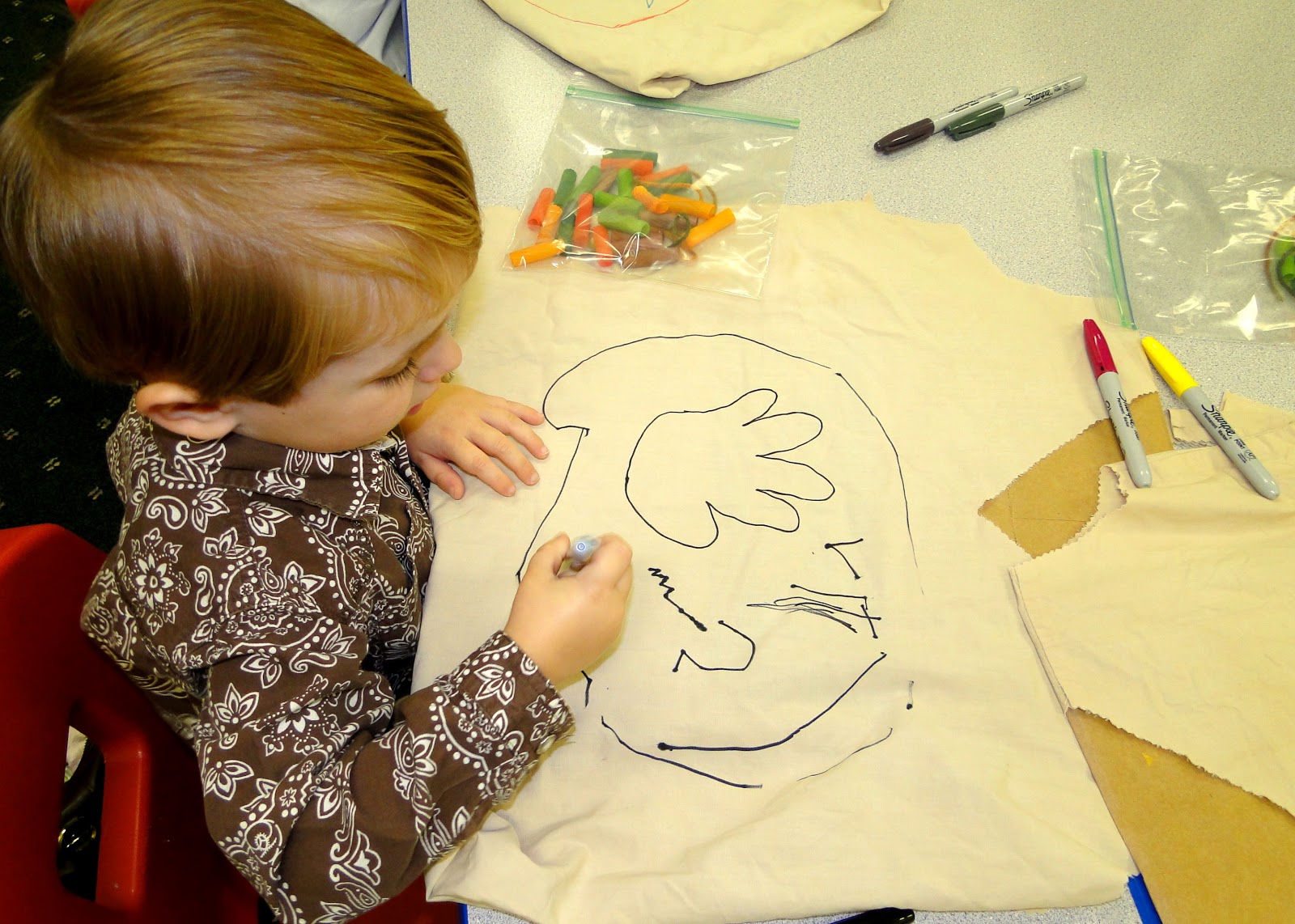 Payton working on hers 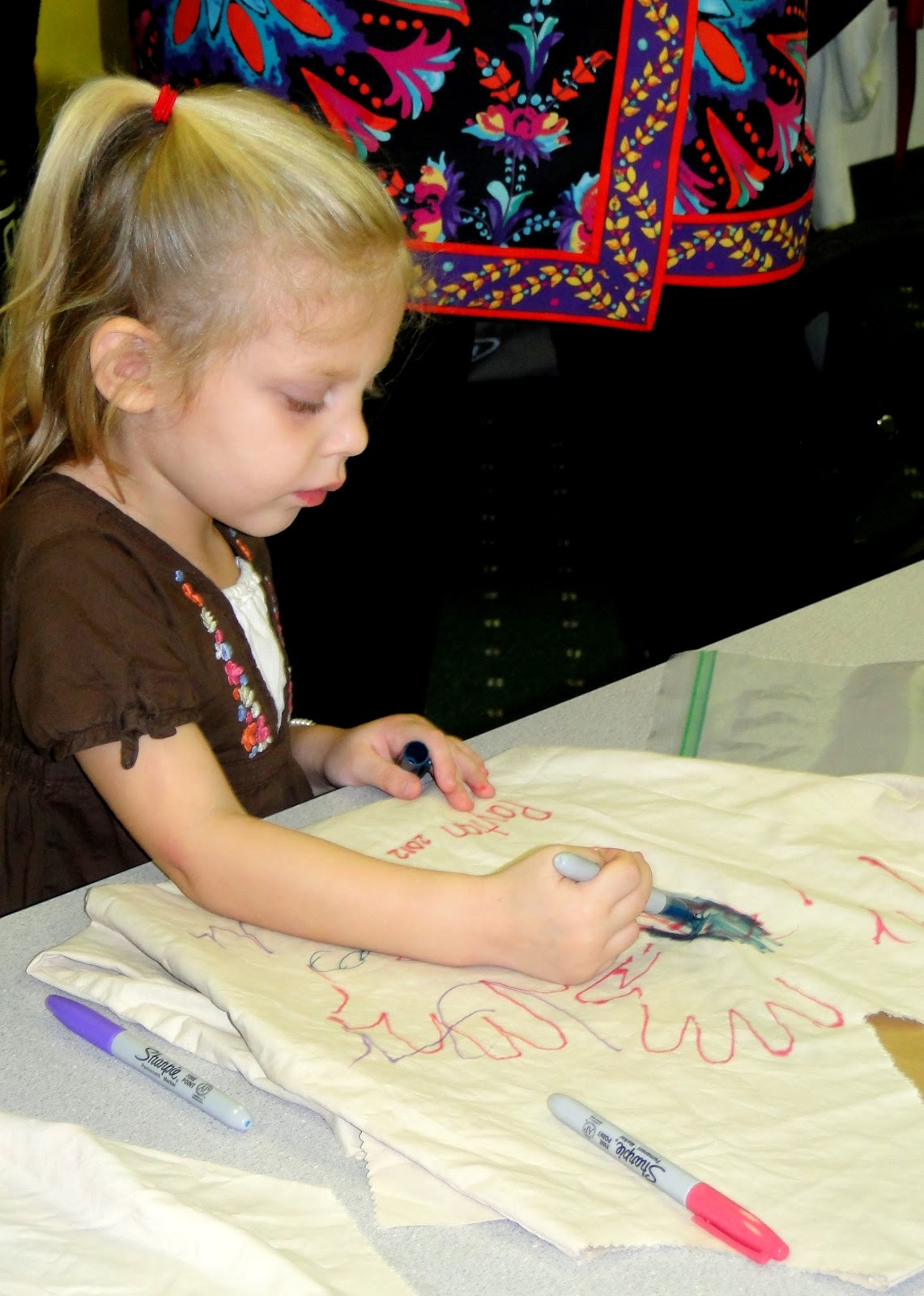 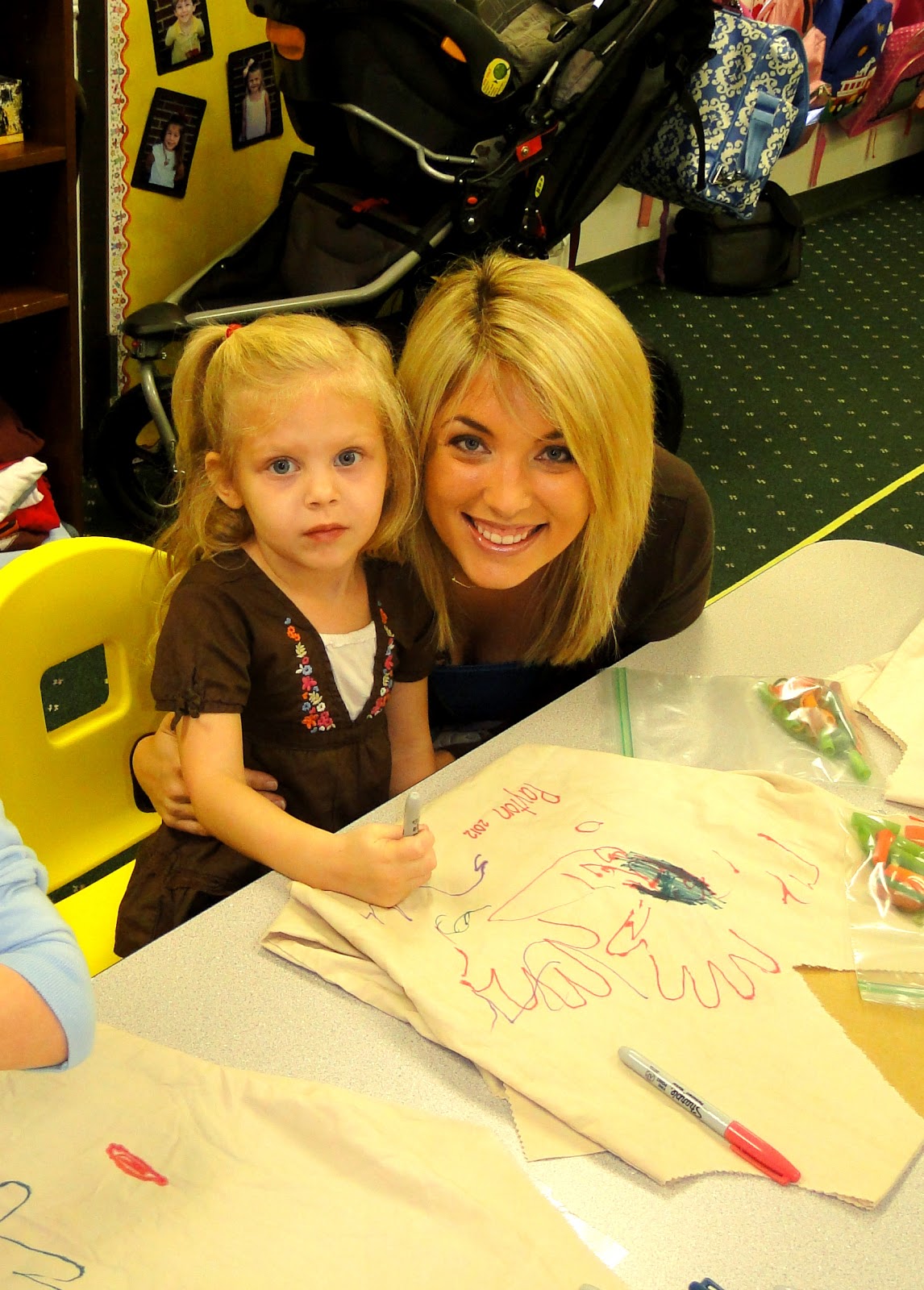 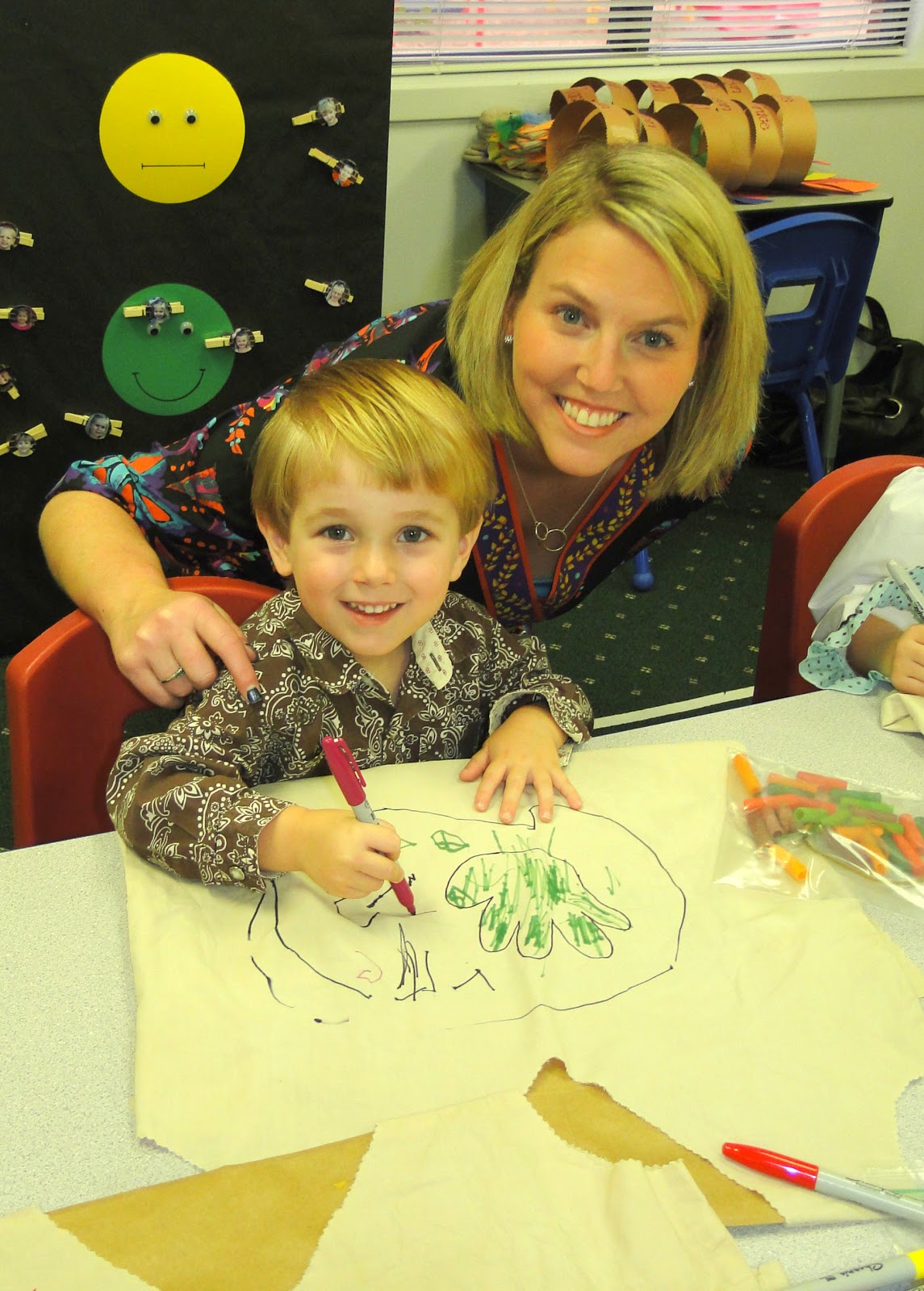 Another girls Mommy wrote “hoot” on her outfit and Kye copied it! Pretty good skills! 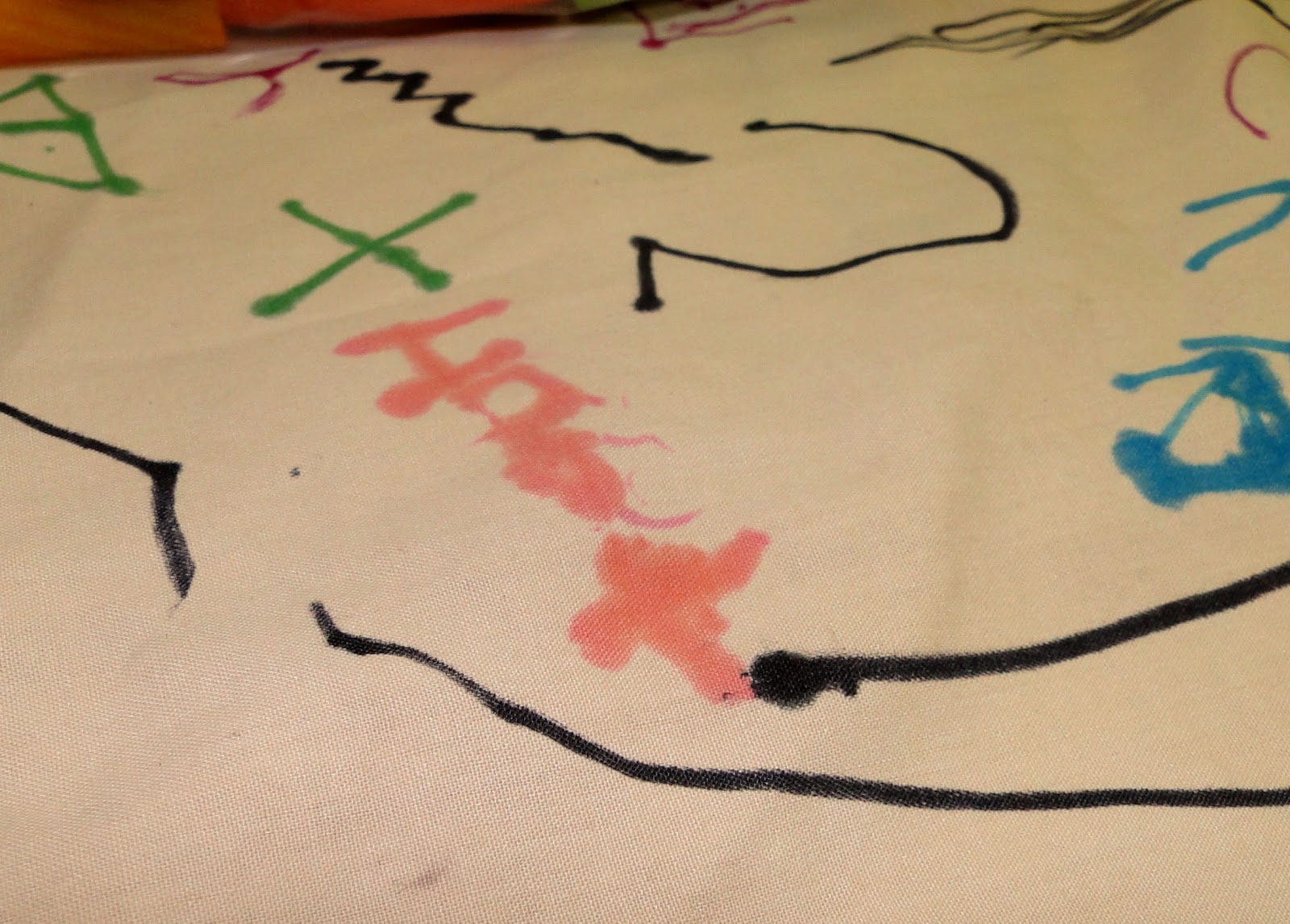 We also made macaroni necklaces 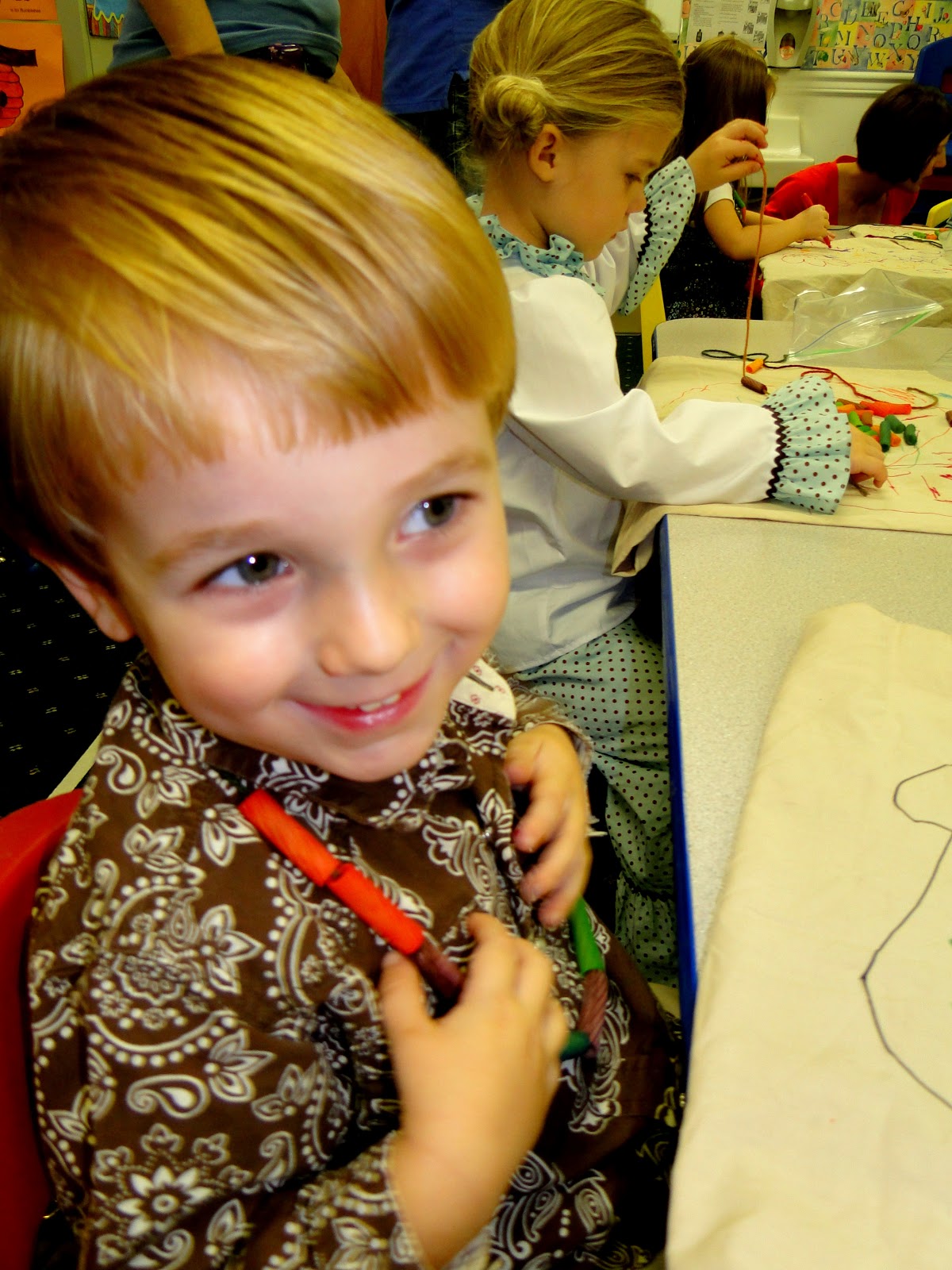 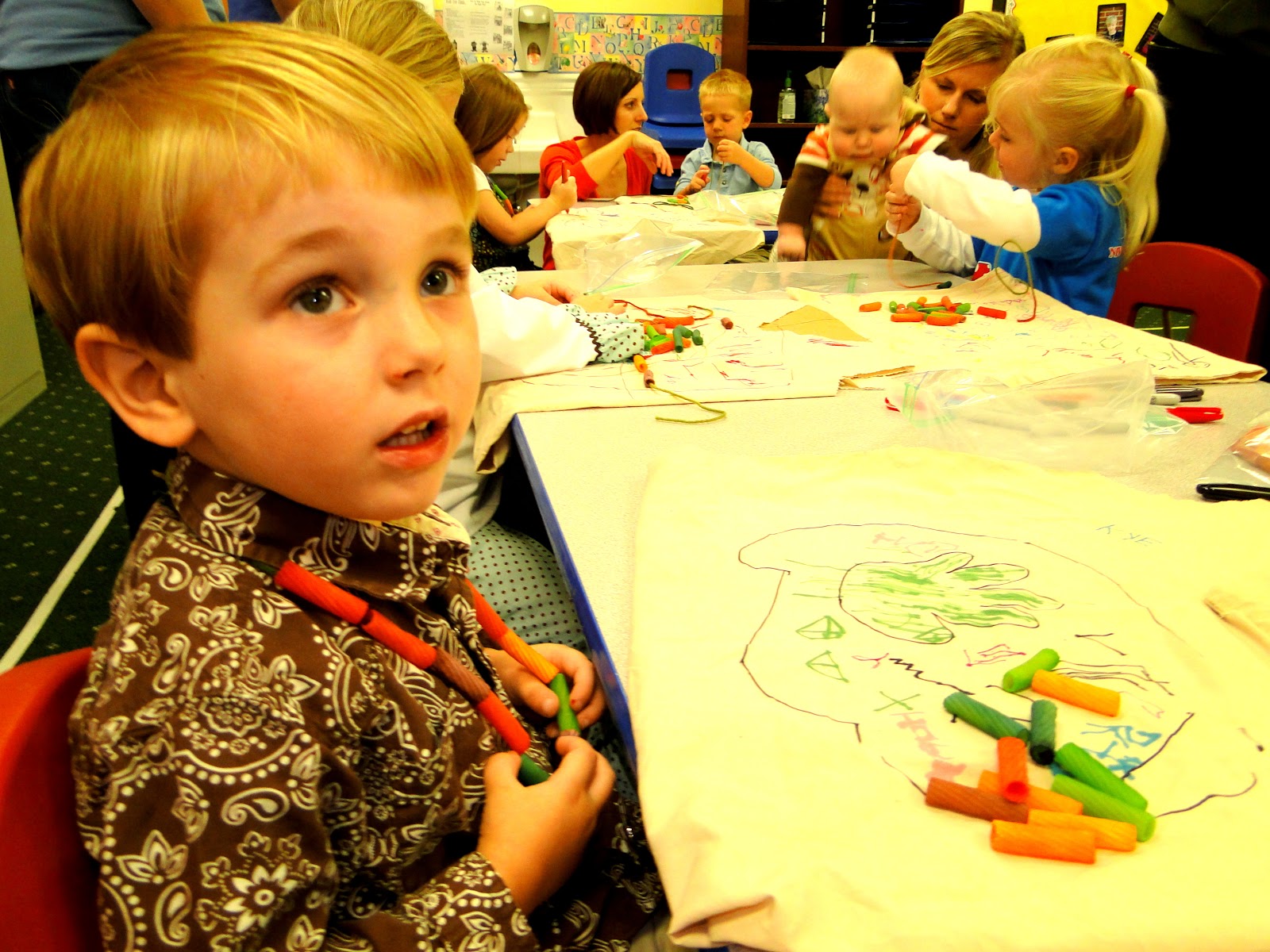 Trying to get a cousin picture together…doesn’t Payton look like she’s pretending to be an Indian Chief? 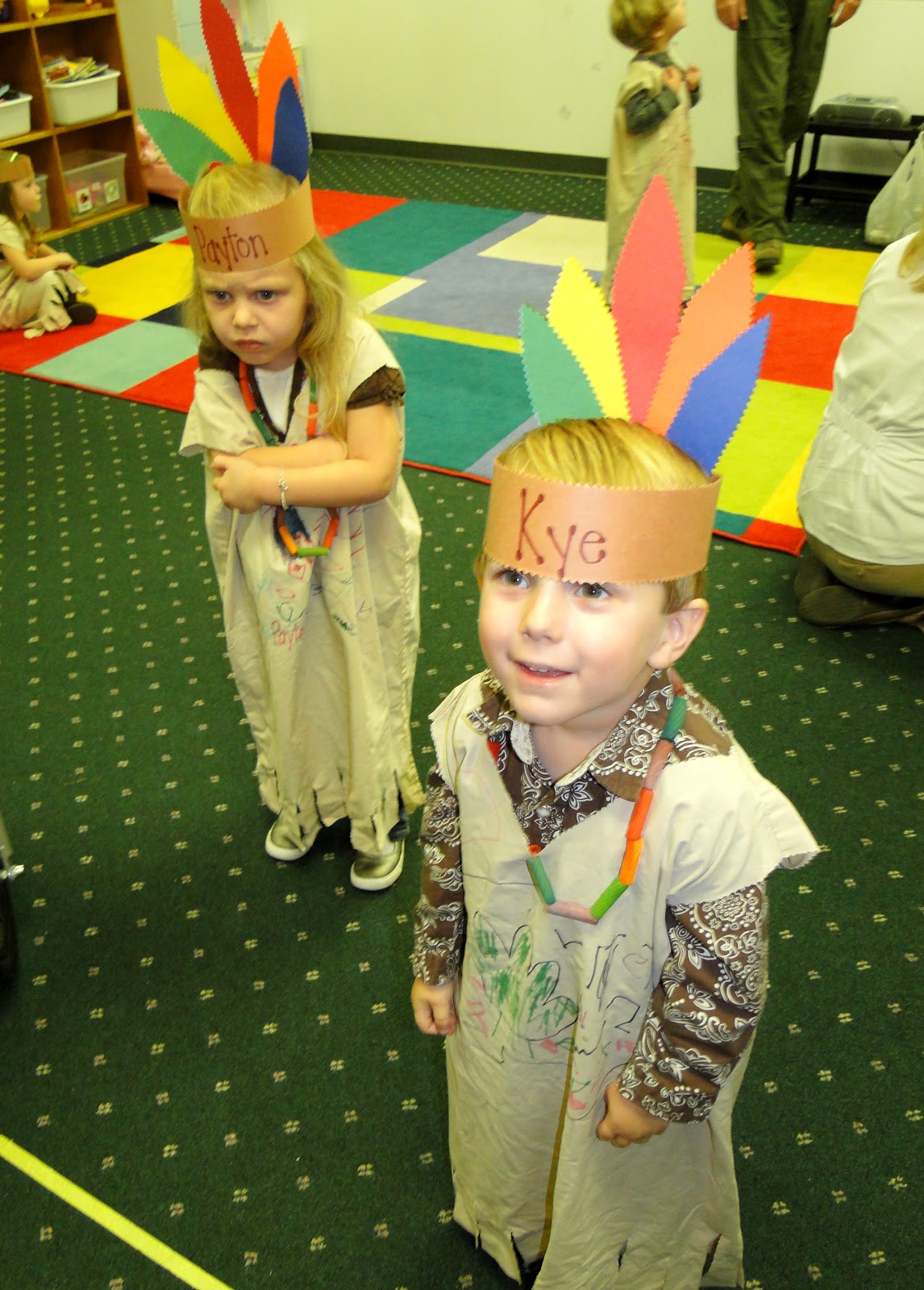 Tell me this isn’t ADORABLE?!?! 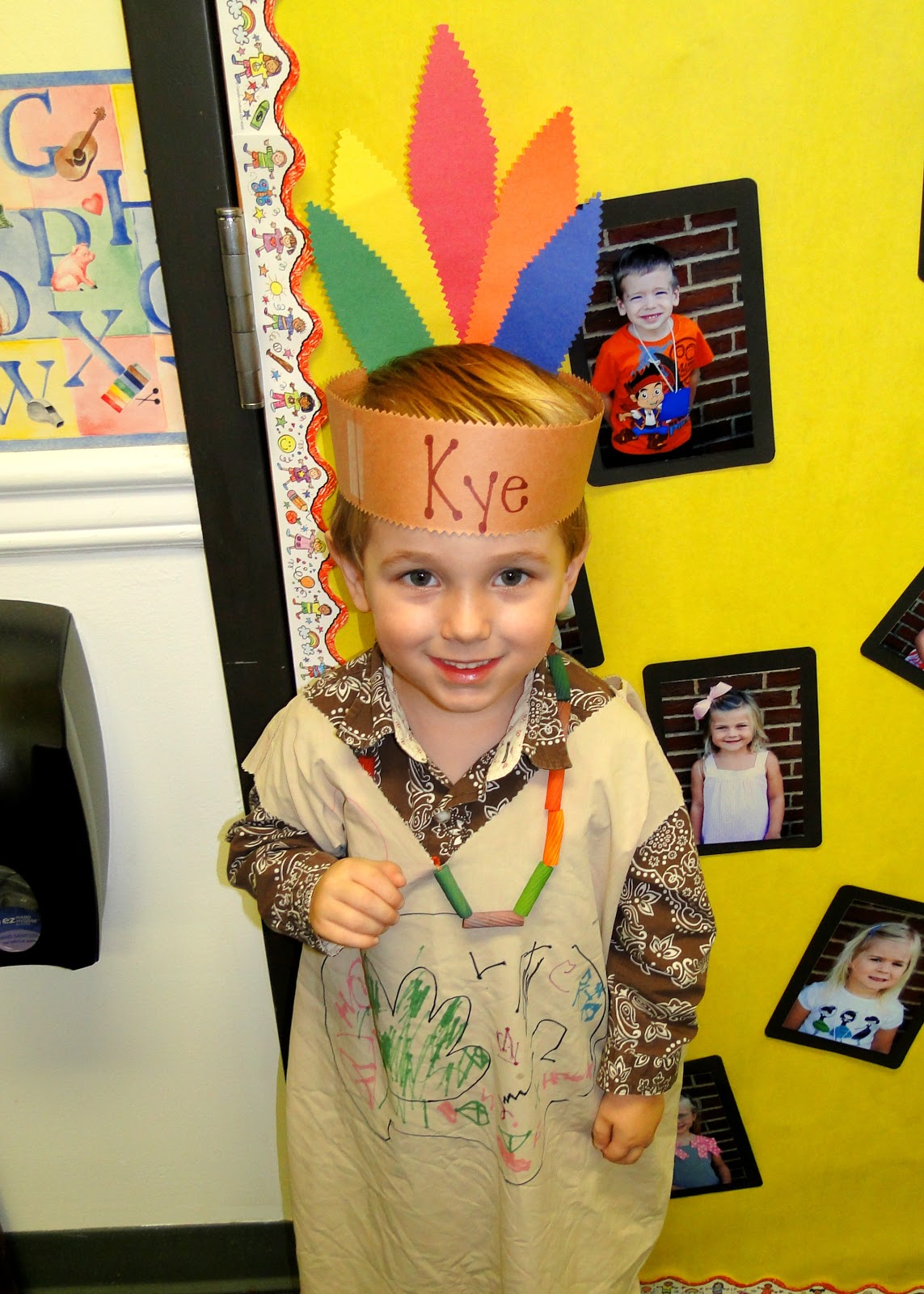 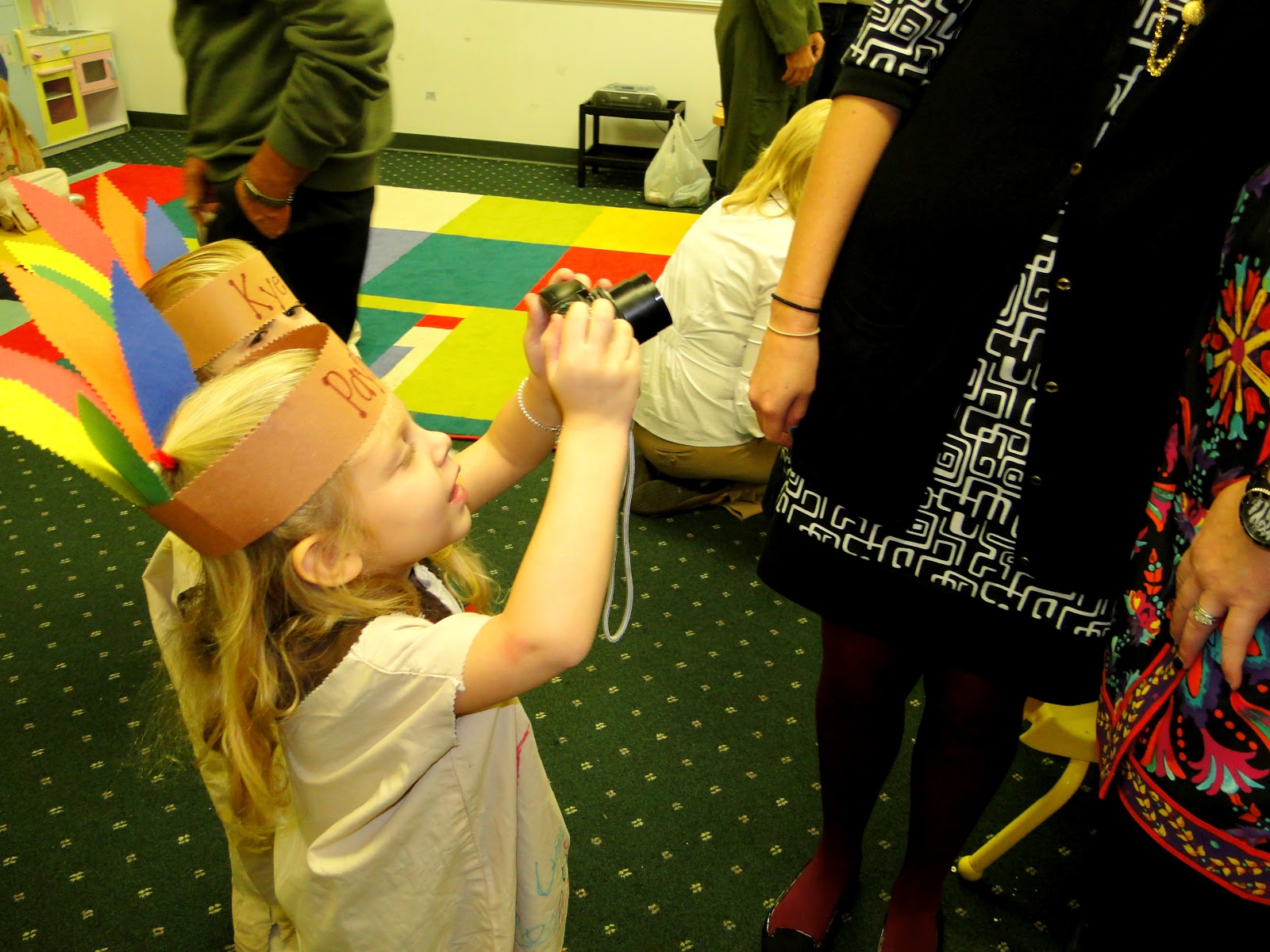 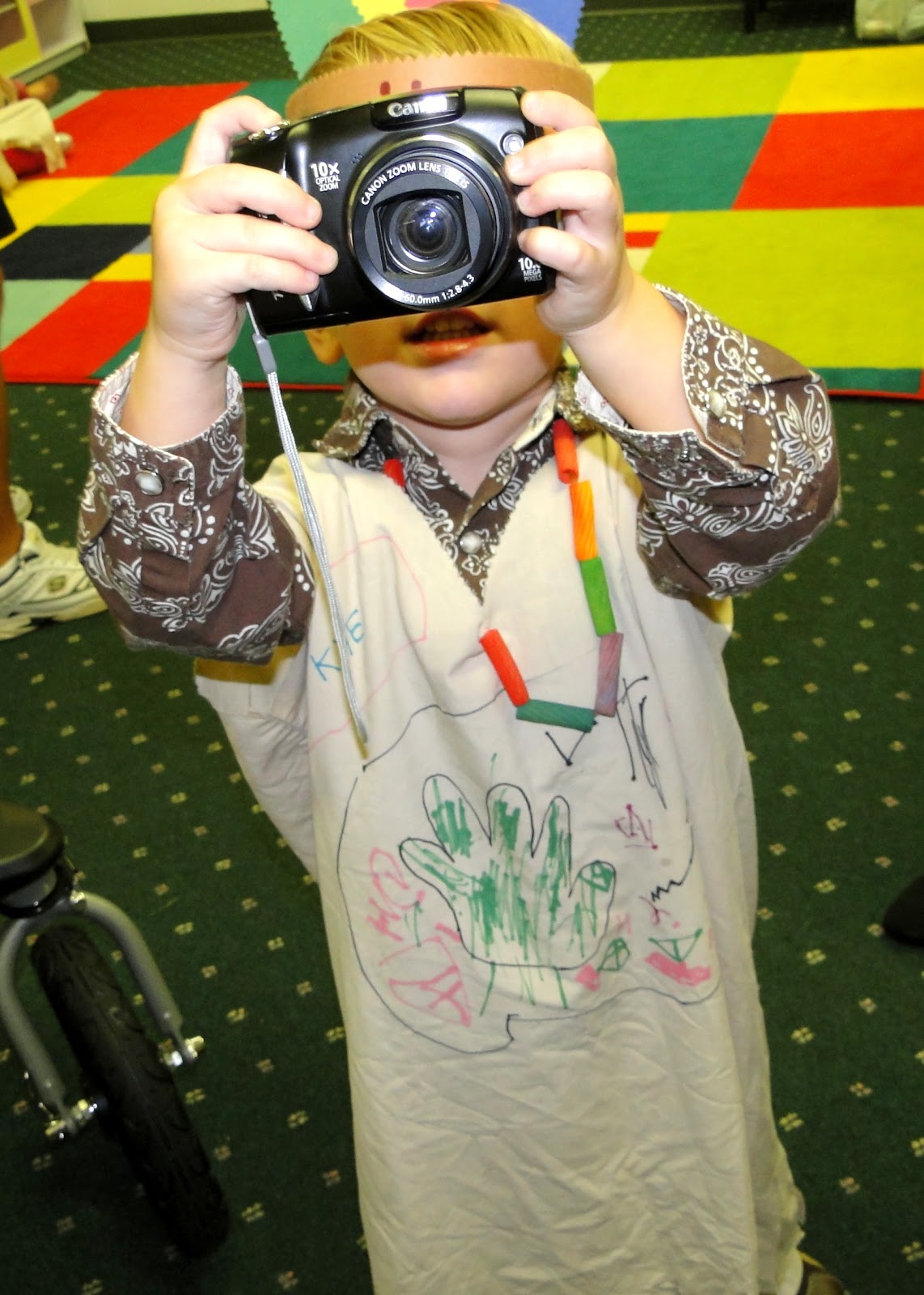 I’m so so thankful I got to be there and was able to spend quality time with Kye! Many siblings were there and I felt bad that the parents couldn’t get the quality time with their children who were students in the class. It’s TOUGH when you’re trying to hold onto a squirmy toddler to give your preschooler your full attention. I’m super super blessed that Mrs. Charlotte could keep Britt for me! 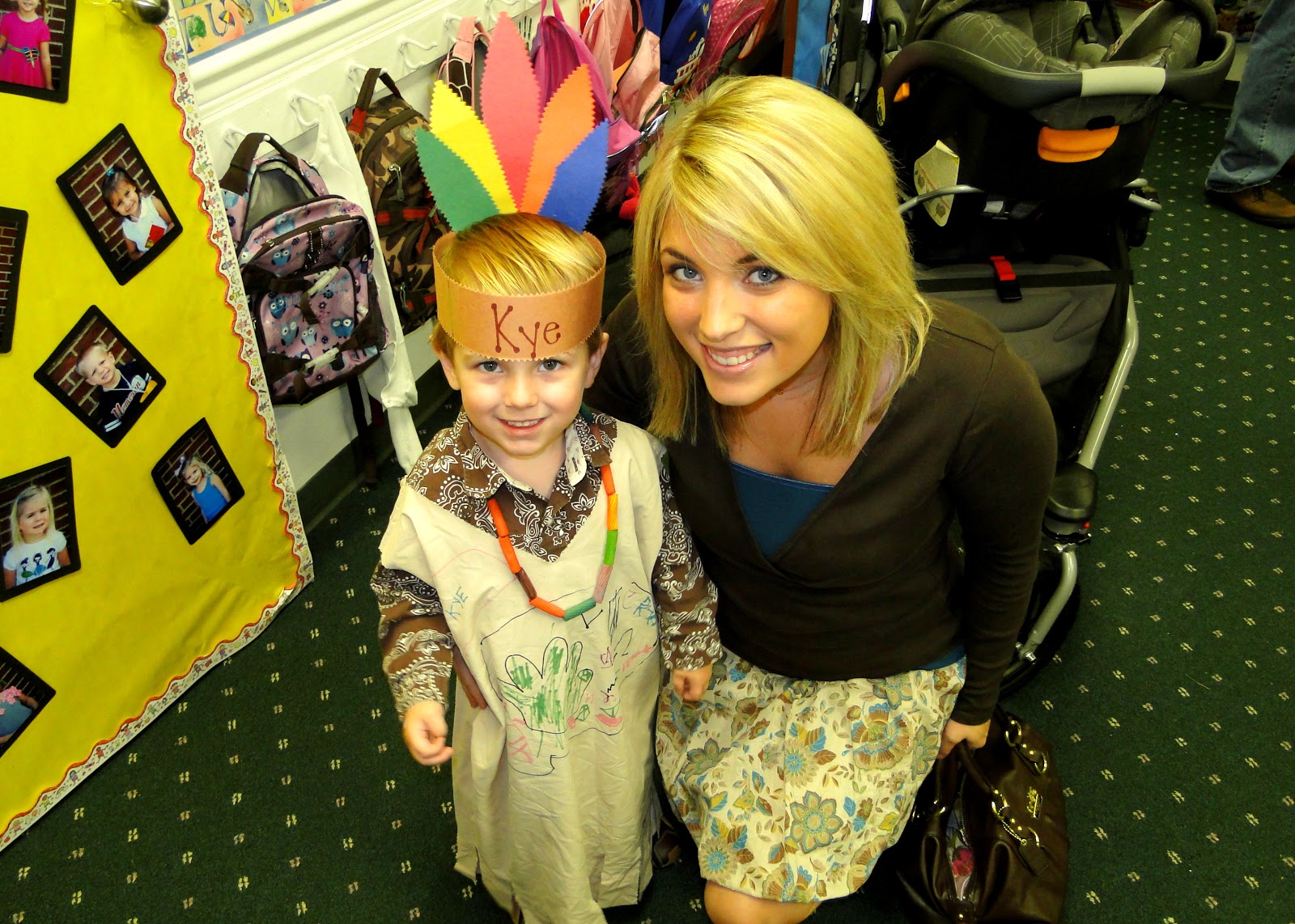 Ready to put on their little show! 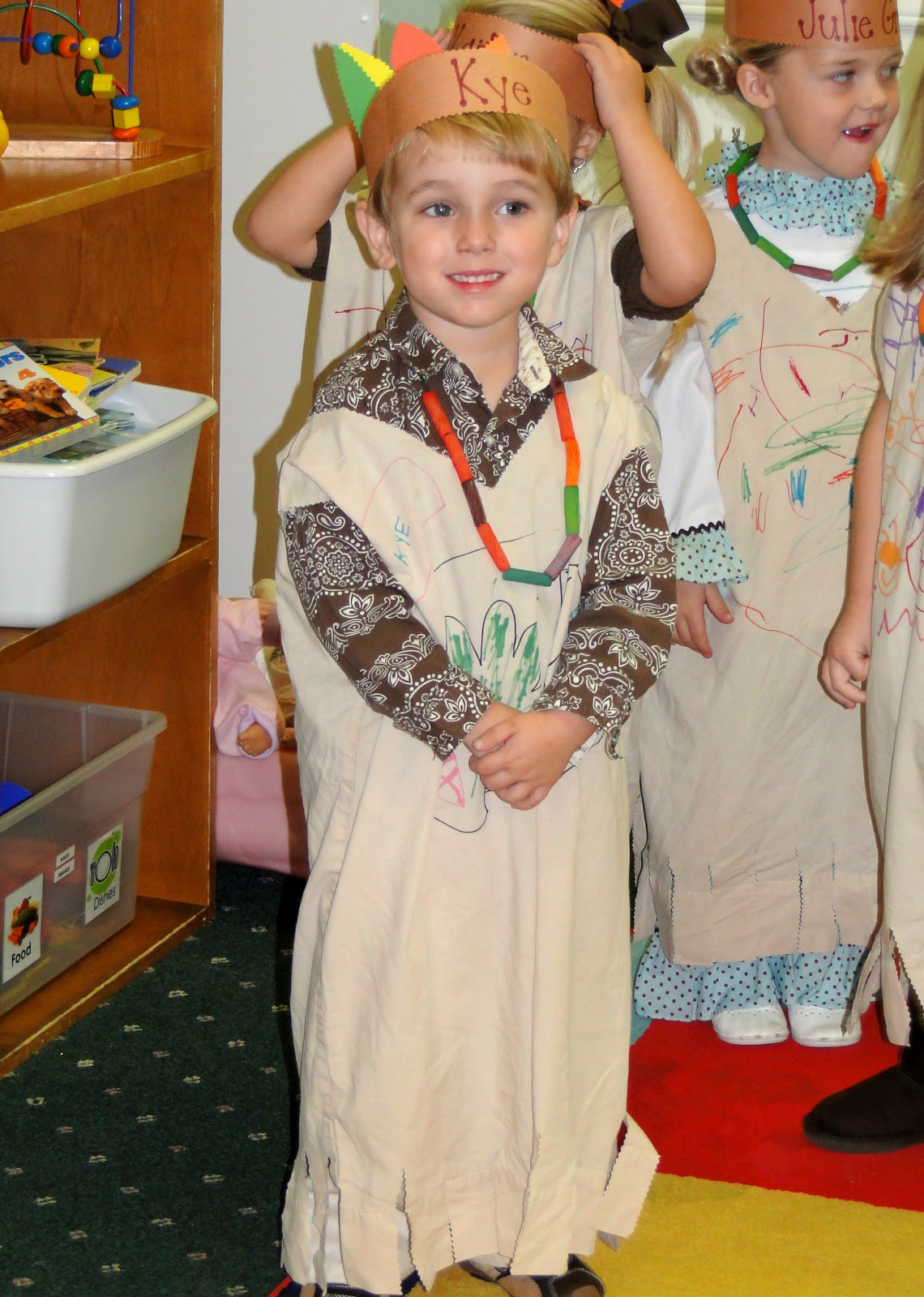 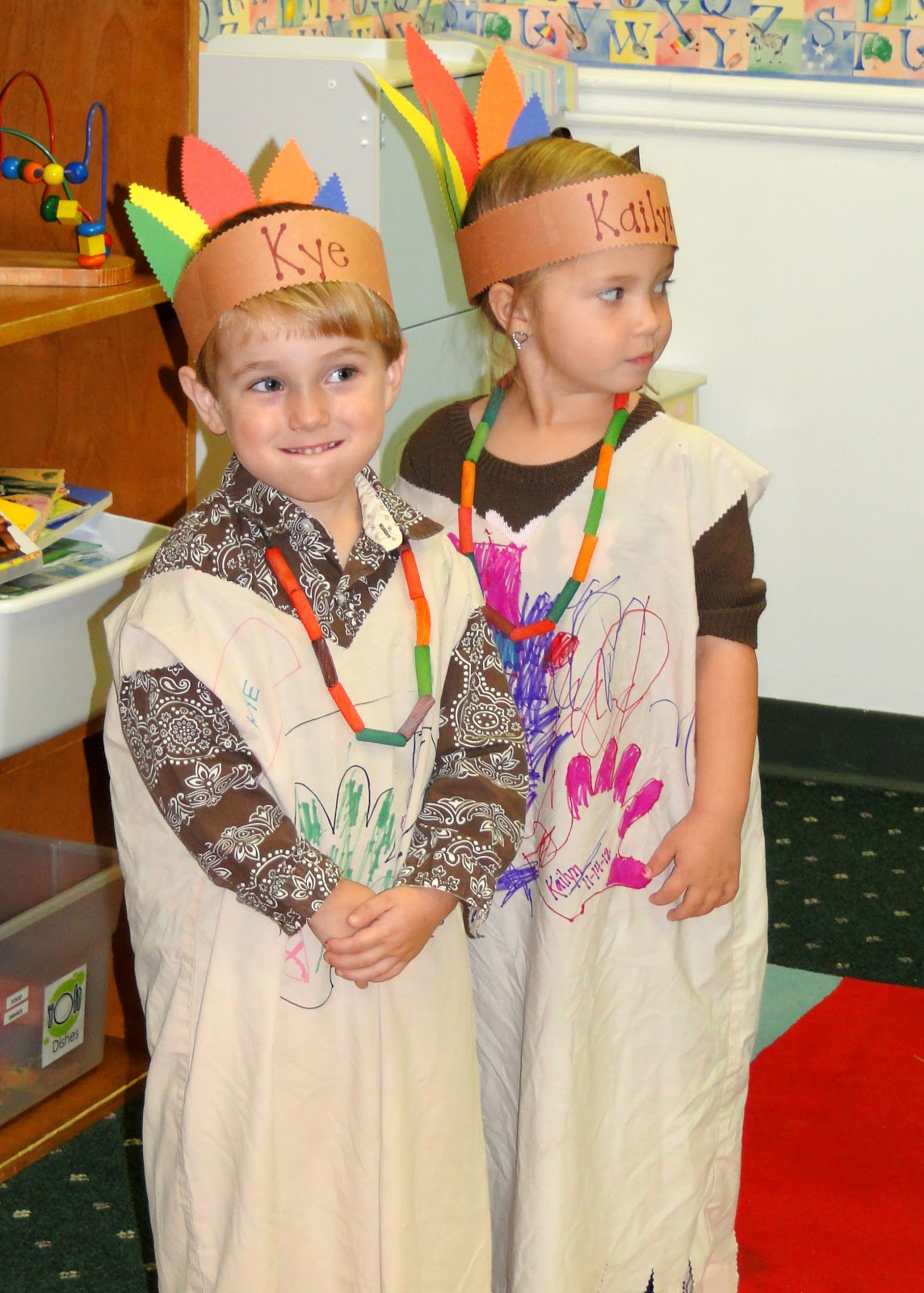 HERE is one video of their little class show (singing Mr. Turkey-O) and HERE is the other video…Casey was def having political correctness issues with the whole Indian outfit and 10 Little Indians song haha I also noticed when watching these videos that Kye is the shortest kid in his class huh? 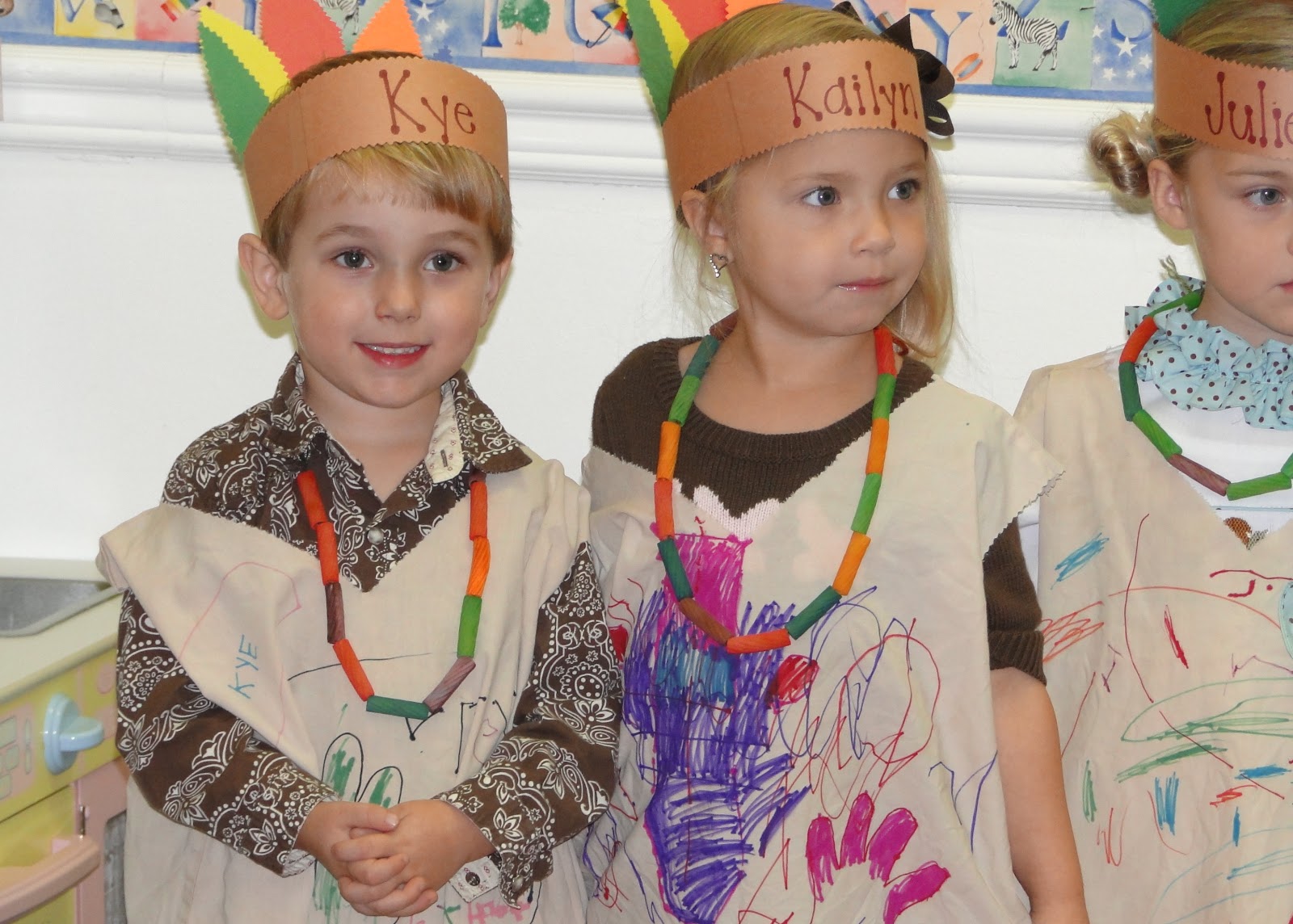 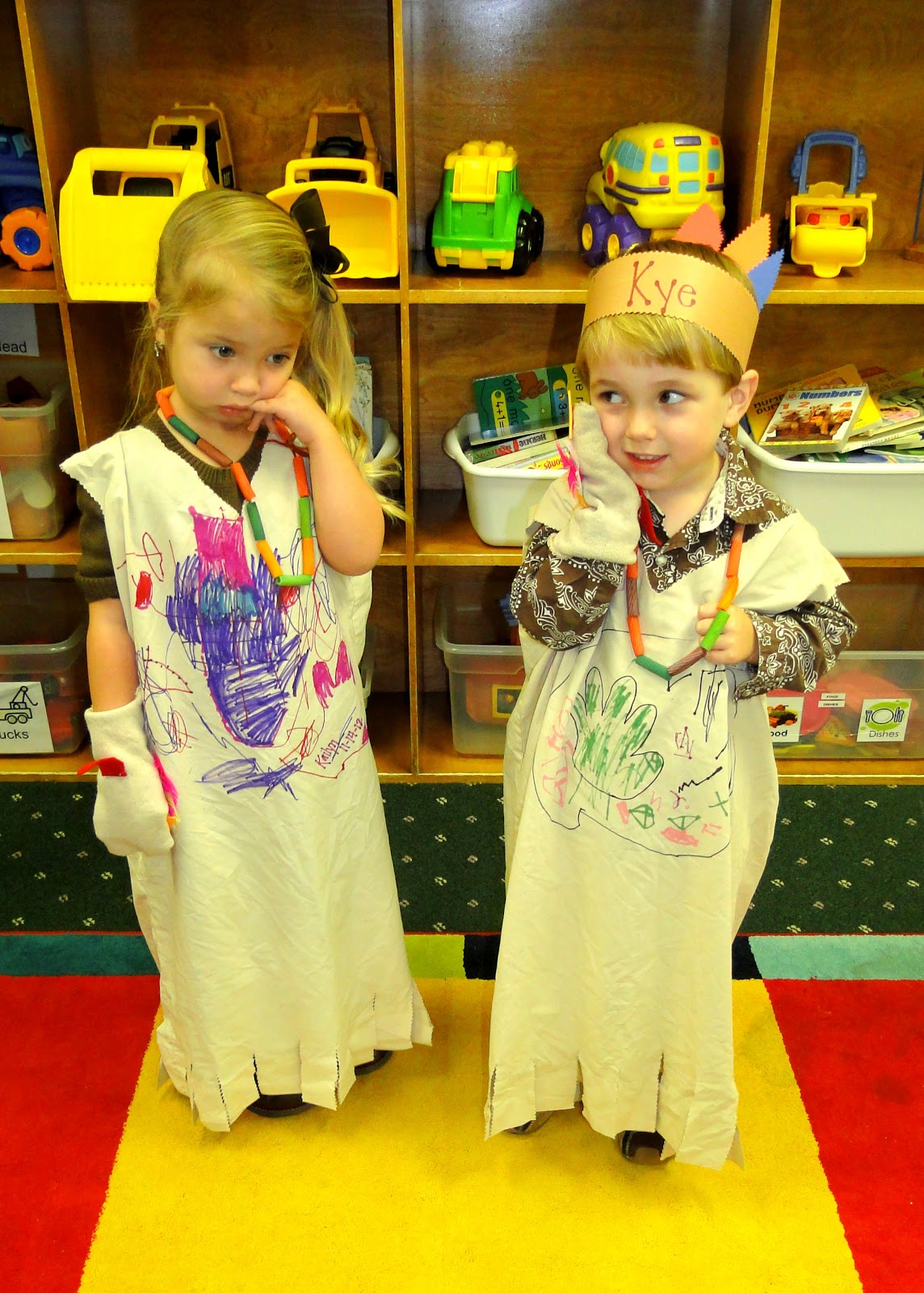 It got a little crazy because SO many parents had two kids at school they were trying to see. So we ended up going to another area at the school with a stage and both of the three year old classes were together to do their show! HERE is a video of that, I especially enjoyed the child who just stood there SOBBING 🙂 It’s funny because I had NO CLUE what they would be doing this year for the show/activities/etc. Kye didn’t tell me ANYTHING. Last year I knew every detail before the day happened…guess he’s growing up, huh? 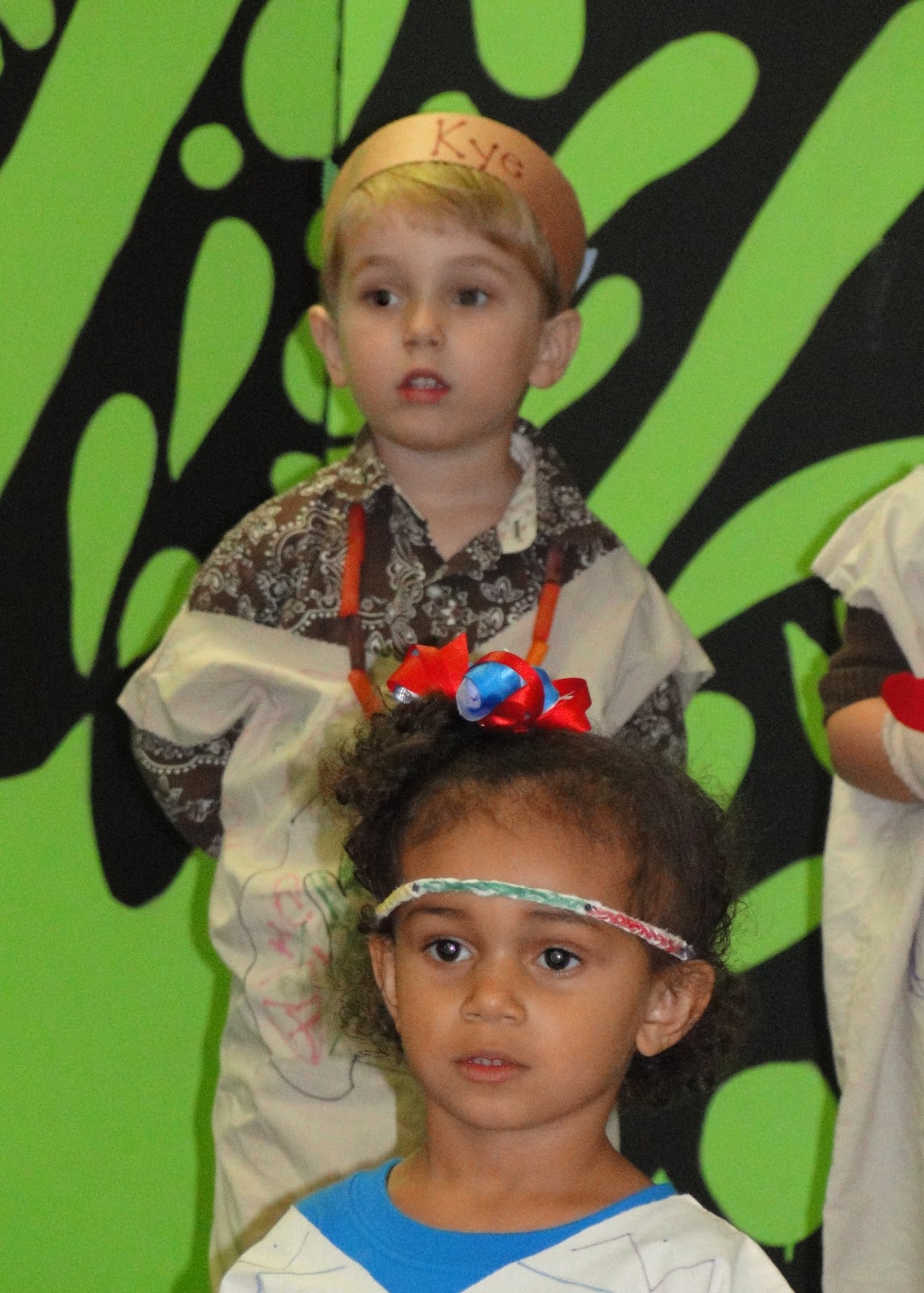 After the second performance we headed to another location to eat lunch. It was such a nice set up with cute little crafts the kids had made at each place setting. We sat with Kailyn and her mama (sweet Jessica!). I sent Zach a picture of Kye at the lunch and said we wished he could be there with us and he sent back a picture of himself working so we pretended like Daddy was there 😉 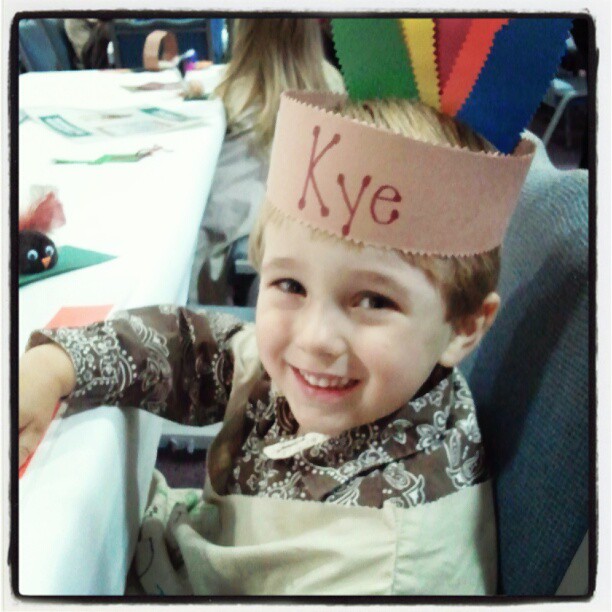 We were PUMPED for the food and kept talking about how it was a FEAST. Our favorite song in the car at the time was “Be Our Guest” from Beauty and the Beast so we kept singing that song while we waited for our turn to get food. It was all SUPER yummy and it was nice just taking our time and visiting together!

Showing off all the crafts he made for the big event 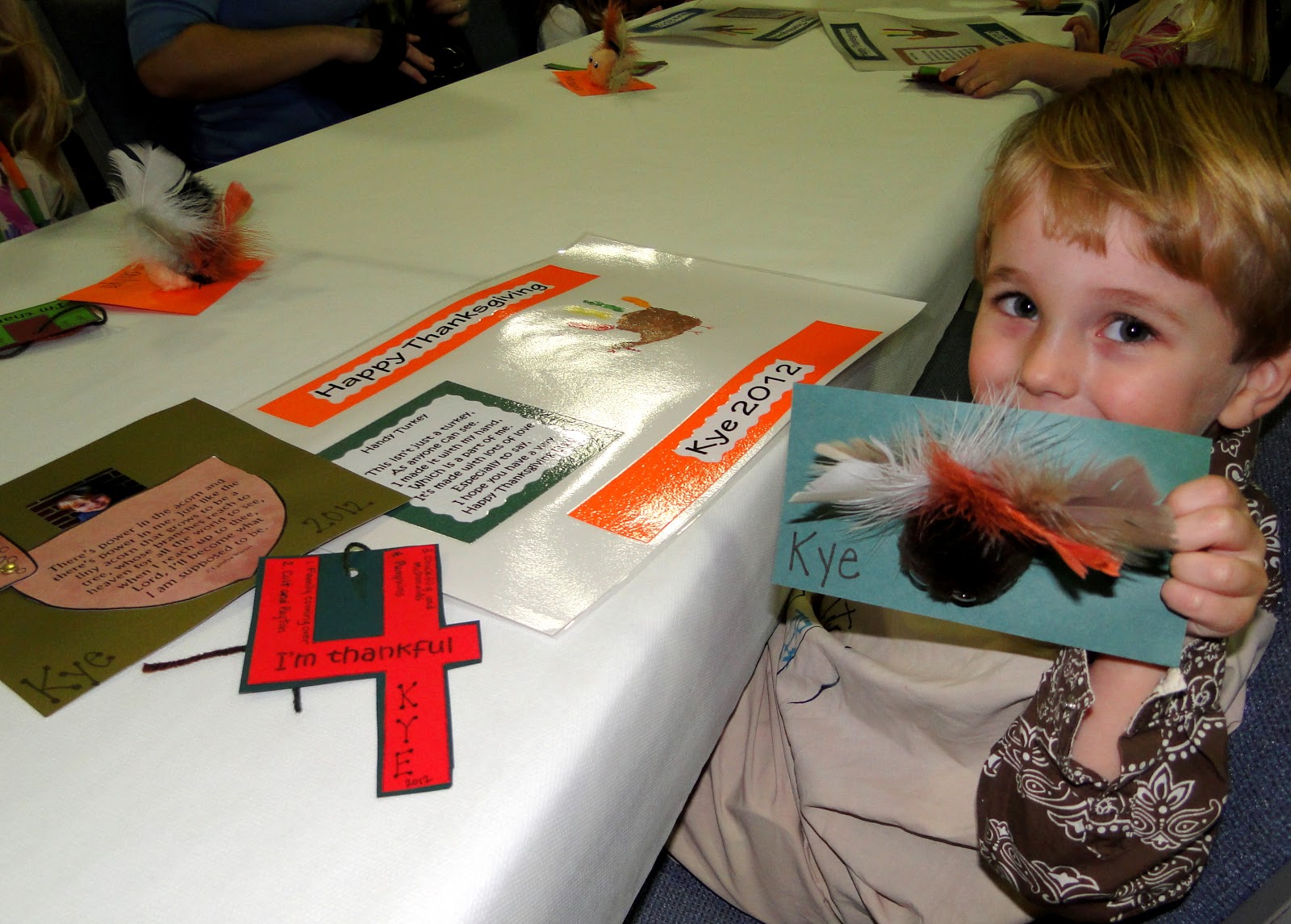 What Kye is Thankful for:

So first off…we RARELY even eat Chick-Fil-A but McDonald’s? Kid hasn’t had that in MONTHS. Secondly…pumpkins?!?! I mean it took me over 3 HOURS without ANY pain meds to push this kid out of me and he’s thankful for pumpkins? Thirdly…Kailyn was thankful for: God, Jesus, her parents and her sister. Either someone trained her on what to say or she’s just THAT good 😉 haha. Seriously though…I LOVE that they do this at school and I love Kye’s funny response b/c I know it’ll be something we’ll always giggle about 😉 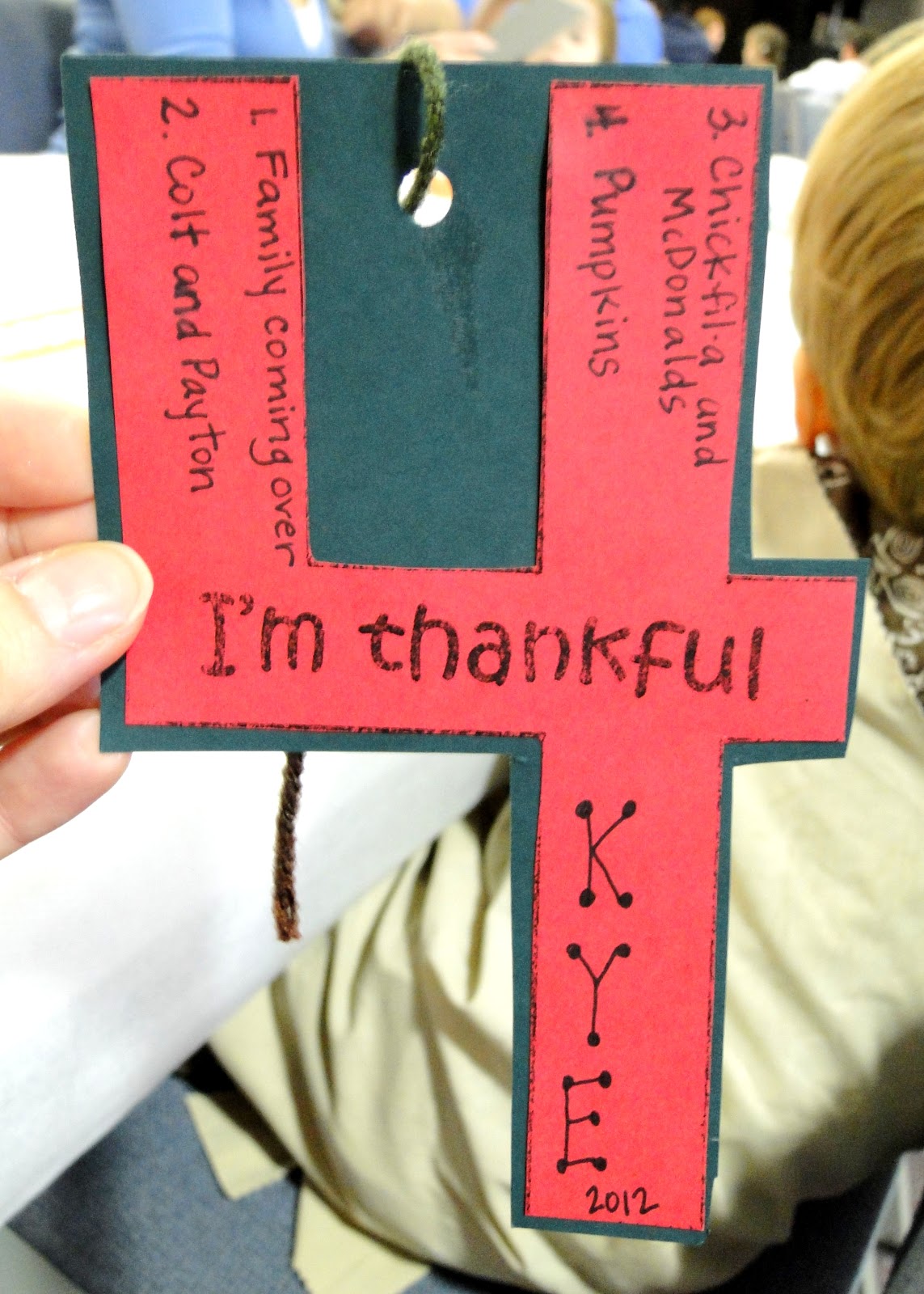 It was a SUPER great time! Afterwards we went back to Mrs. Charlotte’s and picked up Britt then headed home for naps. When I was tucking Kye in for his nap he hugged me and said “thank you so much Mommy for coming to school with me today.” It was precious and made up for the lack of being on his what he’s thankful for list haha 😉 You can look back and see last year’s Thanksgiving event HERE!